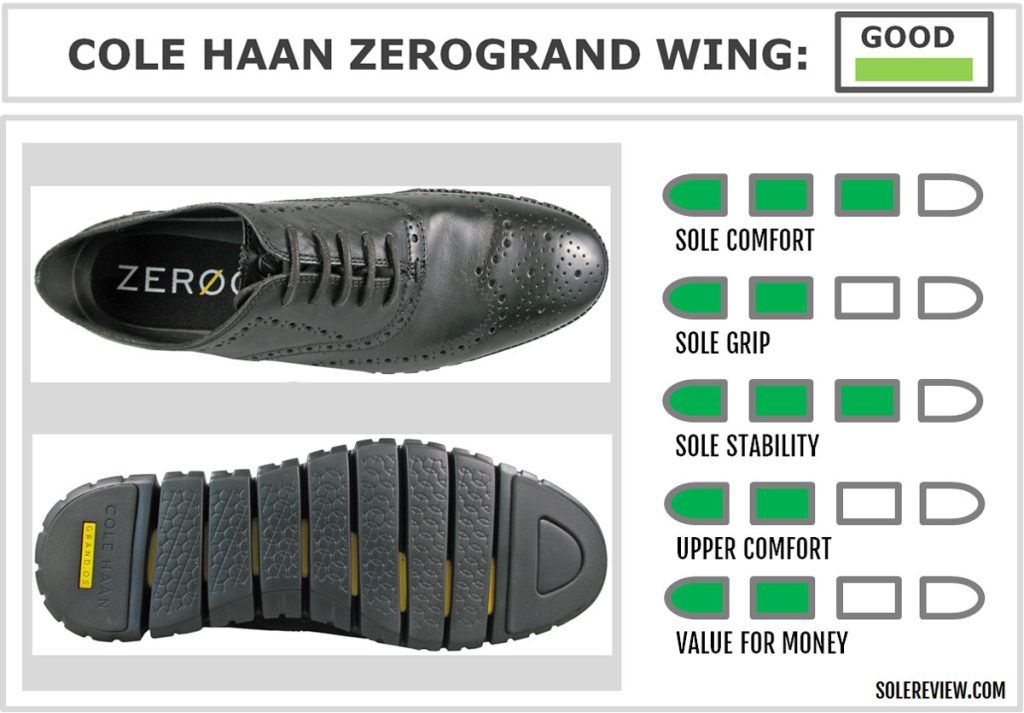 Cole Haan’s marketing pitch: One of the lightest casual shoes to hit the market.

Outsole: EVA foam with rubber inserts under the heel and forefoot.

Insole/footbed: Semi-removable insole with a fabric lining. It has a very thin forefoot, so inserting an orthotic will decrease upper space.

Airport-friendly: No, the upper has metal eyelets.

The Cole Haan Zerogrand is one of the lightest dress-hybrids around, thanks to its Nike Free-inspired midsole design and a lightweight upper.
Cushioned and supportive midsole, flexibility, no break-in period, very lightweight
Outsole traction, slightly over-priced, average fit and finish.

The Cole Haan Zerogrand was purchased at full retail price for our review. 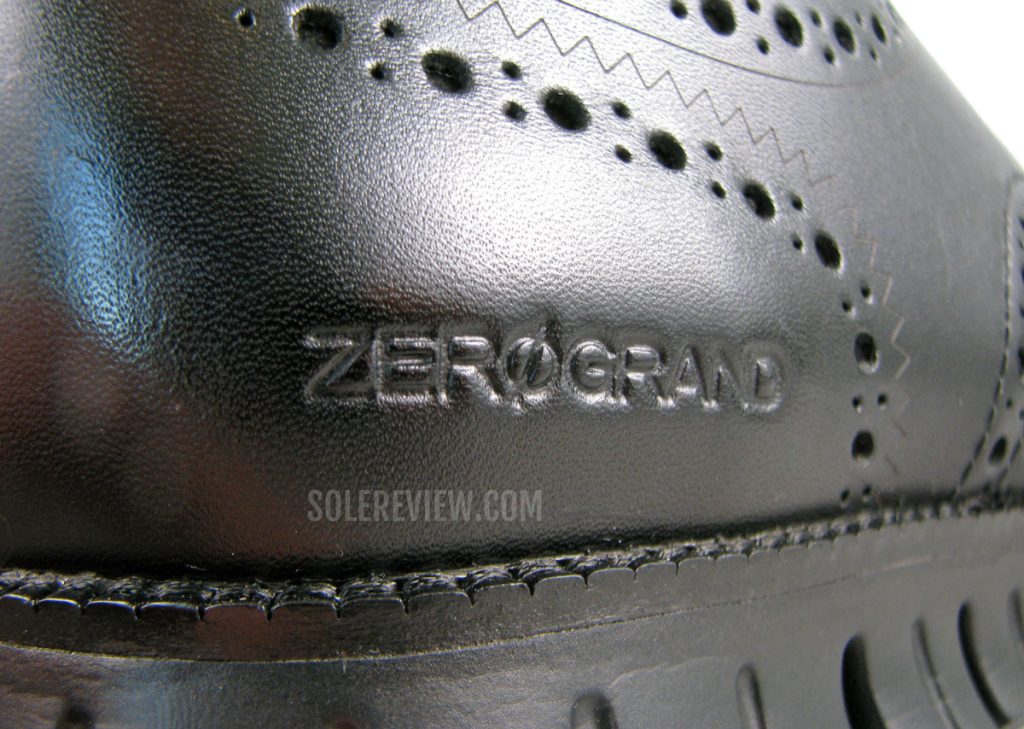 The Cole Haan Zerogrand is inspired by the Nike Free.

Our review of the Cole Haan Originalgrand expanded on Nike’s past relationship with the brand, and how their running shoe best practices had a lasting influence on Cole Haan’s design language.

Just like how the Originalgrand was inspired by the Nike Lunaracer, the Cole Haan Zerogrand is based on the Nike Free.

The Cole Haan Zerogrand’s midsole is based on the flexible Nike Free platform.

Today, Nike Free isn’t as hot as it used to be. Its peak was over a decade ago, or at the height of the minimalist running shoe fad.

Its ultra-flexible and deconstructed design allowed the foot to bend ‘freely’ during the gait cycle. That was in stark contrast with the bulky running shoes that existed at the time.

Not many dress shoe hybrids have a flexible midsole with deep grooving. The Johnston and Murphy Holden Wingtip is a flattering take on the Zerogrand, but it’s nowhere as lightweight or flexible. 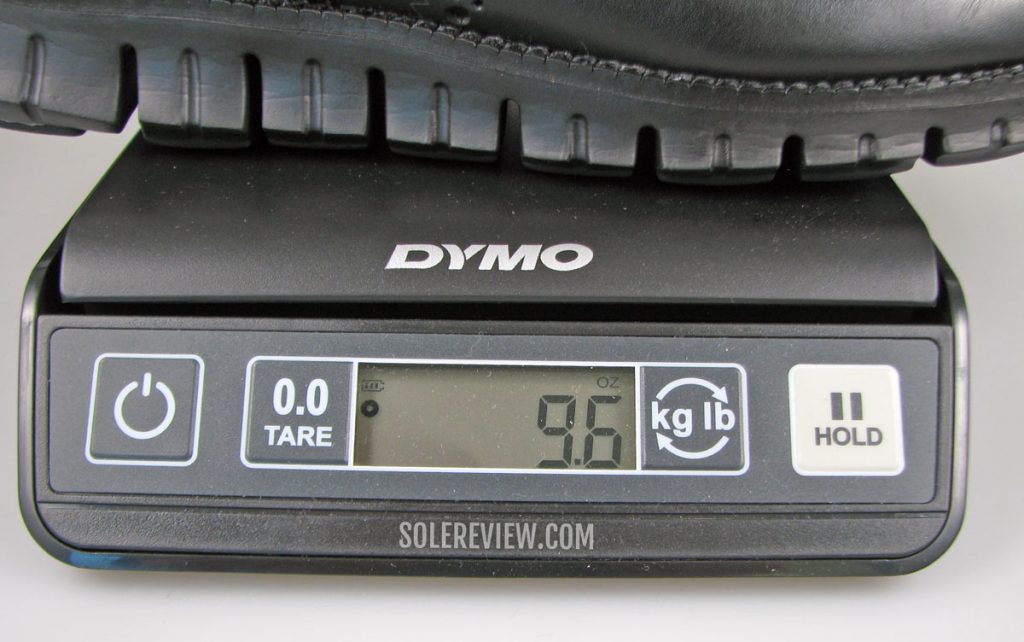 For a dress sneaker, a sub-10-ounce weight is impressive.

Being lightweight and flexible is the unique selling proposition of the Zerogrand. A size US 9 weighs a mere 9.3-ounces or 263 grams.

Even for a dress shoe-hybrid with a foam midsole, that’s very respectable.

We’re reviewing the all-black color today; the dressiest of all Zerogrand Oxfords.

THE SOLE DESIGN AND RIDE COMFORT

The outsole view of the Zerogrand gives us a good idea of what this shoe is about.

Unlike most midsoles with a solid core, the Zero-G has a generously articulated form factor that also gives us a glimpse of the yellow foam core. 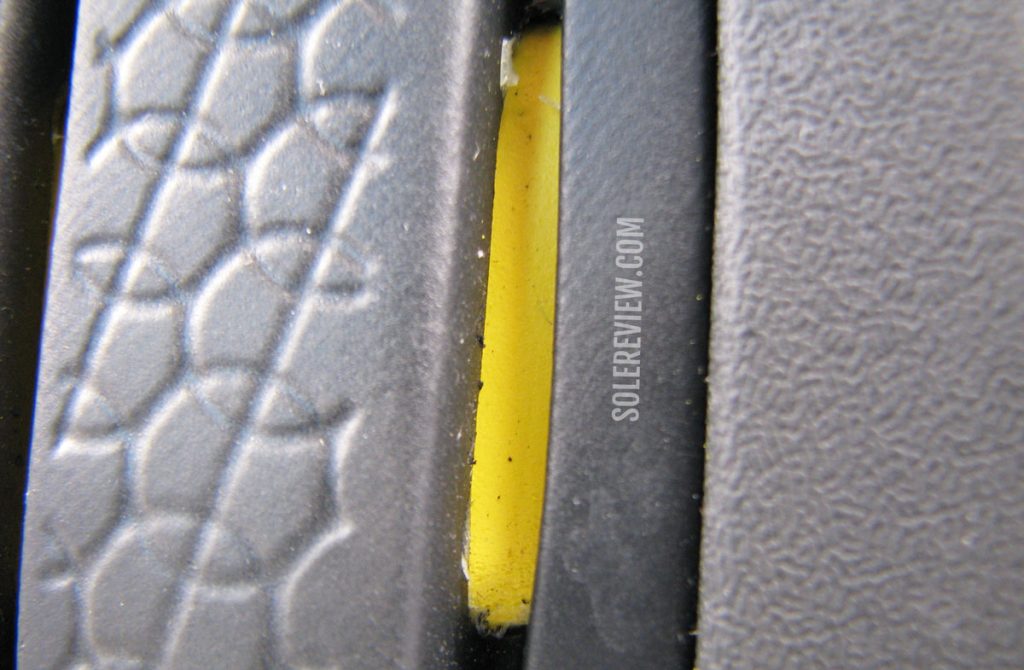 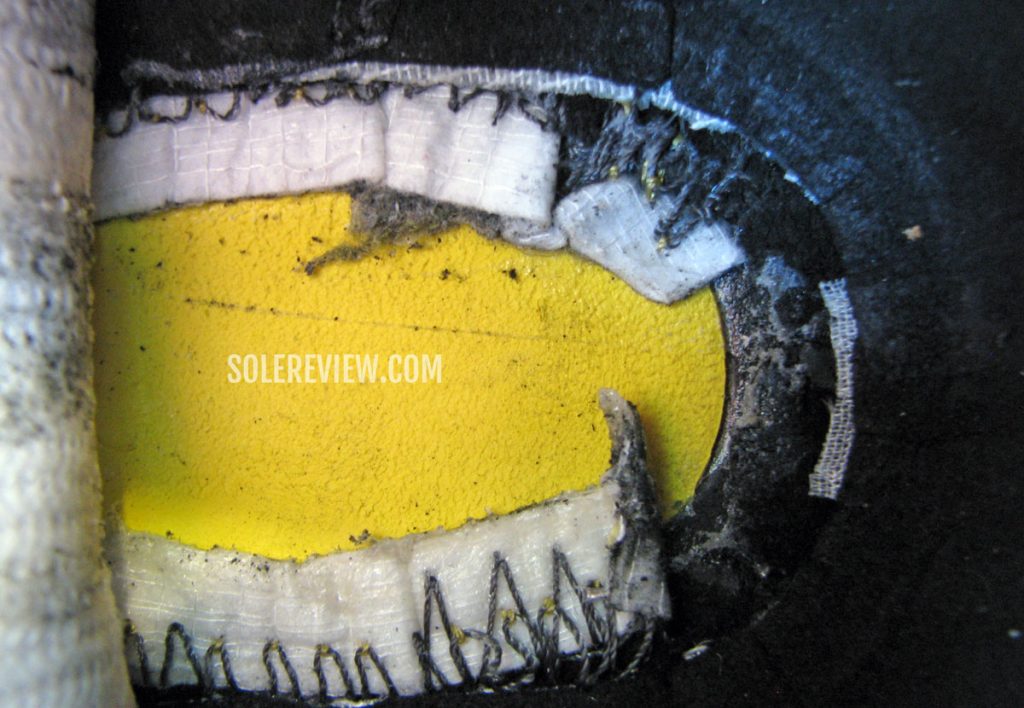 A second density of EVA foam is layered between the insole and midsole. The finishing is very messy, though.

The yellow foam insert is layered between the insole and midsole, and follows the loading path. It’s not very soft, and has a density that matches the firmness of the midsole.

It originates under the heel, and curves slightly towards the inner forefoot. That aligns with the weight-loading path during the gait cycle. 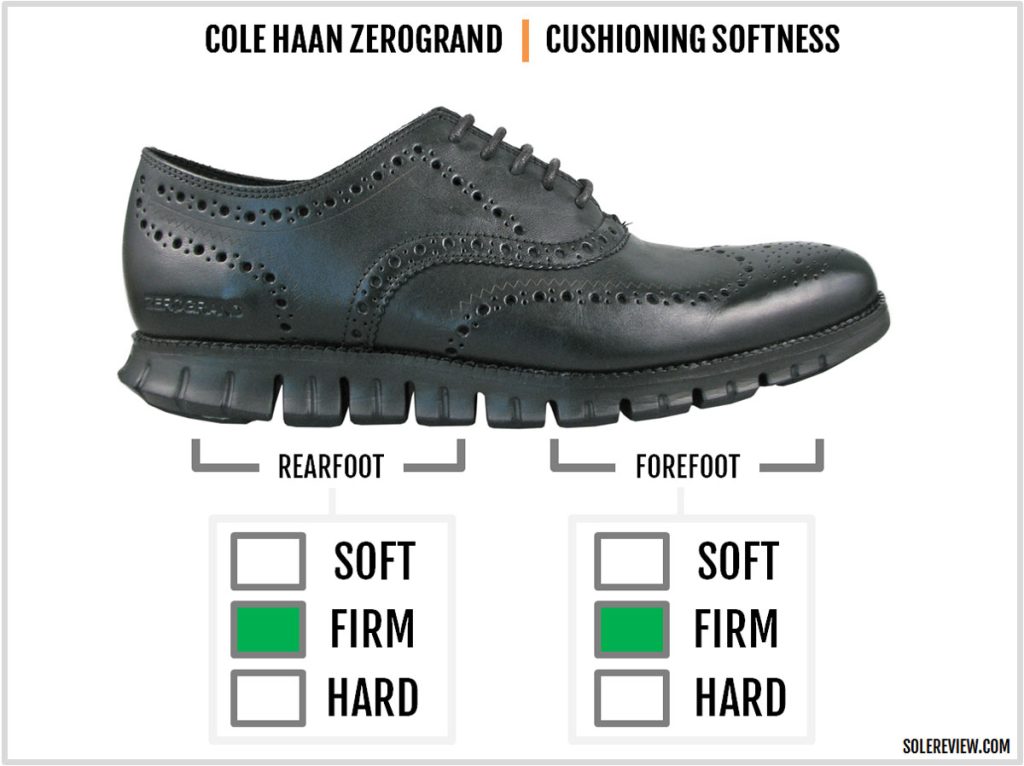 Looking at the dual-density midsole, it’s easy to assume that the Zerogrand has a soft ride. It does not; the midsole is firm from the heel to toe. That’s a nice problem to have, as the firm platform brings stability to the midsole. 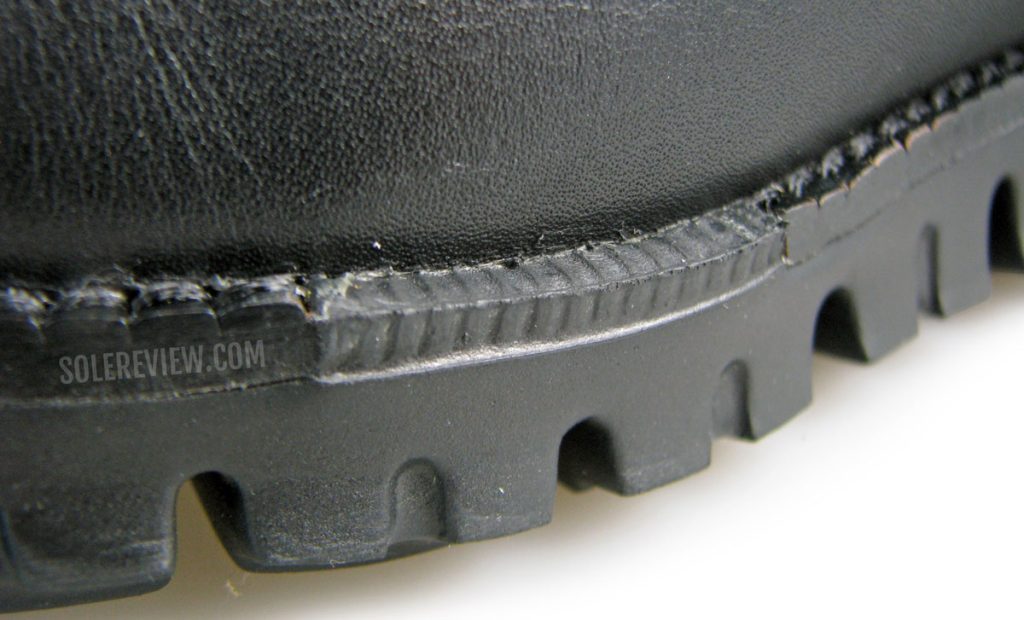 The faux welts have a ‘break’ for better forefoot flexibility.

Cole Haan describes the ‘welt’ on the midsole edge as ‘Storm welts’. From what we can tell, these are decorative welts and not a true welt that is stitched to the upper and sole.

For whatever it’s worth, the said welt has a break under the forefoot for better flexibility. The welts aren’t completely useless, though. Besides adding aesthetic value, the stiff layer helps with the overall stability.

Only 3/4 of the insole is padded with EVA foam.

The EVA foam frame is molded for arch support.

The insole isn’t very cushy either. It’s three-quarters padded, meaning that only the heel and midfoot have a frame made of EVA foam.

Just like the Originalgrand, the foam cushioning is missing on the forefoot insole.

The forward section has no padding at all. Thus, inserting an orthotic will be a challenge.

The insole is designed to be non-removable due to the glue tacking it to the lasting. Nonetheless, it can be removed with minimal effort. We don’t recommend replacing the sockliner with an orthotic due to the lack of forefoot padding.

If your orthotic happens to have a thicker forefoot than the standard insole, then that’s going to decrease the interior space. 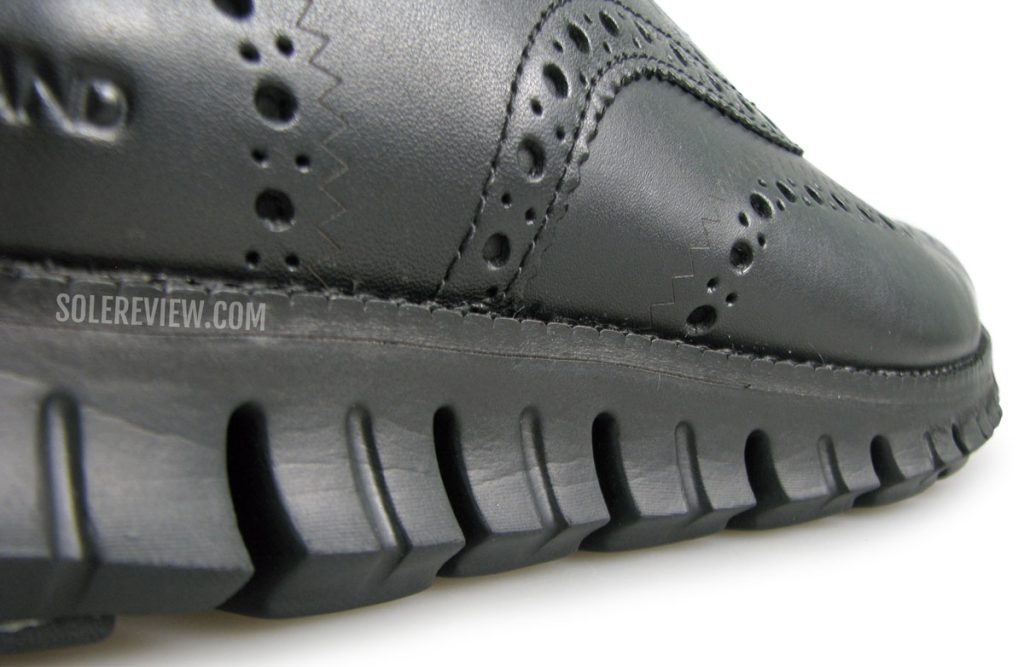 The Nike Free-inspired midsole delivers a lot of flexible comfort.

The Zerogrand is great for walking around town. The low weight and flexibility make it very comfortable, and the supportive midsole feels very planted despite its slim profile.

Also worth highlighting are the flared midsole sidewalls that create a wide and supportive base for the foot. 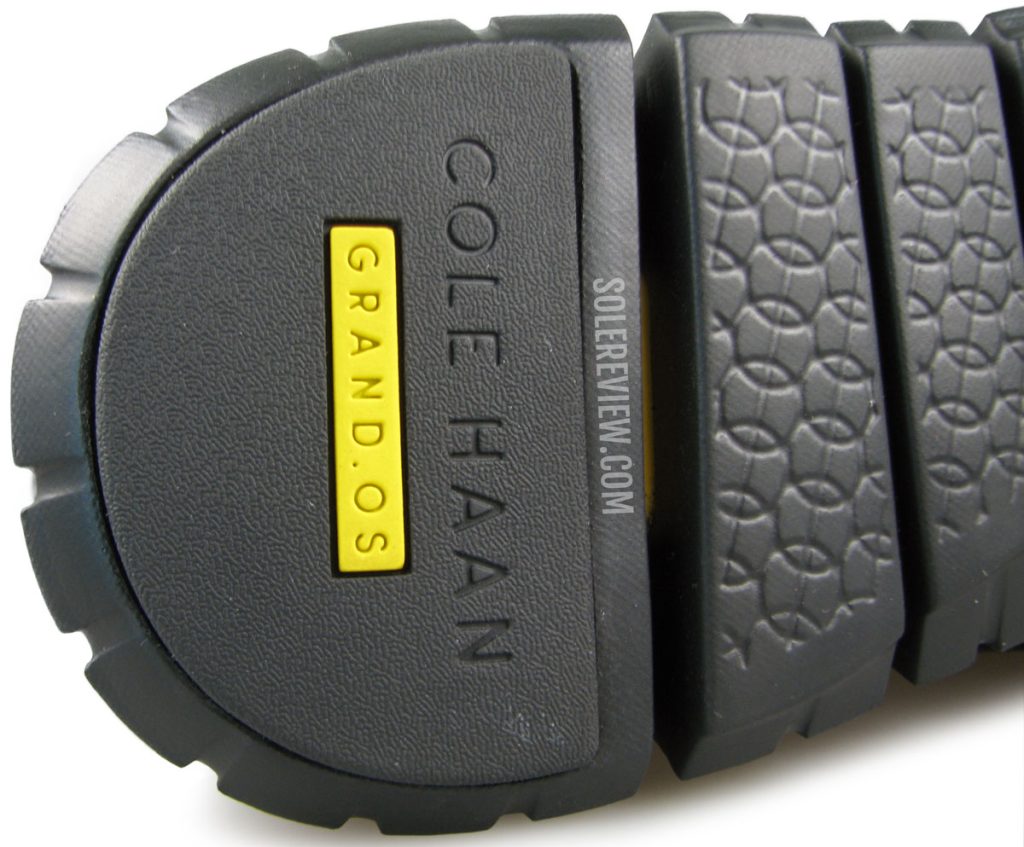 Outsole rubber is only under the heel and forefoot.

Most shoes with EVA foam-based outsole do not grip very well, and that’s true for the Zerogrand as well. Rubber is used sparingly on the outsole – only under the heel and forefoot edge have them.

The traction isn’t bad on clean pavements, but the flat EVA outsole struggles on smooth floors. On dusty or muddy surfaces, we’d recommend wearing shoes with a Polyurethane or rubber outsole instead.

THE UPPER DESIGN, MATERIALS, AND FIT 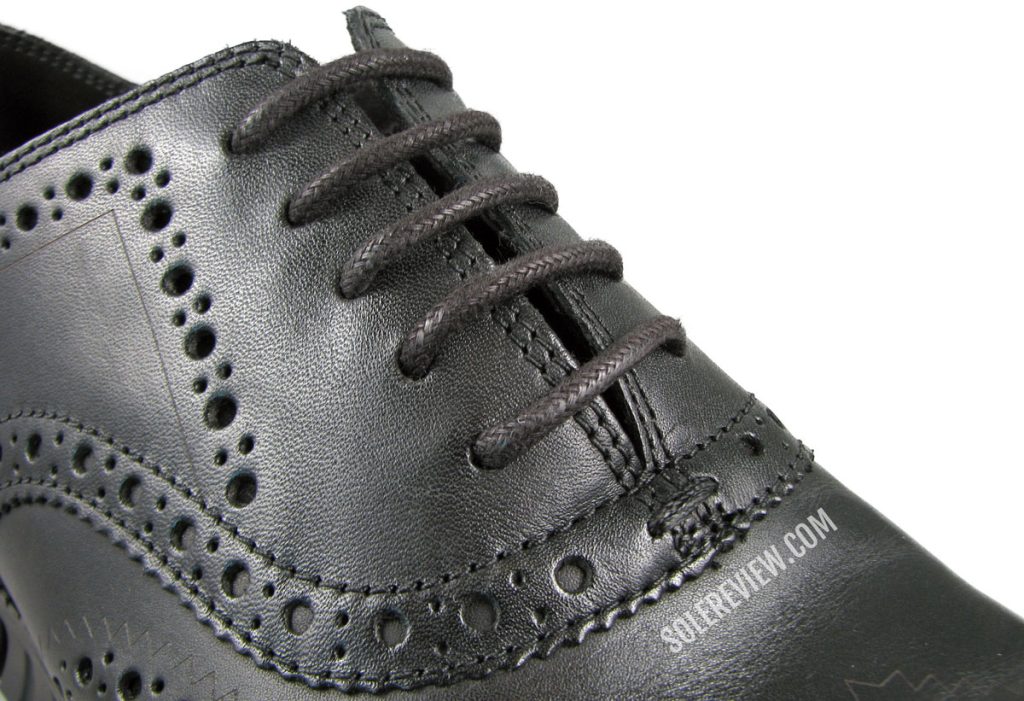 This is an Oxford; notice the closed lacing design without external flaps.

Unlike most leather dress shoes that are called an ‘Oxford’ but are technically a Derby, the Zerogrand is a true Oxford.

An Oxford design lacks external lacing panels, and has a V-shaped opening when the laces are untied.

The exterior relies on just three leather panels, but with an abundance of decorative detail.

One of the nicer aspects of the Zerogrand’s upper is its pattern minimalism. This shoe is called the ‘Wingtip’, but lacks a separate wingtip overlay on the toe-box.

From a construction perspective, the Zerogrand is a plain toe shoe but with a decorative Brogue perforation in a wingtip outline.

Just three leather panels form the exterior, thus making it a blank canvas for a generous amount of detail. 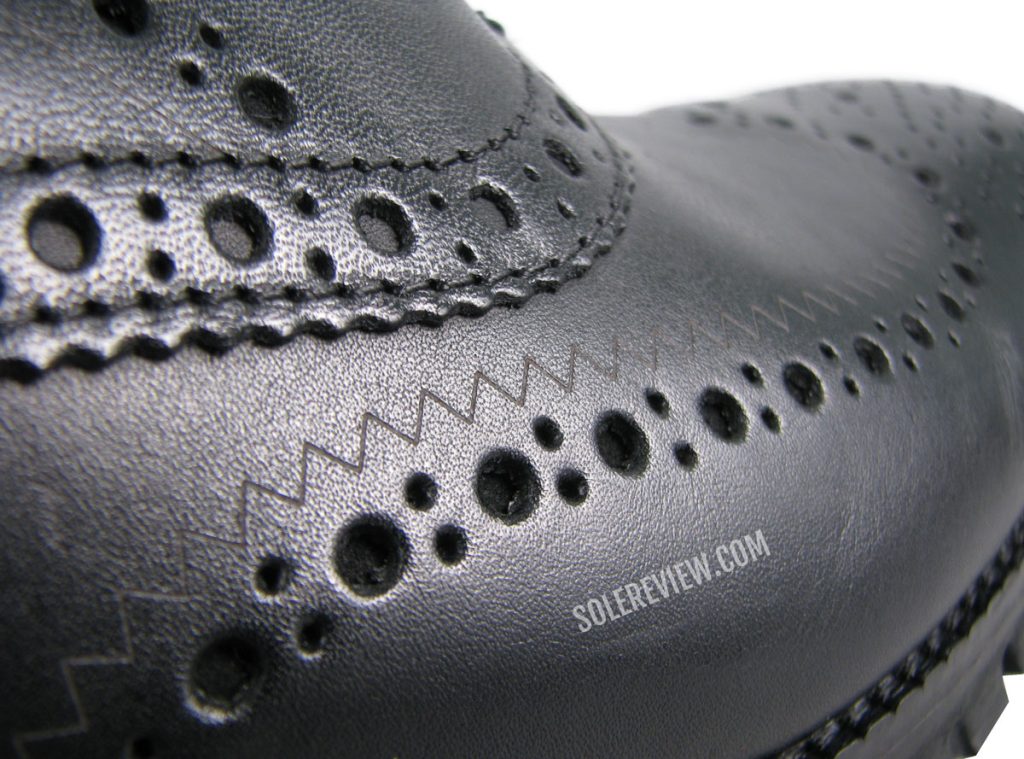 The zig-zag pattern on the edge is called pinking. The upper is covered with subtle laser-etched details and brogueing.

Decorative brogue detailing is everywhere on the upper, including the quarter panel, heel, and even the outside of the heel collar. As if that wasn’t enough, the quarter panels have ‘pinked’ edges. By this, we refer not to the color, but the edges with a zig-zag pattern.

It’s important to mention that the Brogue holes do not go through the upper. It’s backed with a lining so that the feet stay insulated during the colder months. We also walked in the Zerogrand during light rain, and the moisture did not get through.

As long as it’s not pouring, the Zerogrand’s upper offers decent levels of water-resistance. If we had to put a time limit, 20 minutes in light rain is doable.

However, this shoe is not waterproof, but there’s another Zerogrand variant that is. 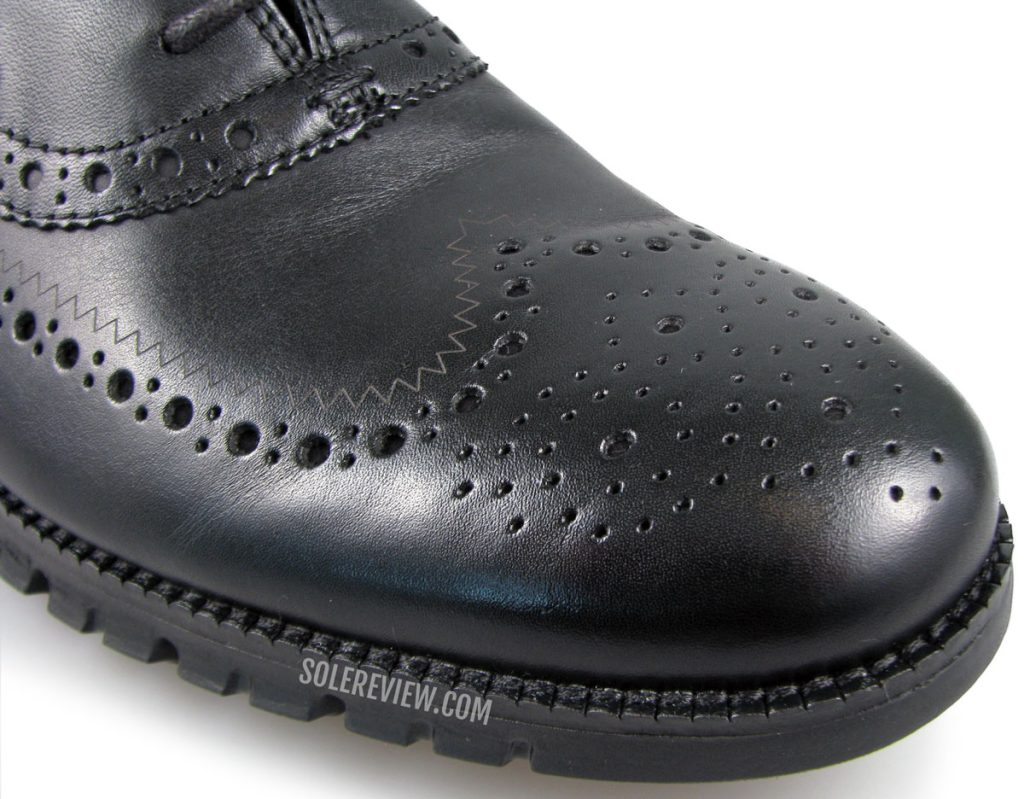 The upper fits narrow and true-to-size. 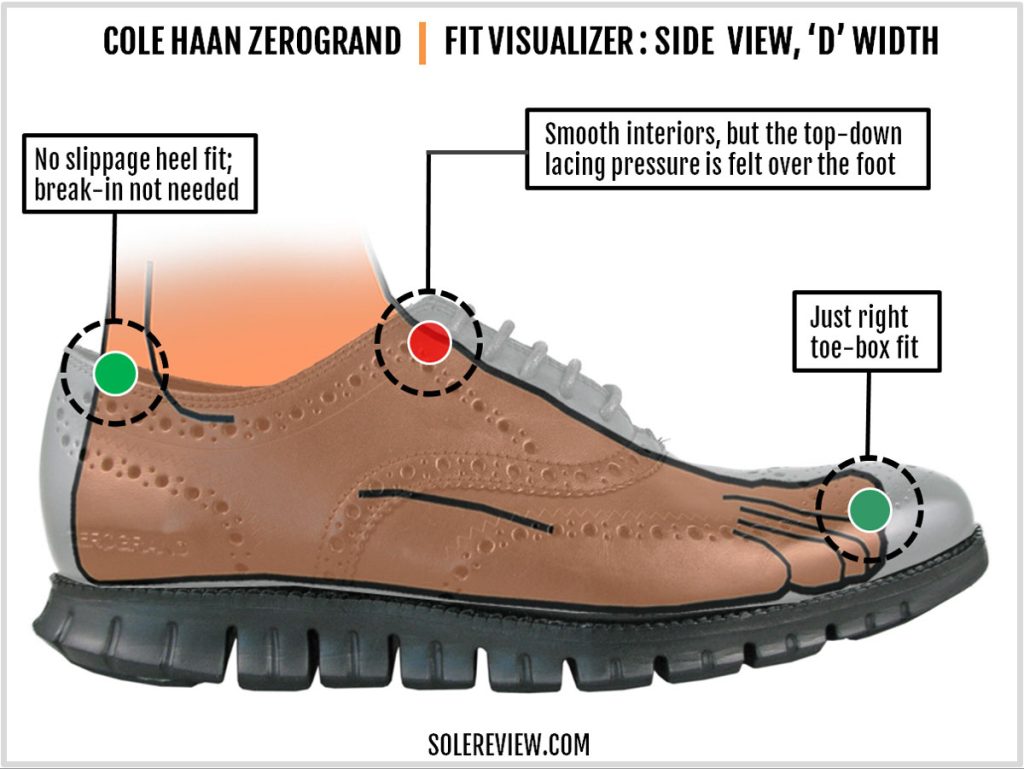 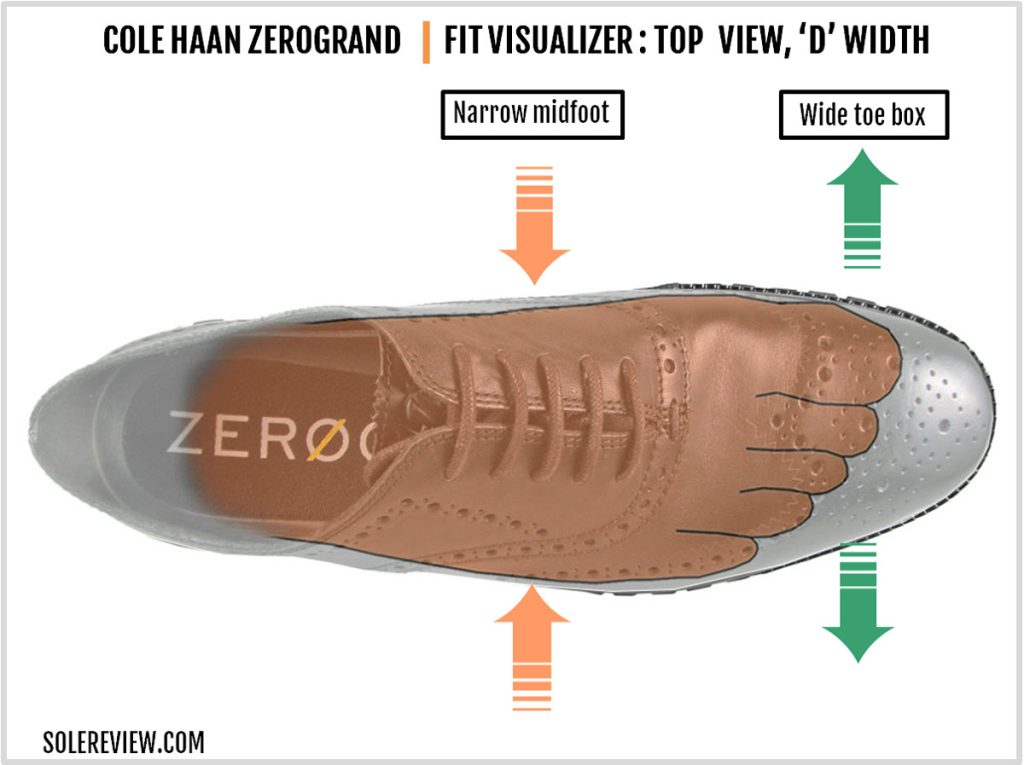 The Zerogrand fits true-to-size with a snug fit through the forefoot and midfoot. So that you know, the upper is narrower than the Originalgrand.

There’s an optional wide sizing available, and we recommend wearers with broader feet to get the wide instead of the standard width. 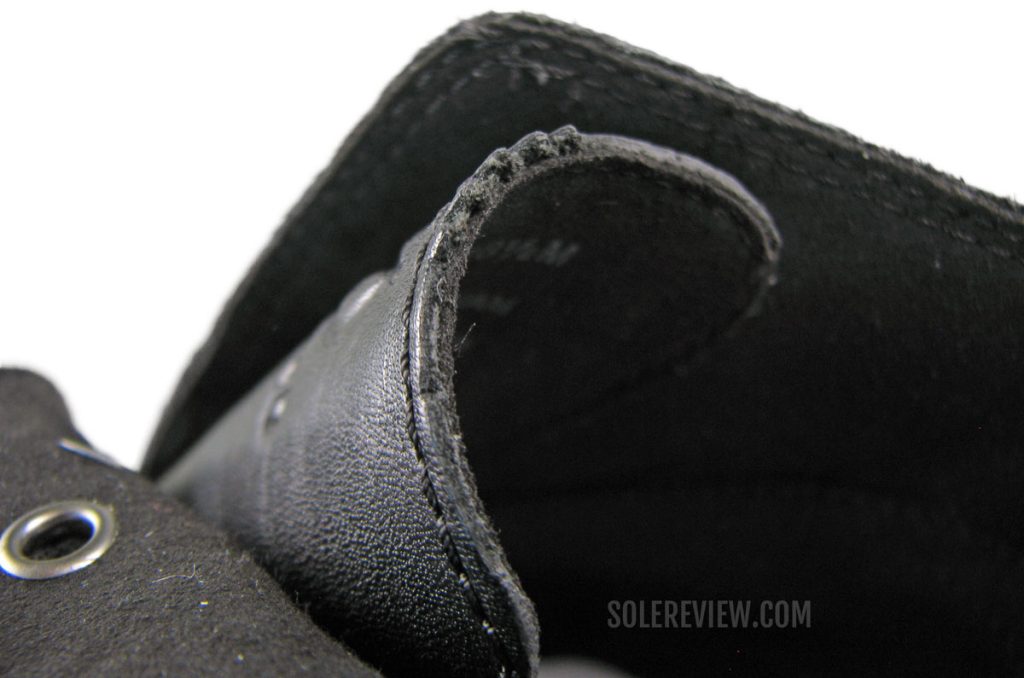 The tongue lacks padding, so the lacing top-down pressure is felt over the foot. The non-folded flap doesn’t bite, though. 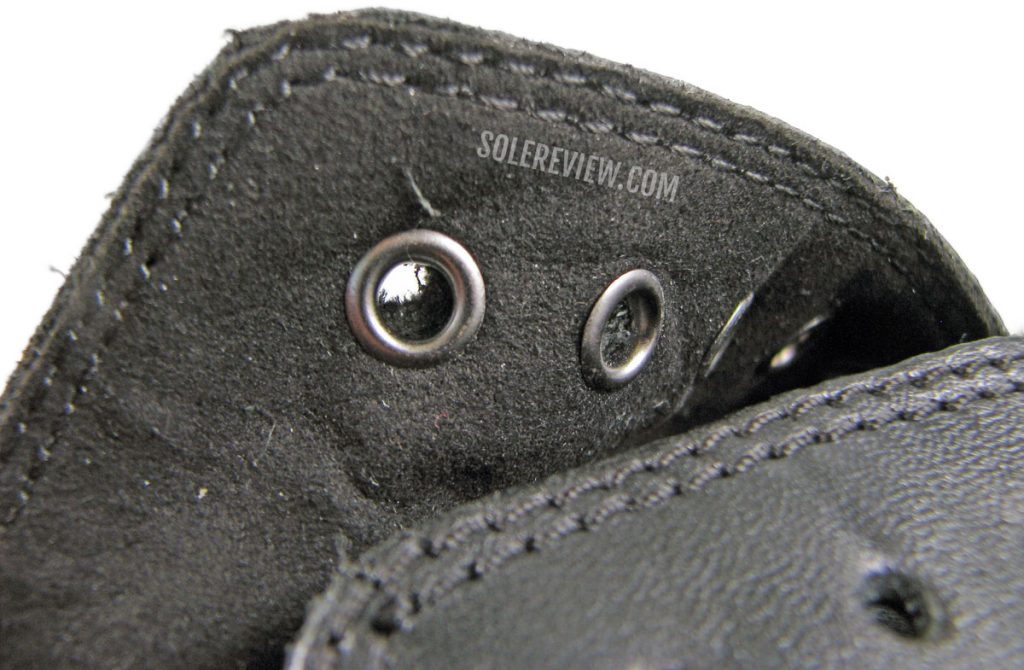 Behind the hidden eyelets are metal grommets that will set off airport security detectors.

Given the deconstructed nature of the upper, the tongue has no padding at all. As a result, the top-down lacing pressure is noticeable over the foot. On the bright side, the short tongue doesn’t press against the instep.

The lacing pressure isn’t uncomfortable, but it ends up making the Zerogrand feeling narrower than it should. 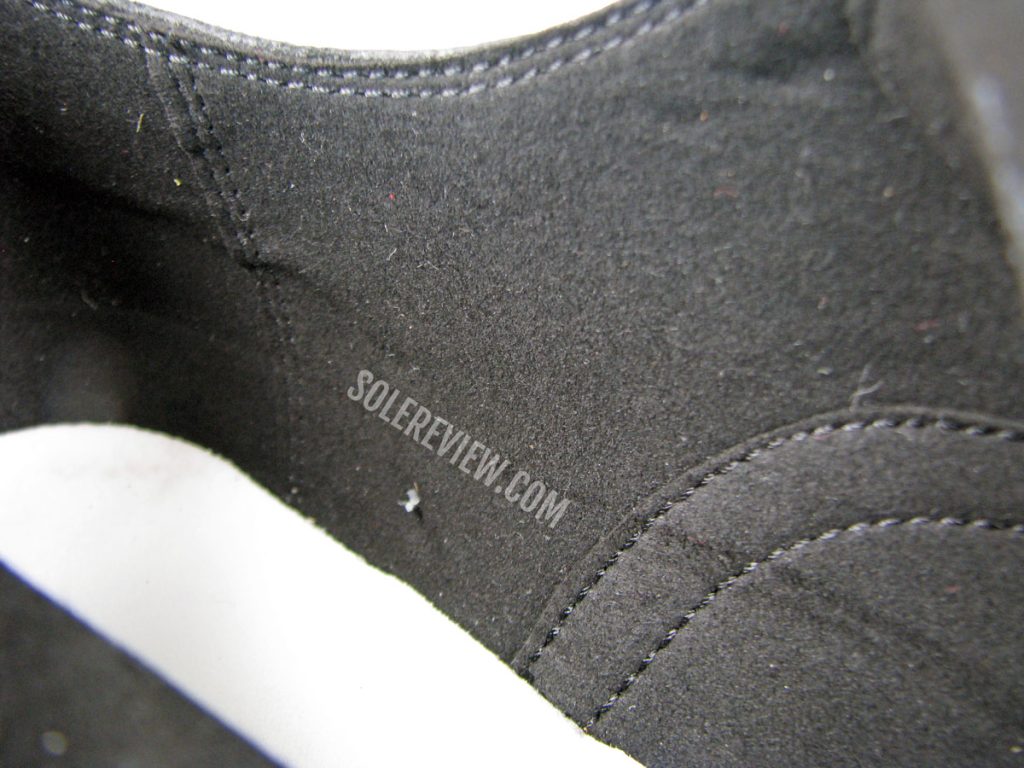 The heel is lined with synthetic suede. The internal heel counter is soft yet supportive.

Otherwise, the thin corrected grain leather reduces the overall weight and requires no time to break-in.

That applies to the heel collar too; the counter is supportive but is relatively flexible. Even with the synthetic suede lining, the heel collar bends easily and doesn’t bite the foot. 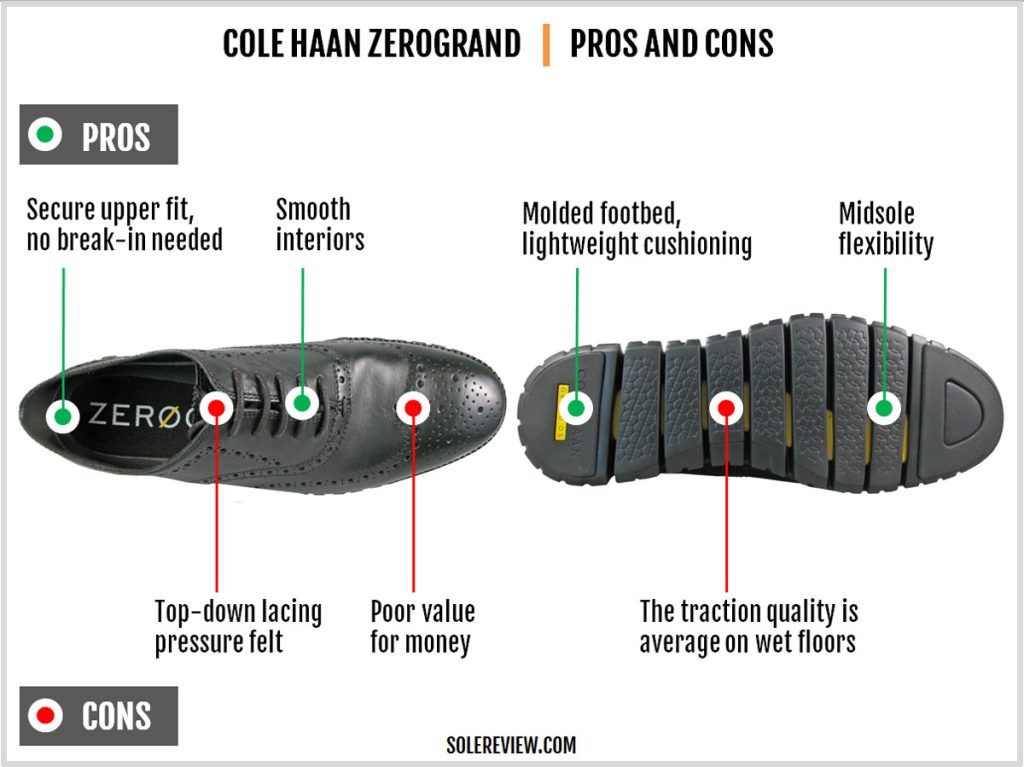 The articulated midsole makes the Zerogrand one of the lightest dress shoe-hybrids money can buy. The flexible build and foam midsole enhances the ride comfort that translates into a comfortable commuting experience.

Thanks to the deconstructed design, the Zerogrand wears comfortably right of the box without a break-in period. The insides are snug yet smooth, and there’s an optional wide sizing for those who need it.

We also like the contoured insole that cups the foot from the heel to midfoot.

The average outsole grip and the low value for money are the two concerns we have with the Zerogrand. There’s not much one can do with the grip of EVA outsoles, so this isn’t specific to the Zerogrand. 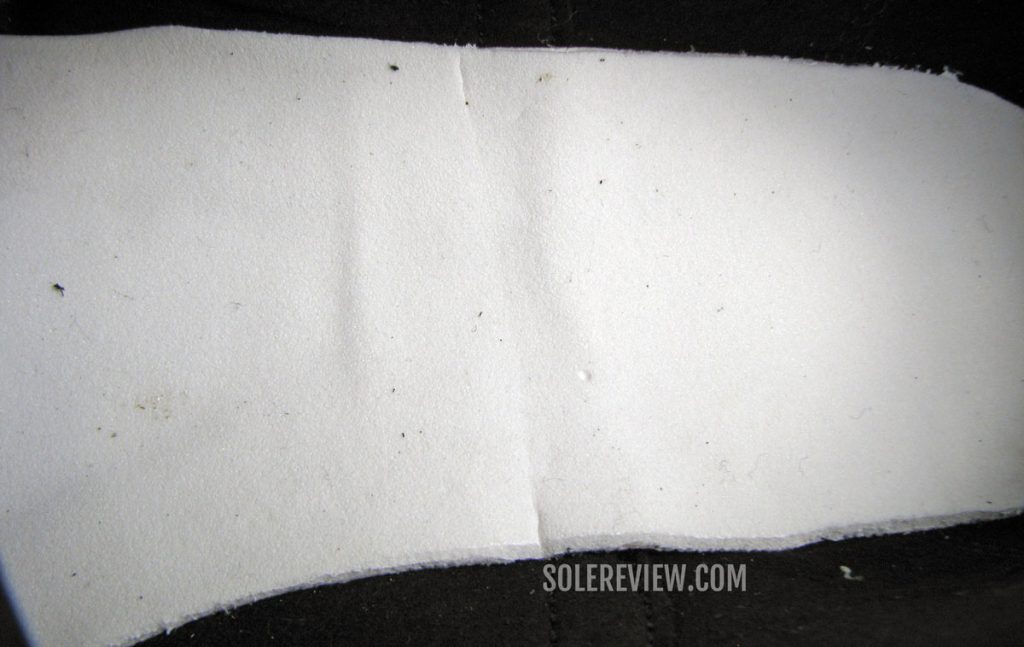 The bumpy EVA foam lasting is a sign of lax construction standards.

While the exterior looks clean and streamlined, the insides are a mess.

The white EVA lasting looks cheap, and so does the finishing under it. This has no impact on the performance at all, but we like to nitpick about these things. For example, even the Johnston and Murphy Holden has an EVA foam lasting, but it’s cleanly executed.

Lastly, we have the same comment about the Zerogrand’s $195 retail as we did about the Originalgrand. Based on the quality of materials and construction, a $30 lower price makes more sense.

SHOES THAT ARE SIMILAR TO THE COLE HAAN ZEROGRAND WINGTIP 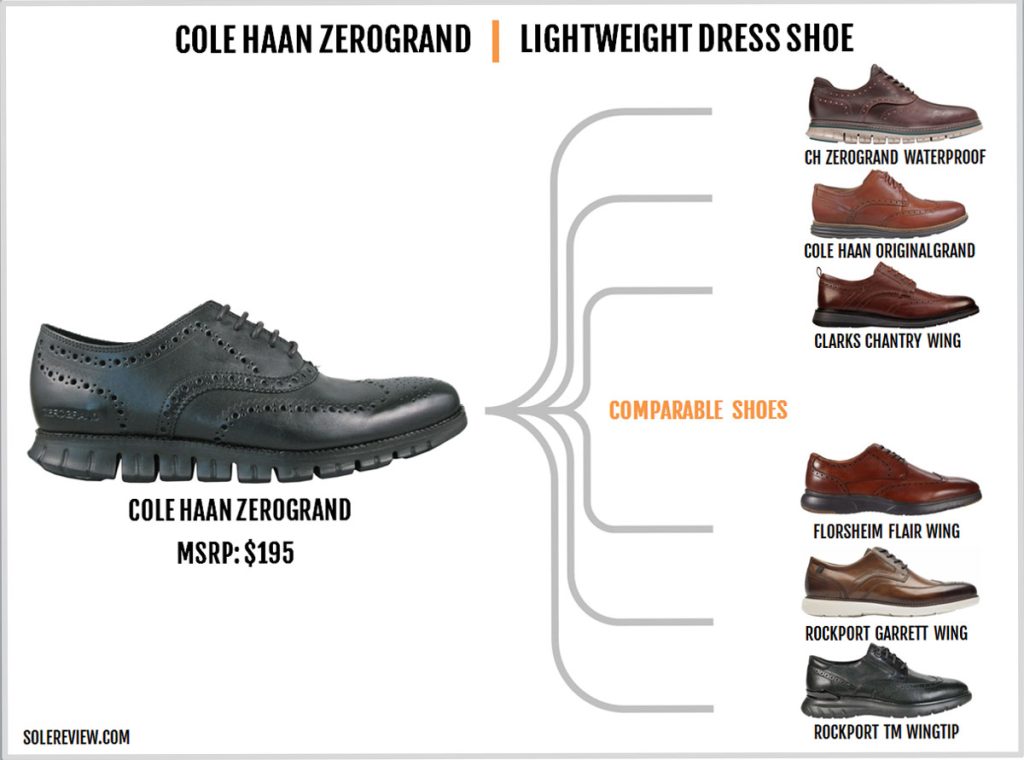 Other than the Cole Haan Originalgrand, there’s the waterproof version of the Zerogrand at a price premium of $15.

But the WP Zerogrand is well worth the premium, because not only does the waterproof shoe prevent water from entering, but the upper also uses a true welt.

The tongue and heel have foam padding as well, thus making the interiors plusher. See? We did say that the standard Zerogrand was overpriced.

The Johnston and Murphy Holden Wingtip is heavily inspired by the flexible architecture of the Zerogrand, so that’s an option one could try. While it’s 2-ounces heavier, the interiors are more comfortable due to the foam quilting, more space, and the choice of lining materials.

Though Clarks, Florsheim, and Rockport sell several dress-hybrid shoes, their midsoles aren’t as flexible as the Zerogrand.

If you can look past the midsole flexibility and sub-10-ounce weight of the Cole Haan Zerogrand, then these are comfortable dress sneakers worth considering.