Outsole: Blown rubber in the forefoot, Carbon rubber in midfoot and heel.

A great example of retrogressive evolution if ever there was one. The Vomero 7 does not feel plush as it should, the ride has firmed up and there are some significant shortcomings. We'd say - skip the Vomero 7, and either buy the 6 or wait for the 8. If neither works, go get a Brooks Glycerin 10 or the Asics Gel Nimbis 14
Asics Gel Nimbus 14, Brooks Glycerin 10, Nike Pegasus 29

The 2008 Nike Vomero 3 was the best of them all. Amazingly plush upper with a down-feather soft sole to match, the shoe caressed your feet like no other running shoe. We marveled and swooned over materials used, which at the time set a new benchmark for what should be used to make $100+ running shoe. We ran in the Vomero 3 till the sole wore down to the airbags, and when it did, we so wished we had stocked on a few extra pairs. Because over the next few years, the evolution of the Vomero has been anything but progressive.

Each year’s update was an exercise in stripping away what was good in the Vomero, and when we thought it couldn’t get worse, the Vomero 7 was released this summer. Yes, you read it right – without any euphemism, we’ll give it to you straight: The 2012 Vomero 7 sucks for a $130 running shoe. We are extremely fond of Nike running shoes; and we wished the Vomero 7 was an exemplary cushioned running shoe.

But the sorry fact is that it isn’t even pale shadow of the Vomero 3 which made it a favorite of plush-ness seeking runners. We also tested the Vomero 7 for more than a month, assessing whether it could redeem itself. But the overwhelming negatives overshadowed any redemptions – in what is a first on solereview, we had to write an overtly negative review.

Is the Vomero 7 really that bad? Before answering that question, we’d like to point out the Vomero 7 is a $130 running shoe, which pitches it against formidable competitors like the Brooks Glycerin 10, the Asics Gel Nimbus 14 and the Saucony Triumph 9. We also benchmarked the shoe against its previous versions, comparing materials and features. We would have perhaps painted a different picture if the Vomero 7 was a $90 shoe, but it isn’t. It is an expensive shoe at one-hundred-thirty greenbacks, and there is a certain value which the shoe has to deliver after paying that kind of money. 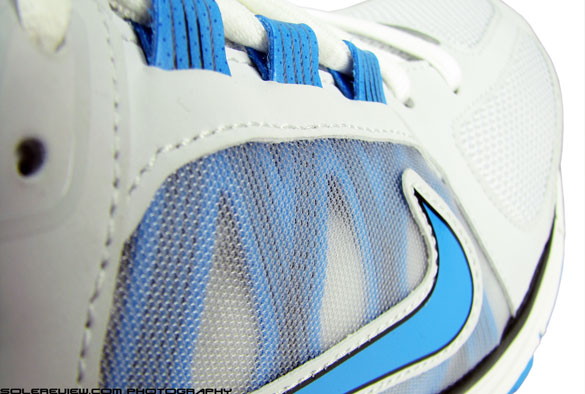 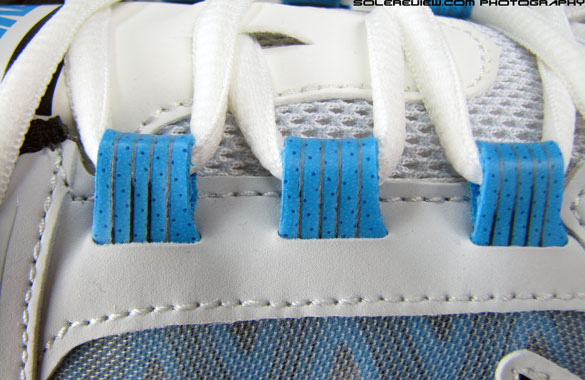 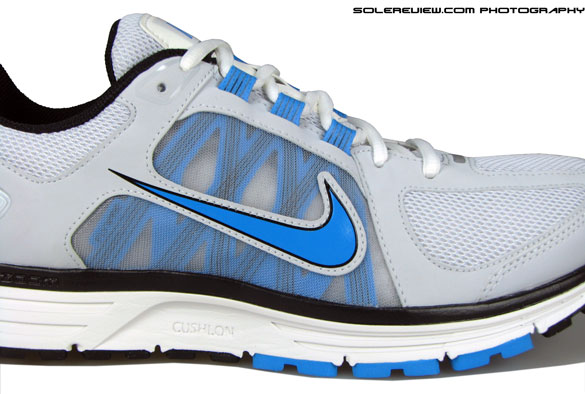 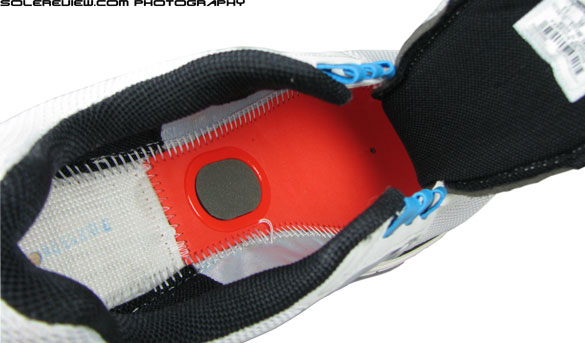 The Vomero 7’s upper is a good place to start our review. Structurally, two significant changes happen on the Vomero 7 when compared to the 6. First is the addition of a Flywire lacing support system in the midfoot. This was seen as inevitable since most of the other running shoes had Flywire in some form or the other. But we question the execution – instead of integrating (laminating) the Flywire cords with the upper like in the Structure Triax and the Pegasus, the Vomero uses a thick layer of cut-out Flywire+synthetic leather between the upper and the lining.

This robs the Vomero 7 of any chance which it might have had at achieving a soft feel around the midfoot, as the cut-out panel results in a Spartan fit. And frankly, after spending enough miles on the Vomero 7 to make an informed assessment, we feel that the difference in midfoot support (vs. the Vomero 6) did not warrant using the bulky Flywire panel. Instead, a laminate style Flywire would have been better suited for the Vomero 7. In our opinion, the midfoot support of the Vomero 6 did its job rather well, because of the break between the eyestay and the midfoot area – that helped in wrapping snug around the waist of the foot.

The second change is the absence of the gusseted tongue  which resulted in a semi-bootie fit and prevented the tongue from sliding around in the Vomero 6. This is exactly the kind of stripping down we talked about earlier. Without the gusset, you feel the tongue and the upper interior as two different components, and what worse, after a 5k run, the tongue ends up sliding towards the outer side, the tongue loop notwithstanding. 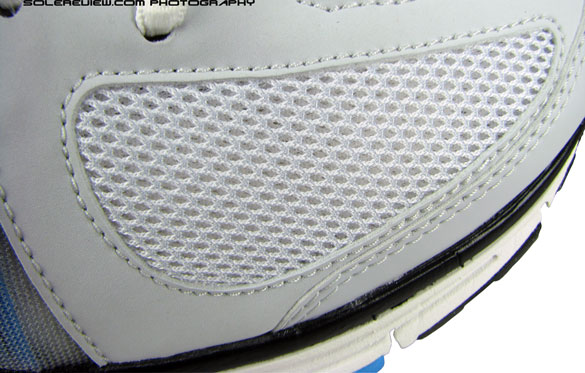 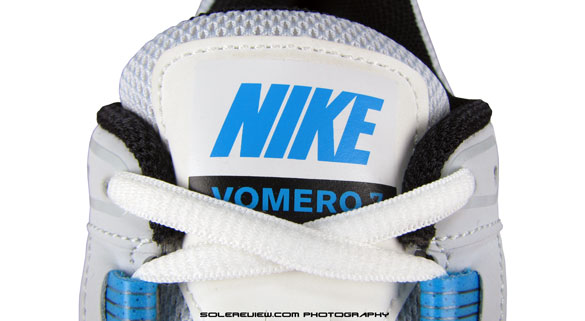 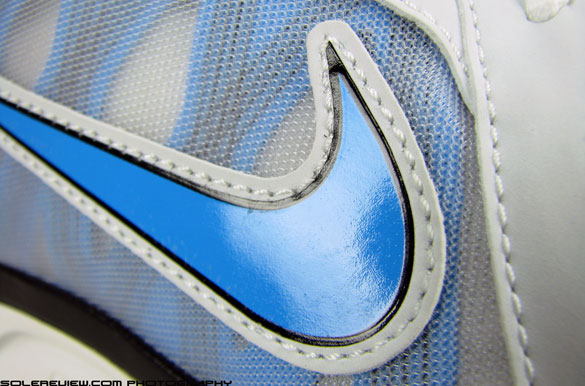 The materials used in the upper construction take a downhill ride too. The mesh on the Vomero 7 is a few levels lower than the one used in last year’s V6. While it is still multi-layer spacer mesh, it has a tighter knit structure, affecting ventilation and multi-directional flexibility. Even when running in 75° /24° weather, the shoe felt hotter than any of the versions tested before. In addition to the functional drawbacks, the pillowy-soft-luxury feel is entirely missing, with the upper of the Vomero 7  feeling like that of a shoe half the price.

There are other very obvious signs of cost-cutting too – plain jane synthetic Nubuck, no molding details, mono-color laces, cheap screen printed logo on the sides and  tongue label. The collar and tongue fabric lining is soft to the feel, but that is the only part which feels right. While the collar grips well and there are no irritating seams inside the upper, the whole experience was underwhelming, to say the least. 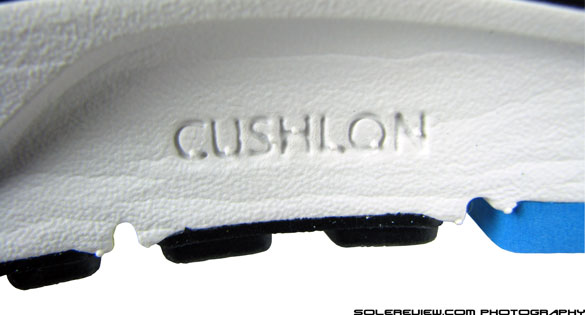 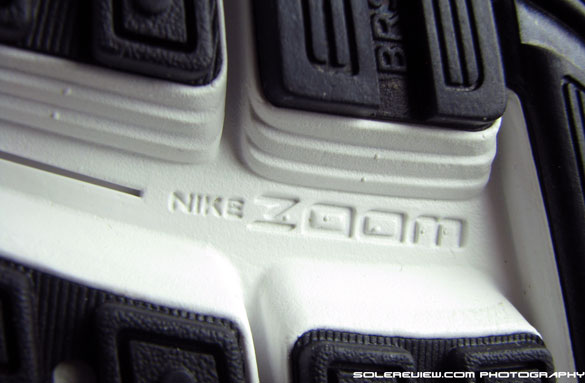 Now moving down to the sole unit. A lot of runners and reviewers on different forums feel that the new Vomero 7 has firmed up, and we attest that to be true. Two changes in the Vomero 7  make that happen. First is the removal of the crash pad from the outer side of the midsole, which now turns the new midsole into a single compound, single component type.

The second change is how the strobel (layer beneath the sockliner/insole) has been constructed. From a consistent layer of heel to toe foam strobel, the heel portion now has a layer of hard cellulose board (cardboard in layman speak) and then the regular foam strobel from midfoot to toe. While we never quite understood why Nike has done this – it is also in the new Pegasus 29 – it has impacted the Vomero 7’s ride, making it firmer.

Which is really not-so-good. The Vomero has always been about the legendary soft ride, and runners buy the Vomero because it stands for that. Nike does have other shoes which provides a firmer ride, so with these changes, they have attempted to fix something which was never broken in the first place. 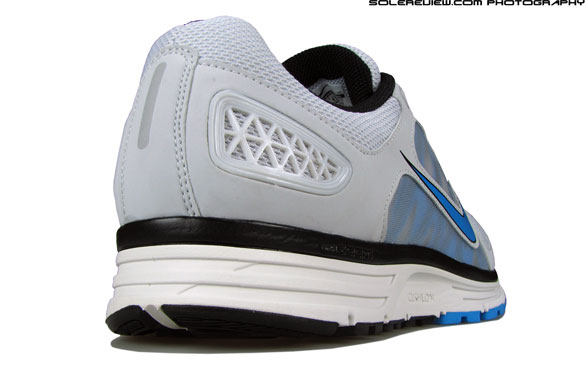 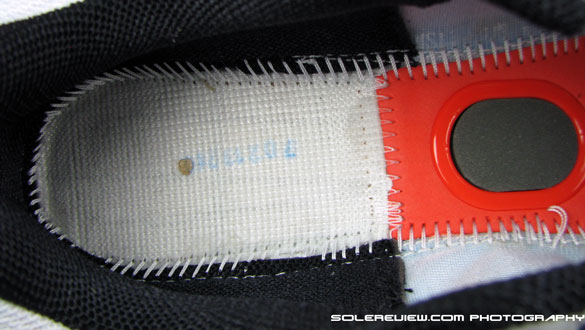 We ran in the Vomero 7 over many 5 k sessions, and ride experience threw up some mixed results. The Vomero 7 has good stability and transition in forward movements, with the beveled heel section aiding efficient footstrike. What is disappointing though, is the how the forefoot airbags react after a 5k run. As we approached our 4th kilometer in the run, the forefoot airbags inserts started feel like mild lumps under the sockliner. It seems like the case of the Zoom air bags swelling due to the heat generated during a run.

Since the Zoom Air Bags are drop-stitched ( the top and bottom layer connected by yarns throughout), the swell must be minimal, but like anything directly under the foot, it bothers you during a run. The saving grace is the tri-layered Ortholite Fitsole sockliner, which manages to insulate most of the going-ons beneath it. We also feel that Nike Air is getting a bit long in the tooth, with no significant innovation over the past few years. While it is a good cushioning technology platform, it has its drawbacks – it’s effects are highly localized and contrasts with the properties/densities of the materials around it, and it also lacks flexibility. It is time for an overhaul.

So that’s the Vomero 7 for you. We would recommend that you hunt for close-out deals on the Vomero 6, or try alternatives like the Brooks Glycerin 10 (highly recommended, currently under review) or wait for the next summer’s Vomero 8, hoping that it reverses some of this year’s follies. This year’s Vomero 7 is a fine example of retrogression; not worth the $130 price.

(Disclaimer: Solereview received the pair of Nike Zoom Vomero 7 as a free media sample from Nike)