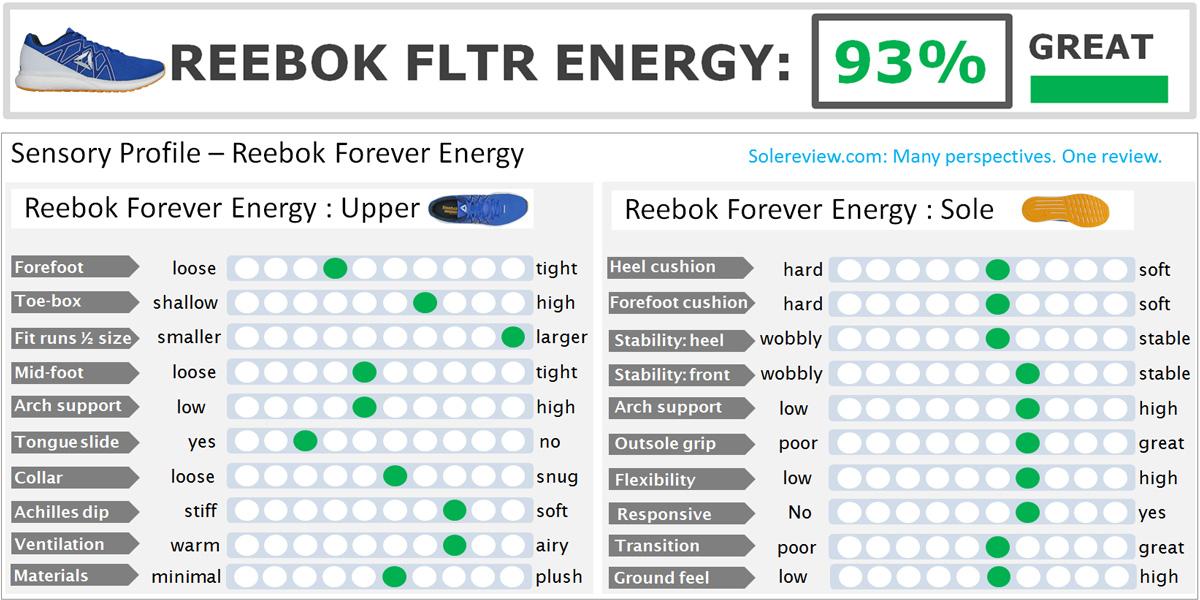 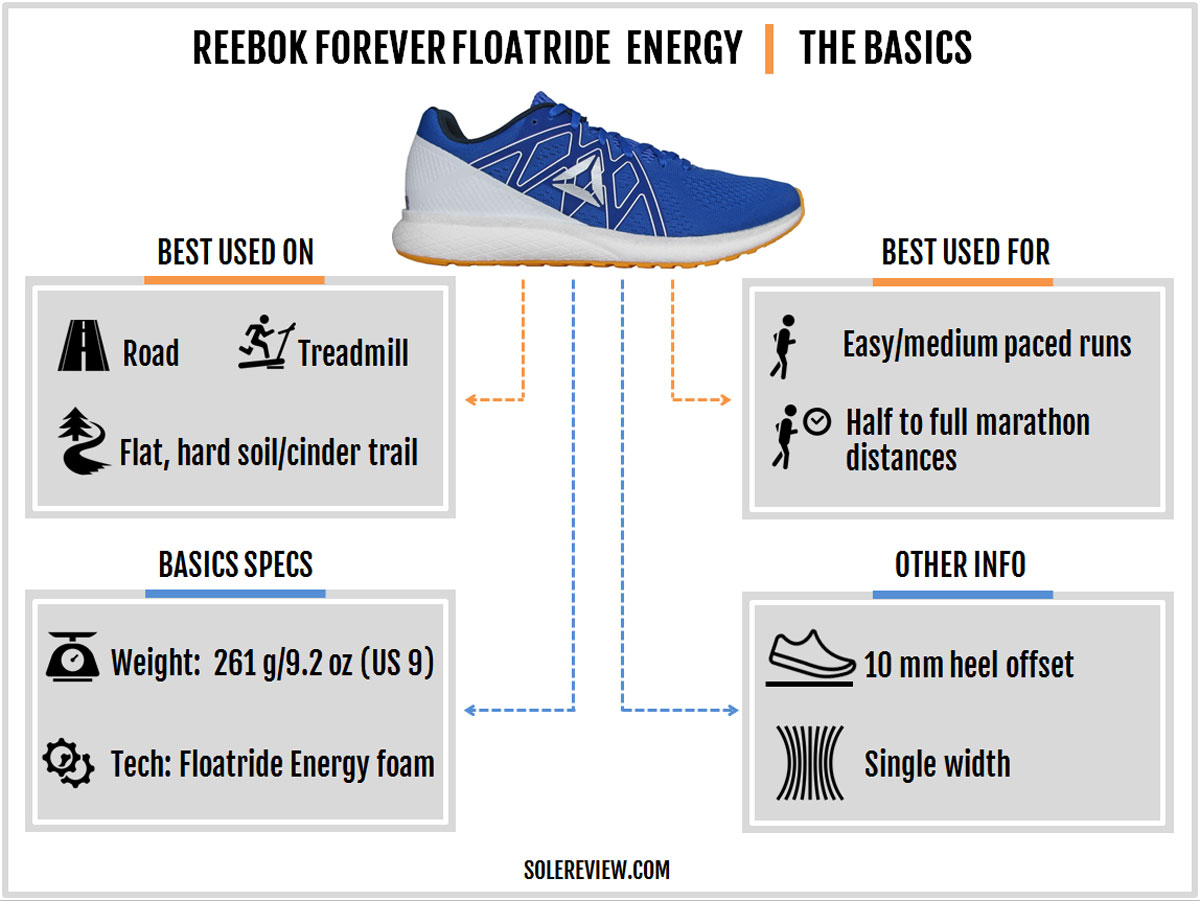 Purely by design or accident, Reebok peaks as a running shoe brand every 10 years or so. The mid to late ’90s was the era of the Instapump Fury, the Aztrek, the 3D Electrolyte and Opus, and the DMX10 with its ice rubber outsole and connected air chambers.

Ten years ago, Reebok sold an excellent running shoe assortment under the ‘Premier’ label. We even reviewed one of those shoes on solereview around 11 years ago. Yes, we’ve been slicing shoes open since the dinosaurs ruled the earth.

And now that adidas (Reebok’s parent company) has its footwear game in place, the latter’s once-not-so-favorite stepchild is finally getting the attention it deserves. Though Reebok has built good equity in the cross-training footwear business, it fell behind in once what used to be its core strength – running footwear.

If the recent releases are any sign, Reebok is steadily making inroads into the highly competitive performance running market. Things warmed up with the quasi-running Floatride Run – a lifestyle sneaker with a comfortable knit upper and lightweight ride, courtesy of the Pebax-based Floatride foam.

Around the same time, two performance models – the Floatride Run Fast and its Pro version – won rave reviews. Both models are based on the hyper-lightweight and cushioned Pebax foam along with a no-frills upper.

While Reebok still isn’t a brand people go to for performance running footwear, the Run Fast duo made people take notice and also set the foundation for other releases – such as the Harmony Road 3 and the Floatride Forever Energy. 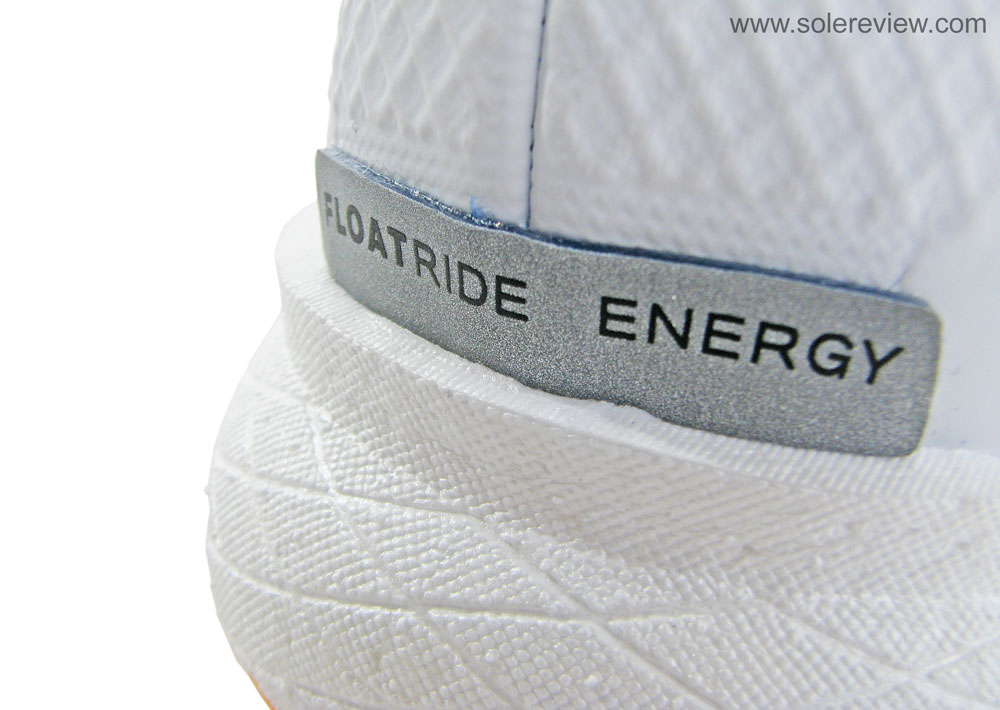 The Forever Energy is a $100 (US retail) neutral running shoe with shades of the Run Fast – but without the Pebax Foam and the EVA rim. It uses a different midsole material and a basic yet functional upper; both of these combine to create a comfortable multi-use trainer.

The upper fit isn’t perfect, but the Reebok Floatride Forever Energy gets enough things right to make it one of the best, if not the best, daily trainers of 2019. 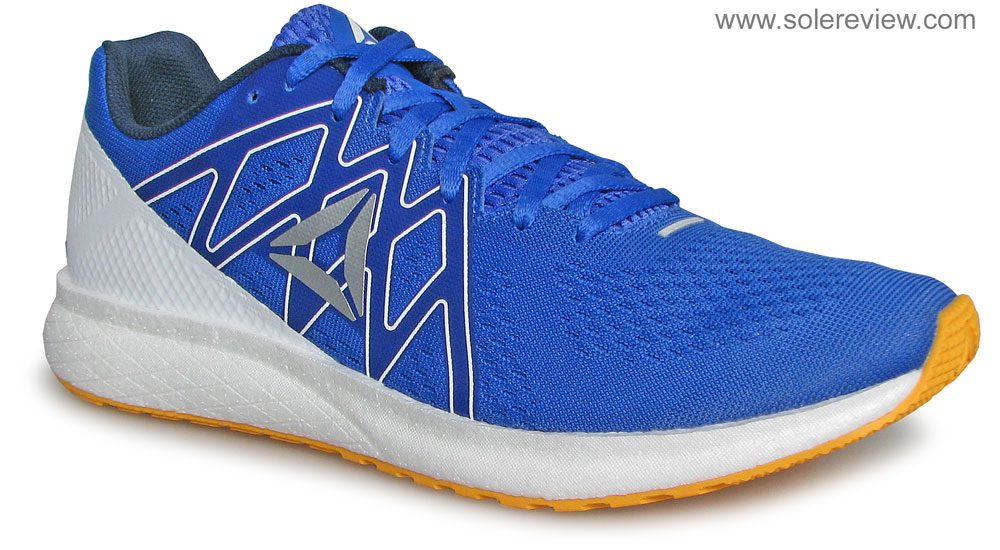 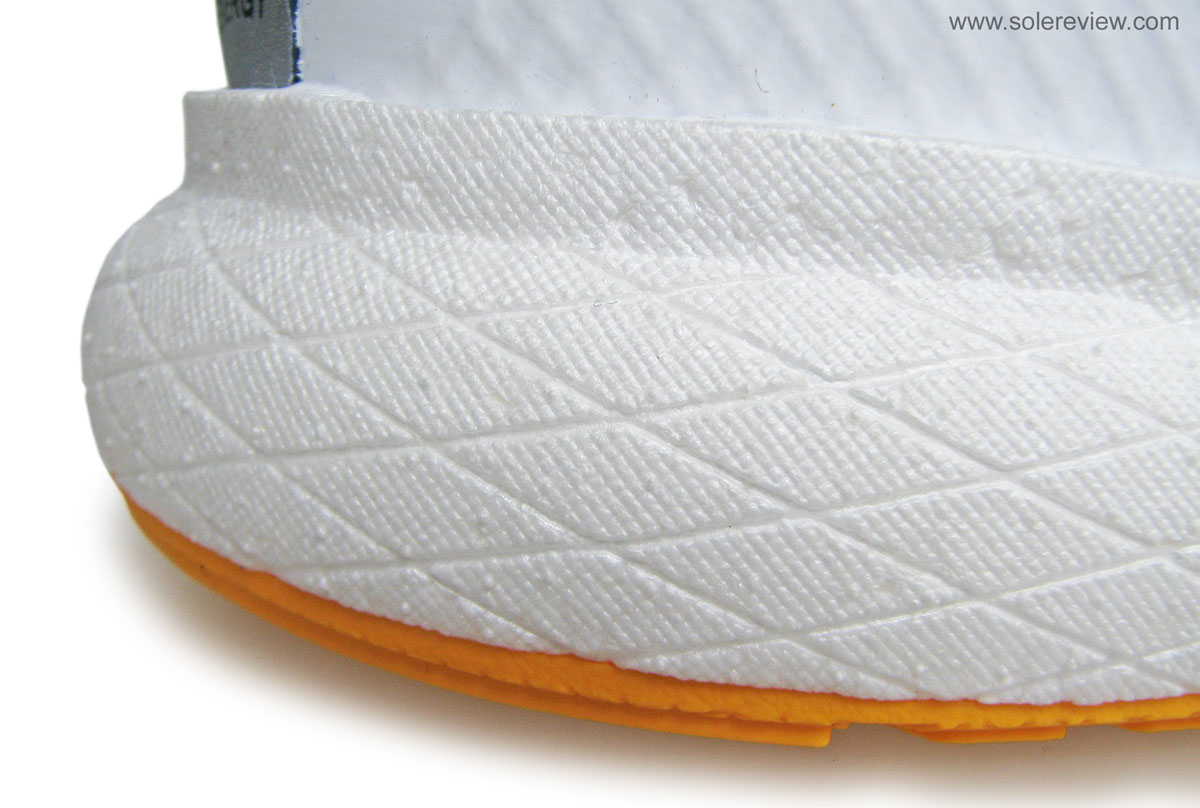 Unlike Reebok’s more expensive models which are based on the Pebax foam, the Forever Energy uses an expanded Polyurethane material which is somewhat similar to adidas Boost.

It doesn’t look or feel the same though; the sidewalls have a shinier surface and the midsole is packed with smaller e-TPU globules. Its grid-like surface design makes it easy to confuse it with the Pebax based Floatride material.

Also, the Floatride Energy isn’t as soft as adidas Boost. The density is somewhere between the Saucony Everun and Boost, which means that the midsole softness is just right. And that’s one of the many things runners will appreciate about this shoe. 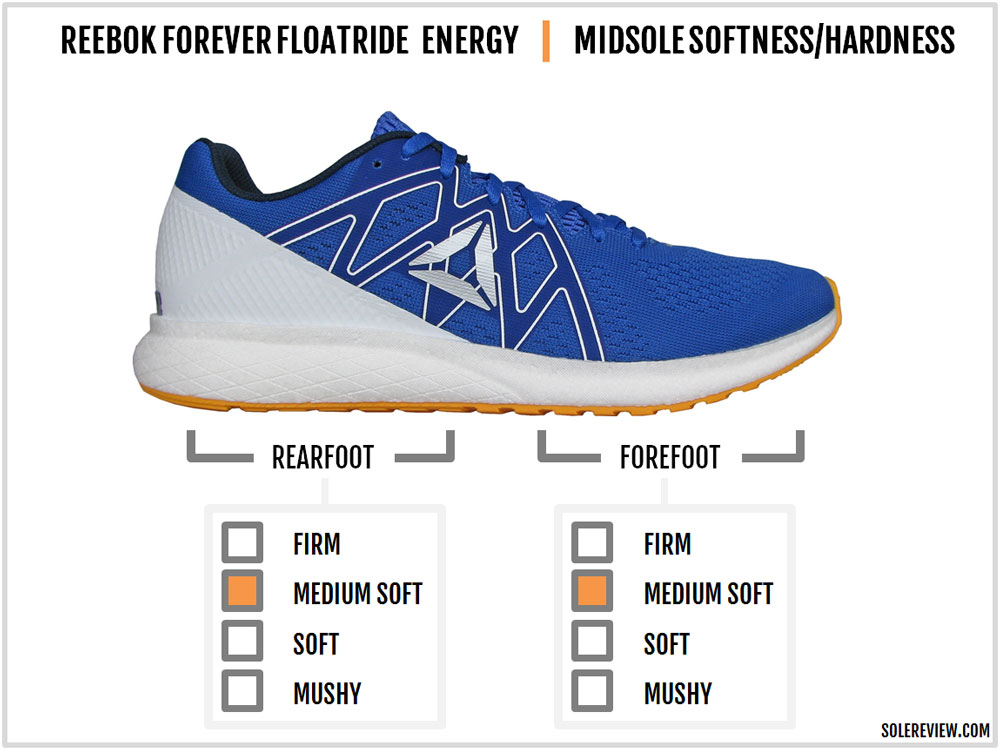 Full-volume adidas Boost shoes can end up being too soft during quicker runs. On the other hand, Saucony Everun tends to run heavy.

Reebok’s formulation balances cushioning and responsiveness while being lightweight – this shoe weighs just over 9 ounces. 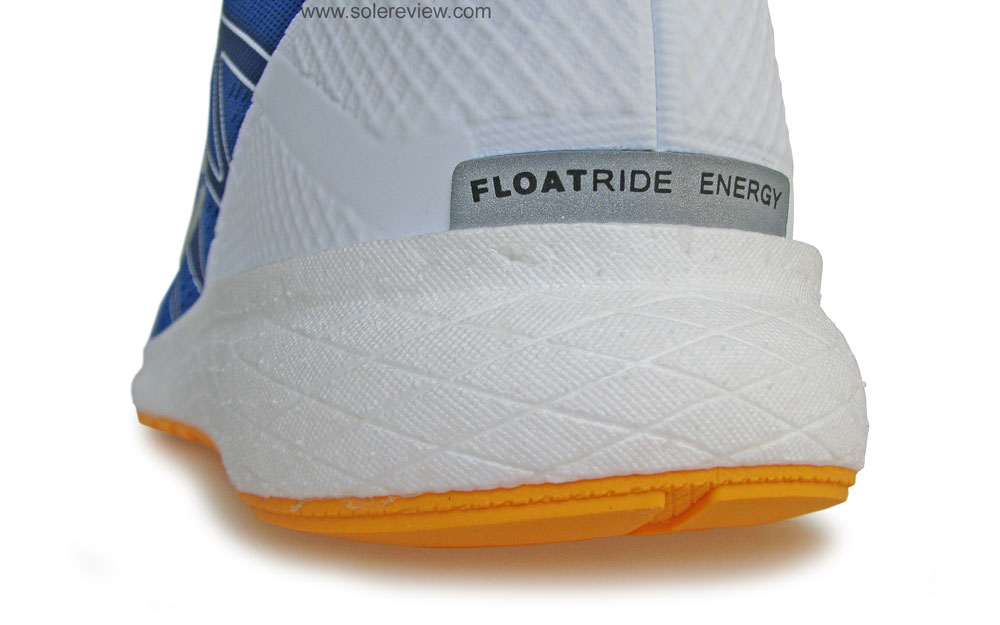 The relative firmness also makes the ride supportive without the need to resort to an EVA rim. The midsole flares wide under the forefoot and the heel for stability.

The inner side of the midfoot midsole is filled up nicely so there’s a sense of under-arch support. 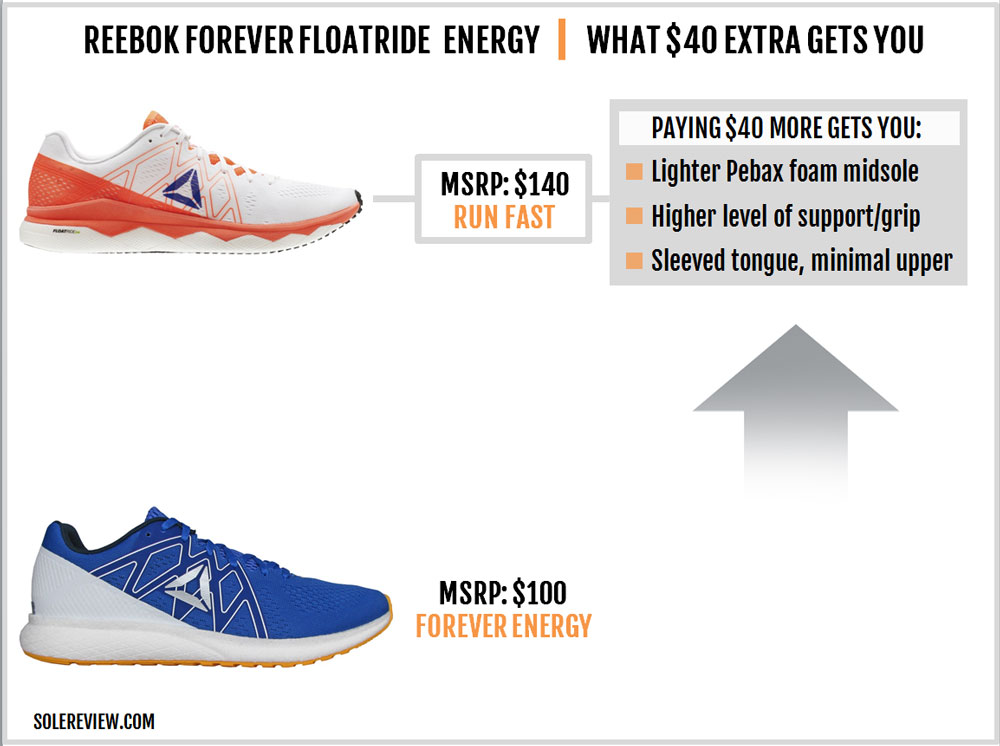 If you want an EVA rim, the $40 more expensive Floatride Run Fast is an option. With the Run Fast, you also get a grippier outsole and an inner sleeve which holds the tongue in place.

There’s very little midsole bias with the Forever Energy so the ride is very neutral. The compression is spread evenly across both sides without any hint of motion control. Transitions are great too. The outsole grips well and is full contact; there are no gaps under the midfoot which can cause breaks in loading. 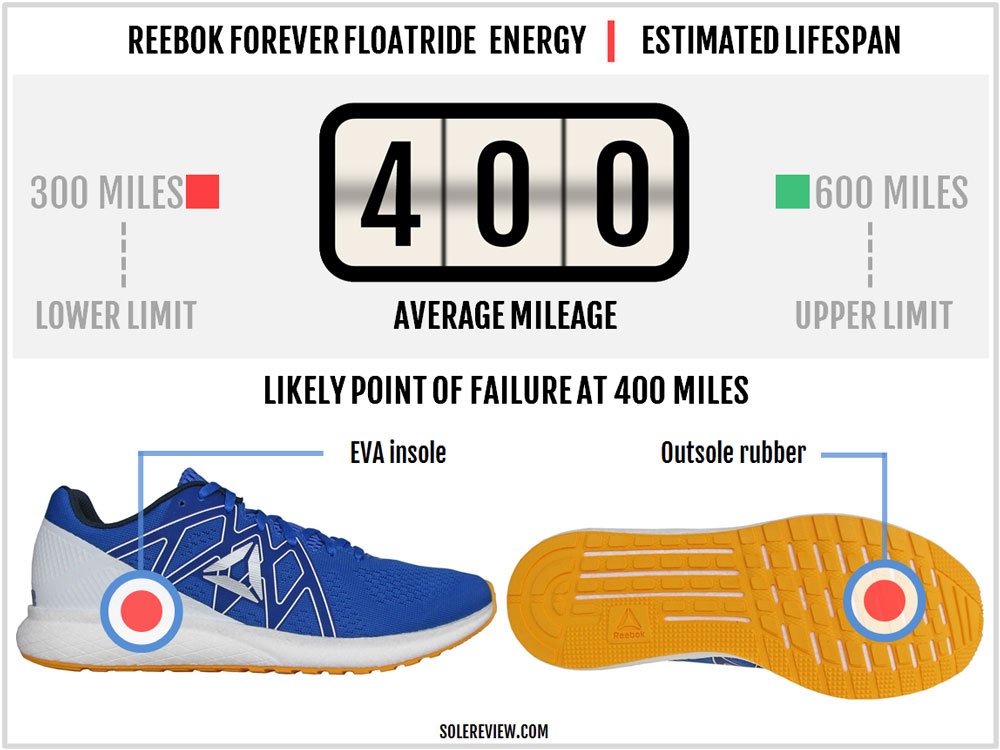 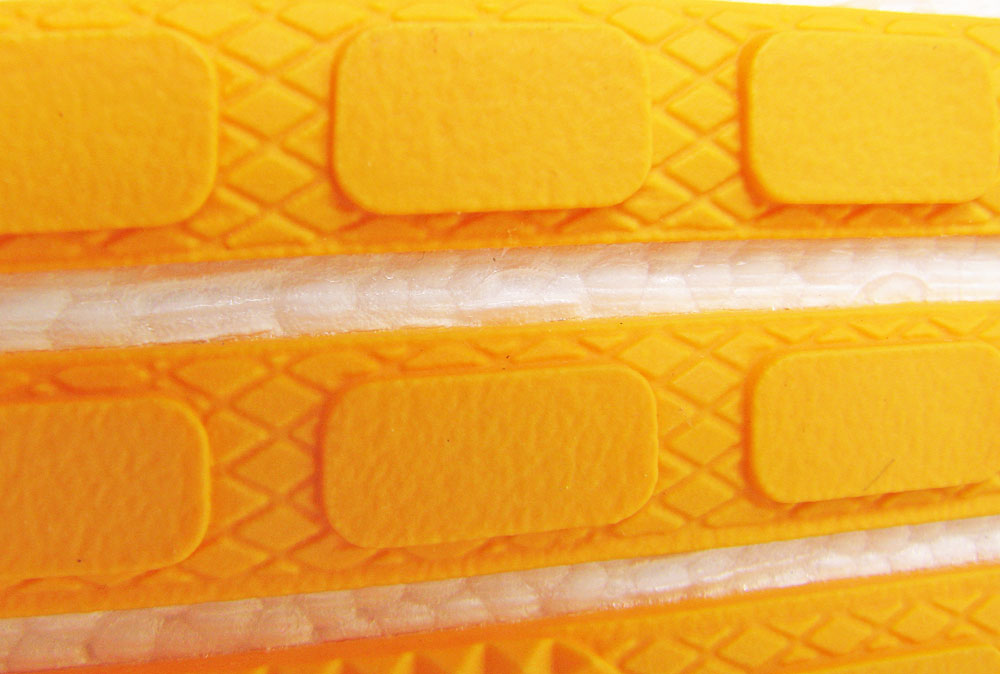 While the outsole geometry and the lug design helps, the good traction quality is also the outcome of using soft rubber. The outsole isn’t blown rubber but its pliable nature allows it to flex along with the foam midsole. This also means that repeated landings and take-offs do not result in accelerated wear and wear.

The midsole is made of Polyurethane so there’s no loss in cushioning – we’ve seen that pattern across Saucony Everun and adidas Boost based shoes. 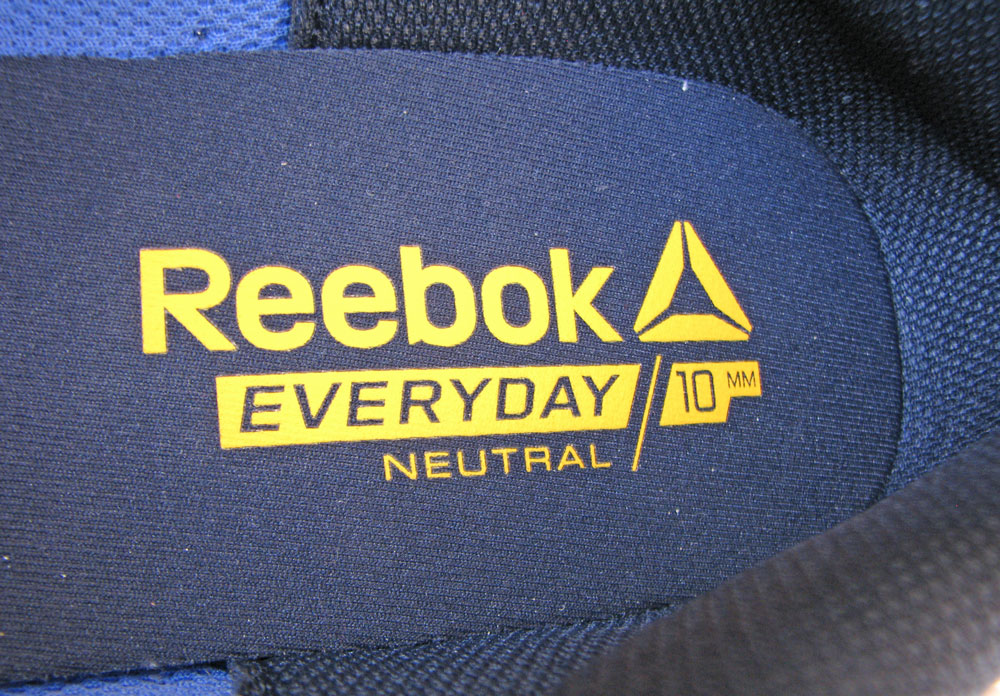 A basic insole is glued to the fabric lasting below. As a result, the ride does not have a squishy upper layer; nearly all the cushioning is contained inside the Floatride Energy’s midsole.

There’s no sink-in cushiness here, and that’s what makes the shoe very versatile.

Not having a firmer EVA rim like the Run Fast has its advantages and drawbacks. On one hand, the full-length, single-density foam midsole has soft sidewall edges – the hard boundaries of the Run Fast’s rim might not be liked by everyone. 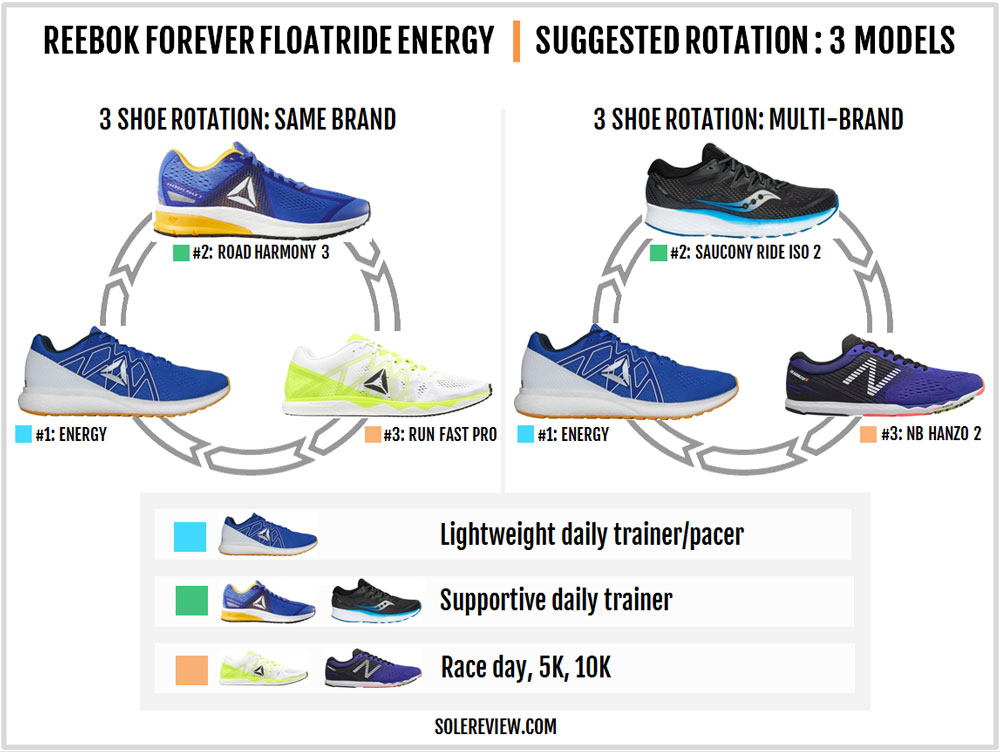 On the flip side, the relative lack of structural rigidity limits the Forever Energy’s pace range. Though the shoe feels great for a wide variety of runs and speeds, you end up wishing for a ‘faster’ shoe once your speed exceeds 4’30” per km.

Though the Run Fast can be that shoe, it makes more rotational sense to get the Run Fast Pro instead. It’s a $250 shoe, so it might be worth waiting till the existing lime color goes on sale. In the meanwhile, the New Balance Hanzo SV2 is the next best thing for a lot less.

You can use the Forever Energy as a daily trainer without worry, but if you want a slightly more supportive ride, you can try the Reebok Harmony Road 3 or the Saucony Ride ISO 2. 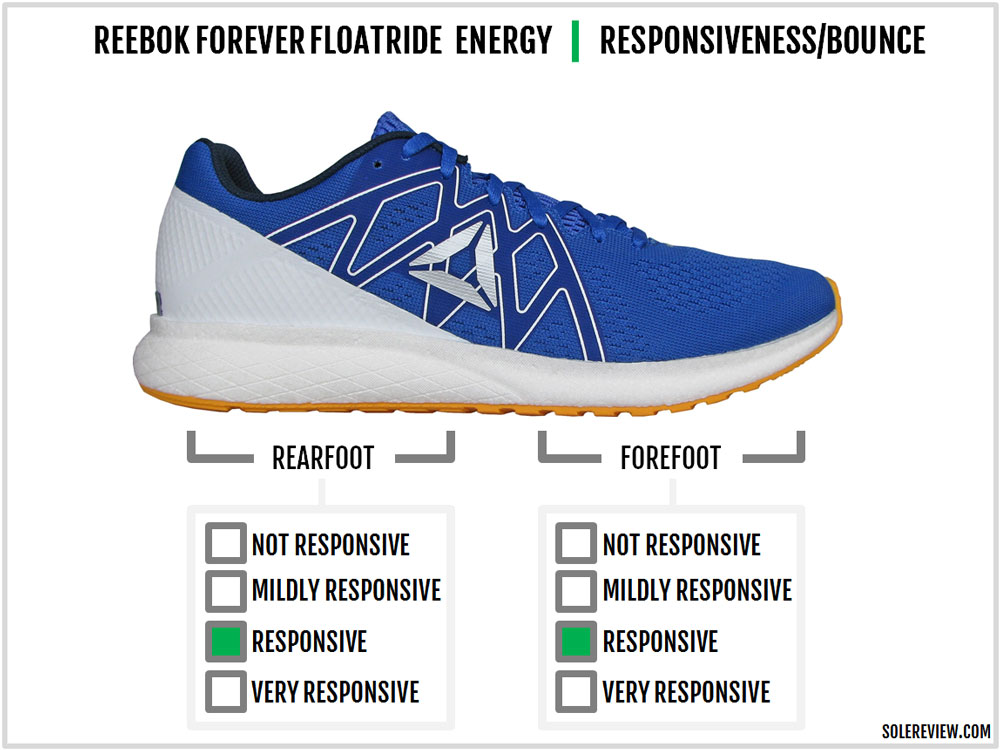 For your daily running needs and long-distance runs, the Forever Floatride Energy works very well. The midsole has plenty of cushioning throughout the midsole no matter where you land.

Since this is a fine-tuned version of the adidas Boost foam, you get the responsiveness but without the noticeable softness. Long-distance runs of over 10 miles are a comfortable affair, and it becomes obvious that the midsole uses a superior cushioning material. On longer runs, the feet feel fresher in the Reebok than they do in, say, the Nike Vomero 14.

It’s also easy to forget that you aren’t running in a shoe from a higher price segment. The Forever Energy offers great value for its price, a trend which we hope other brands would emulate.

The Forever Floatride Energy is also an excellent do-it-all shoe. Runners who are used to firmer neutral trainers like the Saucony Ride ISO 2 will find the softer ride to be more comfortable for everyday runs. The Reebok shoe can also be used on the treadmill and flat gravel trails. 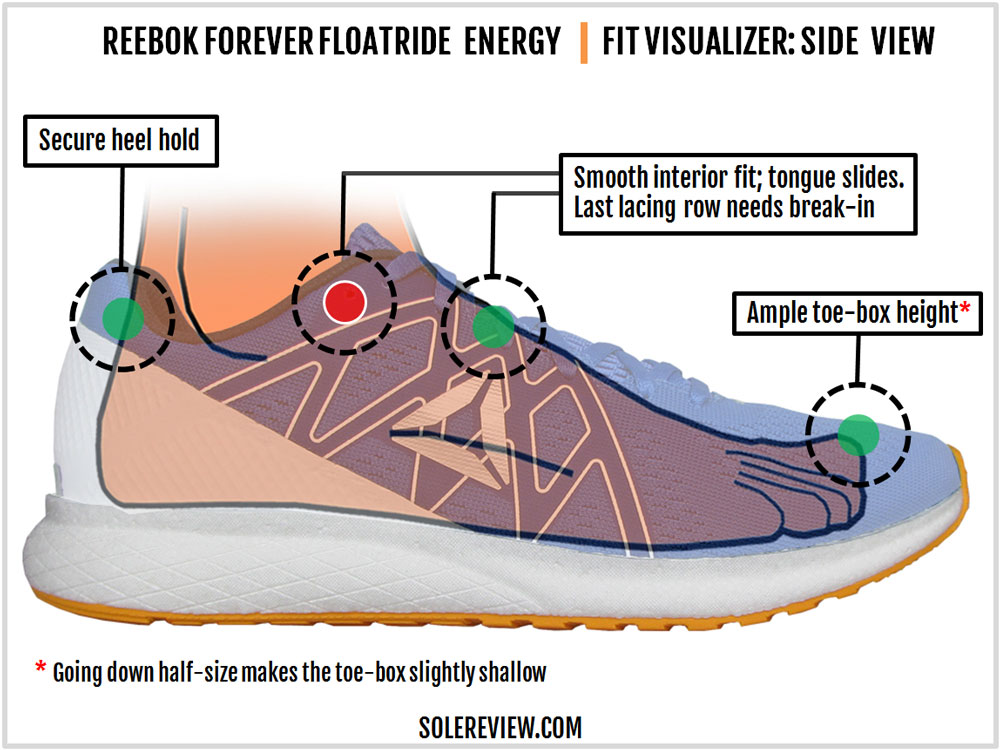 The first thing one should know about the Forever’s upper is that it fits a half-size larger. Meaning, if you usually order a US 10, then a 9.5 will suffice. But if you want a relaxed fit, then there’s no problem sticking to the US 10.

The extra room comes in handy during runs of 10+ miles when the foot expands a bit. The foot doesn’t feel constricted and the additional room works well together with the breathable upper mesh. Frankly, while a half-size smaller would make the fit ideal, we prefer the roomier upper for longer runs. 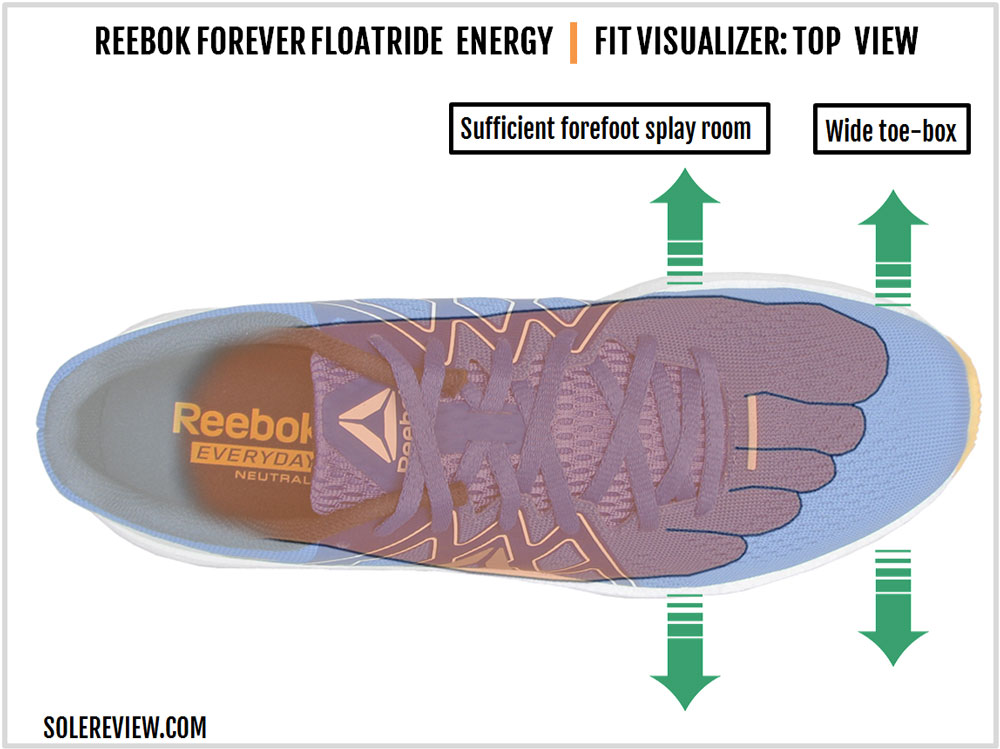 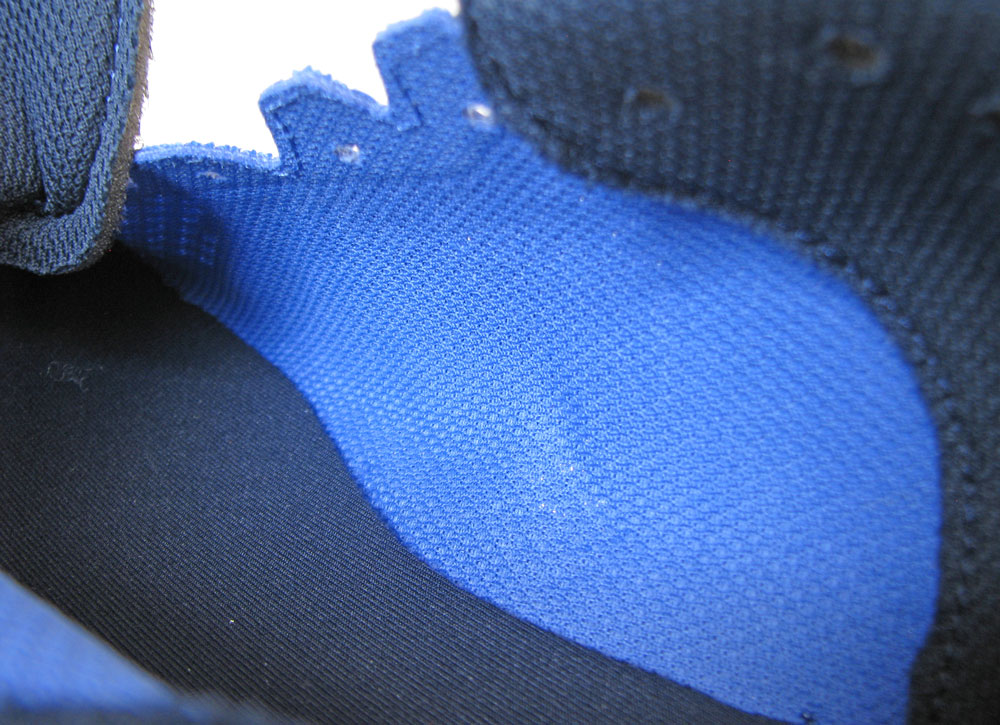 Buying a smaller size also makes the toe-box shallower and the forefoot narrower. This, by no means, is an issue, but just know that downsizing isn’t without its effects.

As far as upper designs go, the Forever Energy’s upper is very simple. A single piece of engineered mesh combines vented and densely knit zones for ventilation and support. The midfoot has a latticed film on both sides for aesthetic effect and structure reinforcement. Since there’re no internal seams, the smooth interiors sit flush over the foot. 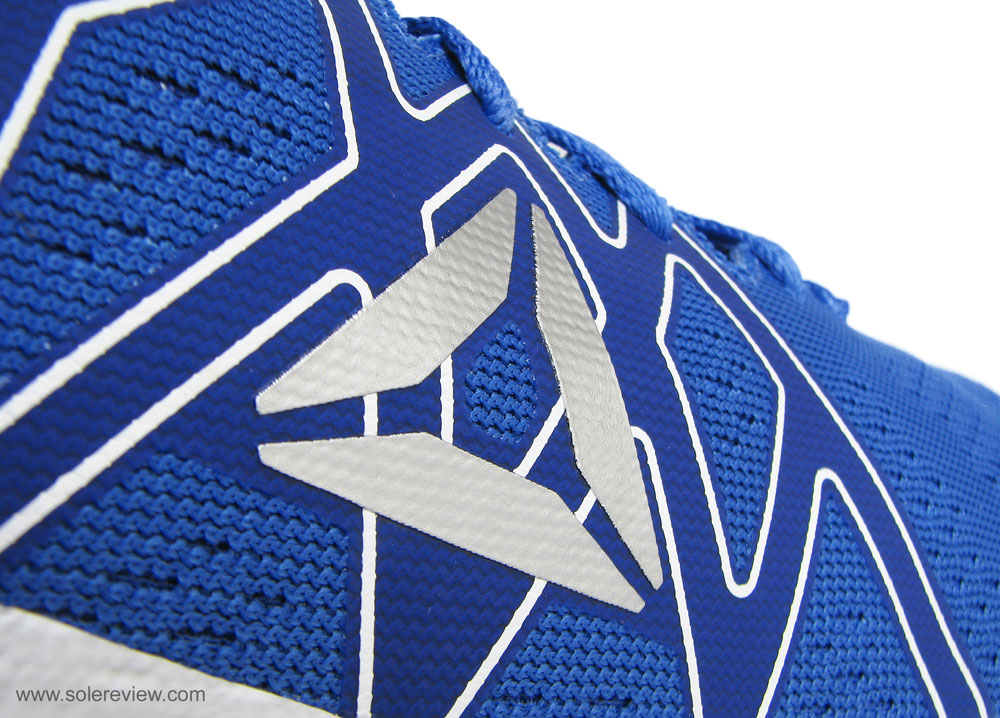 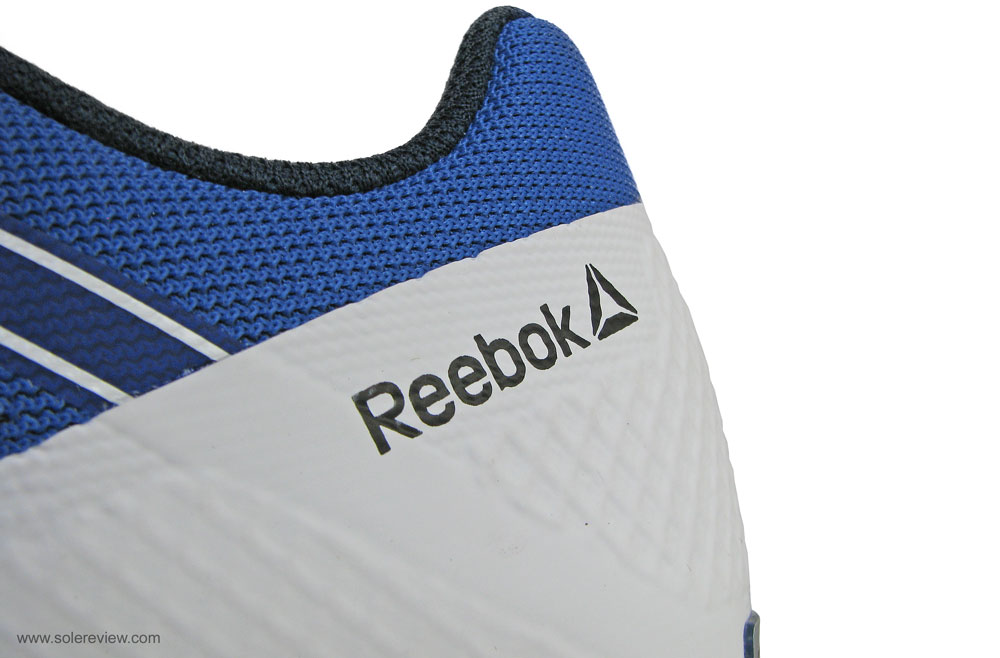 The midfoot and heel are covered by a non-porous film with a waffle texture and a reflective trim. The heel lock-down is decent with no slippage observed during usage. There is an internal heel counter but isn’t very rigid – the semi-flexible stiffener just provides enough support. The Achilles dip is slightly higher what we’re used to, but it’s soft and doesn’t cause any irritation.

Apart from the longer sizing, there are two small issues with the upper. The last lacing row is stiff and requires a break-in period. Although, this wouldn’t have been a problem if the tongue was wider and connected to a sleeve. 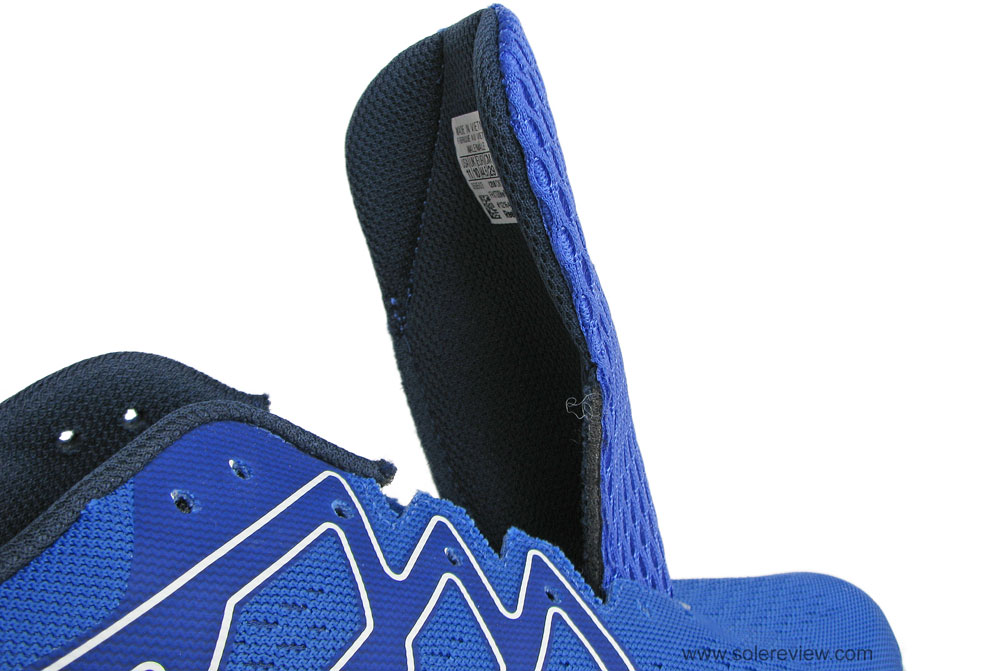 While the thin tongue sits flush over the foot and manages the lacing top-down cinch well, the lack of a gusset causes it to slide. So the inner lacing panel ends up resting directly over the foot, thus causing the sensation of stiffness. If the tongue was broader and didn’t slide, it would have created a padded layer in between.

The lace length is sufficient – as long as you don’t use the last row of lacing. If you do, then both the tongue and laces end up a few millimeters short for the task.

Lastly, we implore Reebok to get rid of its silly triangular ‘Delta’ logo and replace it with the graceful Springbok inspired logo. The shoes look so much better with the original logo. Reebok’s newest training shoe, the Nano 9 is proof enough. 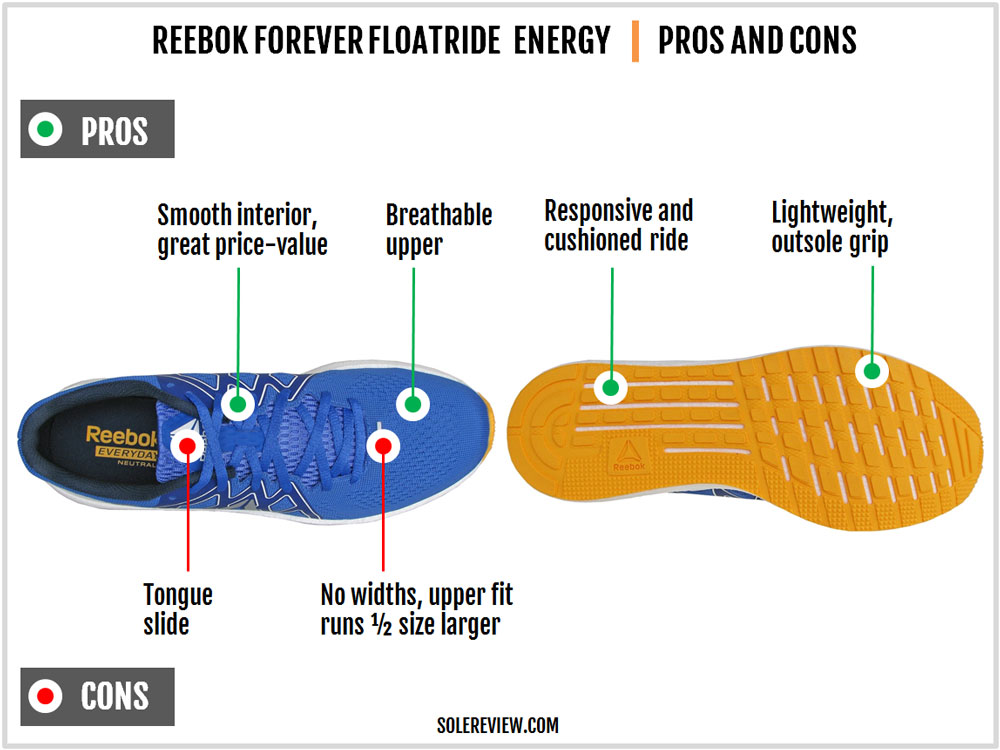 As we said at the beginning of this review, the Reebok Forever Floatride Energy is one of the best running shoes of this year. There’s a lot which the shoe packs for its $100 retail price.

The e-TPU midsole is cushioned and responsive without any of the mushy slowness; the grippy outsole flexes along with the midsole to work as a cohesive unit. The optimal balance of cushioning and support makes the shoe very versatile.

The upper fits a half-size larger so that’s something you need to be aware of. And just like adidas, Reebok shies away from offering widths. Except for the tongue slide and the break-in period required for the stiff lacing panel, the upper gets most things right – the interiors are seamless and breathable. 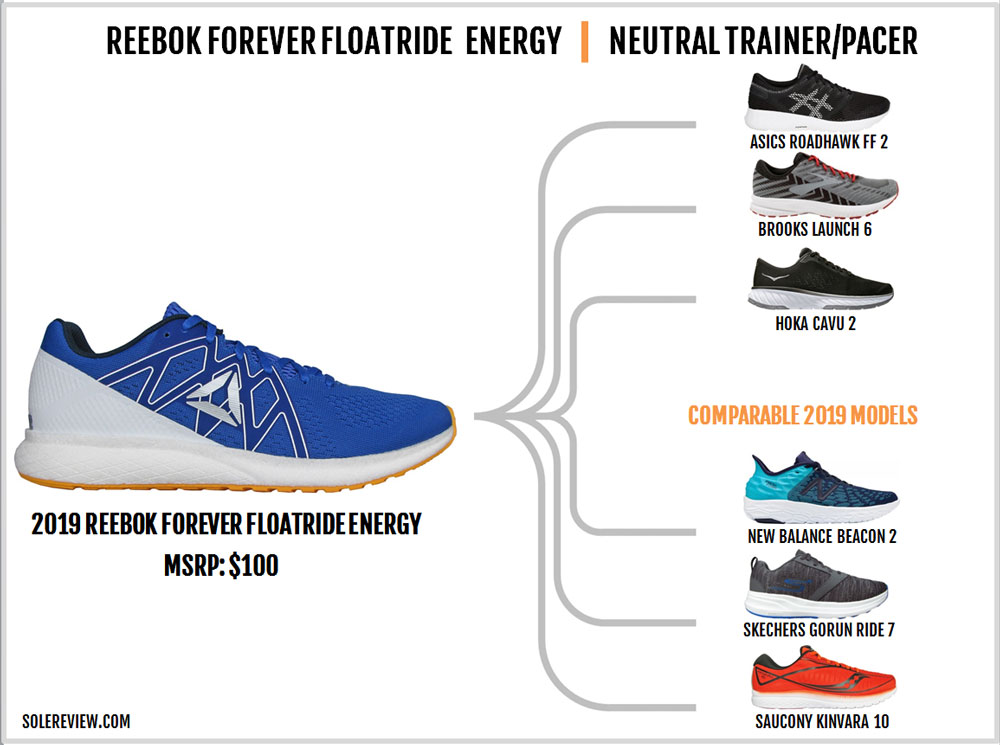 Given the well-rounded nature of the Forever Energy, there’s very little reason why you should buy any other shoe listed here. Ok, maybe the New Balance Beacon 2 makes a strong case as a lightweight cushioned trainer for mixed use. Even the Skechers GoRun Ride 7 is a decent buy.

While the rest of the shoes in this price class ($100-110) are competent products, you’re better off with the Reebok. For example, the Asics Roadhawk 2’s Flytefoam midsole has ample cushioning in a lightweight package, but the ride doesn’t feel as lively.

The Brooks Launch 6 is one of our favorite shoes, and yet its firm ride might not appeal to everyone. The Hoka Cavu 2 and Saucony Kinvara 10 are lightweight trainers with a low heel-to-toe offset and relatively firm ride – again, not attributes which everyone would get behind.

Of course, if you disregard the constraints of the price-band, then there are plenty of other options. For example, instead of the Skechers GoRun Ride 7, you could buy the more expensive GoRun 7 with the Hyperburst midsole. That, or the Saucony Freedom ISO 2 with its full-length Everun midsole.