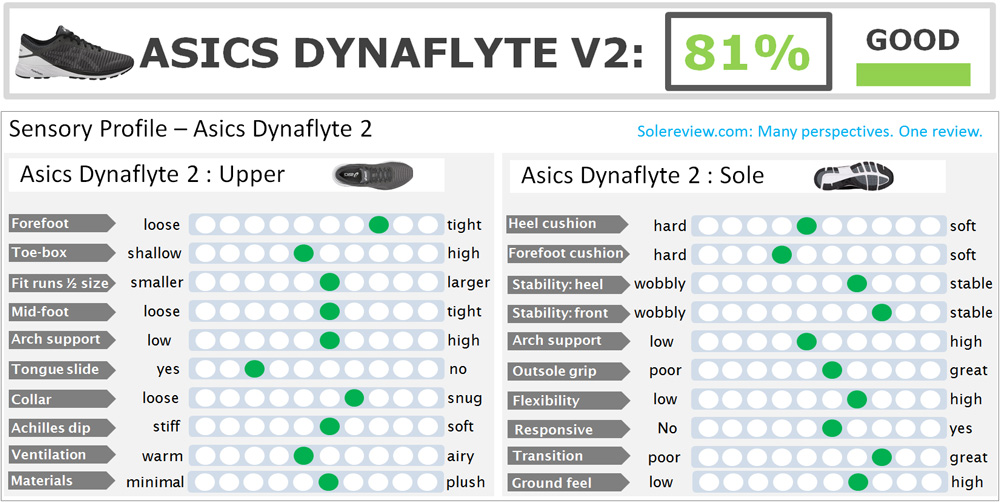 Asics hit a home run with the original Dynaflyte, a lightweight neutral trainer designed for tempo runs. The V2 has a softer ride and a more comfortable upper, along with a $10 price drop.
Lightweight and cushioned, smooth and stable ride
Tongue slide, $130 MSRP is still expensive considering the $100 Roadhawk 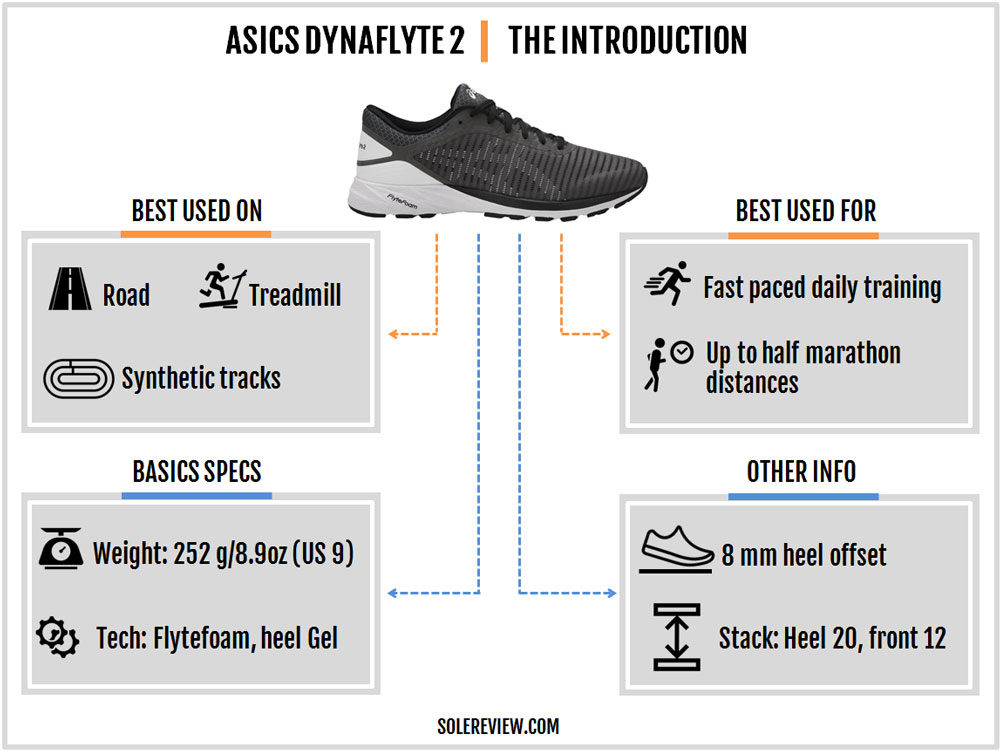 The Dynaflyte V1 was an important shoe for Asics. It took the Flytefoam midsole from the uber-expensive Metarun and made it relatively accessible. The Dynaflyte also marked the transition from the decades-old combination of Gel and regular EVA foam to a cleaner design.

Sure, the Dynaflyte V1 had a rearfoot Gel pad, but its selling feature was the Flytefoam. Today, many Asics shoes such as the Roadhawk and the Kayano have Flytefoam, but the Dynaflyte is what started it all.

Looking back, Flytefoam was a great fit for the Dynaflyte. The Dynaflyte V1 was a lightweight neutral trainer suited for tempo runs, and the Flytefoam’s ride quality served the purpose well. Flytefoam was cushioned but had a firm quality which worked well for fast-paced running.

The 2017 Dynaflyte 2 carries over the same sole unit. It does feel softer in comparison to the V1 though, and this has to do with the density of the Flytefoam density. So if the midsole design hasn’t changed, what has?

The Dynaflyte 2 gets a completely redesigned upper. It’s got the same last, but everything else around it has changed. There’s a $10 drop in the retail price too, besides shedding 0.4 ounce of weight. 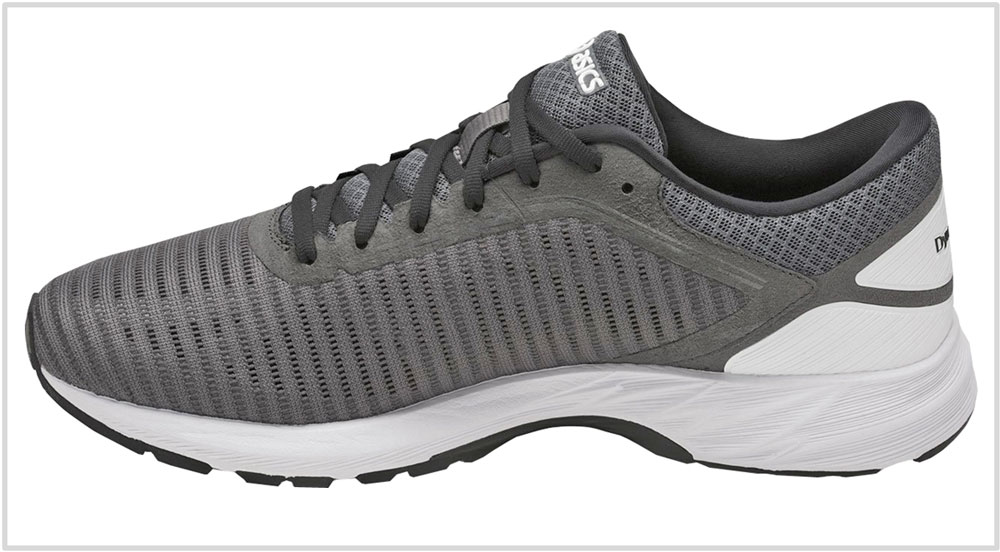 For a very long time, Asics resisted change. As the world moved on to a more minimal upper design, Asics stuck to its molded synthetic leather and stitched overlays. Well, not anymore.

The flagship Nimbus or the Roadhawk are signs that Asics’s transition to cleaner aesthetics is currently underway. The Dynaflyte 1 felt a bit ‘plasticky’ in comparison with its fused layers of shiny synthetic. 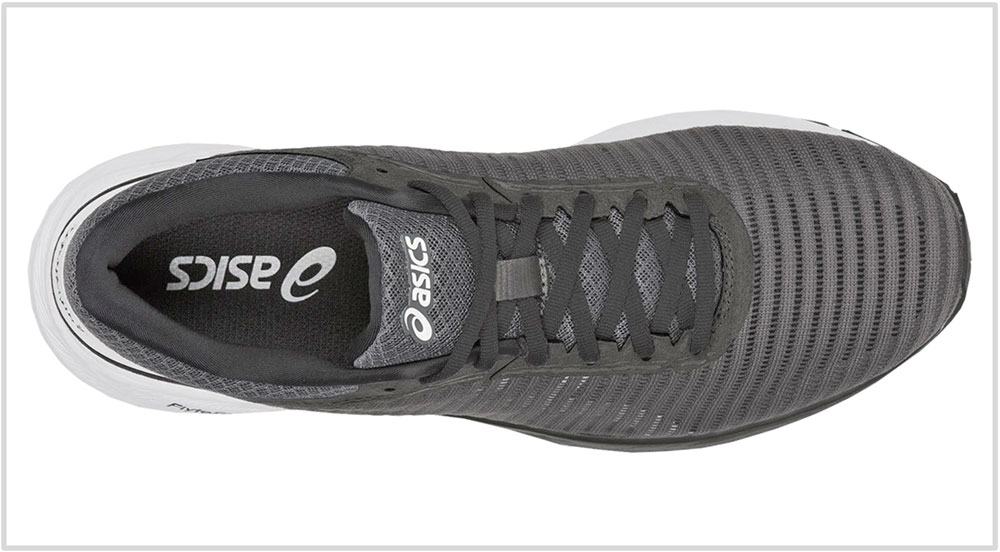 The V2 cleans up the toe-box, replacing the external bumper with an internal one. The molded midfoot Asics logo moves inside, and the inner side of the upper has no logo at all.

The lacing and heel areas use synthetic, but both have a matte finish instead of glossy. The previous Dynaflyte came with a molded tongue flap, and that has been replaced with plain mesh.

What’s good, though, is the use of flat laces on the Dynaflyte 2. The V1 had round laces; while those weren’t bad, the flat laces are a better fit for a fast daily trainer. 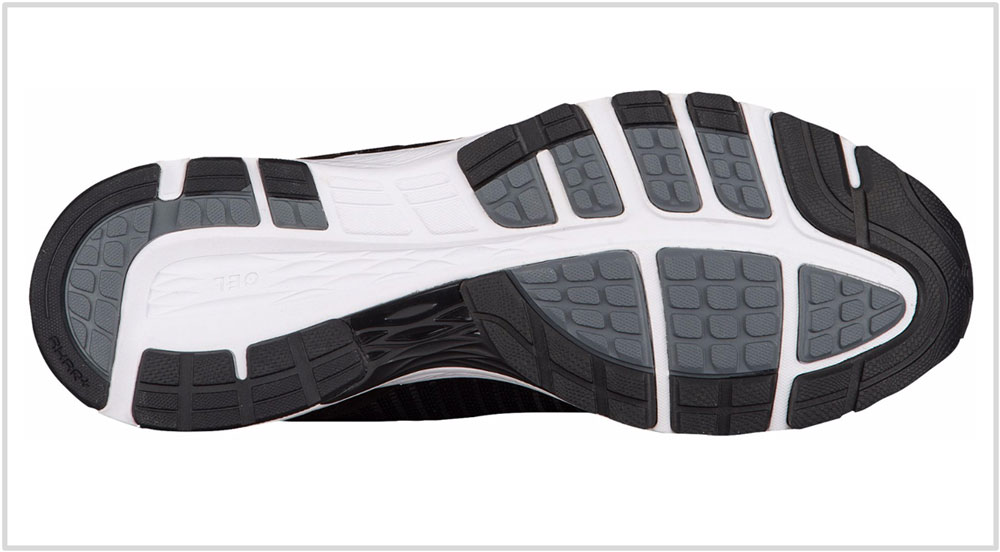 There’s no change in the midsole design. That said, the Flytefoam feels slightly softer in density than the Dynaflyte V1. Also, the SPA45 lasting layer replaces the Ortholite lasting from Dynaflyte 1. The removable insole used is the same as the previous version – it’s made of soft blown foam with plenty of softness.

As typical of Flytefoam midsoles, the foam has a fibrous texture – which is indicative of the blended composition. Asics does say that the Flytefoam is a mix of foam and fibers, and you can see that on the physical product. There’s a rearfoot Gel unit embedded within the midsole, though the shoe could have very well done without it.

The outsole has the familiar ‘Guidance line’ splitting it into two halves, and the midfoot has a shank – but only on the inner side. Rubber coverage is provided in high-wear areas, and there are flex grooves which help transitions.

It is worth mentioning that Asics offers a ‘gender-specific’ midsole profile for the Dynaflyte. While both the men’s and women’s versions have an 8 mm heel to toe drop, the stack heights are different. 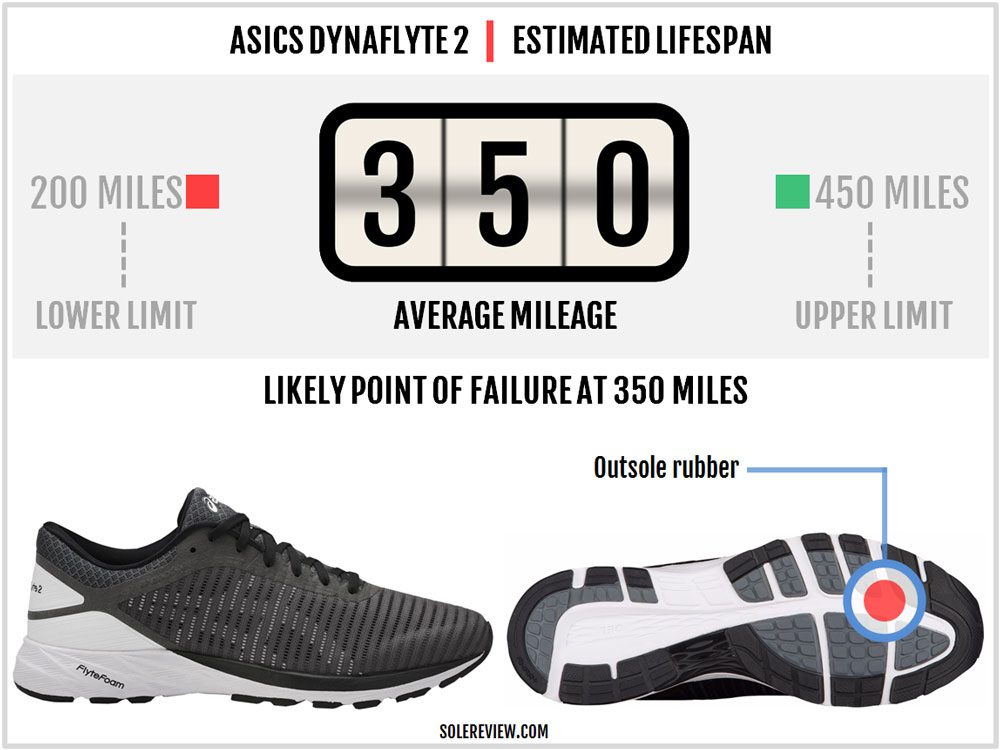 An average of 350 miles is what you should get from the Dynaflyte. The double-layered upper mesh feels fairly durable, and there is adequate outsole rubber coverage.

The Flytefoam is still EVA foam so it will lose its cushioning over time – just not at the same rate as regular EVA. 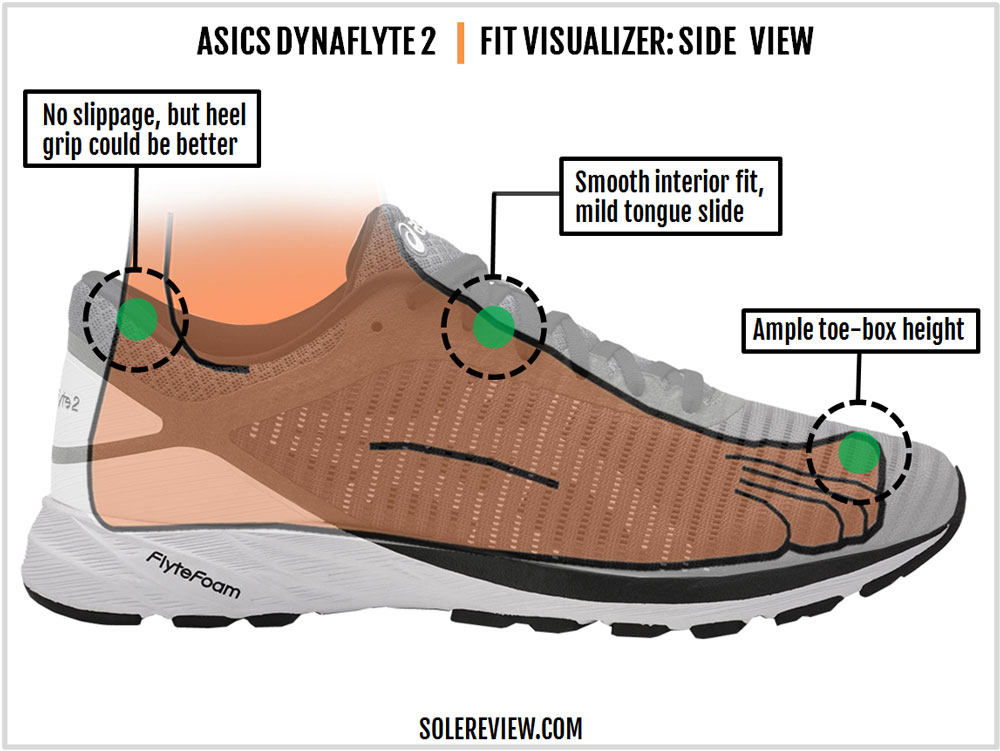 The Dynaflyte 1 had a snug fit, and so does the V2. The difference is that the V2 has a slightly more adjusting fit because of the upper design. Removing the internal toe-bumper also makes the toe-box less pointy and shallow.

The new upper mesh has an accommodating nature, so the snug-fitting forefoot still feels comfortable. The Dynaflyte’s open construction also helps breathability, which happened to be an issue reported on the V1.

Though not visible from the outside, there’s some internal support in the midfoot area. The inner side does not have the Asics logo but has a few internal straps sandwiched between the mesh layers. These structures help support the arch while in motion. 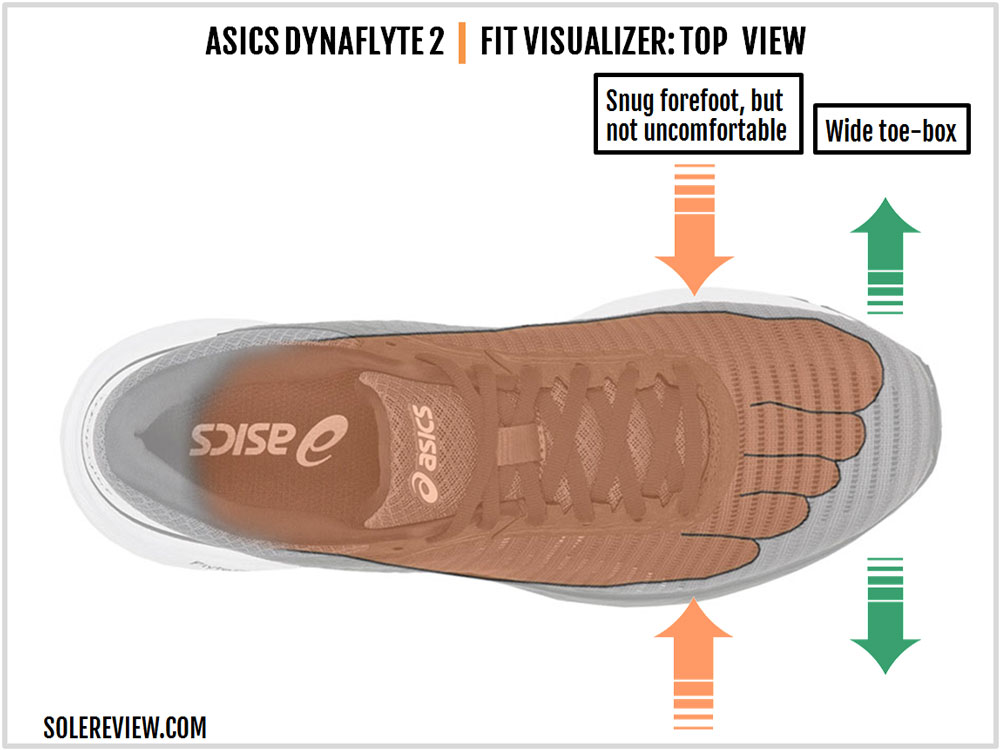 There’s a slight bit of tongue slide which is inherent to a sleeveless construction. There’s some padding inside, so there’s sufficient insulation from the lacing pressure.

The heel grips ok. It doesn’t have the reassuring grip of traditional Asics trainers, but you’ll not experience any slippage either.

The Dynaflyte 2 fits true to size. However, if you need a wider fit, you won’t get it, given the lack of additional widths. There’s only a single width available, so the foot will spill over the midsole edges if you have wide feet. 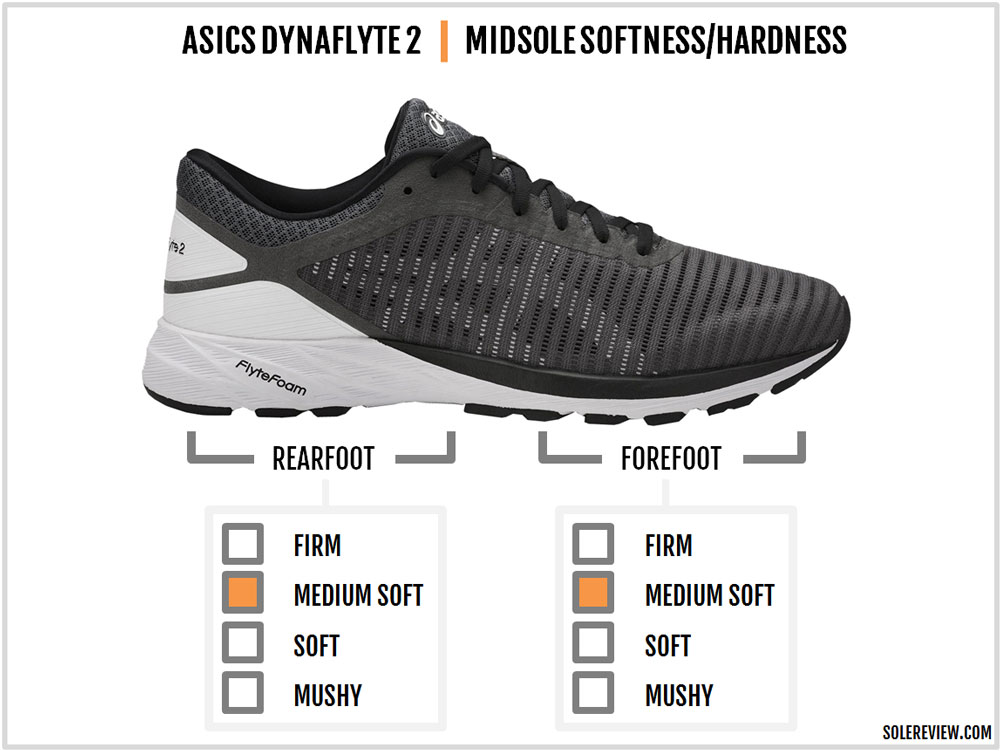 As mentioned previously, the Dynaflyte 2 feels a bit softer than before. This has to do the lower midsole foam density, and additional softness is provided by the blown-foam insole placed inside the shoe.

These small changes broaden the Dynaflyte’s appeal to a larger set of runners. The Dynaflyte 1 occupied the sweet spot between a regular trainer and a racing focused shoe. The V2 still maintains that positioning, except that longer runs such as marathons will now feel more forgiving.

The softness does not lead to a loss in consistency or the quality of transitions. A full-length Flytefoam midsole ensures a smooth ride, and the forefoot isn’t overly flexible. The lower forefoot stack heights facilitate efficient toe-offs, and the snug fitting upper helps too.

So worry not – the Dynaflyte V1 was a lightweight neutral for tempo runs, and so is the V2. The Dynaflyte works great as a track-training shoe too.

The new Dynaflyte is lighter. Redesigning the upper leads to a weight decrease of 0.4 ounces over the last model. This update is significant for a shoe in the 9-ounce class.

Stability is decent on the Dynaflyte. The combination of the low midsole stack and the balanced design keeps bias under control. 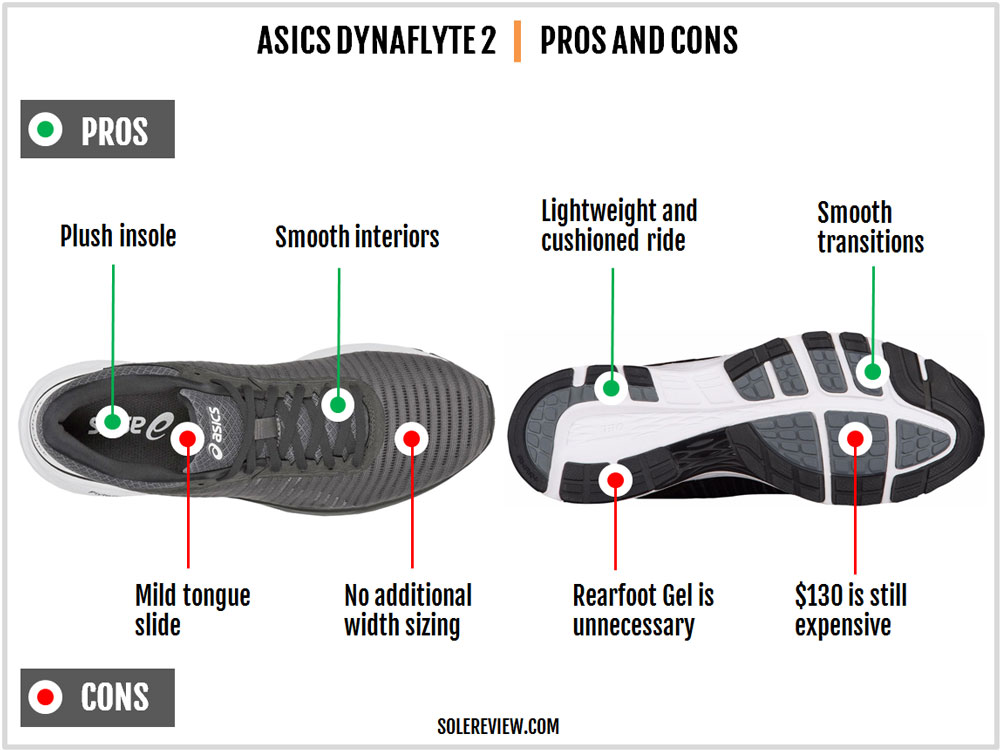 We’ve often said in our reviews that any brand has to manage their tiering strategy well. Having a clear, long-term differentiation plan between various models is helpful. Because this allows the consumers to see why a particular shoe is more (or less) expensive than the other.

Unfortunately, the Dynaflyte is the victim of a poorly thought out pricing strategy. It might be $10 cheaper than the V1, but it is $30 more expensive than the Roadhawk FF. Why? If both shoes feature a full-length Flytefoam midsole with similar material specs, then why the huge gap?

Barring the pricing mix-up, the Dynaflyte shines in most areas. It’s got a cushioned ride which works for a variety of runs. It has smooth fitting interiors, and the shoe’s sub 9-ounce weight feels great during runs.

Sure, the shoe does not have optional widths, but that’s not a deal breaker; nor is the lack of responsiveness. The marketing emphasis has always been about durability and low weight – and the shoe delivers on both.

At an MSRP of $110, the Dynaflyte would have been perfect. This is the only reason why we docked some points off the overall score. Otherwise the shoe would have scored in the high eighties.

The Dynaflyte 2 has a sole composite which is identical to the 1 but delivers a ride quality which is marginally softer. The V2 is also lighter by 0.4 ounces over the previous version.

With the new upper design going the minimal way, the interior fit is more accommodating than the Dynaflyte 1. Ventilation is improved this year, helped by the new mesh and fewer overlays.

Other changes which meet the eye are cosmetic. The fused synthetic changes from glossy to matte, and some molding details over the tongue and the midfoot have been removed. 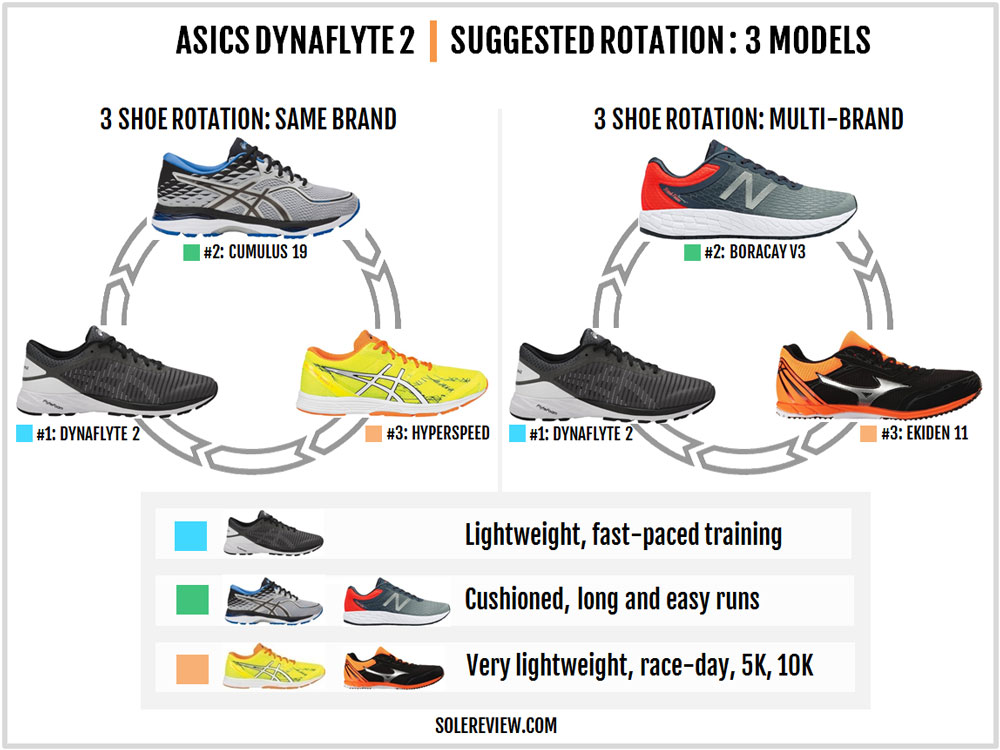 The Dynaflyte fills the role of an in-between shoe rather well. So the right thing to do here would be to seek shoes at either end of the spectrum. The Cumulus 19 is a decent daily trainer from Asics, while the Hyperspeed 7 is good for race days.

On a side note, we’d rather prefer the gripper DS Racer 11 instead of the Hyperspeed. Its mild-support positioning is the only reason we haven’t included it in the infographic. But though the DS Racer isn’t strictly a neutral shoe, don’t let that scare you from using it as a 5K or 10K race shoe.

We’ll try a different multi-brand approach. We recommend the 4 mm drop New Balance Boracay V3 as a daily trainer. It shares the snug upper fit and the ride consistency with the Dynaflyte. The Boracay is often passed over in favor of the cushy 1080 or the lighter Zante, but it is an under-rated product.

For 5K and 10K races, we’ll go the racing flat route. Not only is the Mizuno Ekiden 11 lightweight and breathable, but it has excellent grip on road and track. 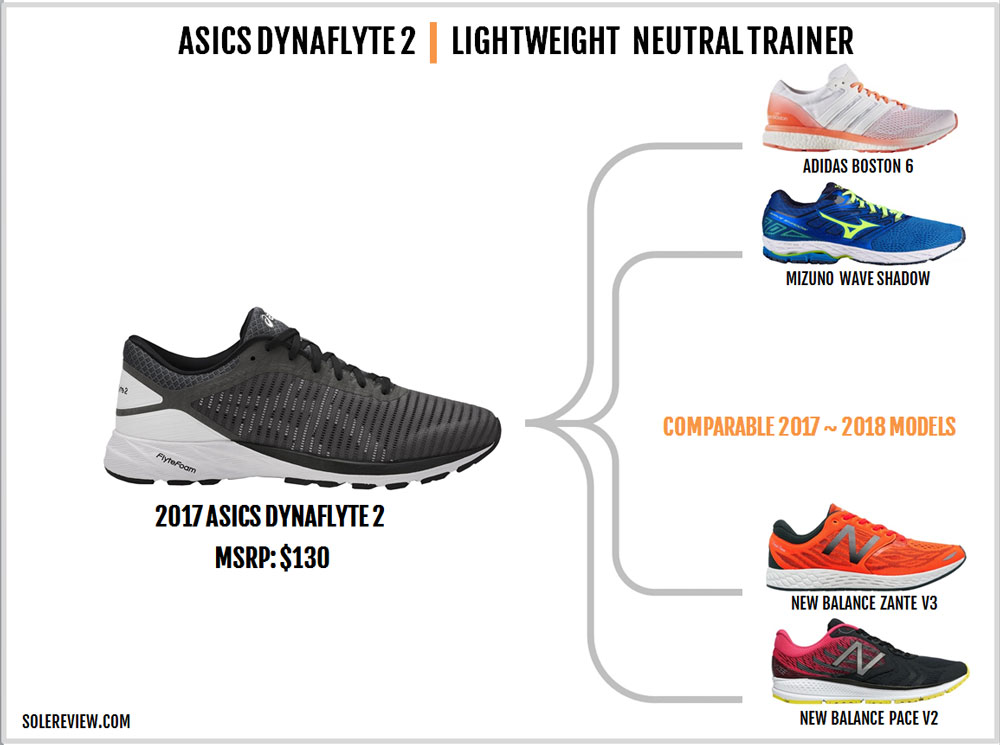 So which shoes compare to the Dynaflyte? The adidas Boston 6 is a direct competitor, both in positioning and price. If you’re shopping New Balance, then the Vazee Pace V2 is similar from a usage perspective. In case the Vazee Pace is too firm for your liking, then the Zante V3 is a softer alternative.

Mizuno has a different ride quality than the rest, but the Wave Shadow performs a similar role. If the Shadow sounds unfamiliar, that’s because it is a new introduction for 2017. It replaces the Wave Sayonara which was discontinued after four years in production.