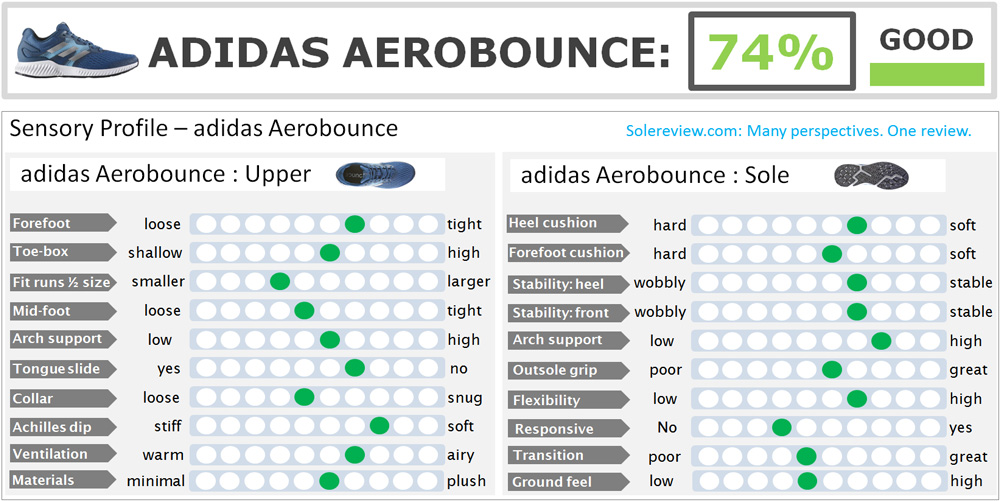 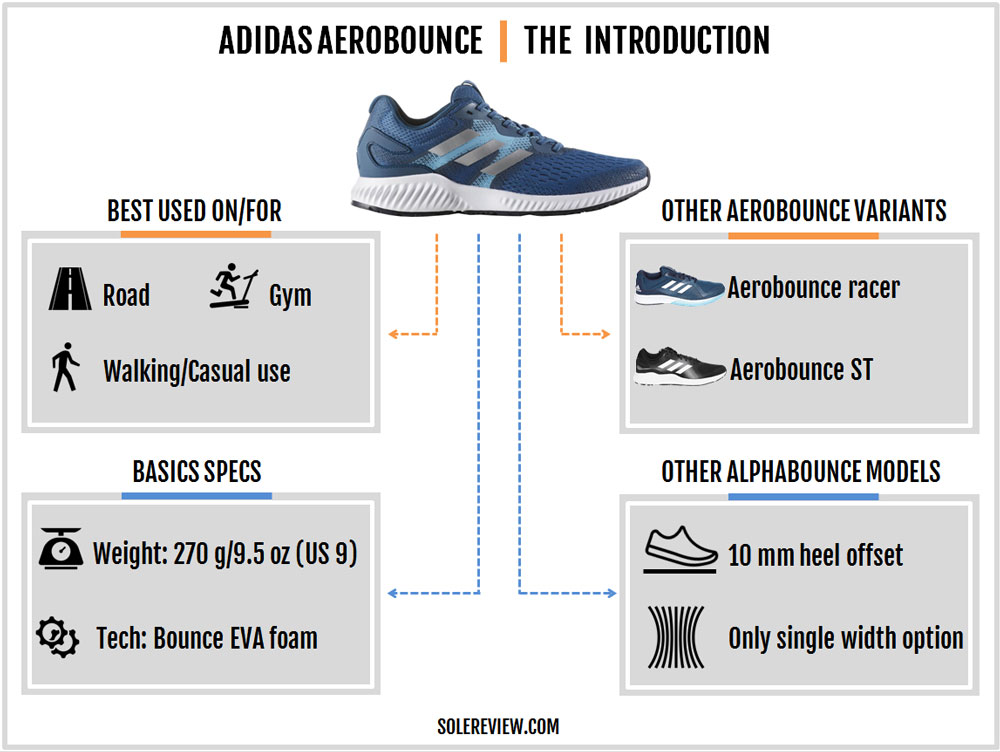 The adidas of today isn’t the adidas of five years ago. Its product line has evolved drastically over the years. Today, when one mentions ‘adidas running,’ that can mean one of the three things. Either a shoe is a pure retro play like the NMD. Or we’re talking about a shoe that is designed for pure performance. Say, a Boston 6 for example.

The third kind is a bridge between lifestyle and performance. Of late adidas has introduced many such models, some of which we’ve reviewed on this site. What we said about the Alphabounce sums the category perfectly well – ‘a quasi-running shoe with limited athletic potential.’

So while shoes such as the Alphabounce, Pureboost DPR and its kind aren’t bad running shoes, there’s a limit to what you can do in them. These products are designed for casual everyday use while possessing mild athletic capabilities. Like that short run around the block or a brief workout on the treadmill.

The Aerobounce is of the same casual-performance class. It’s an entry-level running shoe which caters to the sneaker aficionado; its soft outsole targets a casual-wear consumer rather than a core runner.

We must point out that there are three versions of Aerobounce available. The first is the regular version, a product which we’re reviewing today. The second is the Aerobounce ST, a stability version with a firmer medial post.

The third variant is the Aerobounce Racer. The upper is a toned-down version (no plastic heel clip) of the regular Aerobounce, and the midsole has a lower profile. 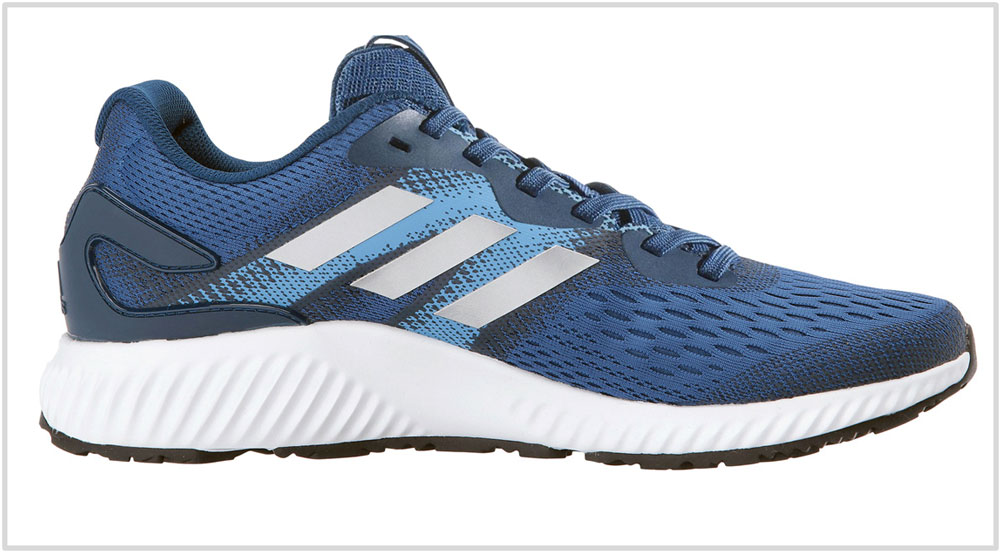 The upper has a basic spec level. The tongue and heel lining use materials which feel entry level, though some detailing is provided by the external heel clip. Most of the upper is made of not-so-premium engineered mesh, with rubberized printing over the toe bumper and the midfoot.

The Aerobounce gets a proper set of lacing rows. Many lifestyle oriented adidas models have fewer lacing rows which tend to apply uneven pressure. The Aerobounce does not have that problem. Flat laces pass through six rows of eyelets, with the seventh row reserved for heel lock lacing.

If you look at the shoe from the top, you’ll notice that the lacing is asymmetrical. The first row starts skewed to one side; this is meant to ease the top-down lacing pressure. 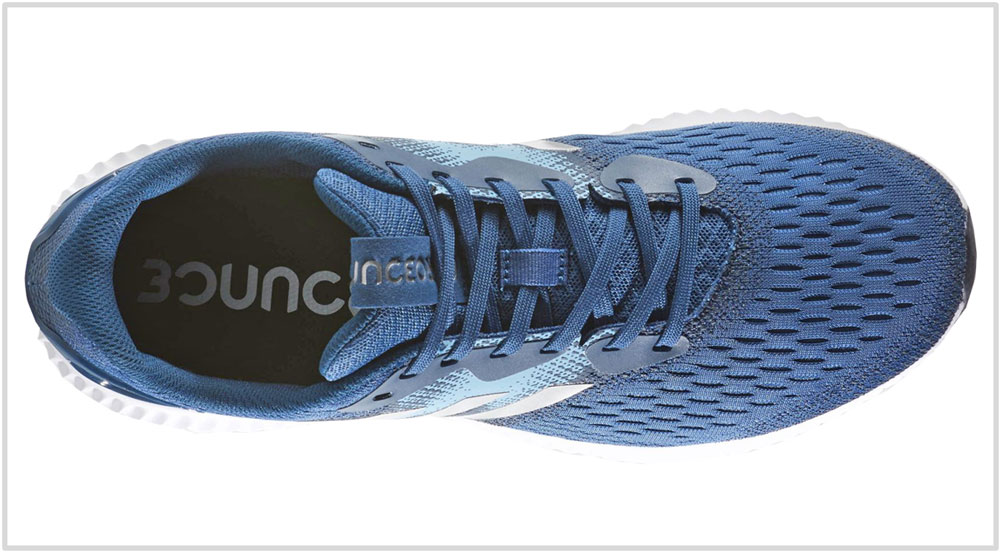 There’s a thick synthetic strip over the tongue which loops inwards. This trim is out of place on a running shoe, given its potential to irritate.

The Alphabounce had a similar feature, except that the latter had a bootie upper construction. 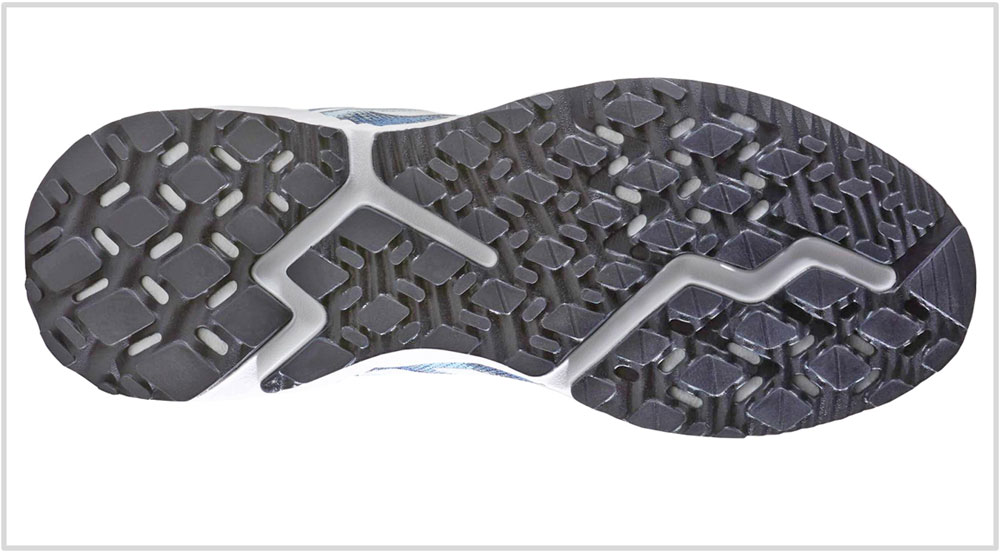 The Bounce material is just an EVA variant, so this isn’t to be confused with Boost. It doesn’t have the springy responsiveness of the latter; at best, the Bounce is a poor man’s Boost.

The Bounce platform is used in many $75 – $100 adidas shoes. Besides the Aerobounce, there’s the Alphabounce, the trail running Vigor Bounce and several variants of the Mana Bounce. There are Bounce models in other adidas categories such as cross training, golf, and basketball too.

Most road running Bounce models share a similar midsole aesthetic. The sidewalls have ribs molded into them, and except for the ST version, the midsole is single density. The midsole foam feels softer than the Alphabounce. Both shoes are Bounce based, but then different foam densities can be achieved even for the same material.

There’s no hard wearing outsole rubber underneath. The Aerobounce uses a softer variety of rubber instead of adiwear or Continental, and small lugs are raised over the surface. This design, when combined with the softness delivers great grip.

The outsole also has a peculiar placement of flex grooves. Instead of being located near the heel edge or under the forefoot, there’s a large one under the midfoot. Another one sneaks in from the inner forefoot and splits it into halves.

All the Aerobounce models lack a removable insole. There is an insole, but it is glued to the lasting. 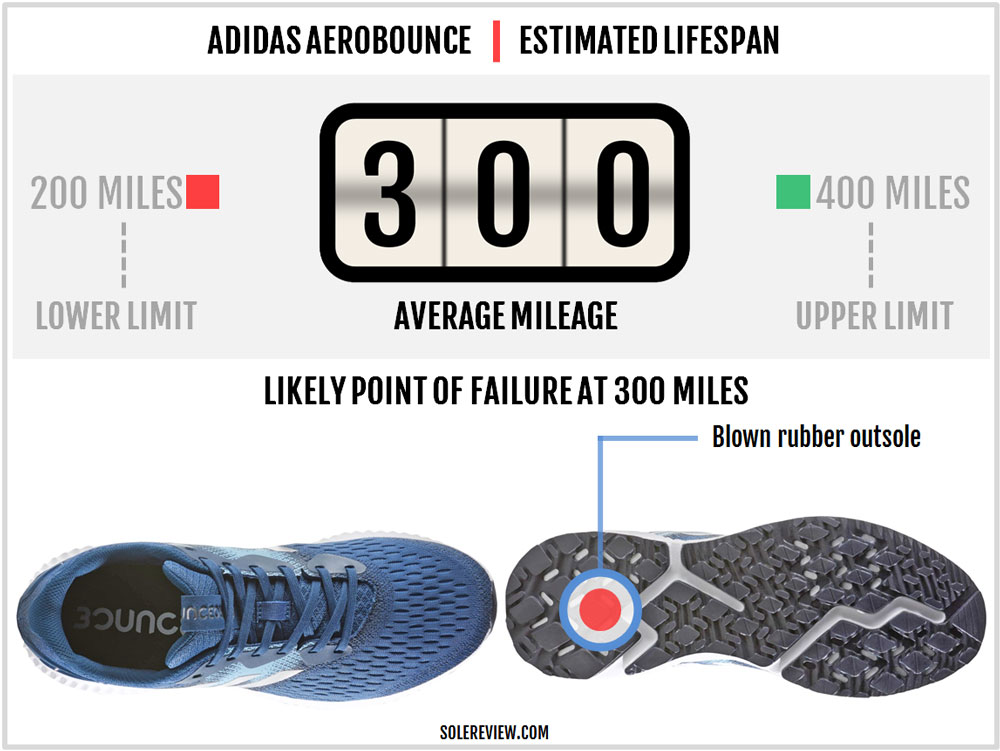 Like most shoes with a soft rubber outsole, the average lifespan will be between 250 and 300 miles.

The Aerobounce does not use the durable Continental or adiwear compound, so it will have a shorter life than models which have those soles. The upper should outlive the outsole; the mesh feels pretty durable. 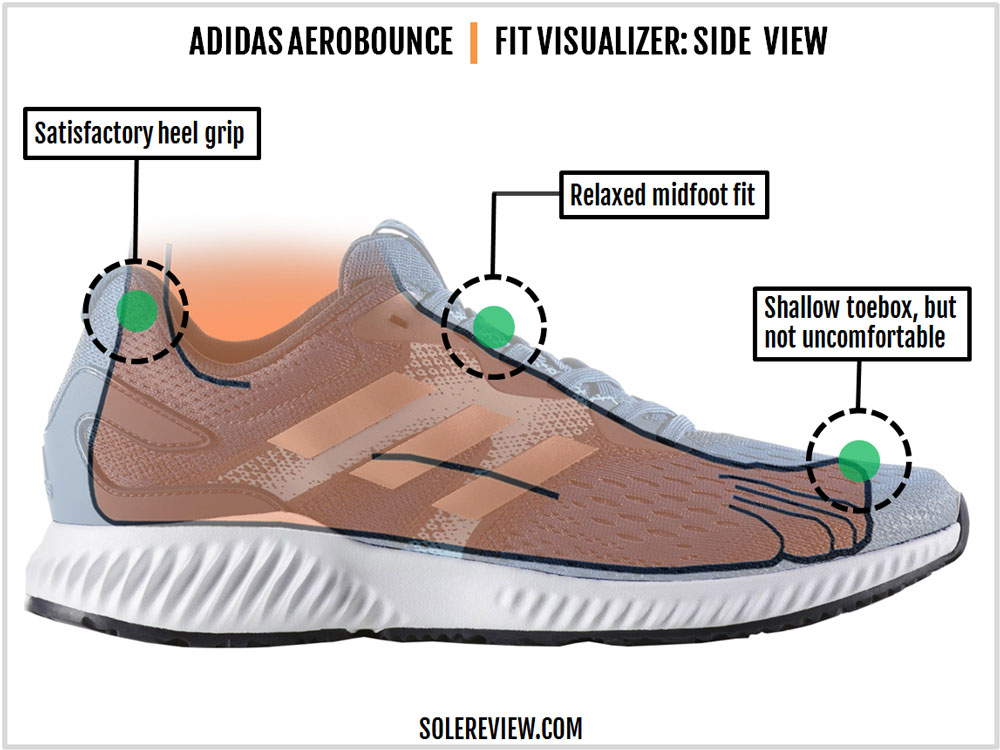 The Aerobounce fits small. We feel that the structured heel counter pushes the foot forward. This makes the Aerobounce’s toe box feel a bit shallow, so try before you buy.

The forefoot has a snug fit, but relaxed in comparison to the Alphabounce. 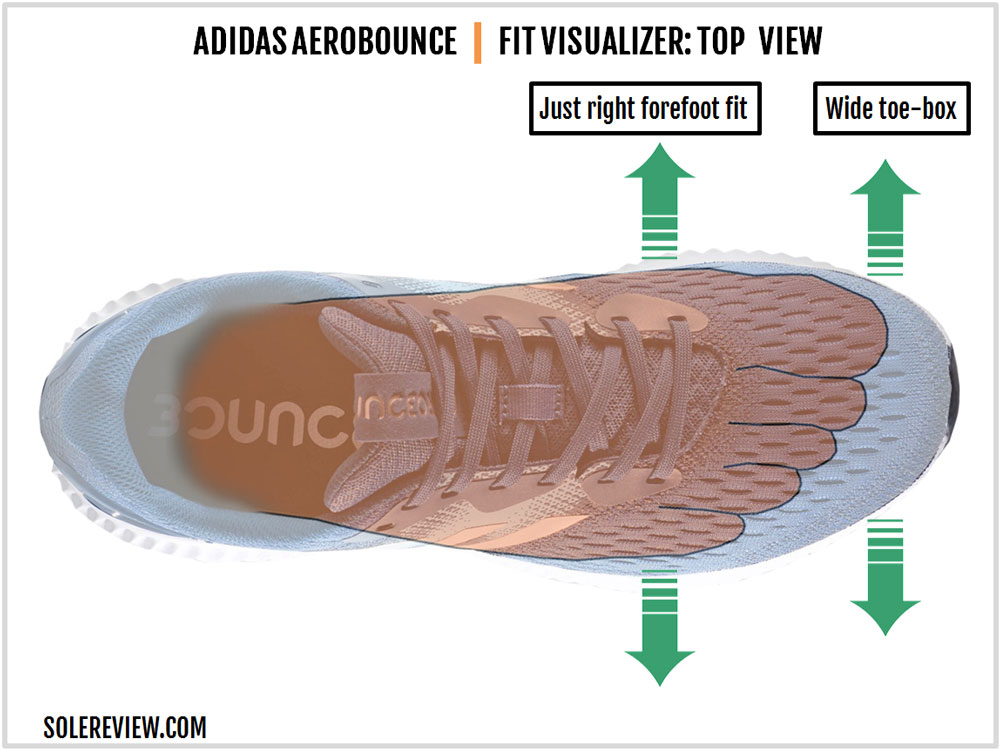 There are no complaints about the midfoot’s relaxed fit, except for the thick strap over the tongue. Also seen on the Alphabounce, this decorative trim is functionally unnecessary. If laced tight, the strap becomes a potential irritant.

The heel grips well due to the inwards curve and the thick external counter. But you get this feeling that the Aerobounce’s materials are very basic. You don’t get the premium interior feel which is expected of a shoe which costs $100.

The engineered mesh looks clean and well-finished from the outside, but there’s no stretch at all. Also, the interiors feels stiff over the foot, a sensation which decreases comfort.

One might argue that an $100 MSRP merits a basic spec package, but we beg to differ. More on this in our pros and cons section. 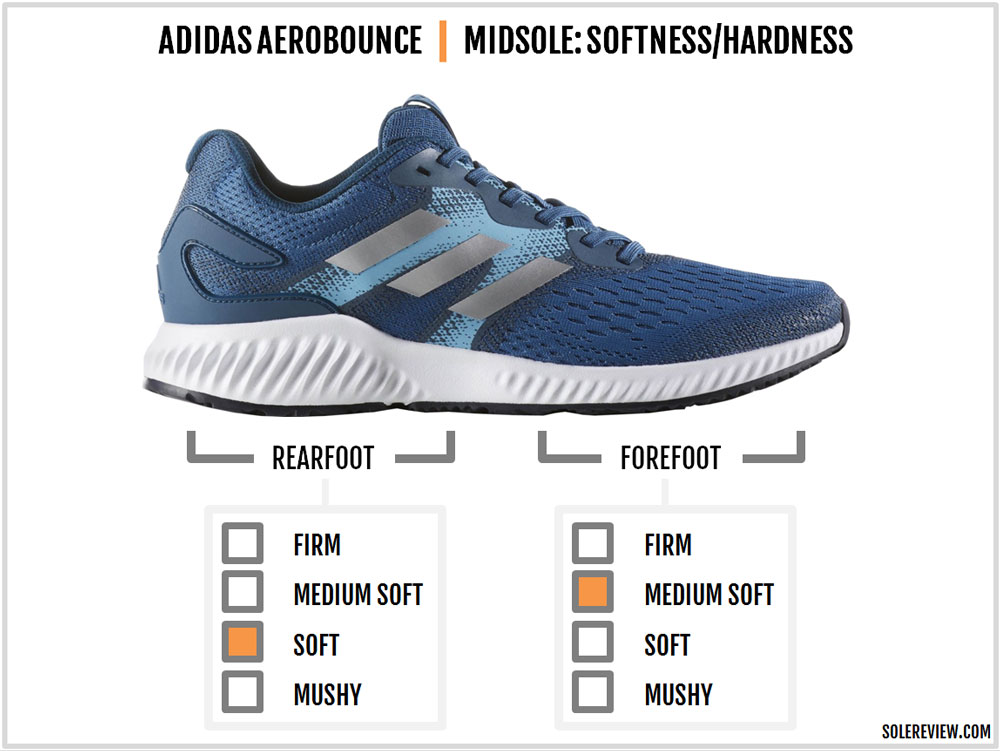 The Aerobounce has an overall soft ride. The rearfoot feels soft due to the thick midsole stack and the soft outsole, and the forefoot also feels cushioned.

Remember that this a casual-performance crossover, so the design intent reflects in the ride quality. The Aerobounce has a lazy quality of transitions.

There are several factors which contribute towards sluggish transitions. The flex grooves have a strange placement on the outsole. The thick one under the midfoot slows down transitions, and the forefoot splitting groove doesn’t help either.

The forefoot groove is pretty wide, so it decreases the base (grip) area for the foot to push off from. Lastly, the soft midsole and the outsole robs the Bounce of whatever snap it had to begin with.

Also note that while the Bounce is soft, it doesn’t have the spring-back quality of Boost-equipped shoes. However, the midsole feels well padded so you can use it for shorter runs around the city. After all, that’s what it is designed to do and nothing more. 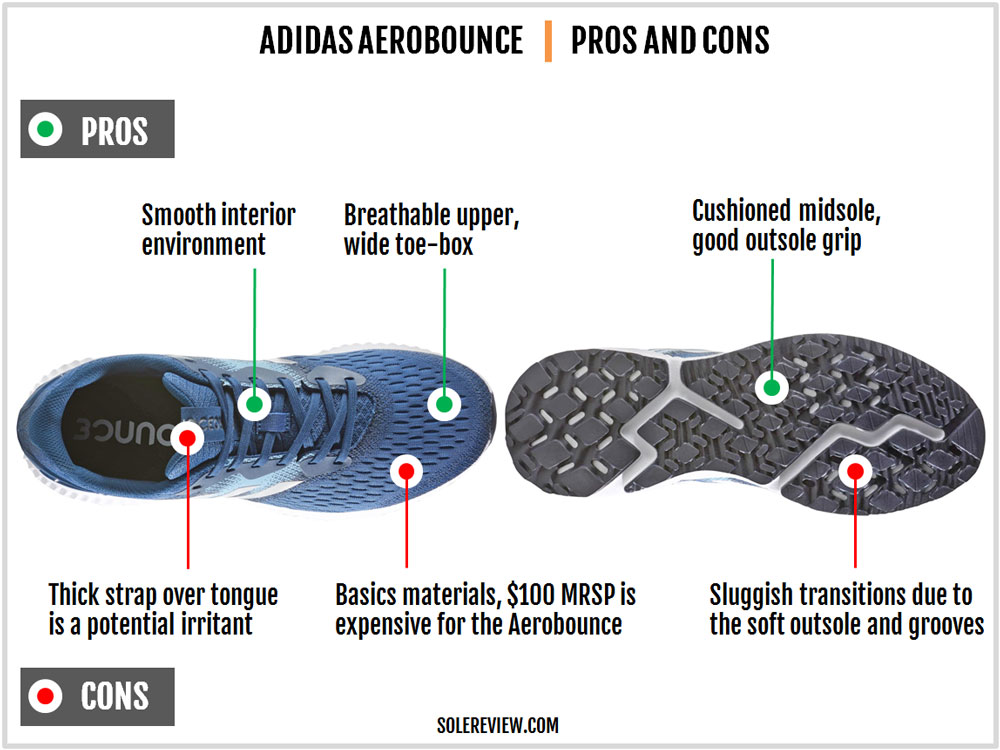 Besides the transition sapping ride quality and small things like the lack of optional widths, the Aerobounce’s pricing merits a discussion.

One might think that the $100 Aerobounce is value for money. But it is priced 20% higher than it needs to be, if you consider the multiple Bounce models offered by adidas across categories.

There’s the Adipower Bounce Golf with spikes and all. You also have the Basketball Bounce shoe with a multi-density midsole. Though not of the running category, both these shoes are at $100 and offer more material value than the Aero. The Alphabounce is $100, but anybody can tell that shoe looks and feels more premium than the Aero.

Other basic Bounce shoes such as the Mana Bounce 2 and Racer are at $80 and $75 respectively. Even the trail-focused Vigor Bounce retails for $82. And let’s not forget that adidas sells the Response Boost at the same price, though its distribution is limited.

An MSRP of $80 is what the Aerobounce deserves considering its basic materials and the lack of either adiwear or Continental. Oh, by the way, the cheaper Mana Bounce uses adiwear rubber.

By now, you must have a fair idea of what the Aerobounce is. It is a lifestyle-performance crossover with a soft ride and basic materials. Even at $100, it isn’t the best value so do consider alternatives. We’ve laid out some of the options in the next section. 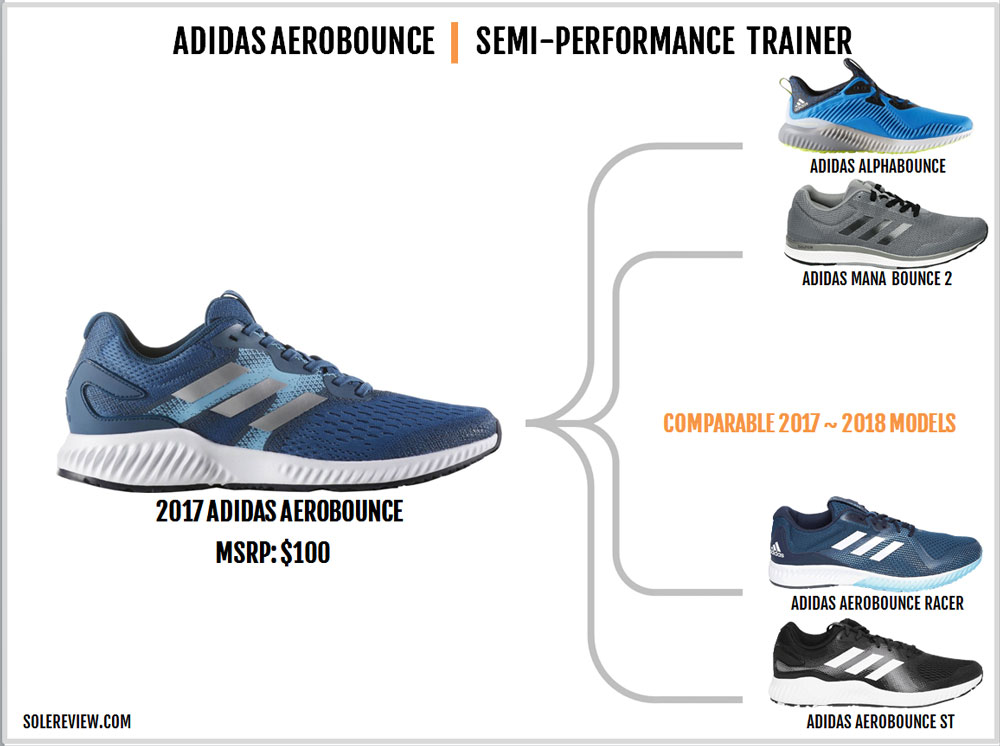 The Aerobounce has two other variants, so they’re worth considering too. The Aerobounce Racer is a toned-down version with a lower profile midsole and an upper sans the plastic heel counter.

The Aerobounce ST has a firmer ride, thanks to the medial side support. What’s strange, though, is that both the ST and Racer have harder (more durable) outsoles. Only the regular Aerobounce has the flimsy outsole, so if you don’t mind the mild medial post, then get the ST instead. The ST’s outsole also has a wider footprint for better stability.

Priced below the Aero are the Mana twins. The Mana Bounce has a lower profile midsole, and the Mana racer is its faster variant. And of course, you have the snazzy looking Alphabounce.

But none of these are true performance running shoes. So what if you want a real running shoe within a similar budget?

The Nike Pegasus 34 is an excellent do-it-all shoe. Be it the responsive ride, the long-term durability, or the comfortable upper, the $110 MSRP shoes gets everything done, and then some.

It is worth spending the $10 upcharge over the Aerobounce to get a shoe which is better in every aspect. Even looks.