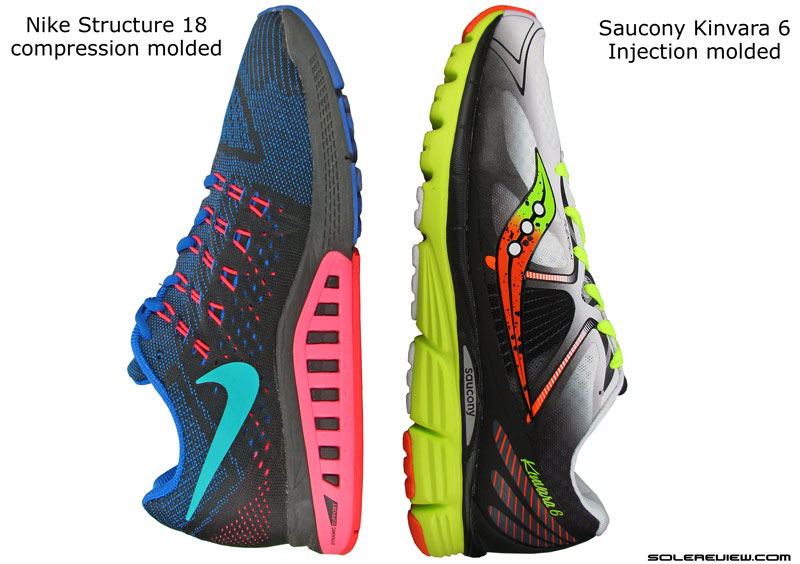 Each review on solereview has a summary right at the beginning. When you read that, you’ll probably come across the term ‘compression molded midsole’ under the ‘tech specs’ section. Depending on the shoe, it might mention ‘injection molding’ on certain days.

So what exactly do these terms mean? Does an injection molded midsole, or for that matter a compression molded one, make the actual ride quality any different? How does someone tell these apart visually?

We thought it would be helpful to write at length about these two midsole kinds, and how to easily distinguish a compression molded midsole from an injection type just by looking at the shoe.

The basics first. All running shoe midsoles are molded, which is the process of shaping a certain material. We see daily examples of molding everywhere.

Like a waffle mold for instance, where you pour in the batter and get a fluffy breakfast waffle a few minutes later. And the side ridges on that delicious cupcake also comes from a mold.

Footwear molds operate on the same basic principle, except that things happen on a much larger, industrial scale. In other words, it involves efficiently producing hundreds of thousands of midsoles each week, so that the finished shoes can be shipped on time.

Compression and injection molding happen to be just two of the many ways to produce midsoles. Although, as far as running shoes are concerned, these two methods (or a combination of) will account for over 95% of the models produced.

There are some models made from a poured Polyurethane method or 3D printing, but those are exceptions. We’ll briefly describe those processes too.

Compression molding, as the name suggests, is the process of compressing a block of EVA (Ethylene Vinyl Acetate) foam inside a metal mold. Much like a cupcake mold, the sides of these molds have a design etched into them.

When heat and pressure are applied to the mold, the material expands and fills the inside of the mold. Under pressure, the EVA foam takes on the shape of the mold cavity, including the design etched on its sides. 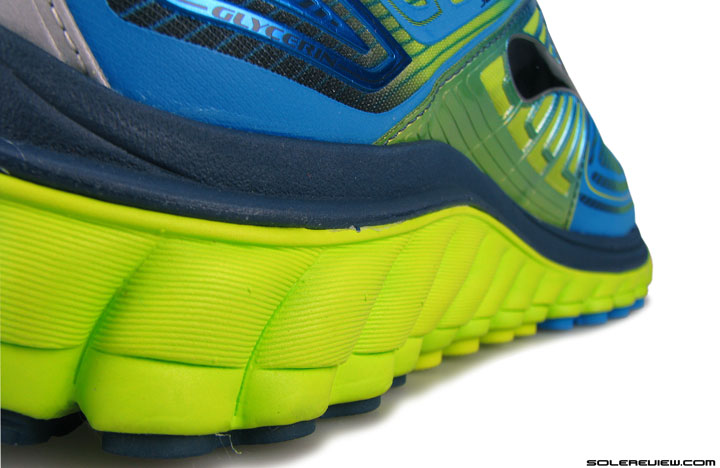 The design etched on the sidewalls of the metal mold transfers to the midsole design.

Open up the compression mold after the cycle is complete, and you’ll be rewarded with a freshly made running shoe midsole. The sinews and design which you see on the midsole sidewalls are inherited from the mold design.

The midsole is removed, then the mold is cleaned and prepped for the next batch of production. The prepping process involves using ‘release agents,’ which is basically a chemical to stop the EVA from sticking to the metal surface. Yes, like how one uses spray oil to grease a frying pan.

What’s important to know is that when you hinge open the compression mold to remove the midsole, the finished midsole inside is of the same size as the mold. This sounds pretty obvious, duh, but the reason why we’re telling you this is because injection molding behaves in an entirely different way.

We wish we could show you some pictures of how the molds look; we have plenty of those. But all those photographs were intended for internal circulation only, so no can do. But we found this useful website which gives you a glimpse of what we’re talking about. We went through some of their content, and these guys know their onions.

Though the traditional way of compression molding – where you stick in a block of EVA foam and clamp the mold shut – is pretty straightforward, it also leads to wastage. After all, you’re cutting curvy blocks of EVA from a rectangular sheet, and that leads to cutting wastage.

Picture cutting gingerbread men from a square sheet of dough. You’ll have to leave margins of dough between the many Gingerbread men, and the same principle applies here. You’ll end up with a lot of EVA foam waste.

There is a way around this, and that’s a hybrid compression+injection procedure. Instead of the die-cut EVA block, you put an injection molded (read next section) EVA midsole block inside.

This block is called an injection ‘preform.’ This avoids the wastage associated with the old-school method, and the midsole blends in the properties of an injection and compression molded midsole.

We suspect that Hoka One One uses this technique in some of their shoes.

The injection molding process is more interesting to watch. A super-heated liquid mass of EVA (or equivalent) material and blowing agent(s) is injected into a mold which happens to be less than half the size of the actual midsole.

Like the compression mold, an injection mold also has these markings or etchings which transfer to the midsole design. 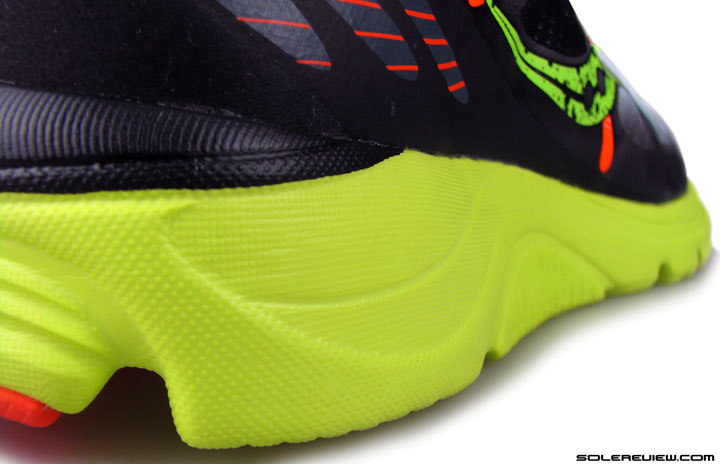 This is an example of an injection molded midsole – the Kinvara 6.

Leave it in there for some time, and when you open the mold, an EVA midsole literally jumps out of the mold. Remember, the mold is much smaller than the actual midsole volume, so the process of sudden expansion happens when the midsole is released from the mold. This is in contrast to the compression molded process, where nothing exciting happens after the molding process.

This is exactly like compressing a large block of foam (say 3x larger than your hand) with your hand, and then suddenly let go. No longer constrained to the confines of your hand, it expands to three times its compressed size.

After the midsole expands to a larger size, it also contracts or shrinks on cooling down (unlike the foam-in-hand example). So the process of managing the expansion-contraction is more complex than the simplicity of compression molding.

At the same time, injection molding leads to zero wastage as the midsole uses the exact amount of EVA required.

If injection molding is so awesome to watch and less wasteful, why do brands use compression molded parts at all?

Take a look at the Brooks Adrenaline GTS 16’s midsole; that nice looking texture is possible only by using CMEVA. 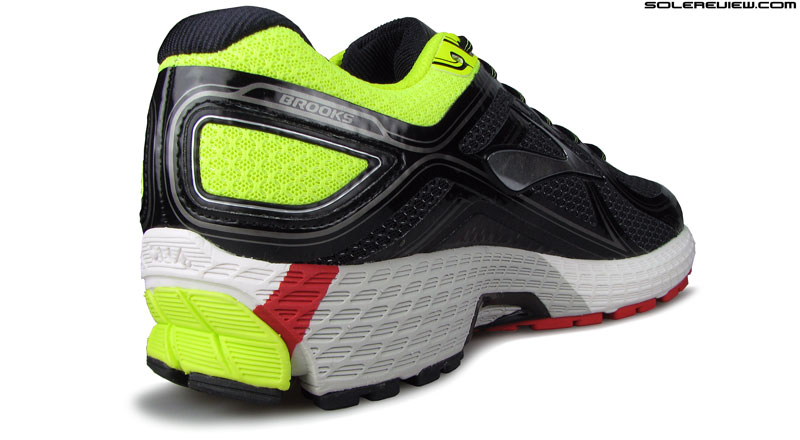 Secondly, compression molded parts hold their tolerances much better. With all the injection-expansion-contraction happening, injection molded midsoles can get a bit out of line when it comes to its exact (required) measurement.

So when brands have to combine multiple pieces together, then their choice of midsole will be a compression type. IMEVA soles are prone to variances, so fitting two or more parts might result in a fitting issue, leaving gaps where there should be none. Conversely, IMEVA tends to be used in a single piece midsole foam construction where complications are less likely to happen.

Lastly, it is easier to get extra firm midsole parts through the CMEVA process. Like that extra hard medial post, for instance.

Compression metal molds are also cheaper to make than injection ones, but we don’t see that as a primary factor when considering whether to go CMEVA or IMEVA.

Does a running shoe with an injection molded midsole ride differently than a compression molded one?

With adjustments in the formulation and process, it is possible to make both the injection and compression molded parts feel the same. That said, if we had to generalize, injection molded midsoles have a better bounce to them, and increased cushioning responsiveness. Softer IMEVA also tends to ‘crease’ quicker, and compression lines appear on the midsole sidewalls after some time of use.

Volume for volume, many injection molded midsoles tend to be marginally lighter than their compression molded versions. But like we said, all these statements are generalizations, and there will be exceptions.

Can one tell these two types of midsoles apart by just looking at the finished shoe? 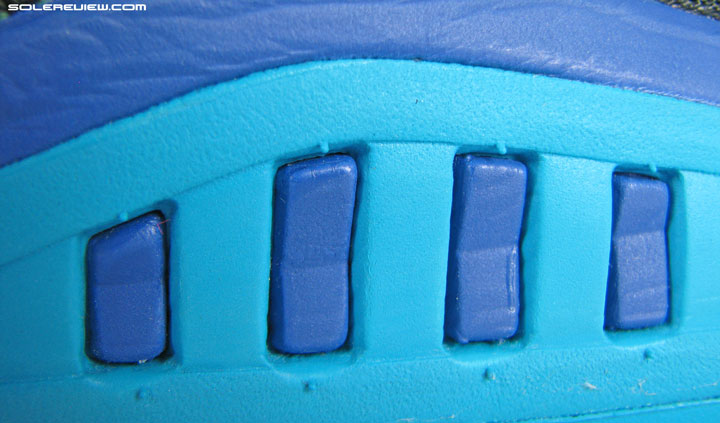 Look for the nipple – the compression midsole kind, we mean. 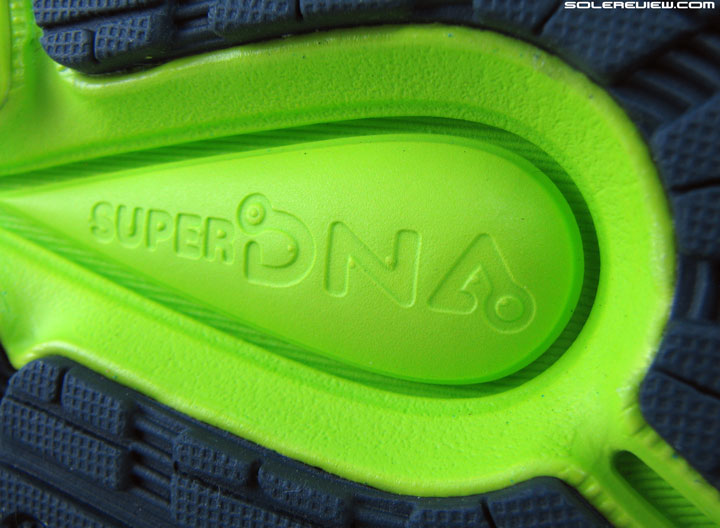 See those dots on the ‘D’ and ‘N’? Those are tell-tale signs of CMEVA.

That’s easy. Almost every compression molded midsole will have these ‘nipples’ on the surface. Here’re a few examples of how these look. (above)

Also, a compression molded midsole has a lot of detailing on its sidewalls. Like these clear, deep textures which might include visibly sharp text. 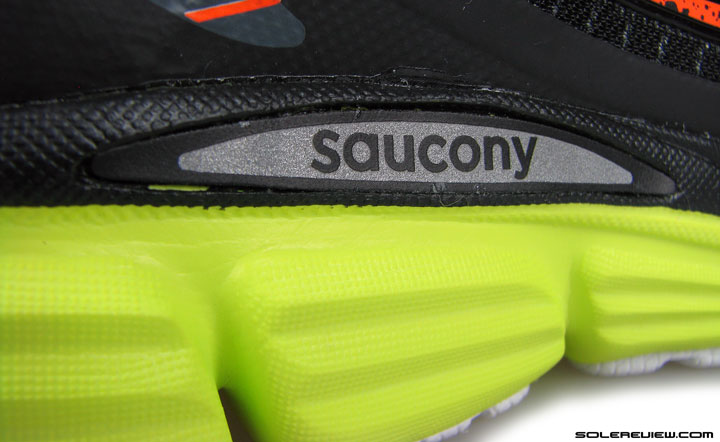 The Kinvara 6’s injection molded midsole is soft on the details – see the green part. A little shiny too.

Are there other ways through which running shoe midsoles are manufactured? 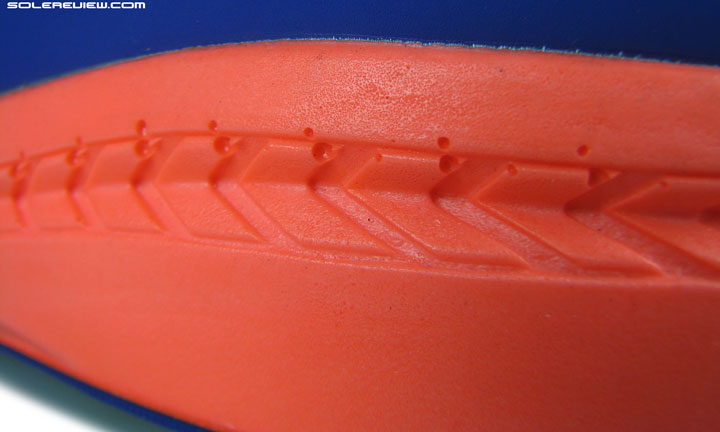 This is the Puma Ignite, and a good example of a poured Polyurethane construction. Those holes you see on the sides are trapped air bubbles formed during the pouring process.

A polyurethane running shoe midsole used to be common till early 2000’s, but not anymore. These midsoles are made by simply pouring molten polyurethane into a mold, and clamping the top shut. It is easy to distinguish a poured PU midsole; just look for those ‘pores’ on the surface, which are basically air bubbles formed during the pouring process.

The Puma Ignite has a polyurethane midsole, for example.

SLS (Selective Laser Sintering) 3D printing is another way of making running shoe midsoles, but in its current form, the process is not viable on a mass scale. Solereview has a detailed article on why 3D printed midsoles are (for now) a marketing gimmick.

And most of the make-at-home 3D printing hype you’ve heard or read about is around the FDM (Fused Deposition Modeling) 3D printing method, which cannot be used to make a running shoe midsole.

Well, at least not the one you can comfortably run in.

Very interesting article, thanks a lot :) Seems like my favorite shoes at the moment Saucony Nomad TR, Altra Olympus 2.0 and Skechers GoTrail Ultra 3 all have IMEVA – I didn´t see any nipples^^

Don’t know about the Nomad and Olympus, but the Skechers definitely uses IMEVA!

Hello, great article. Do you know how Mizuno midsoles are made?

My Mizuno Wave Ferus has a CMEVA – many nipples and fancy stuff.

Is it true that EVA needs time to recover after a run?
Like when you do your long run on sunday, the shoe should rest until wednesday?

Whoever wrote this article would make a great teacher.

Good article. Would be even greater if you added boost technology from Adidas for the production of midsoles from a foamed tpu beads!