The tear down: Asics Gel Nimbus 23 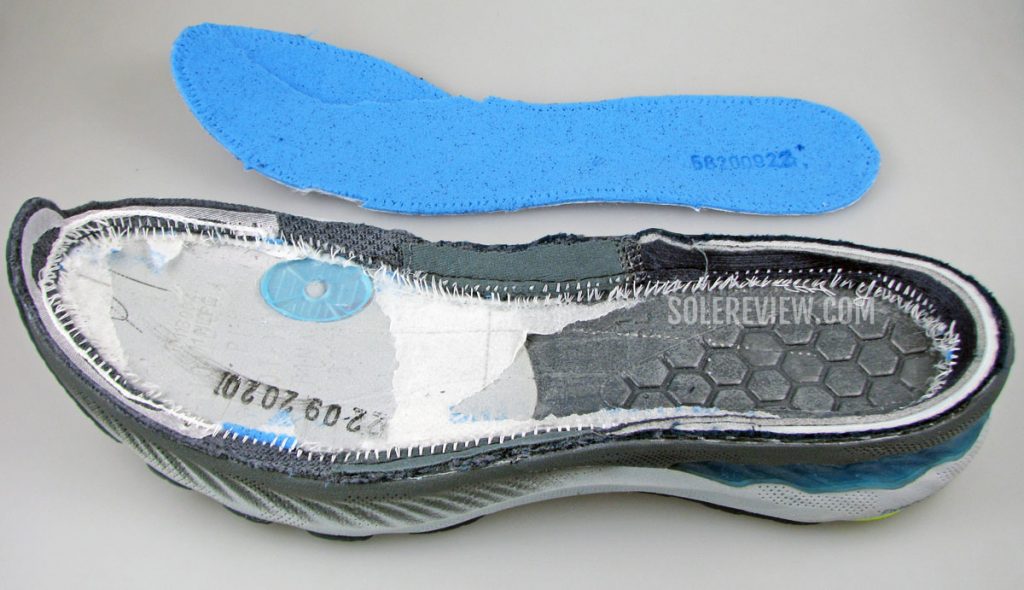 This is a new content category that focuses exclusively on tear-downs and dissections. For a detailed review of the shoe’s fit and ride character, please go here. This piece complements our in-depth reviews.

When we decided to spin off shoe tear-downs into separate articles, we chose an observational approach for our first tear-down subject.

As in, just focus on the construction without discussing the performance aspect. After all, why repeat ourselves when a full review of the shoe already exists?

While we’ll follow the said strategy most of the time, exceptions will apply. For example, the teardown of Asics ‘Gel’ Nimbus 23 is an opinion piece that critiques the much-touted Gel system.

The ‘Gel’ cushioning system and Asics running shoes have been inseparable for as long as we can remember.

Asics Gel began its life as pouches filled with semi-fluid Silicone that acted as a shock dispersion mechanism. Here’s a vintage advertisement for an Asics running shoe with forefoot and heel Gel units. 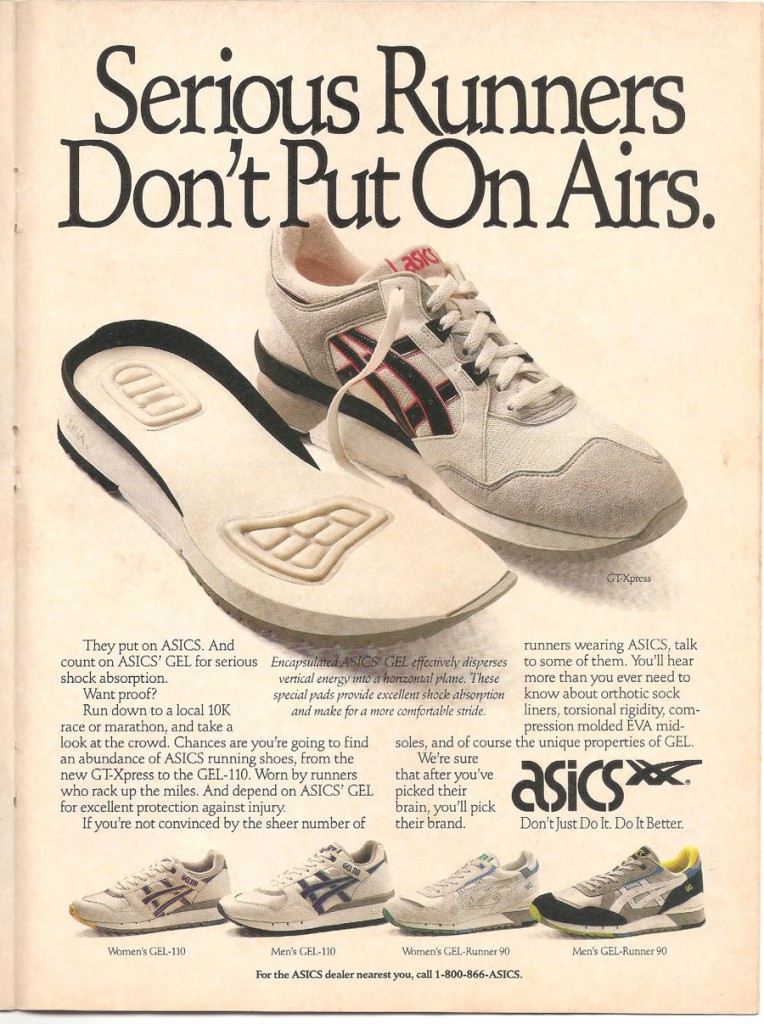 Back in the day, Asics Gel was a credible cushioning tech.

It was a response to Nike’s Air cushioning technology, and the early designs had a tangible cushioning effect and performed as advertised.

It’s also worth pointing out the vintage midsole materials were borderline hard. Notable examples would be Polyurethane foam and the die-cut, compression-molded EVA midsoles. So a softer density inserts like fluid-filled Gel pads enhanced ride softness and comfort.

Asics wasn’t alone in the Gel business; Brooks followed a similar trajectory with its ‘Hydroflow’ system.

However, sometime in the late 2000s, the Gel system took a turn for the worse. While the shoes became better looking due to the visible Gel pads in the forefoot and heel, the Gel pads ceased to have an impact on the cushioning delivery mechanism.

We took apart the Gel Nimbus apart in 2015, followed by the Gel-Quantum 360 a year later – a running shoe with visible Gel wrapped around its midsole. So what’s inside the Nimbus 23 isn’t new knowledge; at least not for us.

When viewed as a whole, the Nimbus 23 is an excellent running shoe that delivers the plush cushioning experience that it promises. The ride is soft, comfortable, and possesses adequate levels of stability.

But what’s the weightage of the Gel cushioning system in the overall ride experience?

There is no easy way to say this, but the present-day Asics ‘Gel cushioning technology’ is a scam.

In its current form, Gel is the most commercially successful lie in the athletic sportswear industry. Here’s Asics’s description of the Nimbus 23, quoted ad verbatim from its website:

“Delivers more compression in the heel thanks to its softer Gel technology cushioning unit.”

Both are straight-up lies. So what exactly makes the Asics Gel a fine specimen of marketing BS? A cross-sectional examination of the midsole uncovers many untruths. 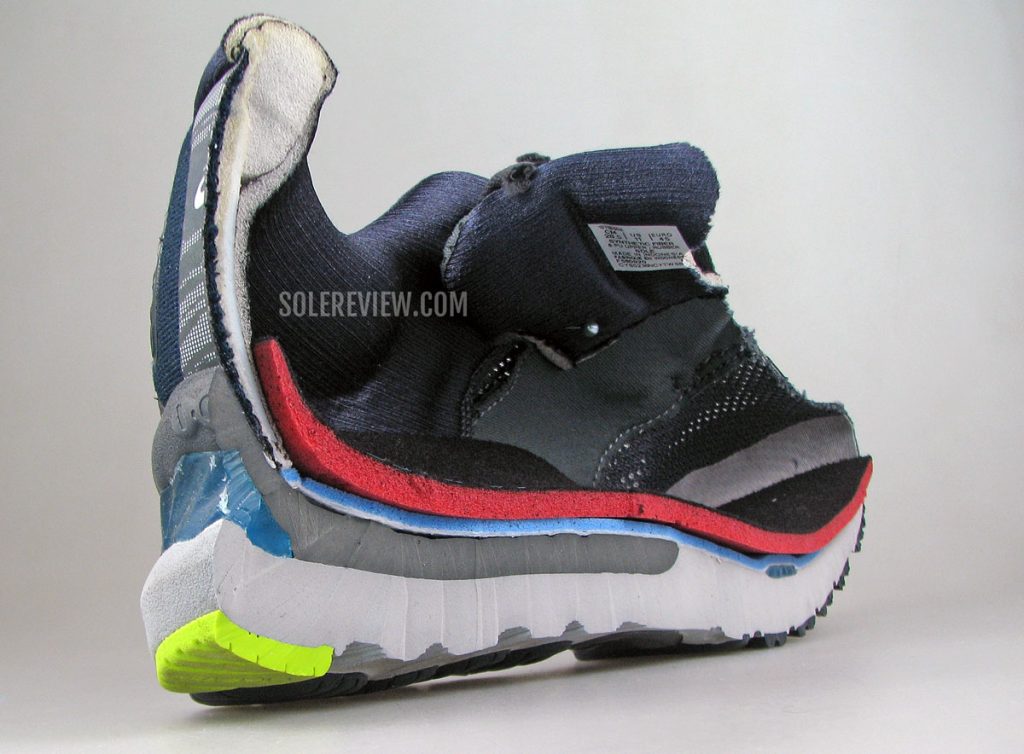 Not what you were expecting, huh?

When stripped apart, here’s what the Nimbus 23’s midsole looks like.

For all practical purposes, nearly 100% of the cushioning is delivered by the dual-density foam stack (that includes the lasting and insole) and very little by the Gel pads.

The rearfoot midsole has no effective Gel cushioning. It’s all foam. 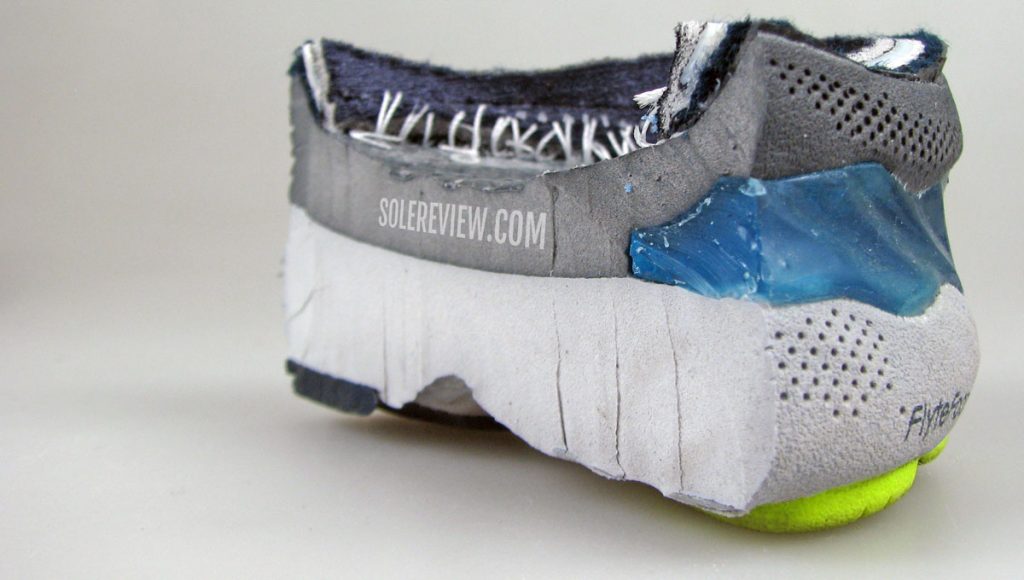 The visible Gel windows are confined to the exterior and do not extend inwards. 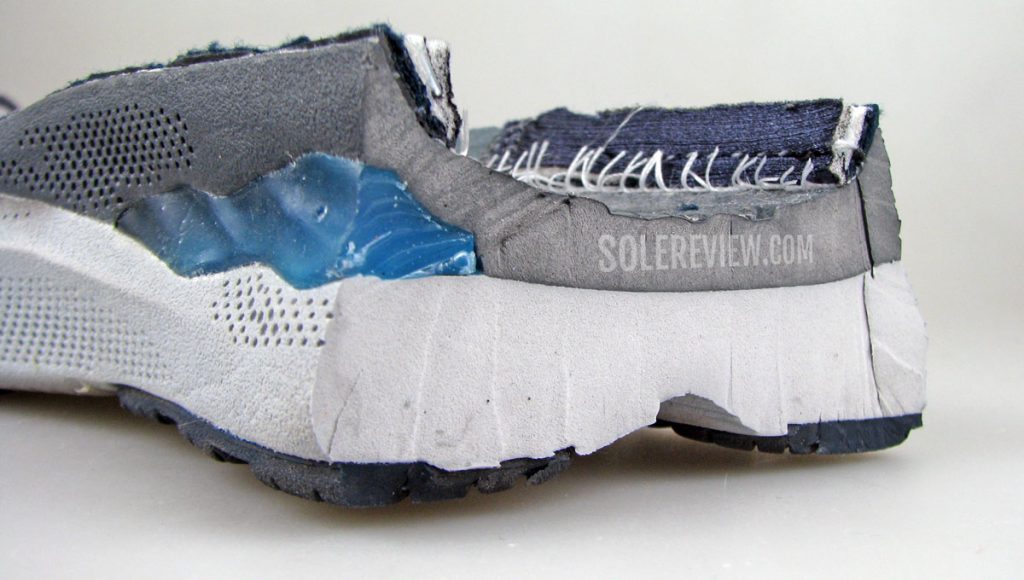 The visible Gel doesn’t do much. 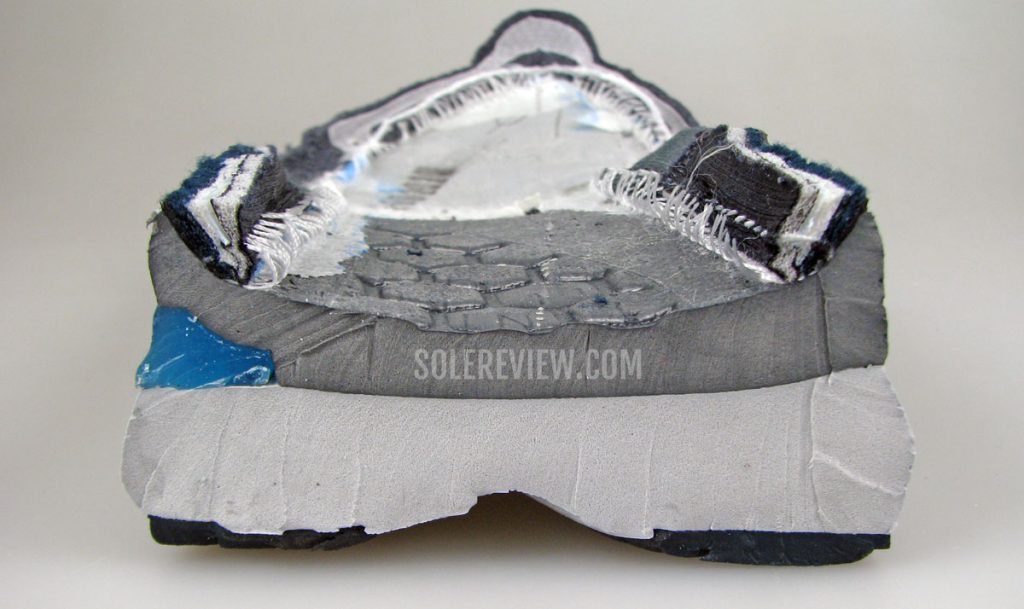 The midsole, when seen from from the heel to forefoot.

That’s particularly true of the rearfoot. At least some of the older Asics models had a coin-sized Gel pad under the heel. Here, the heel stack is all foam. The large Gel unit that’s visible on the outside doesn’t extend under the heel. It’s merely a superficial decoration, that’s all.

The only role the rearfoot Gel has within the ride dynamics is to create a lateral bias. Asics shoes with a visible Gel unit on the outside tend to compress slightly more than the inner foam-filled sidewall, so runners get that slight outwards bias. 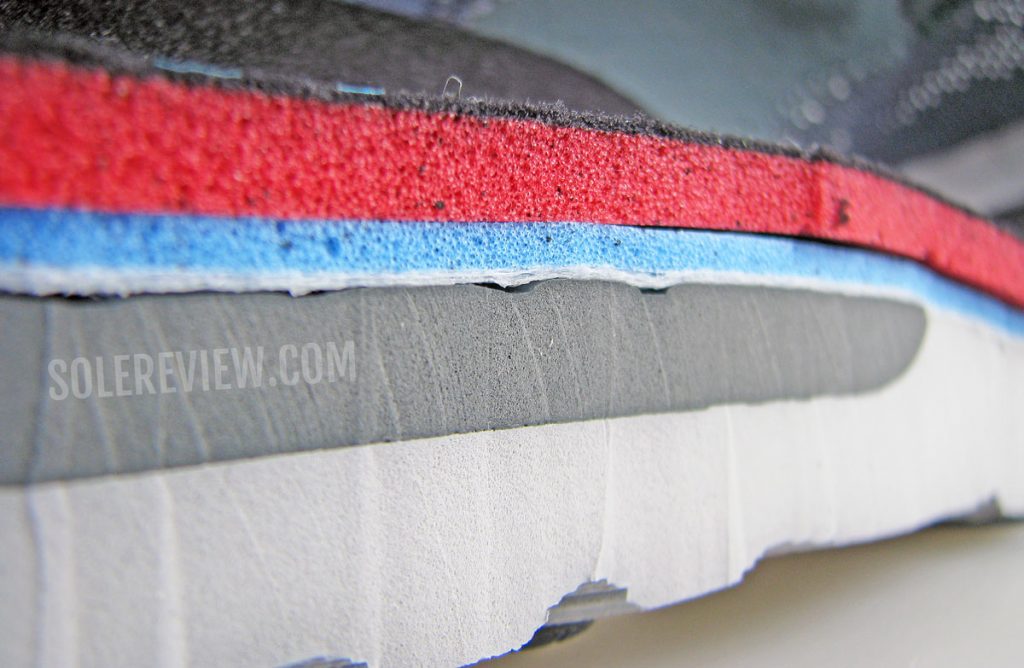 But as far as the heel cushioning softness is concerned, 100% of that is delivered by the multi-density foam. The Gel coverage is absent in the foot-strike or transition zone, so it plays no part in the ride softness.

The forefoot has a Gel unit that’s very similar to the one we excavated in our 2015 dissection. And it’s tiny – and just how small? Here’re some close-up pictures. 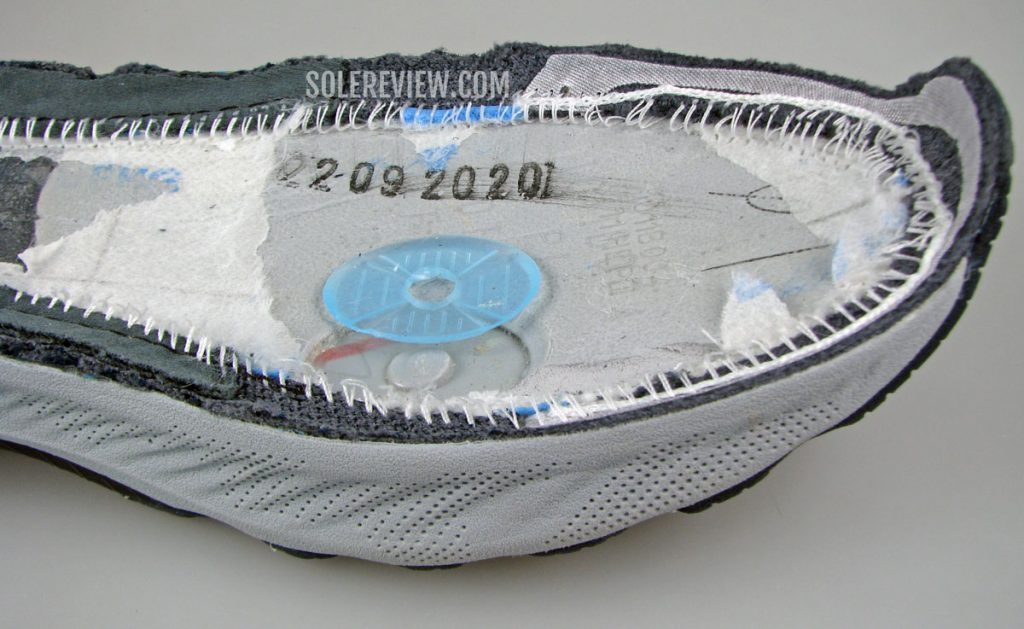 Things haven’t changed in the last decade. The forefoot Gel is next to nothing. 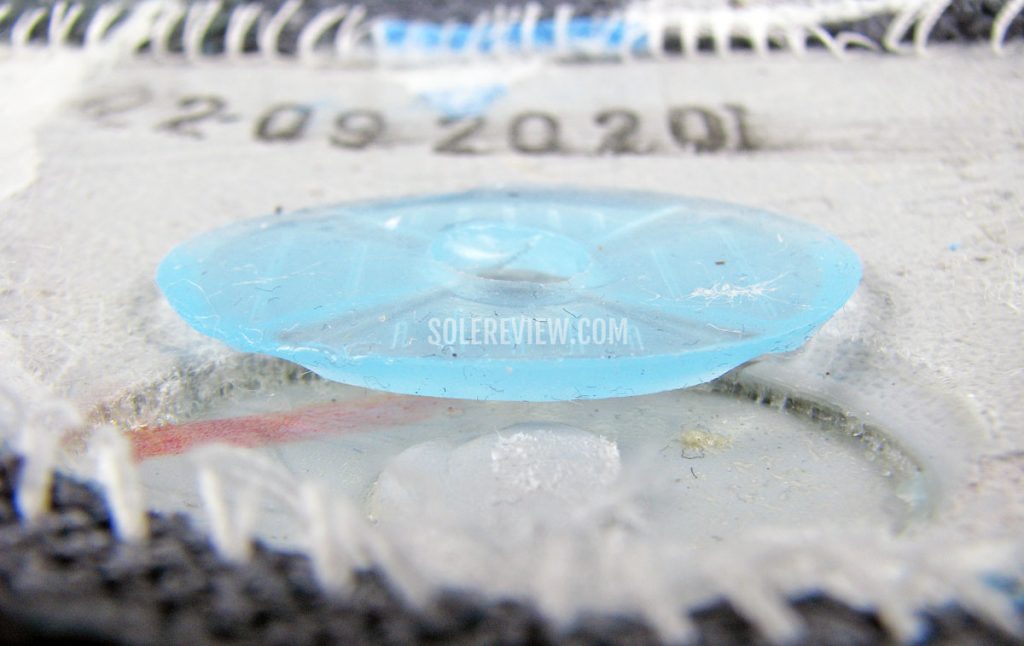 It’s not thick either. 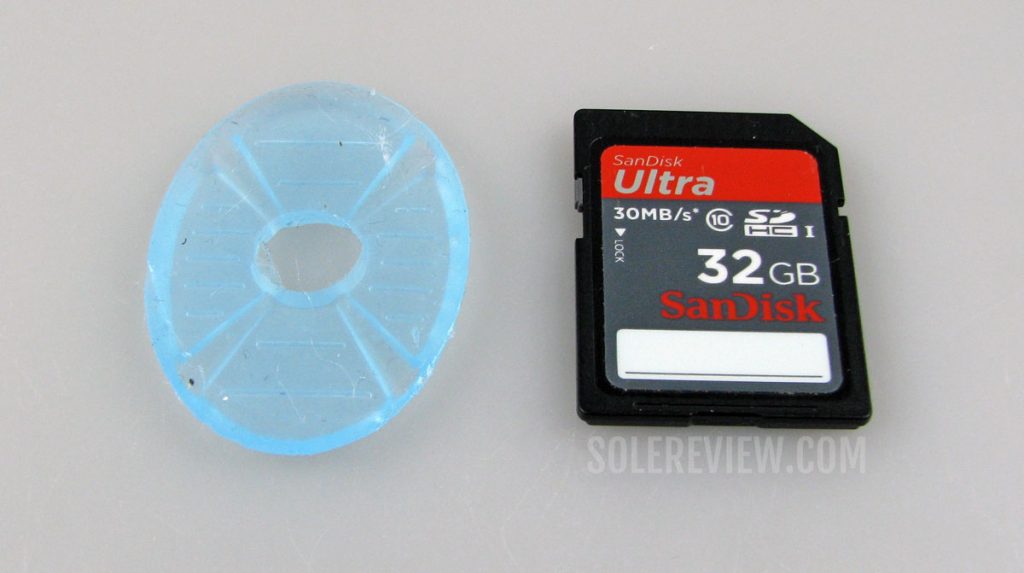 That’s how small the forefoot Gel is. This is only Gel that’s part of the actual midsole.

The third picture provides a good perspective. The forefoot pad is slightly larger and thicker than the SD card that we used to photograph these images.

It is placed just under the ball of the foot, and comprises approximately 10% of the total midsole stack. It’s a part of the midsole during the transition (push-off phase), but does not affect the cushioning behavior during the forefoot landings. 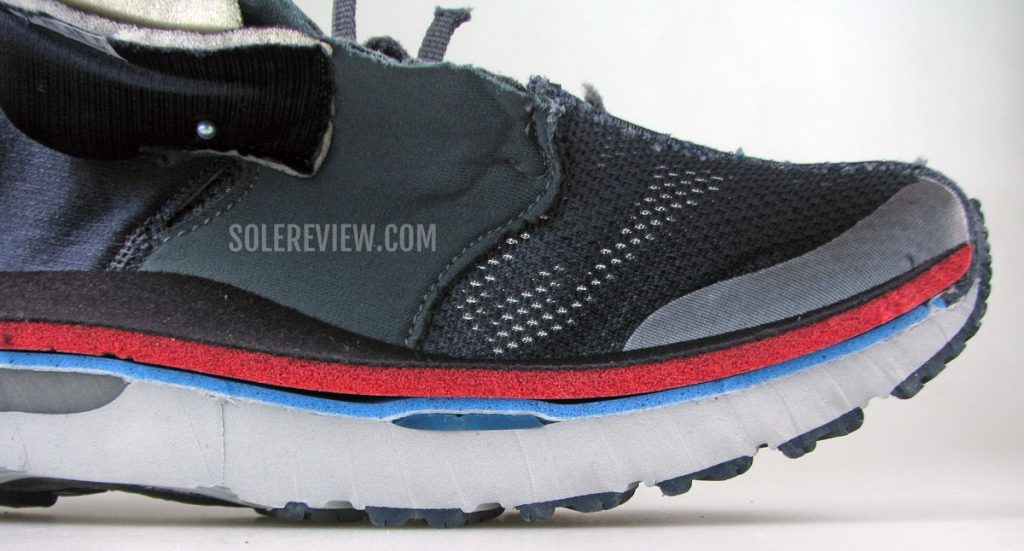 Yup. That tiny Gel lump is all there is.

The dissection also shows that the Gel isn’t flush with the blue lasting. Rather, it forms a slight lump.

This is lazy designing; even if the Gel is near-useless, it should be flush with the other layers. Nike does this very well with its Zoom Air bags, and so did Brooks during its DNA Gel days.

Speaking of Brooks DNA Gel, this is how an Asics Gel shoe should ideally look like on the inside. Presenting from our archives – a vintage Brooks Glycerin and Ghost 4.

This is how a full length Brooks DNA Gel layout looks like. From the 2011 Glycerin 9. 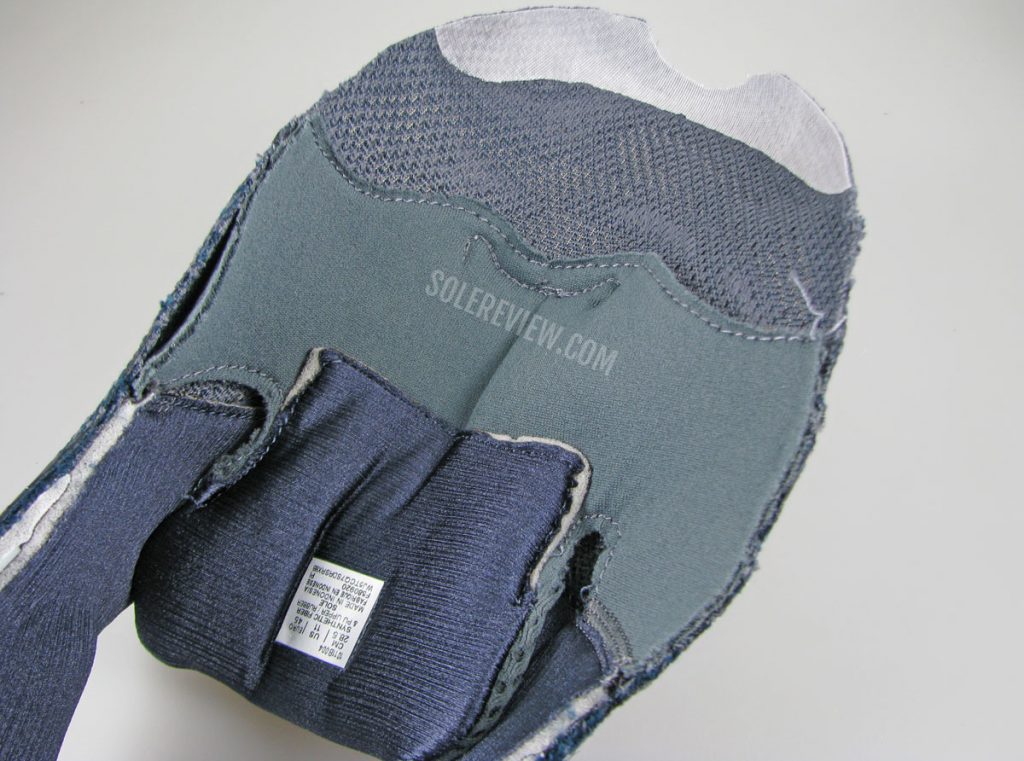 The upper is soft and plush. Note that the inner sleeve spans across the entire midfoot; the tongue flap is attached to it.

The upper is excellent – something that we’ve taken pains to highlight in our review.

Asics uses premium materials throughout the upper, be it the soft tongue, collar lining, or the soft exterior. An additional layer of fabric is fused to the toe area for shape retention while creating a wide toe-box.

All these years, the Nimbus was missing an inner sleeve holding the tongue in place. Not this time; the 23 uses a thoughtfully designed sleeve that isn’t attached to the tongue, but it’s the other way around.

The single-piece spacer mesh is soft with a thin foam layer sandwiched within. The tongue flap is integrated into the sleeve, so the result is a comfortable and plush midfoot fit. 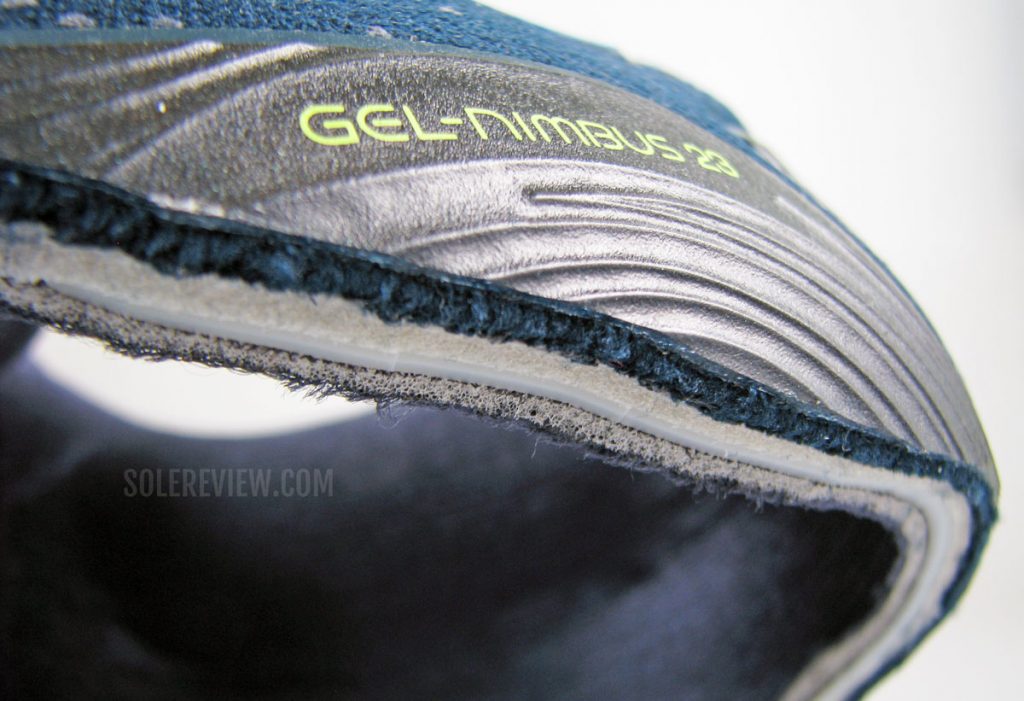 The heel counter (white plastic sheet) is sandwiched between the mesh layers to make the heel supportive and grippy.

Asics doesn’t skimp on the upper in the back. The heel is reinforced with an internal counter that provides functional value (in the form of grip) as well as durability.

The Gel cushioning system advertised on the Nimbus 23 provides no performance benefits whatsoever and has no effect on the ride quality.

Thus, your purchase decision should not be influenced by whether an Asics shoe has Gel in it – or not. They’re all the same, so you’ll be wasting your money if you pay a premium for Gel tech.

The tear-down: The Nike Vomero 15