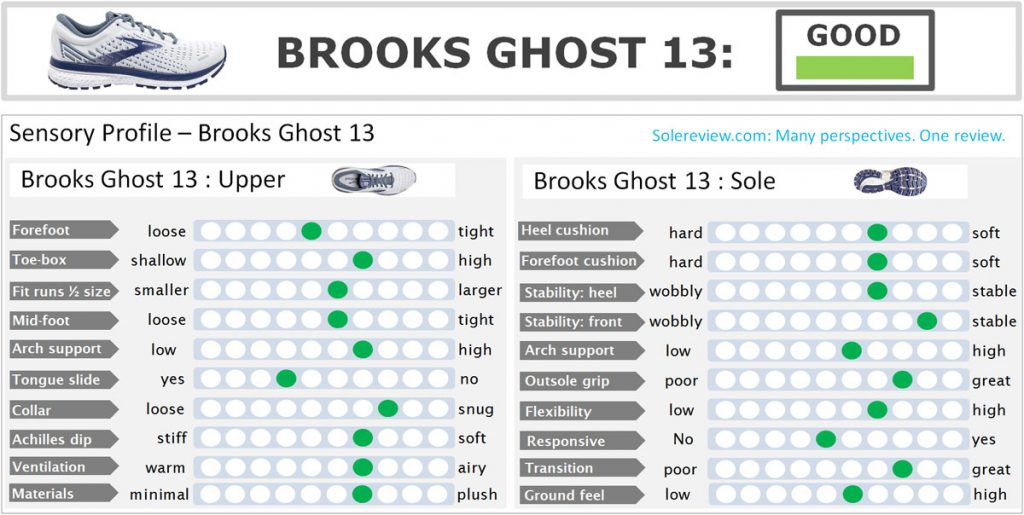 Brooks’s marketing pitch: For an easy transition from landing to toe-off.

The Ghost has proved to be a reliable workhorse since its inception, and the 13 follows the time-honoured tradition. What’s new, you ask? It’d be the smoother ride and slide-prone tongue.
Cushioned and smooth ride, supportive, widths
Slightly heavy, tongue slide 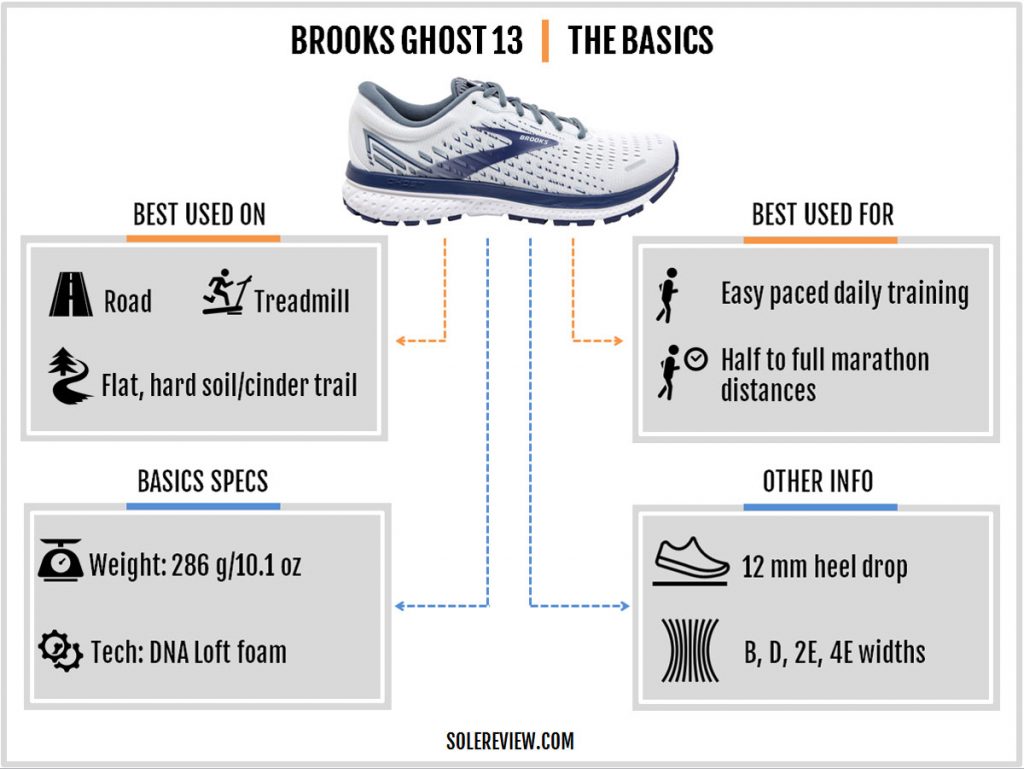 It’s incredibly hard to go wrong with the Brooks Ghost.

Sure, one may prefer a running shoe with a lower heel-to-toe offset, rather than the 12 mm gradient of yours truly.

Also, the 10-ounce weight is nowhere as lightweight as contemporary trainers that hover in the 7~9-ounce range. Under the foot, the EVA-blend midsole feels ordinary in comparison to modern super-foams.

But none of these factors are absolute deal-breakers, are they?

Dispense with the trivialities, and it’s easy to appreciate the Brooks Ghost’s innate talents.

Its 12 mm offset is less intimidating than the low-profile, 4 mm offset trainers that often stress the Achilles of first-time runners. The EVA midsole isn’t super bouncy, yet the cushioning is predictable, reliable, smooth, and most importantly, supportive.

The 10-ounce build also includes a full rubber outsole, a removable insole, and a plush upper. If you ask us, it’s good a trade-off as any.

This tried-and-tested formula has successfully guided the Brooks Ghost through the years, and not much has changed for the present-day version. The redesigned midsole may no longer have a separate crash pad, yet the Ghost 13 stays true to its ideal.

In other words, it’s a comfortable neutral trainer that’s a safe pick as a first running shoe. Or as a lazy, no-brainer choice for runners with multiple shoes in their rotation.

The Ghost 13 goes through the same changes as the recently-reviewed Adrenaline GTS 21. The midsole abandons the dual-density set-up by ditching the separate heel crash pad.

This time, the entire midsole is a single piece and made of an EVA foam-blend named as DNA Loft. It’s worth mentioning that full-length DNA Loft was previously limited to the more expensive Glycerin, so this counts as an upgrade of sorts. 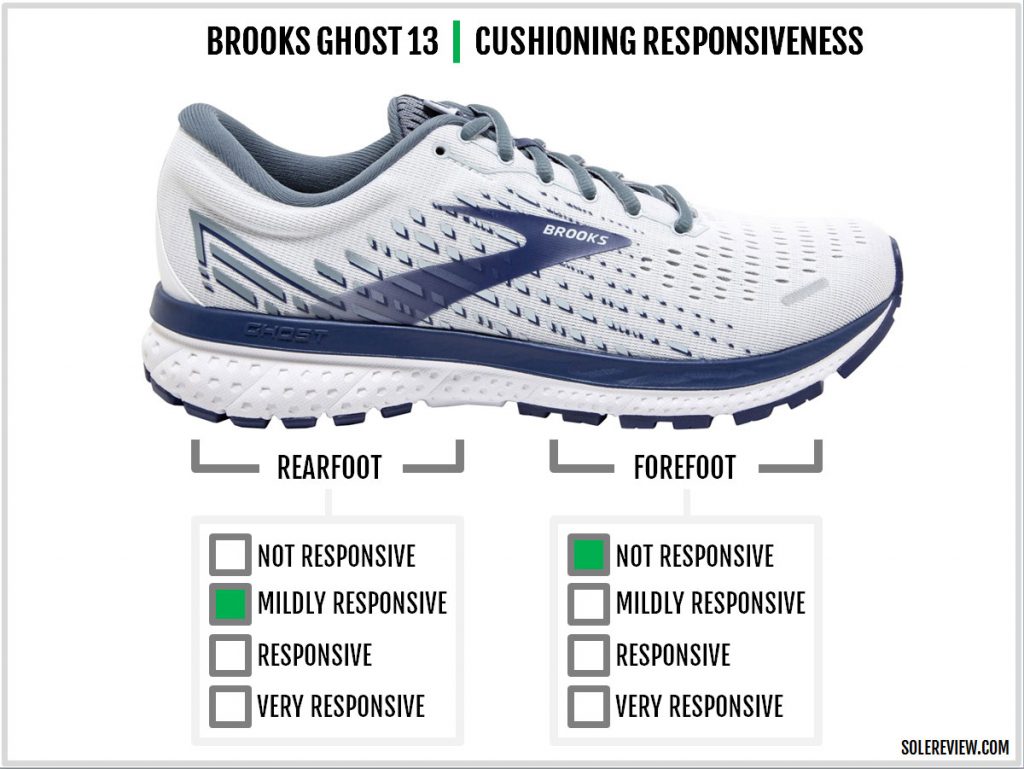 It’s an upgrade, but not in the traditional sense. A conventional upgrade would mean that the ride is more responsive, lighter, softer, or a combination thereof.

That doesn’t apply here. Much like the versions before it, the Brooks Ghost 13 is a mild-mannered neutral trainer that has scant regard for modern trends.

The 1.2 cm heel-to-toe offset should be hint enough. The sloped midsole concentrates most of the cushioning into the back, ever ready to welcome rearfoot strikers. The 10-ounce weight suggests that the Ghost 13 is a solidly-built shoe, and it is.

A hardy carbon rubber outsole protects the rear, whereas a softer compound pads the front. This template hasn’t changed for the last several years, and Brooks saw no reason to fix what wasn’t broken.

There are minor tweaks like the heel and midfoot outsole getting these micro-openings that make the loading process smoother, but only just.

The quality of traction has never been an issue on Brooks running shoes, and it’s no different this time either. 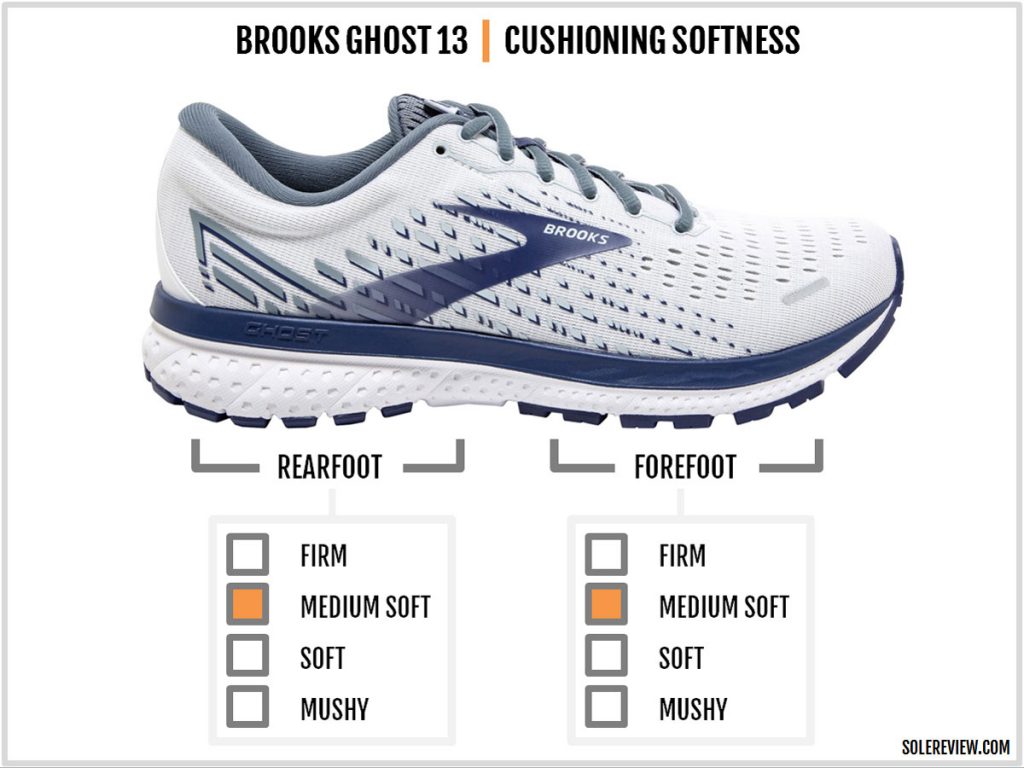 While the Ghost, along with familiar faces of the Brooks family, has turned softer over the last couple of years, it doesn’t overdo it.

As always, the removable insole and the foam lasting provide the expected layer of top-biased softness. The DNA loft is medium soft and not mushy at all – a balance that makes the ride supportive and neutral.

Responsiveness isn’t what the ride is about. It lacks the springy feel that we’ve come to expect out of new-gen foams. At best, the midsole has a padded quality that muffles the imperfections on the road.

Even ‘neutral’ shoes have an outwardly-biased midsole design, and so does the Ghost 13. The inner side is molded more solidly as opposed to the grooved outer side.

Despite this variance, the ride is supportive and neutral. The switch to a single-density construction also means that the transitions are smoother from heel to toe.

The Brooks Ghost 12 had a firmer crash pad molded to the softer base, and while it wasn’t noticeable back then, its absence makes it conspicuous.

Ironically, the Ghost 12’s separate – and firmer – crash pad added more support, not less. Nonetheless, the difference is negligible and of little concern. There is a transition/centering groove under the heel, so that too, helps with the stability and transitional process.

So if everything old is new again, is there anything novel to say about the ride quality and general use-case(s) of the Ghost 13?

Not really, for the Brooks Ghost 13 is the running shoe equivalent of a Toyota Corolla. There are new models each year, but the premise remains unchanged. It’s not going to get you anywhere in a hurry, it’s not the best car for long-distance travel, nor is its suspension tuned for carving fast corners.

And if we were to draw upon an apparel analogy, the Ghost is like a pair of dark denim in a slim cut. It’s easy to pull it off with dress shirts and sports jackets, or just a polo tee. It’s not formal-wear nor extremely casual, but somewhere in the middle.

Like the popular Japanese car and blue jeans, the Ghost’s appeal lies in its wholesome, do-everything wearability. It’s an easy pick for daily runs or the occasional long-distance stretch. The Ghost 13 is marathon capable, but that’s clearly not its forte. 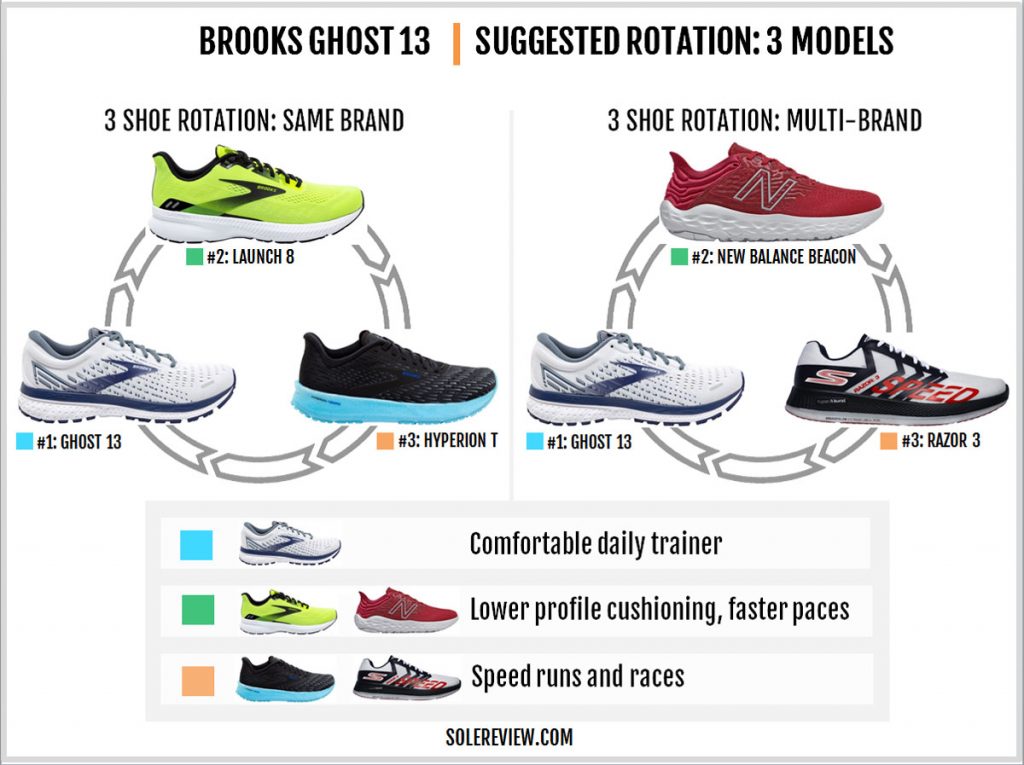 So it makes sense to have the Ghost as a ‘dumb pick’ within a multiple shoe rotation – one that includes the Brooks Hyperion and the Launch. That said, we think all three are unnecessary; just the Hyperion and Ghost will suffice.

The Hyperion is lightweight, efficient, and cushioned – all hallmarks of a running shoe that can go the distance without compromising ride comfort. The Launch 8 is noticeably softer than the 7, but its lighter and lower-profile build makes it a good companion shoe.

Instead of the Launch, even the New Balance Beacon 3 works as a cushioned yet agile option.

IS THE BROOKS GHOST 13 DURABLE? 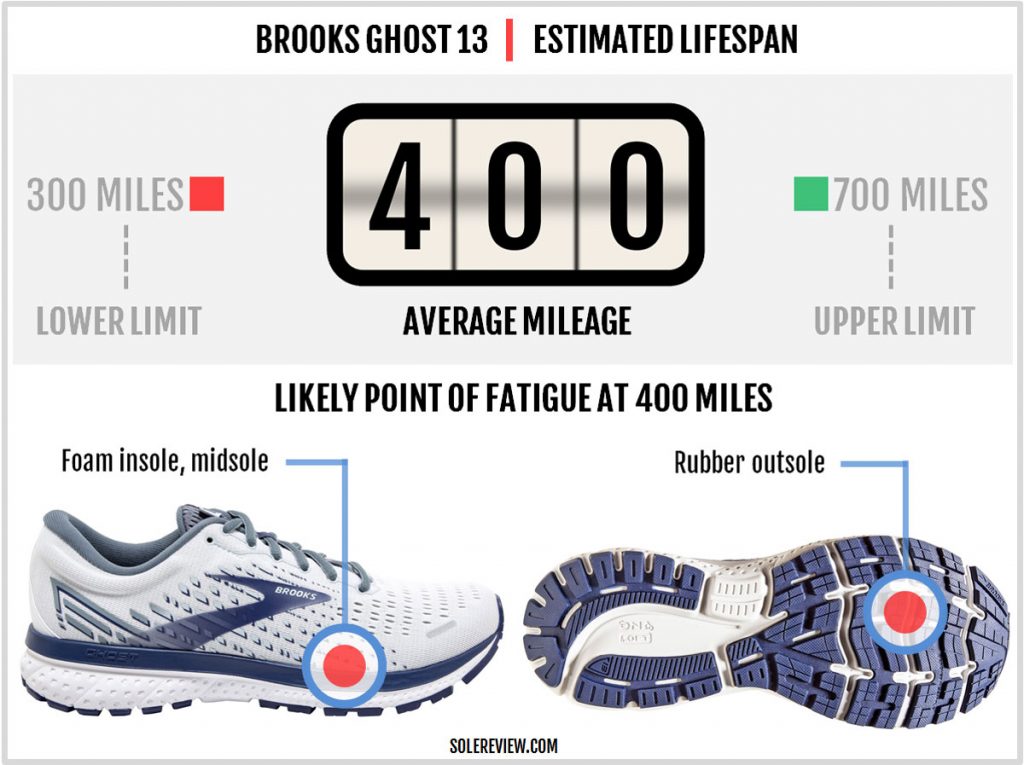 Except for the eventual wear and tear that is the part of any running shoe ownership, nothing on the Ghost 13 suggests a low lifespan.

The Brooks Ghost’s 10-ounce weight makes it as solid as they come. One may encounter the stray case of mesh tears and such, but that’ll be the exception and not the norm. 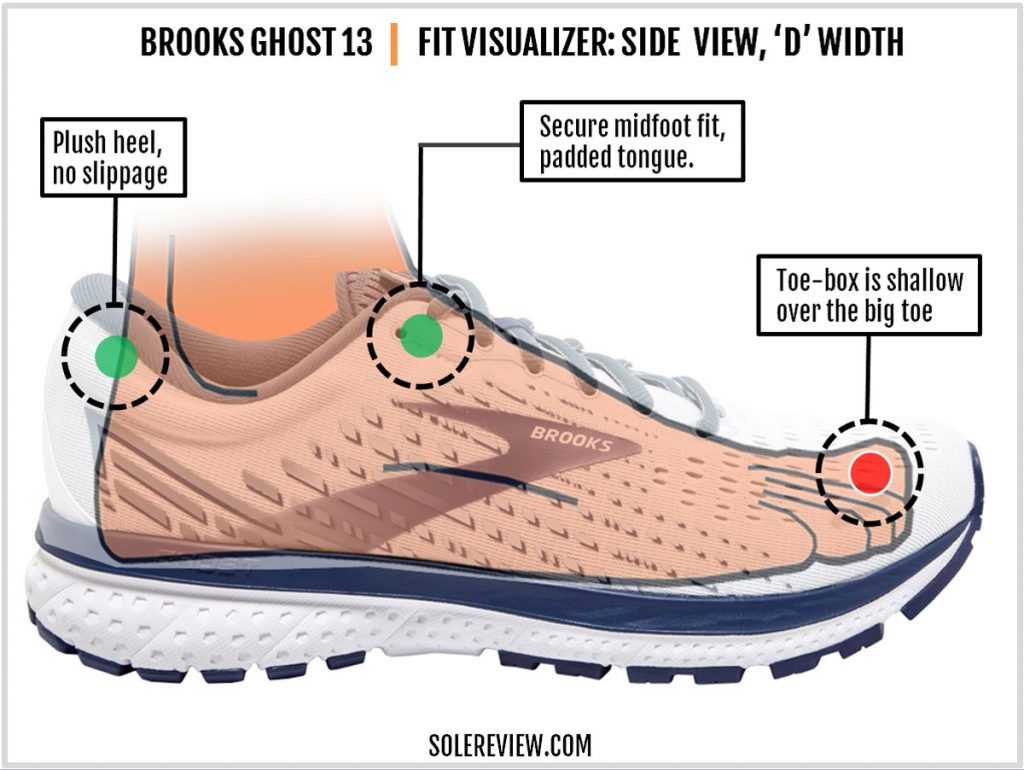 The general (online) consensus about the Brooks Ghost 13 points at a true-to-size fit with little to no changes over the Ghost 12. That is mostly true, except for a couple of things.

Yes, the Brooks Ghost 13 will run true to size for most runners. However, when compared to the 12, the forefoot and toe-box get a few updates. 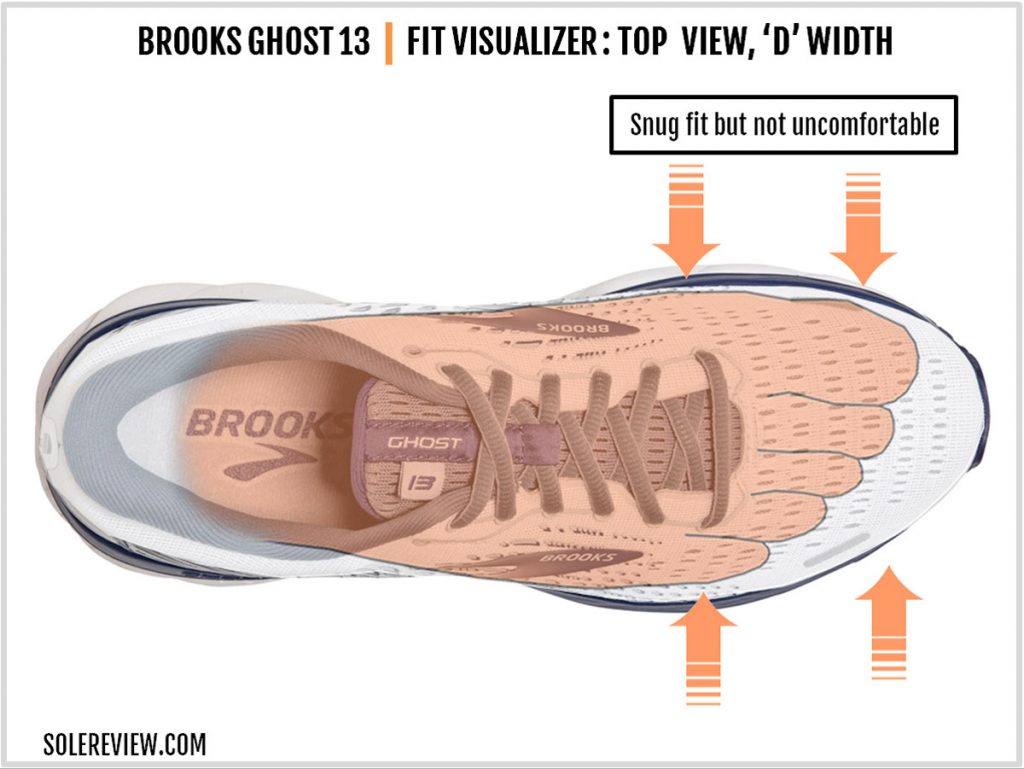 Interestingly, this update mirrors the Adrenaline GTS 21, and the reasons are similar too. The Ghost 13 appears to have a longer internal toe-bumper than lends the forefoot a better-defined shape.

The mesh design also differs; the Ghost 13’s upper has fewer vents on its engineered mesh surface on both the medial and lateral sides. Under normal circumstances, the internal bumper and decreased mechanical stretch should make the fit narrower.

However, the decreased heel padding and the softer upper mesh cancels the space-eating effects of the pointer forefoot.

Thankfully, there are multiple widths available with the Ghost. When in doubt, the wider 2E (or 4E) will address any paucity of interior space.

Else, the Ghost 13’s upper checks most boxes. It’s secure, comfortable, and smooth on the inside. Reflective bits are placed over the forefoot and heel, as they did on the previous model. Though the 13 is visually austere with fewer cosmetic details, it’s smooth on the inside.

The laces are round and soft, and the padded tongue filters the lacing pressure well.

A major change has been made to the tongue flap design, and that results in (more) slide. The flap isn’t as broad as the G-12 and has a pointier end that rides over the instep.

There’s a noticeable increase in the sideways slide, and that’s not because of the flap shape. Remember the ‘tongue tied’ loop that most Brooks shoes had in the past, including the 12?

Well, the Ghost 13 no longer has it. It’s a shame, because that additional loop on the side compensated for the absence of a sleeve or gusset. So Brooks should either a) introduce a gusset, or b) reinstate the loop, or c) make the flap very wide, Mizuno style. Also, it’s a bit puzzling why the Adrenaline GTS 21 has a gusset and the Ghost doesn’t.

The Brooks Hyperion doesn’t have a) or b), but has a wide flap that minimizes slide, so it’s relatively easy to roll that out across other models.

Note: The standard model isn’t water-resistant, but a waterproof (and more expensive) Gore-Tex variant is an optional purchase. 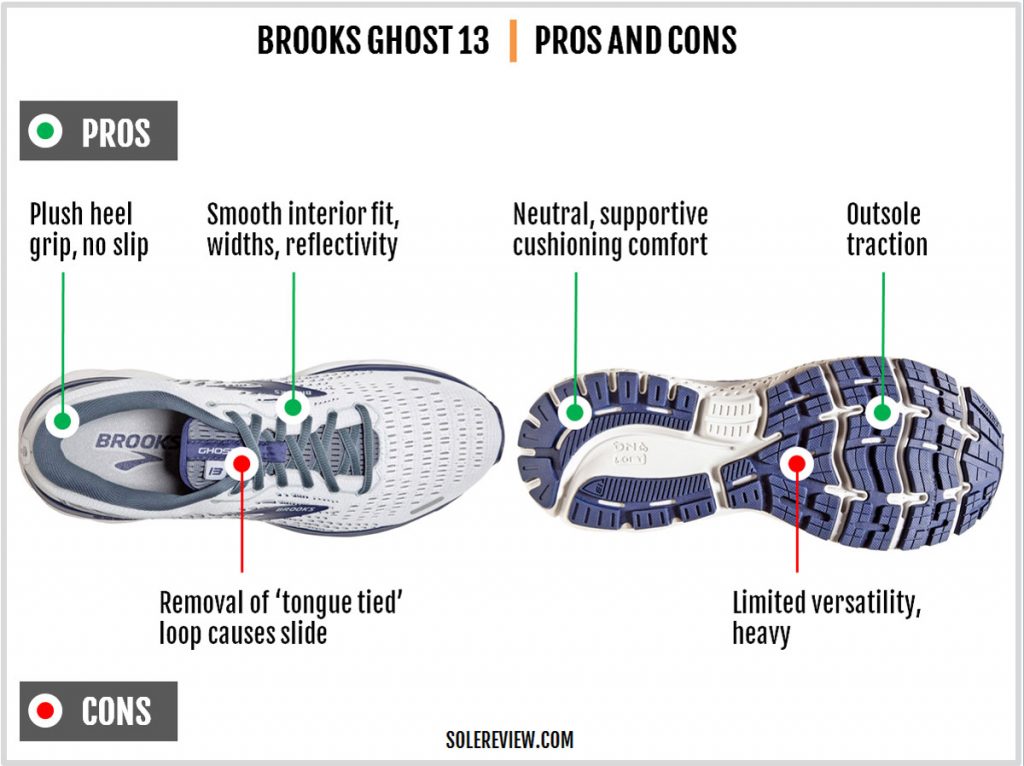 With its just-right softness packaged in a smooth and neutral ride, this shoe has a please-all character.

Some runners may find the EVA-blend midsole to be bland and the 10-ounce weight to be heavy, but hey, that’s the Ghost for you – nothing special, just a comfortable daily trainer. The tongue slide is unfortunate, since that’s the result of editing an useful feature.

All being said, we’d pick the equally competent Ghost 12 due to its more comfortable heel padding and lack of tongue slide.

Similar to the changes that have taken place on the Adrenaline GTS 21, the midsole becomes single-density minus the crash pad. This makes the ride smoother in the rear.

The outsole layout is similar, but not identical. The lugs have windows exposing the foam under the heel and midfoot, and allows the outsole to flex better with the midsole during the landings and transitions. 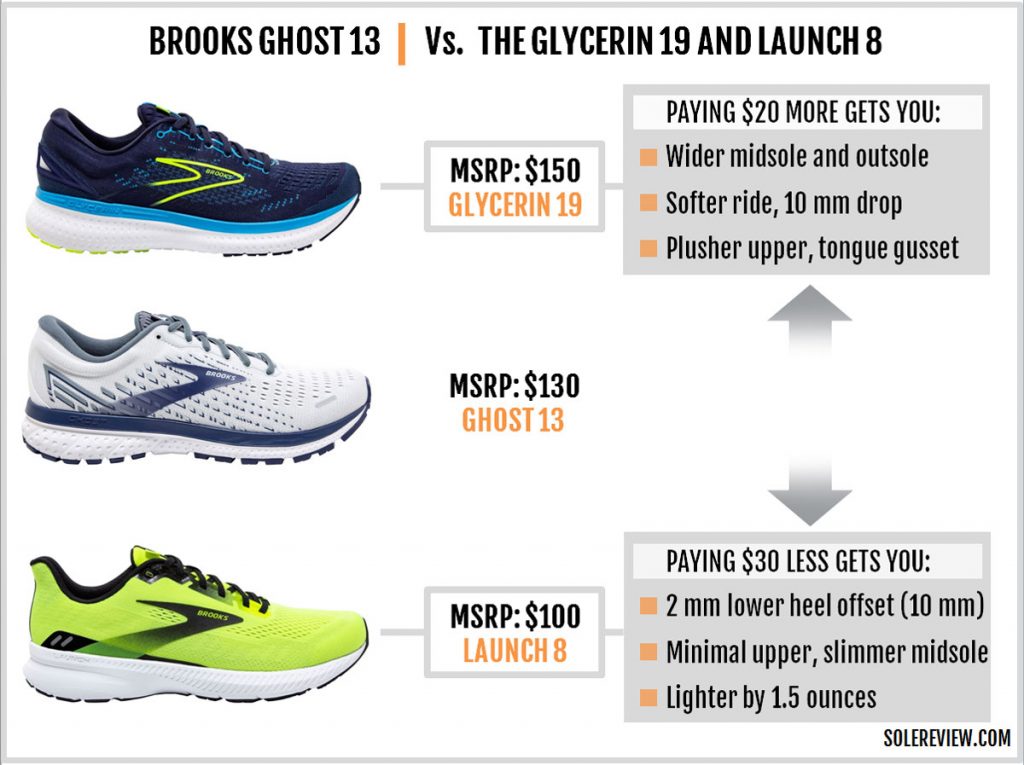 The Launch 8 is much softer than 7, so it’s akin to a stripped-down Ghost. The midsole is lower profile, and the upper is lighter – both of which lead to a 1.6-ounce lighter build than the G-13. The $30 less expensive Launch is a better fit for faster workouts while providing the necessary ride comfort.

The Glycerin 19, on the other hand, is a more supportive, cushioned, and plusher version of the Ghost. There’s more foam packed within the higher volume – and wider – midsole for a higher level of ride comfort.

Also, niceties such as a more premium-feeling upper with a tongue gusset are welcome. Naturally, there’s a price up-charge for the Glycerin’s extra bits.

SHOES SIMILAR TO THE BROOKS GHOST 13 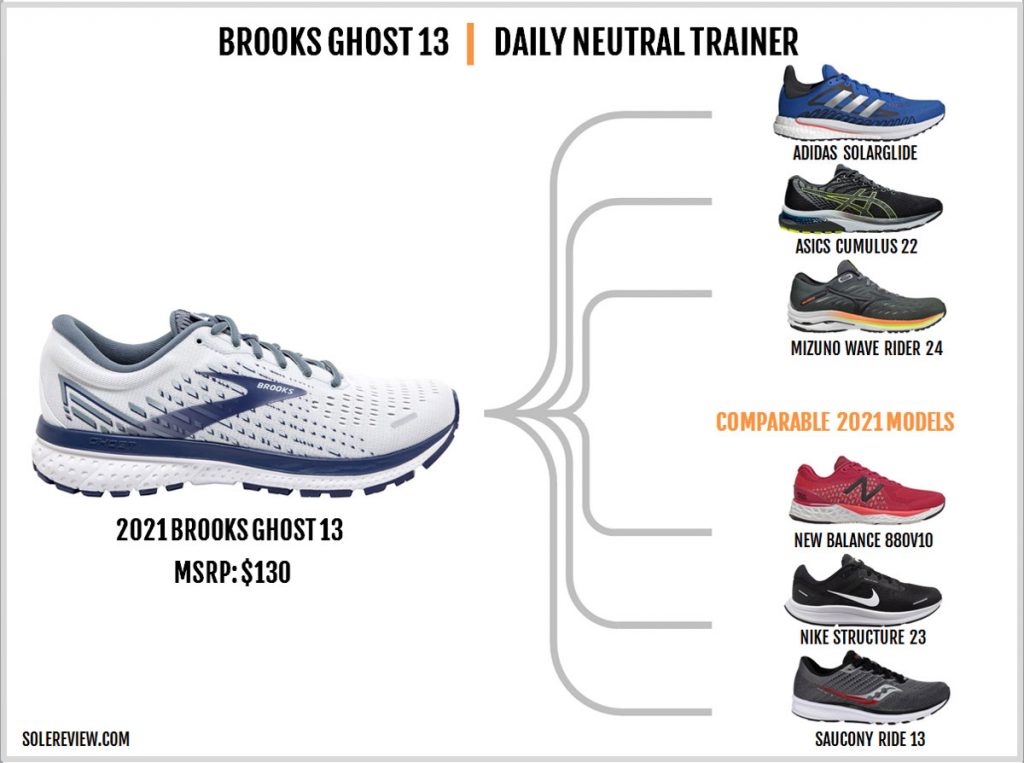 The Adrenaline GTS 21 is nearly identical – except for the raised ‘guiderails’ that result in a higher level of under-arch support.

Of all the non-Brooks shoes here, the New Balance 880V10 is the closest match. It’s got a relatively high offset of 10 mm, and the cushioning is delivered through an EVA-blend midsole – just like the Ghost.

Though the Nike Structure 23 is firmer than the Ghost, it’s a closer match than the Pegasus 37. The Structure isn’t what it used to be; the ride is much softer and neutral. A medial post is no longer involved.

The Asics Cumulus 22 is a comfort version of the G-13 due to its softer ride. And for even more softness, it’s worth trying the adidas SolarGlide.

It’s hard to fit the Mizuno Rider 24 into a stereotype, given how its plastic ‘Wave’ plate results in a unique ride signature. That being said, it is a capable and versatile daily trainer that performs under a variety of circumstances.

Lastly, the Saucony Ride 13 differs from the rest with its firm ride that also gives it superior versatility. Though the ride isn’t as cushy as the Ghost, runners will be able to extract a wider performance range.