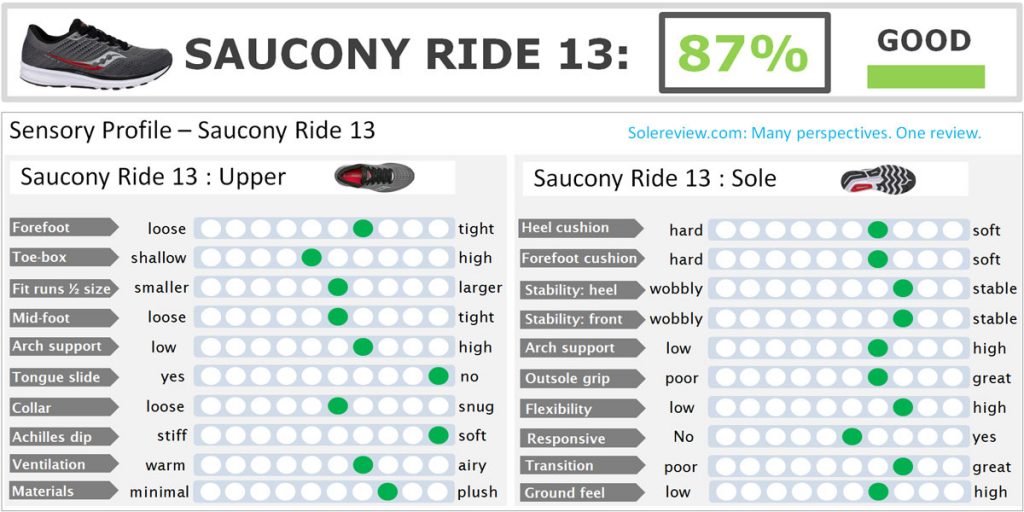 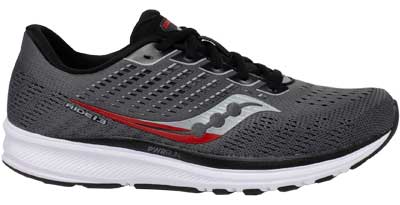 Buy from Zappos.com
.Check price on Amazon
The Saucony Ride is back for another year, this time without the ISOFIT strap upper. And it's the excellent neutral daily trainer we've always found the Ride to be.
Supportive and versatile ride, smooth transitions, breathable, widths, upper fit
The Ride weighs nearly 10-ounces. That makes it - heavy? 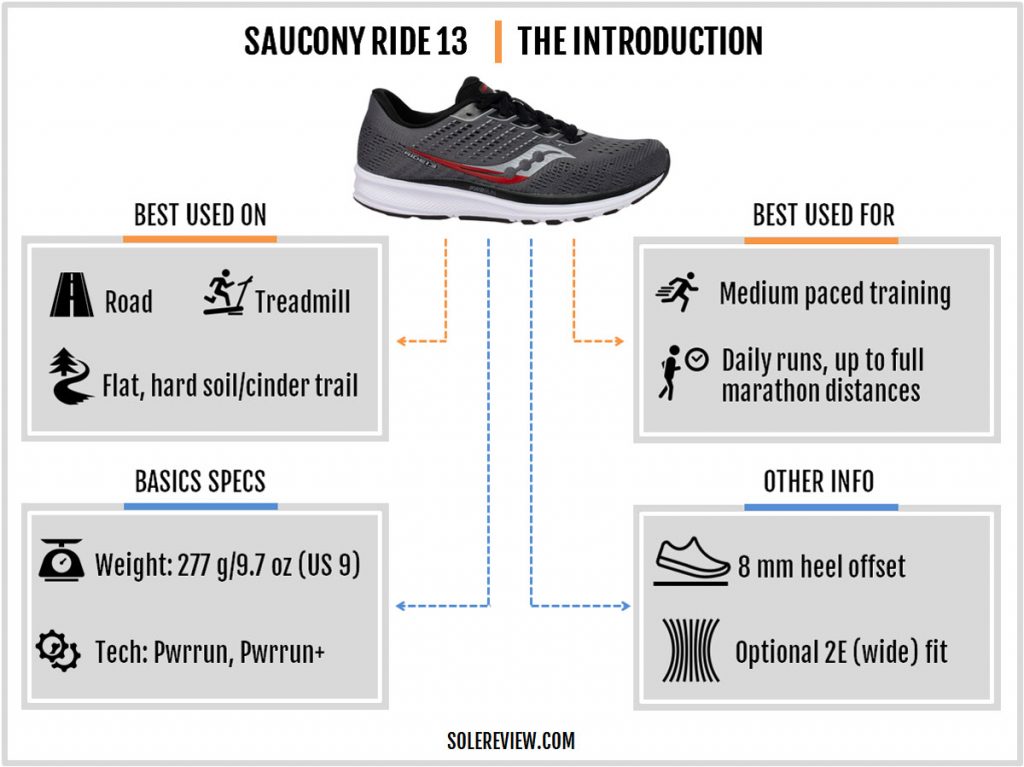 Like most marketing adjectives, consistency is a word that’s thrown around loosely in the athletic footwear industry.

However, very few shoe models – or brands, for that matter – are true specimens of consistency. Every year, many running shoe models receive their annual updates while often retaining their name.

Somewhere within that all that flux are a few running shoes that resist the temptation to ‘upgrade’ and take the ‘don’t fix it if it isn’t broken’ adage to heart. Shoe models like the Brooks Ghost and Glycerin come to mind, and so do the Mizuno twins of the Rider and Inspire while carefully testing the waters with the ‘Waveless’ Wave Sky and Horizon.

And of course, there’s yours truly – the Saucony Ride.

There is a fine line between product consistency and design apathy. Perhaps apathy is too strong a word; fear of change is more appropriate. Asics used to be fearful, until they were not. Mizuno is still comfortable with its Wave-equipped line-up.

The V7’s midsole had a firm and supportive ride under a relatively snug-fitting upper. Over the years, subtle updates like the removal of the crash pad and the addition of e-TPU ‘topsole’ led to minor changes in the ride quality.

The remainder of the changes is just a result of the running shoe evolution. You know, things from the standard design vocabulary that involves an engineered mesh upper instead of stitched overlays, the removal of a midfoot shank, and the adoption of minimalist styling.

Though both the Brooks Ghost and Saucony Ride are neutral trainers that make for versatile daily trainers, there’s an important distinction. The Ghost is a lot softer than the Ride; the latter is the ‘game day’ version of the Brooks shoe.

Though the first two layers of foam (the insole and the topsole) provide immediate cushioning, the Saucony Ride 13’s midsole has a firm overtone. This gives the Saucony product an edge over the softer Brooks during speedier runs.

The biggest change on the Ride 13 is something that everyone can see – it’s the removal of the ISOFIT lacing system. The Ride ISO 2’s midfoot was based on straps that connected to the lacing.

The Ride 13 begins with a clean slate, and reverts to a simple yet effective lacing template. And there’s still an internal gusset that holds down the tongue in place. However, the 13’s forefoot has a mite less space because of the re-positioned toe-bumper.

The ride quality is pretty similar, given how both the ISO 2 and Ride 13 utilize a three-foam (insole, topsole, and midsole) stack in a familiar configuration. The 8 mm offset remains, and so does the overall ride firmness.

When seen from the outside, the Ride 13 seems like a fairly simple shoe.

A full-length, EVA-blend midsole (aka the Pwrrun) provides most of the cushioning. Underneath, the outsole has a familiar geometry that lays out multiple rubber lugs separated by flex grooves.

The said midsole has a firm density. Squeeze it, and there’s not much give or softness. That translates directly into a steady, firm ride – the kind that gives the Ride 13 its use-case versatility. 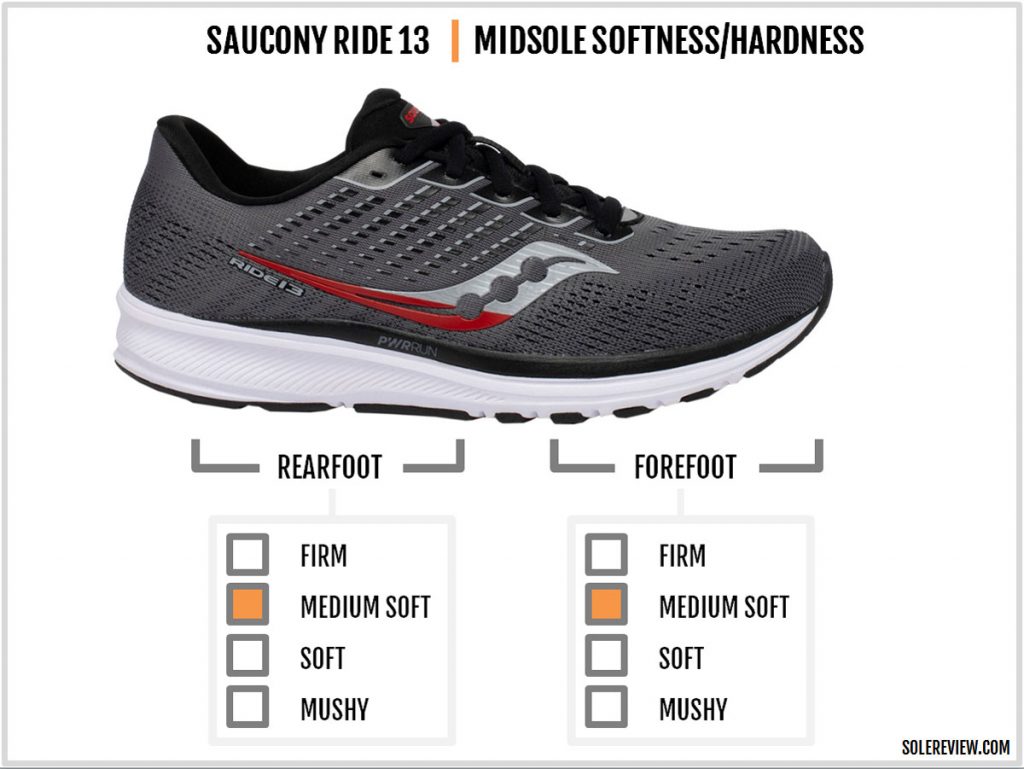 However, there are a couple of things that are not visible from the outside. The first is the chunky removable insole made of a smooth, molded foam. The second is the ‘topsole’ made of Pwrrun+, a foam that’s used in models like the Triumph 18.

Cast your mind to the Ride ISO 2, and it’s plain to see that the Ride 13 isn’t all that different, if at all.

Though the Ride 13’s midsole no longer has ‘EVERUN’ emblazoned on its sides, the insides have a near-identical arrangement.

The topsole under the insole is still made of modified Everun (Pwrrun+). It no longer has the beady structure that used to look like a Salami-ed slice of adidas Boost. The topsole has a smooth texture and works together with the insole to deliver step-in cushioning. 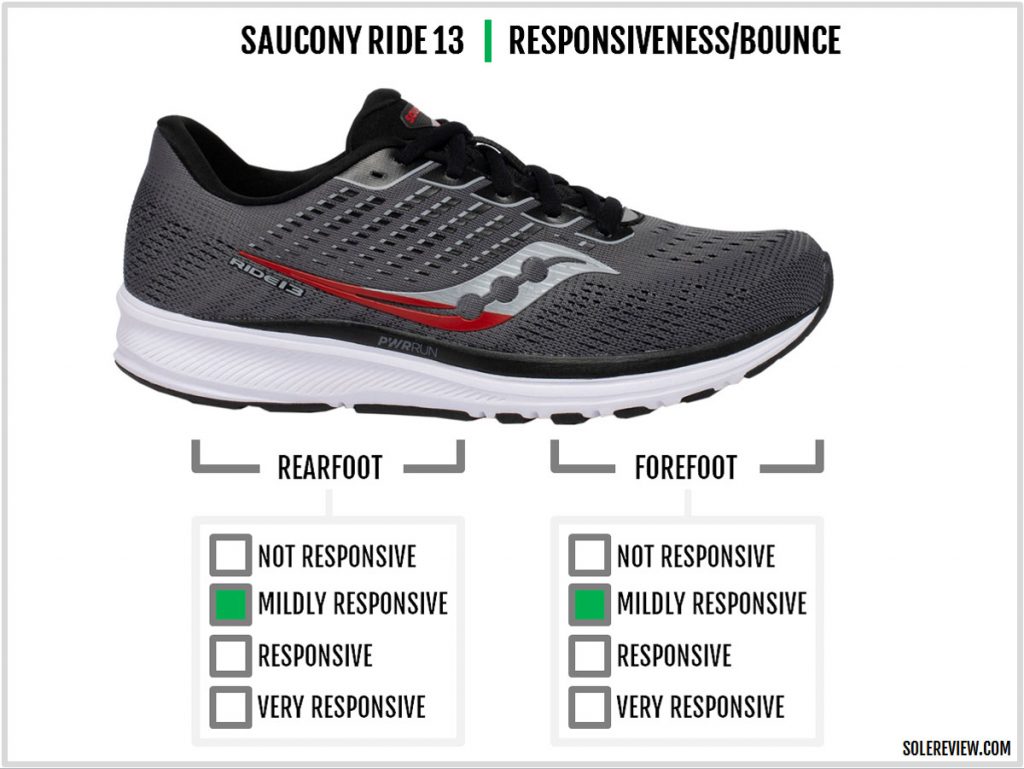 Most people conflate the top-layer cushioning with that of the midsole. Hence, terms like ‘bouncy’ and ‘responsive’ will be used when describing the Ride 13. But the midsole, by itself, isn’t responsive. Padded? Yes. But springy? Not by a long shot.

The Pwrrrun+ midsole doesn’t feel noticeably different than what the Ride ISO 2 had. It’s pretty firm by most neutral trainer standards, and one that has bode well for the Saucony Ride over the years.

If you have any experience with the prior versions of the Saucony Ride, then this model will feel familiar – and that’s what we meant by consistency.

It’s beneficial to have this firmness under the foot, as it makes even slightly higher-paced (7 min/mile or 4:30 min/km and faster) runs enjoyable.

At the same time, the dual layering of the Pwrrun+ Topsole and the thick insole makes easy runs (10 min/mile or 6min/km) comfortable. Long-distance runs of a half-marathon and beyond do not punish the feet, thus adding to the Ride 13’s capabilities.

Once the run picks up speed, the higher cadence (which is usually the case) pounds through the soft layers quicker, so their cushioning effect is diluted. Here, the firm ride of the midsole comes into play.

So now you know why runners like the Ride 13 so much. It delivers a different ride experience at different speeds. Cushy while slow, efficient while fast.

Other factors also help make it a versatile trainer. The firmness and balanced sidewall design make the ride stable, neutral, and consistent. The transitions feel smooth due to the uniform stack of material.

The heel crash pad is split with a transition groove, so that makes rearfoot landings gradual and centered. The rounded bevel helps too; it’s not a design afterthought but an integral part of the cushioning system.

The 8 mm heel-to-toe offset is the sweet spot between low offset (4 mm) and high drop (12 mm) running shoes, so that’s another reason why it appeals to many.

The rear and front stack heights of 32 and 24 mm mean that there’s sufficient foam coverage regardless of individual gait mechanics.

The outsole is also split into softer and firmer sections, with the front being serviced by the blown rubber strips that are separated by flex grooves. There’s a certain amount of break-in required due to the firmness, but that’s the norm for running shoes of this class.

And by the way – the forefoot no longer has the ‘crystal rubber’ strips. In their place are regular-colored lugs with adequate traction.

Nestled within all those updates is a ride quality that feels unmistakably like the Saucony Ride we’ve come to know and love. There are no surprises here, the Ride 13 is an excellent daily trainer that offers a wide repertoire of acts.

Of course, there’s always the option of adding other shoes to the rotation. 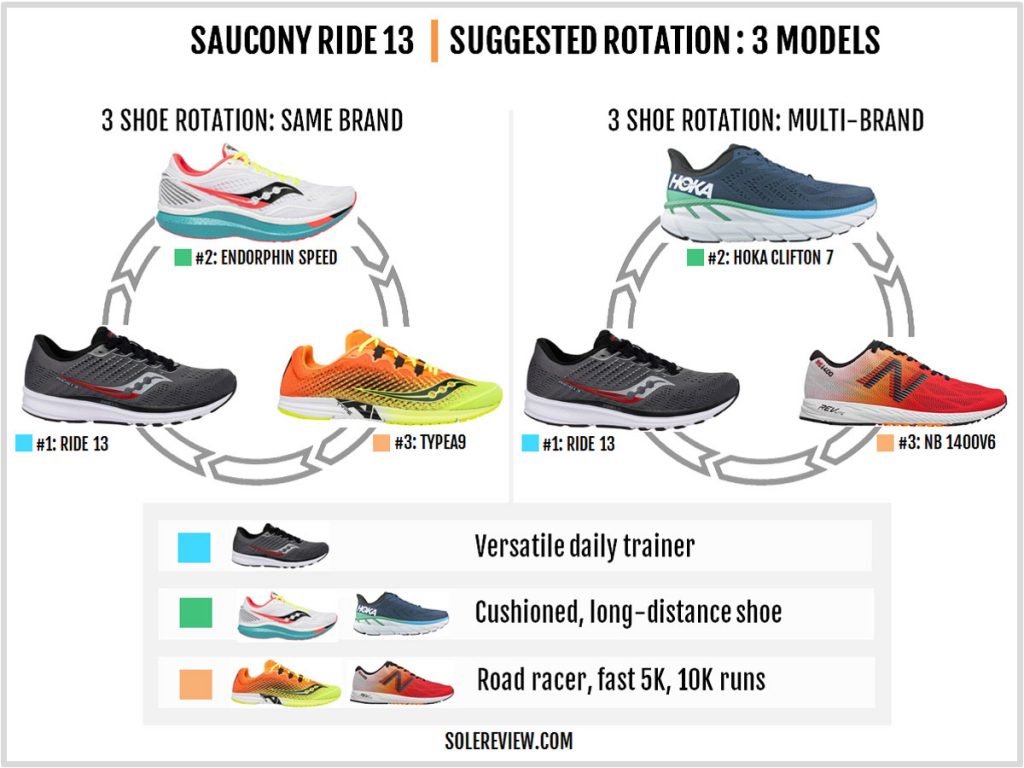 For example, the Endorphin Speed delivers a mileage-capable cushioning with the plate-infused pep – thanks to the Nylon plate encased within a Pebax-based midsole. And it’s 2-ounces lighter than the 9.7-ounce (277 gram) Ride 13.

We also see the Hoka Clifton 7 adding rotational value. It’s nothing like the Endorphin Speed, but it’s an excellent choice to run comfortable long-distance miles in.

The Saucony Type A9 and New Balance 1400V6 are reliable speed-shoe options, as they always have been.

IS THE SAUCONY RIDE 13 DURABLE? 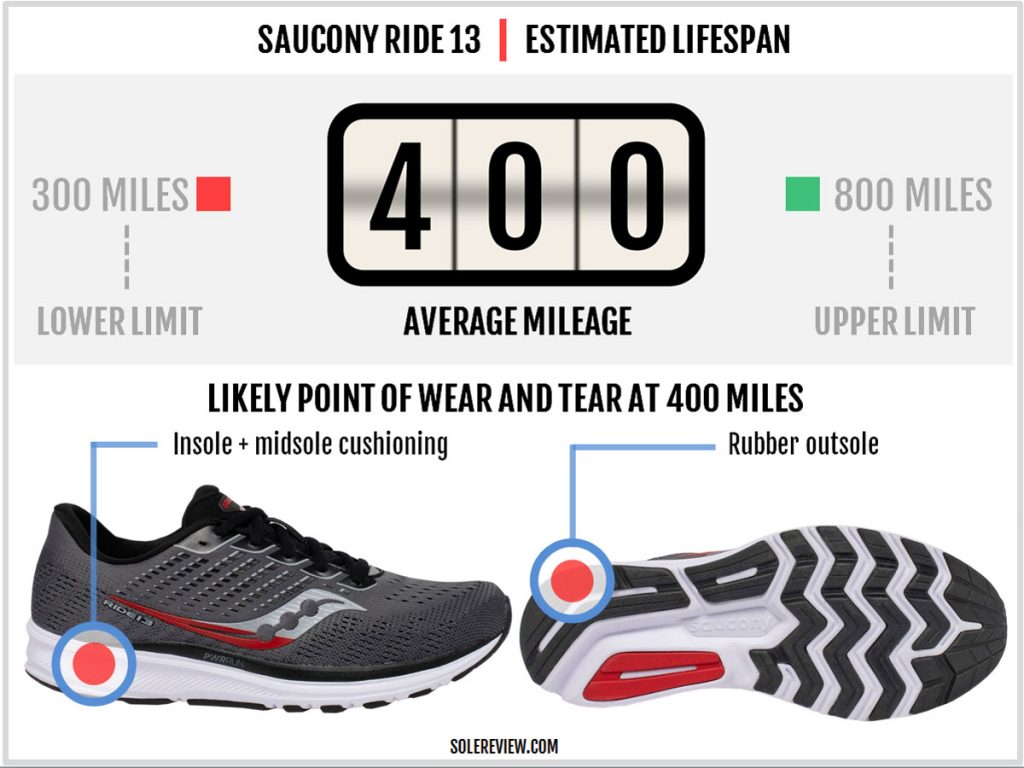 The Saucony Ride has never been the one for durability-related complaints, and it won’t do so now.

The firm midsole decreases the chances of premature flattening, and even though the insole will eventually lose its cushioning, the e-TPU topsole below it will keep going. The rubber-clad outsole is robust, and takes abuse well. A natural wear and tear process is to be expected, however.

No problems with the upper either. Everything’s well-stitched and glued together. 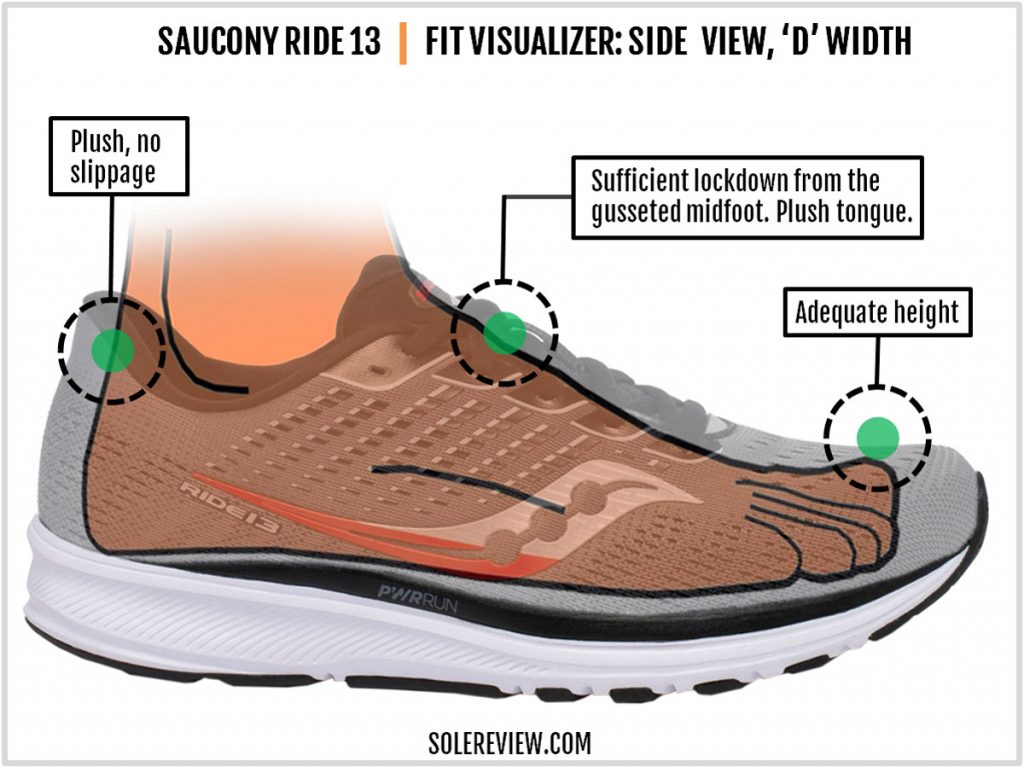 Just like the ride quality, the Saucony Ride’s upper has been (more or less) consistent in how it fits. The sizing is true in length, despite the Ride 13’s toe-box being a mite snugger than the ISO 2. 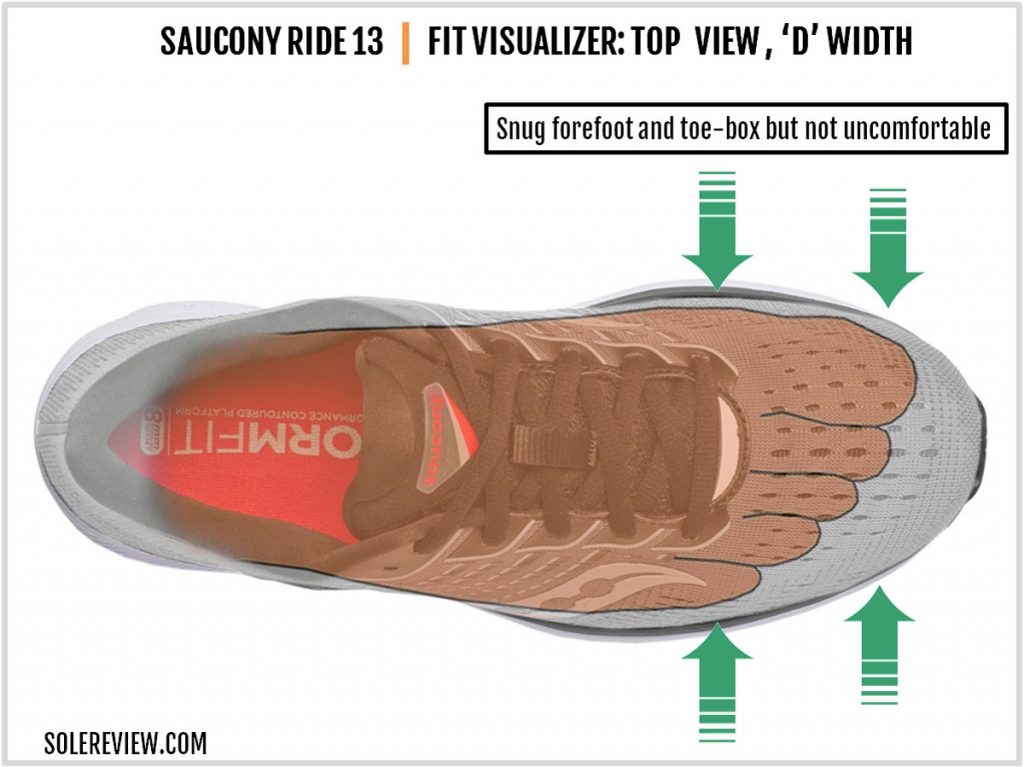 And of course, there’s the missing ISOFIT strapping system that nobody cares about. The Ride 13’s midfoot is traditionally built with 5 + 1 lacing rows. An internal gusset still exists, and that keeps the tongue in place while making the midfoot fit smooth and secure.

The Saucony Ride 13 is also one of those few rare shoes not to succumb to the flared heel design. A plush, quilted collar holds the foot in place, with the padded tongue being a willing accomplice.

The outer shell design is conventional as they come. Which is a single piece of engineered mesh upper with high-density printing and welded details. Reflectivity has been improved, as the Ride 13 gets both forefoot and heel trims for low-light visibility. 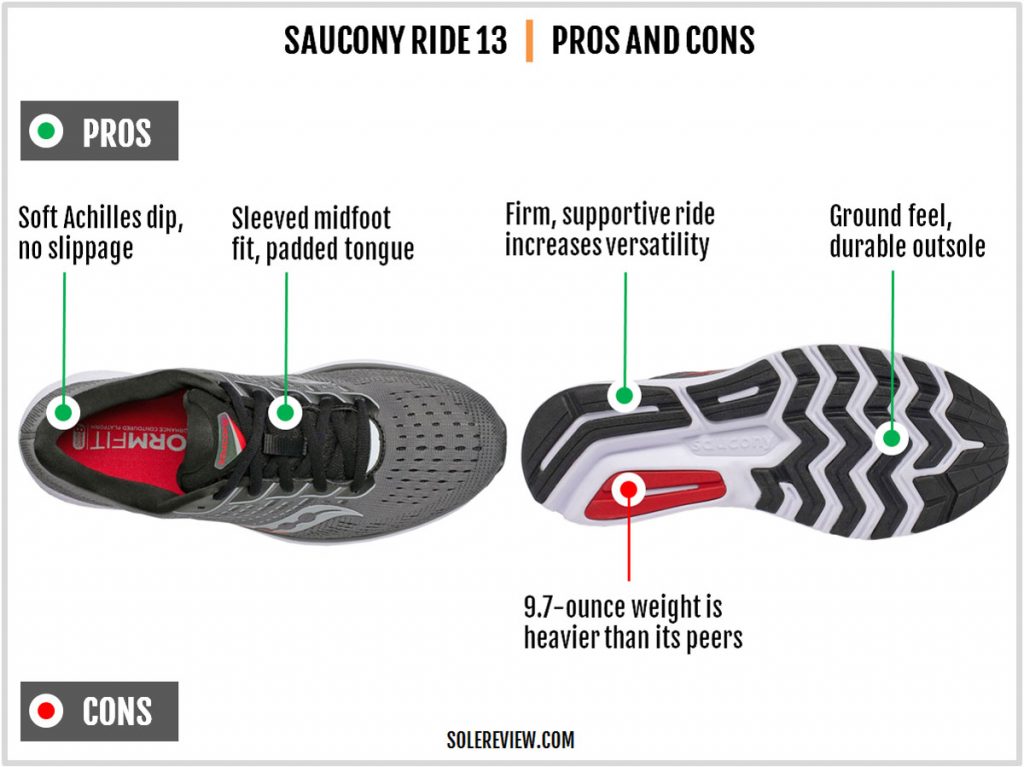 As you can see here, the Saucony Ride 13 doesn’t have functional flaws. One could point out the 9.7-ounce weight as a negative, but then there’s compensation in the form of the fully-clad rubber outsole and the firm midsole that aids stability.

This Saucony shoe series has been popular for a reason. It’s game for anything between easy daily runs to charged-up thresholds, all while striking the balance between ride stability and comfort. 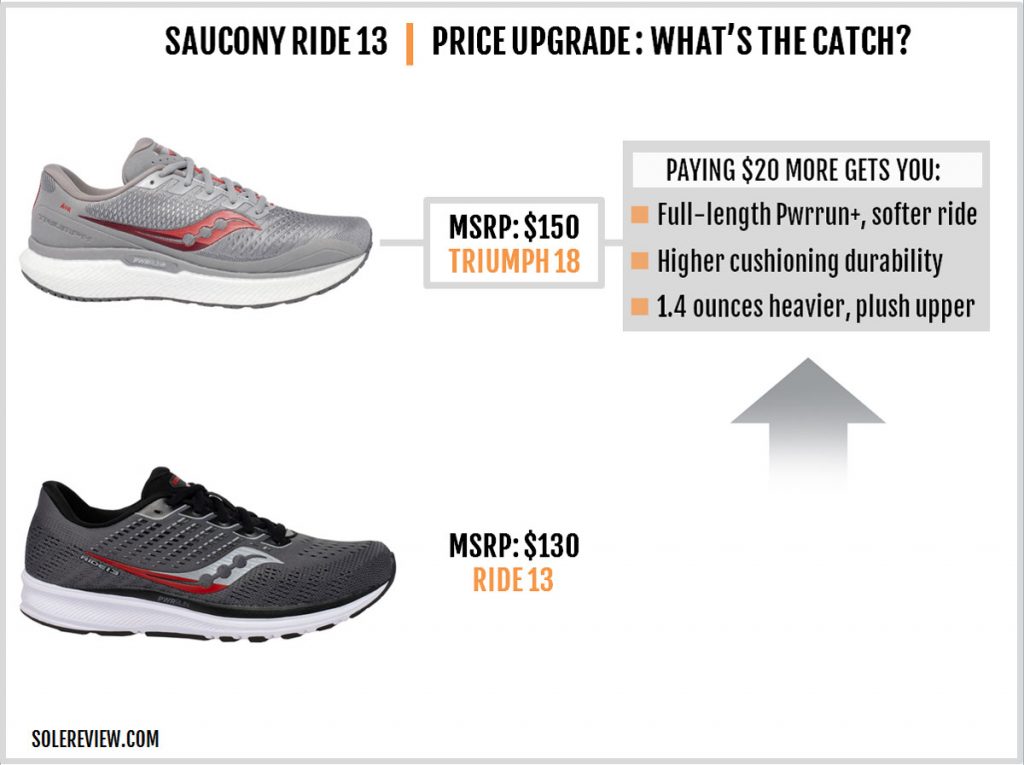 There’s a $20 difference in retail price between the Ride 13 and the Triumph 18, and the said difference gets you a cushier shoe with a full-length Pwrrun+ midsole. The T-18’s upper also has softer upholstery.

That certainly makes the Triumph 18 a plusher affair during long-distance runs, but there’s a performance trade-off. The $150 shoe is nearly an ounce and a half heavier than the Ride, and that – along with the softer ride – translates into decreased versatility. Can both be used in a rotation? Sure. Can they be substitutes? No.

SHOES SIMILAR TO THE SAUCONY RIDE 13 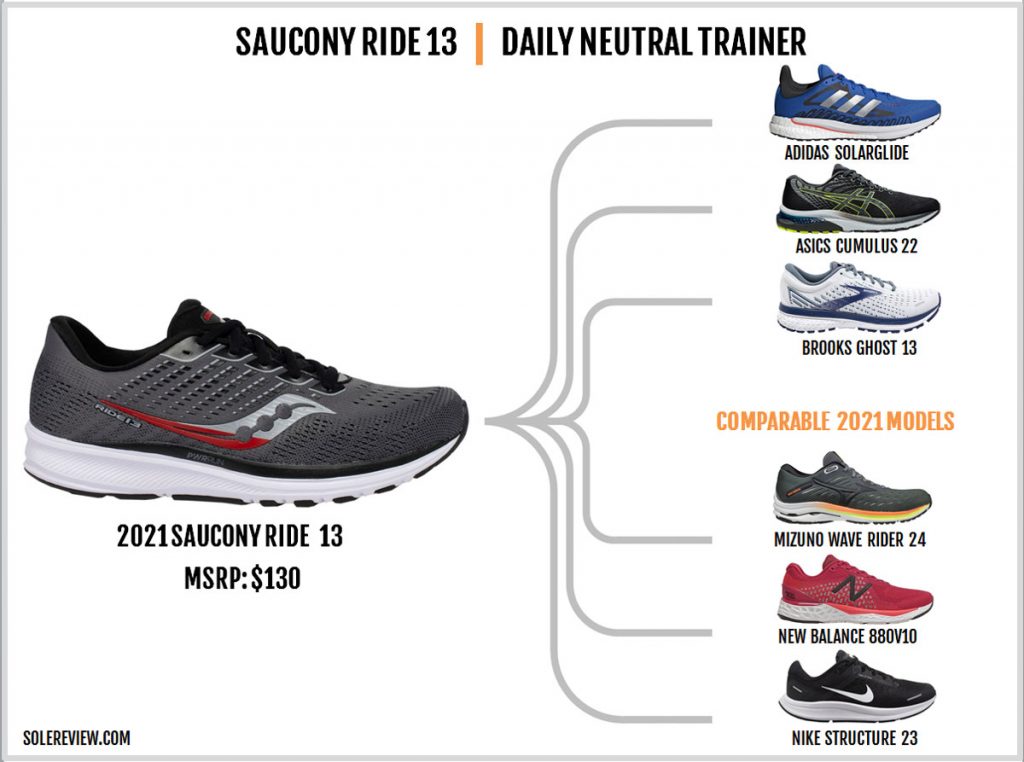 Of all the shoes here, we see the Mizuno Wave Rider 24 as the Ride 13’s closest match. The Wave plate adds firmness to the rear, and the midsole density isn’t overly soft. Though the Rider has more room than the Saucony, it’s very versatile with its cushioning delivery.

The other models are our usual neutral trainers – the Brooks Ghost 13, New Balance 880V10, and the Cumulus 22. If a softer, Triumph 18-like ride is what you prefer, then it’s worth exploring the adidas SolarGlide as an option. It’s been updated for 2021, if that helps.

Some may be surprised to see the Structure 23 here instead of the Pegasus 37. That’s because the Structure 23 and 22 are nothing like; the 23 is a neutral trainer that feels like a Brooks Ghost with a forefoot Zoom Air bag. Yes, it’s that different.