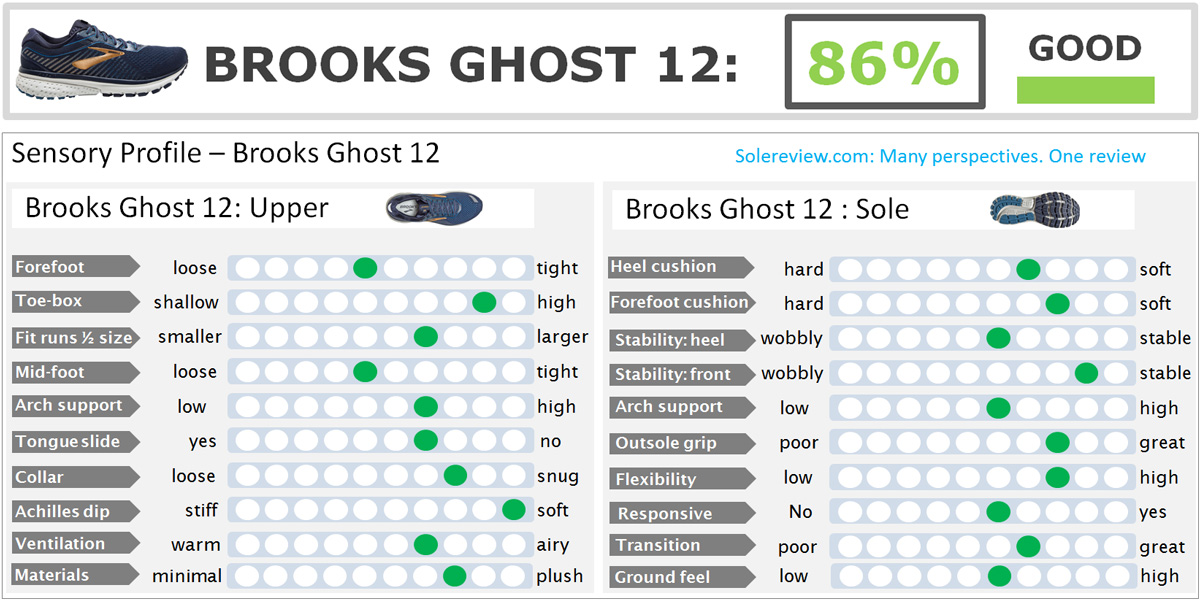 Brooks’s marketing pitch: A just-right balance of softness and responsiveness 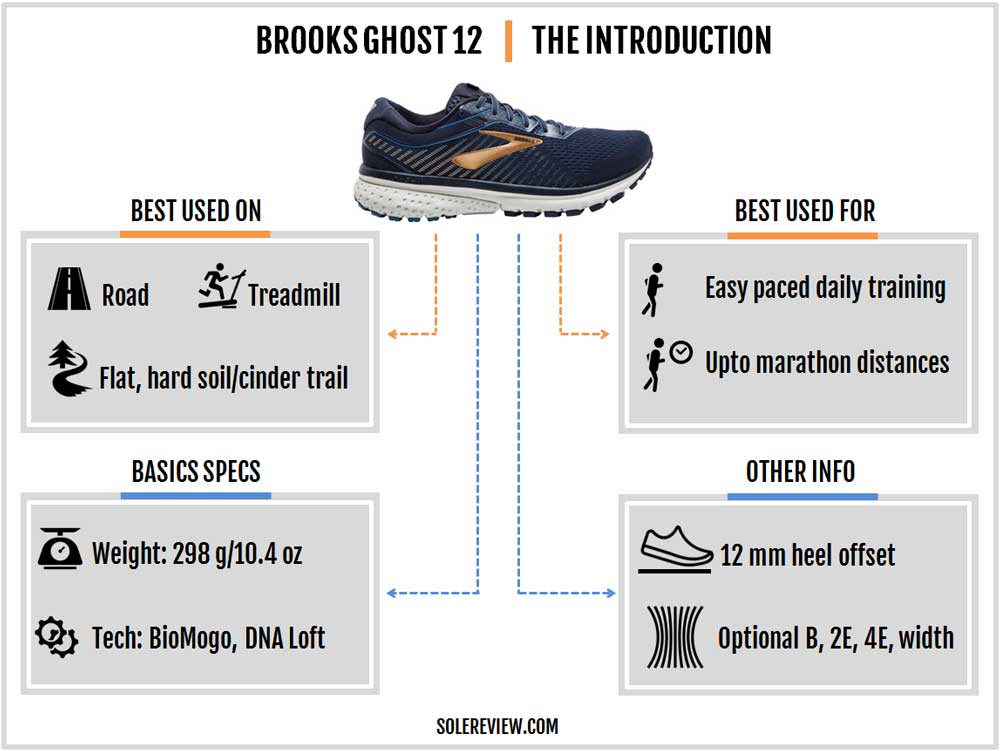 Often, the personality of a brand is reflected in the shoes they make. So if you were to run in a pair of Ghost 12 without the logo, there’s a high probability that you would have successfully guessed it to be a pair of Brooks.

That’s how much ‘Brooks-ness’ the Brooks Ghost 12 has. The midsole doesn’t have the most bouncy foam nor is it the lightest. Yet, it strikes the right balance between ride stability and long-distance comfort.

So how Brooks markets the Ghost is right on the money.

Brooks running shoes are known for their plush uppers and interiors, and you’ll find the Ghost to be no different. In fact, for this year, the Ghost 12 gets a new upper which looks and feels better than the Ghost 11.

So while the ride quality feels remarkably familiar due to a similar (not identical though) sole set-up, the new upper is a strong reason to upgrade.

If you’re new to Brooks, the Ghost 12 can be summed up as a comfortable neutral running shoe for daily training and long-distance runs.

Cushioning technology-wise, the Ghost might not be the shiniest thing in town but it is a dependable workhorse with very few flaws.

The G-12’s midsole design is brand new but similar to the 11 in overall design, so there’s only a slight change in how the Ghost feels underneath your foot. It feels softer under the forefoot, but only just.

The upper fit hasn’t altered much either except for the heel, which is softer than the 11. The Ghost 12 makes the Achilles dip softer by using a different mesh and reducing the use of synthetic over the outside heel. The upper uses a new engineered mesh with a softer feel than the 11.

But these upgrades aren’t free. The Ghost 12 gets a $10 bump in retail price over the 11, so you’re literally paying extra for the upper enhancements.

Unlike the uniform midsole density of competing models such as the Saucony Ride ISO or the Nike Pegasus, the Ghost’s heel crash pad results in a markedly different rearfoot and forefoot ride behavior.

The forefoot has a relatively straightforward set-up. The thick stack of midsole foam works together with the blown rubber outsole and the removable insole to produce smooth and cushioned forefoot landings. The flex grooves splitting the rubber segments allow the midsole to flex naturally and help toe-offs.

There’s plenty of road-grip due to the tacky outsole rubber and the full-contact geometry.

Under the heel, a firmer crash pad made of DNA Loft is integrated into a softer BioMogo foam. We’re not sure what BioMogo is made of, but it feels like a resilient EVA compound. The DNA Loft feels like a firmer version of the Nike React – a little rubbery, a little EVA foam-like.

Rearfoot strikers will get a cushioned yet a slightly biased ride which favors the lateral side. That’s understandable given how the heel is designed; the groove attaching the crash pad makes it easier for the midsole to compress.

It is important to note that the bias doesn’t come with a stability trade-off. The firmness of the DNA Loft wedge and the groove under the heel keep the ride balanced throughout the gait cycle. 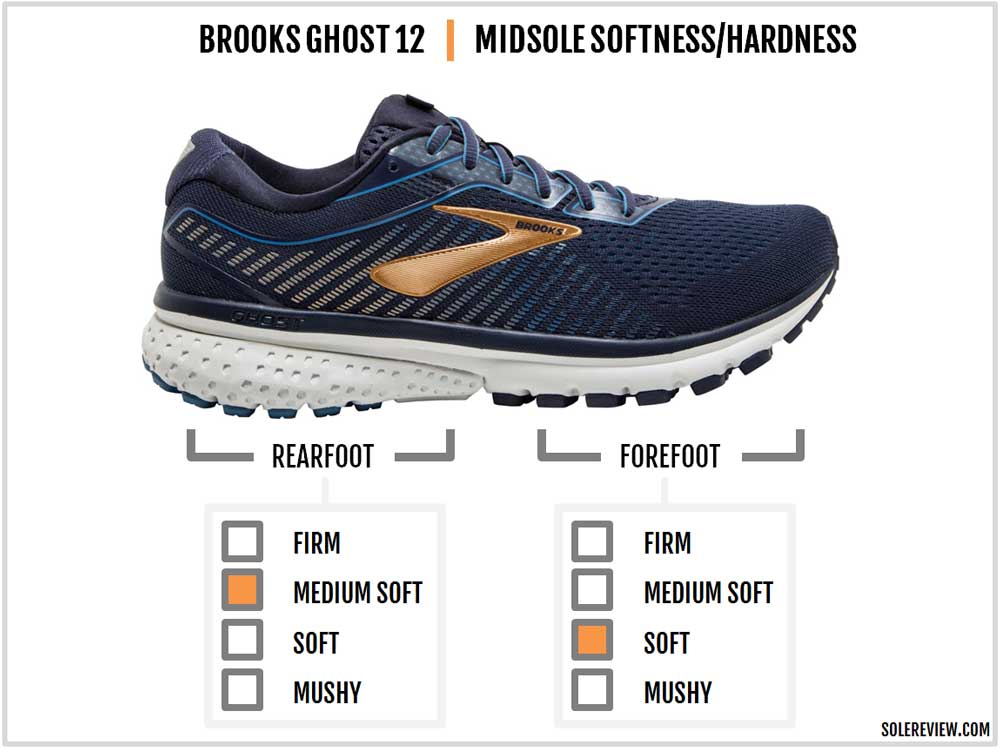 That’s one of the highlights of the Ghost 12’s ride; it isn’t excessively soft so the weight transfers feel efficient and connected. Despite the DNA Loft piece, the rearfoot happens to be firmer than the front.

It’s easy to see why. The firmer crash pad forms the entire landing zone so for heel strikers, so it’s going to be the first point of contact.

Based on the midsole firmness alone, the Brooks Ghost 12 has a reasonable degree of versatility. The ride isn’t sluggish so you can work in faster training runs from time to time. In this regard, the Ghost 12 feels more agile than the heavier Glycerin. 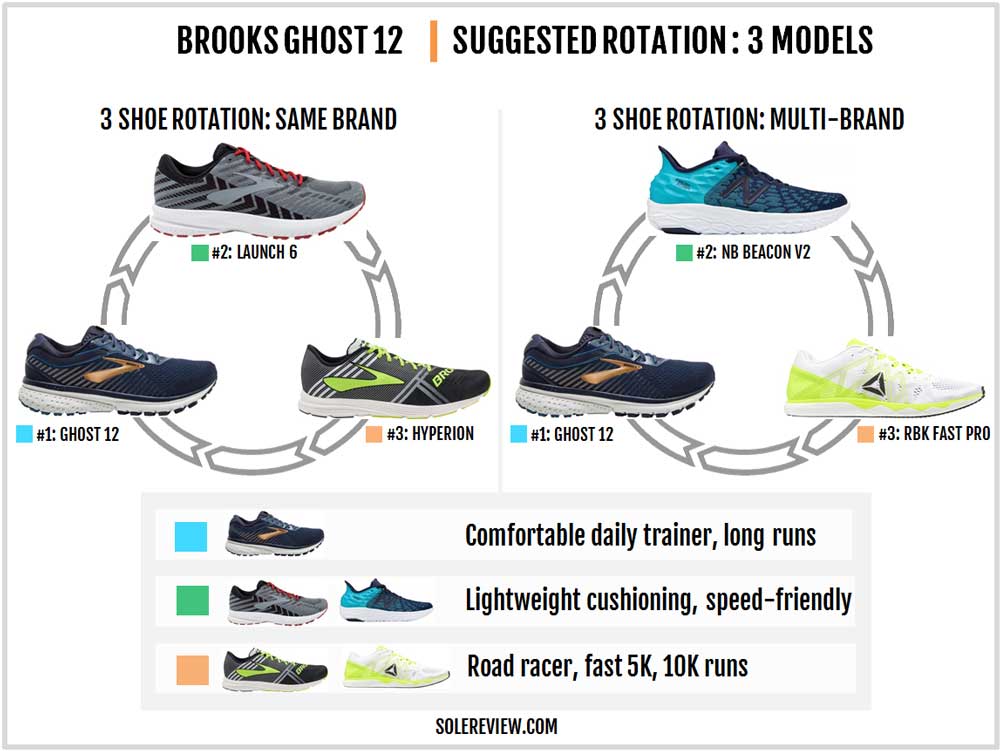 But if your training runs are consistently faster than 5 min/km (7 min/mile), then perhaps you should consider running in something firmer than the Ghost. The Launch 6 is excellent for that purpose; the firm ride makes fast runs enjoyable without being harsh on your feet.

A similar tempo-friendly shoe with a softer ride is the New Balance Beacon V2 – we prefer the Beacon V1 due to the heel design though.

Brooks doesn’t have a great road-racer but the narrow-fitting Hyperion is the next best thing for 5k and 10k races. If your budget allows it, the Reebok Floatride Run Fast Pro has no equals. Else, the New Balance 1400V6 is a superior alternative to the Hyperion. 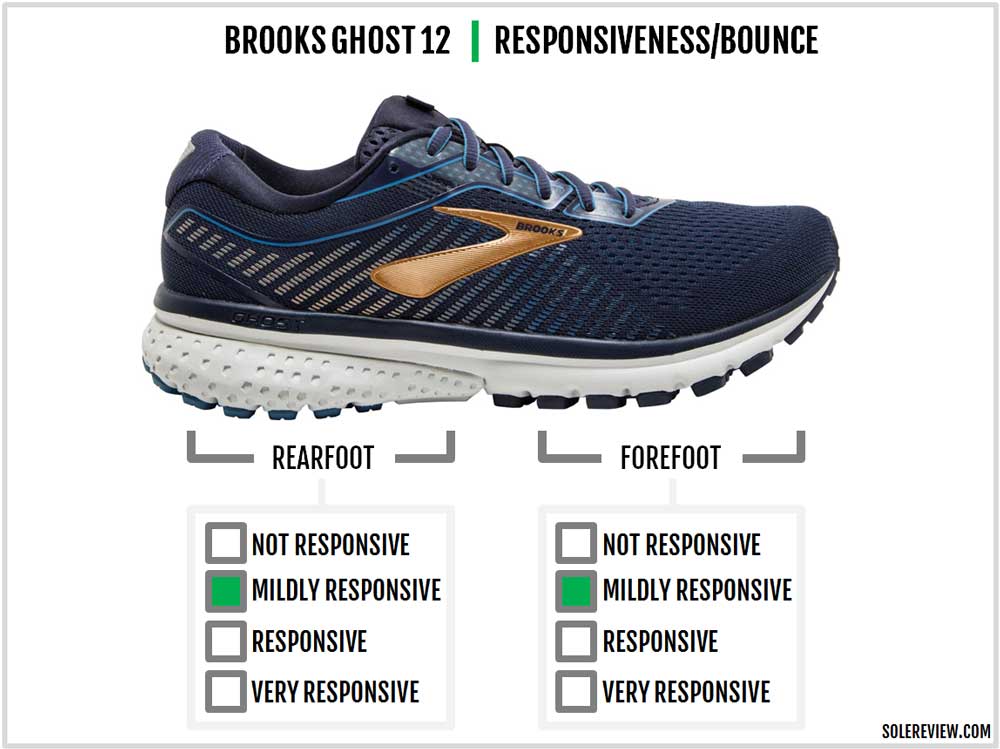 It’s worth underscoring that the Brooks Ghost’s ride doesn’t qualify as responsive, especially if you’re comparing it to midsoles made of e-TPU (Boost, Floatride Energy, Everun), Pebax (ZoomX, Floatride) or synthetic rubber (React). The DNA Loft is mildly responsive, but then most foams usually are.

Various competing models offer a ride with high levels of responsiveness spring-back; scroll down to the bottom of this review to know more.

The Brooks Ghost 12 plays to its strengths, which is being a dependable shoe for comfortable daily runs and beyond. It doesn’t excel in one specific area but rather offers a well-balanced package which suits runners of all classes – whether you’re just getting started or planning to run your next marathon in the Ghost.

IS THE BROOKS GHOST 12 DURABLE? 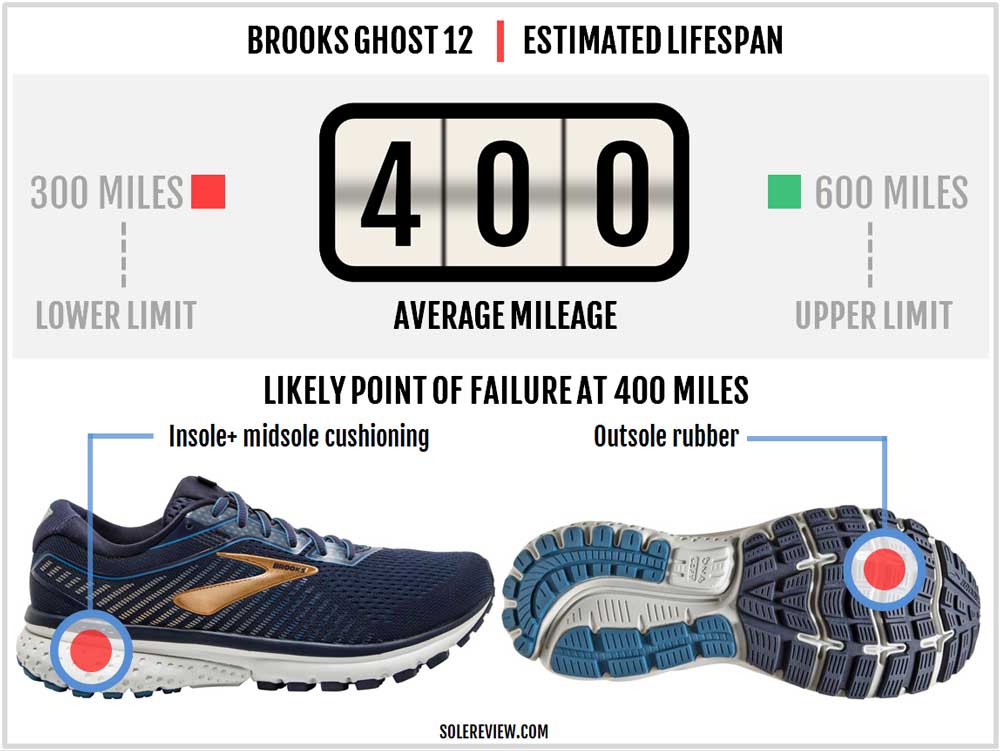 The outsole is made of soft blown rubber so it’s unrealistic to expect the longevity of models like the Saucony Triumph ISO with its crystal rubber outsole or adidas products shod with Continental rubber.

Still, the Brooks Ghost 12 has a reliable design with a low likelihood of parts failing prematurely. Based on historical feedback from the Ghost 11, 400 miles out of the V12 sounds just about right. 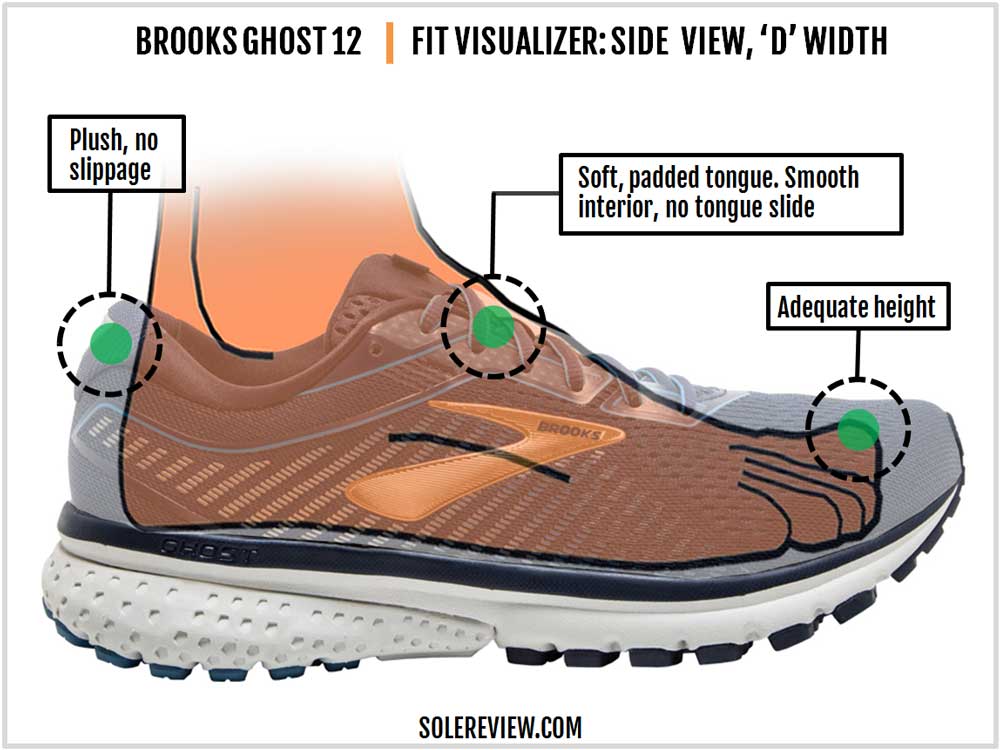 What an excellent upper; Brooks has done a great job with the Ghost 12 update. The redesigned upper is not just good to look at, but is also improved on the inside. The comfortable and well-proportioned interiors feel plush right out of the box without requiring any adjustment period.

The Ghost 12 gets a brand new mesh with a high-density printing treatment which Brooks calls 3D Fit Print. While they’re not as many pores on the forefoot and midfoot as the G-11, the engineered mesh has a soft hand-feel and sufficient ventilation.

The laces switch back to the plush, rounded ones instead of the flat ones on the 11. The quilted tongue doesn’t have a sleeve, but the small side loop on the tongue prevents the latter from sliding sideways. This is an ancient trick from Brooks’s playbook. 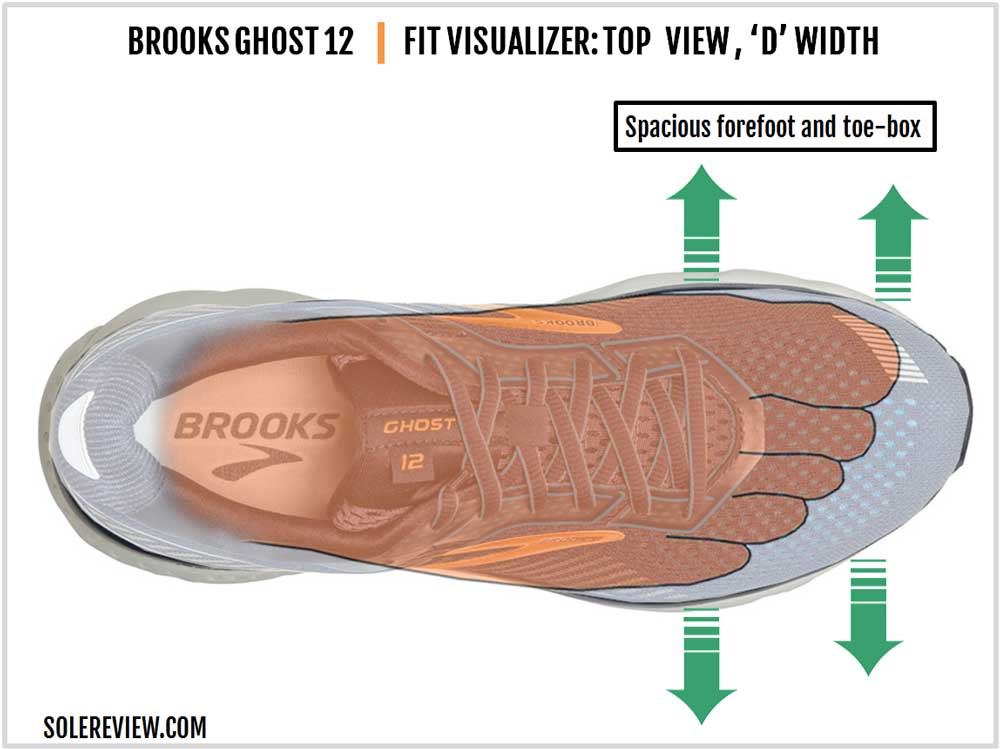 While the Ghost also sells three additional widths, the standard D width has a just-right fit.

The forefoot hugs the foot while allowing it to splay; the midfoot and the heel also do a great job at locking the foot down. The interior bumper creates a broad profile which doesn’t hem the toes in.

Worth noting is the redesigned heel which makes the Achilles dip softer. The collar now uses two kinds of mesh – a plusher one lines up with the Achilles while a smooth and soft kind forms the rest of the heel. There’s less synthetic and more foam behind the Achilles area, an update which increases upper comfort.

Adding 3D Fit Print to the lacing and midfoot areas makes the Ghost 12 look so much better. It looks like an expensive shoe; more so than the 11. With larger reflective trims, the toe-box and the heel get significant updates for low-light visibility.

The Ghost 12 is also available in a Gore-Tex version for running in rains. 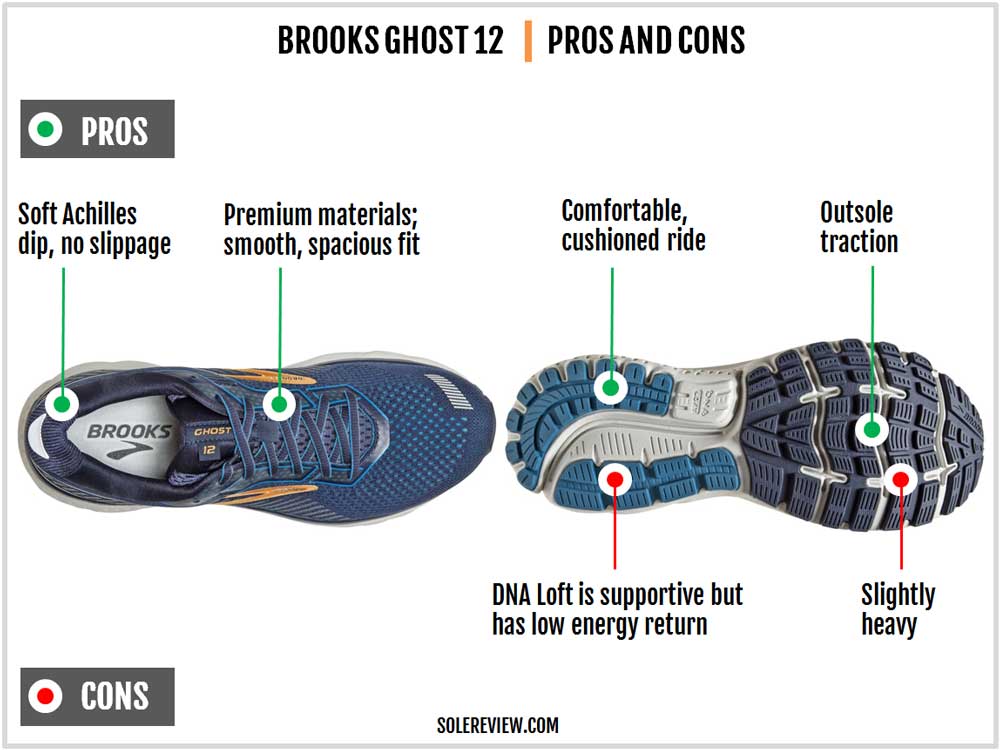 There are many good things to say about the Ghost 12. It’s plush, just-right upper fit is a cut above the rest. In a marketplace full of bland, single-piece mesh uppers, Brooks’s use of plush materials and external design elements differentiates the Ghost from its peers.

The dual-density midsole has a ride which is likely to make most happy while offending none. The DNA foam package is underwhelming if measured by contemporary responsiveness of weight standards. But as a whole, the cushioned and supportive ride makes short work of whatever you throw at it.

SHOES SIMILAR TO THE BROOKS 12 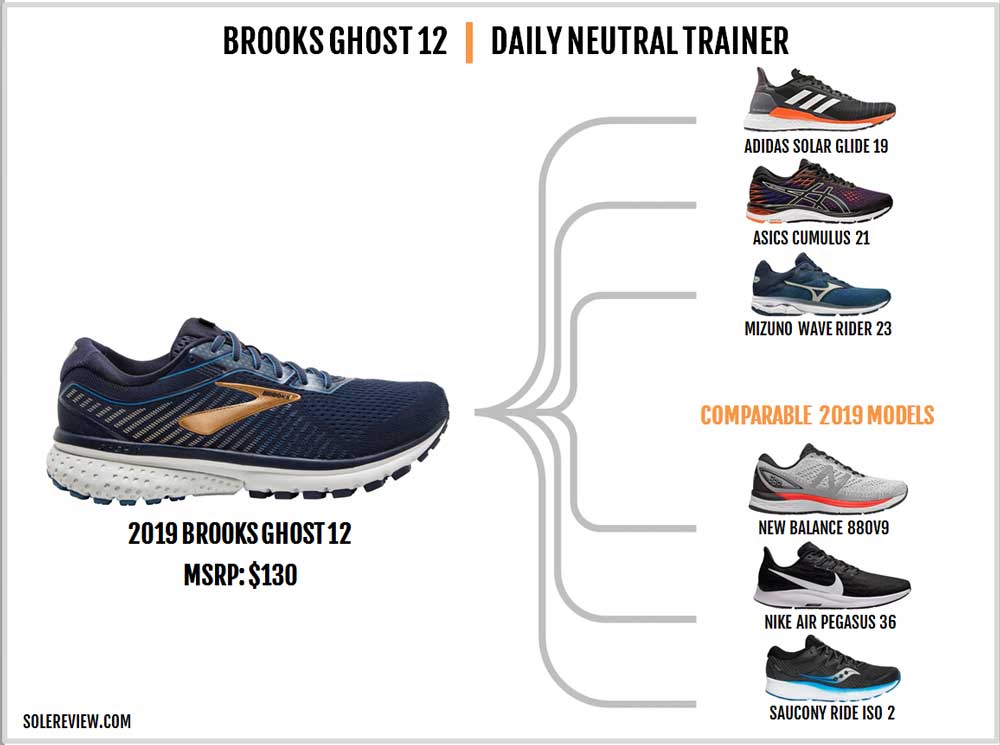 There are a couple of models which are in a similar weight class as the Ghost. The Asics Cumulus 21 and the New Balance 880V9 come to mind – both employ a conventional design with dual-density midsoles and a no-sleeve upper.

The Cumulus is softer than the Ghost while the 880 has a slightly firmer ride – though that could be attributed to a continuous dual-density foam stack as opposed to the Ghost’s heel-only crash pad.

Responsive cushioning softness is found on the adidas Solar Boost 19 – a neutral trainer with a high-volume Boost foam midsole. Also take a look at the Reebok Forever Floatride Energy – a versatile $100 shoe with high levels of lively cushioning.

On the versatile spectrum of neutral trainers are the Nike Pegasus 36, the Saucony Ride ISO 2, and the Mizuno Wave Rider 23. While all three have different ride and fit mannerisms, their relatively firm ride makes them suitable for even higher-paced runs – something which softer shoes will feel out of depth in. 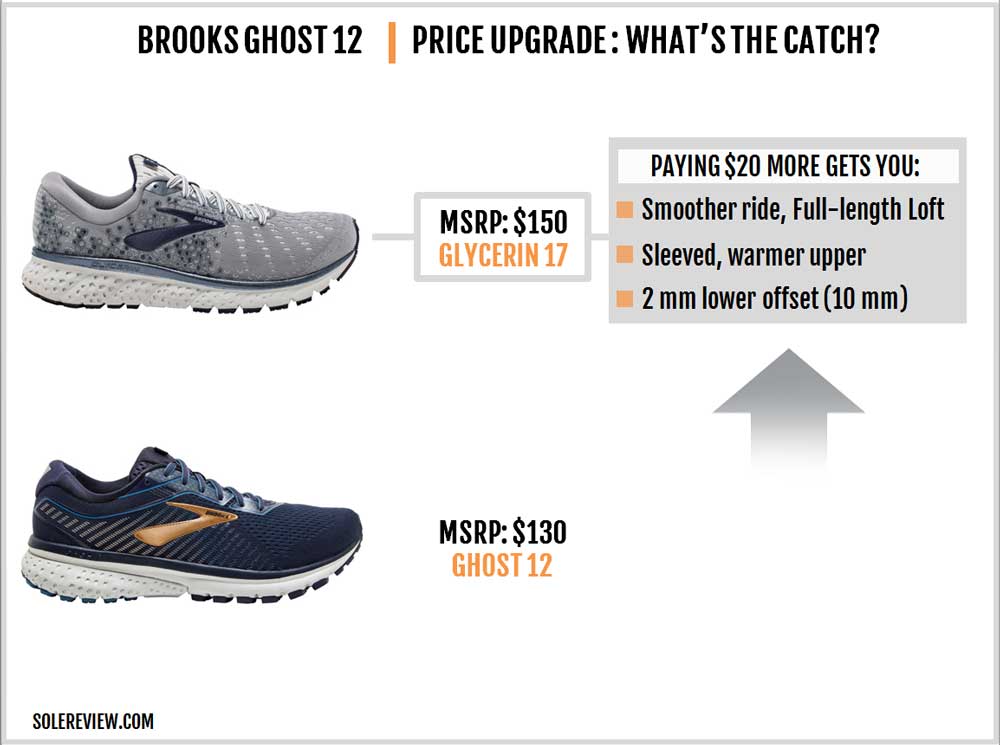 The full-length DNA Loft midsole of the Glycerin isn’t soft as Brooks markets it to be. In lieu, you get a smoother ride with better stability due to the Glycerin’s single-density midsole. When compared to the Ghost, the Glycerin’s upper fits snugger and warmer due to the inner bootie.