The Hanzo S v2 is like a track spike but for asphalt. Extremely lightweight, efficient, and grippy, the Hanzo is one of the best racing flats on the market. For a flat, it has a comfortable fit.
Lightweight, quick transitions, outsole traction, ventilation, price
The tongue flap needs to be adjusted before wear, long laces 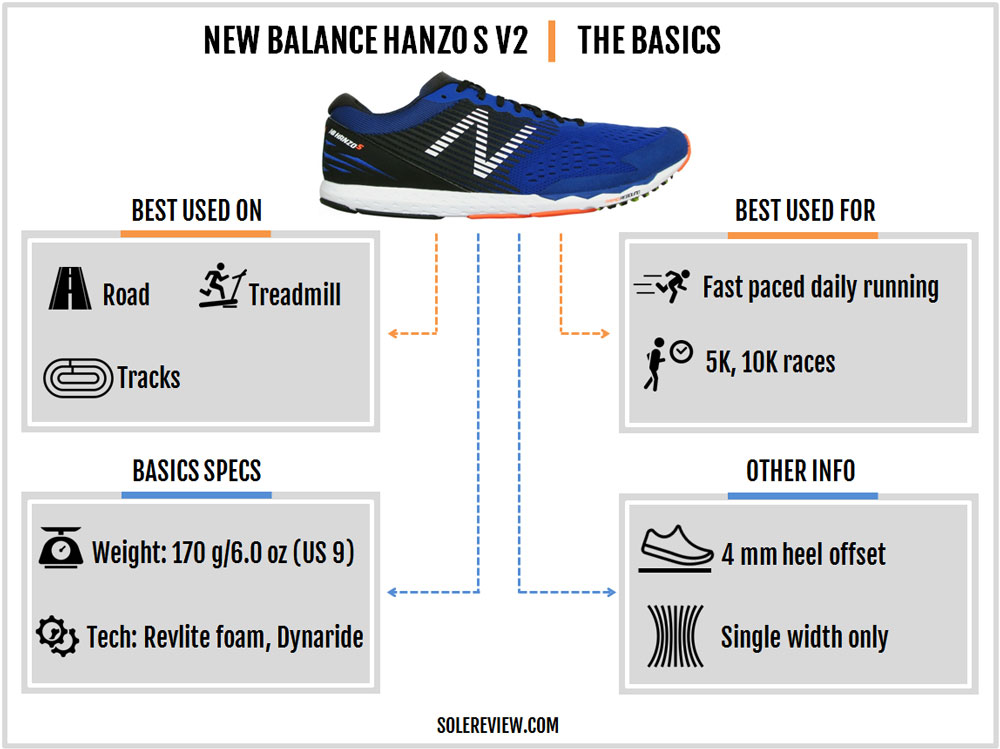 Outside Japan, superior road racing flats are hard to come by.

The Japanese athletic footwear industry is a study in contrast. On one hand, Japan is synonymous with street fashion. At the same time, it is also a purist’s market, running shoes included.

A small population of Japanese consumers is willing to pay good money for specialized products such as racing flats. Thus, it is not uncommon to find Japan-specific flats in a local running shoe store.

And we’re talking about high-end flats here. Brands like Asics and Mizuno will also go to the extent of offering made-in-Japan tech flats manufactured with the finest materials.

There are other ways in which brands pander to the local market. At the time of writing this review, Nike retails the Lunartempo 2 in Japan, a shoe thought to be long extinct. adidas sells the widest collection of racing flats on its Japanese website, including a $200 Stella McCartney adizero Japanboost.

Given the discerning taste(s) of Japanese runners, road racing flats can’t be merely good if they have to compete – they need to be excellent.

Which the New Balance Hanzo S V2 is. It succeeds the Hanzo V1, a shoe developed by New Balance Japan.

If that sounds familiar, you must be thinking of the adidas Takumi Sen – another excellent, but now out-of-circulation (not in Japan, though) racer which was originally made for Japan. Adidas sells a very wide adizero assortment in Japan, a country where the Takumi is now in its fifth version.

And you can clearly tell when a racing flat is based on the Japanese market. The product packs in a lot more value when compared to road racers which retail elsewhere.

For example, very few $120 racing flats have DSP (Dual Stencil Process) outsoles. The Hanzo S V2 has something similar, and New Balance calls it Dynaride. The Hanzo also has a surprisingly well-kitted and comfortable upper for a flat. 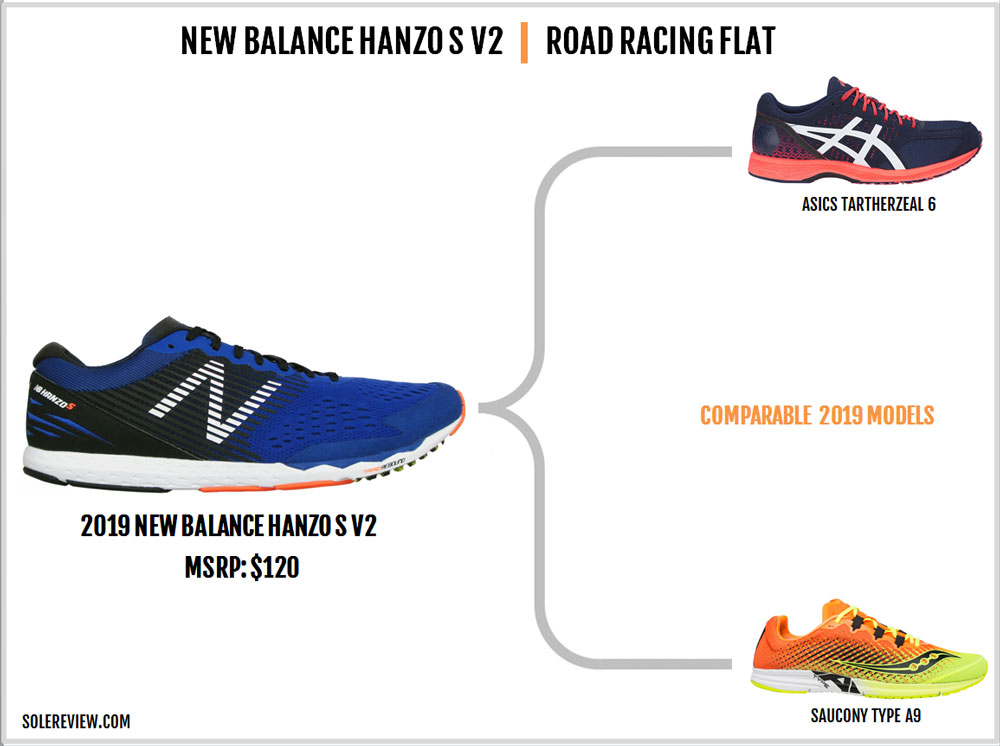 Asics sells the Tartherzeal 6 with a DSP outsole – the kind which has dense lugs mounted over the forefoot, but at a $20 premium over the Hanzo. It’s a great racer, nonetheless, so it’s a suitable alternative in case you want a high offset (10 mm) flat over the 4 mm Hanzo.

Saucony’s recently updated Type A9 is another sensible option which competes with the Hanzo. The Type A9 doesn’t have the aggressive outsole geometry of the Hanzo, but it is good value at a 20% cheaper price. The A9 weighs exactly the same as the Hanzo along with an identical 4 mm midsole offset.

There are other racers, but most of them are kinda-sorta. The Reebok Floatride Run Fast Pro is an excellent racer but its $250 retail price and cushier midsole puts it in a different segment than the Hanzo. The same goes for the $180 adidas Sub 2, which again, has a greater cushioning and dollar premium versus the Hanzo.

The $130 Brooks Hyperion packs lower value than the Hanzo, both in form and function. The 10 mm drop Nike Zoom Speed Rival 7 is great value at $80 but its distribution is scarce. Under the circumstances, the Nike Zoom Streak LT4 is your best bet.

The Wave Ekiden was an otherwise perfect competitor to the Hanzo, but Mizuno no longer makes it.

If it isn’t painfully obvious by now – great racing flats are hard to come by. Even the New Balance Hanzo S V2 isn’t available everyone so it’s a good idea to stock up while you can. 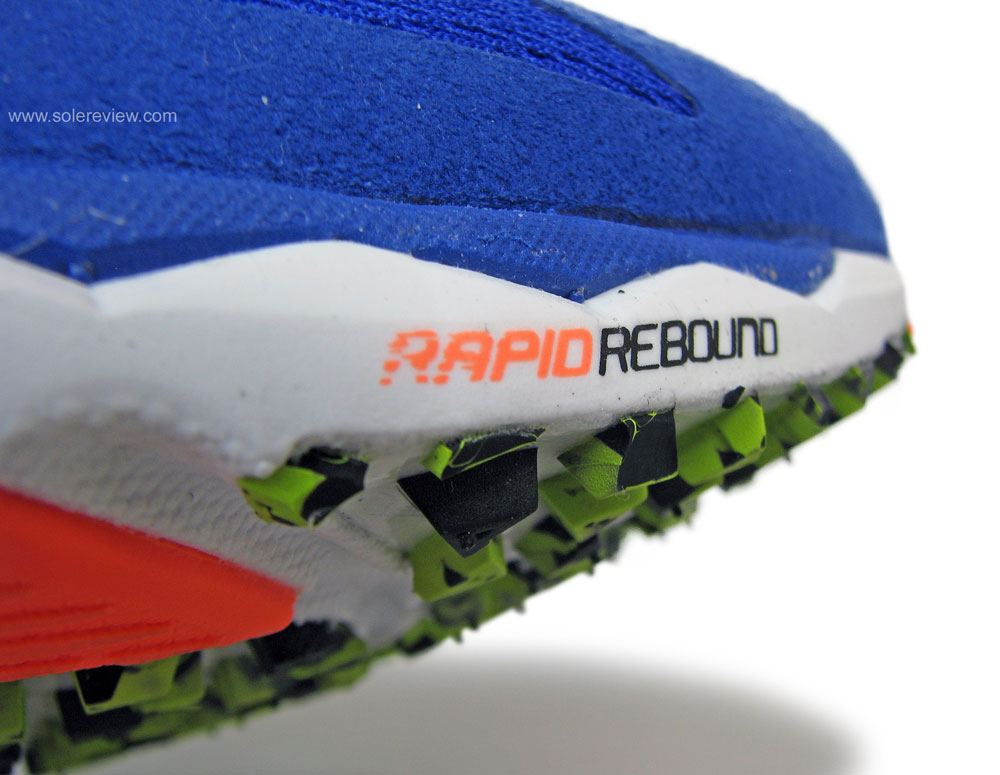 Racing flats are called thus because they deliver exactly that – a no-frills, flat ride quality without any gimmicks or distracting cushioning softness. The Hanzo’s midsole has the bare minimum of padding and little else.

And really, that’s all that you need for fast runs. 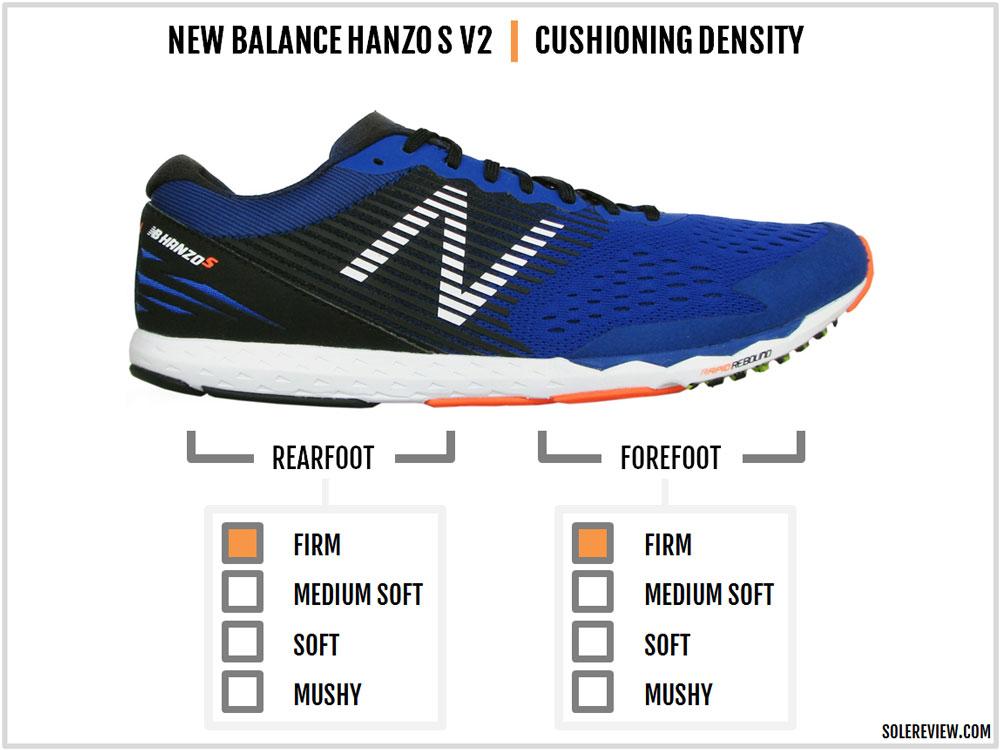 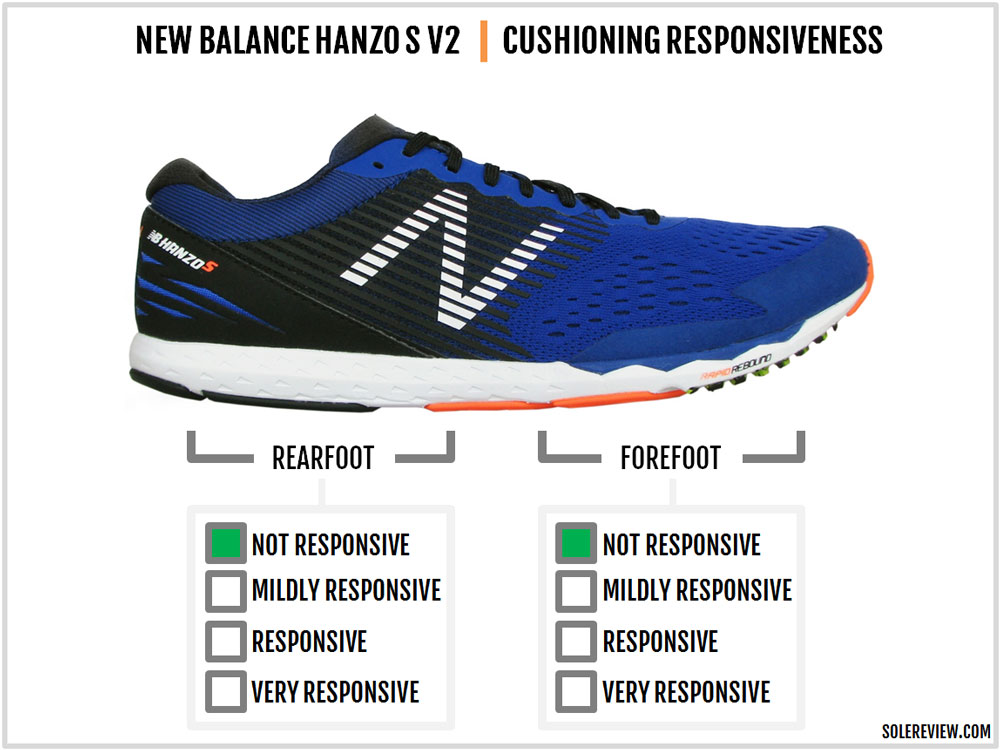 The cushioning – if you can even call it that – is derived from a single-density Revlite EVA midsole and the non-detachable insole which is pasted to the lasting. The heel to forefoot gradient is only 4 mm, which is as flat as it gets.

Here’s an interesting observation about the Hanzo’s heel drop. Though the specs state that the midsole has a 4mm offset, this road racer feels like a zero drop shoe. And here’s why we think this happens.

Unlike the forefoot where the colony of tacky lugs makes full-ground contact, the rear outsole is split into three pieces with exposed Revlite foam in the center.

Due to this design, there’s some splay happening when the rearfoot is loaded. Consequently, the foot sits slightly lower to the ground. Add to that the gentle heel bevel that the Hanzo’s midsole has, and you have a true racing flat. 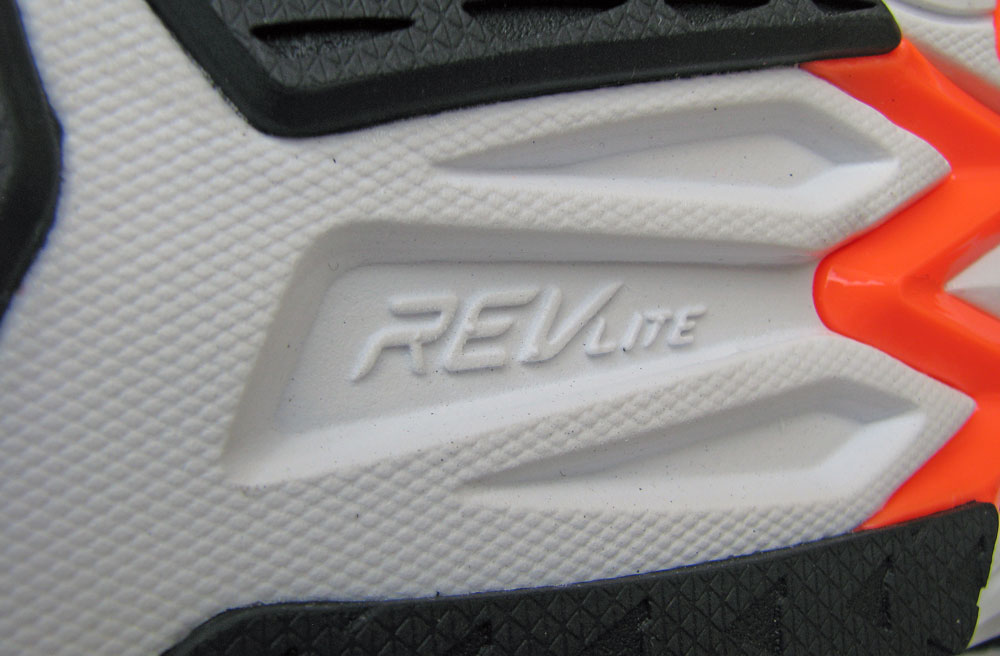 If you have been usually running in more cushioned and higher heel offset racers like the adidas adios or Nike Zoom Streak 7, then build up distance gradually instead of going all in. Else, you might be nursing sore calves or Achilles for the first few days.

And that’s why you should never accept the published heel-to-toe drop numbers at face value.

Despite the thin midsole, the Hanzo S V2 isn’t as punishing on the feet as one would imagine. As long as you keep the distance within 10 miles/15 km, that is. There used to be a time when one would put a shoe like the Hanzo through a fast half-marathon or longer, but nowadays you have ultra-cushioned racers spoiling you silly. 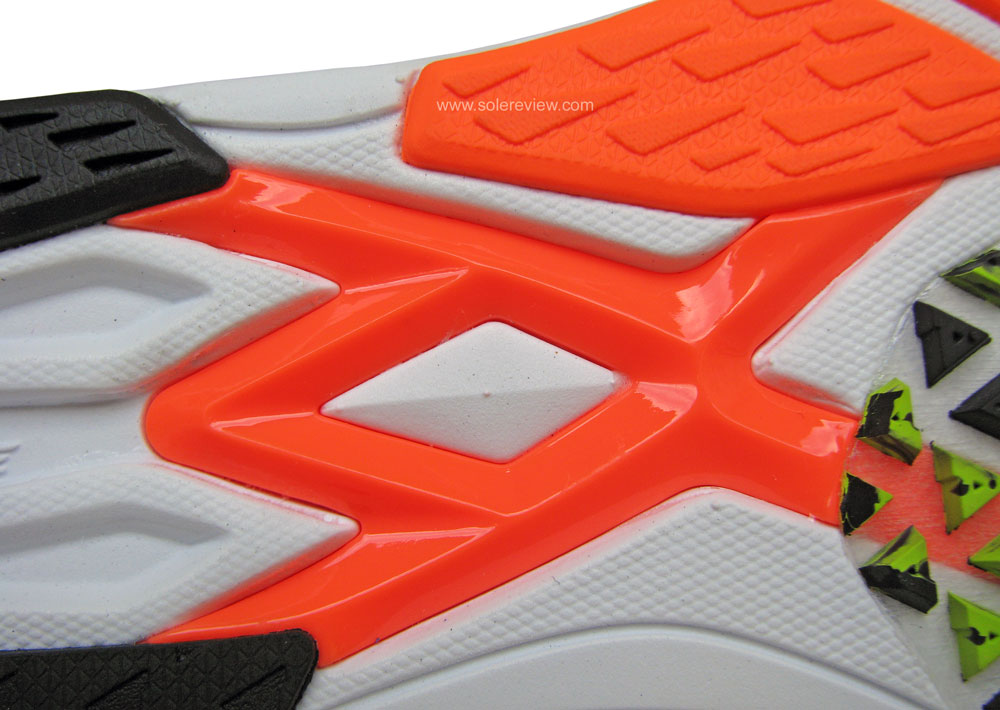 The Hanzo S V2, in our opinion, is perfect for 5K runs. The firm thinness and the midfoot rigidity – the midsole has a shank – are ideal for short-distance speed-work without the bone-jarring landings.

The transitions are swift without the compression slowness associated with softer shoes. 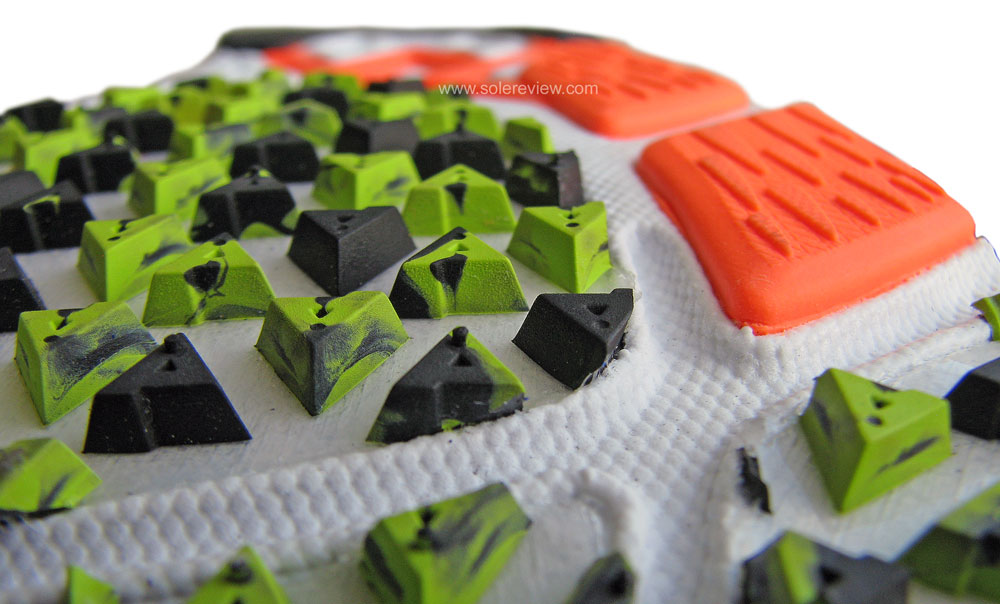 The ultra-grippy forefoot outsole (Dynaride) feels great underfoot and help with fast transitions. Although, they do not have a significant speed advantage over similarly designed rubber lugs (like the Saucony Type A9, for example) on road runs. But boy, do they feel great, and that’s a reason good enough.

Where the tacky outsole really shines is over synthetic tracks. The superior grip on the sharp bends of a short 200 m track can’t be mistaken for anything other than a DSP-type outsole. The small lugs bite hard into the synthetic surface for an extremely sticky grip. 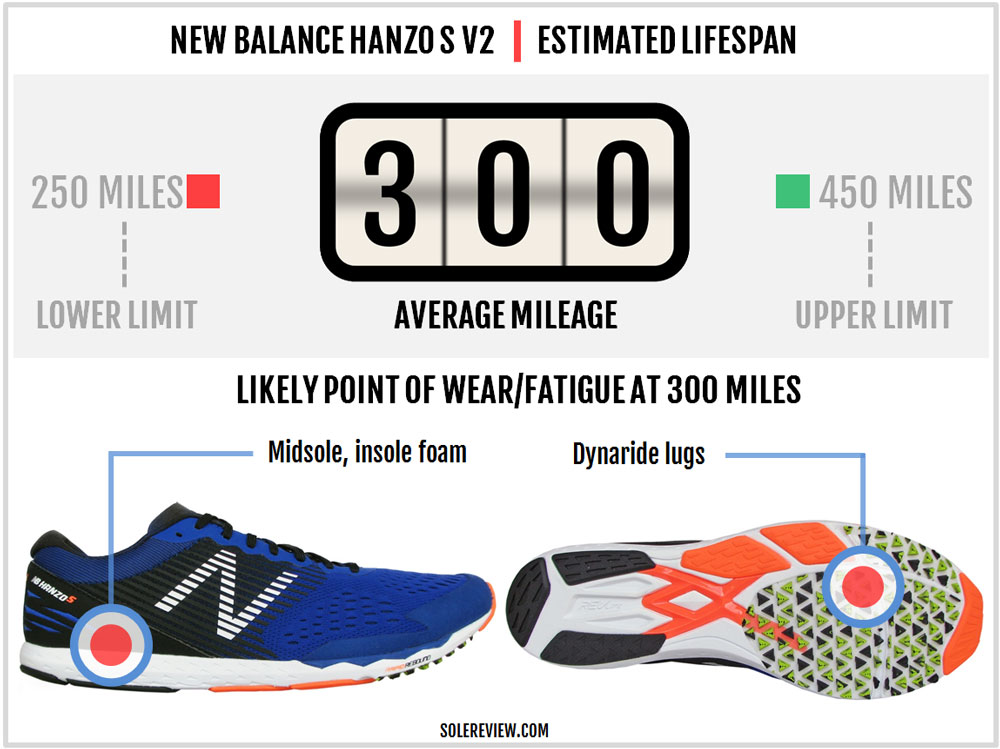 This is a racing flat we’re talking about, so its lifespan isn’t in the same league as heavier trainers with a full-contact outsole. Still, you should be able to extract 300 miles until the forefoot lugs wear down.

The Revlite cushioning is fairly flat to begin with, and it’s no loss even if it does compact over time; the Hanzo is a racing ‘flat’ after all. 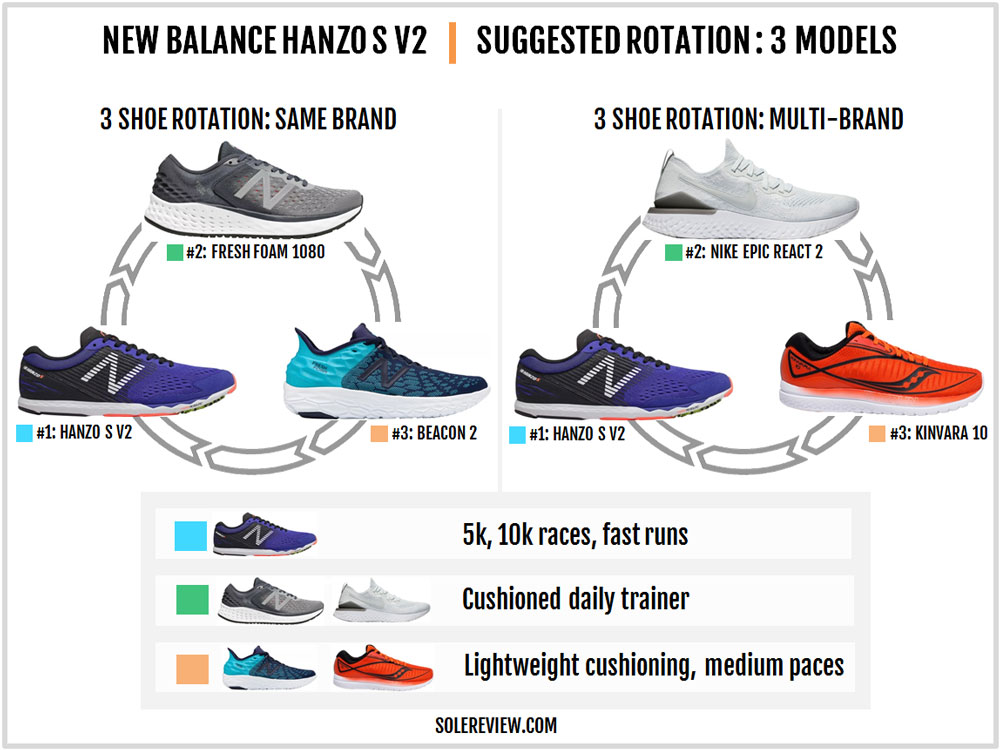 Having a rotation of running shoe is a necessity here – there’s only so much you can squeeze out of the speed-friendly Hanzo. For running longer in foam-supported comfort, get the cushioned New Balance 1080V9.

For something in between – say, running the weekly 15 miler but with a higher level of cushioning – the Fresh Foam Beacon V2 or the Fuel Cell Rebel are our top picks.

The Nike Epic React V2 and the Saucony Kinvara 10 are also great options. 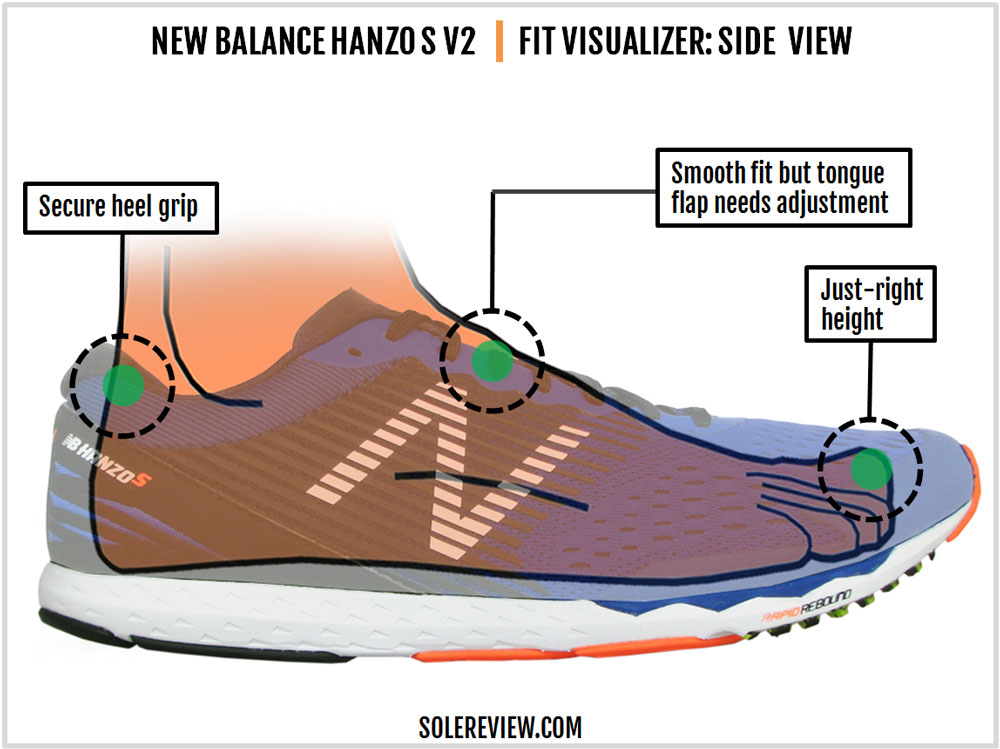 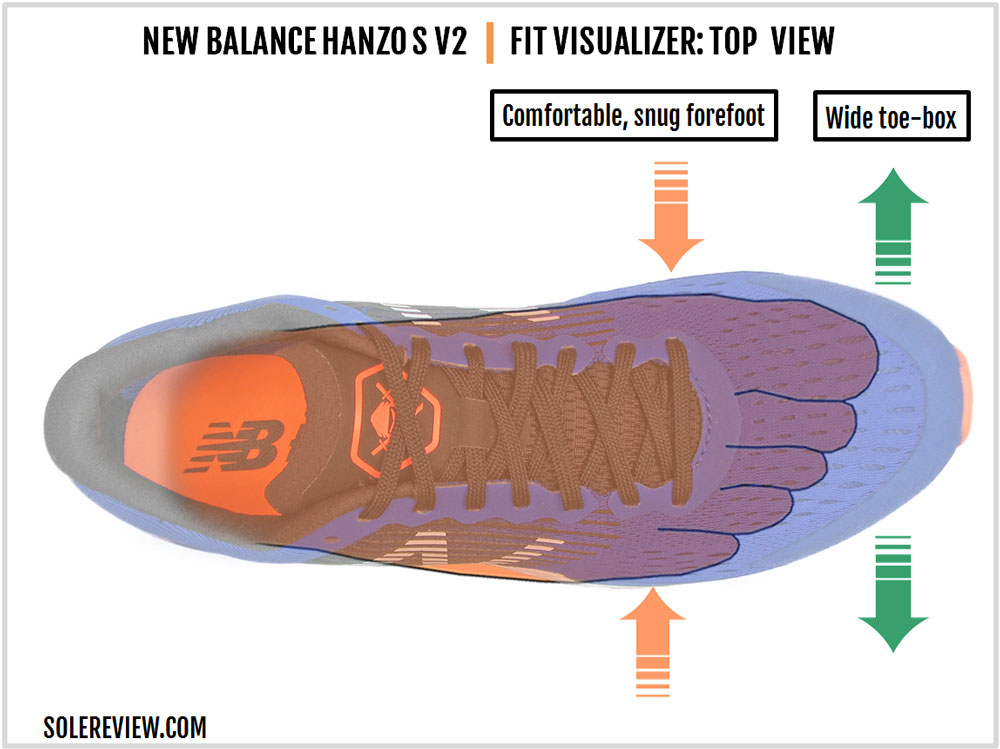 The Hanzo S V2’s upper is fairly forgiving for a racing flat. It is snug inside the forefoot but lacks the tendon-crushing narrowness which is usually associated with flats. The interior fits true to size; the toe-box is low-slung but isn’t what we would label as shallow.

The relatively easygoing feel is also helped by the engineered mesh’s built-in mechanical stretch. We’d even go as far to say that the Hanzo is a comfortable road racer; there are very few shoes of this class to feature a spongy spacer mesh. 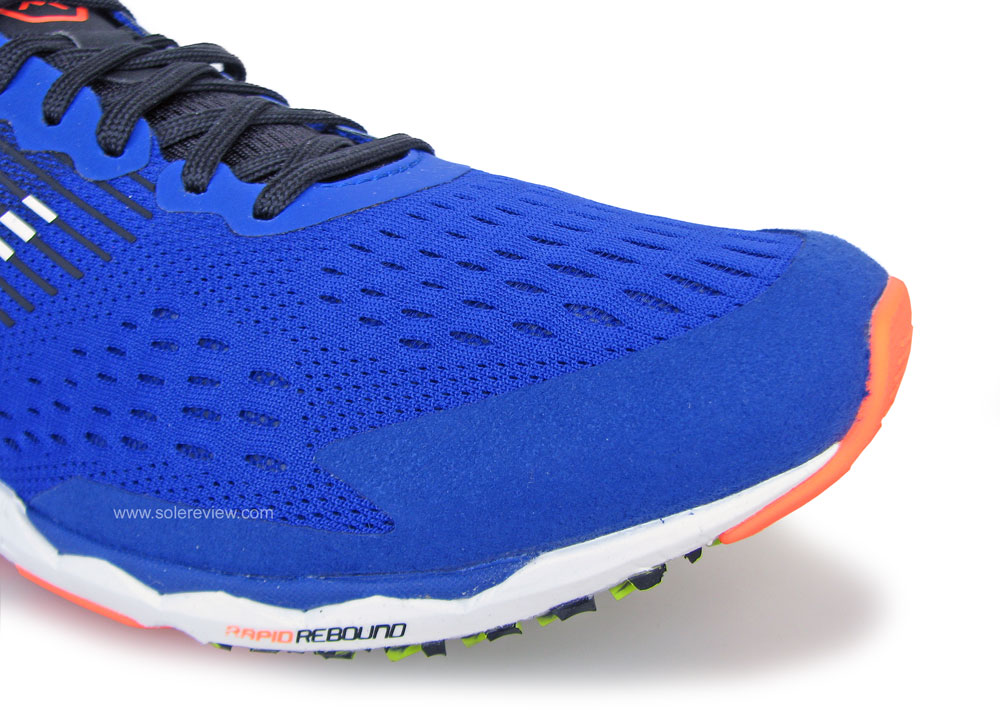 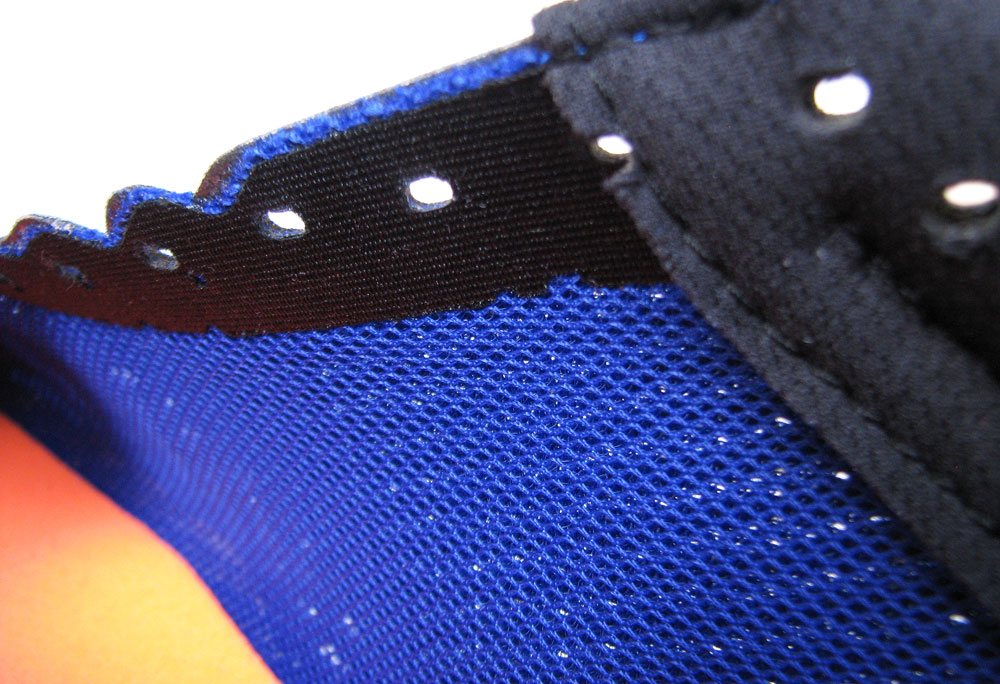 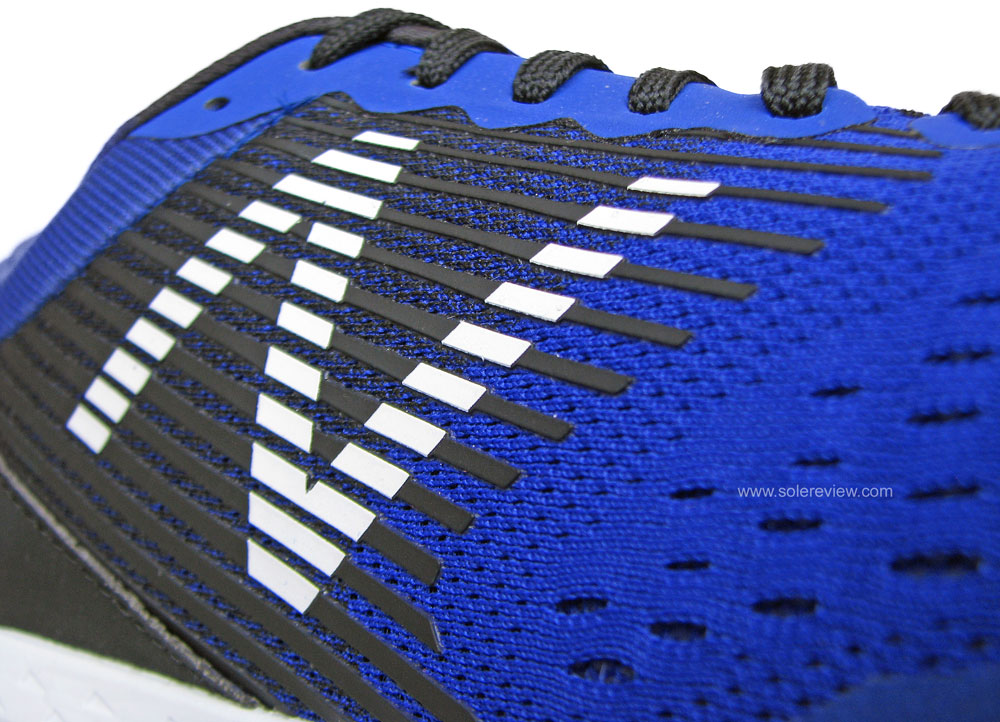 Even the toe-bumper and forefoot overlays are made of pliable synthetic suede. Unlike the Hanzo V1, most of the V2’s upper is made of a single mesh which results in a smoother fit.

The V2’s overall fit is a definite improvement over the V1. 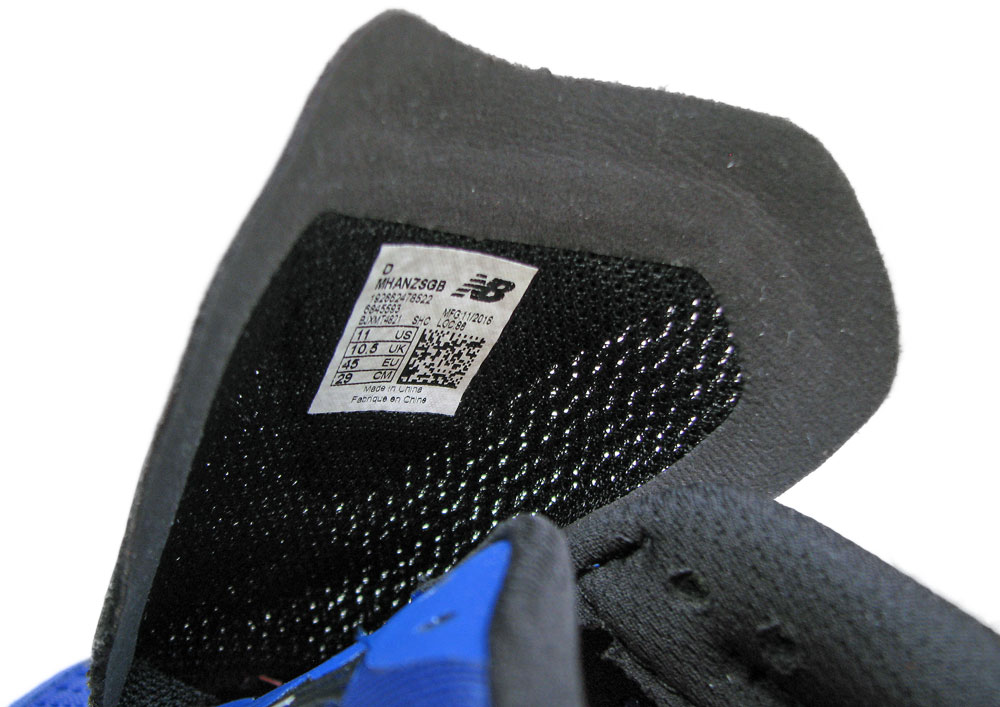 The consistent design means that there are no hot spots – unless you tuck the tongue in incorrectly, that is. The broad tongue sits flush over the foot but its thin edges tend to fold over during the lacing process. However, once set properly, it isn’t a problem during runs.

There’s no quilting inside the tongue but the lacing cinch is distributed evenly without creating pressure spots.

The Hanzo has a high lacing density; no less than seven main lacing rows (plus the last heel lock eyelet) over the tongue. The tongue has a synthetic Nubuck flap which prevents the laces from pressing into the foot.

Keep in mind that if you do not utilize the last row of heel-lock lacing, the laces end up longer than required. You need to tie large loops to prevent the aglets from getting trampled over.

It’s worth noting that the Hanzo S V2 uses similar flap edge materials as the Vomero 14 but doesn’t press into the foot during runs.

The tongue length is just right, which means that the flap rests over the foot as opposed to digging into the skin. The synthetic Nubuck overlay on the tongue flap also has a scooped shape for added softness. 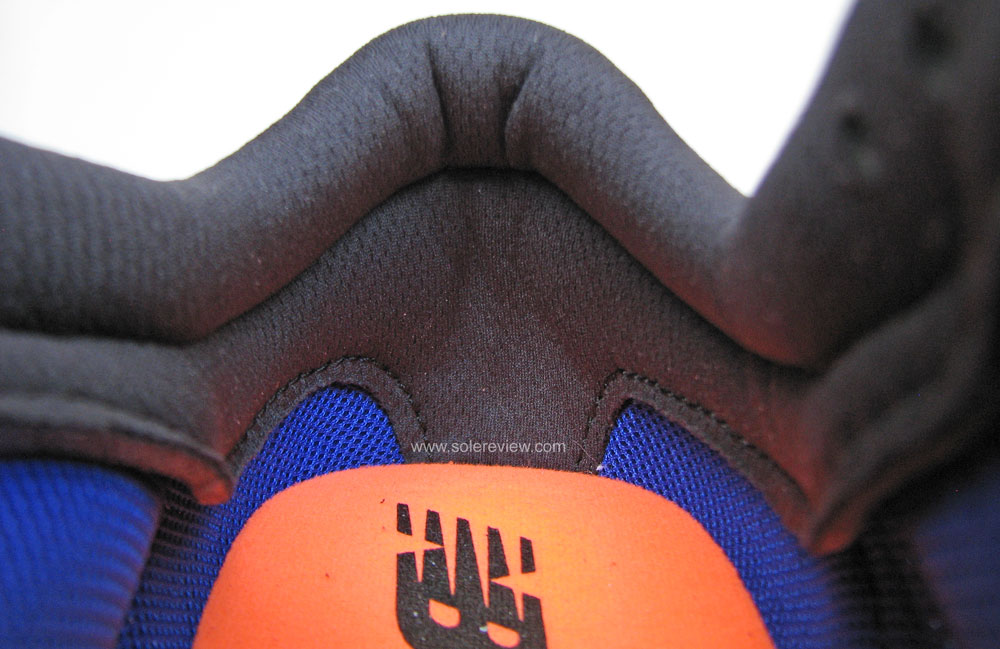 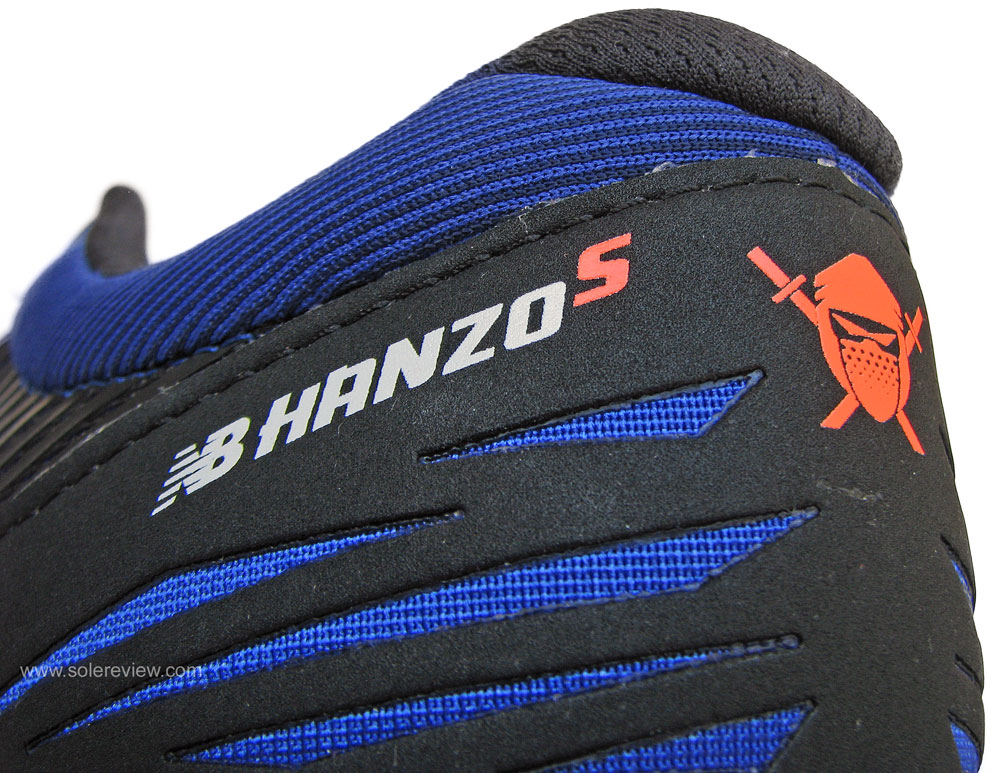 For a racing flat, the heel fit is very comfortable. Usually, shoes in this class have a deconstructed collar set-up. While the Hanzo doesn’t a lot of heel plushness, the Hanzo’s fit and feel is somewhat similar to the Zante.

And if you’ve been wondering what Hanzo means, it refers to Hattori Hanzo, a sixteenth-century Japanese Samurai. Folklore and popular culture (as in the anime ‘Ninja Hattori-Kun’) have deified him as a Ninja instead, and New Balance does too.

Thus, the masked Ninja graphic over the heel. 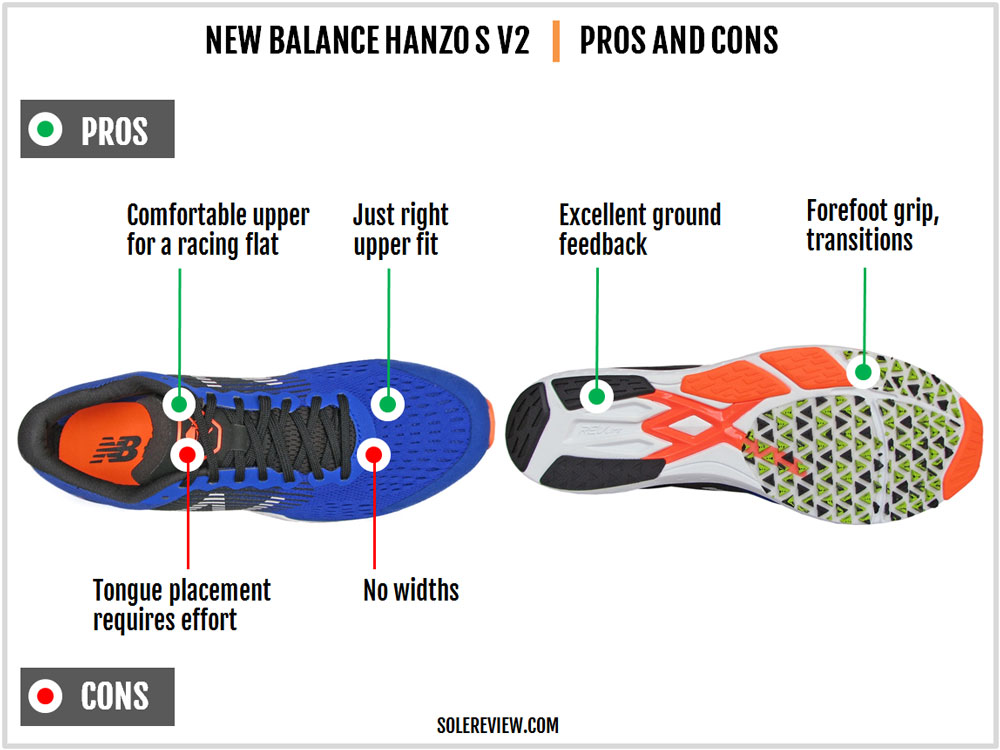 As a racing flat, the Hanzo S V2 nails it. The upper is smooth and comfortable with just the right amount of space. The engineered spacer mesh is one of the best we’ve seen, as it combines inherent sponginess, ventilation, and structural support. $120 isn’t exactly cheap, but if you consider the competition, the New Balance Hanzo S V2 is reasonably priced.

The midsole doesn’t seem like much from the outside but it is feature-rich. The plastic shank adds midfoot rigidity for quicker turnover and the aggressive forefoot outsole is perfect for touch and go. Its 6-ounce build means that you’re carrying very little weight during runs.

Working the tongue in during lacing takes some effort, plus the laces are longer than necessary – but we’re being petty here.