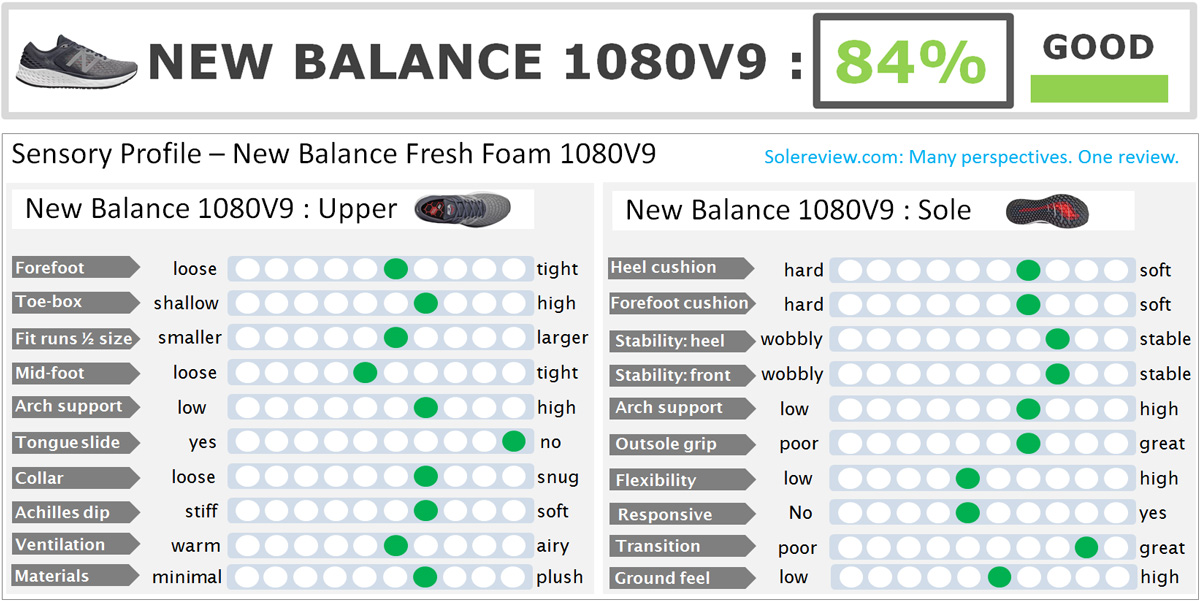 The 1080V9 finally lives up to its Fresh Foam name. New Balance's cushioned trainer is updated with a soft midsole and a comfortable upper, thus creating the most comfortable Fresh Foam based 1080 to date.
Super cushioned and supportive ride, outsole grip, lightweight, optional widths, reflectivity
Could have been lighter, the heel fit isn't great 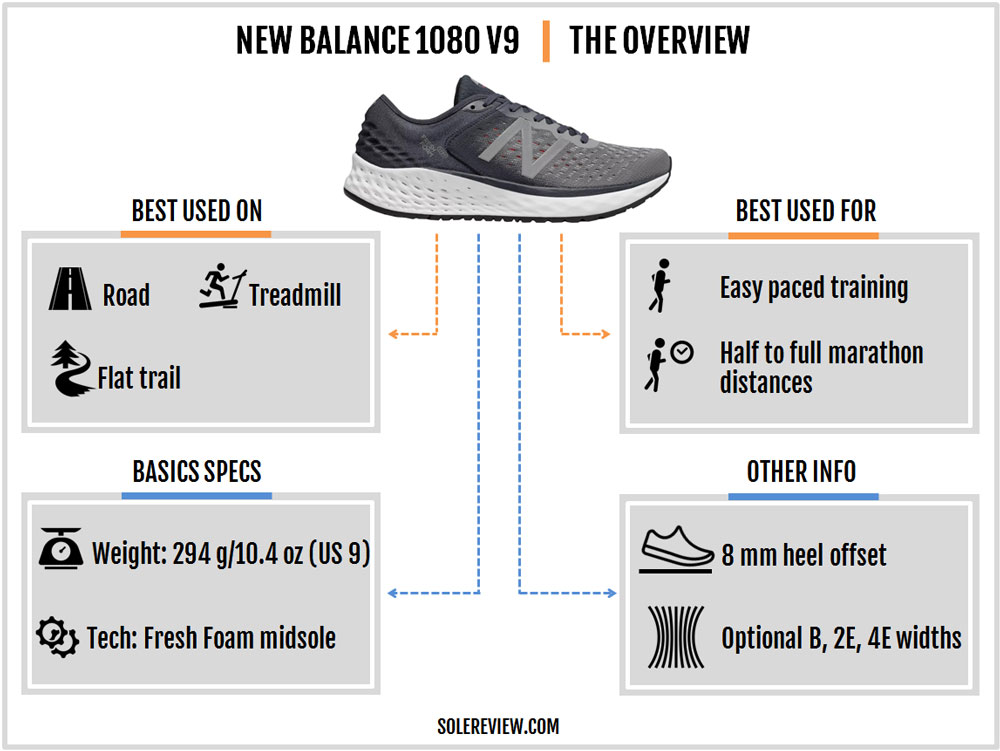 We’ll be straight with you – solereview wasn’t a fan of the 1080 once it switched to the Fresh Foam midsole. The midsole made of the namesake foam felt clunky and bland on versions 6 to 8.

The ride had plenty of cushioning for the long miles but the overall experience was underwhelming – especially when one compared the 1080 to other shoes made with new-age foam materials.

Fresh Foam has also been very inconsistent in feel. There have been occasional flashes of brilliance, as seen on the original Zante and the Beacon. But most of the line-up felt ordinary, with the original Fresh Foam shoe setting a less-than-ideal precedent to follow.

But the same inconsistency which had resulted in a sea of Fresh Foam sameness has also produced the gem that is the 1080V9.

New Balance runs this premium neutral trainer through a full update cycle, and the result is a 1080 which is far superior to any of its previous Fresh Foam versions. There are so many improvements to the new 1080.

The Fresh Foam midsole is soft – as it should be. The upper loses its overlays and introduces a new upper design with a smoother fit. The outsole gets a slew of tweaks and compliments the softer midsole while adding a bit of forefoot snap. To top everything off, the new model is more than a half-ounce lighter.

After several years, New Balance is finally breaking out of a rut. We loved what the New Balance did with the Beacon, Zante Pursuit, the Summit Unknown, and the Hanzo.

Add the 1080V9 to that list. It is a definitive update, so if you were put off by the clunkier ride of earlier editions, 2019 is the right year to buy the 1080. The heel fit isn’t perfect by any means but isn’t a deal-breaker either.

Outward appearances do not reveal the sweeping functional changes in the ride character.

The 1080V9’s midsole is still made of single-density Fresh Foam with an 8 mm offset – specs which resemble that of the V8. The midsole is layered with a blown-foam Ortholite insole and a foam lasting, a configuration which has been standard fare for the past few years.

Under the midsole is a full-coverage outsole in a dual-density set-up. The rearfoot has a crash pad made of a harder rubber; the rest of the outsole is constructed using softer blown rubber.

New Balance does a reverse Zante on the 1080. You remember how the Zante V1’s midsole felt so good while the successive versions gasped and spluttered trying to match the original ride quality? Not this time. 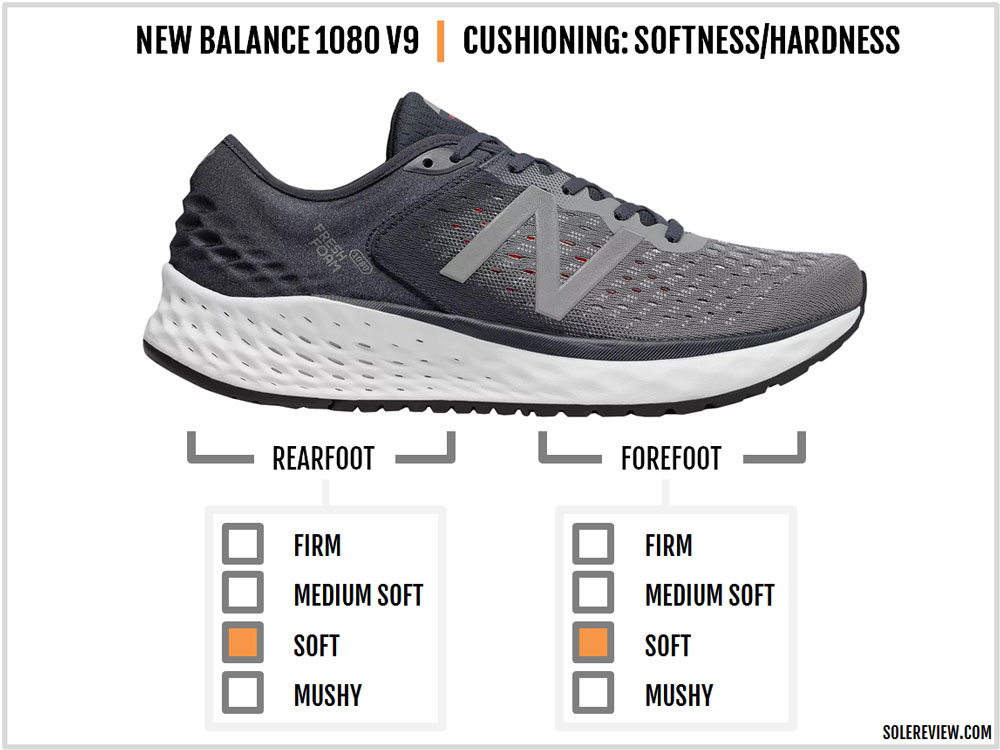 The bland midsole of the V6, V7, and the V8 has transformed into the lively softness that is the 1080V9’s midsole. There are only a few instances when the Fresh Foam has actually lived up to its marketing, and the 1080V9 happens to be that rarity.

We’re not sure what New Balance has done with the foam, but this story has a pleasant ending. The new midsole is soft without being gooey, and there’s a lot more life inside the thick foam stack.

Prima facie, the midsole seems to be molded with more air injected into it. This theory is also supported by the V9’s lightness; the 2019 model sheds more than half an ounce (20 grams) over the V8. That is a lot of difference and cannot be explained by just the redesigned upper.

The V9’s Fresh Foam midsole also has more volume. The forefoot base flares wider than the V8 and the sidewalls are plumper through the midfoot to the rearfoot. So there’s more foam under the foot – something which enhances the sensation of cushioning and stability.

New Balance sticks to the same sidewall formula and makes the inner midsole more supportive than the outer side. The medial face gets a filled-up treatment while the lateral sidewalls have laser-cut compression grooves. Given the softness, the V9 is a mite less stable and has more bias than the V8; but everything is within acceptable limits.

The new changes on the outsole do a better job at working together with the midsole. The edge-to-edge flex grooves of the V8 are replaced by slits cut on the forefoot. 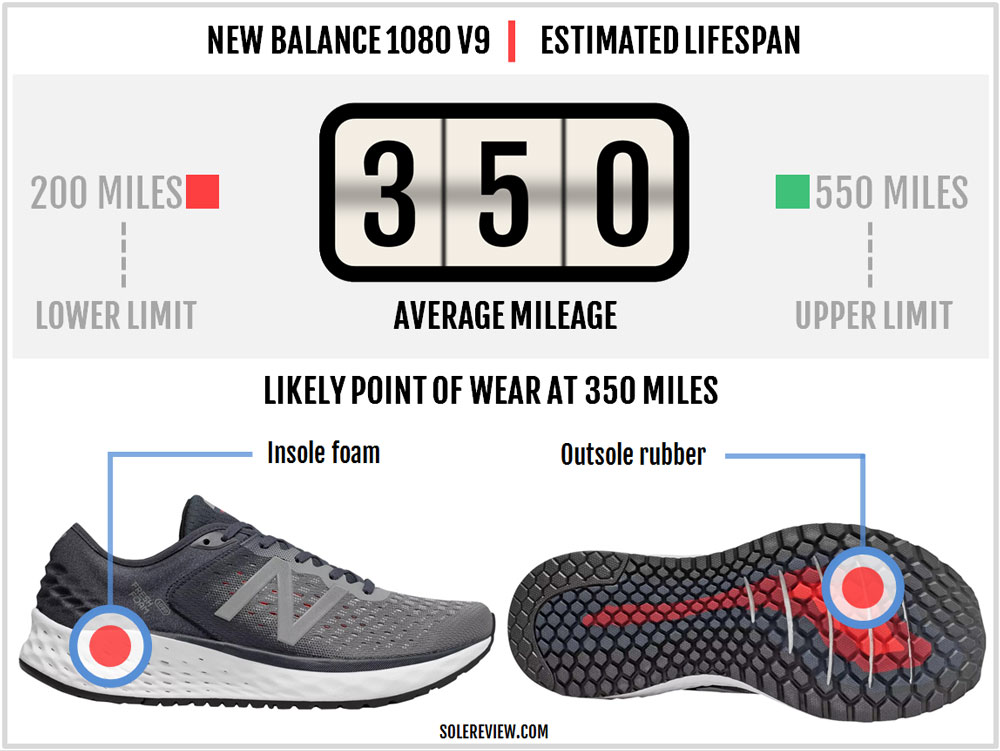 The size of the hexagonal lugs are smaller and have a denser packing. The harder heel crash pad is no longer separated by a wide channel. As a result, the loading experience is smoother. A larger number of smaller lugs helps spread the weight better while providing plenty of great traction over the road. The full outsole also protects the midsole and helps increase the 1080’s lifespan.

Flexible isn’t the term one would use to describe the 1080. Its forefoot has always been resistant to bending, and that doesn’t change on the V9.

That being said, the forefoot feels snappier. The partial flex grooves allow just the right amount of movement during transitions and then compels the outsole to snap back to its original shape.

With these changes, the 1080V9 turns into a credible long-distance runner and a shoe which you can wear as a daily trainer. While the softer ride isn’t of a lazy, sink-in kind, the V9 isn’t a very fast shoe for runs of shorter distances. 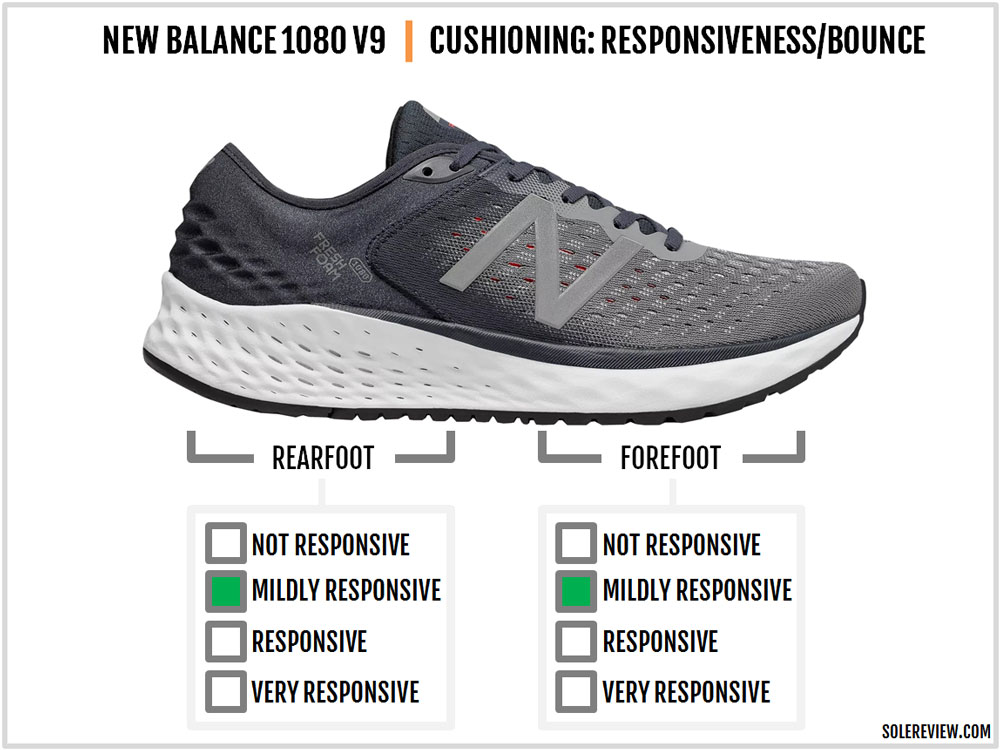 The ride is more responsive than before. As we said, there’s a lot more life in the 1080’s ride due to the revised foam formula.

The responsiveness isn’t of a Pebax, E-TPU, or synthetic rubber kind, but you do get a spring-back sensation which was previously missing. 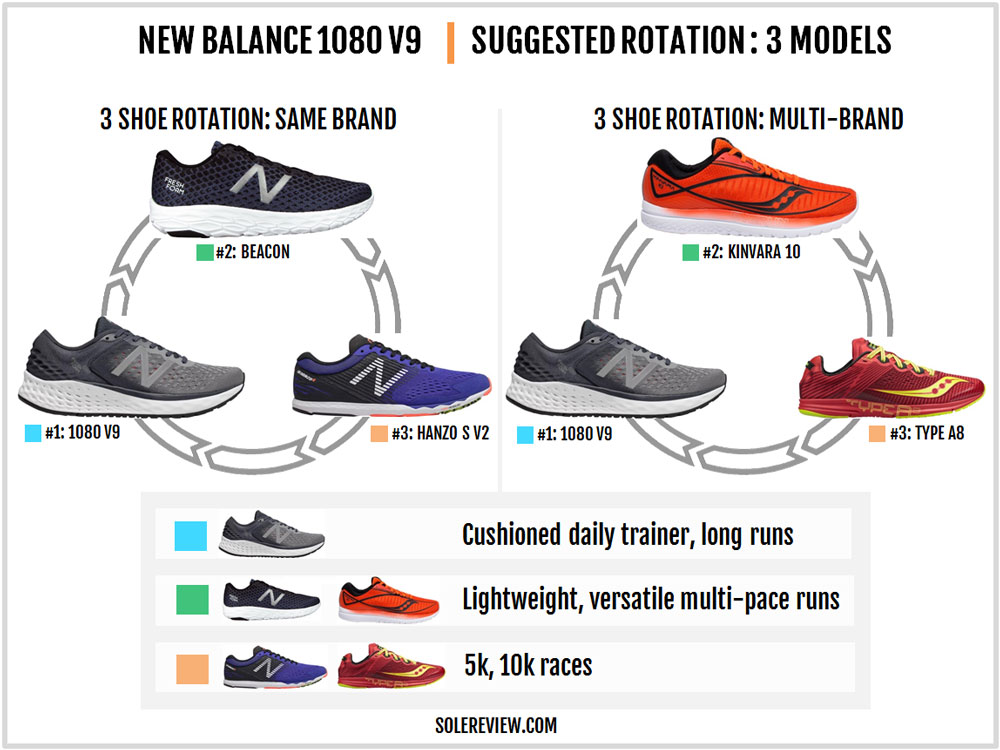 For faster days, the New Balance Pursuit does the trick. The Beacon is also a cushioned and lightweight option. And if you’re planning to go the racing-flat way, the Hanzo gets the job done, and then some.

The Saucony Kinvara 10 and Type A8 are also great as light-shoe and race-shoe respectively, but the New Balance Pursuit and Hanzo are superior rotational choices.

And what if you want the Fresh Foam More seems to be the answer. But we don’t think there’s any merit in buying the platform shoe over the 1080. The V9 has all the cushioning you want (and need) and isn’t as stiff as the More.

The New Balance 880V9 is the lower-priced neutral option. But regardless of the 880’s (neutral cushioned) classification, the 880 and 1080 aren’t merely price options. Both the shoes differ so much that one needs to treat them as options from separate categories.

One of the two things which set the 1080V9’s fit apart from the V8 is the redesigned heel.

The V9’s no longer has the foam-filled heel lining. In its place, New Balance uses a molded design which is inspired by UnderArmour. We’ve reviewed a couple of models on solereview with that kind of heel design – the UnderArmour Speedform Gemini and the Apollo.

However, there is one crucial difference between the New Balance and UnderArmour designs. The 1080V9 lacks the plastic heel clip and relies on an internal heel counter instead. 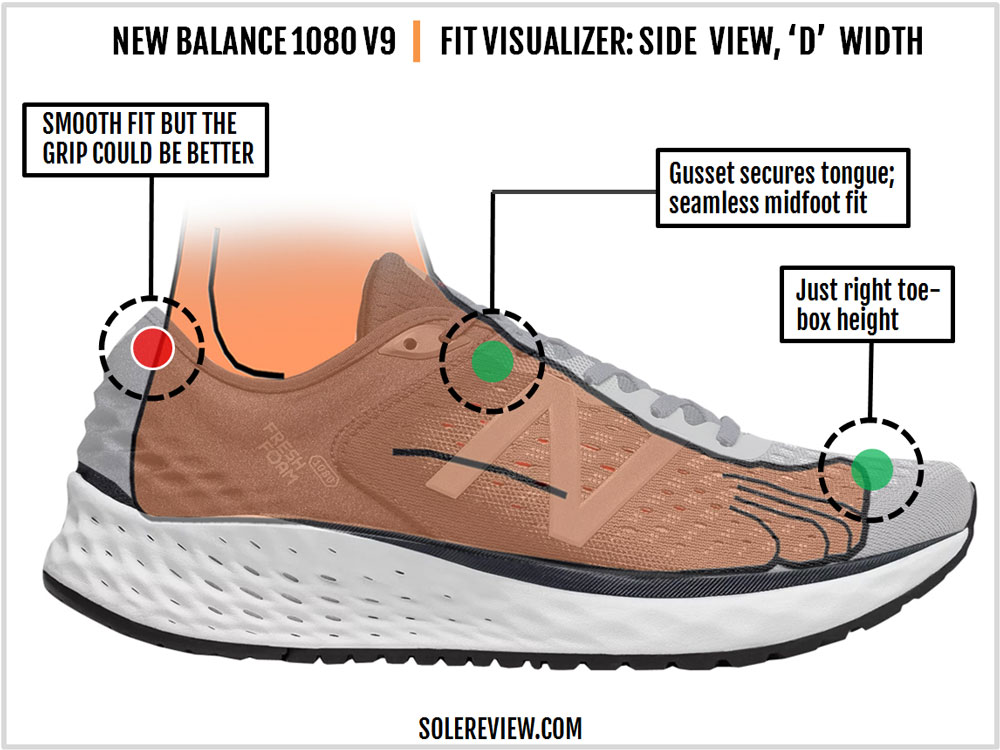 The grip is ok at best. The lining is very smooth and allows the foot to sit flush with the upper. This increases the amount of toe-box room as compared to the V8.

The Achilles dip has an inwards curve for grip. Despite that, the lock-down isn’t great – not even with the heel-lock lacing activated. It doesn’t help that the heel is not as deep.

Other updates are excellent. The exterior loses the welded toe-bumper and the midfoot panels of the previous model. The padded tongue is connected to a full-sleeve which covers the foot all the way to the toe-box. The new semi-elastic laces are a thoughtful touch. 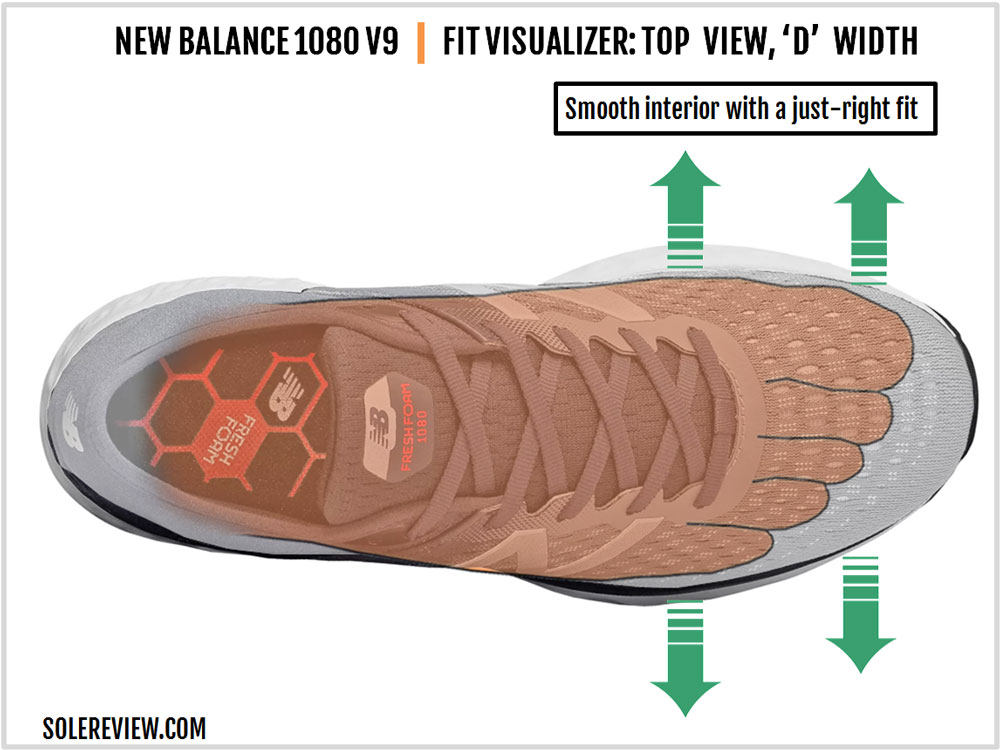 The interior is extremely smooth, and without the minor hot-spot created by the V8’s midfoot panels. The sleeve makes the fit snug but feels just right for a D width. The V9 trades the external toe-bumper for an internal one so the front has a pointier profile. And just in case, there are three more optional widths if the space feels lacking.

Reflectivity is available in the form of midfoot logos. 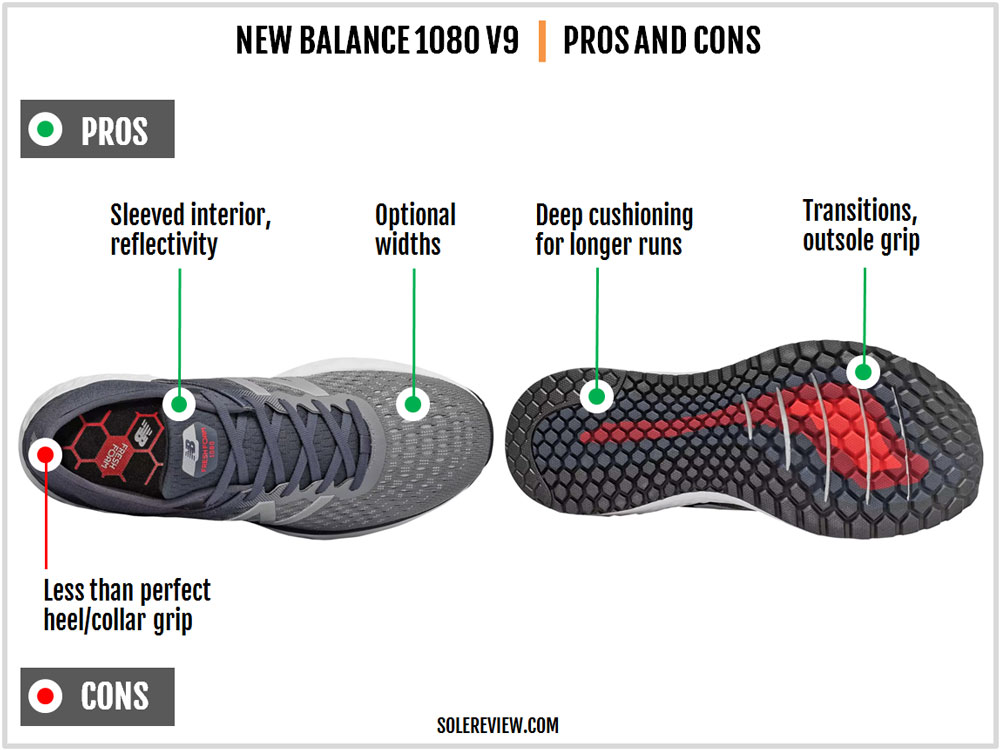 The 1080V9 makes a strong case for itself as a cushioned daily trainer with a soft, comfortable ride. The updates made to the Fresh Foam material makes the V9 a much improved 1080, one with more life in its ride.

The wider and higher-volume midsole produces an improved blend of cushioning softness and forefoot stability. The full-coverage outsole has great traction and smooth transitions; the much lighter V9 is more enjoyable to run in.

While the upper has its strengths – such as the smooth interiors with optional widths and loads of reflectivity – the new UA Speedform inspired heel design is a work in progress. 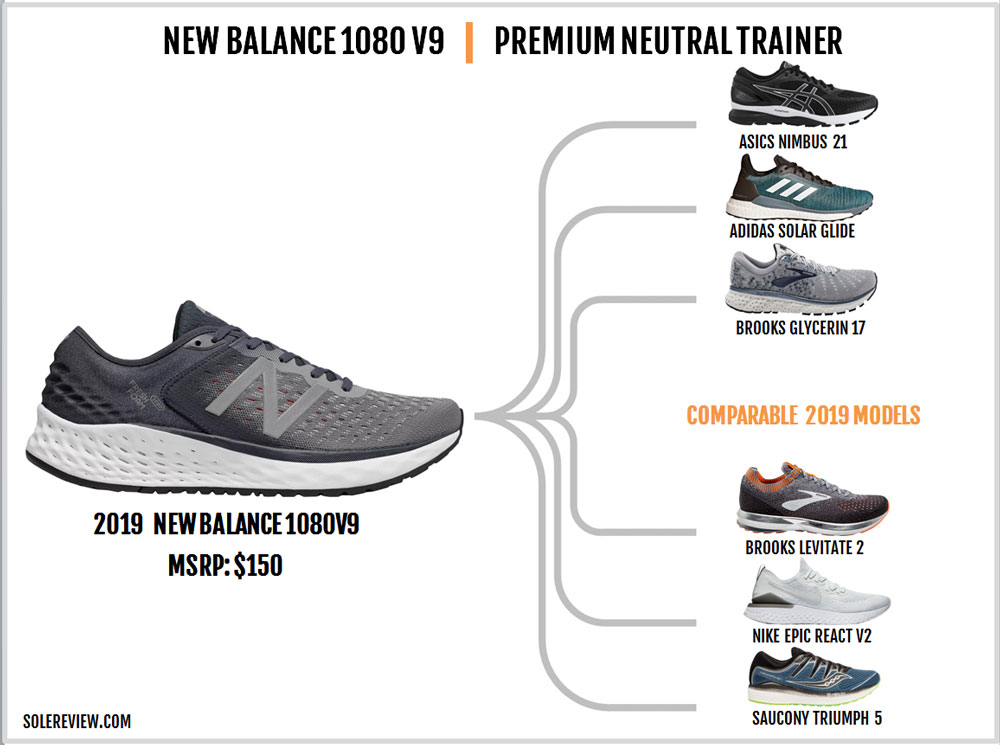 With a refreshed ride, the New Balance 1080V9 holds its own against other premium neutral trainers – regardless of their non-EVA midsoles. Obviously, the Fresh Foam midsole doesn’t have the springiness of the adidas UltraBoost 19, the Solar Glide, or the lightweight build of the Nike Epic React 2.

At the same time, the V9’s soft ride is more comfortable than the Brooks Levitate 2 with its DNA AMP midsole – or for that matter, the clunky Nimbus 21.

The Saucony Triumph ISO 5 offers a firmer and denser ride through its Everun midsole. The Brooks Glycerin 17 packs plenty of softness into its upper over a smooth and supportive midsole – it’s not as softly cushioned as the 1080 though.