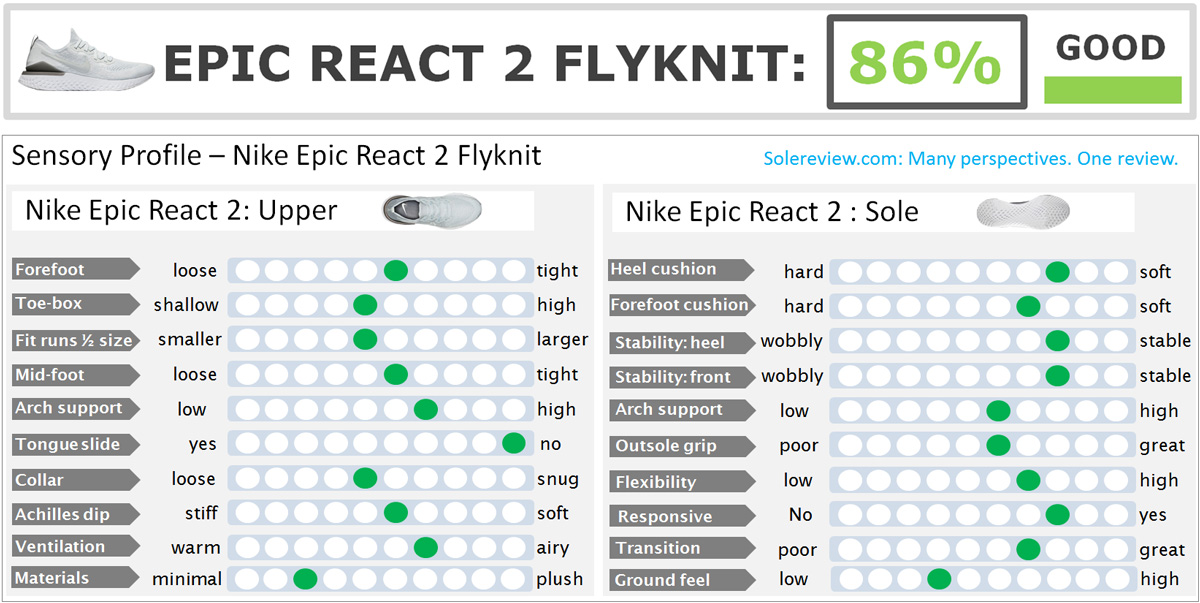 Nike’s marketing pitch: For comfort that lasts as long as you can run. 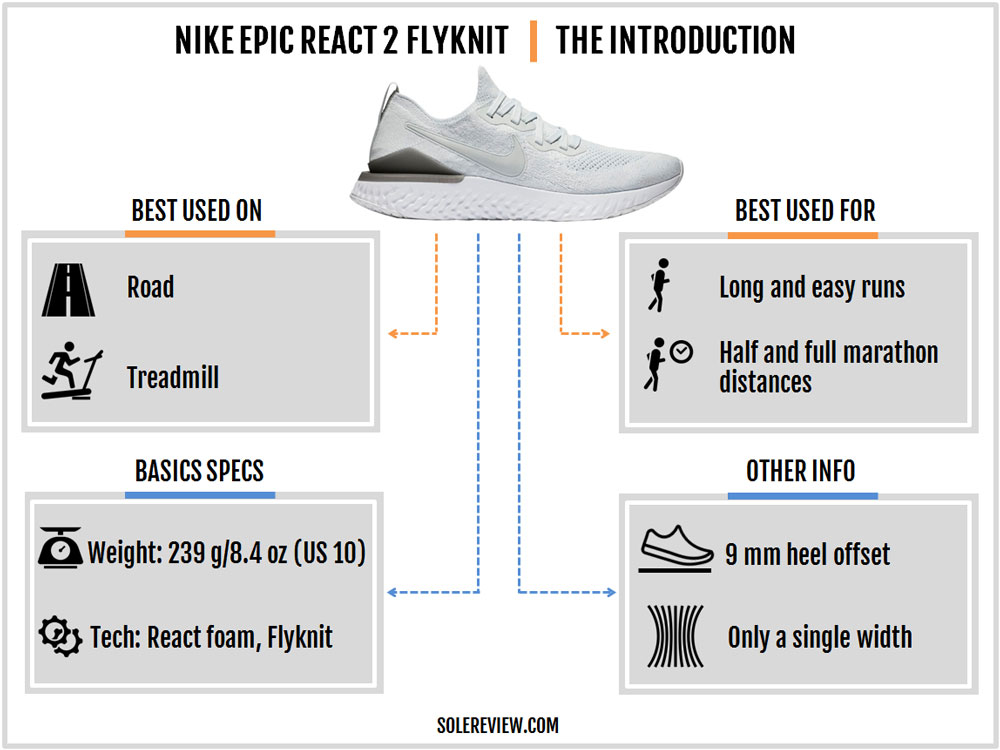 If you’re reading this, then we assume that you’ve read our detailed review of the first Epic React. If that’s the case, we’ll save you the trouble of reading the entire piece today.

The ride of the Epic React V2 is identical to the V1, except for one slight difference. The V2’s upper has a new heel truss which now connects to the plastic stabilizer over the midsole. With this change, the ride stability sees a marginal improvement.

Most of the small tweaks are applied to the V2’s Flyknit upper. While the V2 has a similar design with elastic knit, the upper has an easier fit due to the softer heel. The updated heel design also makes the inward looping strap a non-issue.

Other minor updates include the embroidered Swoosh logo and a small change in the lacing eyestay design.

That’s it, folks. If you already have a pair of the Epic React V1, here is pretty much everything you need to know about the V2.

On the other hand, if you’ve been living under a rock and have no idea of what we just said, read on.

The first edition of the Epic React impressed us with its lightweight, durable, and responsive cushioning. While there were a few shortcomings – such as the foam firming up in freezing temps and the subsequent loss in grip – the Epic React proved to be a versatile running shoe capable of wearing many hats.

What’s fascinating about shoes like the Epic React and Pegasus Turbo are their incredible cushioning-to-weight ratios. Some of the other cushioned shoes in the market like the adidas UltraBoost 19 and Brooks Levitate provide high-volume cushioning but at the cost of higher weight.

The Epic React weighs just 8.4 ounces for a half pair of US size 10. That’s at least 2-ounces lower than competing shoes using PU-based foams. In the running shoe industry, a 2-ounce gap is an equivalent of being 2 light years away.

Of course, there’s a catch – certain design choices help shave off the bulk. The outsole barely uses rubber, and the upper is practically a piece of thick cloth. Nike could have made it lighter by further cutting down the outsole rubber.

The pieces are not even in high-wear areas. If we didn’t know any better, we’d have thought that Nike was trolling people with that outsole design. Not that reducing outsole rubber will affect durability. The React foam manages most of the transition and grip workload and has proven durable so far. 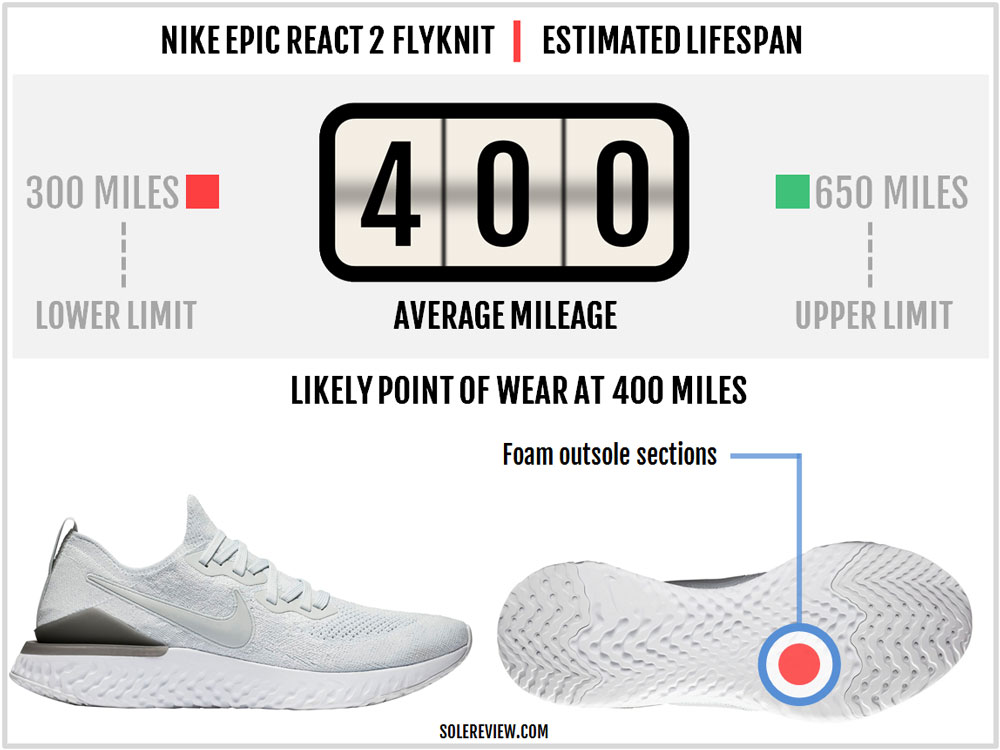 The React foam is very durable, both from a cushioning longevity and outsole wear standpoint. There were some initial concerns about fast wear, but most of it was related to the ‘pre-worn’ smooth areas under the heel and forefoot.

Traction is average. The Epic React’s foam sections grip well during summers but don’t do well in lower temperatures once it firms up. If you’re planning to run in freezing temps, you’re better off in running shoes with rubber-clad outsoles. 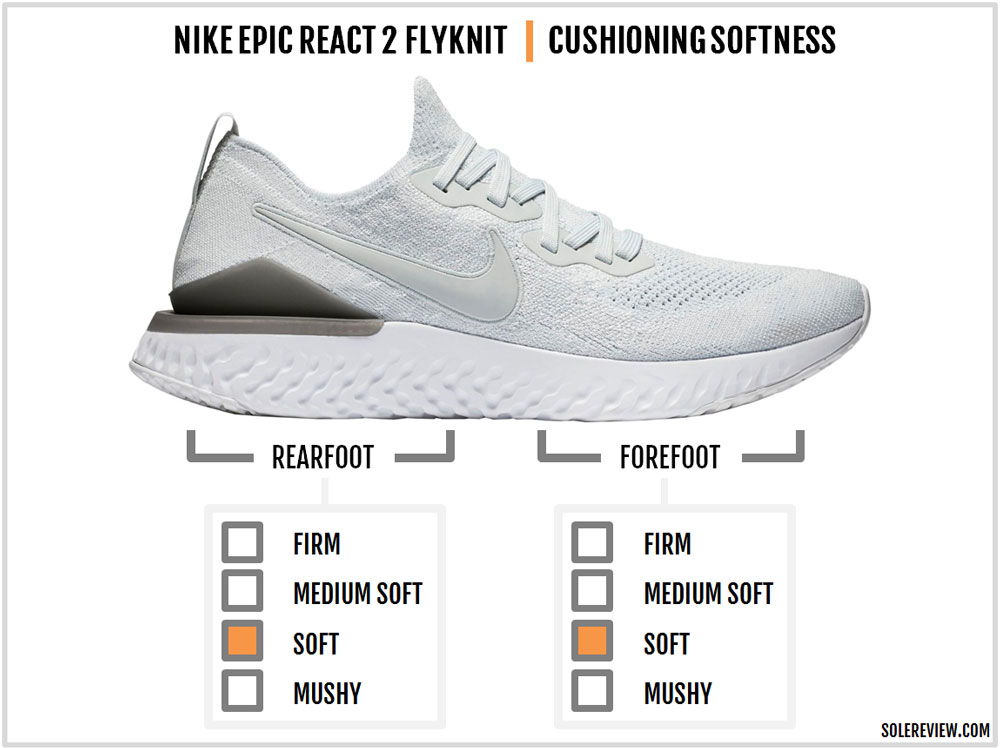 The cushioning softness is best experienced in temperatures above 0° C/32° F. Running on the single-density React midsole is a deeply cushioned experience but without the gooey softness.

It doesn’t matter how you land; the React midsole has a very even cushioning spread. The outsole has a ground contact geometry between the toe and heel spring. So landing forefoot/midfoot gives you the midsole’s sweet spot.

The transitions from rearfoot landings are managed by the heel bevel which eases the footstrike in. The smoothness is also helped by the fact that most of the contact areas are not outsole rubber but React foam. A thin insole and lasting allow the foot easier access to the React foam underneath.

In other words, the React midsole has a pure cushioning experience without the deceptive layering often found in running shoes. As highlighted earlier, the rearfoot stability has improved over the V1. The heel clip on the upper is now a part of the midsole stabilizer and reduces the roll during landing.

Stability was already good on the Epic React due to the flared midsole and heel, so the updated stabilizer is a welcome addition. 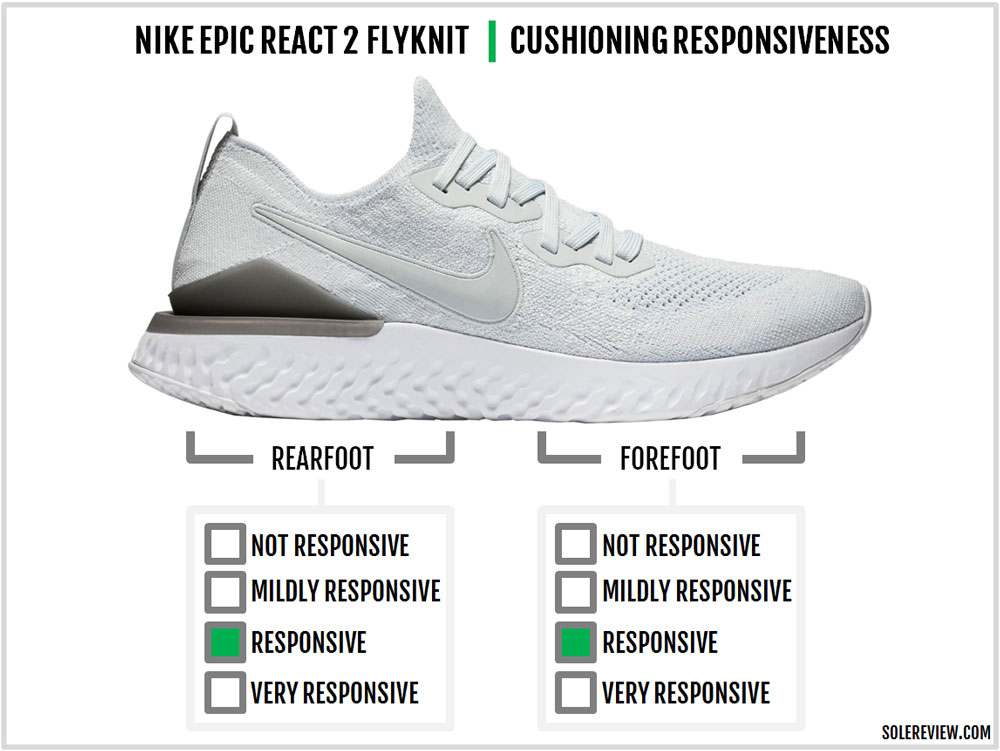 Though the React isn’t as bouncy as Nike’s Zoom X foam, it is responsive. The dense cushioning has great feedback – in a rubbery kind of way. And it makes perfect sense – the React foam is made of a synthetic rubber blend.

The non-mushy cushioning is good for a lot of runs; it particularly excels on the long and easy kind. The lightweight build doesn’t feel like you’re hauling a lot on your feet. Furthermore, the deep cushioning makes the going comfortable during long-distance runs.

We also recommend the Epic React as a cushioned running shoe for heavier runners. Read this guide if this recommendation relates to your needs. 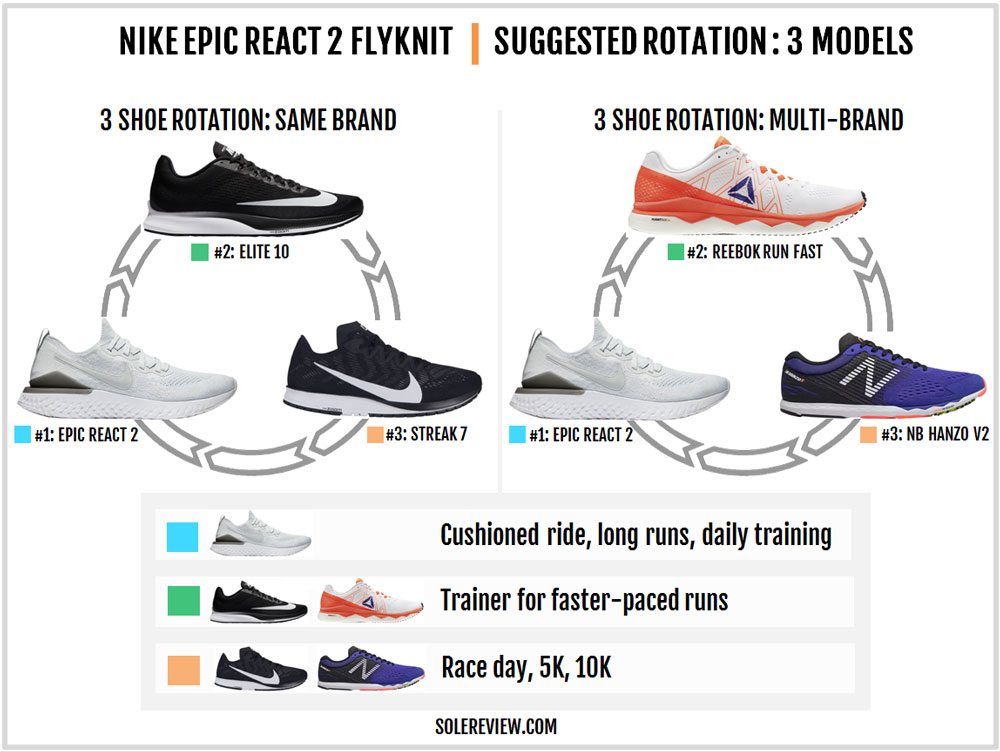 The React isn’t a speed shoe. The firm Nike Zoom Elite 10 is better suited for those type of runs. The Streak 7 is a lighter fast-shoe option for road races.

Building a three-shoe rotation is done better using non-Nike products. For example, the Reebok Floatride Run Fast is great for faster days. For quick races of up to a 10K, the New Balance Hanzo S V2 would be our pick. 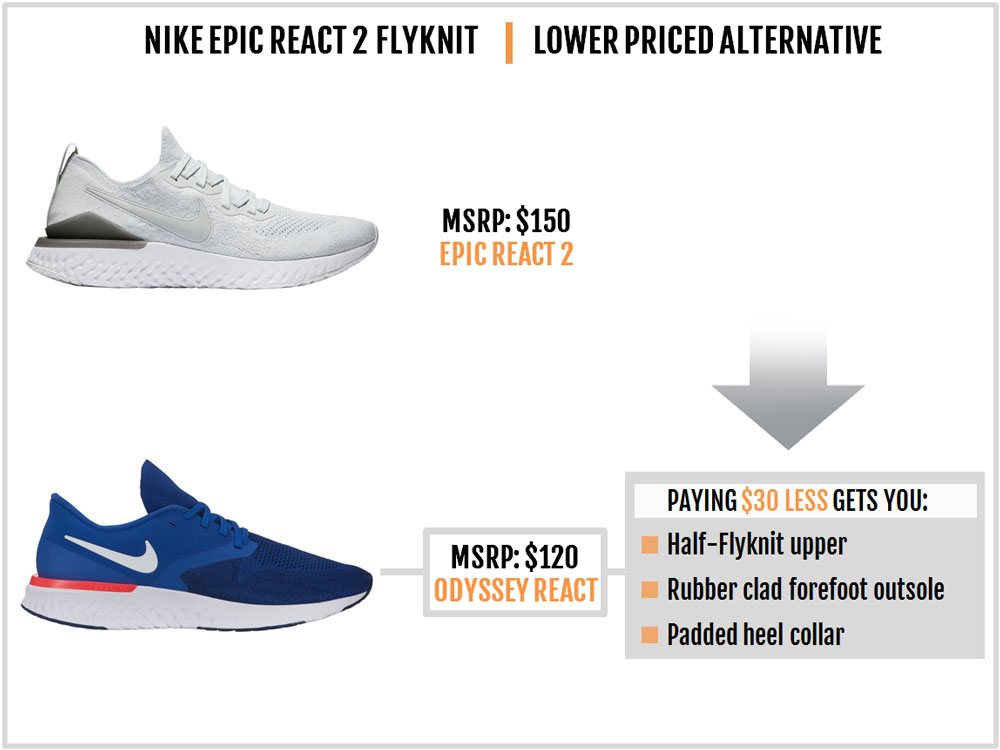 Nike retails other React-based trainers if you don’t want to spend $150 on the Epic. The $30 less expensive Odyssey React 2 has a half-Flyknit, half-traditional upper over a lower volume React midsole. Ok, the upper is more like 3/4 Flyknit – it extends all the way till the rear quarter. The Odyssey’s forefoot has a snug fit.

We must point out that the stack heights of the Odyssey are actually a millimeter higher than the Epic React 2. But here, the Epic is a more cushioned shoe due to its wider (and hence higher volume) midsole.

The Epic React V2’s upper is based on a single-piece, slip-on Flyknit construction. There’re no moving parts like a separate tongue; the Flyknit upper does it all.

The fabric has stretch of varying intensities built into it; some areas like the forefoot and collar have greater elasticity. 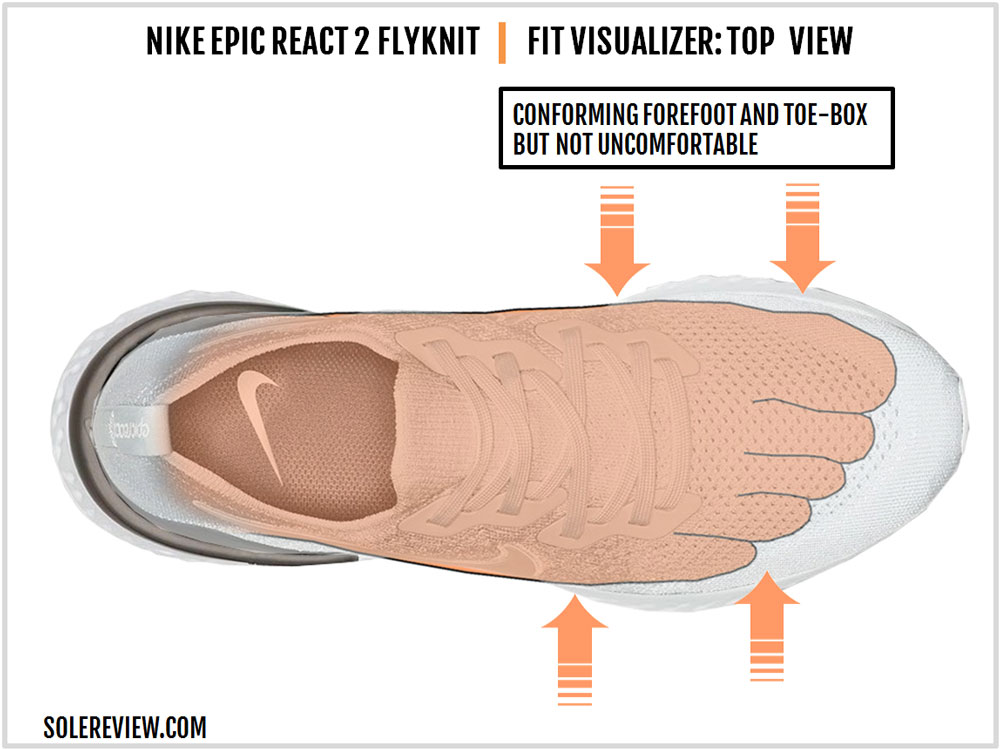 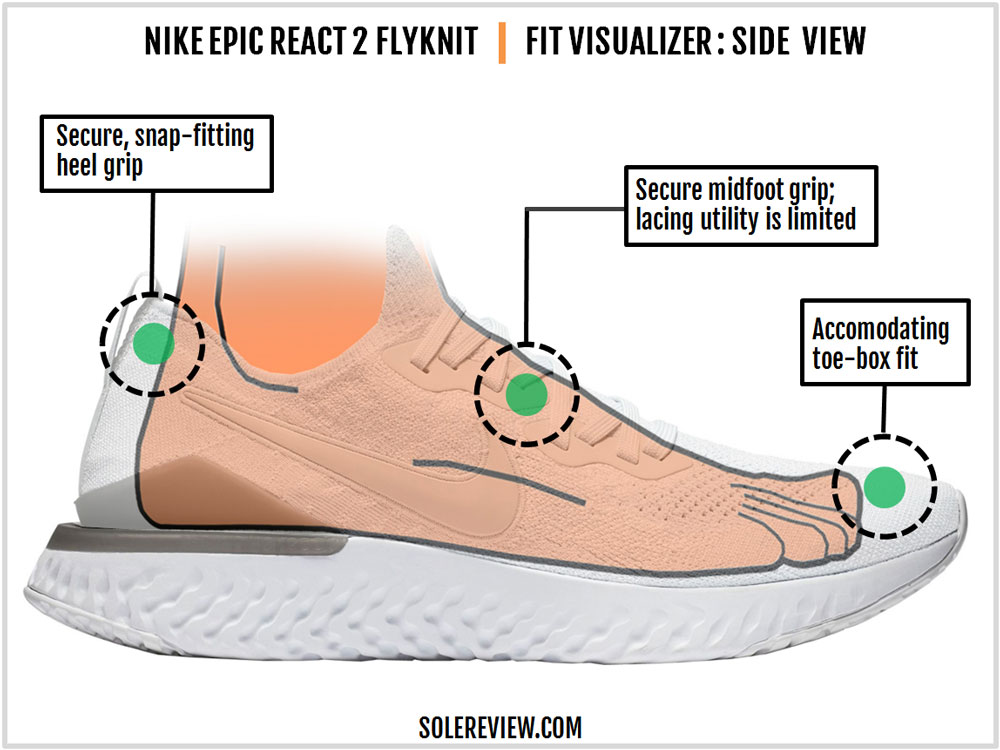 As we said, the V2’s upper does a better job at wrapping the foot in comfort. Though the V1’s upper wasn’t uncomfortably tight, the V2 is more relaxed in comparison.

The heel is softer; the 2019 Epic React 2’s heel does not have a synthetic layer on the outside. In its place is a clip which wraps around the lower heel and connects to the midsole. The softer heel is one of the reasons for a more relaxed fit – it has the foot sitting a few millimeters towards the rear when compared to the V1.

There are a few other changes. The Nike Swoosh logo is larger with embroidered edges. The fused lacing eye-stay is split into two instead of the V1’s single piece design. Splitting the lacing panel allows the midfoot upper to stretch with more ease. The V2 also gets broader laces but they do not affect the fit and feel. 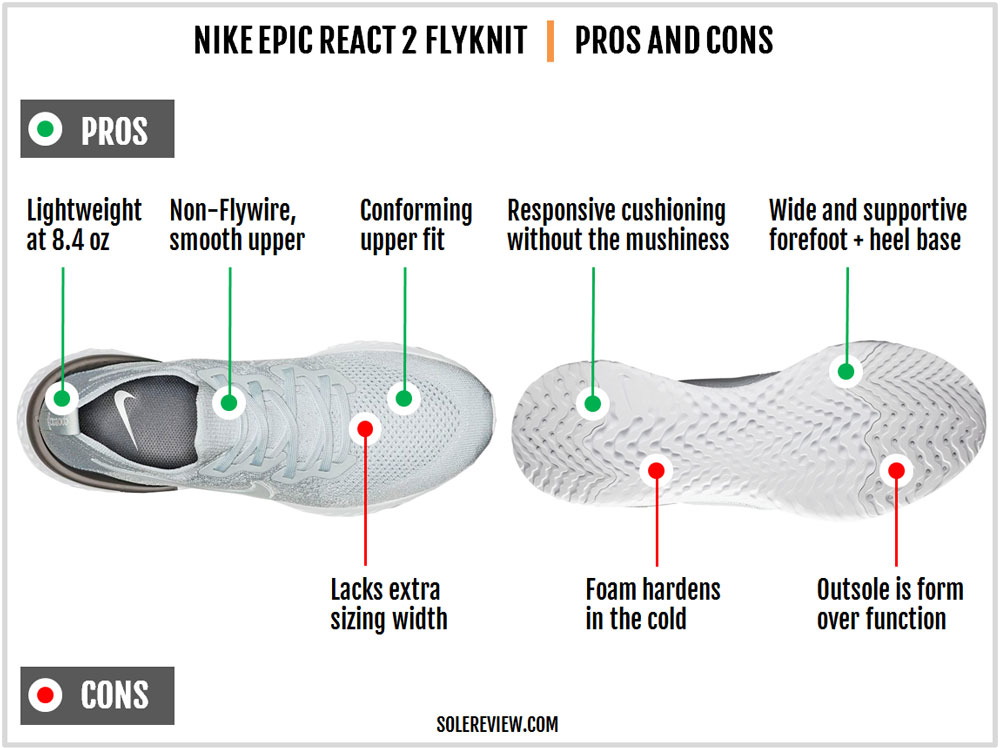 The Epic React Flyknit 2 has many nice things on offer, something which becomes apparent once you start running.

All that dense and responsive cushioning built into the 8.4-ounce profile makes the Epic React an excellent daily trainer and a long-distance shoe. The refreshed upper goes easier on the foot, but optional widths like a 2E (wide) aren’t offered.

Despite its simple design, the Epic React doesn’t lack support. The wide midsole flare creates a supportive platform to run on.

Since the V2 carries forward the V1’s midsole and outsole with nearly no change, it also inherits the decorative outsole which adds very little functional value.

The React foam stiffens in freezing temperatures, something which other foams such as the adidas Boost, Reebok Floatride, and ZoomX foams are highly resistant to. 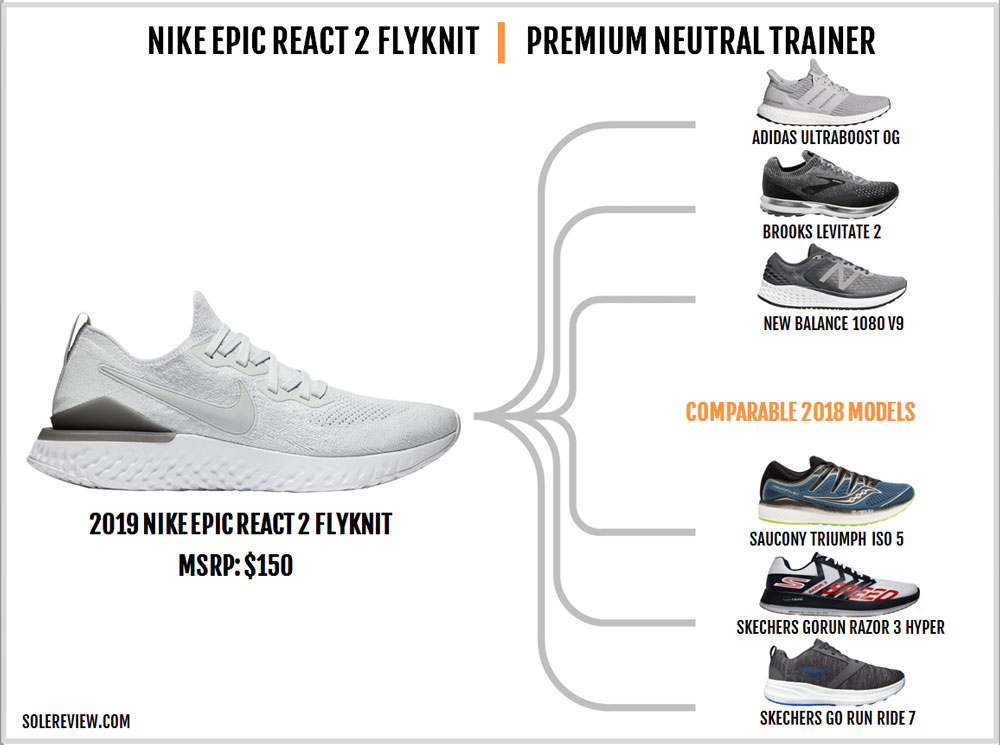 It’s hard to play match-making with the Epic React V2 if we stick to the same price segment.

So this list features models which go up to $180 in price as well as the $100 Skechers GoRun Ride 7 – which by the way, is an under-rated cushioned trainer.

The Skechers GoRun Razor 3 Hyper somewhat competes with the Epic React – it is lighter but not as soft. And that’s perfectly fine; the Skechers Razor 3 is positioned as a speed shoe while the Epic isn’t.

The Pegasus 35 Turbo weighs nearly the same as the Epic React but has a narrower upper and a different midsole composition. The Nike Pegasus Turbo combines ZoomX foam with Nike React for a bouncier and softer ride than the Epic React.

The New Balance 1080V9 isn’t the lightweight shoe the Epic React is. It does compare as a long-haul cushioned trainer though – and it’s got more room than the Nike shoe.

The DNA AMP midsole is the Brooks Levitate 2’s calling card, adding plenty of vertical rebound to the ride character. The Levitate has a knit upper with more material comforts – like the foam-padded heel.

We chose the UltraBoost OG over the Ultraboost 19 because the original Ultraboost has a lower profile midsole and is more performance oriented – though calling it so is a bit of a stretch. The Ultraboost features the namesake foam for a soft and responsive ride. The full-coverage outsole rubber and Polyurethane midsole make the UB much heavier than the Epic React V2.

Lastly, the Saucony Triumph ISO 5 is for those runners who want responsive and durable cushioning without a lot of softness. In the context of this list, the Triumph’s ISOFIT upper is fully-loaded with lots of interior comfort.