Intended use: On all surfaces except trail. Works for recovery runs, non-competitive long distance.

Buy from Ebay.com
The Pegasus 30's forte is not about being superb in one particular area, but rather its ability to bring a lot of well oiled bits together. To be specific, things like cushioned ride, roomy upper and surprisingly solid straight line stability. The shoe feels near identical to the 2012 Pegasus 29 because it carries over the exact same sole unit and similar upper materials. The only downside is moderate tongue slide.
Adidas Supernova Glide Boost, Nike Air Pegasus 31, Brooks Ghost 6, Brooks Glycerin 12, Saucony Triumph 11, Asics Gel Cumulus 16 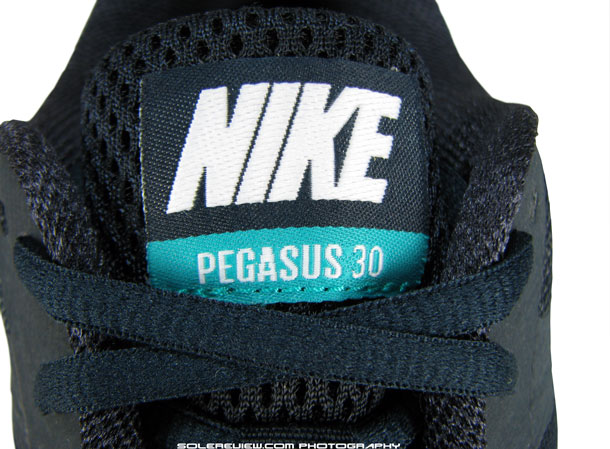 Nike released the 30th edition of the Pegasus last year, permanently cementing the shoe’s place in footwear hall of fame. Thirty years is indeed a long time for anything, and the fact that  Nike Pegasus survived the test of time is telling. Not without its up and downs though; the shoe went from being unbelievably popular in the eighties and early nineties to being dropped out of the line altogether in 1999. Then it resurfaced in the year 2000 and went through a few iterations with varying degrees of success till 2006, when a new design revived the flagging fortunes of the franchise model. Ever since, its been more or less smooth sailing for Nike’s winged workhorse.

The Pegasus 30 turned out to be just a minor refresh, carrying over most of the elements from Pegasus 29. This was a surprise, to say the least. Nike could have done so much with the 2013 Pegasus, with the thirty year celebration being a perfect reason. The past few years, Nike’s veteran models have been eclipsed by a new breed of running performers – different versions of  Flyknit, Lunars, Free and so on. Last week, the Nike Air Pegasus 31 made news with a brand new design re-done completely ground up, and somehow we think that the new 2014 Pegasus is the shoe which the Pegasus 30 should have been.

But this is all in the past, so let’s get down to business and review the Nike Air Pegasus 30. What’s new over the Pegasus 29? Not much- the Pegasus 30 feels a great deal like the 29, since it carries over the sole unit and a lot of common materials.

Upper design and construction: Old wine in a new bottle 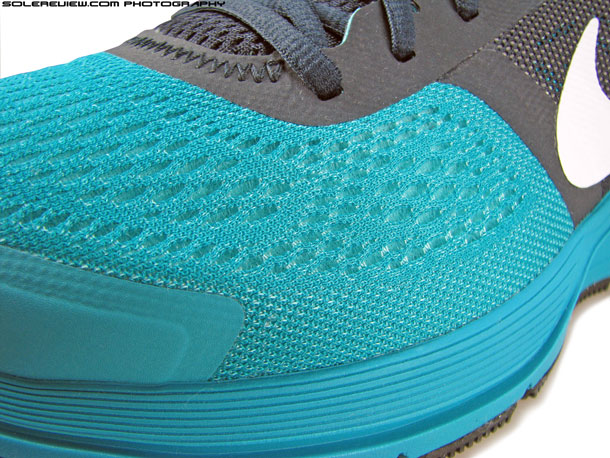 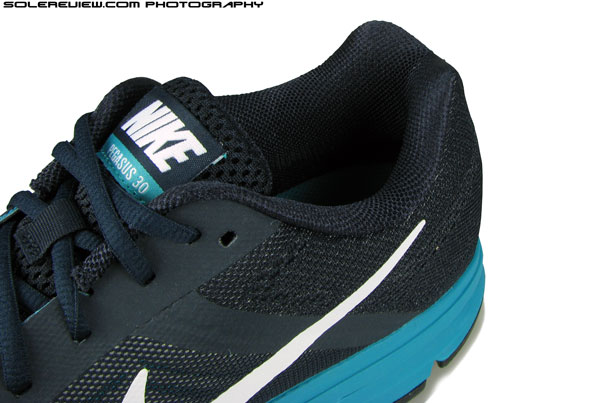 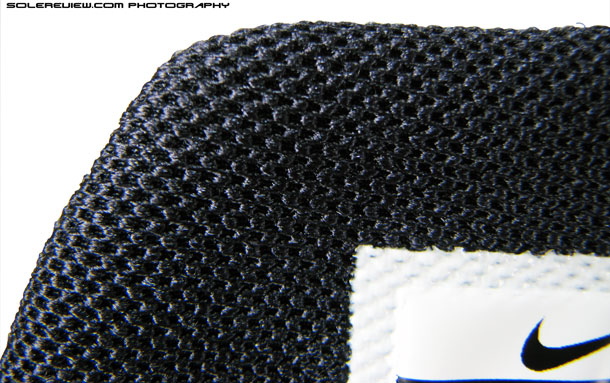 For most part, Nike Pegasus 30’s upper looks and feels the same as the 2012 model. The engineered mesh, which features different knit structures depending on the area, is carried forward to the Pegasus 30. It comes with a noticeably spongy feel to it, which adds to the comfort and fit of the shoe. The tongue is unchanged, using the padded spacer mesh and plush lining from the Peg 29. The heel area uses a  single variety of mesh overlaid over foam, making use of what has to be Nike’s most oft used lining fabric. This mesh (see image above) has done service in countless Nike models the last many years, the 2008 Vomero 3 being our earliest memory of its use. The 2014 Nike Vomero 9 uses it, and so does the 2014 Flyknit Lunar 2. With good enough reason too; the mesh is silky smooth to the touch and adds a dash of luxury wherever used. No surprise that it also shows up on the Air Pegasus 31. (review soon, soon.) 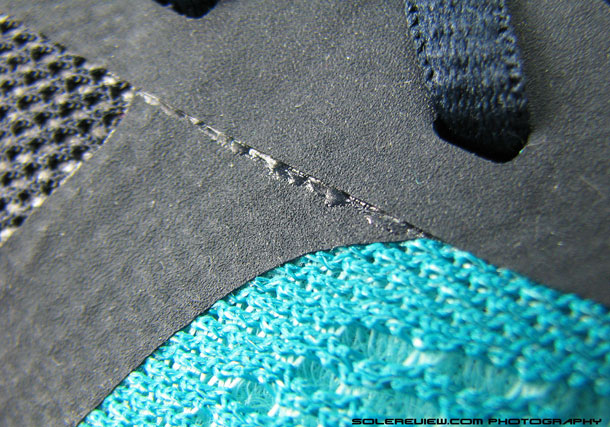 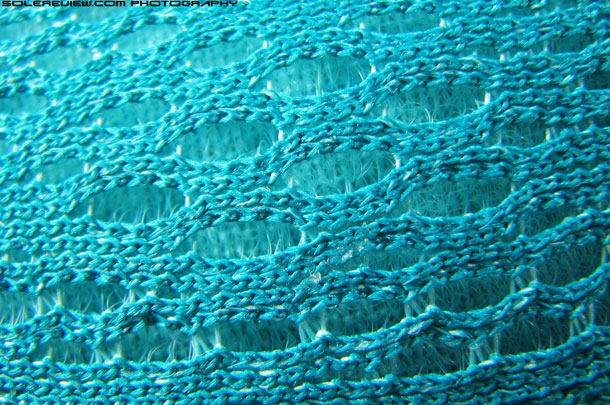 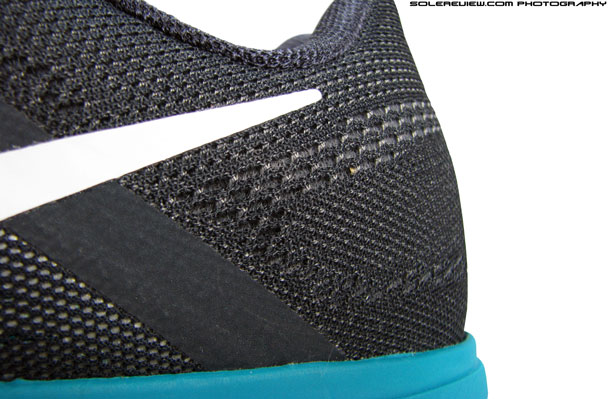 From a construction perspective, the Pegasus 30 does feature a new bits on the upper. The overlays are now all stitch-less and fused-on, instead of the traditional synthetic leather ones on Pegasus 29. This lends the upper a sleeker profile, and opens up some area in the forefoot. The heel area is cleaned up too, with an engineered mesh covering the hard heel counter. The molded piece sits pretty low so the collar top is fairly pliable and prevents any kind of hard dig into the foot. The only casualty of the heel area change is the removal of the small reflective strip, which was seen in the 2012 Pegasus 29. 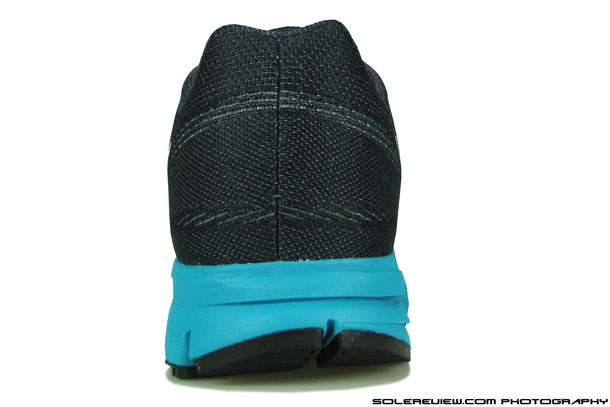 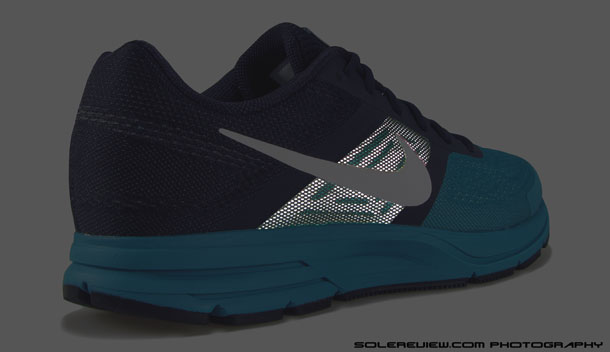 Mid-foot reflectivity is massively improved upon in the Pegasus 30. Reflective panels lay hidden under the mesh and welded Swooshes, but come into their own in the dark. (see simulation above). We wish there were a few more luminous bits, but from the looks of the 2014 Pegasus 31, we shouldn’t be complaining. Boy, we had to look hard for any reflective bits on the Pegasus 31… 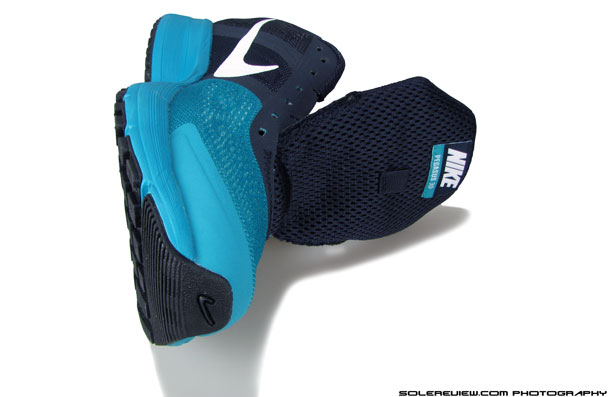 The tongue is not joined to the upper on the sides, but the slide is not so severe. It is well padded, with a foam layer inserted between a spacer mesh and the lining – it tends to stay put once the laces go over it. Speaking of laces, we thought that they were slightly short and could do with a bit more length. 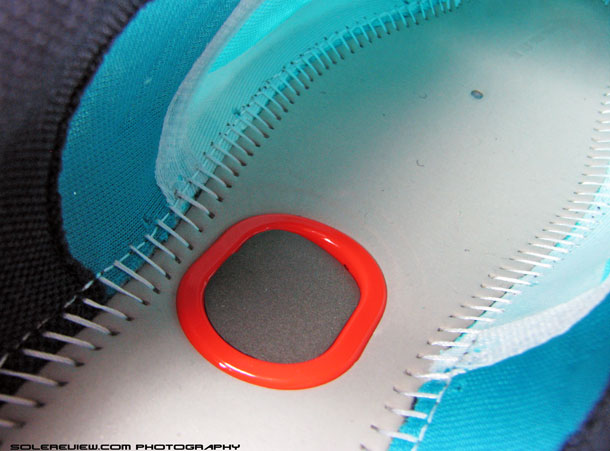 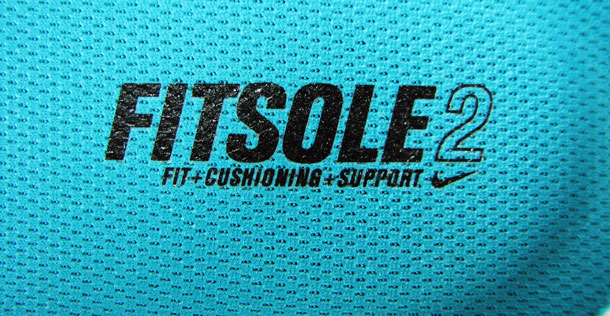 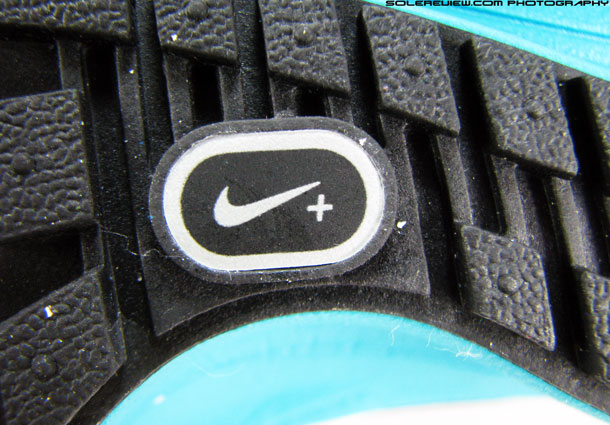 The interior environment of the Pegasus 30 is seamless for the large part, so it feels smooth throughout. The foot rests on the removable insole called Fitsole 2, which uses a single layer of memory foam topped off with a friction free fabric. This is the same as the last year’s, and Pegasus 30 is likely the last to feature it. The newer 2014 Nike running shoes have evolved their sockliner categorization and naming convention, and we’ll be able to tell you more once we review the Pegasus 31 later this month. Okay, if you want to know right now – the sockliner in the Pegasus 31 is exactly the same except for what it says on the top.

Worth pointing out is that the Pegasus is one of the last remaining shoes to feature the Nike plus cavity, so grab a pair before they’re gone. You’ll be happy for another year, and get yourself a good bargain in the process.

Midsole/outsole: Same as 29, and nothing wrong with that 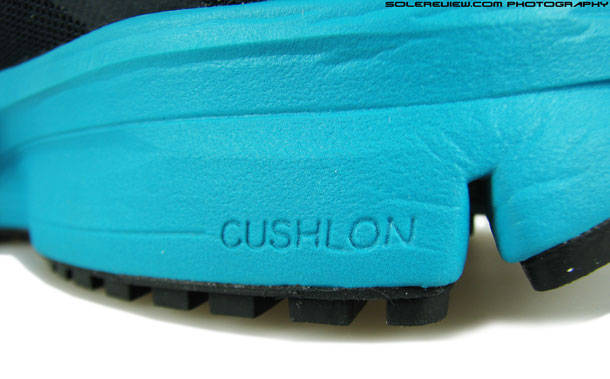 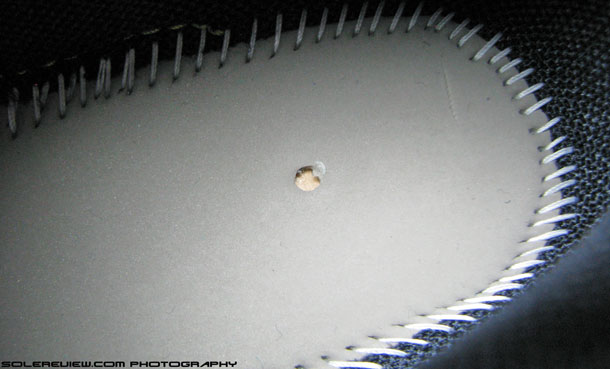 The exact bottom unit carries over from the Pegasus 29, sans any tweaks. The midsole foam is full length EVA which Nike calls Cushlon – a softer version of the traditional injection molded EVA. A Zoom Air bag sits right below the heel and insulated by a cardboard layer on top (see image). This, we reckon, is Nike’s solution for a stable ride, akin to using ‘Flightplate’ in their Zoom Air equipped Basketball kicks. 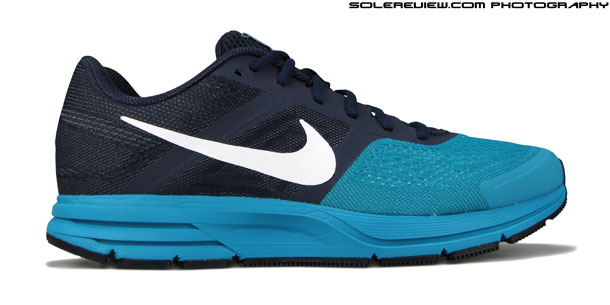 The lateral sides of the heel and forefoot midsole have these deep grooves built into them, which are designed to help increase midsole compression. They do work as advertised, and add to the overall cushioning experience. 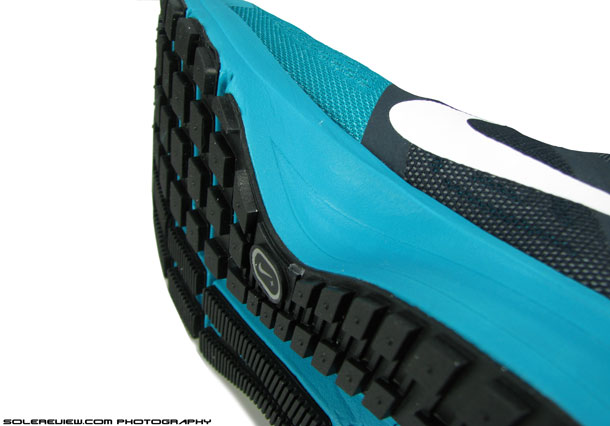 The medial side of the midsole has a very prominent flare (see above). This ensures that the under arch area area is well supported, and during runs we felt that the combination of Fitsole and the midsole flare working harmoniously together to provide arch support. 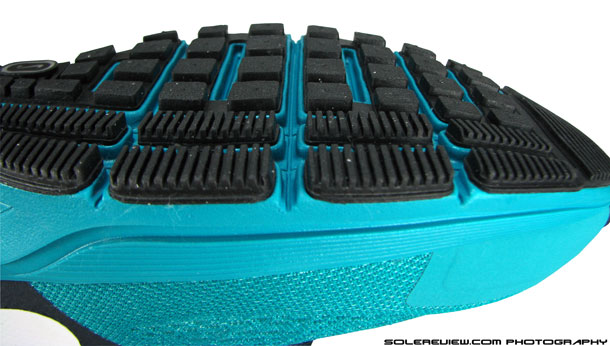 The Nike Pegasus 30 is designed to be a neutral running shoe, aiming to combine a high level of cushioning with stability, and the shoe does just that. At lower speeds, heel cushioning comes across as soft, with the Zoom Air bag and grooved midsole walls compressing with body weight transfer. Forefoot cushioning is top notch too, with a lot of flexibility coming into play during motion. Wide and deep flex grooves cut across the forefoot surface, helping the shoe bend effortlessly.

Pick up the pace, the cushioning turns responsive without any mush; heel to toe transition is smooth owing to unbroken outsole rubber coverage.The heel crash pad is beveled upwards at an angle and is separated from the rest of the outsole by a deep flex groove, so heel strikers will experience a gradual splaying of the heel area during impact, and that’s good. 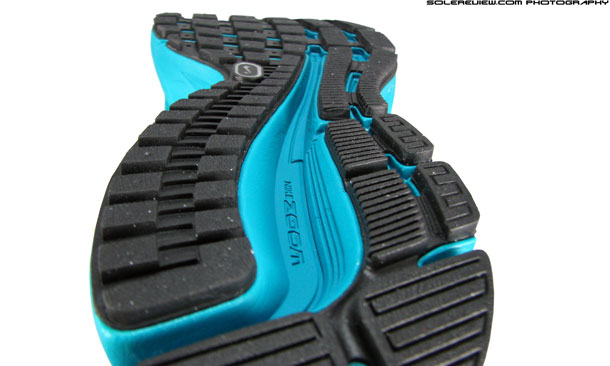 Straight line movement is excellent. There’s a deep ridge running beneath the midsole which keeps the weight centered, so that helps the shoe track straight. Similar to what Asics calls the ‘Guidance line’, if you’re familiar with that term. Nike does not have a name for this feature, but it works, and that’s all we care about. Outsole grip is strong, with multiple rubber lugs and a series of thin ribs which run the outer length of outsole. They serve their purpose well, but they seem prone to breaking away after long term usage.

The fit is roomy – there’re no pressure hot spots or errant upper areas which cause discomfort. Runners alternating between Flywire lacing based models and the Pegasus will find the shoe upper a bit loose, but we see that as relative. For example, we switched the Flywire based Vomero 9 and the Pegasus 30 during runs on the same day, and the Pegasus felt way more relaxed. The mid-foot areas wraps around without constriction, the forefoot is spacious and the collar has a plush grip around the ankles.

The Pegasus is our idea of a comfort shoe; it is not spectacular by any means, but comes across as a wholesome package of many elements working well together. A comfortable upper is married to a cushioned, yet responsive unit, making the shoe suitable for most run types.

There’s plenty of rubber underneath which grips well, and should last longer than any of the newfangled lightweight shoes. And at $100, it does a far better job at being a neutral cushioned shoe than the $130 Vomero 9.

The 2014 Air Pegasus 31 is out in the market, at the same price. The Pegasus 30 is remains a good buy, especially with a healthy knock off its original retail price.