This unique road racer combines a lightweight build with a medial post - there aren't many of those around. For its fifth year, the 1500 gets a new upper and a slightly tweaked ride.
Lightweight, speed-friendly, smooth and secure upper fit, outsole grip, subtle medial post
Now why did New Balance trade the V4's responsive insole for a thinner one? 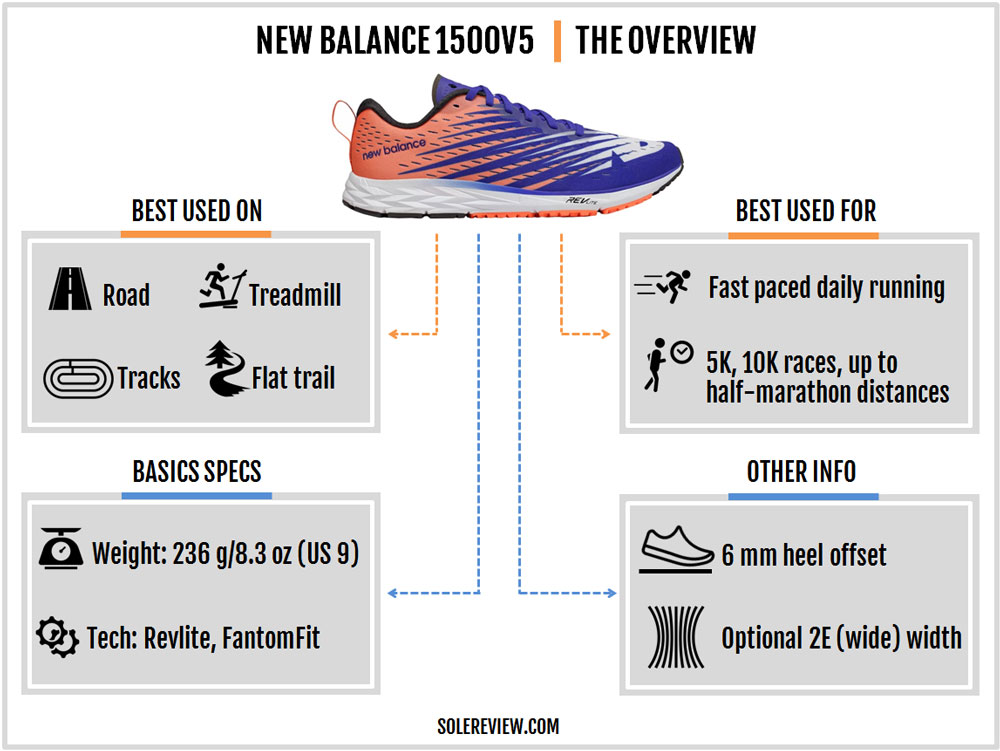 The first edition of the New Balance 1500 entered the market at a time when there weren’t many medially-posted racers around.

Back then, you had the Asics DS-Racer, the Saucony Fastwitch and a handful of other models representing this category. When the 1500V1 received unanimous praise (solereview included), one assumed that this niche category would soon be populated with new models from other brands.

That did not happen. Road racers with a post continue to remain elusive. It didn’t help that the entire industry has cooled to the idea of a medial-post.

It is this ‘post medial-post’ world the 1500V5 arrives to, and it pretty much ends up being just one of the two such options today. The other one is the Saucony Fastwitch 9.

The V5 has the same midsole as the V4 but makes functional changes to its upper which makes the fit more relaxed. The outsole lugs have been redesigned but the basic geometry stays the same. And for some reason, New Balance has decided to plonk in a thinner insole inside the V5. As a result, there’s a minor update to the ride quality.

But if you ask us whether it’s worth swapping the V4 for the V5, we’d say no. The changes aren’t significant. As far as the ride is concerned, we actually prefer the V4 over the 2019 model. 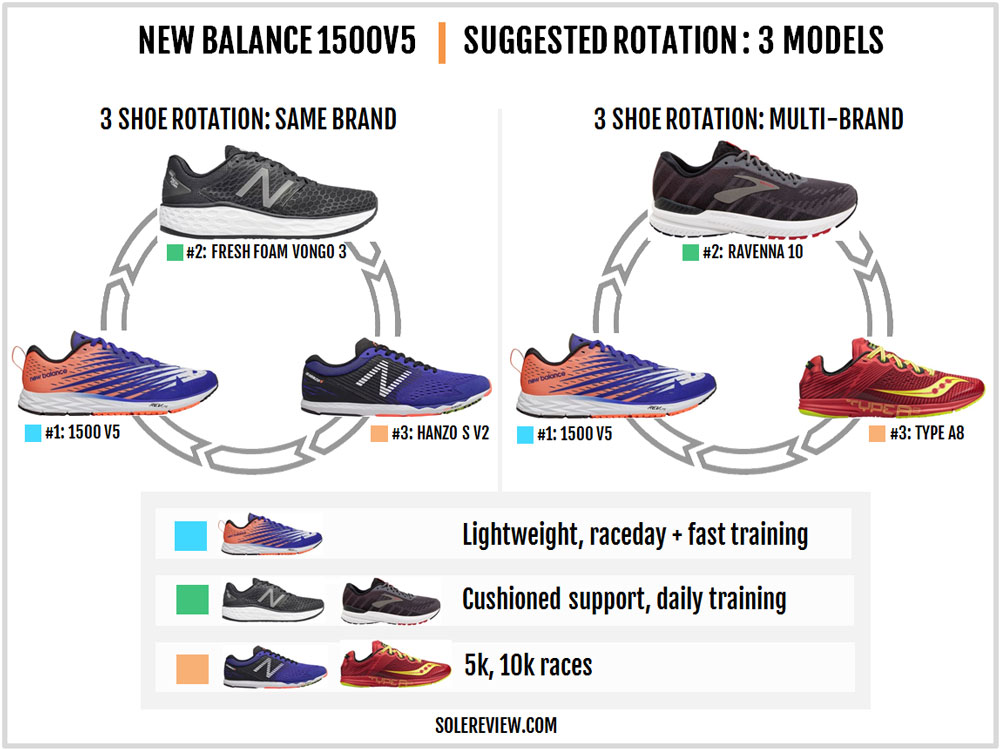 Though New Balance categorizes the 1500V5 as a racing flat, there’s a lot of foam insulating the foot from the running surface. If you want the pure racing flat experience, then the Hanzo S V2 is our top pick.

Yes, we know – the Hanzo is making frequent appearances on our reviews. There are other flats like the Saucony Type A8 or the Reebok Floatride Fun Fast, but the Hanzo offers the best functional value.

On the other hand, running shoes like the New Balance Vongo V3 or the Brooks Ravenna 10 offer you more cushioning with non-pokey stability features. So when you look at the rotational chart, you get a very fair idea of where the 1500V5 sits.

The 1500V5 is a good choice for runners who seek to mix fast miles with distance. For example, the 1500V5 is best used for races of 10K to a half marathon when you need a blend of speed and cushioning. 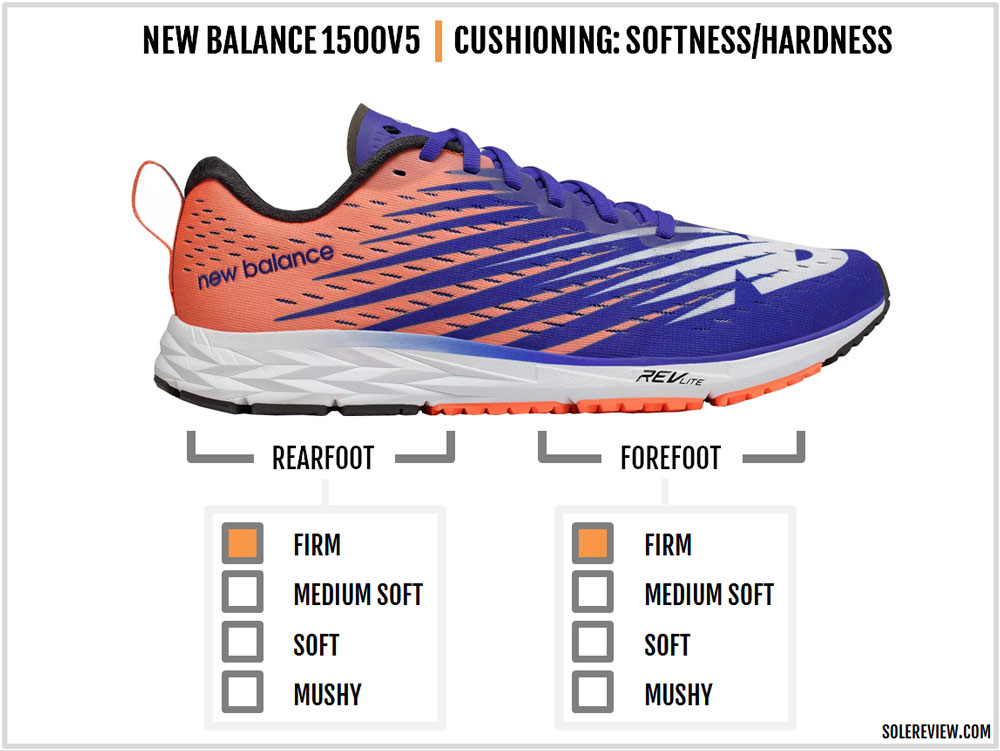 ‘Cushioned’ isn’t the same thing as softness, and the 1500 certainly isn’t the latter. The full-length Revlite midsole is firm – and it’s more so than the 1500V4.

Which shouldn’t be, considering that both the versions use the same midsole and a similar outsole.

The outsole gets brand new lugs without altering the basic layout. There’s a plastic half-shank on the inner side along with multiple rubber slabs. Grippy lugs provide excellent traction and last long.

A few readers might wonder why the 1500’s transition groove separating the lugs isn’t a problem here. Asics uses a similar design and we always call out that as an issue. That’s because the lugs edging the 1500’s forefoot groove aren’t split like the way Asics does it. The channels are also very narrow and not as broad as Asics’s Guidance line.

The reason for the difference between the V4 and V5’s ride quality lies inside. For some unexplained reason, the 1500V5 uses a thinner insole than the V4. The removable sockliner is no longer the chunky, perforated sheet of molded foam. It is flatter and has less give. Even the 1400V6 has a thicker insole.

Due to this change, the 1500V5’s ride acquires a firmer and flatter character. Nonetheless, the Revlite midsole is great for speed runs owing to its non-sink firmness and the smooth transition quality. The medial-post blends into the rest of the midsole without making itself felt during runs. 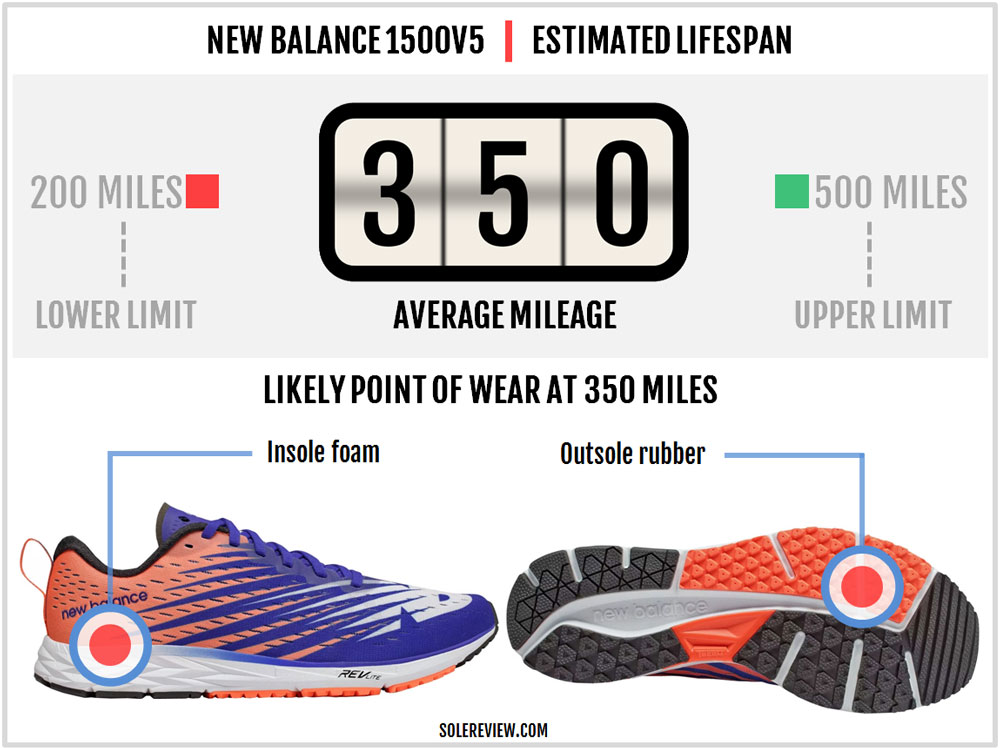 The only time when the medial post might become a concern is after 200-300 miles when the rest of the midsole starts compacting. The firmer wedge doesn’t do so at the same rate as the softer Revlite.

The 1500V5 also holds its tolerance between published and dynamic (weight loaded) heel drops quite well. 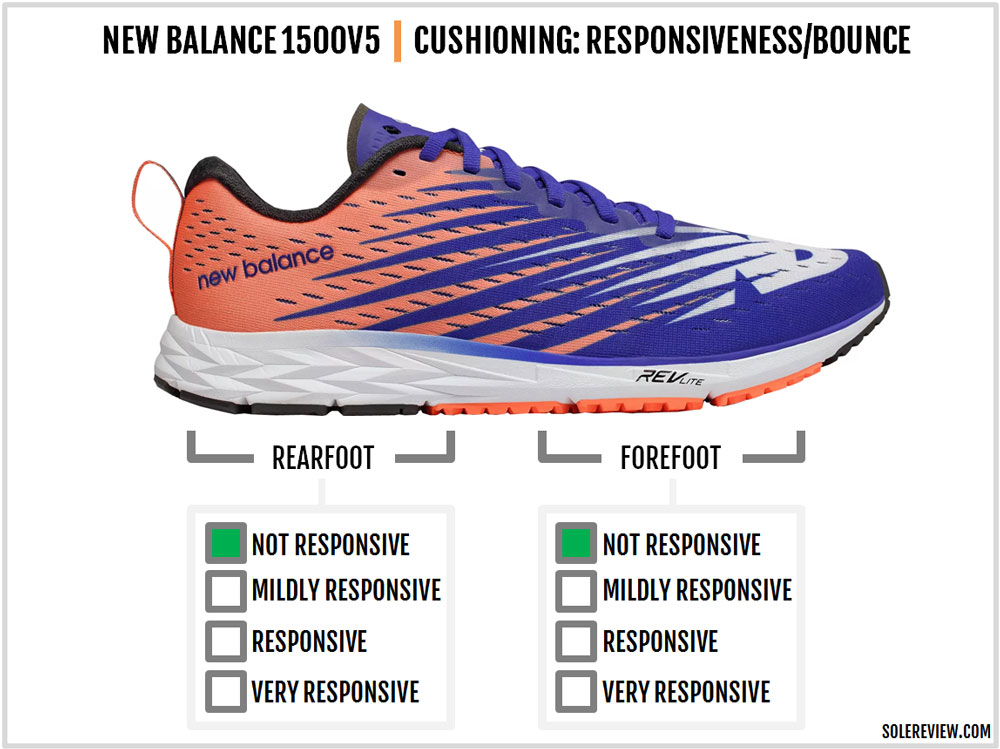 It’s amazing how much difference an insole can make to the overall ride quality. There’s very little compression happening underfoot; with the thicker insole gone, even the top-layer of softness is flat to begin with.

The 1500V5 is efficient at speed but feels less responsive than the V4.

Style is a personal choice, but for whatever it’s worth, the V5 is a better looking 1500. New Balance uses speed graphic with a ‘logo burst’ over the single-piece, engineered mesh upper.

Whereas the V4 used a mesh with dense and ventilated knit sections over the forefoot and midfoot, the V5’s upper has a smoother fabric with a mono-texture appearance. The new textile is softer than the V4 too. 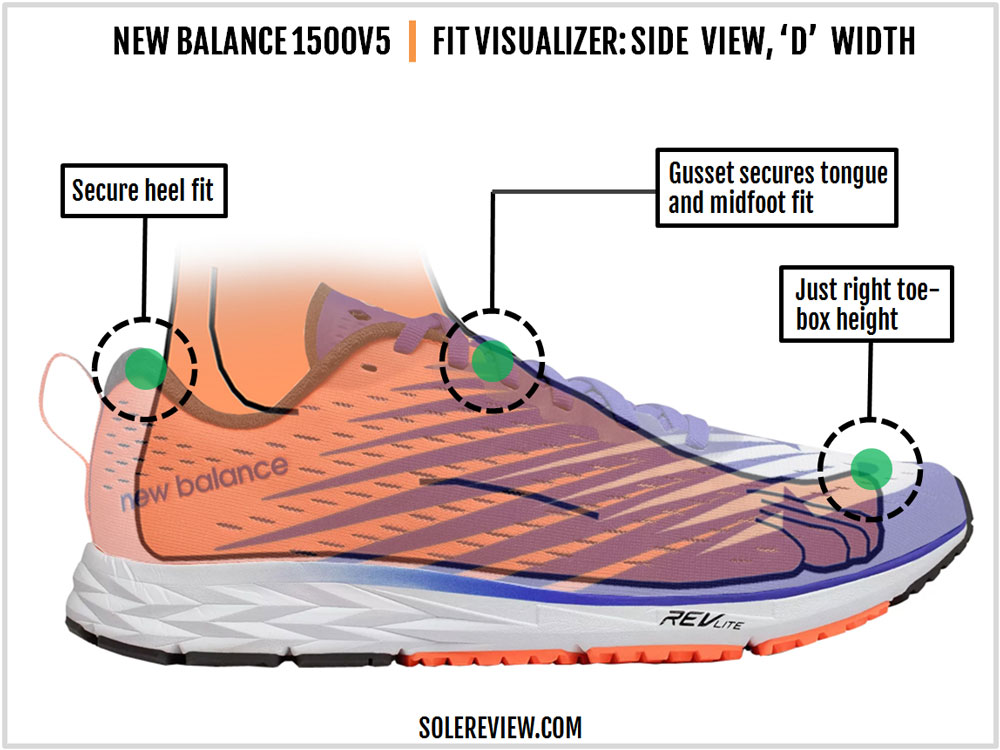 With these updates, the interior is softer over the foot. The rest of the upper is standard 1500 fare. The fit is snug, as befits a road racer. It fits true to size.

Naturally, you won’t get regular trainer room in a shoe designed for fast runs. 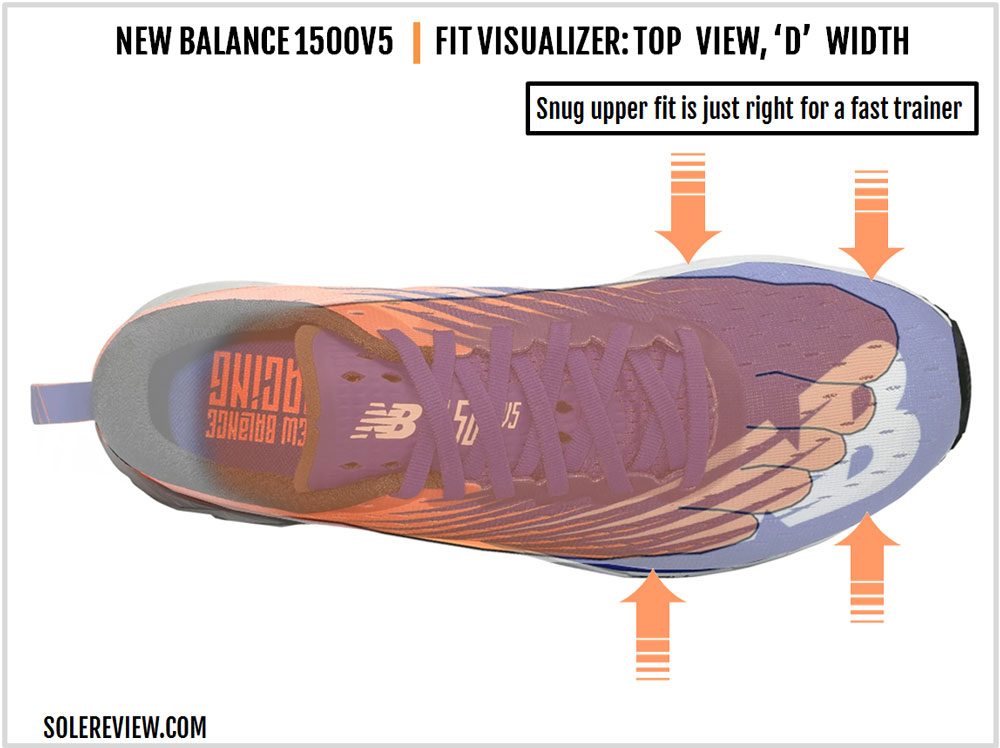 While there’s an optional 2E (Wide) available for sale, we recommend that you stick to the D for an optimal ride – unless your foot really needs that wide fit.

Speed runs and races are best experienced in a snug-fitting upper.

The tongue is connected to a gusset so there’s no sliding around. The flap edge is soft so it doesn’t bite; the top of the perforated tongue has a synthetic fused over it.

The layered tongue does a great job at managing top-down lacing pressure while keeping the foot ventilated. The lacing holes are reinforced with a no-sew laminate for additional strength.

The heel design with its comfortable padding is nearly identical to the past versions. The internal counter keeps the foot locked in. There are some design details like the rubberized pull tab and the raised New Balance branding on the exterior. 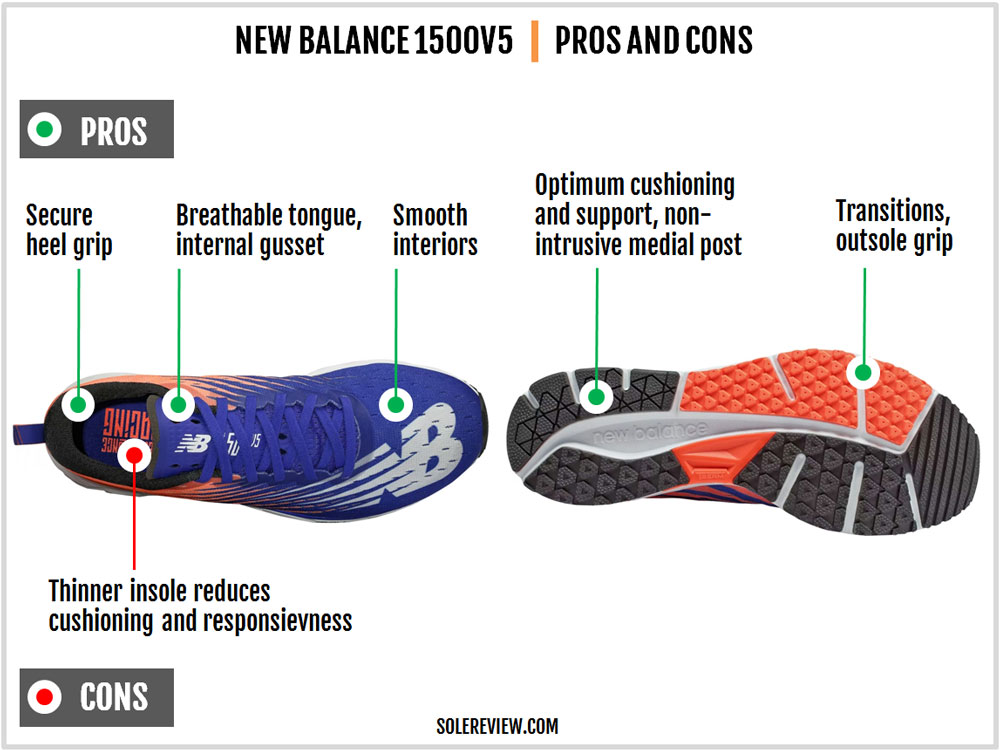 One of the 1500’s biggest strengths is its ability to meld a proper medial post into a low-profile midsole without skewing the ride. The post doesn’t feel like a retrofit and doesn’t hinder the 1500’s smooth and seamless ride character.

Although the 1500 is classified as a speed racer, the Revlite has plenty of cushioning to make fast and long runs relatively comfortable.

The V5 carries forward most of the 1500 series’s good parts. The snug upper has a soft and smooth feel, both due to the material/last choice and the use of an internal gusset.

We didn’t understand why New Balance replaced the original (V1 to V4) insole with this new thinner version. If the lower-profile 1400 has it, so should the 1500. 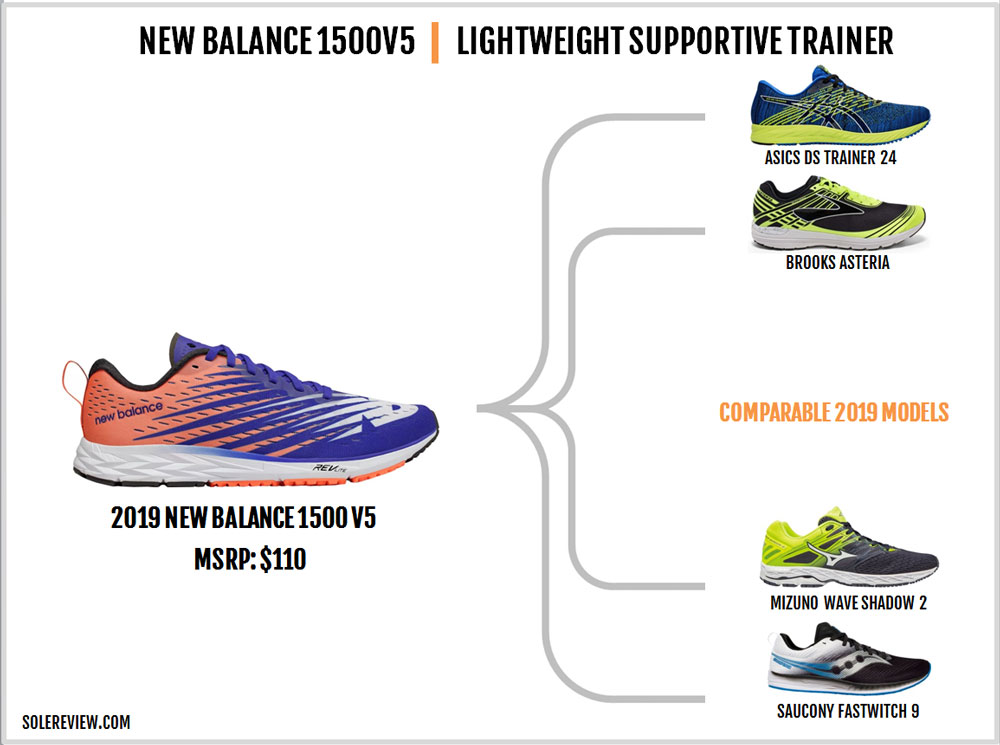 The 1500V5 lacks company in this sparsely populated category; only the Saucony Fastwitch 9 is a close match with the 1500’s upper fit and ride. The 9th version of the Fastwitch is very similar to the 1500, save for a slightly firmer ride.

Among others, the Brooks Asteria is a stability racer with a medial post placed closer to the heel.

Indirect competitors include the more cushioned adidas adizero Tempo 9 and the Asics DS Trainer 24  – the latter has a more comfortable upper. Mizuno doesn’t sell the Catalyst anymore, but the standard Wave Shadow 2 is a supportive road racer.