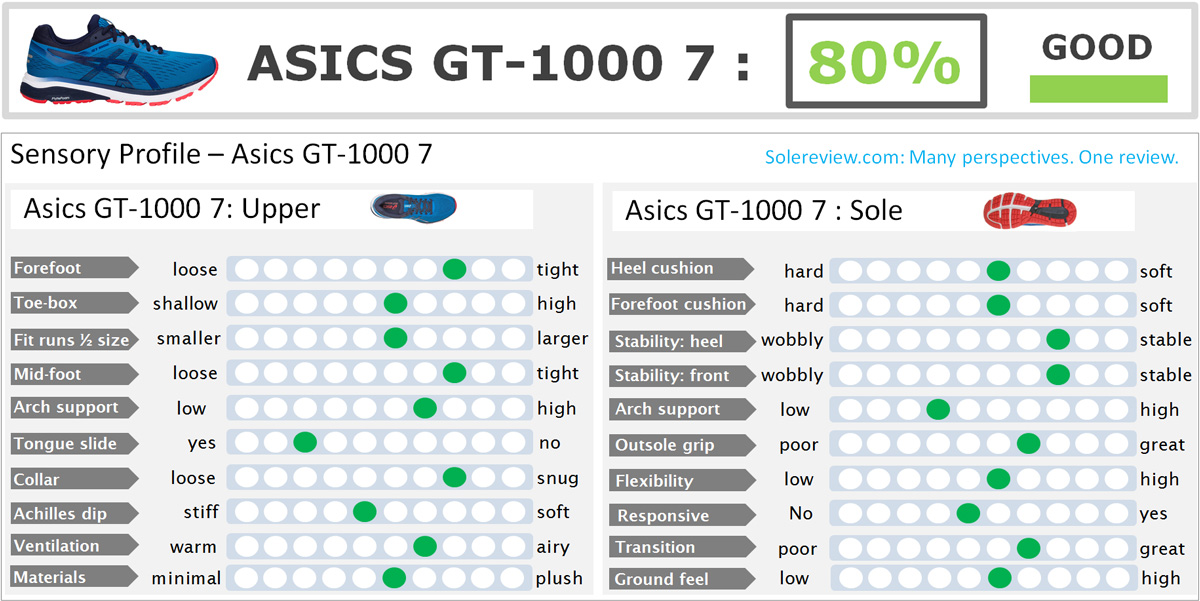 The GT-1000 7 is a pleasant surprise. For once, this Asics shoe is everything that the brand claims it to be. The midsole is cushioned and supportive. Except for the narrow inner forefoot, the upper fit and feel is great for the price.
Cushioned and an unbiased ride, subtle medial post, smooth interior, optional widths, lightweight, great price-value, outsole grip
Tongue slide, the forefoot fit on the inner side needs correction 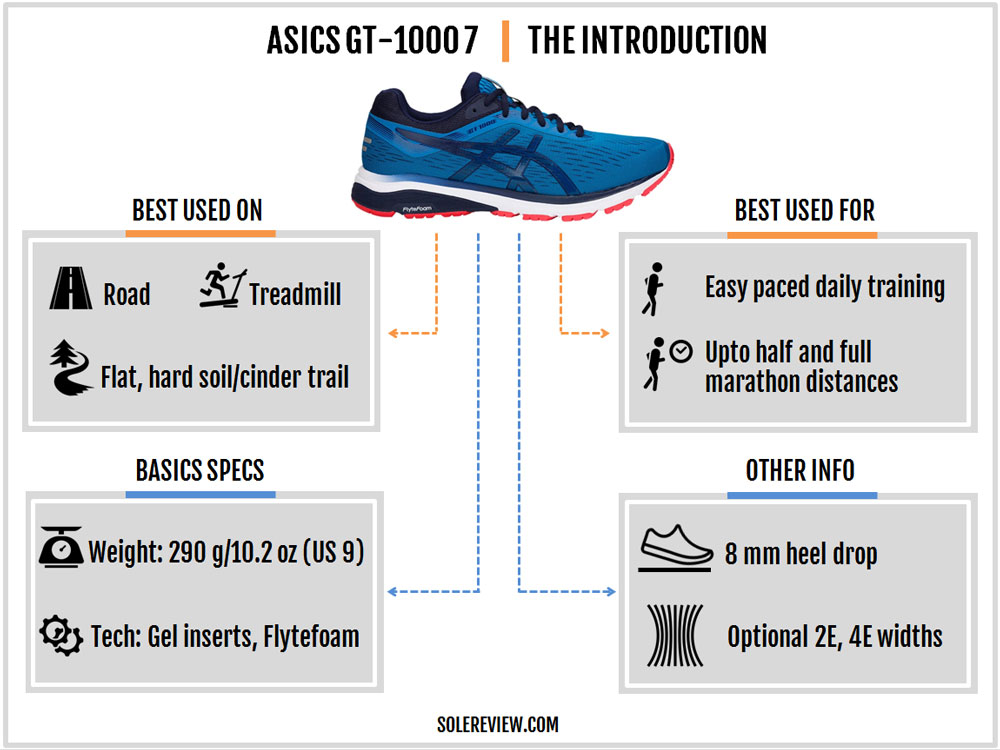 There used to be a time when the GT-1000 smelled like a cheap shoe.

No, seriously. We are not joking. Read our review of the GT-1000 2 from over five years ago; the shoe was, quite literally, an industrial stink bomb.

The 1000’s low-spec material was one of the reasons why we always recommended the slightly more expensive GT-2000. Even with a price gap of $30, we felt that the upgrade was justified.

Even though the GT-1000 doesn’t have a full-length Flytefoam midsole or the upper plushness of the Kayano, it is a good option for runners who want a traditional stability shoe without a pricey tag. It is also softer under the forefoot than the Kayano – it sounds crazy, but it is true.

As far as the GT-1ooo is concerned, Asics is no longer the proverbial frog in the well. Even the sub $100 price segment is now crowded with great products, and the GT-1000 needs to keep up. And it has.

The GT-1000 7 is a well put together package of mesh, foam, and rubber. It is as stable as it claims, and the upper fit isn’t bad at all – except for one small fault. It does differ from the GT-1000 6 on a few areas, a topic which will be covered in this review.

As typical of shoes within the stability category, the GT-1000 is sold with a medial post. But it doesn’t lead to a bias in the midsole softness. The ride has a neutral vibe, the kind which makes the GT suitable for most runners who want an affordable and comfortable daily trainer.

At a basic level, the GT-1000 7 draws inspiration from the 6th version’s midsole form factor.  A full-length EVA midsole has a firmer medial post on the inner side and a crash pad made of a different material.

Most of the midsole updates are made to the crash pad. There is no longer a visible Gel window; the entire heel wedge on the lateral side is now made of Flytefoam.

Just like the GT-2000, the 1000 neatly integrates the medial post into the midsole. It might not appear so from the outside, but the inner side is firmer than the lateral midsole. The harder section is limited in a small area just above the outsole extension.

Asics gets rid of the relatively larger plastic Trusstic and replaces it with a small plug in the center. The outsole geometry has been updated with a bridged midfoot; the inner outsole connects the rear and the forefoot without any gap.

This outsole also acts as a support structure on the arch side with the firmer section of foam on top. The outsole is still split by a ‘Guidance line’ cutting across the center of the midsole but it has a few noteworthy updates.

The forefoot outsole has additional grooving under the toe. Not only that, the rubber lugs have been redesigned and they now somewhat look and act like the ones from the Nike Vomero 12. The GT-1000 uses soft blown rubber in the front which cushions landings and transitions. 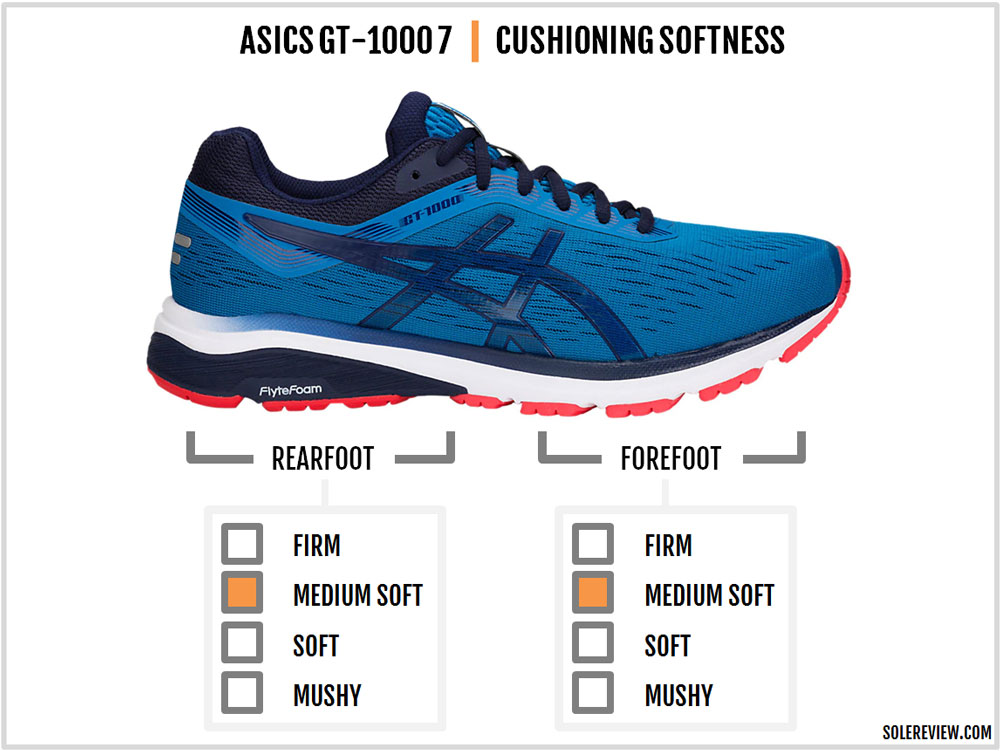 What’s also interesting about the GT-1000 7’s midsole is that it is soft. Not pillowy soft, but a just-right density which makes most runs comfortable. To put it in perspective, the GT-1000 is softer than the New Balance 860V9 or the Saucony Guide ISO 2.

We also noticed that Asics is lowering its midsole gradient on some of its models. The GT goes down from a 10 mm drop to 8 mm – which is pretty much the sweet spot for daily trainers. 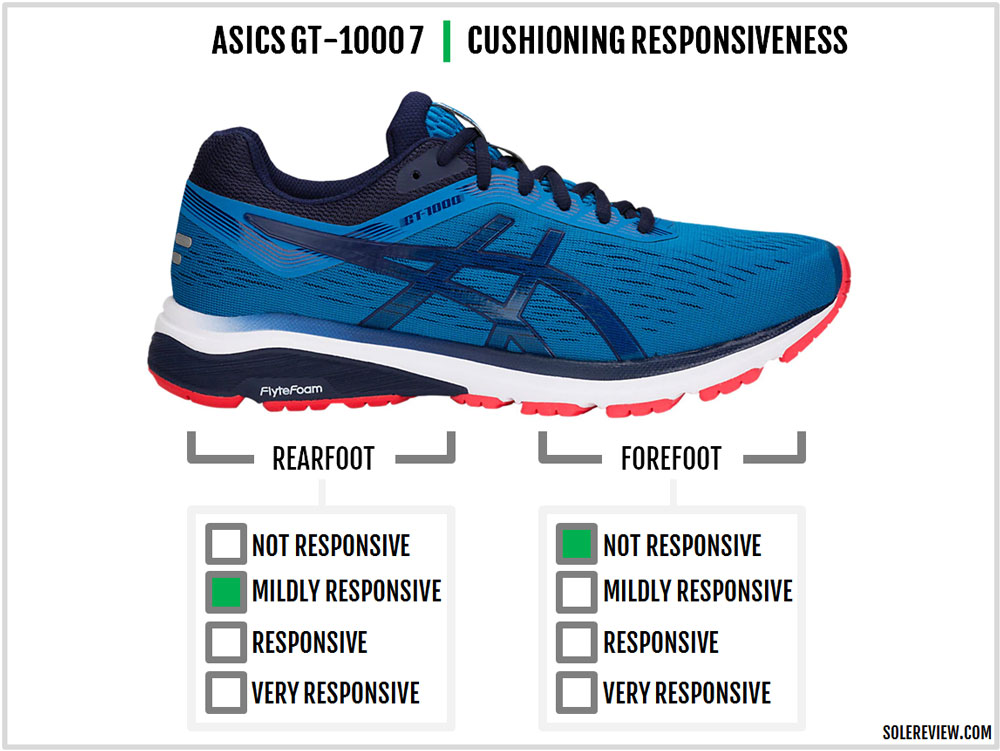 The Flytefoam plug and the midsole it connects to are similar in softness – so the ride is unbiased under the rearfoot. The midsole is mostly EVA foam so the level of spring-back is nearly non-existent.

The forefoot uses single-density EVA so the landings are cushioned and smooth. Like the GT-2000 7, the rubber lugs are separated by wide grooves but the feeling of edge pressure isn’t as acute as the 2000.

This change has to do with the rounded lug design and the soft rubber which flexes along with the midsole instead of working against it. 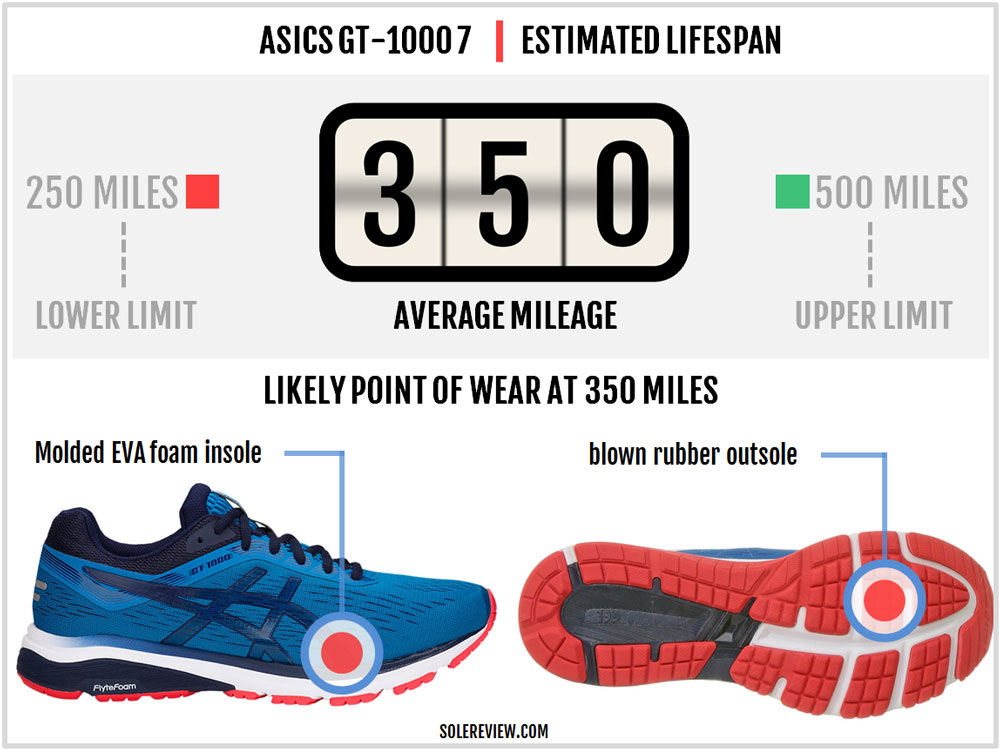 The GT uses a molded insole over a foam lasting. Not sure why Asics claims that the GT-1000 7 has an Ortholite insole.

The one used inside the GT-1000 is a regular molded variety with no Ortholite branding. This will be the first component to flatten, followed by gradual wear and tear on the outsole. 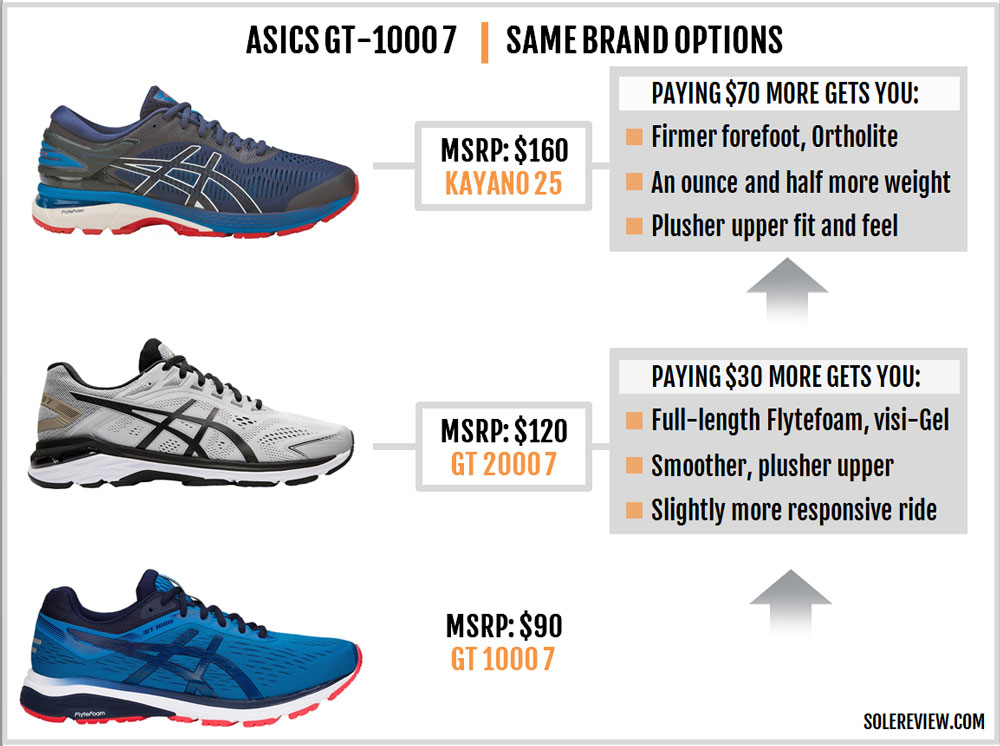 All we’re trying to say is this – if a comfortable stability shoe is on your mind, then the GT-1000 7 is an excellent budget choice. You don’t really need to spend more than the GT-1000 price. The only thing you need to watch out for is the 1000’s upper fit – we discuss that during our upper fit breakout. 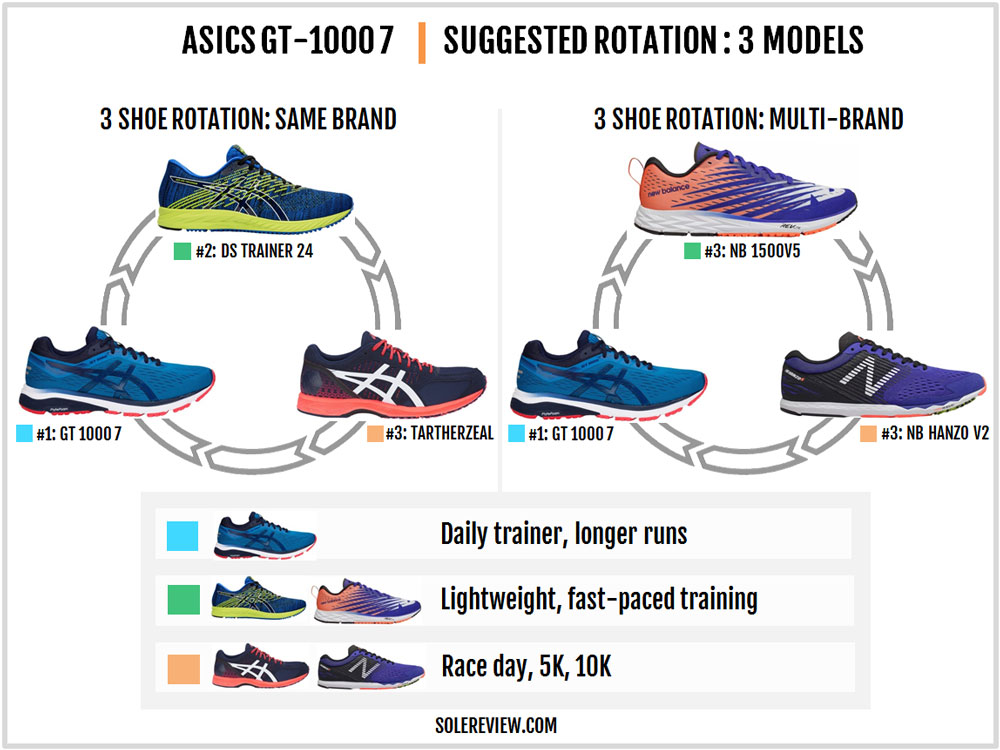 By rotating the GT-1000 with other shoes, you can get the kind of ride you want. The Asics DS Trainer 24 or the New Balance 1500V5 gets you the firm ride for fast runs.

On the other hand, Asics Tartherzeal 6 and New Balance Hanzo S V2 are perfect for blasting through those 5K’s.

The GT-1000 7 is priced below $100 so the upper sticks to the basics. Most of the upper is engineered mesh covering hidden underlays and linings.

The upper redesign replaces the cut-and-stitch clutter of the GT-1000 6 with fused layers. The GT-1000 7 even gets rid of the inner side Asics logo. 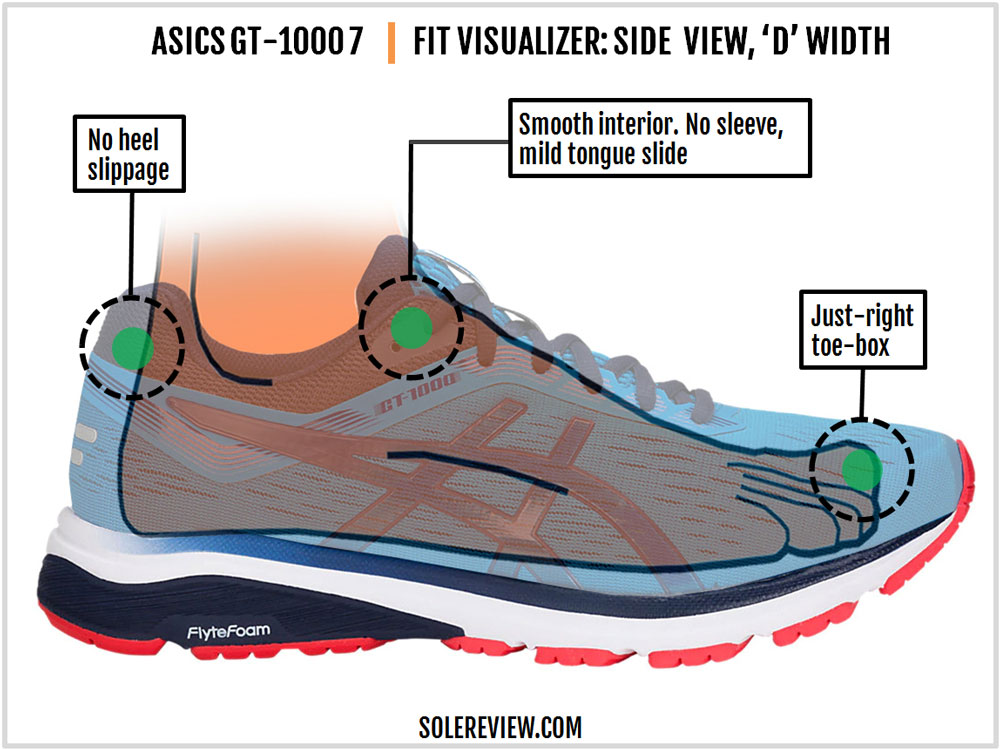 The materials aren’t the definition of plush but cover the foot in adequate comfort. The heel and tongue are soft, padded, and grip well. In the front, the toe-box has enough vertical and sideways room. There’s no inner sleeve of any kind, so the tongue shifts during runs.

It’s the forefoot fit on the medial side which merits some discussion.

There are two changes on the GT-1000 7’s inner forefoot. The first is the introduction of an internal strapping system with shades of Nike. While the laces aren’t connected directly to straps, the latter goes over the base of the big toe and the midfoot. 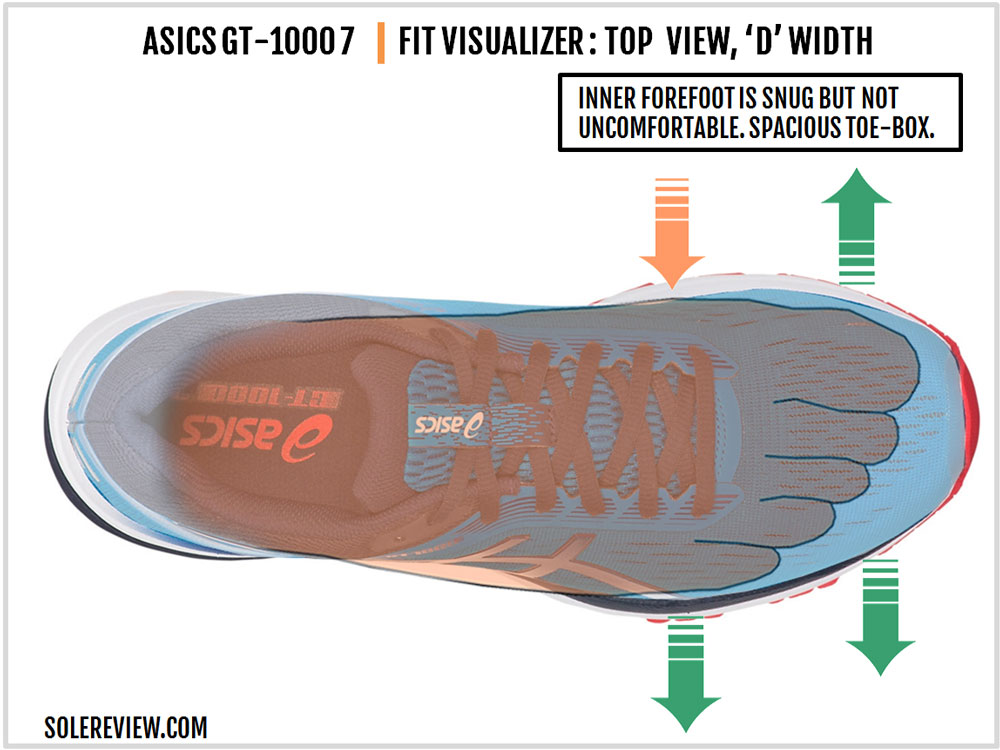 While Asics intended to have the straps act as a support system, it results in a less than ideal scenario. It makes the inner forefoot narrower-fitting than the outside. Secondly, removing the Asics logo and using a generously ventilated mesh makes the midfoot area less supportive – except for the straps, there’s very little holding the foot back.

None of this is uncomfortable for regular D sized runners. But if you have wide feet, then you might want to consider a wide or extra wide version. 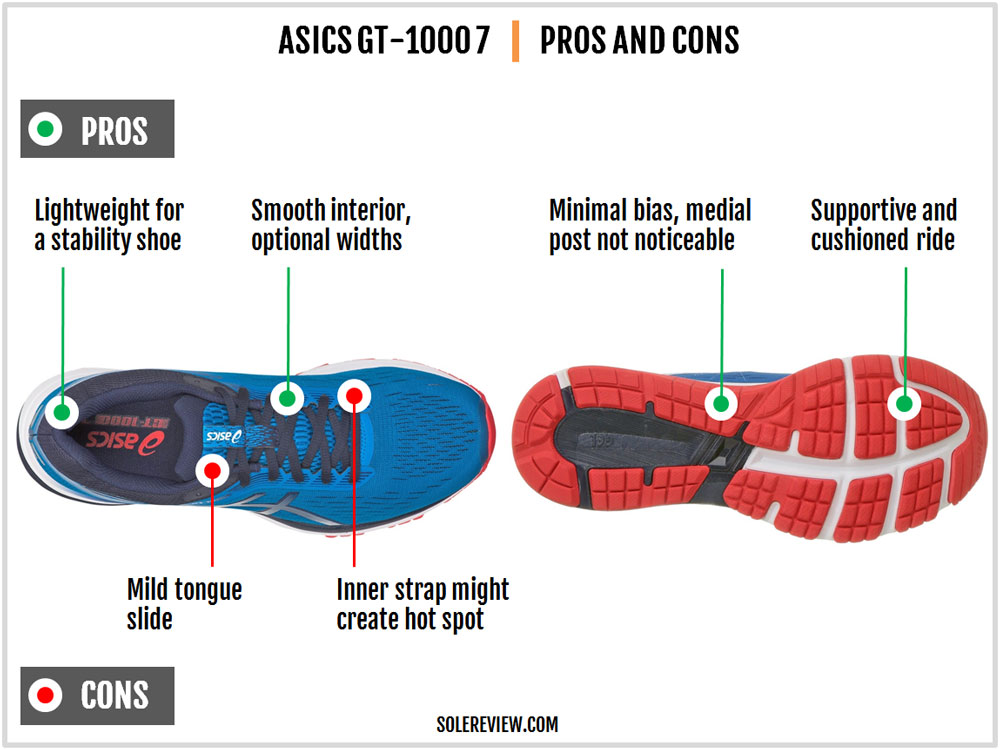 There are some areas which remind you why the GT-1000 7 is a $90 shoe. The heel lining is more basic than the 2000 and isn’t as plush. The insole isn’t Ortholite. Flytefoam is confined to a small area under the heel. The 1000’s laces are shorter than the GT-2000 and the Kayano.

The upper has a smooth fit but needs some work on the inner side. The tongue also slides due to the lack of an anchoring system, but then. that’s true for many Asics models.

Other than that, the GT-1000 7 functions perfectly well as a supportive daily trainer. The midsole is a great blend of comfortable cushioning and support – all at a great price. The harder Duomax section is integrated seamlessly into the midsole without making itself felt.

And for a shoe in this price segment, the availability of two optional widths can’t be beat. 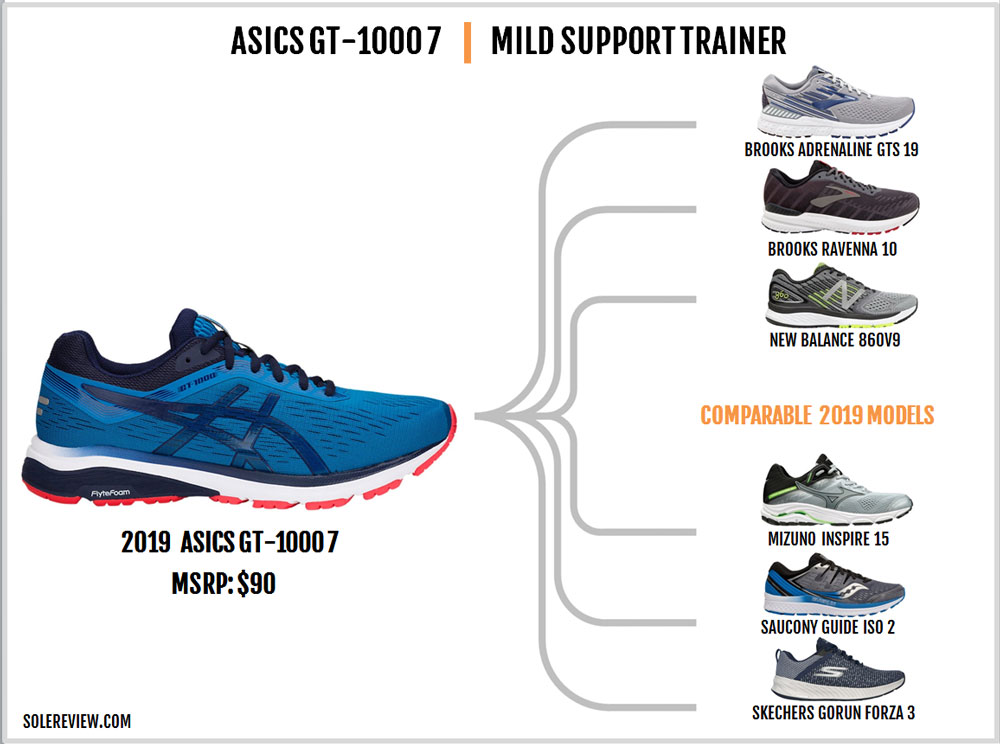 Except for Brooks Ravenna 10, there aren’t many competing models in this price class. And even the Ravenna 10 isn’t a stability shoe in the medial-post sense; it trades its medial-posts for above-midsole ‘GuideRails.’

Thus, the remaining shoes on this guide are nearly identical to the ones on the GT-2000 7 review. This means that most of the shoes are in the $120-130 price bracket, which only emphasises the GT-1000’s great price-value.

The Brooks Adrenaline GTS 19 is a supportive version of the Ravenna with bigger GuideRails and a plusher upper. But it does compare versus the GT-1000 as a stability trainer with a neutral touch. And so does the Mizuno Wave Inspire 15 with its balanced ride.

The Saucony Guide ISO 2 has a medial-posted ride without a bias and is firmer than the GT-1000. The New Balance 860V9 is a conventional stability shoe with a supportive ride and a comfortable upper.

And if you like what Skechers is doing lately, then their GoRun Forza 3 is a stability shoe alternative.