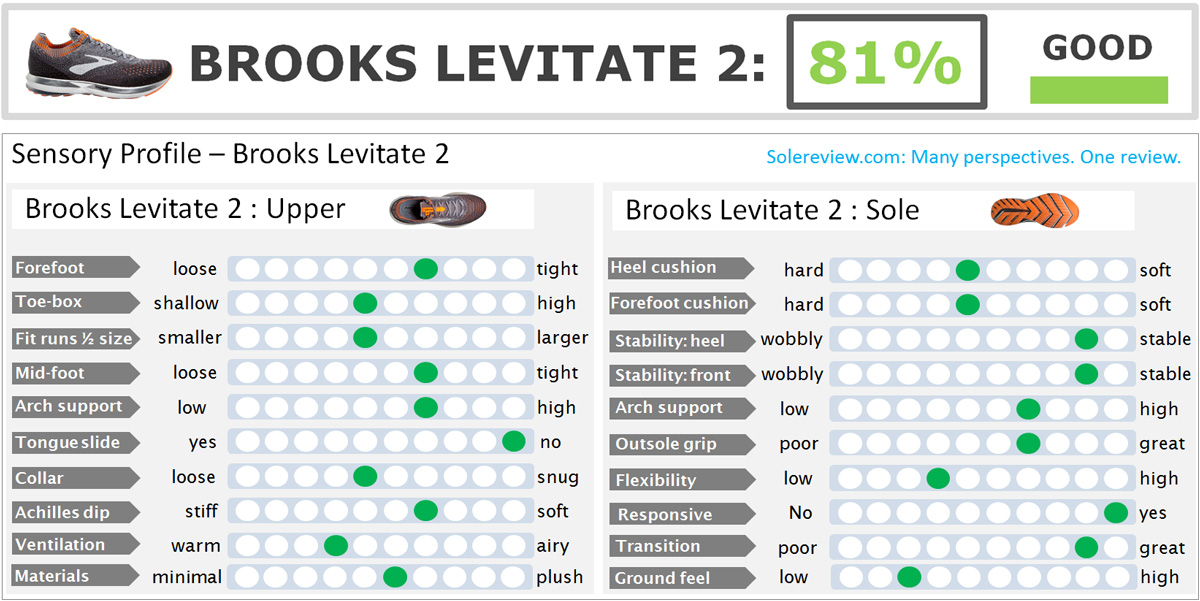 Brooks’s marketing pitch: Experience the next level of infinite energy. 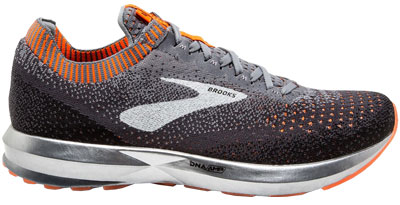 Buy from Brooks
.Buy from Amazon

Buy from Zappos.com
What sets the cushioned Brooks Levitate 2 from the rest of the pack is the DNA AMP Polyurethane midsole and its vertical rebound. The V2 gets a new upper with a different heel and midfoot fit. However, it remains the heavy shoe the V1 was.
High degree of vertical responsiveness, smooth and stable ride, smooth upper fit
Bottom heavy, the heel fit isn’t as secure as the V1, there have been reports of the DNA AMP midsole cracking into half. 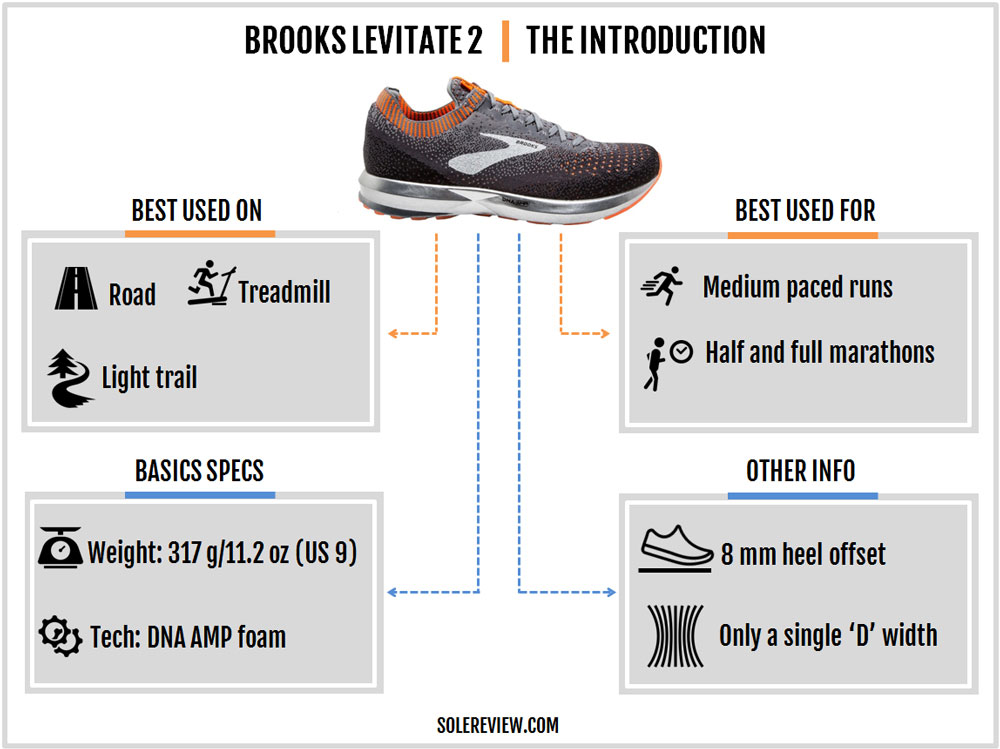 Introduced nearly two years ago, the Brooks Levitate was a new spin on the traditional Polyurethane midsole formula. Once used widely by brands in the ’80s, PU midsole fell out of favor once lighter yet durable foams like the EVA showed up.

Polyurethane midsoles have their strengths. They offer plenty of responsive cushioning and are durable as long as the PU foam isn’t damaged by hydrolysis or photolysis – exposure to moisture and light. Now you know why the midsoles of vintage running shoes flake like stale bread.

PU foams are also heavy; even expanded kinds are not exempt. That is the reason why shoes which use Boost and Everun weight north of 11-ounces.

Considering the background, Brooks took a bold bet by choosing PU as a midsole material. At the same time, DNA AMP isn’t a vanilla PU foam. The latter is encapsulated inside a shiny urethane exterior which protects the core foam from the elements.

The thick covering also adds a different flavor to the ride quality. The DNA AMP creates a pronounced sensation of vertical rebound, which is unlike any other shoe we’ve run in. The responsiveness and cushioning turnover is swift and efficient.

The Levitate 2 uses the same 8 mm drop midsole as the V1, which means that there’s no change in how the shoe rides. The upper is new. The heel and the midfoot receive a set of updates which affect the Levitate’s aesthetics and the fit.

The outsole uses translucent rubber instead of the V1’s regular rubber – however, that doesn’t affect the ride. 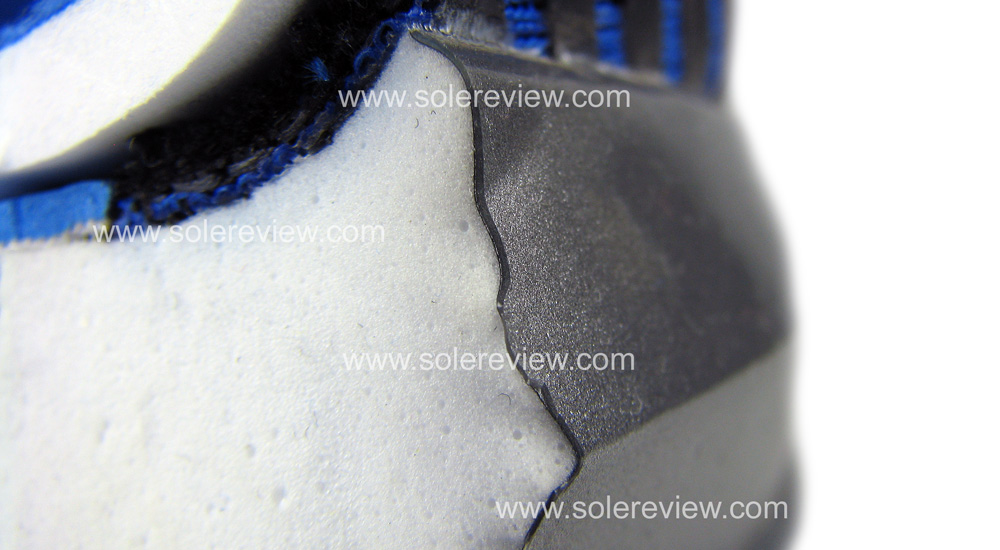 We cut open the midsole in our review of the Levitate V1 to show you what’s inside. Because it’s when you see the internal workings of the midsole, only then does the resulting ride experience make sense.

We published a bunch of dissection pictures, but the one above explains the design very well. 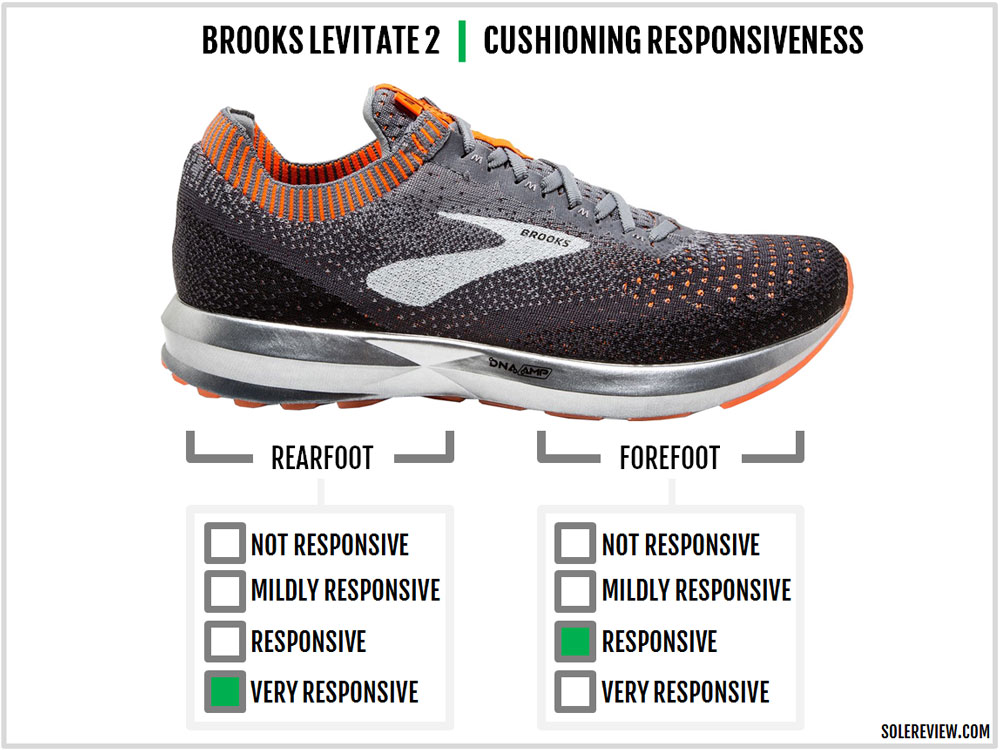 A soft PU foam core is encapsulated within a thicker skin. So unlike most foam-based midsoles, the sideways compression is contained during loading. So the only way is up and down – and that’s exactly what the Levitate 2’s midsole ends up doing. 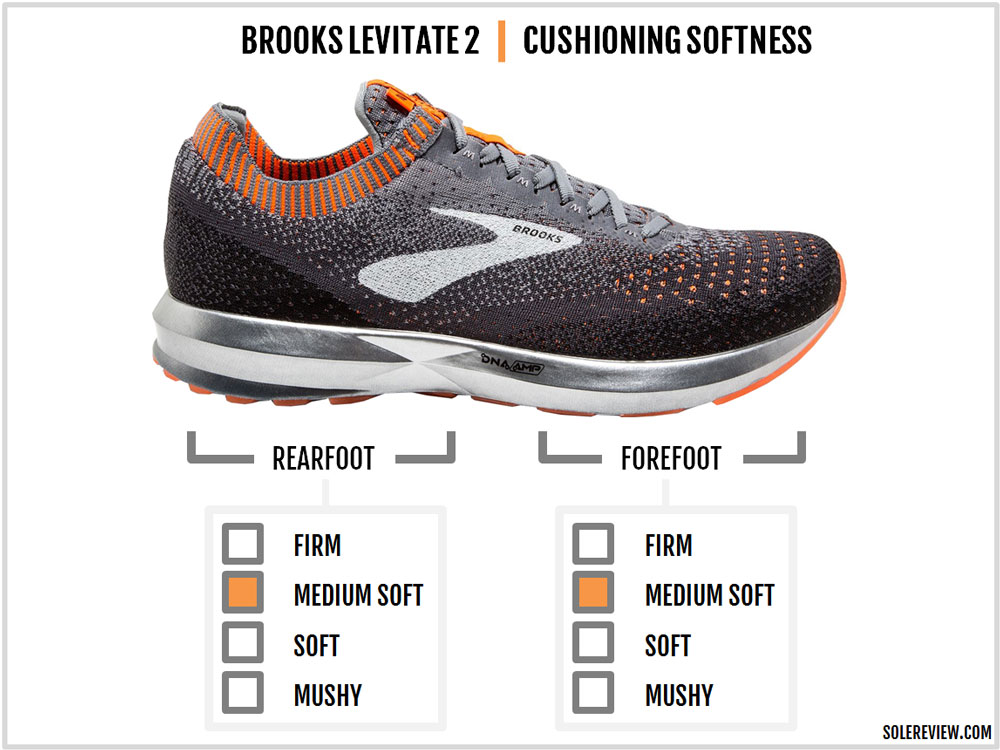 So the DNA AMP cushioning tech isn’t based on a single-density material like the rest. Rather, it is a composite manufactured of two entirely different materials. Both complement each other very well. The PU foam provides cushioning while the outer skin adds firm responsiveness by acting as a supportive structure.

The outsole is generously grooved and yet, it isn’t overly flexible under the forefoot. The firmness of the DNA AMP composite makes the shoe resistant to flexing. In its place, you get snappy forefoot transitions which allow you to roll forward.

If it wasn’t so bottom heavy, the Levitate 2’s ride checks most of the right boxes. The uniform spread of midsole material makes the ride smooth; the molded foam insole (not Ortholite, and the same as the Levitate V1) gives the otherwise resilient midsole a soft topping.

It’s easy to see why the Levitate feels bottom loaded; because it is. With a minimal upper, the PU midsole and the rubber outsole contribute to most of the 11.2-ounce weight. By the way, the Levitate 2 swaps the regular rubber of the V1 for a see-thru crystal rubber compound.

We see the Levitate make a strong case for itself as a running shoe for heavy runners. The dense and supportive cushioning is good for weight loading – the Levitate is highly resistant to bottoming out. The transition groove under the heel also splays during loading and centers the weight.

There’s another reason one should buy it – the Levitate has an extremely high turnover rate for cushioning and responsiveness. The DNA AMP midsole feels extremely efficient in its spring-back delivery; not many shoes can do what the Levitate 2 does.

The cushioning turnover gives the Levitate versatility as far as the pace-range is concerned. It’s good for the long runs without any sluggishness. 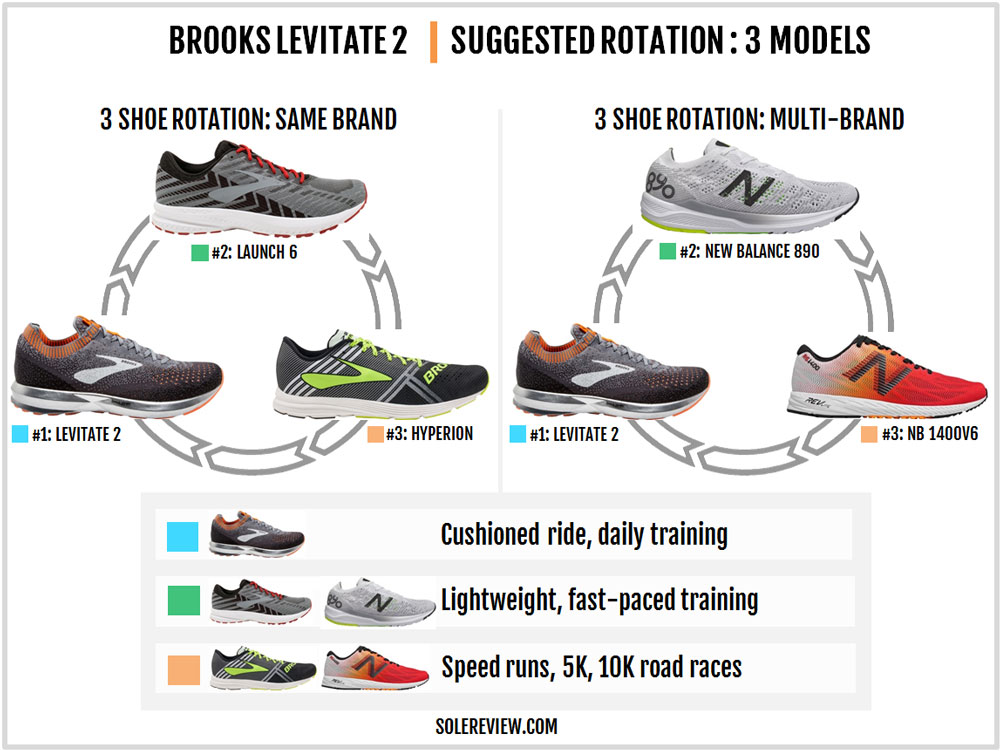 If you factor its weight, it becomes clear that the Levitate isn’t the best shoe for races or even speed runs. We suggest that you look at models such as the Brooks Launch 6 and the Hyperion for speed training and races.

The Reebok Floatride Run Fast and the New Balance 1400V6 are a couple of other options. 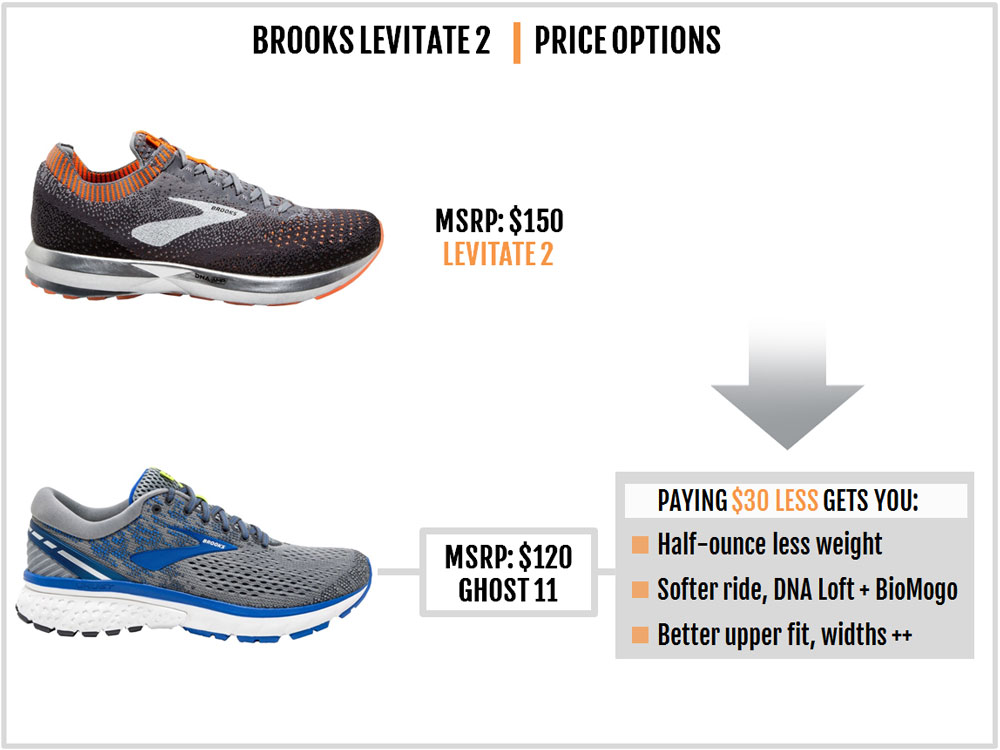 And if you simply want a cushioned daily neutral trainer from Brooks, then the Ghost 11 is the logical choice. It’s an ounce lighter and has a better upper-midsole weight distribution. 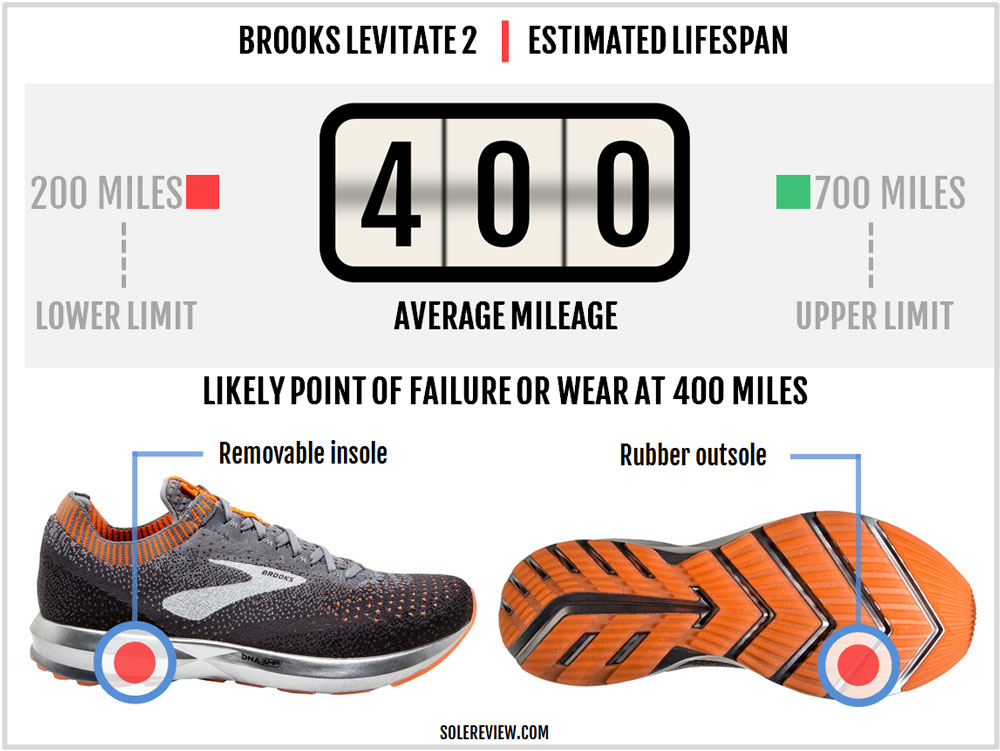 The Levitate has been in the market for a couple of years now and its durability has proven satisfactory – with a caveat, that is. The PU midsole has durable cushioning which lasts a long time. The translucent rubber on the V2’s outsole is slightly more durable than the V1.

There were stray reports of the DNA AMP midsole splitting into two after a couple of hundred miles. This happens when a small crack develops under the foot and the urethane skin can no longer protect the PU core from light and moisture. Polyurethane reacts adversely to both these elements when left exposed.

Even the midsole on our dissected Levitate 1’s on our midsole turned yellow after being in the open for two months. All we saying is – the chances of your Levitate splitting are slim, but it can happen to an unlucky few.

A few revisions have made to the Levitate 2’s upper. There’s a new heel construction which replaces the plush, foam-filled collar of the V1. Also, the midfoot no longer has the high-density printing and opts for a cleaner aesthetic.

Fit-wise, a lot has changed on the heel. The Levitate 2 uses a padded synthetic suede lining with a separate padded ‘pod’ near the top. The internal heel counter stops short of the Achilles dip so the top part moves freely. 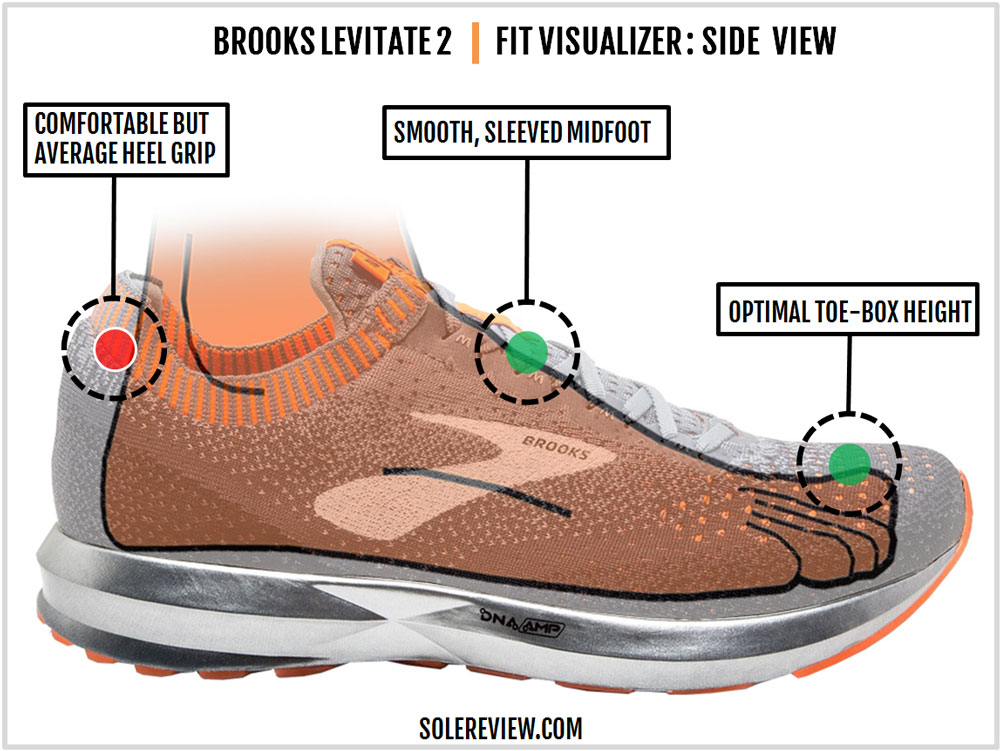 The collar is a band of stretchy knit fabric which connects to the lacing. Unlike the V1, the new Levitate lacks the last row of heel-lock lacing. The knit collar is the last lacing row; the ends form a loop through which laces can be passed.

When cinched tight, the collar band forms a snugger loop below the ankles. But does this work? Not as well as the traditional collar. Unlike the plush collar edges, the elastic knit collar works independently of the heel.

So when you ‘tighten’ the laces, only the stretch panel closes around the foot. If you ask us, Brooks made the heel fit needlessly complicated for the sake of newness. 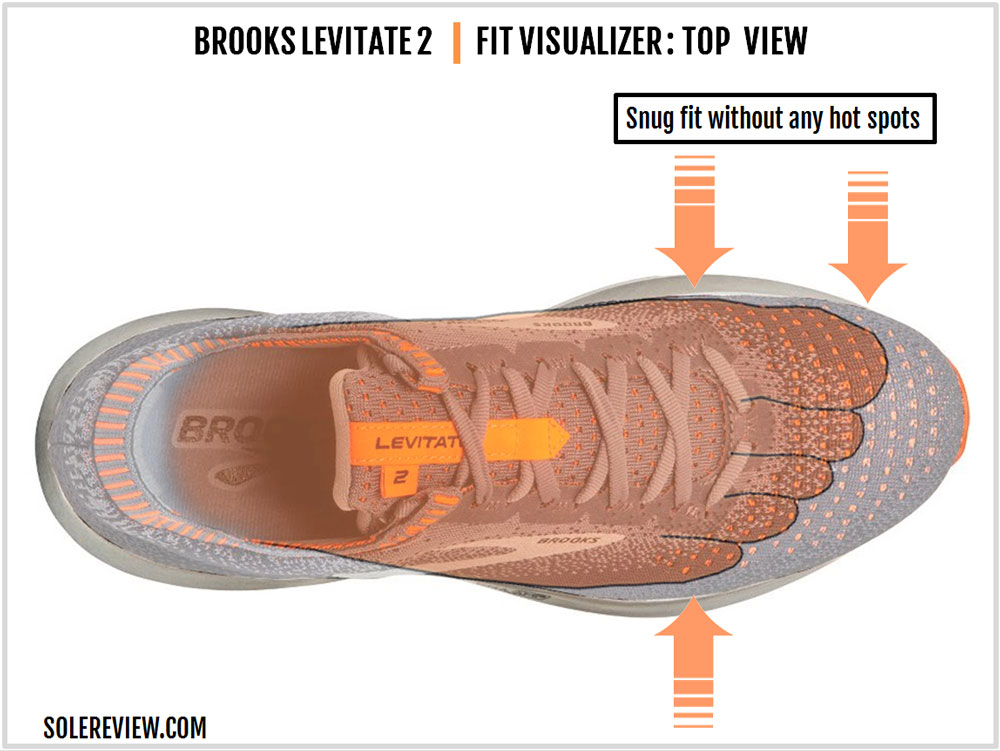 Except for the upper mesh change, the midfoot and forefoot fit the same as before. The tongue is attached to the upper so the interiors are smooth without any slide. The flat laces lie flush over the padded tongue and help dial in the fit.

The forefoot and toe-box fit snug as they did before, but without any hot-spots. There are no widths on the Levitate – only the standard ‘D’ in men’s and ‘B’ on the women’s model. 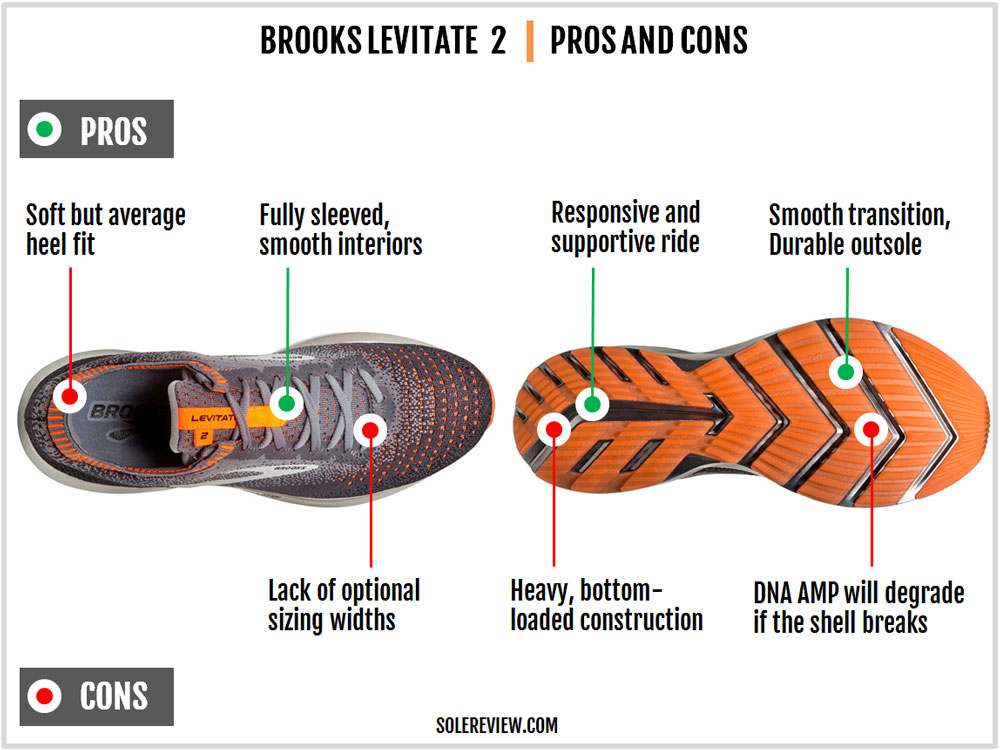 Outside Brooks, there’s nothing like the DNA AMP midsole on the market. The combination of the soft foam core and a resilient outer covering produces a ride with a lot of vertical rebound. The firm ride is also supportive, smooth, and efficient.

We have mixed feeling about the Levitate 2’s upper. On one hand, the sleeved upper fits smooth and secure through the mid and forefoot. Conversely, the heel doesn’t fit as well as it should.

The knit band, synthetic suede pod, and the integrated loop set-up feels gratuitous. Optional widths aren’t sold for this model so that docks a couple of more points too.

At 11-ounces, the Levitate 2 is heavy, with most of the weight felt in the midsole and outsole. 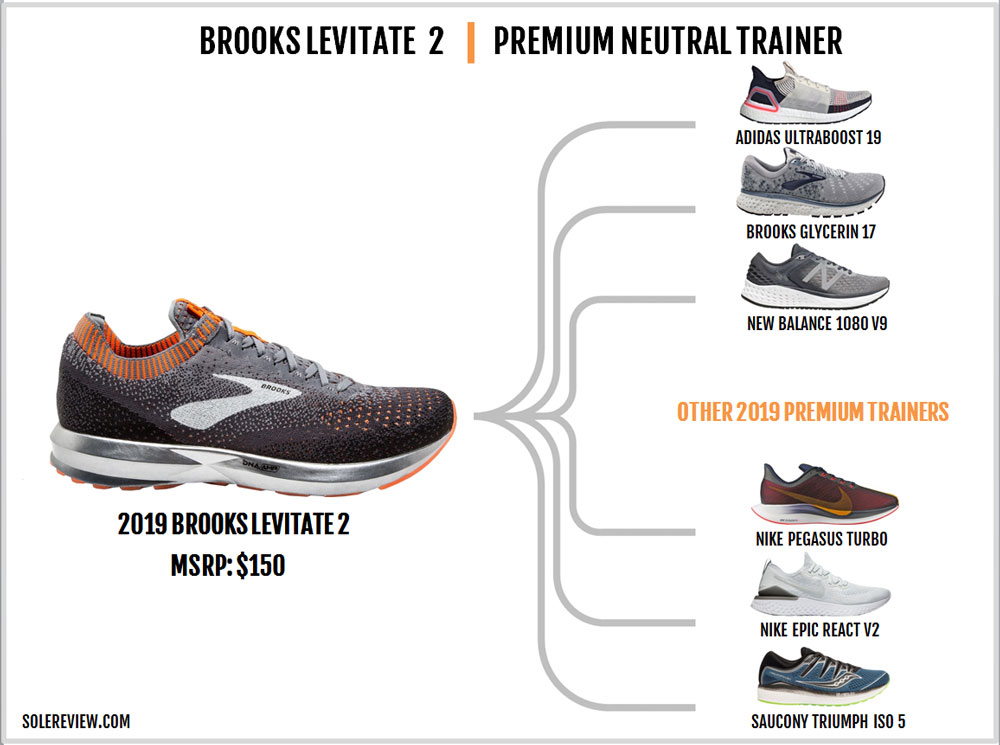 Except for the Brooks Bedlam and the Ricochet with their part DNA AMP midsoles, there are very few models which have the Levitate’s linear responsiveness. There’s a good reason for that; no other neutral trainer pack their soft foam inside a harder shell. At the same time, we’ll try to give you a fair idea of the other neutral shoes in the $150 to $180 price segment.

The standard adidas UltraBoost and the Ultraboost 19 are much softer shoes with a snug upper. Both are lifestyle-leaning models, so if you’re looking for a higher level of performance, buying the much lighter Nike Epic React 2 or the Pegasus Turbo a good idea.

The Saucony Triumph ISO 5 provides a dense and supportive cushioning underneath a plush upper. With a much softer ride and a comfortable upper, the New Balance 1080V9 is vastly improved version of its past self.

If the Levitate’s bottom-heavy build and less than perfect fit doesn’t work for you, Brooks also sells the Glycerin 17. It’s a plush and smooth riding neutral trainer with the supportive DNA-Loft midsole at a $150 price tag.

Buy from Brooks
.Buy from Amazon