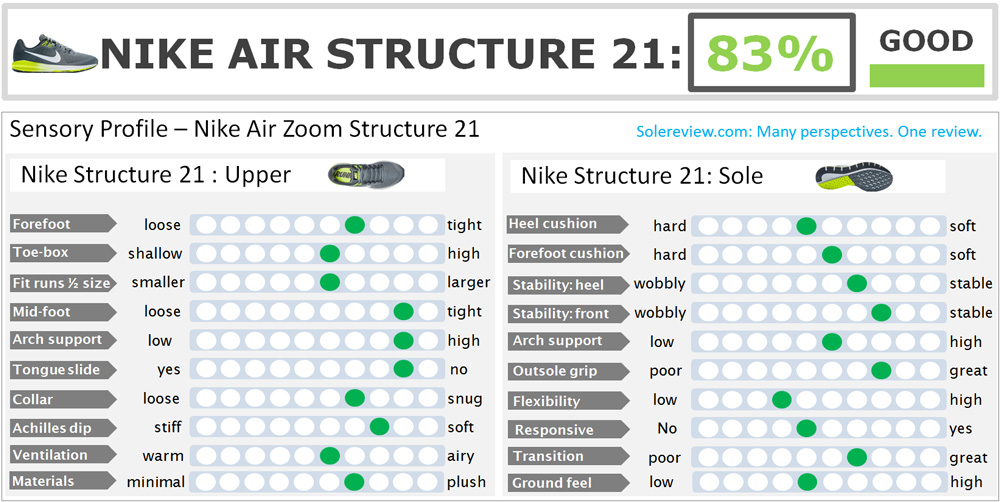 The Structure received much-needed updates to its ride quality last year, and all of it carries over to the 21. The upper gets upgrades like the new mesh with a softer feel and better ventilation, along with redesigned Flywire cords and flat laces.
Smooth transitions, outsole grip on dry surfaces, supportive upper fit, balanced ride, responsive forefoot
Unresponsive rearfoot, lack of reflectivity, the tongue and heel could do with more padding 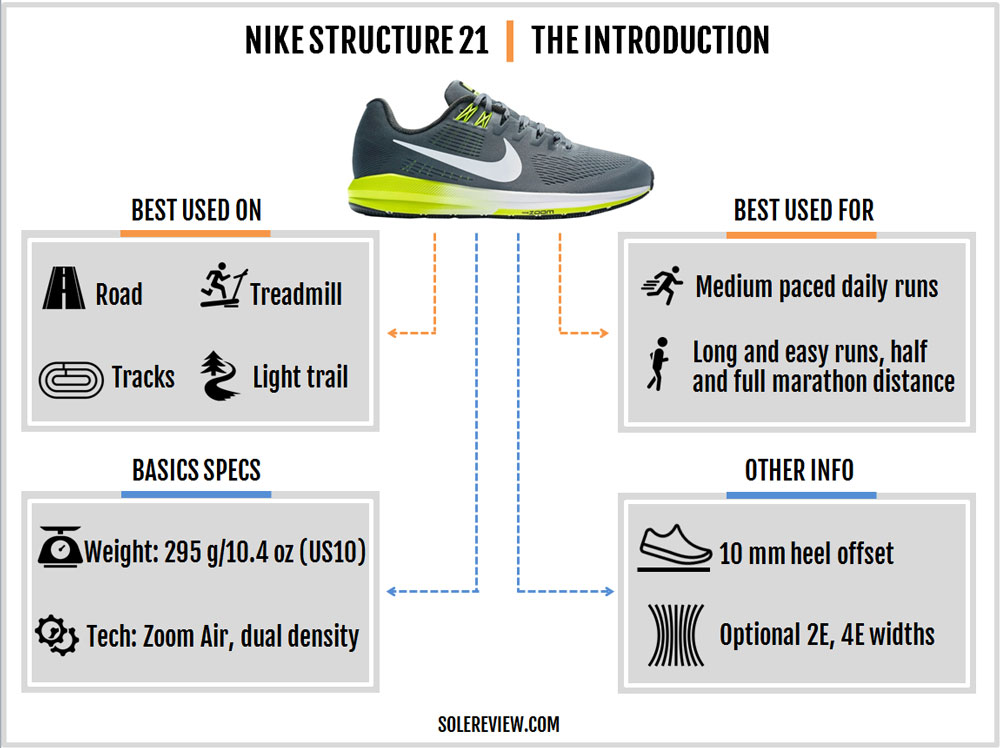 The last year’s Structure 20 was an improvement over the 19. Coming to think of it, this should be the case with each update. But given the long lead-times involved in the design and delivery of a shoe, a new model isn’t necessarily an improvement over its older version.

Luckily for us, the Structure 21 happens to be a better version of the 20 as well. Nike’s flagship support/stability shoe retains the same midsole from last year, so all the updates are made to its upper. What we have as a result is a Structure which is an ounce lighter and breathes better.

The Structure is Nike’s support shoe with a traditional design. This means that the dual-density midsole has a very firm inner side and a slightly less firm outer side. The Structure 20 balanced the two different levels of firmness extremely well. The Structure 21 has an identical midsole, so the ride exhibits the same qualities. 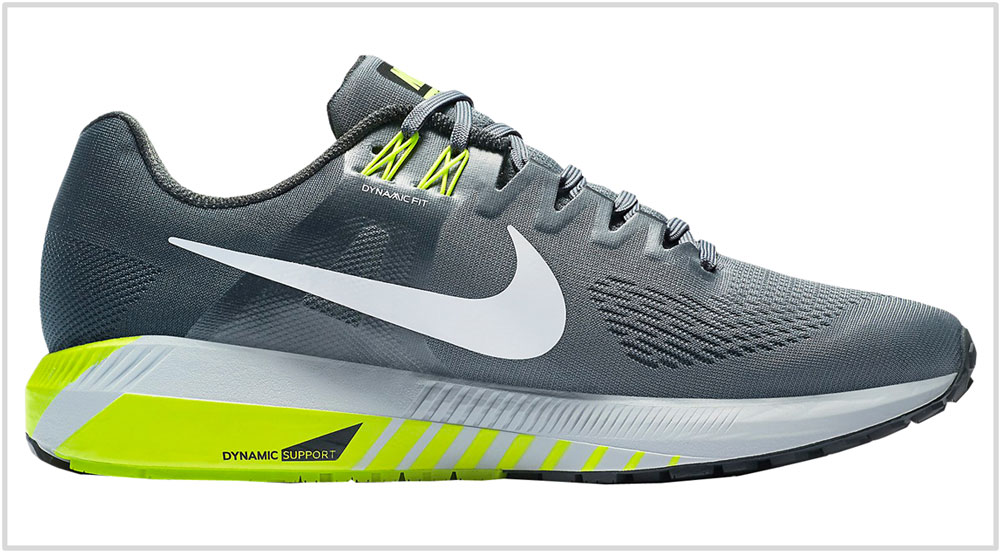 If our memory serves us right, the Zoom Structure 18 was the first Nike running shoe to feature Flymesh. This upper material is made of a single layer of engineered mesh and borrows aesthetics from the Flyknit.

The first Flymesh version used on the Structure was very thick with a relatively coarse hand feel. When combined with an inner sleeve, the S-18’s upper had limited ventilation properties.

The Structure 21 still has Flymesh (as did the 20), but uses a new and lighter version. Nike says that the new Flymesh uses mono-filament yarns which reduce weight yet retain structural strength. The weight claim is true – the Structure 21 sheds nearly a full ounce over the 20.

There are other subtle changes, all of them for the better. The upper has larger vented areas. The forefoot breathes better, and so does the rearfoot which now gets vented sections over the Flywire cords.

The lacing panel and the Flywire areas are now reinforced with a thinner and transparent laminate which also helps reduce weight. 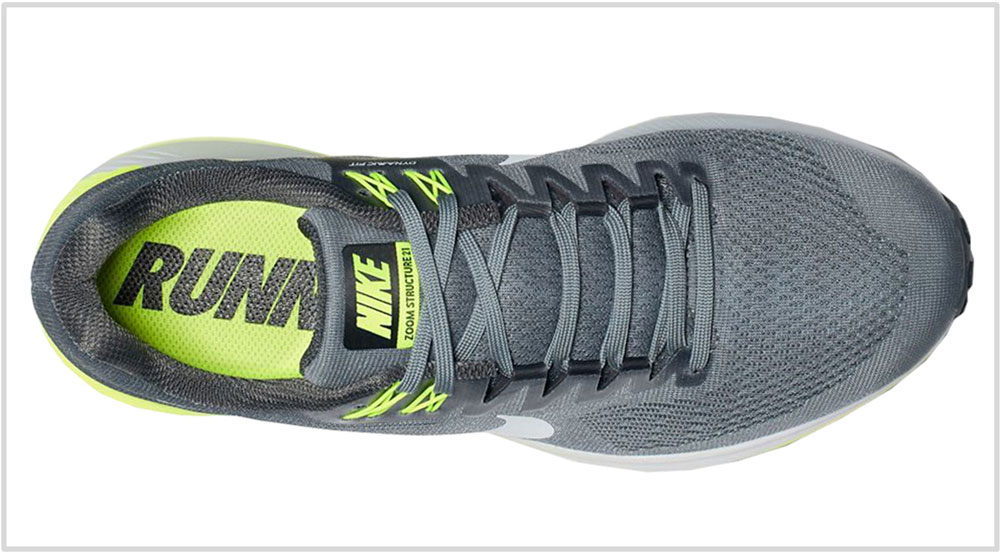 The laces are now flat instead of round. These flat laces pass better through the strap-based cinching system. The Structure 21 uses a strapping system (or the internal ‘arch-band’ in Nike-speak) which was also used on the 20.

An inner sleeve is attached to the tongue, so the arch-band strap is sandwiched between the outer upper and the inner sleeve.

For reasons best known to Nike, the Zoom Structure has rarely had a plushly padded tongue or heel lining. Thankfully, the Structure 20’s tongue quilting is nowhere as bad as the Structure 18.

Both the tongue and heel are moderately padded. However, runners who’re switching to the Structure from brands such as Saucony and Brooks will notice the utilitarian feel of the Structure.

The heel has a hard counter which is non-collapsible, and the toe-box has a flexible internal bumper.

Each fall, Nike releases an assortment of running shoes with water-resistance properties and reflective elements. This is called the ‘Shield’ pack, and the Nike Structure is also available in this variant. 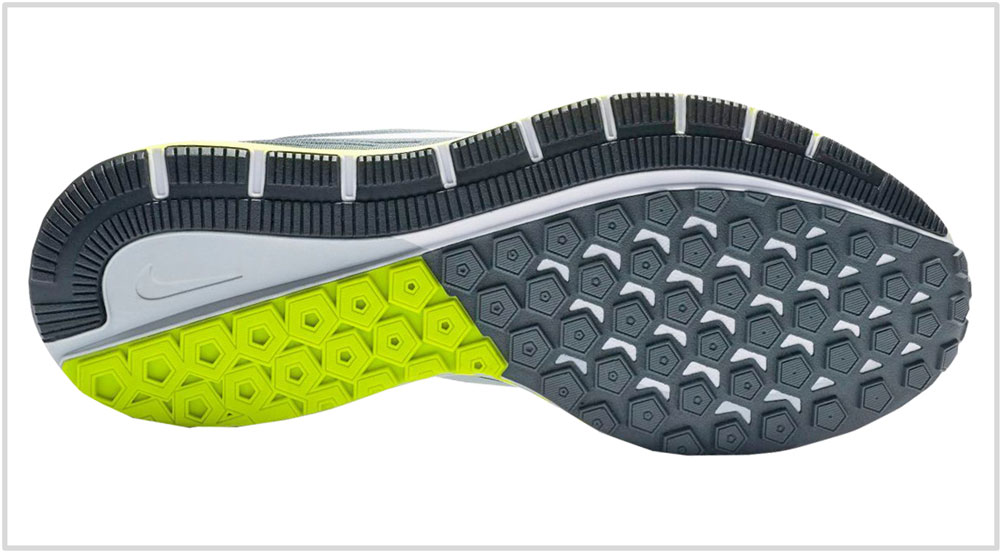 The Structure’s midsole design has gone through a raft of changes recently. Just over a couple of years ago, the Structure had a quad-density midsole. This included three foam densities of the main midsole, plus the hard stabilizer underneath the arch.

The Structure 20 simplified the design by toning down the medial post and reducing the number of foam densities to two.

This update got rid of the overly skewed ride behavior of the Structure 19. The new design was also easy on the foot, as the under-arch lost the pointy feeling. Nothing has changed on the midsole this year as the Structure 21 carries forward the same design.

From the outside, the Structure 21’s midsole appears to have more than two densities. But that effect is produced by the midsole paint rather than separate foam sections.

The outsole rubber is laid out in a familiar format. The outer side has the ‘crash rail’ strip with multiple flex grooves, a design first used on the Pegasus 31.

The inner outsole is populated with a colony of pentagonal lugs. The rearfoot has a shallow cavity exposing the midsole foam; this extends to a transition groove which splits the outsole longitudinally. The forefoot has an internal Nike Zoom Air bag.

The blown-foam insole is removable and identical to the Structure 20. 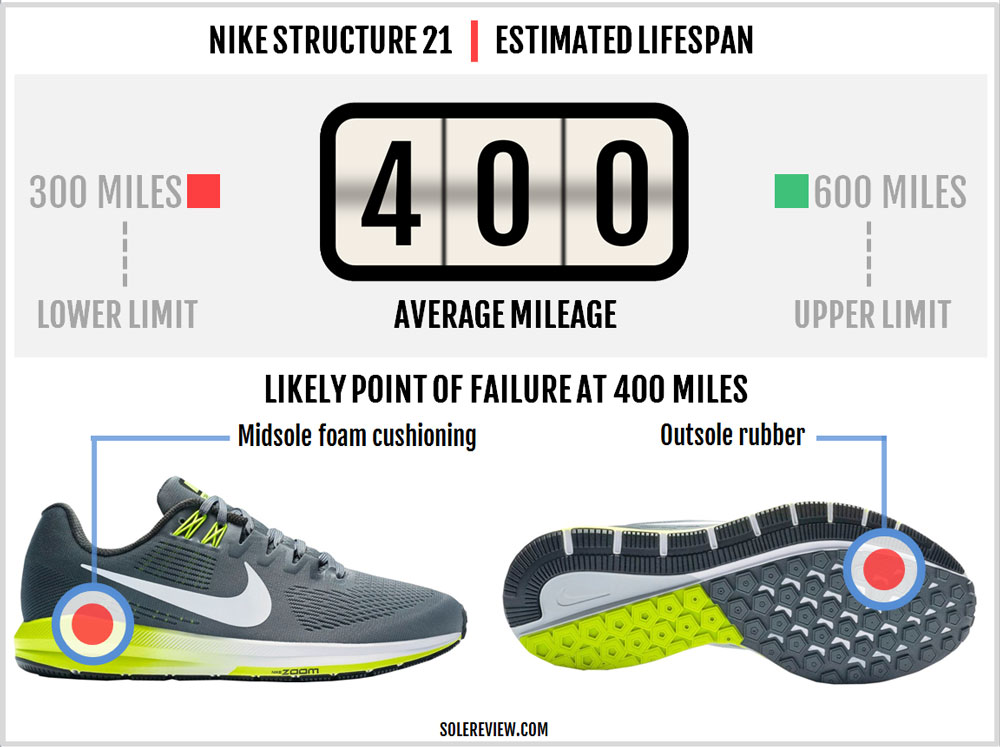 There’s plenty of outsole rubber, the midsole is relatively firm, and the upper is sleeved and double layered. These attributes help make the Structure durable.

Expect 400 miles of life from the Structure 21, with the wear and tear of the midsole cushioning and outsole happening in a gradual fashion. 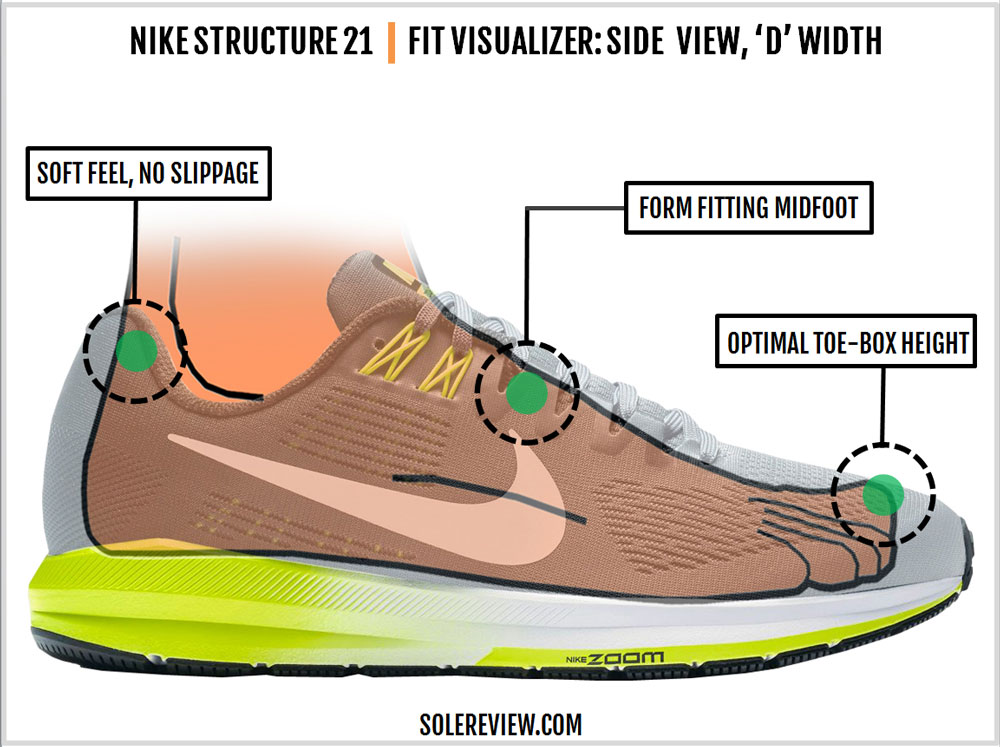 The Structure lacks the generously padded heel of other Nike models like the Lunarglide or the Vomero. So runners who are used to a plush collar might find the Structure’s heel a tad basic. Regardless, no slippage occurs during runs.

The rest of the upper fits beautifully. The midfoot fit is far superior to the Flywire-based cinching of the Structure 18 and 19. 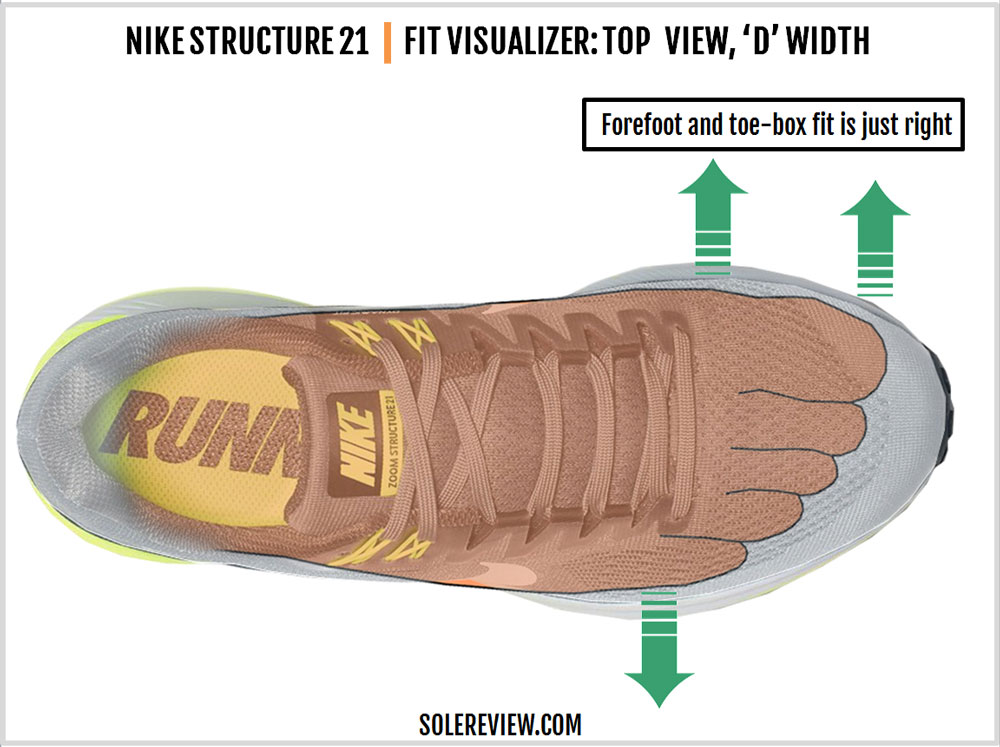 The inner straps hug the foot closely, and the newly introduced flat laces pass smoothly through the eyelet straps. Flywire is restricted to the rear, so that takes care of the pressing sensation against the midfoot.

There’s plenty of room in the toe-box and forefoot and the fit is true to size. The Structure also comes in multiple widths (2E and 4E) in case the standard D width fits narrow.

The Structure 21 has a softer interior feel than the 18, 19, and 20 due to the updated mesh which also has better breathability. 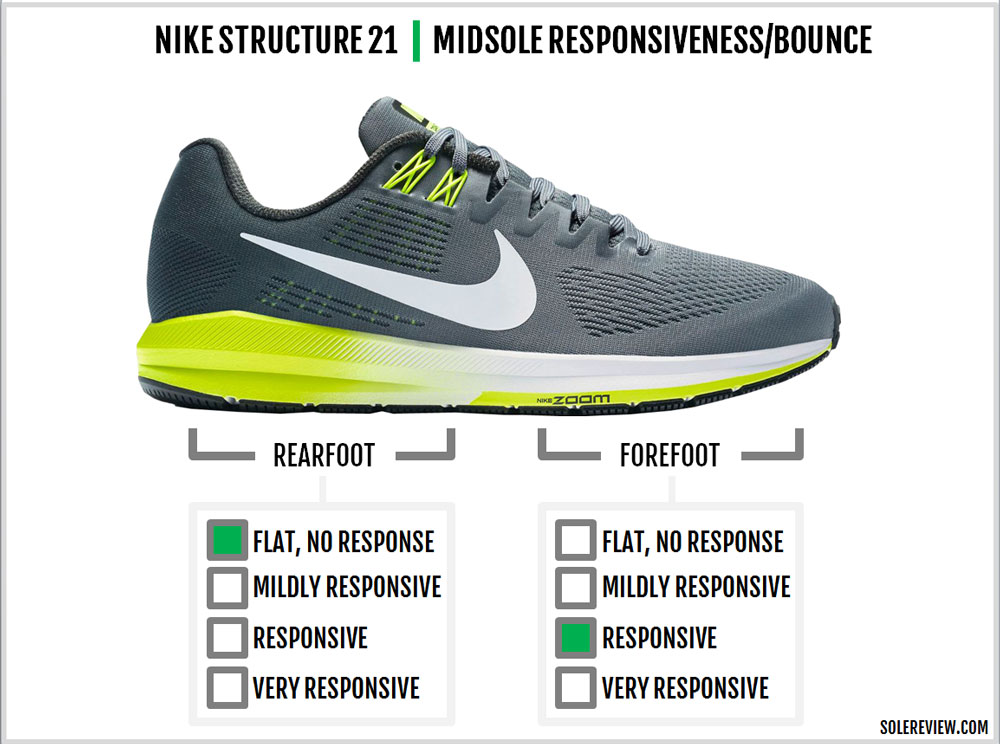 The Structure 21’s ride character has a split personality. Though rigid, the forefoot feels springy due to the large Zoom Air bag. However, the responsiveness isn’t apparent at walking speeds. It’s only when you pick up pace do you get the full compression effect of the Air bag. And needless to say, forefoot strikers will benefit most from the Structure 21’s midsole construction.

The rearfoot rides flat because there’s nothing there except for the dual-density foam and the outsole. Though the open foam area below the heel plus the removable insole helps with the cushioning, the rearfoot is noticeably firm. 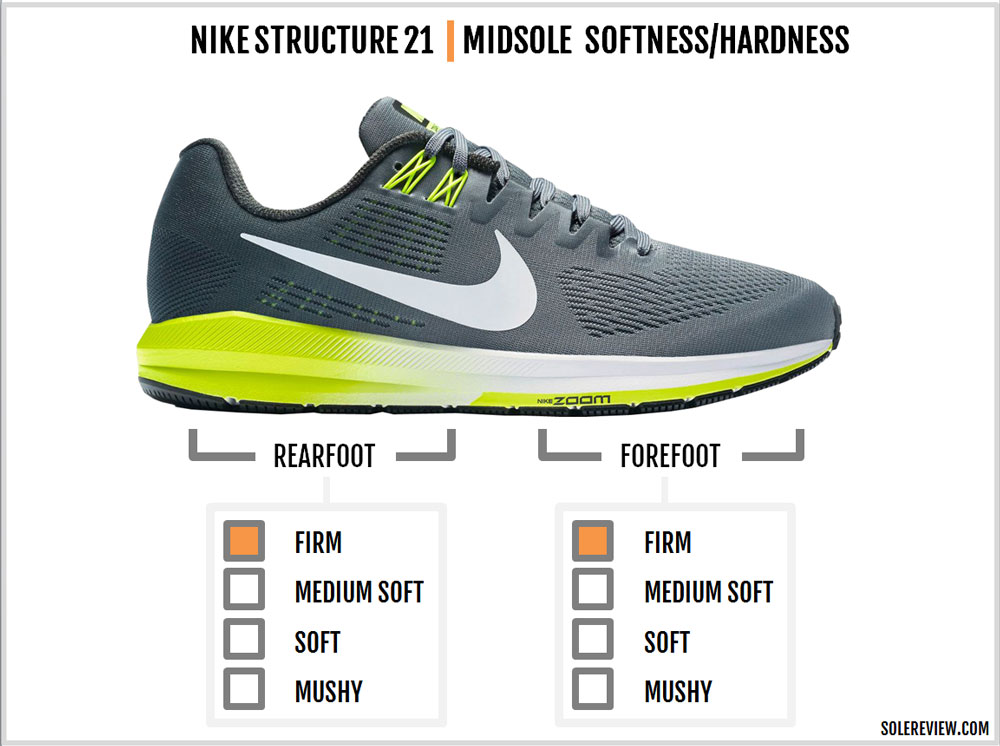 If the Structure’s firm ride isn’t an issue, you can use it for longer training runs and even marathons. The midsole firmness also makes the Structure a fast training shoe. The outsole lugs grip well, so track use is also enjoyable.

The excessive outwards bias or lean of the older Structures (17, 19) is no longer present on the 21. The rearfoot has a bit of an outer bias due to the midsole groove and the beveled heel, but only slightly so.

The firm ride quality is distributed evenly from heel to toe, so the progression feels smooth and efficient. The outsole also has the center groove and the side ‘crash rails’ with multiple grooves – features which also assist transitions.

In case if you found the last year’s Structure 20’s ride to be hard on your feet, consider the list of alternatives at the end of this review. 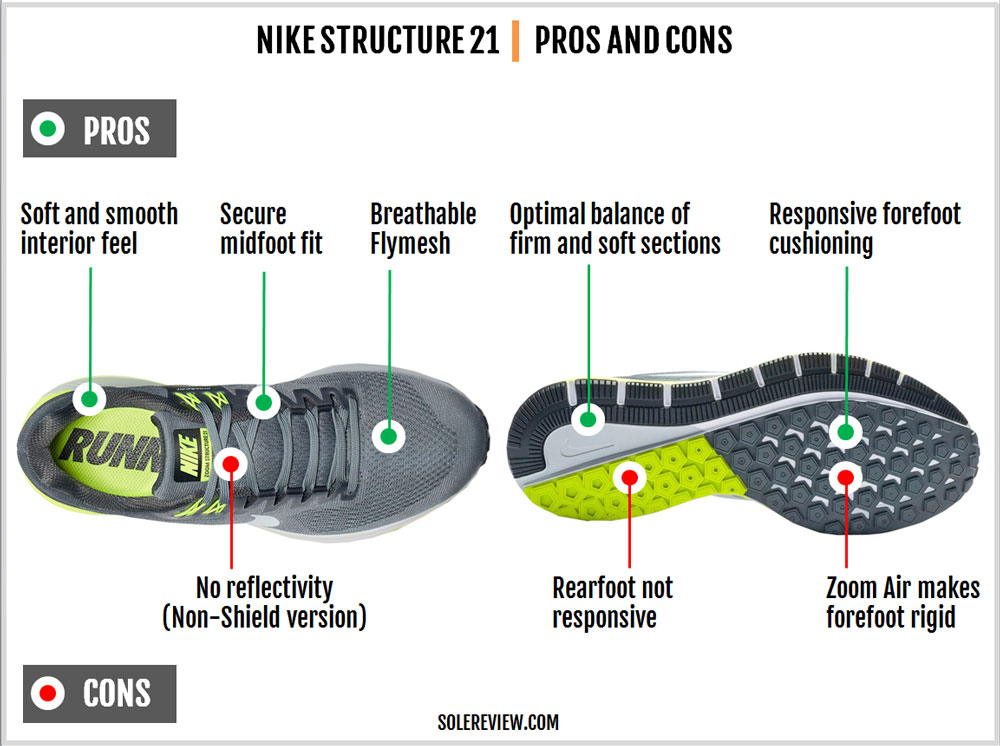 The Nike Structure is all about balance. The upper has smooth interiors and fits well. The inner strapping system which was re-introduced on the Structure 20 finds its way into the 21, and that’s a good thing. The Flywire cords are restricted to the rearfoot, and this means that the midfoot is secured entirely by the straps.

Ventilation is improved on the 21 due to the new fabric, and the optional widths help you choose the kind of fit you want.

Forefoot strikers will find the ride to be very responsive due to the large Zoom Air bag. Conversely, heel strikers will experience a flat and unresponsive rear-end. A Zoom Air bag also makes the forefoot stiff so runners who want a flexible shoe should bear this in mind.

Given the overall firm nature of the midsole, the ride is fairly supportive. Unlike some of the older Structure (17, 19) models, the 21 has minimal ride bias towards the outer side.

The ride quality hasn’t changed at all, so the upper gets all the new updates. That being said, all changes are design and material related. Little has changed in how the Structure fits.

Changing the engineered mesh to a lighter and vented kind leads to a significant weight reduction. The Structure 21 is nearly an ounce lighter than last year (for a size US 10). Minor improvements have been made to the laces (flat instead of round) and the Flywire cord placement. 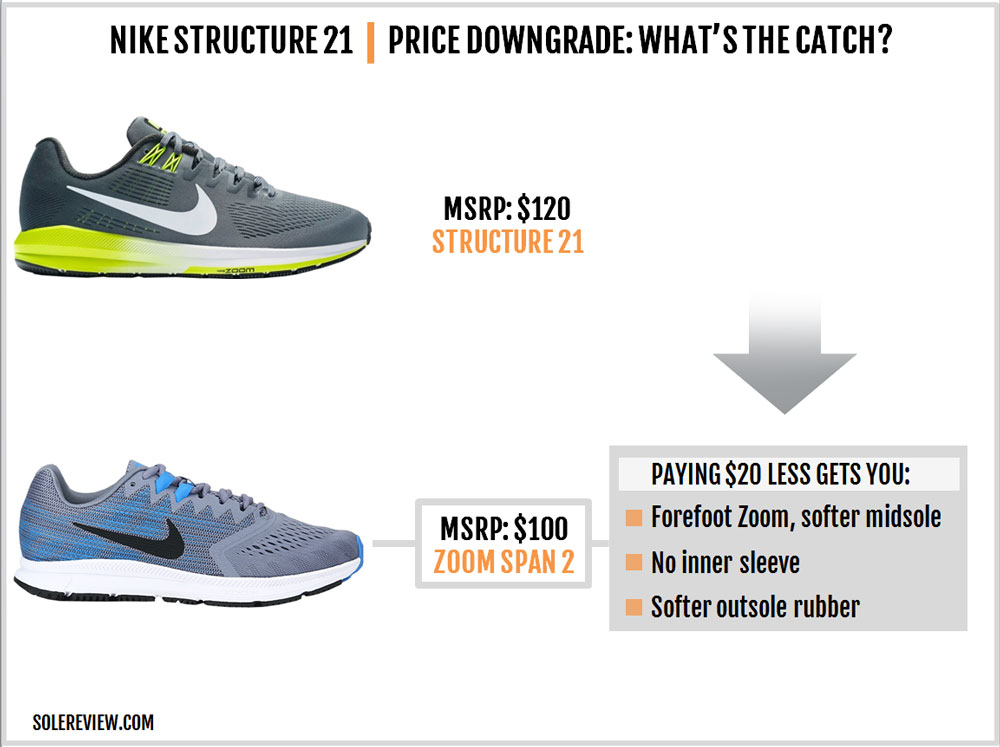 We had our work cut out for us last year because the Odyssey 2 was the perfect upgrade path from the Structure. This year, the Odyssey is gone so the only way is down. If you don’t require Structure levels of support, then you should look up the Nike Zoom Span 2.

The Nike Zoom Span 2 is much nimbler shoe than the Structure while being cheaper and lighter. The midsole has a hint of support, and the upper feels fast trainer like. It is one of Nike’s most under-rated shoes which also happens to be great value for money.

The Structure has a firm ride, so the Lunarepic Low makes a good rotational choice as a softer shoe. The ride is cushioned yet supportive, making the Lunarepic suitable for longer runs. The upper has a narrower feel due to the Flyknit upper.

The Streak 6 is a lightweight Nike model fitting for shorter road races and distances for up to a half marathon.

Two shoes from New Balance complement the Structure 21 perfectly. The first is the newly released 1260V7 – a cushioned stability model. The second shoe is the 1500V3, one of our favorite road racers which combine lightweight cushioning with mild support. 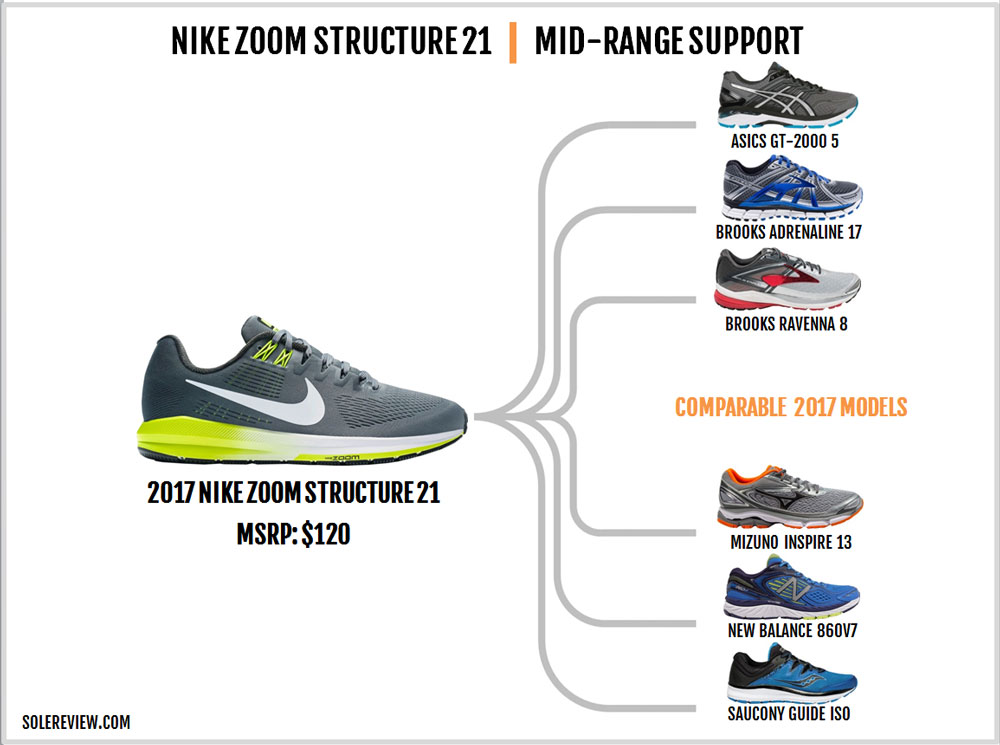 The Structure 21 is a support shoe with a harder medial post. For this reason, we’ll exclude products like the Nike Lunarglide or the adidas Supernova ST from this list.

Instead, what you see here are staple models which have long represented the mid-priced support category. The GT-2000 5 (now going on 6) is Asics’s stability shoe with a medial post (Duomax).

Saucony replaced the Guide 10 with the Guide ISO. The latest Guide gets an updated (and sleeved) ISO upper while retaining the medially-posted midsole.