New Balance’s marketing pitch: The 880V7 is designed to support you for the long haul.

If you're looking for a do-it-all neutral running shoe, the 880 should be on your shopping list. A smooth-fitting upper and a just-right midsole firmness come together to produce a versatile daily trainer.
Supportive ride, smooth transitions, outsole grip, multiple widths
Tongue slide, shallow toe-box 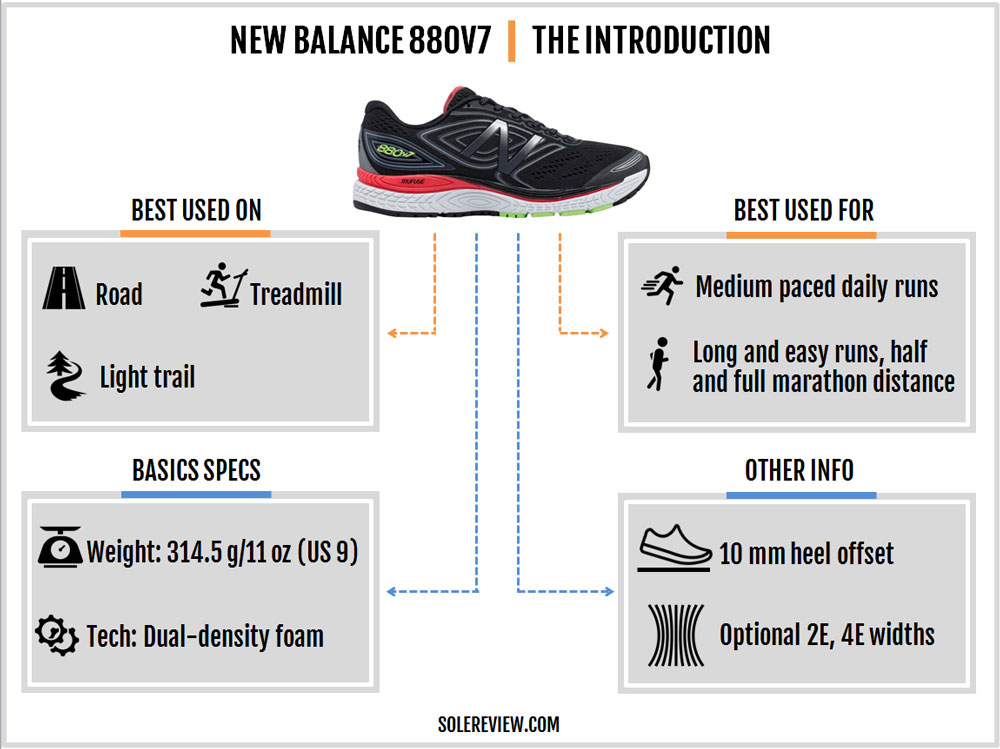 Running shoes such as the New Balance 880V7, the 860, and the 1260 are a rare sight these days. They retain features from a time when shoes were built the traditional way. By which we mean multi-density midsoles, detailed uppers, and similar elements of discovery.

This design approach is in stark contrast to how running shoes are built today. Thanks to the combination of manufacturing automation and rising costs, most shoes look deceptively similar. Today, the oft-seen design template consists of a bland knit or engineered mesh upper glued to a single-density midsole.

Even New Balance is doing the same with their Fresh Foam line. The 880V7 represents a dying breed, so grab one while you still can. But first things first – what is the New Balance 880V7?

The 880V7 is a mid-priced neutral cushioned trainer. If you’re familiar with the 860, then treat the 880 as its neutral counterpart. In the days of old, the 880 used to be a lower-priced version of the 1080.

But the 1080 transformed from this to this, so the 880 is your best bet if you need a traditional neutral trainer from New Balance. 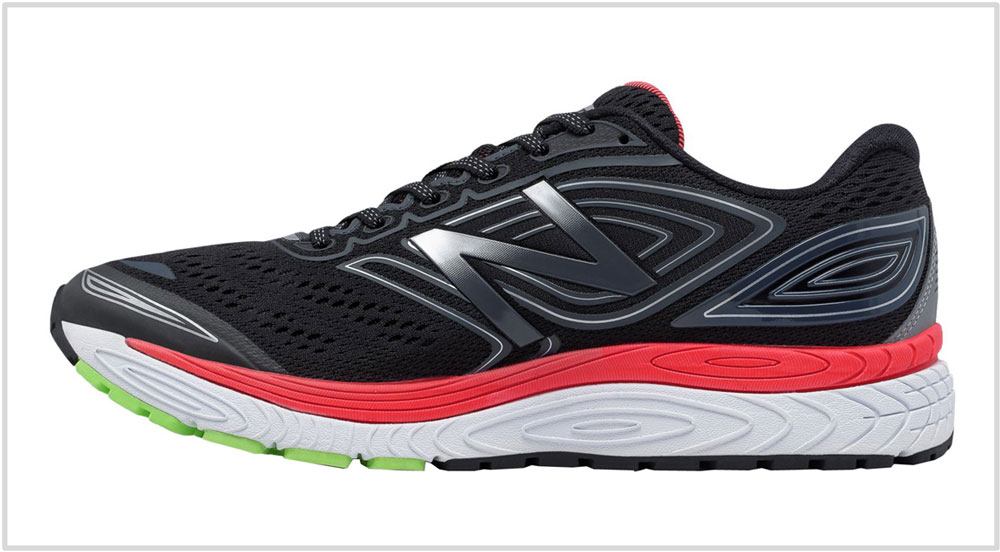 The updated upper is made of engineered mesh (a single piece of fabric with selective ventilation) with high-density printing over it. The toe-bumper is fused over the mesh, and the heel has a piece of synthetic stitched over.

This design is a significant update over the 880V6’s upper which had a stitched toe-bumper and a spacer mesh construction. While both the 880 versions describe their uppers as ‘Fantomfit’ – an upper with no-sew construction, the V7 uses updated materials.

Unlike Asics which is removing their logos from the inner upper, the 880V7 has the ‘N’ logo on either side – the same way the V6 did too. In other words, the 880 has design symmetry with an equal amount of detailing over the inner and outer side. 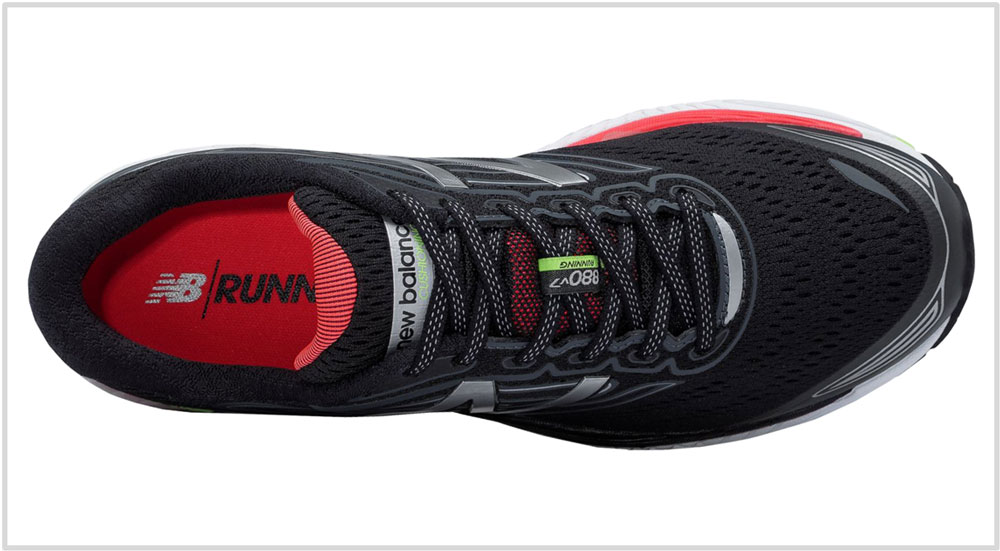 The tongue design is identical to what we’ve seen on the older 1080 and the current 860. There’s a piece of elastic attaching the rest of the tongue to the front. This allows runners to pull the tongue over the foot while lacing the flat, semi-elastic laces. Since there’s no inner sleeve, tongue slide will happen.

The V7 gets an updated tongue and heel lining package with a softer hand feel. The collar padding has ample foam which separates the foot from the hard internal counter.

And lest we forget, there’s a water-resistant Gore-Tex version of the 880 available too. 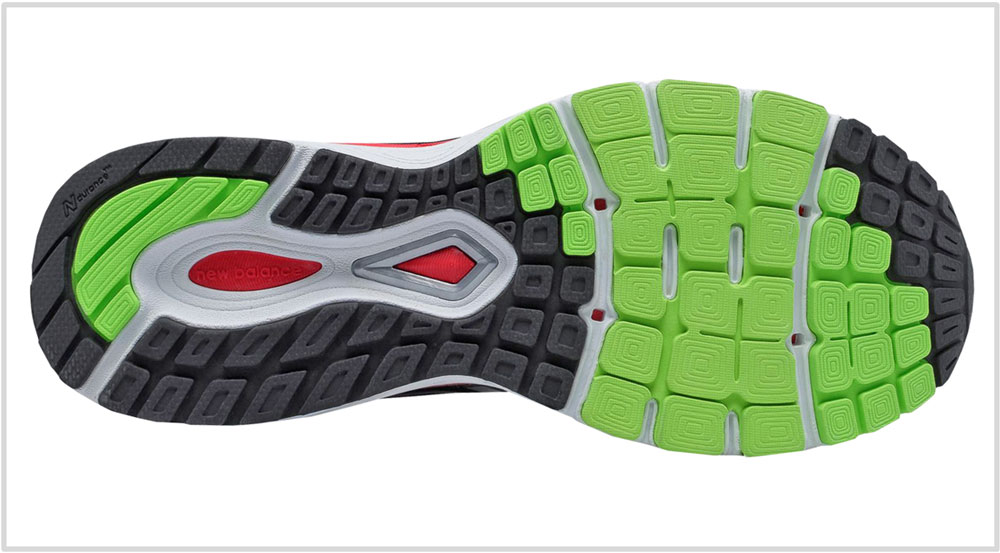 The midsole uses two different kinds of compression molded foam stacked over one another; New Balance calls this design Trufuse. The stacking is linear and full-length, meaning that both foams extend from heel-to-toe. There’s a plastic stabilizer which is located at the midfoot center.

There are two foam layers above the midsole. The first is the foam lasting below the removable insole. The latter is the same as the one in the 860V6 – a compression molded EVA insole.

It’s worth pointing out that New Balance changed their insole from  blown-foam Ortholite (on the 880 V5) to molded EVA last year. This is what you get on the 880V7.

The midsole doesn’t have deep grooves molded into its sidewall which can cause excessive lean on the outer side. The foam density isn’t overly soft and has a touch of firmness.

The 880 is equipped with a dual compound outsole. The forefoot has softer blown rubber and the heel has a harder material called ‘NDurance’. The outsole layout is nearly full-contact. Unlike the 860, there are no gaps underneath the midfoot.

While there are a couple of flex grooves, the 880 tends to flex right at the forefoot-midfoot meeting point instead of directly underneath the forefoot.

The heel crash pad is separated from the rest of the outsole by a deep groove. Note that the placement of the groove is now further away from the heel edge when compared to the V6, and this affects the ride quality. 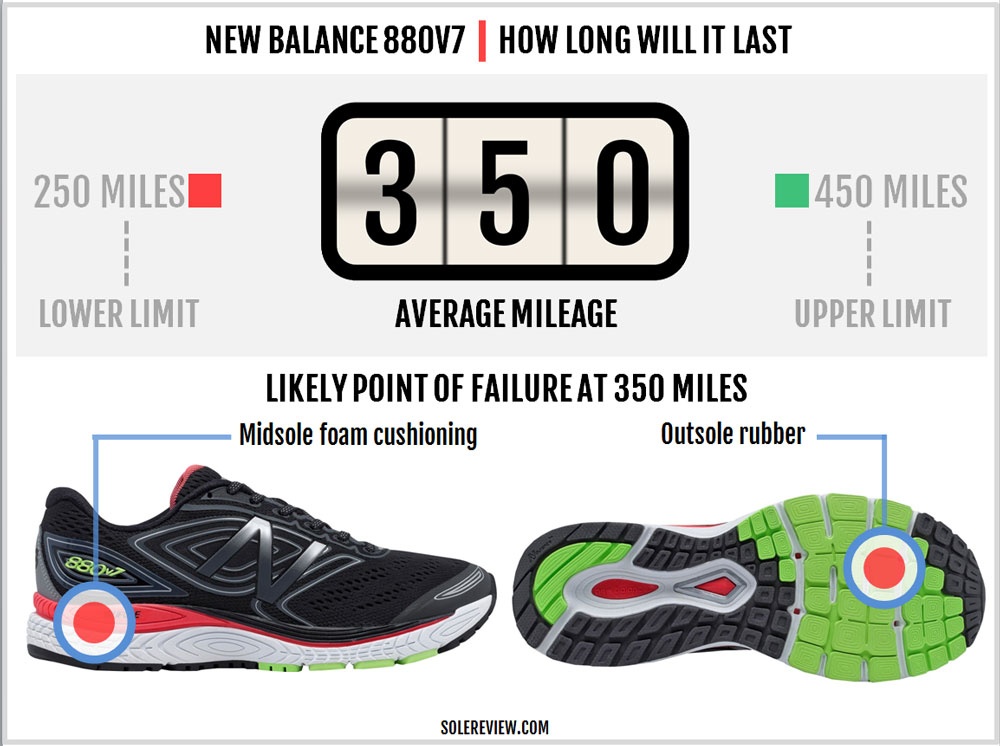 The 880 is a robustly built shoe with no parts likely to fail in the early stages of ownership. You’ll experience a gradual loss in the cushioning properties of the foam midsole over time along with the expected wear and tear of the outsole.

Till the V5, the 880 had a blown foam insole. While it had a plusher feel, the insole had the tendency to ‘pack’ much faster. The 880V6 switched to a compression-molded insole which turned out to be more durable than the Ortholite version. The V7 has the same insole. 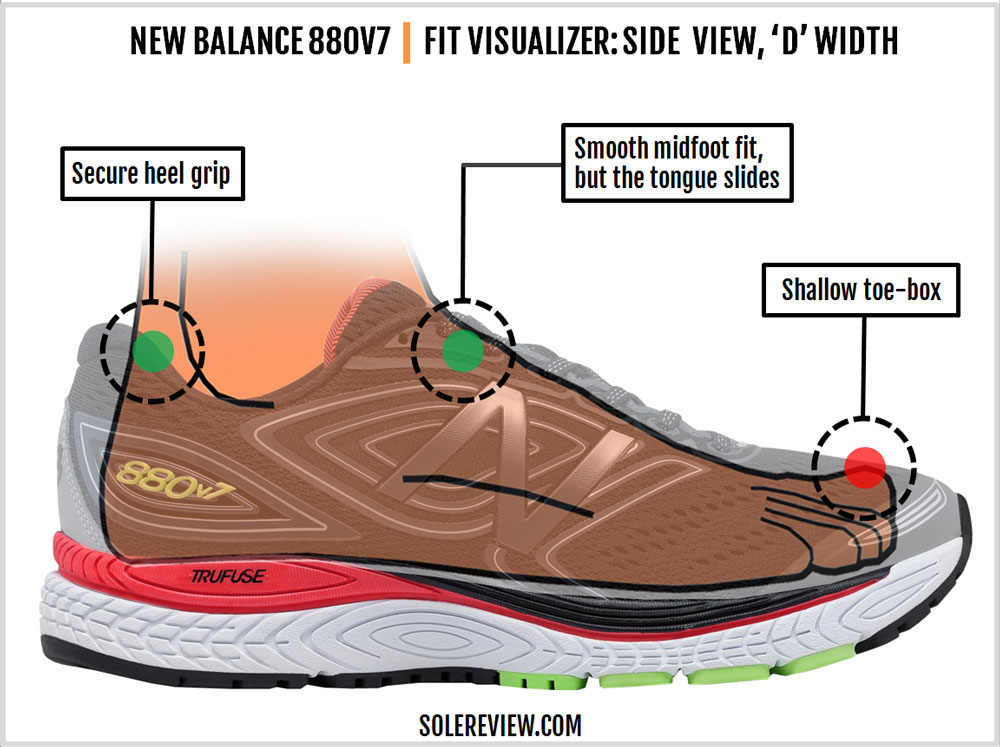 The 880 V7 fits noticeably shallow in the toe-area than the V6. The new fused bumper makes the toe-box shallow and narrow on the big-toe side.

Few brands get the fused toe-bumper template right. Unfortunately, New Balance comes up short, and so do brands like Asics. Saucony is the only brand which consistently nails the welded toe-box formula. Be it the Ride or the Kinvara, Saucony has got the welded bumper design down pat. 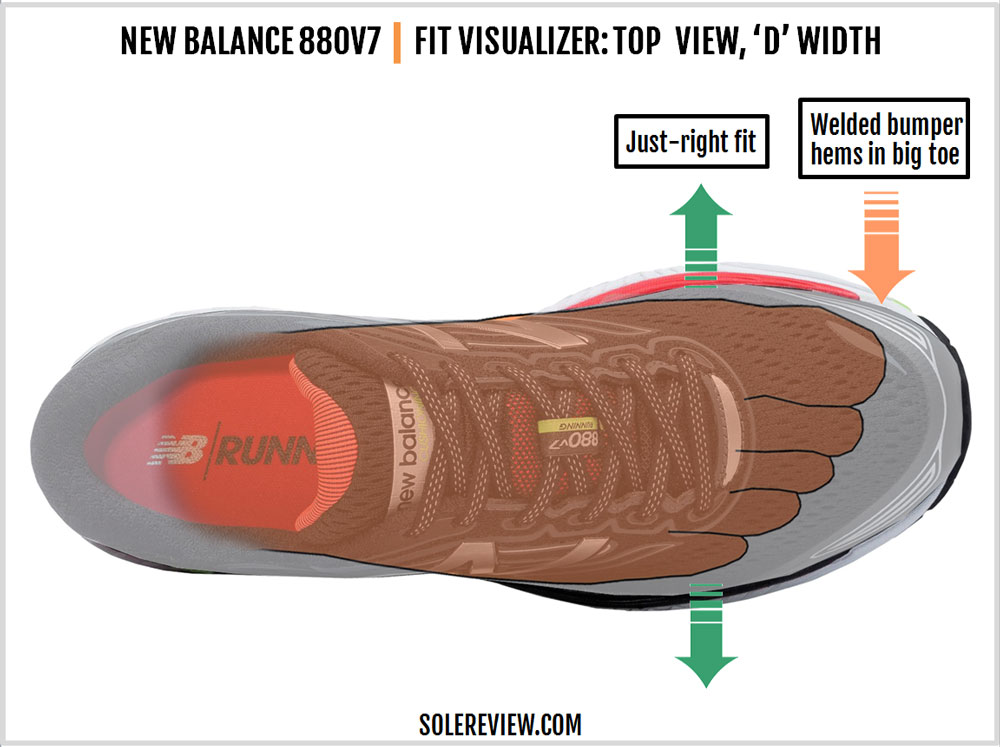 The shallowness of the toe-bumper makes the 880V7 fit slightly smaller (lengthwise) than the V6. Otherwise, the forefoot fit is just-right on the sides, and the heel has a secure hold. The foam quilting behind the heel and tongue lining add comfort to the interior environment. The engineered mesh upper breathes well.

The elastic in the front makes it easier to stretch the tongue over the foot. That said, the tongue tends to move around during runs and the center loop is of little help. 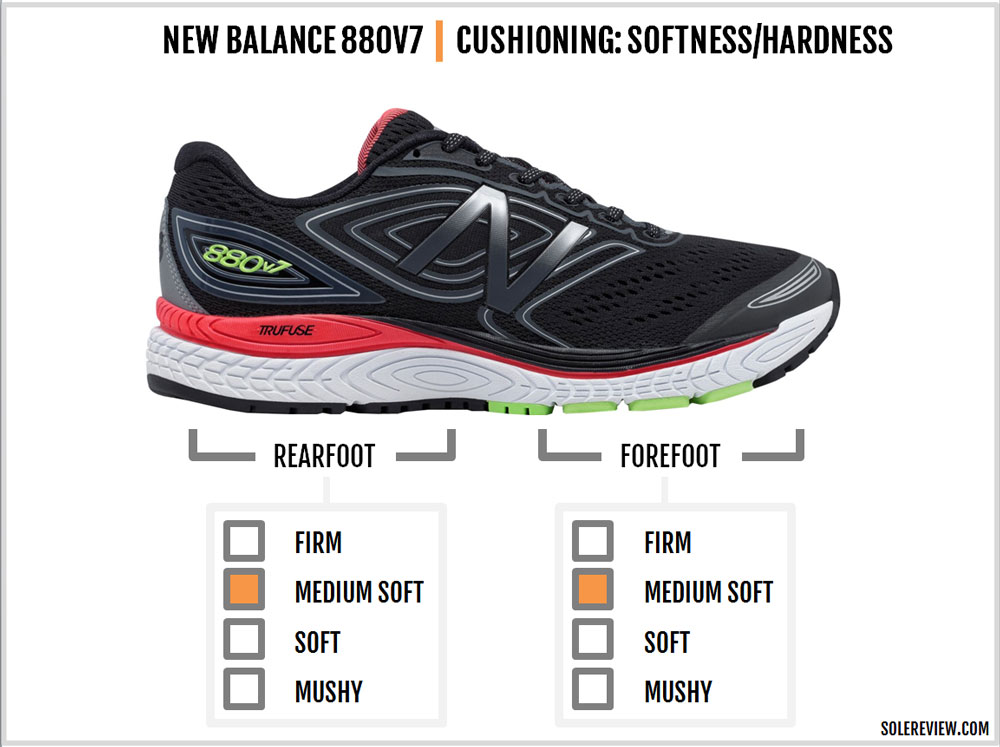 Regardless of the brand, neutral shoes from the mid-priced segment are seldom mushy. Most of the time, the ride quality is an optimal blend of cushioning and support. The 880V7 is no exception. The stacking of the two foams is done in a uniform manner, and this construction makes the ride consistent.

Given the 880’s 10 mm drop, the cushioning depth is heel-loaded – the stack of foam is the thickest there. As the midsole gradually tapers towards the forefoot, so does the level of softness. 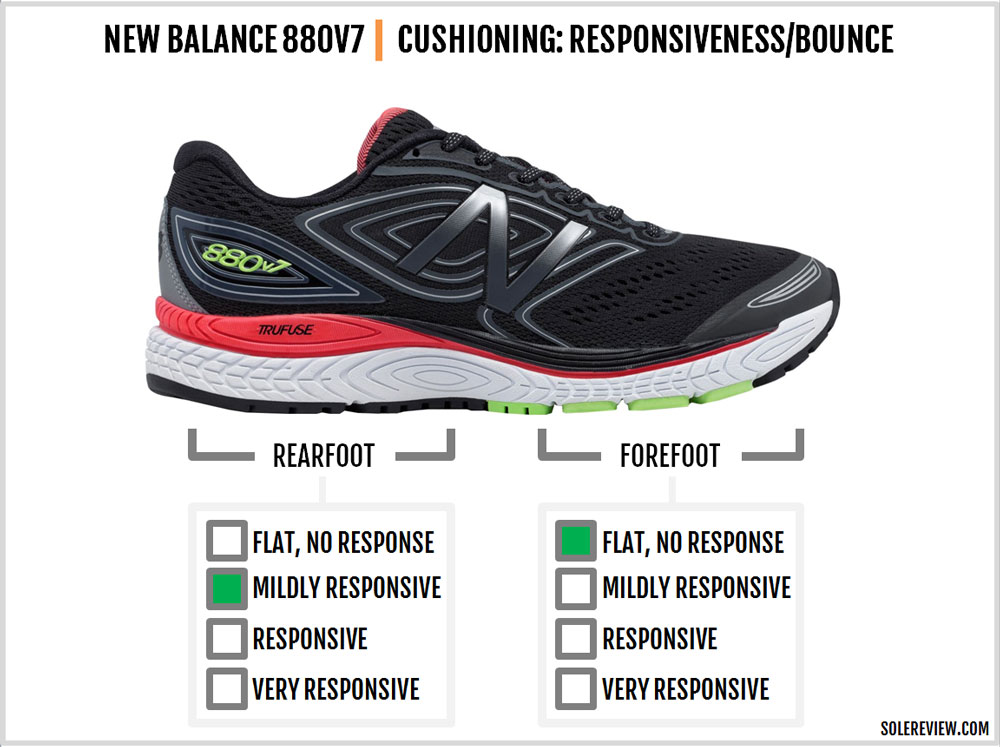 By no yardstick is the 880 mushy; medium-soft would be a good way to describe the cushioning. There is some amount of responsive feedback from the rearfoot due to the under-heel cavity and the compression-molded insole.

The tinge of firmness adds stability, and this trait also makes the 880 suitable for heavier runners who weigh more than 200 lbs/90 kgs. The supportive aspect of the midsole is also helped by the fact the sidewalls lack deep grooves capable of producing a ride bias. The full-contact outsole contributes to the smooth quality of transitions.

Unless you’re planning high-speed runs, the 880V7 is good for whatever you can throw at it. Marathons? No problem. Daily mileage? Works just fine. Just walking around? The medium-firmness and the generous outsole rubber coverage make the 880 suitable for walking.

The stacked midsole requires a break-in period, at least in the way the forefoot flexes. However, unlike Mizuno, the bedding in of components take a much shorter while – around 30 miles or so.

If you’re upgrading from the 880V6, you’ll notice that the V7 is slightly firmer under the rearfoot. This change isn’t due to the foam density but rather the crash pad design.

On the V6, the crash pad groove under the heel was closer to the edge. This meant increased flexing on heel strike, thus producing a higher sense of cushioning.

Forefoot strikers will not notice any change in the 880’s cushioning character. 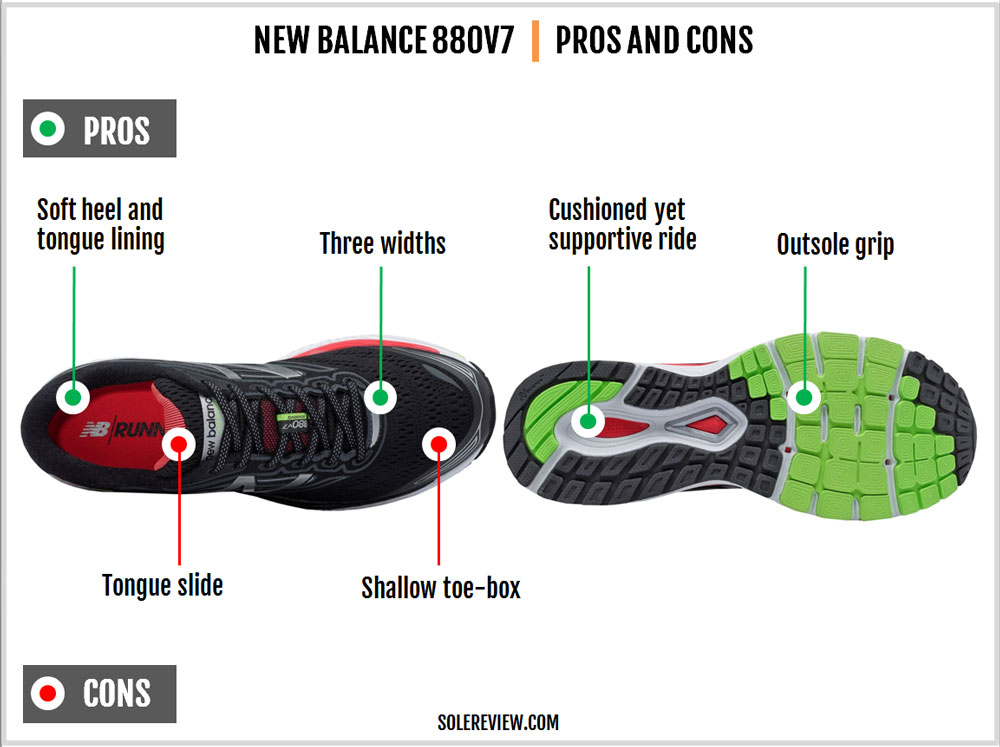 There’s much to like about the 880. The twin-stack of foam produces a cushioned, smooth, and a stable ride. For its price, the 880’s upper uses premium materials and a no-sew construction which creates a seamless interior. And like most New Balance models, the 880 is available in multiple widths.

Now coming to the part we don’t like. The welded toe-cap makes the toe-box area shallow and narrow. This wasn’t the case with the 880V6 which had a stitched toe-bumper.

The tongue slide is mildly annoying. New Balance should note that there are ways to keep the tongue from sliding even without using a sleeve. Mizuno achieves this with an ultra-wide flap, and Brooks has its ‘tongue-tied’ loop.

The New Balance 880V7 has all the ingredients which make a well-behaved neutral shoe. The 880’s cushioned and stable ride combined with a smooth-fitting upper gives it a well-rounded personality which is likely to please most and offend few.

Except for the shallow toe-box and the tongue slide, the upper is a comfortable place to be in. Use the 880V7 for a variety of runs, ranging from daily workouts to the occasional marathon. 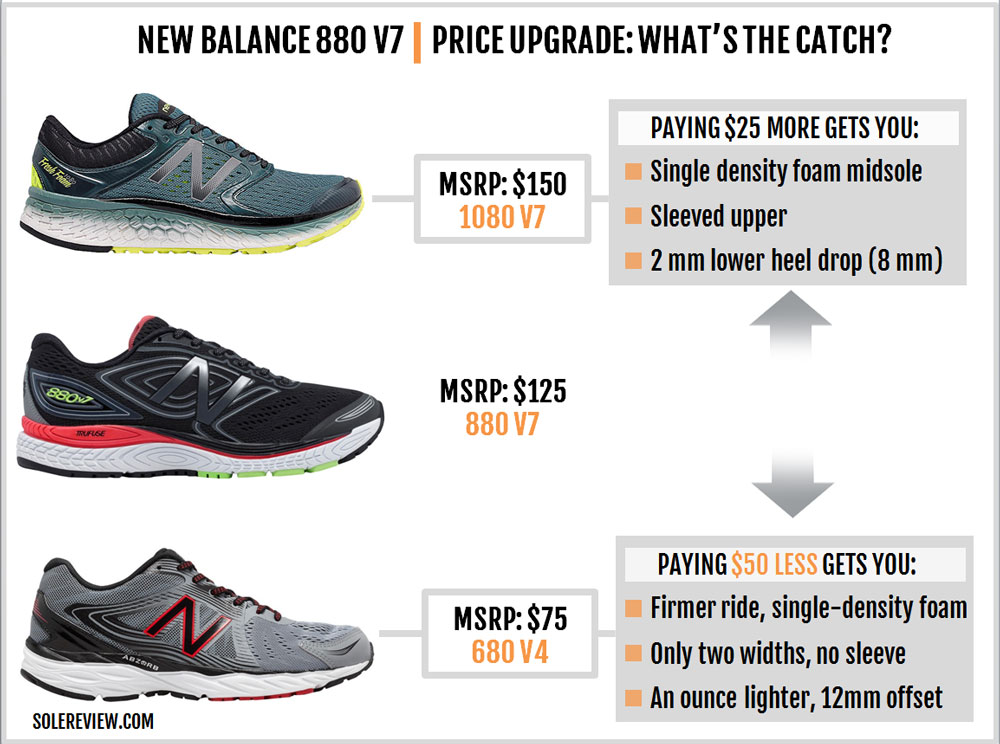 Though the 1080 and the 880 are from the same neutral cushioning category, both are very different shoes. At one point in time though, the 1080 and 880 shared common characteristics.

But Fresh Foam happened to the 1080 a couple of years, so comparing it to the 880 is no longer relevant. Instead, it makes more sense to treat the Boracay (the successor to the 980) as the 1080’s lower-priced alternative instead of the 880.

The 680V4 is an excellent entry-level trainer from New Balance. If you’re not comfortable spending triple-digit running shoe dollars, then give the 680 a try. 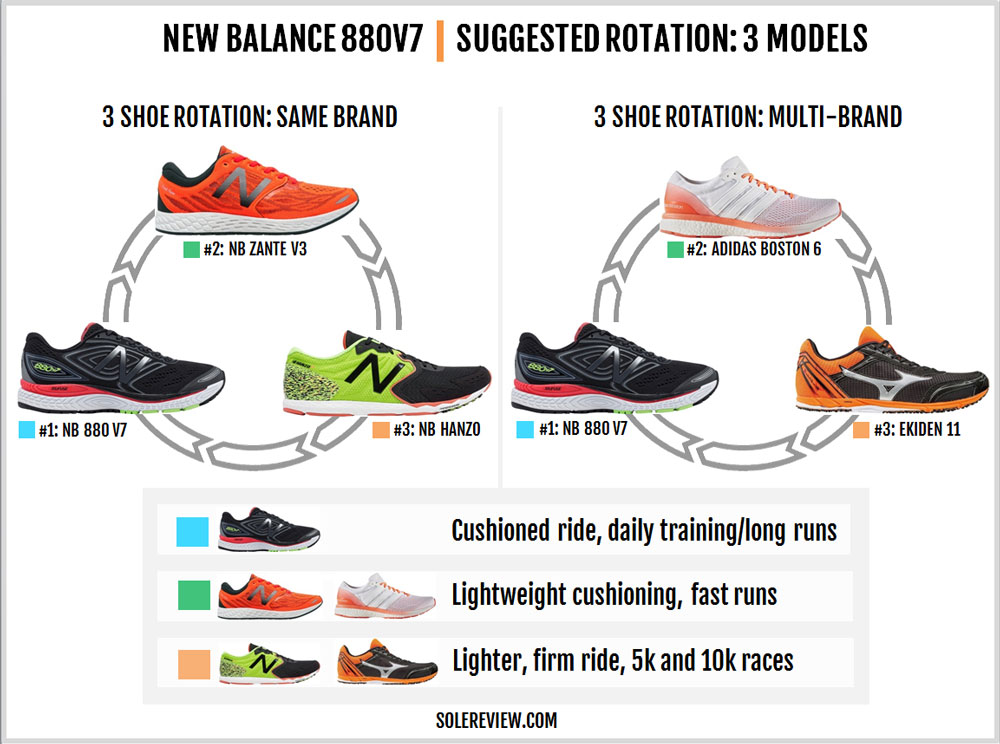 You have your daily trainer in the 880, so get the Zante V3 for faster runs and races. The Zante has enough cushioning to make it comfortable for up to half marathons. The adidas Boston 6 or the Asics Dynaflyte are other Zante equivalents.

For shorter races like 5K and 10K, the Hanzo flat works best. Outside New Balance, the Mizuno Wave Ekiden 11 is highly recommended. You can also consider the New Balance 1400V5 or the adidas Adios if the racing flats feel too hard on your feet. 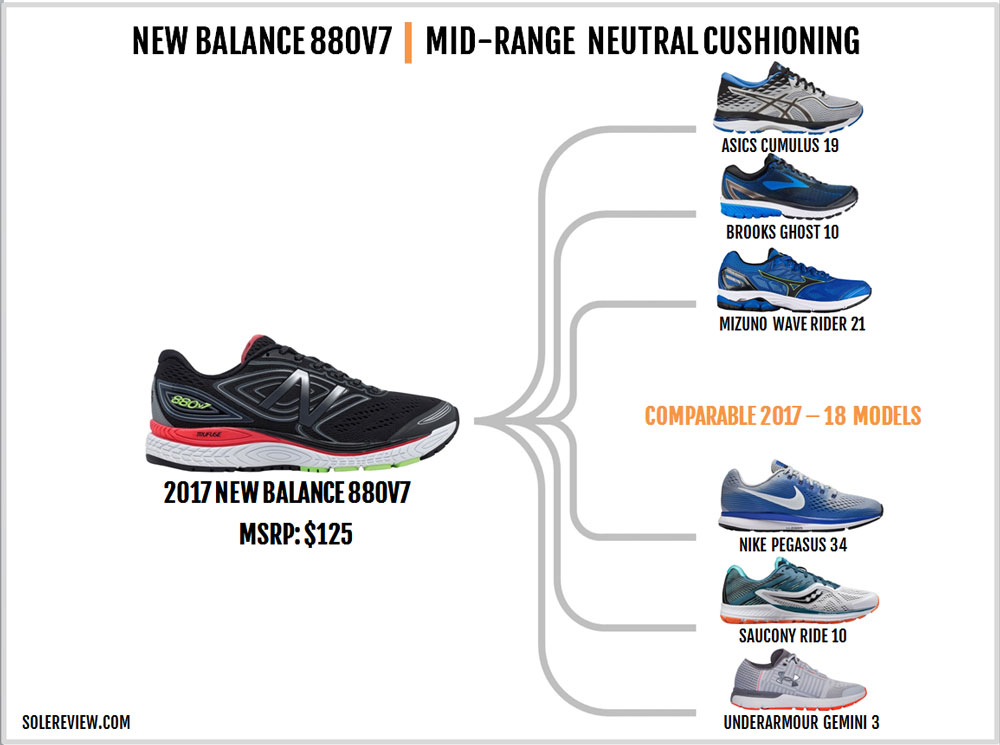 Within the mid-priced neutral running class, the Brooks Ghost 10 is the closest alternative. Like the 880, the Ghost comes with a dual-density midsole which delivers a cushioned and supportive ride. The Underarmour Speedform Gemini 3 also has a very neutral ride behavior.

The Pegasus 34 and the Saucony Ride 10 work great for slightly faster runs. The Pegasus is the most responsive and durable of the lot, and the Mizuno Wave Rider 21 is the most supportive.

If you’re an Asics loyalist, then the Cumulus is the brand’s neutral cushioning flag-bearer in this price category.