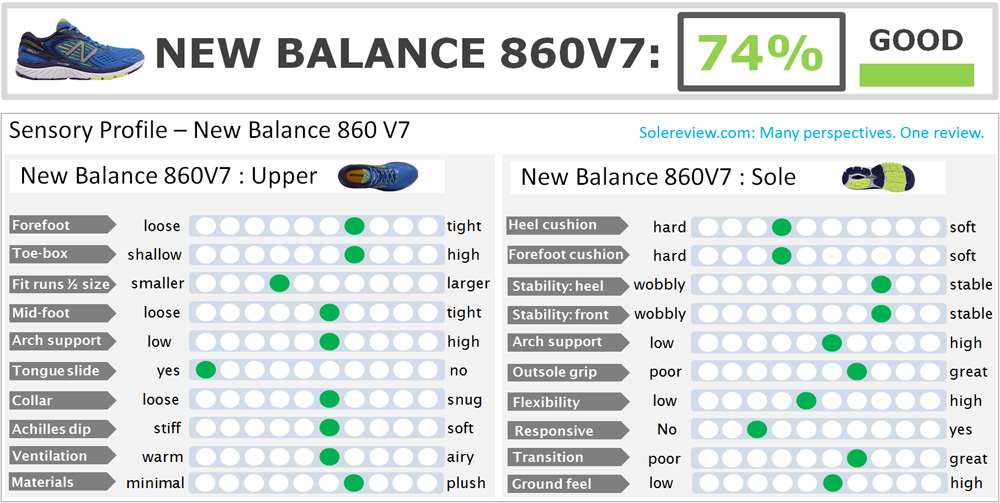 New Balance’s marketing pitch: A premium upgrade to one of our best-loved stability running shoes.

New Balance’s mid-priced support shoe gets updated, but then, not all changes are upgrades. The ride is much firmer - which can be a good thing or bad, depending on how you like your running shoe.
Supportive ride, efficient transitions, outsole grip
Severe tongue slide, heavy, lower-spec insole than the 860 V6 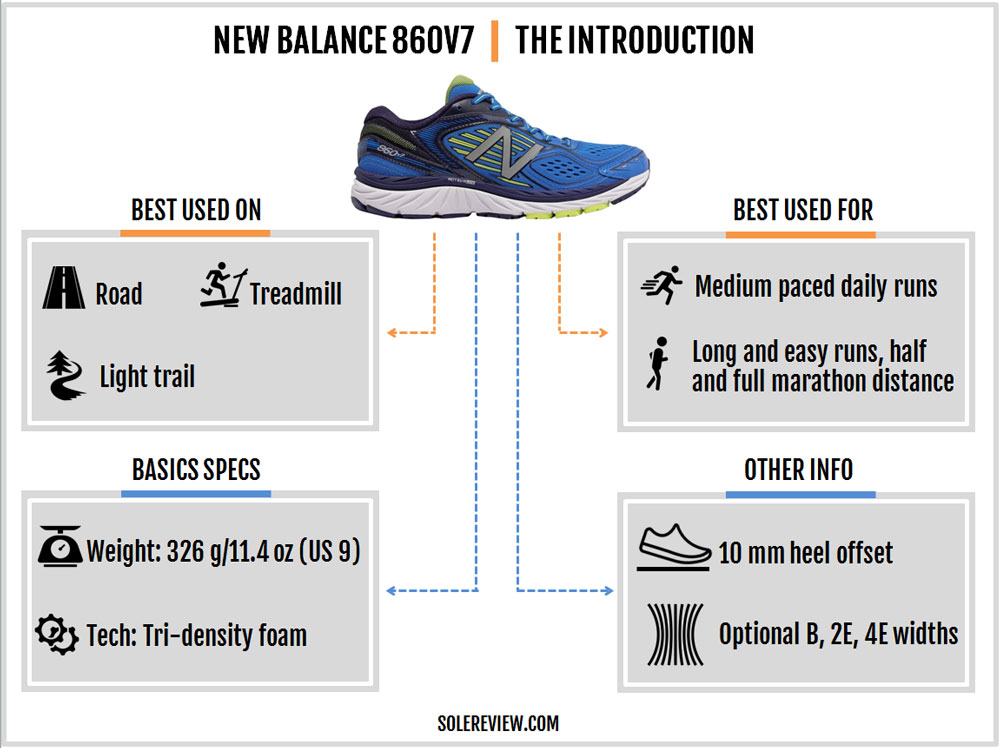 The evolution of the New Balance 860’s ride character has been anything but gradual. It swung from the noticeably skewed ride of the 860V5 to the relatively balanced 860V6 last year. The 2017 New Balance 860 V7 goes further in its quest for firmness by hardening its midsole over the 860 V6.

As most of you know, the 860 is New Balance’s mid-priced stability shoe. By featuring a firmer medial wedge, the shoe intends to deliver a higher level of support under the inner midsole than it does on the outer side. While this basic premise hasn’t changed, the way in which the 860V7 delivers it has.

For example, the 860V5 produced an extreme version of motion control behavior. The outer midsole was actually hollow, and the inner midsole was a section of solid foam with a medial wedge. This led to a noticeable skewing of the heel cushioning towards the outer side.

The 860 V6 did not have the hollow section, so the ride was relatively stabler. The 860 V7’s midsole relies on similar design fundamentals as the V6 while switching to new foam materials; this makes the ride firmer. The upper gets an updated cosmetic scheme without altering much of the 860 V5 or V6’s fit characteristics. 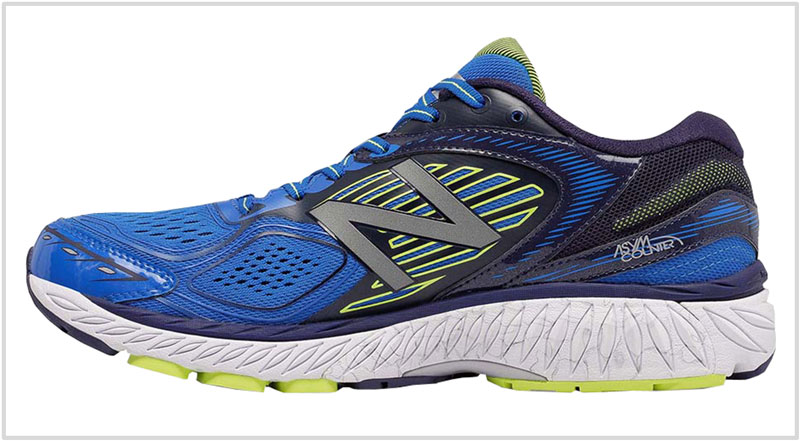 The upper is a mix of contemporary and traditional materials and construction. A stitched over toe-cap graces the business end of the shoe, and the thin no-sew layers add structural support and visual depth to the forefoot and midfoot.

At the rear, an internal counter makes the back part rigid. The internal heel counter is higher on the inner (medial) side than the outer side, and this is intended to provide a higher level of support on the medial side. This has been used on many NB shoes in the past, and we have demonstrated how the ‘ASYNC’ heel works in the pictures here and here. 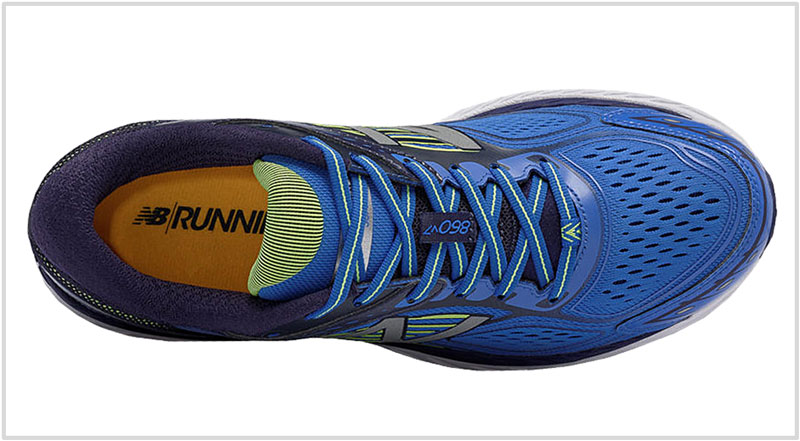 There’s no sleeve inside the 860’s upper. The tongue floats freely over the foot, and is attached to an elastic gusset under the first row of lacing. This allows the tongue to better stretch over the foot, but there’s an unfortunate ‘side’ effect.

The 860’s tongue has a severe case of sideways slide, so you’ll find the tongue burrowing itself in the lateral side within a few minutes into your run. Though the flat and elastic laces do not exert top-down pressure, having the tongue sit flush over your foot would have resulted in a much better fit experience. 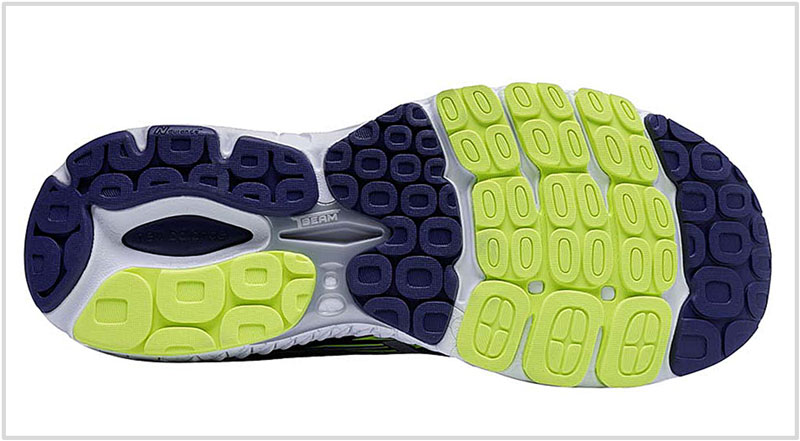 The new insole makes a huge impact on the ride behavior. The 860V7 is noticeably firmer than the V6, and that’s not just due to the updated midsole stack.

This change alone makes a big difference in how the new 860 rides. Sure, the midsole design has evolved too. The kind of EVA foam used – the New Balance Abzorb and Acteva Lite  – are the same but firmer in density.

The sidewall grooving is now tear-drop shaped and in a vertical orientation, unlike the 860 V6’s horizontal grooves. Both the factors – the density and molding – makes the V7’s ride a bit firmer.

The inner midsole has a hard medial post, which is the same as the prior 860 models. The upper midsole layer (the blue colored section) overlays the medial post, so that firm edge does not press into the arch.

Turn the shoe over, and you’ll be greeted with an outsole layout which looks familiar. The forefoot uses a softer and grippy blown rubber, and the rearfoot is protected with a harder compound.

Around the midfoot, there’s a plastic shank which New Balance advertises as ‘T-beam.’ But look past the similarities, and you’ll realize that the 860V7’s outsole comes with significant updates over the V6.

The most important change is that the forefoot no longer has two different kinds of midsole foam, like how it was on the V6. On the 860V6, the EVA foam layer on the top also extended to the bottom where it met the primary midsole foam. The V7 does not have this design. Instead, the upper foam layer is just that – limited to the upper area.

The 860 V7 also changes the forefoot lug design. The V6 had relatively flat slabs of rubber; the V7 uses a colony of rounded lugs. This improves the V7’s grip by a small margin. While there are plenty of flex grooves, the forefoot flexibility isn’t a lot because of the firmer foam.

All 860 versions the past few years had an exposed area of foam below the heel. This is meant to increase the cushioning sensation by means of compression splay. That said, this area has become progressively smaller.

The 860V5 had a large cavity which made it softer than the V6 and V7. The V6 shrunk the size of this cavity, and that trend continues on the V7. It doesn’t take a genius to deduce that this change affects the cushioning level, and that the 860 V7 should be the firmest of the lot. 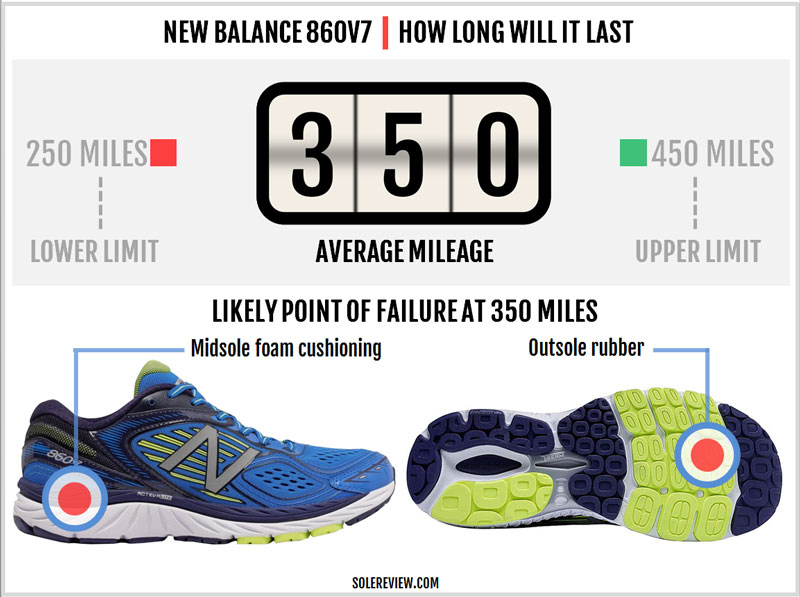 Expect standard durability levels from the 860V7. The regular EVA foam is prone to cushioning loss over time, but the firmness will prolong the midsole’s life when compared to softer compounds. The upper uses a lot of sturdy layering, so expect no trouble from a durability perspective.

The outsole will wear out at its own pace, giving you approximately 350 miles of range. The slabs used on the 860 are rather thick, so there’s adequate margin for initial wear and tear without compromising the shoe’s performance. 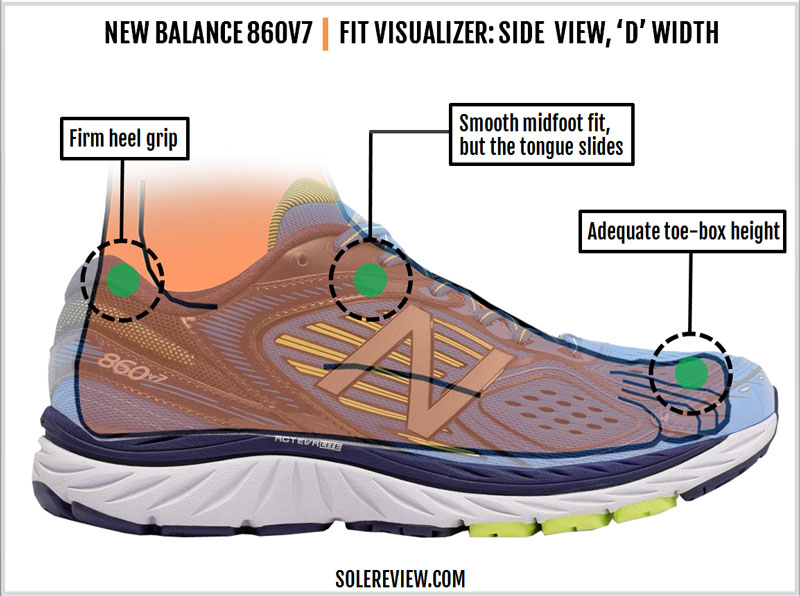 The 860 uses a stitched toe bumper which guarantees enough height inside the toe-box. The insides fit smooth due to the no-sew construction on the outside, though the extent of the tongue slide is annoying. The tongue flap isn’t wide, and there’s a lack of an inner sleeve. And we think that the elastic gusset in the front only makes the slide worse.

The heel offers satisfactory grip, so nothing negative to report here. While the material spec isn’t the plushest, the combination of the internal heel counter, foam padding, and the lining gets the job done. 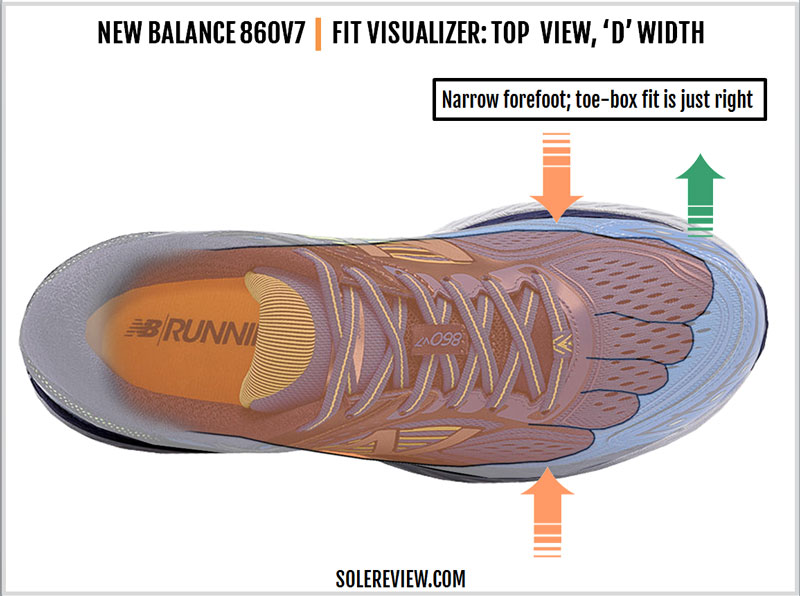 The toe-bumper ensures sufficient height and sideways width, but the forefoot – the zone between the toe area and the midfoot – has a snug fit. It’s far from overbearingly narrow, and besides, New Balance offers four optional widths on the 860.

The sizing fits true, though one tester has reported that the 860V7 fits a bit smaller than the V6. 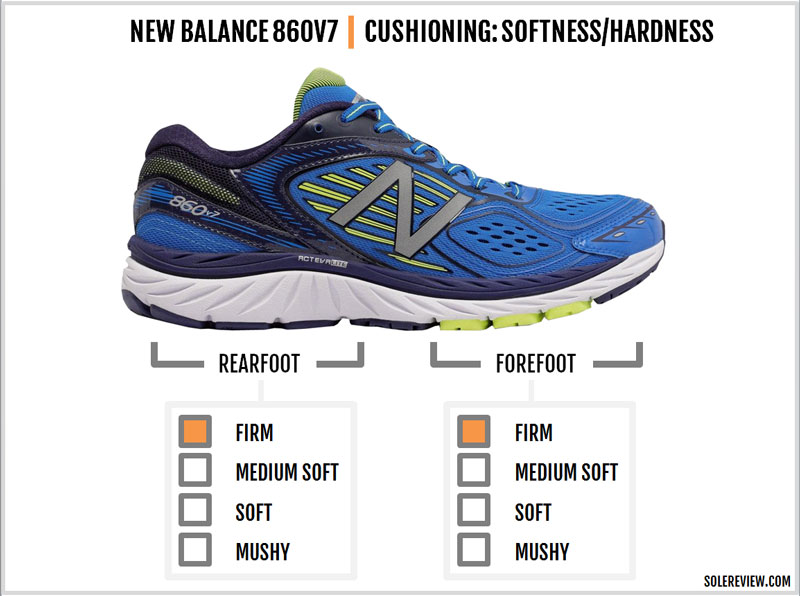 For reasons described in our midsole/outsole breakout, the V7 ends up producing a firm ride. There are multiple factors which contribute to this ride experience. The generic insole is firmer than the Ortholite used last year, and this completely transforms the feel underfoot. The midsole has been redesigned to end up firmer than before, and the under-heel cavity is smaller in size.

We must point out though, that running in the 860 isn’t a jarring experience. The blown rubber slabs under the forefoot and split rearfoot outsole produces a certain level of padding, regardless of the footstrike type. But the sense of firmness stays with you throughout the ride, so this is useful information if you’re planning to buy the 860 V7.

In other words, the 860 is firm, but isn’t devoid of cushioning. Softness and cushioning aren’t mutually inclusive, and the New Balance 860 provides adequate insulation from the running surface. You can run long ones (half marathon to a full 26.2) in the 860, but you should be comfortable with the firm cushioning. 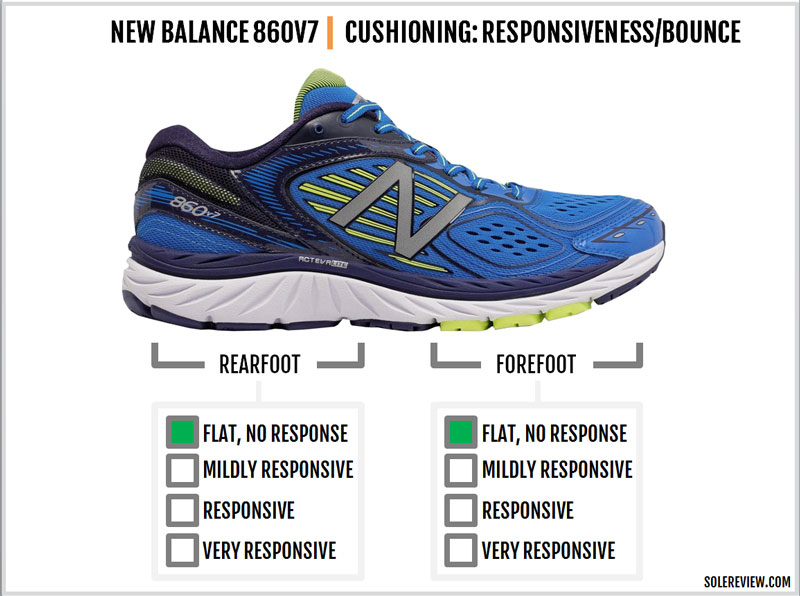 None of the midsole materials used on the 860 feel responsive. The midsole doesn’t feel engaging to run in, and the increased firmness does not help either. 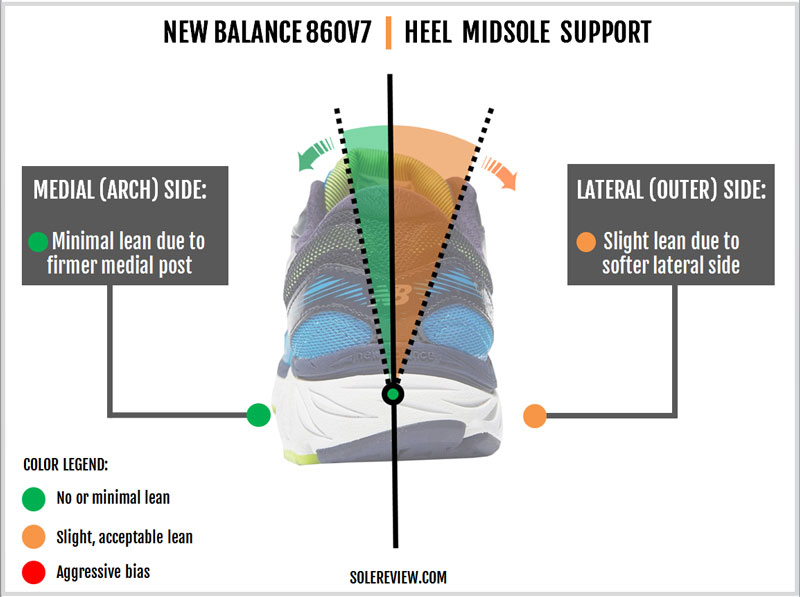 There’s a bright side to the extra firmness, and that’s a higher level of stability. Not only is the 860 very supportive, but it also scores well on the transition quality. The firm ride is beneficial for efficient heel-to-toe loading and also for slightly faster runs.

The relative rigidity of the 860’s forefoot also comes in handy here. Push-offs feel comparatively quicker than a softer and more flexible shoe in the same class. 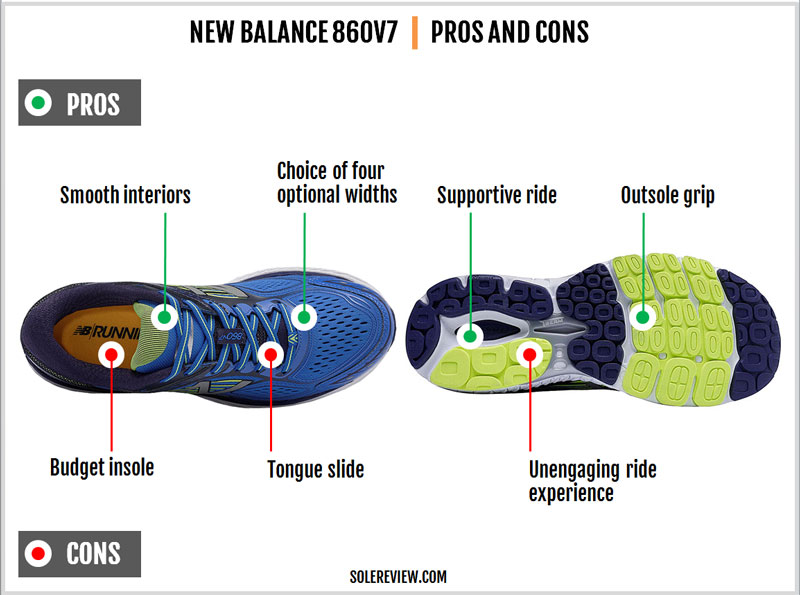 The 860 V7 does what it says: it’s a very supportive shoe without the excessive motion-control behavior which came with some of the earlier 860 versions. The outsole grips well over most surfaces, and the smooth fitting upper comes in a slew of optional sizing widths.

On the negative side, the midsole feels pretty dead to run in. Regardless of what New Balance says about its fancy cushioning tech, the 860 isn’t fun to run in. And replacing the last year’s plush Ortholite insole with an ordinary one doesn’t help either.

We also need to point out the new 860’s not-so-insignificant weight gain over the V6. An increase of a full ounce in this weight class is never a good thing. 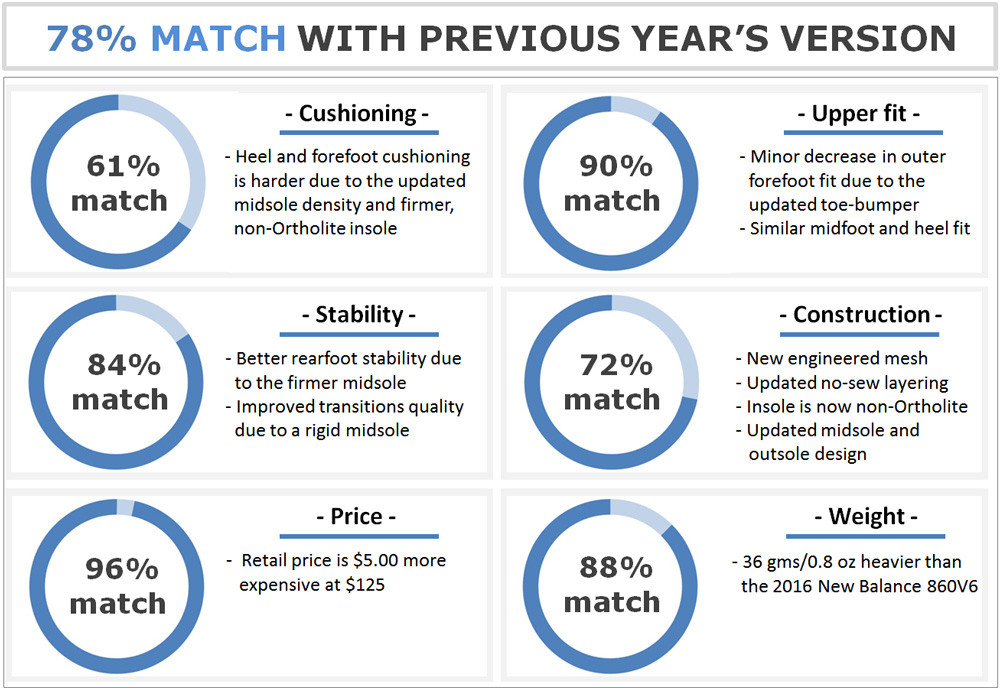 If you’ve been a 860 loyalist, then you will find the V7 clunky. With good reason too; the V7 is a full ounce heavier than the V6, and much firmer due to the changes mentioned earlier in this review. On the other hand, the stability and transition quality has improved over the V6.

The upper fit hasn’t changed much except for a minor reduction in forefoot space. The V7’s toe-bumper is taller on the lateral side, so that affects the amount of interior room.

You’ll also encounter other structural updates such as the different placement of no-sew layers and a reworked outsole geometry. The New Balance 860 V7 is also $5.00 more expensive than the V6.

We recommend to stick to the 860 V6 instead of splurging on the brand new V7. 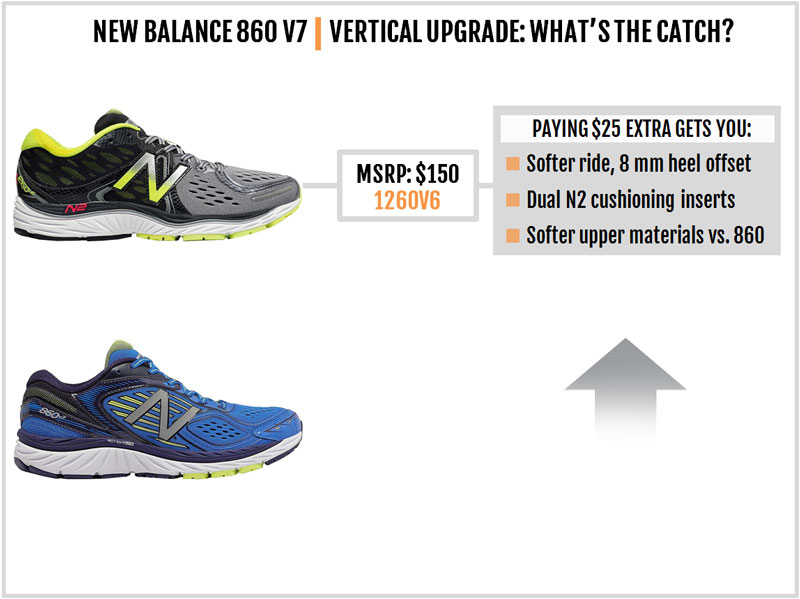 At a $25 premium over the 860 V7 is the 1260 V6. New Balance’s premium support shoe features a softer ride courtesy the ‘N2’ foam inserts, and the engineered mesh upper packs more plushness than the lower-priced 860. 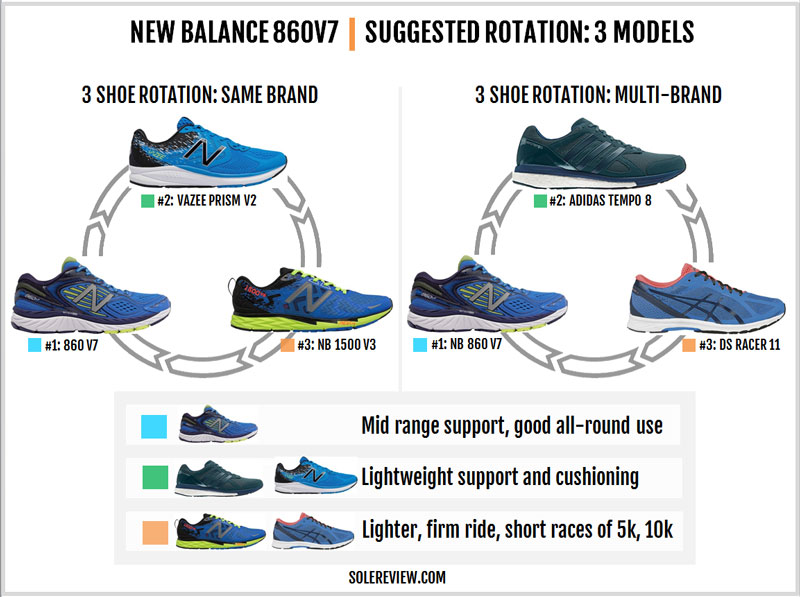 There are a couple of ways you go about choosing the 860’s rotational companions within the New Balance assortment. You can either choose a softer stability shoe like the 1260 V6 (since the 860 is firm), or buy two lighter and faster shoes. The Vazee Prism V2 is fast support shoe and so is the 1500 v3; except the Prism has a wee bit more cushioning than the 1500.

You can follow a similar approach when considering a couple of non-New Balance models to go along with the 860. The Tempo 8 is the Vazee Prism V2 equivalent, and the DS Racer 11 is a faster version of the 1500.

If a lot more cushioning (than the 860) is what you makes you happy, then the adidas Supernova ST is worth checking out. 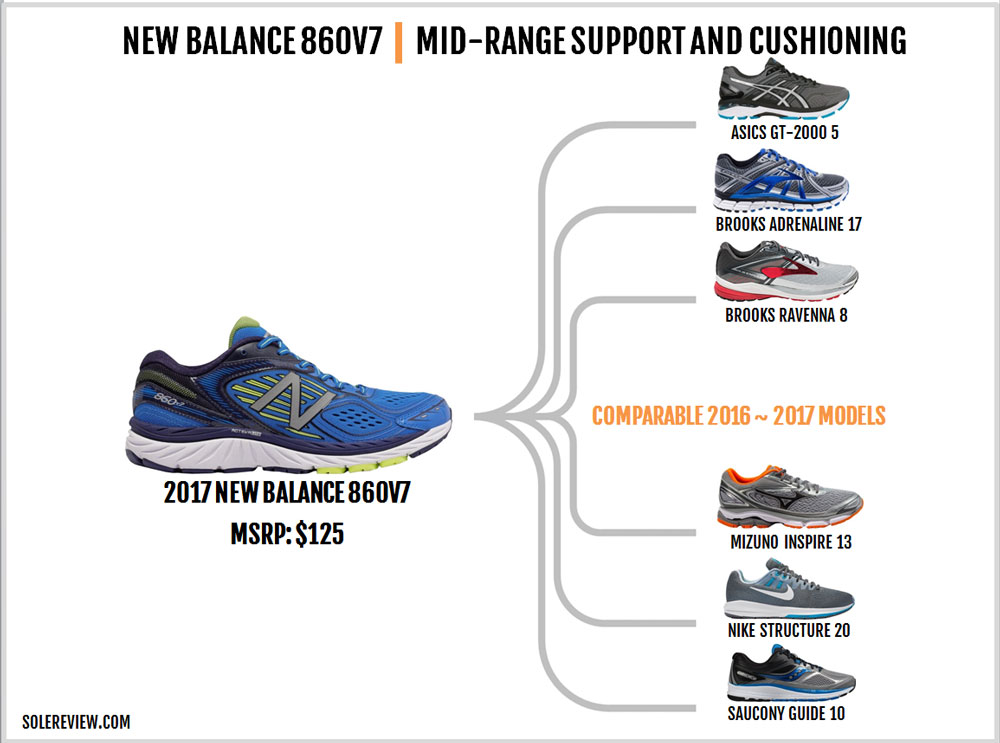 There’s a wide variety of mid-range stability footwear available, and all of them interpret this category in their own way. The Asics GT-2000 5 has a medium soft ride, while the Brooks Adrenaline GTS 17 has a firm ride with a plush upper.

The Brooks Ravenna 8 is slightly softer than both the 860 and the Adrenaline, and the Saucony Guide 10 and Nike Structure 20 are firm yet slightly responsive shoes. And the Mizuno Inspire 13, well, feels like a wave plate fitted Mizuno.

The adidas Supernova ST isn’t included in this list because of its much softer ride and lower stability levels compared to other shoes on this chart.