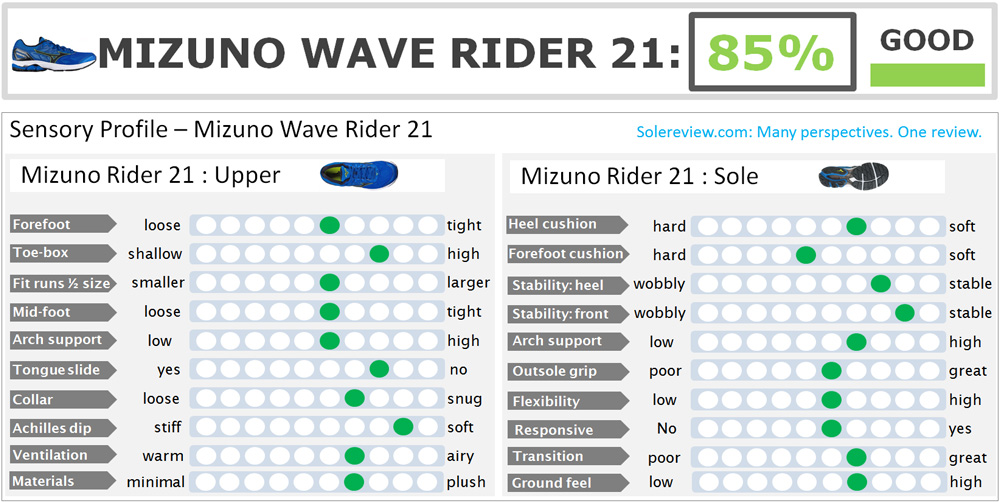 Mizuno’s popular neutral trainer only receives minor updates, so there isn’t much difference between the Rider 20 and 21. You still get the semi-firm ride and the spacious upper.
Supportive ride, roomy forefoot and toe-box
The ride is a bit clunky (as always), unresponsive forefoot, the upper is better off without the stitched side logos 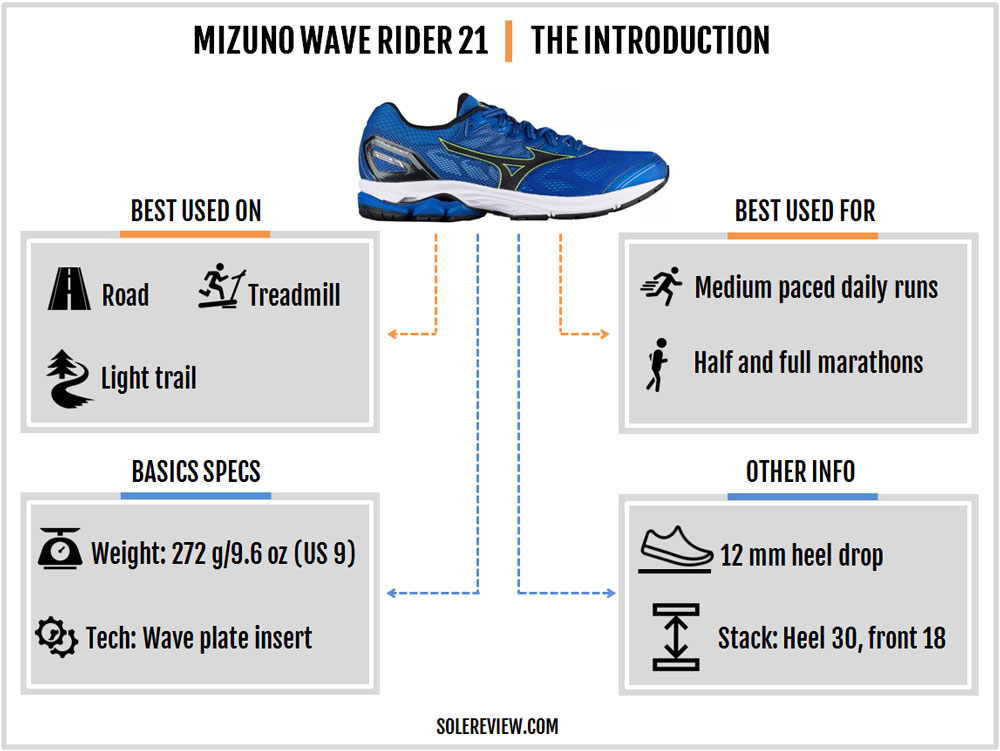 If an updated running shoe model keeps the same midsole and only makes minor changes to its upper, then reviewing it should be easy, yes?

It’s quite the opposite. In this case, the Mizuno Wave Rider 21 is very similar to the 20. The midsole and outsole are the same old. The upper gets a few updates, but nothing which upsets the fit character. So what do you say about the ‘new’ Wave Rider which hasn’t been said before?

And we all know that a Mizuno stays a Mizuno, as long as the plastic Wave plate continues to be a part of the midsole. As a result, the Rider 21 has an identical firm-ish ride quality as the 20. The upper fits the same too except for the slightly softer heel collar and a relaxed forefoot. 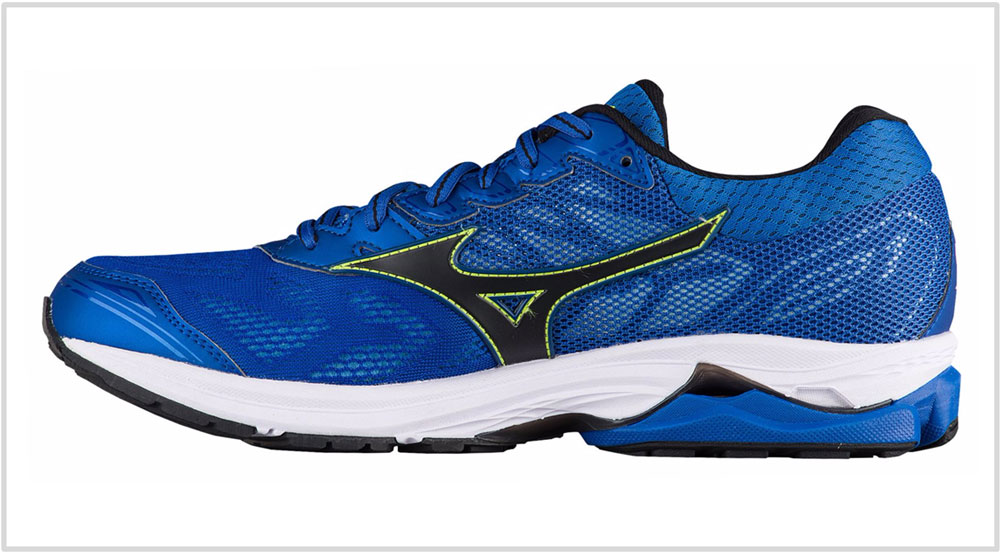 The Rider 21’s upper design is very close to the 20. So much so, that if you made both in the exact color combination, it’ll be hard to tell them apart. The toe-box has a stitched bumper, and the forefoot is made of an engineered mesh which combines selective ventilation with supportive areas.

Thick Mizuno logos made out of thick urethane are stitched over the sides. The midfoot panels are dual-layered, revealing cosmetic details under a thin net mesh. The heel has a hard internal counter with glossy detailing on the outside. 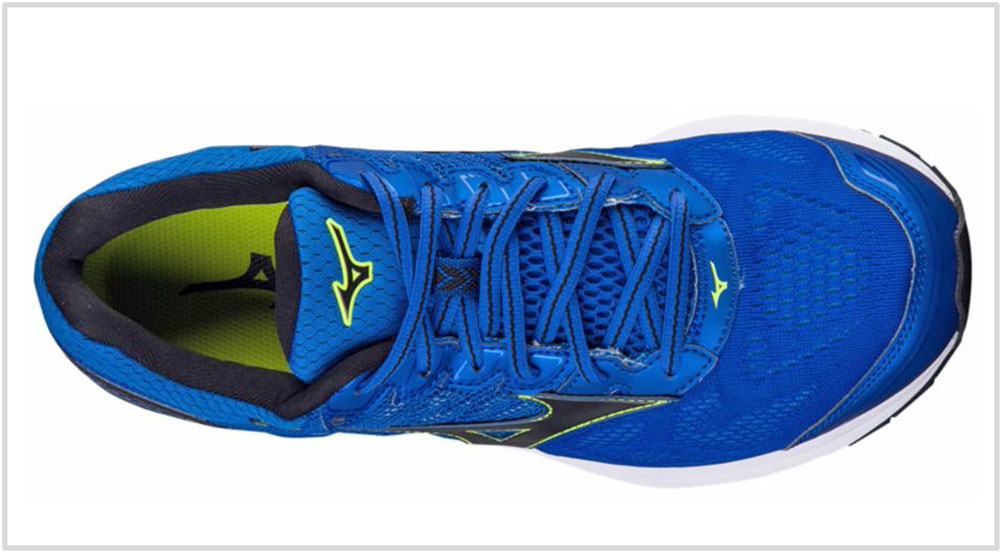 The tongue is unsleeved, and the lacing area is reinforced with stitched synthetic leather. There’s no tongue slide due to the wide flap which restricts sideways movement.

So that’s it? No changes on the 21 over the 20? But we used the word ‘similar’ instead of ‘identical,’ so there are a couple of tweaks after all. The Rider 21’s outer heel collar uses a softer fabric on the outside. While the amount of foam padding hasn’t changed, but the collar becomes softer due to the material update.

In the front, the synthetic toe-bumper is a mite shorter on both sides. This means that there’s more open mesh between the toe-bumper and the molded midfoot logo. Consequently, there’s a minor update to the Rider 21’s fit quality.

By the way, not all Mizuno shoes are unsleeved. The Gore-Tex version of the Wave Rider 21 has a bootie construction along with ‘winterized’ materials, just in case the engineered mesh version is too breezy for you. The toasty Wave Rider 21 GTX also comes with a trail-oriented outsole to match. 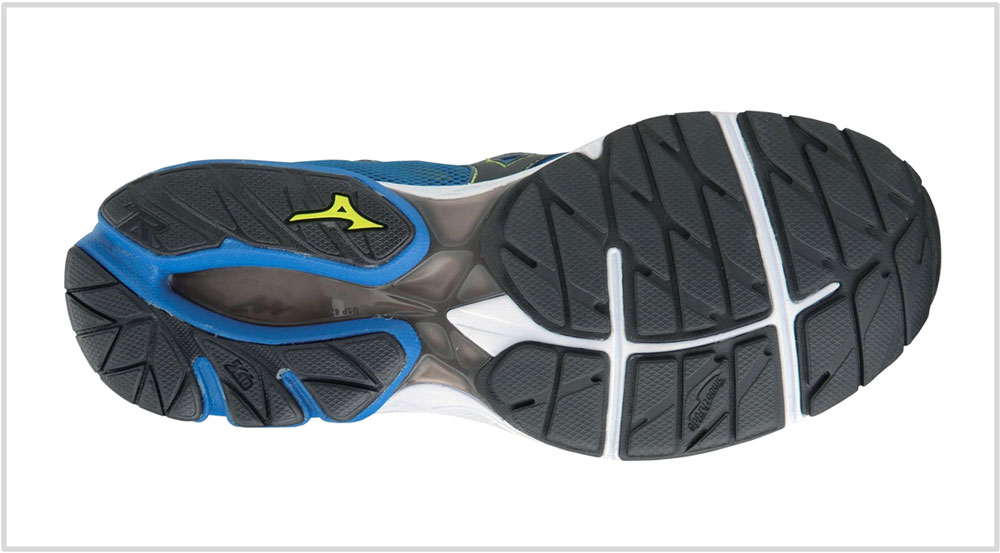 If you’ve owned a Mizuno Wave Rider before, you’ve owned them all – at least from a sole design viewpoint. The rearfoot has two densities of foam – one over the Wave plate and another below it. The forefoot is built using single-density EVA foam.

The plastic Wave plate also extends forward to form the midfoot shank. This means that there’s a gap underneath the midfoot which splits the forefoot and rear outsole into separate halves.

The forefoot uses softer blown rubber and the rearfoot is made of Mizuno’s hard X-10 rubber. The forefoot has the characteristic Mizuno flare which creates a wide and cup-like base for the foot to rest on.

Just like the Rider 20, the Wave plate has an asymmetric design. The outer side has a gentle curve and the inner midsole uses pointy crests. This makes the Wave plate more supportive on the medial side than it is on the outside.

The insole is identical to the Rider 20’s except that the edges get a bit of extra molding flare. 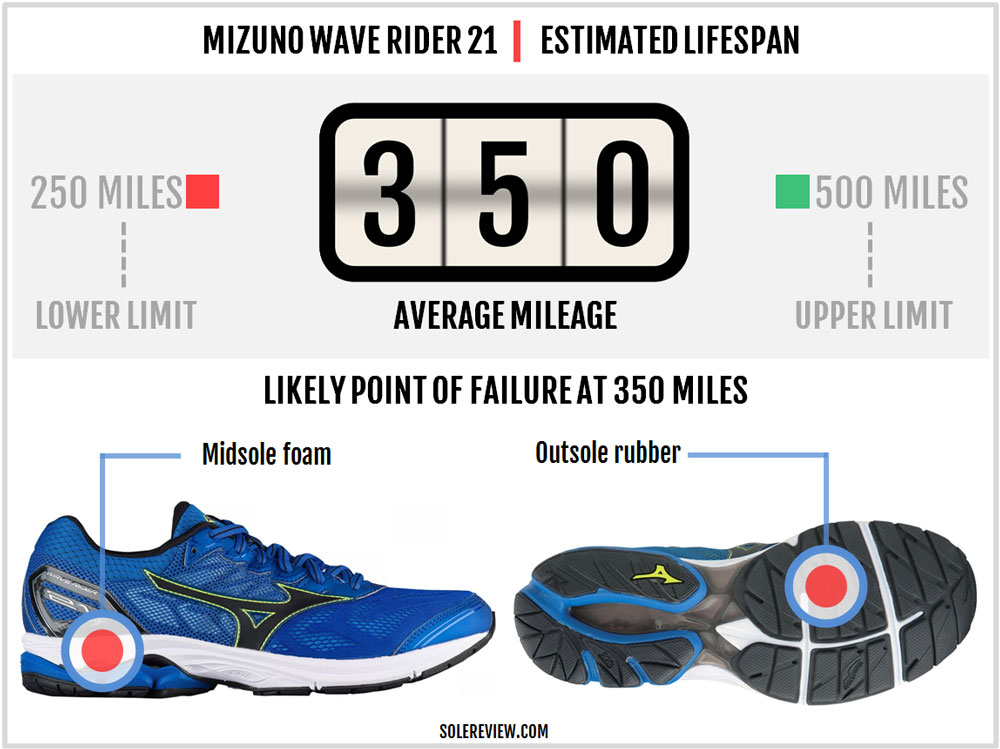 If it were a matter of just the upper and the outsole, the Wave Rider is extremely durable. The outsole has a generous application of rubber, and the upper is multi-layered. The Wave plate is resistant to deformation, so that’s one less thing to worry about.

The only durability concern is the Rider 21’s midsole foam. It tends to pack after a couple of hundred miles, making the ride firmer. Or as Mizuno loyalists like to call it, the ‘breaking-in’ of the sole. 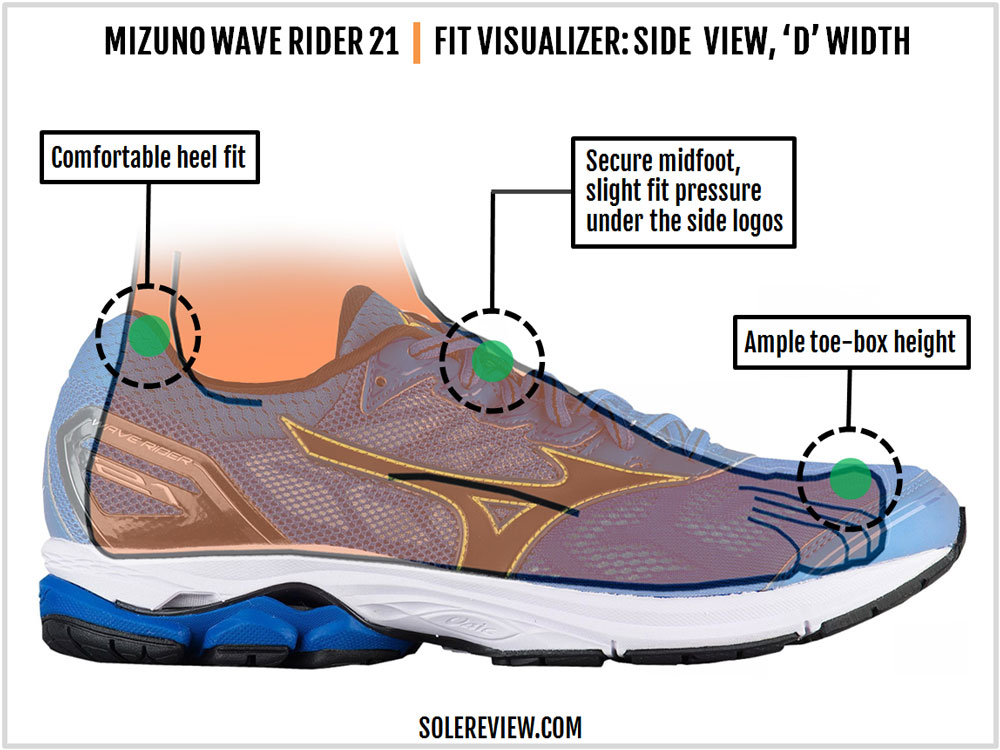 Except for some lighter models (Sayonara et al), Mizuno prefers using a stitched toe-cap; this results in ample vertical space inside toe-box. Combining the high toe-box with a spacious forefoot creates splay room for the toes. The Rider 21’s fit is true to size.

The Rider 21’s toe-bumper is shorter on the sides than the 20, keeping a larger mesh area free of overlays. This leads to a marginal increase in forefoot room over the 20.

The midfoot has a couple of pressure points caused by the thick Mizuno logos stitched over the upper. While the insides have a taped seam running over the stitch-lines, the logo joints create a localized sensation of tightness. 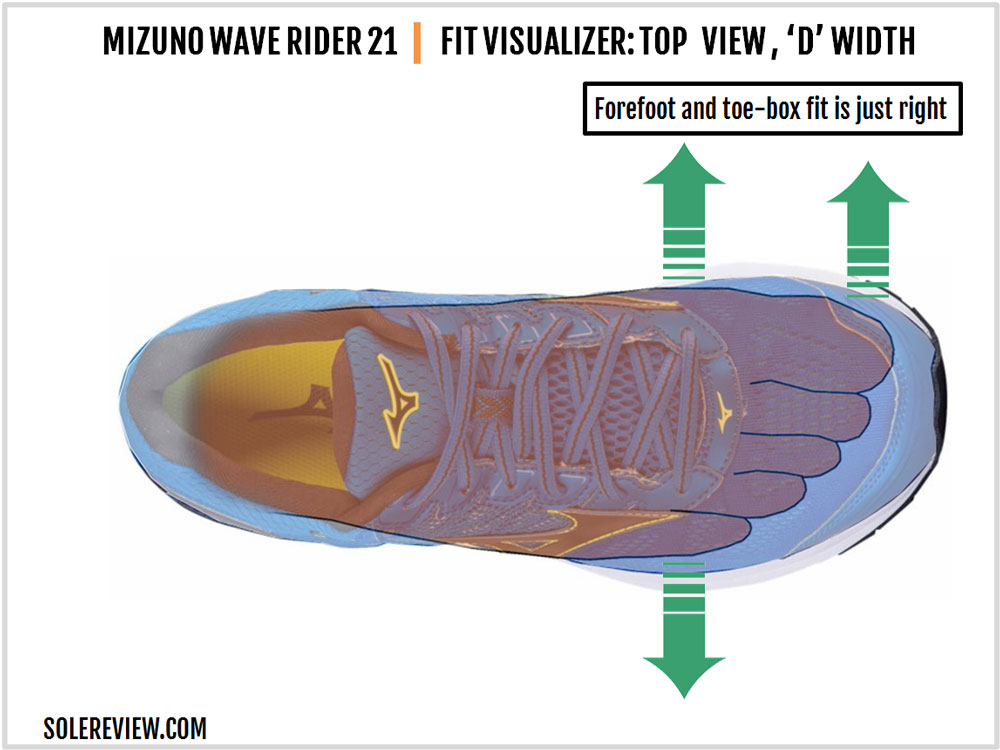 Otherwise, the interiors feel smooth. The tongue isn’t anchored by an inner sleeve (mind you, the GTX version has one), there’s minimal slide due to the wide flap construction. A word of caution for those who lace their shoes tight – the lacing panel (synthetic) near the forefoot tends to gather when laced tight.

In the rear, the heel collar is softer near the top. The reason for this is a softer mesh component attached separately to the rest of the mesh upper. On the Rider 20, this wasn’t the case. Using an independent piece makes the collar edges softer without the need to increase foam padding.

As far as the grip is concerned, the Rider 21’s heel does a good job; no slippage here. 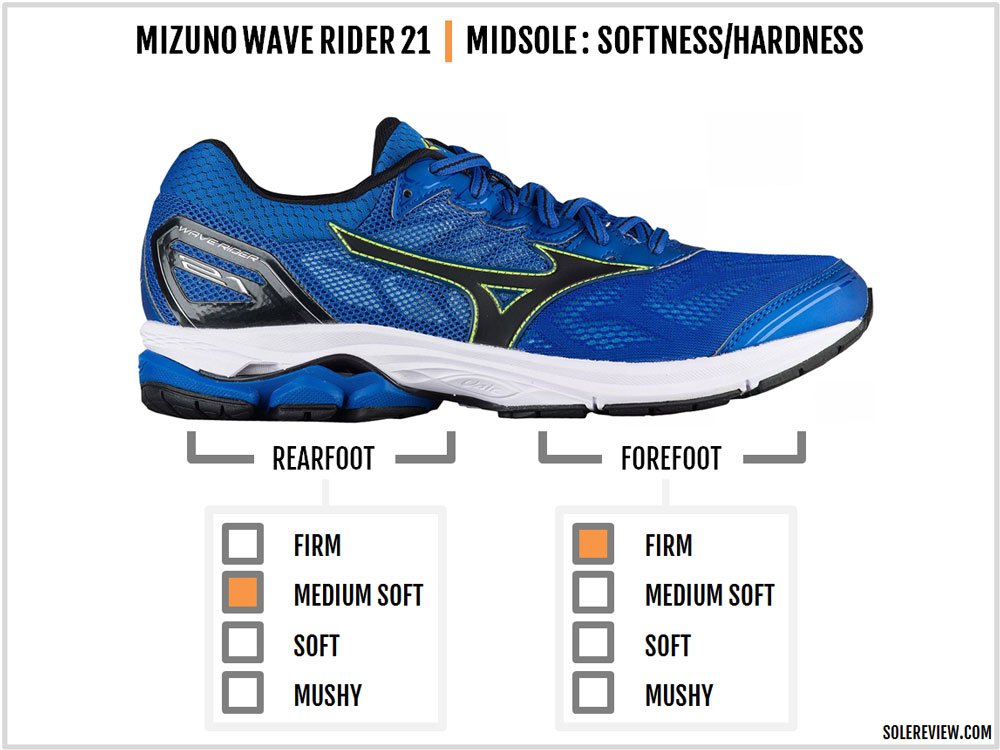 The midsole has all the ingredients which give the Rider 21 its distinctive ride flavor. The embedded Wave plate adds firmness to the cushioning quality, and this also makes the Rider 21 supportive. The Wave prevents the excessive compression of the foam and results in a balanced ride character.

The forefoot has a relatively lower stack of foam compared to the rear (18 mm vs. 30 mm). Consequently, most of the cushioning softness and responsiveness is concentrated in the rear. 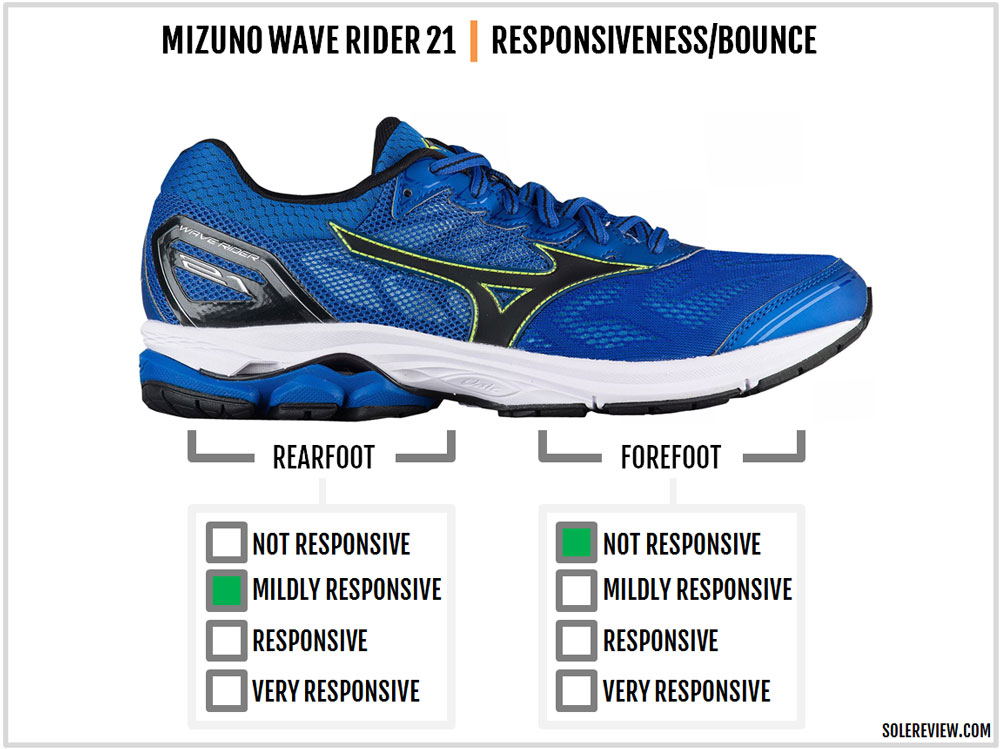 The Wave plate also produces a mild sensation of responsiveness, as the corrugated structure flexes under the body-weight during foot-strikes and transitions.

While the foam insole and the blown rubber outsole provides decent padding under the forefoot, ride support is where the forefoot really shines.

The forefoot has a slight cup-like curve and the base is also wide. This creates a stable/planted base for the foot to transition out of. The Rider 21 isn’t overly flexible, so the push-offs feel efficient.

On the flip side, the Mizuno Wave Rider 21 is noisy. We highlighted this behavior in our Wave Rider 18 write-up three years ago, and the Rider 21 is more of the same. The ultra-hard rearfoot rubber makes quite the racket on roads, so it is safe to say that the Rider 21 isn’t for everyone.

Also, given the Rider 21’s unique midsole construction, the components require some time to ‘bed-in.’ This happens after at least 50 miles/75 km of usage after which point the foam surrounding the Wave plate begins to pack a bit.

Long-time Mizuno patrons will be familiar with this breaking-in process which results in a firmer ride quality after a few months.

So what kind of runs is the Wave Rider 21 good for? It is certainly suitable for daily runs, and even for faster training workouts. At sub-10 ounces, the Rider isn’t heavy at all, and the ride has a firm feel. Both these properties make it suitable for the aforementioned use-cases.

Can the Rider 21 be used for marathons? There isn’t a universally acceptable answer to this question. The ride has ample cushioning but of a firm kind, so a lot will depend on your personal footwear preferences. If you like a soft underfoot feel, then this shoe won’t cut it as a marathon slogger.

But if you’re ok with the Rider’s distinct midsole characteristic, then sure, run a marathon in them. 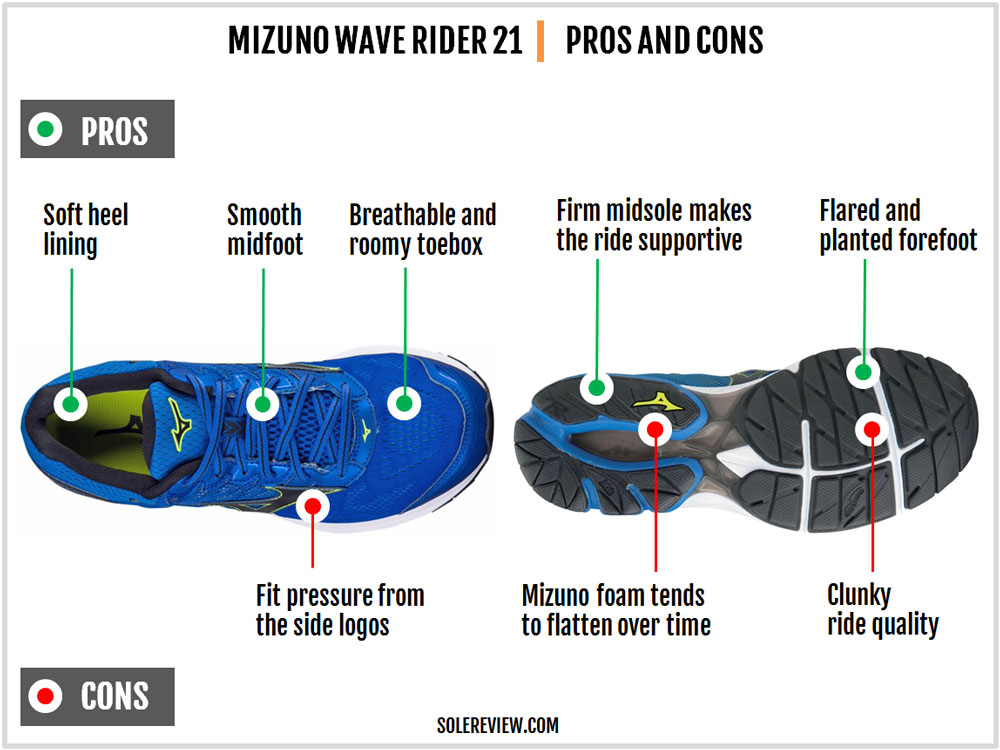 There are a few things we’ll always love about the Rider. The hard Wave plate inside the midsole gives most Mizunos a supportive and consistent ride character. The forefoot is flared wide and also curved gently in a cup-like fashion, and this gives the Rider a planted feel.

Inside the upper, there’s plenty of forefoot and toe-box room. The materials have a soft hand-feel, thus creating comfortable interiors. The upper could have been better minus the stitched Mizuno logos, though. A fused type (like on the Sayonara 2) would have improved the fit.

Also, runners new to the Rider will find the ride quality clunky and noisy. It gets better after 50 miles, but still.

SUMMARY, AND CHANGES BETWEEN THE RIDER 20 AND RIDER 21

You’d have deduced by now that the Rider 21 is almost the same as the 20 except for the minor fit difference around the forefoot and heel.

An identical midsole means that the Rider retains the familiar medium-soft yet noisy ride quality. But that’s how the Rider has always been, so no surprises here. Go for the Rider 21 if you want a neutral running shoe with superb ride support. 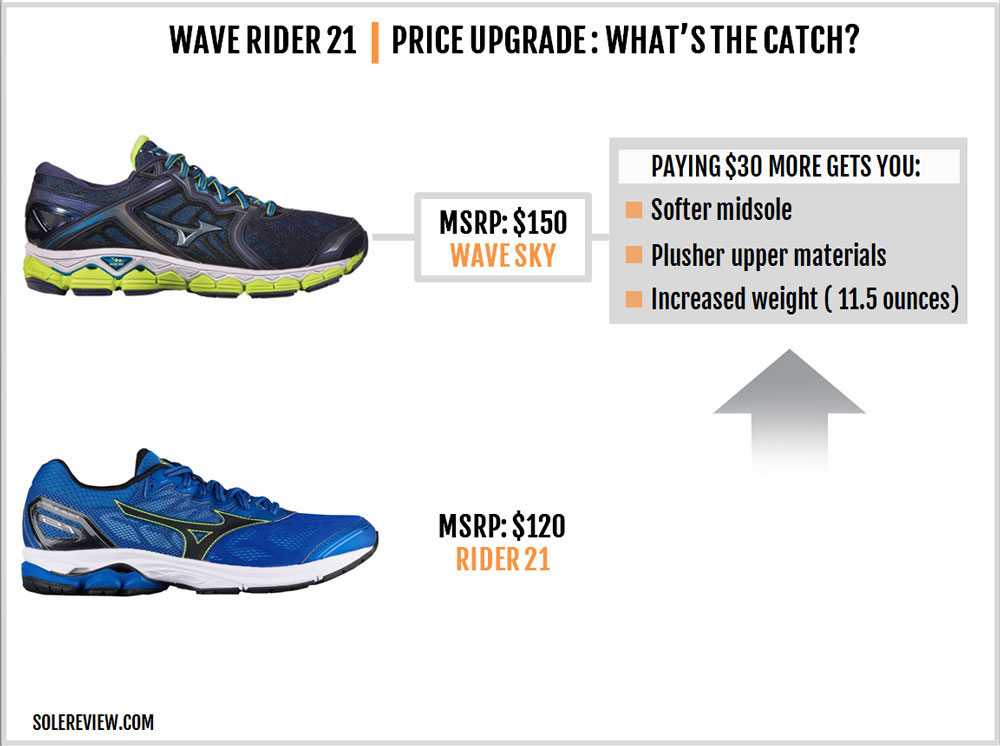 For $30 extra over the Rider 21, you get the Wave Sky – a plusher shoe with softer interiors and a higher level of cushioning. 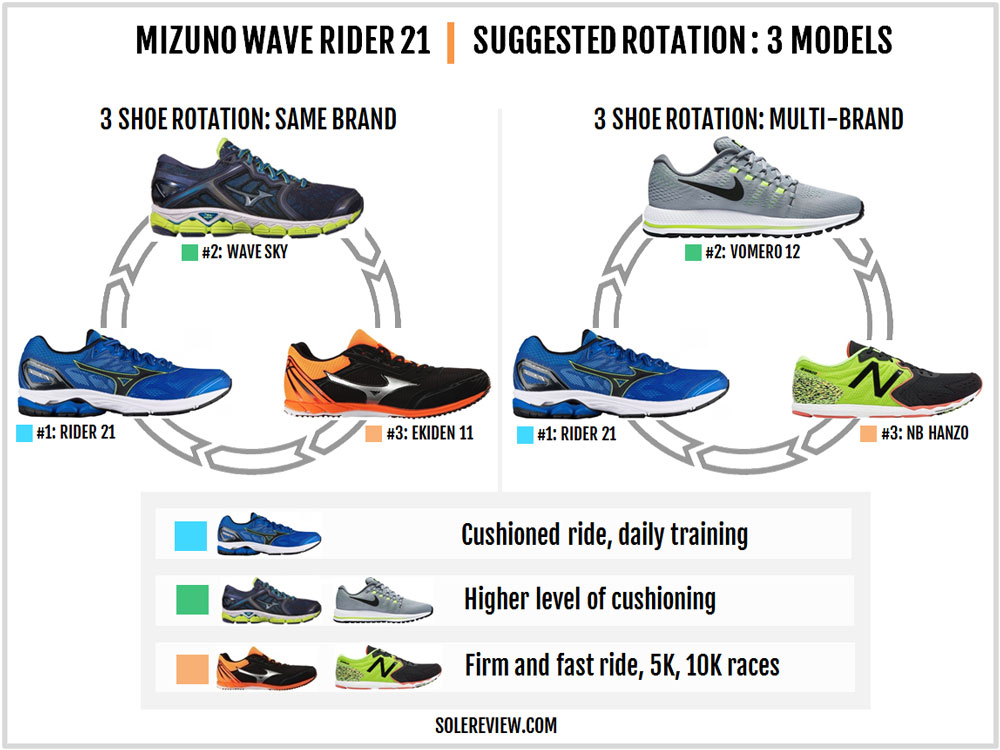 If you want a higher level of cushioning without sacrificing support, the Wave Sky is your friend. On the other end of the spectrum is the Wave Ekiden 11 – a lightweight racing flat which is a great fit for 5K and 10K runs. The New Balance Hanzo is an alternative to the Ekiden.

There are many choices in the premium cushioned category if you do not want the Wave Sky. The Nike Vomero 12 is cushioned and responsive trainer, and then so is the Brooks Levitate. Or for that matter, the Saucony Triumph ISO 4. 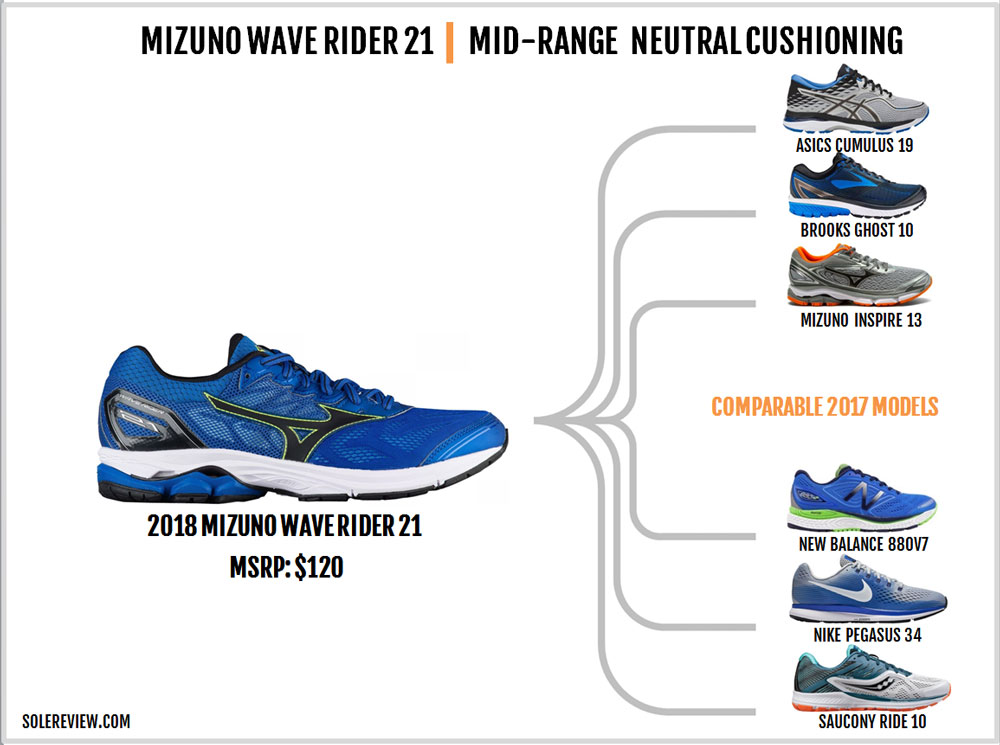 Technically speaking, the Mizuno Wave Rider 21 is a neutral running shoe. This puts it in the same class as the Asics Cumulus 19, Brooks Ghost 10, New Balance 880V7, Nike Pegasus 34, and the Saucony Ride 10.

Mizuno’s Wave plate imparts the Rider 21 a unique ride quality. Hence, it makes sense to look within if you want a shoe with a similar ride. The Wave Inspire 13 is the closest one can get to the Rider, regardless of the latter’s support classification.