Nike's popular minimalist shoe with a new upper, and carryover outsole from last year's Free Run 3. The sole unit performs as promised, but the upper is a disappointment with the intrusive 'Flywire' cords making the fit tighter than it should be.
Vibram Bikila/Seeya 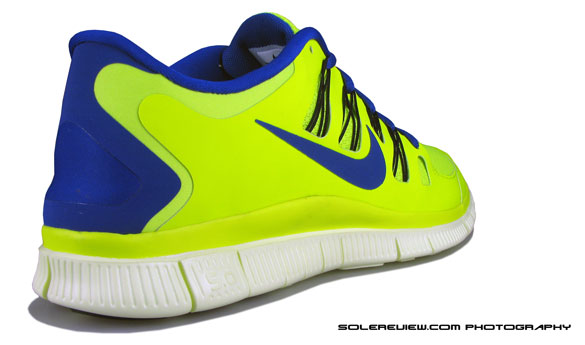 Surprise, surprise. Nike drops the ‘Run’ tag from its popular Free model this year. So from the ‘Nike Free Run 3’ last year, 2013’s release is now simply called the Nike Free 5.0. We weren’t expecting this, considering that the Free Run series over the last few years has been on a roll, probably bringing in more money in sales for Nike than ever before.

It was a function of design combined with the strong barefoot shoe trend;  the Free Run 1 and 2 appealed to a large segment of runners with its unconventional ‘cut-out’ quarter panels. 2012’s Free Run 3, the last in the ‘run’ series took the game further with its fused ‘Nanoply’ upper and a brand new outsole with increased grooves for flexibility. So why drop the ‘Run’ suffix from the best selling Free model?

We think Nike wants to keep the nomenclature clean, and not confuse runners. A lot of the people we talk to have difficulty understanding the differences between many variants of the Nike Free –  3.0, 4.0 and 5.0. Here’s an easy to understand chart of the Nike Free Hierachy and this new name fits right in. This year’s Free 5.0 replaces the Free Run 3 at the ‘5’ position in the chart below.

Nike has a tradition of fixing things which aren’t broken. Going by the last few years of Nike releases, a shoe design, even if it does extremely well in its first year, will be replaced by a brand new design the next. Nike used to have an evolutionary approach to design till 4~5 years ago, but not anymore. It is now one new radical design after another, even on continuing models, and the 2013 Nike Free 5.0 is no exception.

Just  when we were getting used to the fused Nanoply on the Free Run 3, out comes this year’s Free 5.0 with a brand new upper. Instead of the Nanoply panels, it’s the Flywire now which is this year’s highlight. Those loopy things are everywhere on Nike’s product line-up, so it was a matter of time before it showed up on the Nike Free 5.0. 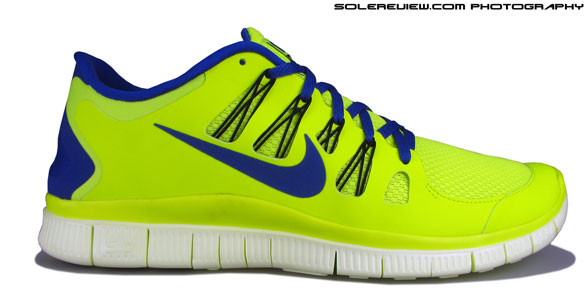 Like everything else, there are two sides to this ‘new-design-every-year-approach’. One way to look at this is that every year the shoe stays fresh and new, and improvements can  come on-board in rapid leaps. The flip side, we argue, is that the design of a shoe does not get a chance to be perfected, as it would through an evolutionary approach. And that holds true for this year’s Free 5.0. The brand new upper design takes a few steps forward, but does it go backwards too?

Sometimes change can be a not so wonderful thing.

The 2013 Free 5.o upper has been reworked ground up, which means that it carries little over from the Free Run 3. The key update to the upper is the use of the Flywire loops in the midfoot section, and the intent, as it has been for other shoes using this technology, is to improve midfoot lockdown. This year’s Free also switches back to the gusseted (upper and tongue attached) construction as it had been in the original Free Run and the Run 2. Also, there are more traditional shoe making elements on this year’s version, like the stitched on tongue label and overlays, as opposed to the fused layers we have been used to seeing. Nothing wrong with that, as long as they perform well.

The panels in the midfoot area have cut out windows on the sides, not unlike the Free Run 2, and the dark colored Flywire cords start their journey at the base of the upper and loop their way through the cut outs to the eyelet area. The Flywire loops, though they seem flimsy, are secured tightly at the base. A length of durable fabric pins down all the cords at the base (see our picture below) which makes it very difficult for the cords to separate. Two Nike Swooshes are fused on either side, but reflectivity is conspicuous by its absence. 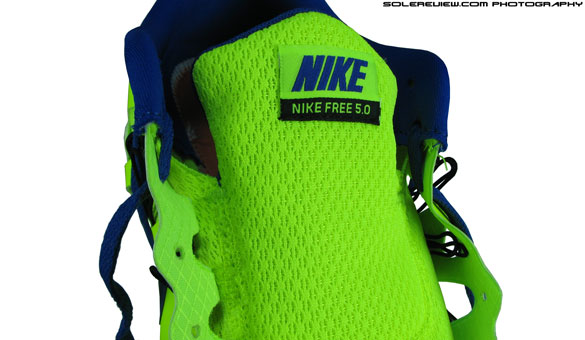 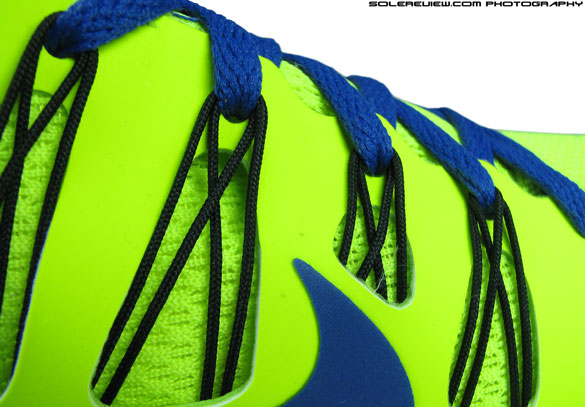 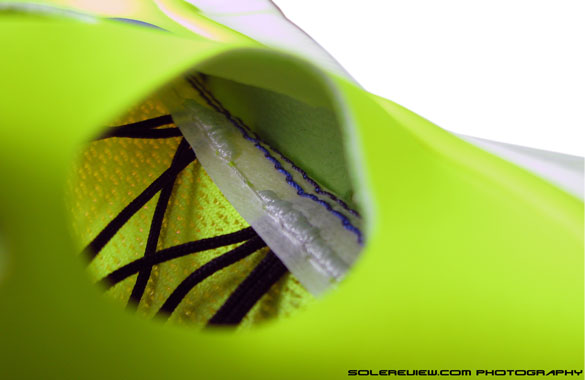 The upper mesh and linings are similar to what was used in the Free Run 3, but the 2013 Free 5.0 feels better in two areas – the midfoot and heel. Due to its gusseted construction, the new Free uses a semi-stretchable spacer mesh which is also slightly cushioned, so it has a better fit and feel when compared to last year’s single layer mesh.

The collar area uses the same tightly knit mesh as the 2012 Free Run 3, but there is an improvement. The smooth, sponge backed mesh now covers a larger are inside the shoe, so that’s a plus, making the heel section snugger. On the outside, the heel counter area is flanked on both sides by fused overlays, and there’s a stretchable mesh covering the heel bone. 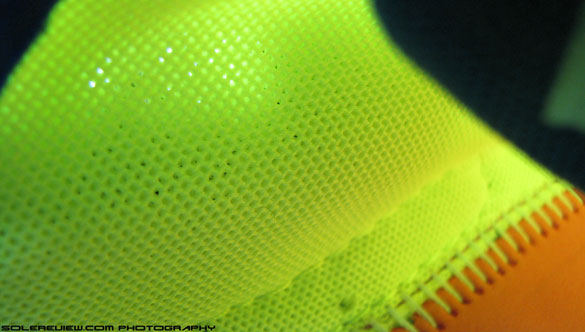 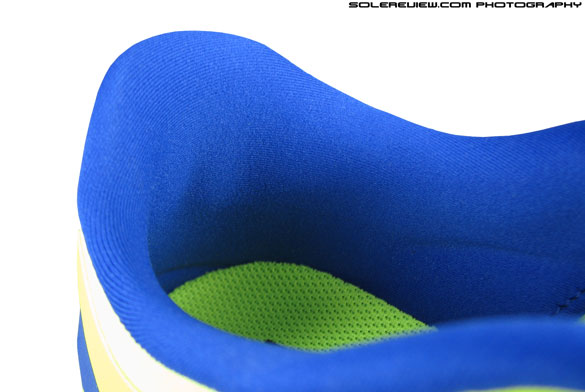 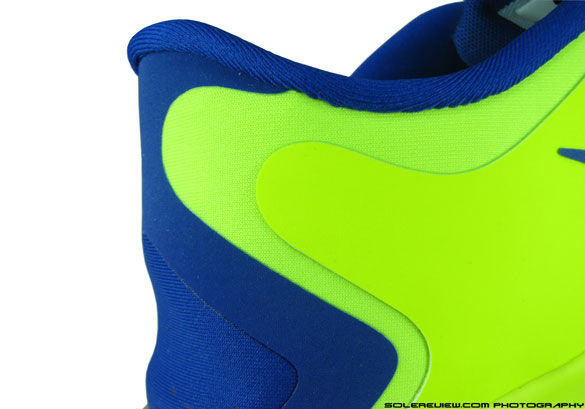 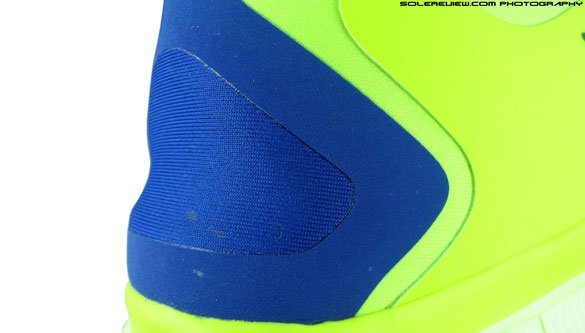 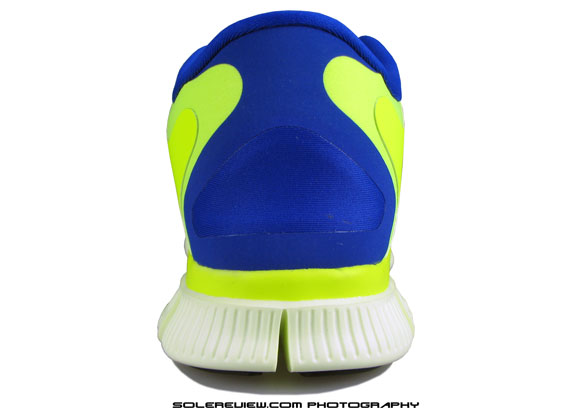 The sockliner is the same Ortholite type used in earlier versions of Free. Thin layer of foam covered by a fabric top cloth, and has a bit of a memory foam feel so the cushioning feels adequate. Molds well to the foot during a run, no issues there. Arch support is same as the Free Run 3 – not extremely supportive, just about ok. 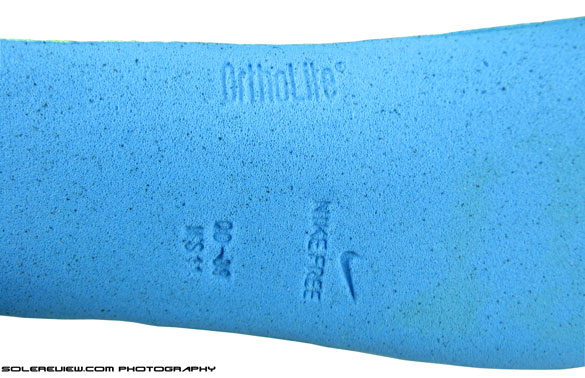 The outsole is carried over from the Free Run 3 – so no change there. Amazingly flexible, aided by multiple, deep siping placed just below the arch area. Rubber pods in the heel and toe-off area add a level of durability, and some extra cushioning comes from ‘piston-waffles’ – rectangular lugs projecting slightly outwards. When weight is applied on the lugs, it compresses inwards, helping shock absorption.

And the lack of rubber on the outsole does not mean accelerated wear and tear; we’ve been testing Nike Free’s over the last few years, and these shoes are reasonably durable, good to last at least 250 miles, if not more.

How does the Nike Free 5.0 perform, with all upper updates? Not very well, we’re afraid. Ironically, the most important component of the update turns out to be its greatest bugbear. The Flywire loops. The laces are meant to pass through the eyelet holes and the Flywire loops, and when they do, it tugs hard on the sides. The pressure is uncomfortable; and since the loops are slightly below the eyelets, the laces stretch out wide across. So wide, that the laces fall short and you barely have any left to tie together.

We initially thought that the laces were short for the size, but when we compared them to last year’s Free Run 3, the laces were actually an inch longer. Going by our experience, the laces on this shoe needs to be much longer than what it is. The tight midfoot lockdown brings two more problems. First being ventilation. With the midfoot pinned down by the Flywire loops, the air doesn’t get to circulate much, and needless to say, the foot gets hot during running. We tested the shoe in 60-70’s leading upto 100° , and the underfoot heated uncomfortably while running. Doesn’t feel nice.

The second problem is much more severe. There is a seam inside the shoe which runs vertically up the arch, and the tight midfoot lockdown has the seam rubbing against the arch. A few miles on the shoe, and we felt an irritation at the base of the arch, much like a small pebble which gets stuck between the upper and the foot. 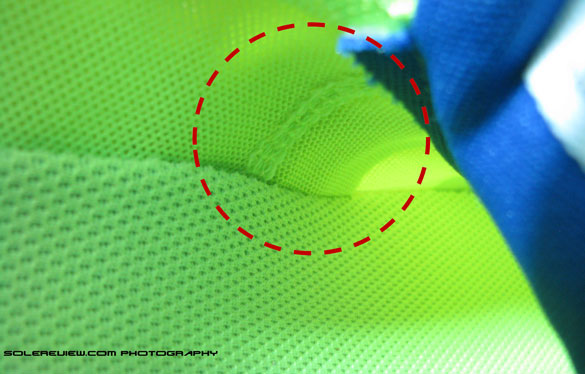 The funny thing is that everything becomes near perfect the moment you pass the laces through just the regular eyelets and give the Flywire loops a pass. The bootie construction fits snug, the materials feels great, and even the rogue seam doesn’t bother you.

We don’t have a high opinion of these new Flywire loops, and we’ve carried that sentiment from our Lunarglide 4 review. We hope we come across a Nike running shoe soon which influences that opinion positively. 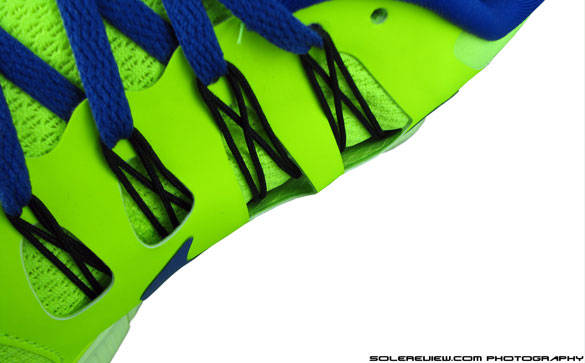 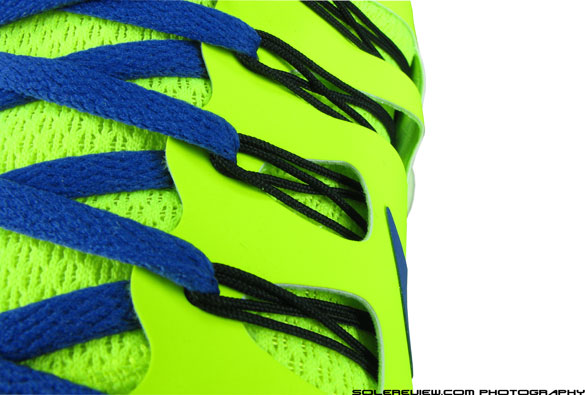 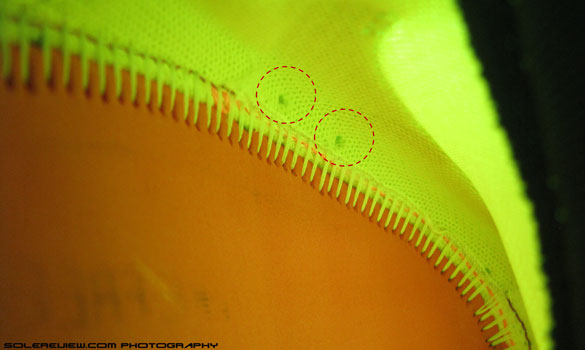 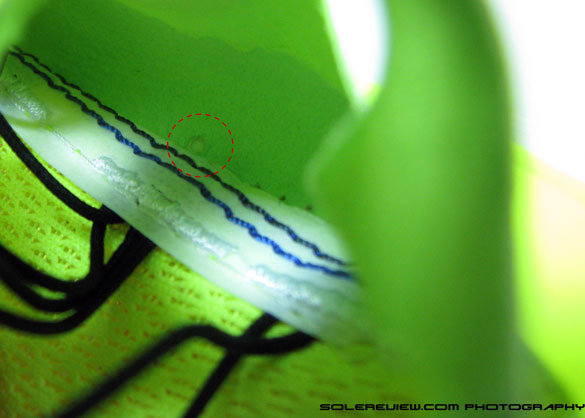 The construction isn’t perfect too. The synthetic leather panels with the cut-outs don’t sit flush with the upper surface. Big gaps show up even when properly laced, and that’s not it’s supposed to be. The panels on the arch side sit flush with the upper; and when we went to the nearby Dick’s Sporting Goods to check out a batch of half a dozen pairs, the results were inconsistent.

Some had perfect construction, while the rest were baggy, like the one we reviewed. When we went through the upper with a fine tooth comb, we noticed these circular perforation (pictures above) at different areas inside the upper – most likely meant to align all the pieces of the upper together while manufacturing. But that did not stop our shoe from looking like an early stage prototype sample, which it was not. 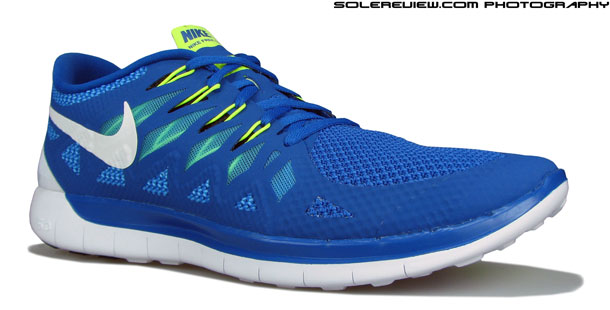 (Disclaimer: Solereview received the pair of Nike Free 5.0 as a free media sample from Nike)