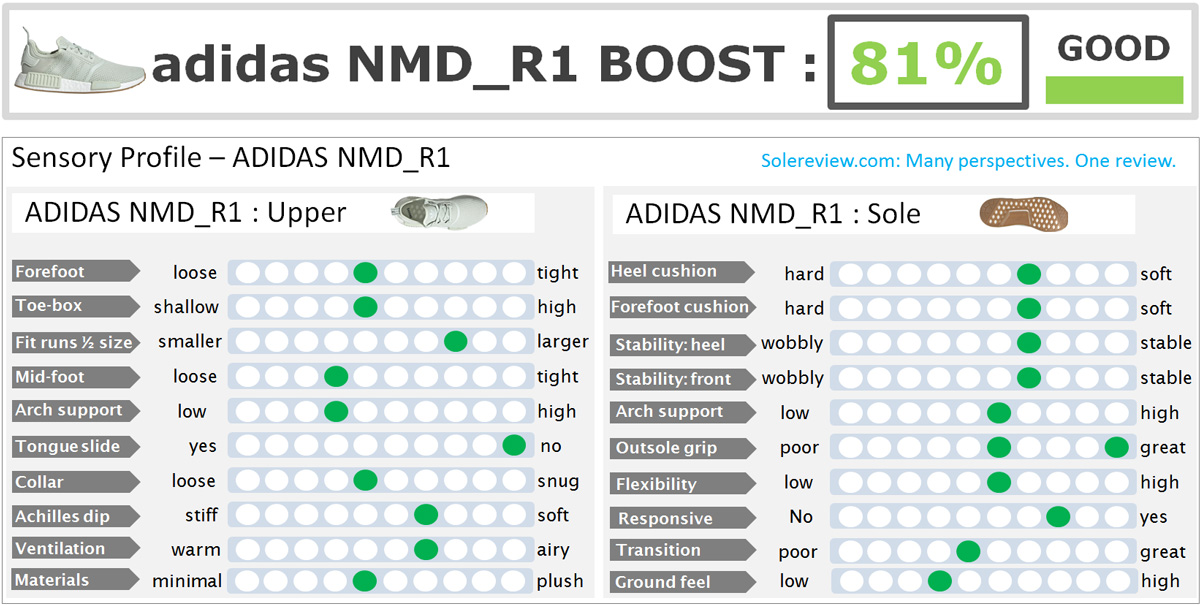 The adidas NMD R1 is a casual sneaker which combines modern-day Boost comfort with retro running shoe aesthetics.
Cushioned and supportive ride, just-right upper fit
The lacing is form over function; and why not a Continental outsole? 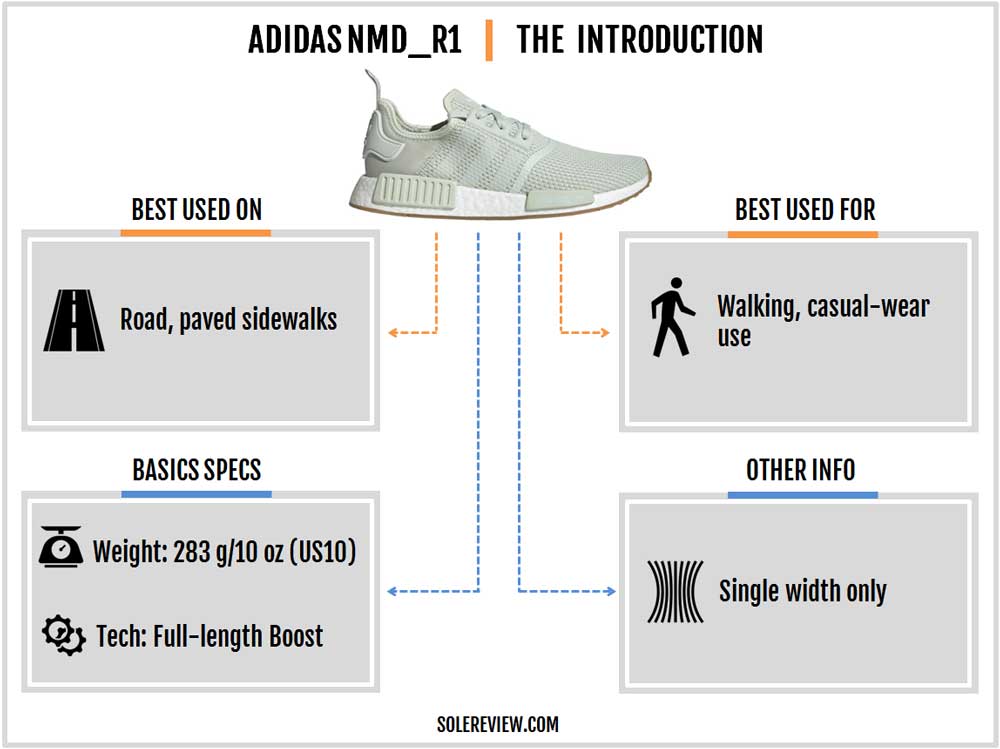 In the sneaker world, vintage seldom goes out of style.

Some retro silhouettes stand the test of time and continue to generate significant amounts of revenue for many brands. In some cases, the core business of a brand like Vans or Converse depends on classics.

For companies like adidas and Nike, it makes better sense to infuse vintage styles with newness so that they stay relevant.

Footwear technology has progressed by leaps and bounds over the last decade; shoes no longer have to rely on stiff cupsoles or blocky EVA foam midsoles. Nor do uppers have to be cut, stitched, and assembled.

In the end, it all boils down to comfort. What’s better on the feet – a clunky and heavy sneaker with a sole made of hard rubber, or a 9-ounce sneaker which uses a soft mesh upper and an uber-cushy ride underneath?

So when you bring old-school aesthetics and new shoe tech together, you can have your cake and eat it too.

The adidas NMD R1 is a great example of that concept in practice. Many adidas shoes in the ‘80s used color-blocked midsole plugs for support. Back in the day, EVA midsoles tended to compact and lose their cushioning within a few hundred miles. The foam plugs slowed down the process while adding a color pop to the otherwise bland midsole(s).

There were several vintage adidas shoes which featured midsole blocks. The most popular of them all is the 1984 Micropacer, a running shoe with a digital pedometer concealed within its tongue. Models like the adidas Fire, Richfield, the Boston Super, and the Rising star also had color-blocking foam plugs of different foam densities.

The midsole of the adidas NMD R1 is a homage to the aforementioned design. The upper also has a few vintage elements. The plastic wrap over the heel features the Trefoil logo along with ‘the brand with three stripes’ wording printed on the heel pull tab.

You probably know this already, but ‘NMD’ in the shoe’s name is a shortened version of Nomad, a term used to describe consumer groups who are like to travel and explore, or at least aspire to do so.

The ‘urban explorer’ is a travel-inspired design mood-board often used in the footwear industry. While the adidas NMD R1 draws some inspiration with its stabilizing foam plugs and the protective outsole, a clearer example would be the modern UltraBoost ATR. Other examples would be the variants of the Nike React Element or its ACG line.

The shoe in this review isn’t the ‘OG’ NMD but the updated version. While both are very similar, the first edition had a knitted collar band. There is currently a Primeknit version on sale as well, one which is closer to the original NMD in price and upper design. 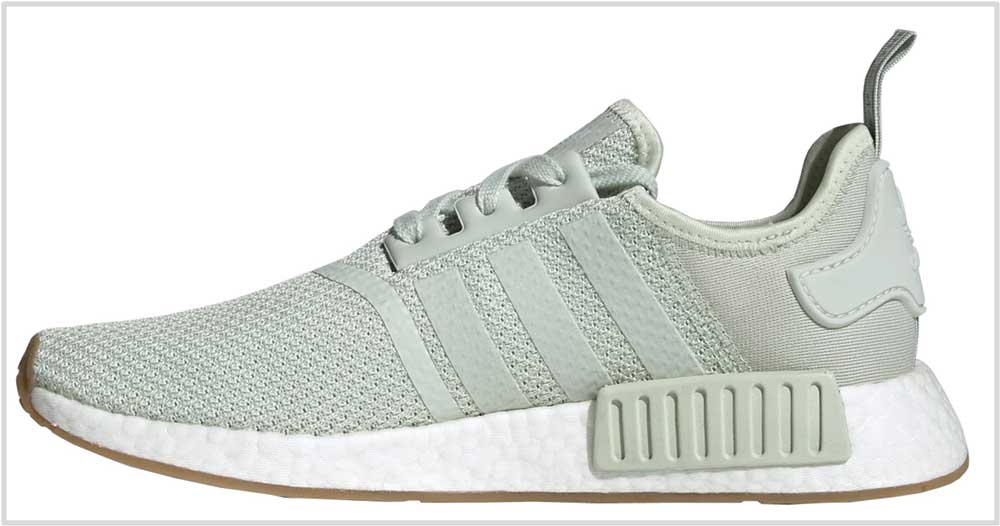 We’re not going to rate the NMD_R1 based on performance running parameters. Adidas is honest with its product positioning – this is a lifestyle sneaker, nothing more.

And as far as lifestyle sneakers go, the NMD_R1 is an extremely comfortable yet supportive kind. The NMD OG arrived nearly a year after the UltraBoost, so consumers accustomed to the Boost cushioning knew what they were in for. 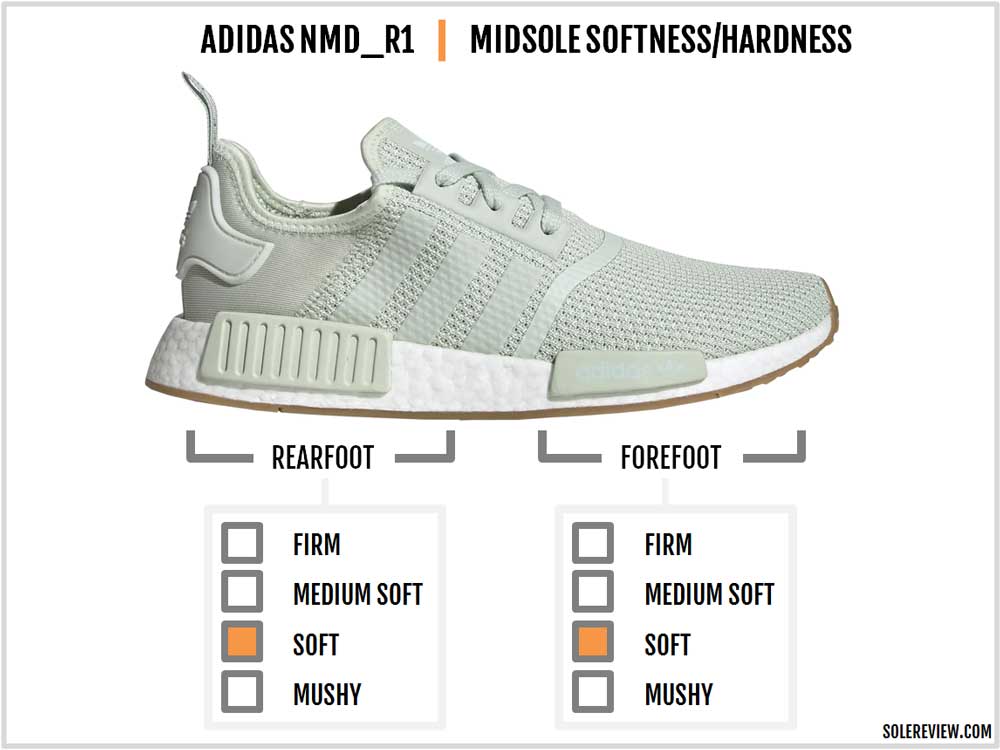 That implied, the NMD_R1 has a different ride quality than the UltraBoost. It is a bit firmer and more supportive in the heel. Here’s why:

The EVA foam plugs on either side of the heel aren’t mere color-blocking decorations. They are bridged together under the rearfoot upper in an U-shape so they’re more functional than you expect them to be.

This creates a stabilizing cup under the foot and makes the ride supportive. This is unlike the UltraBoost where the soft Boost midsole is attached directly to the upper.

There’s no removable insole on the NMD R1; the lasting doubles as the insole. The windows cut into it make it pliable and allow the foot to experience the Boost foam underneath. This is a design formula used by adidas for a very long time – we first saw this on the 2014 PureBoost.

A no insole shoe is always firmer than a shoe with it. The second layer of foam right beneath the foot makes a huge difference in step-in comfort, and that’s one of the primary reasons why the UltraBoost feels softer – or plusher – than the NMD. Perhaps, ‘plush’ is the right word here, instead of ‘soft.’

Of course, nobody’s stopping you from adding an insole of your choosing, but just know that it’s going to make the fit shallower and narrower. The thickness of the aftermarket footbed will eat into the available space.

The outsole is a factor as well. Depending on the variant, the NMD_R1 either uses a gum or carbon rubber outsole. The geometry doesn’t have the ‘Stretchweb’ layout seen on performance products, but one which balances outsole flexibility with hard-wearing zones. The NMD’s outsole is wider through the midfoot and adds to rigidity.

The traction is ok over most surfaces. You won’t get the traction of Continental rubber, but there’s nothing to complain about either. 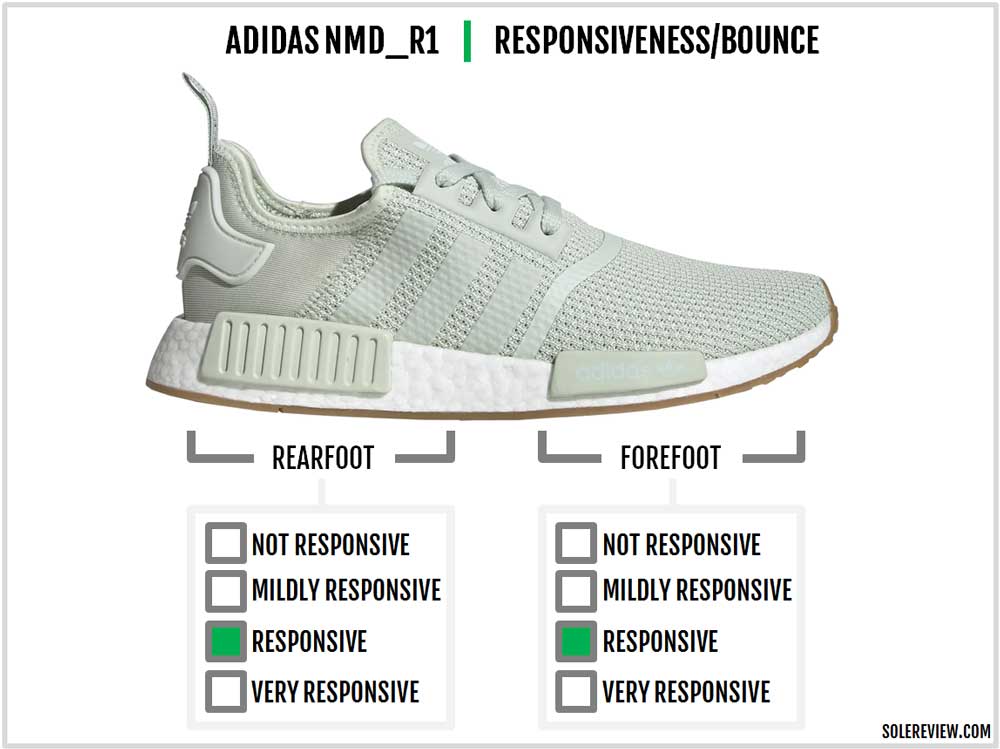 When viewed as a sneaker for daily use, there’s very little to nitpick about. The full-length Boost midsole has plenty of responsive cushioning for all-day comfort, and features like the color-blocking foam plugs and wide outsole add stability to the soft midsole.

It also helps that the upper isn’t very narrow.

IS THE ADIDAS NMD R1 DURABLE? 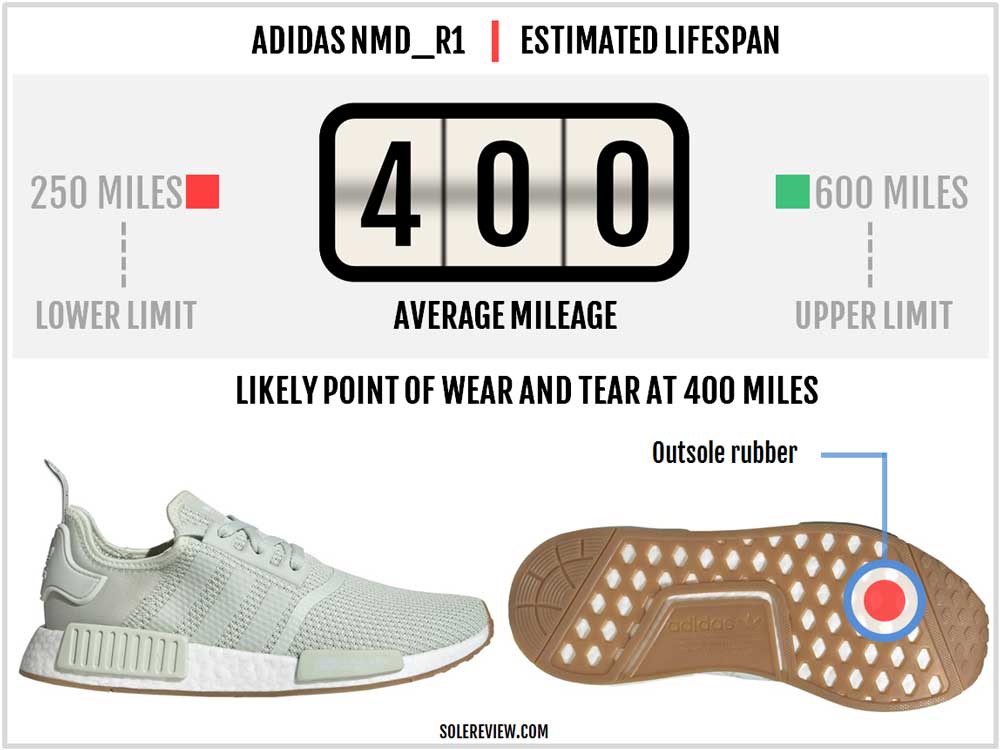 You can rest assured that nothing is even going to happen to NMD’s Boost cushioning. We’ve been reviewing shoes with Boost midsoles for over five years now, and we haven’t come across even a single instance of the midsole failing.

There’s no Continental rubber here so you won’t get the above-average outsole lifespan. At the same time, the NMD_R1’s rubber is durable enough to give you around 350 – 400 miles of useful life.

The upper is all mesh, but there have been no issues reported on the NMD_R1. 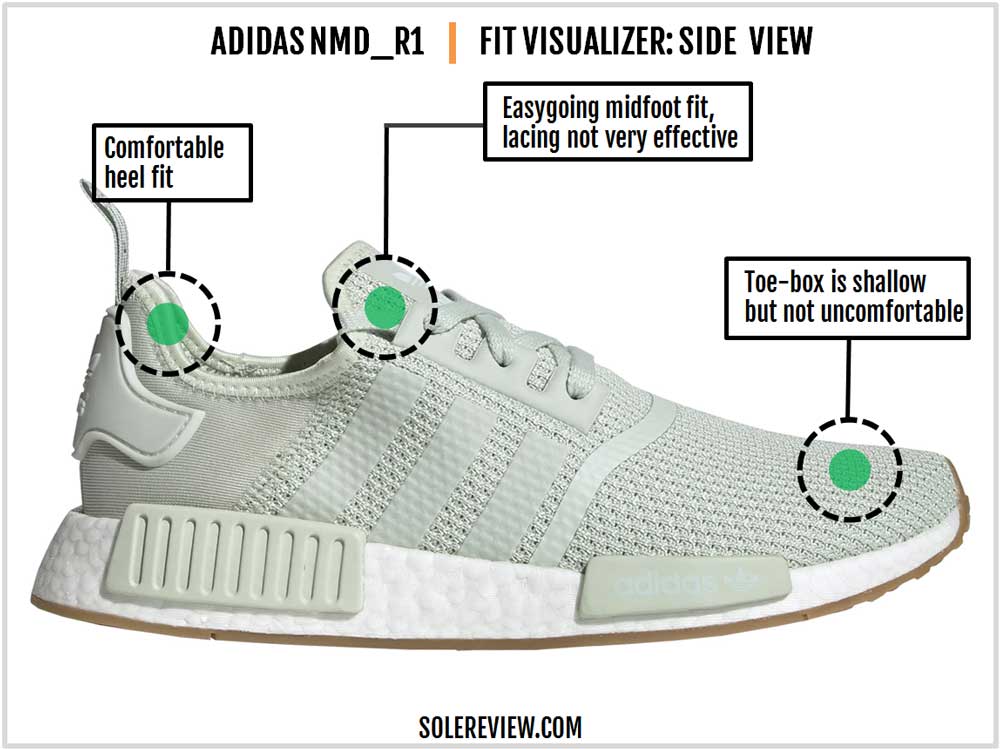 Unlike some adidas shoes with their tendon-crushing uppers, the NMD_R1’s upper has a snug but an easy-going fit.

The mesh is soft with a smooth interior, and that applies to the midfoot too – there are no stiff overlays. A subtle three-stripes branding is applied via thin, fused layering. So if you’re wary of the UltraBoost OG’s plastic cage, the NMD proves to be a better choice.

As mentioned earlier, the collar doesn’t have the knit band of the NMD OG. In its place are a foam-quilted heel lining and a piped collar with interlocking.

It’s not hard to get in and out of the sock-like upper; the long pull tab helps too. A rigid heel clip with the classic adidas Trefoil logo acts as a heel counter. 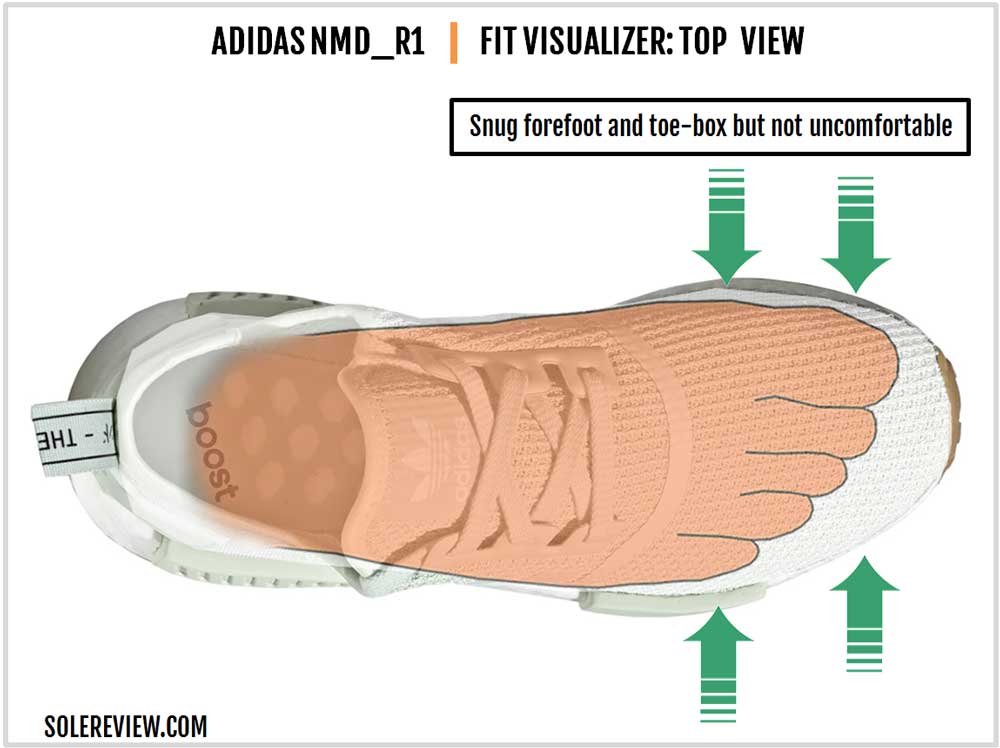 The laces aren’t very functional. It just makes sense to leave them tied and then use the NMD_R1 as a slip-on shoe. There are only three lacing rows and cinching them tight will only cause creases on the tongue.

But then, the NMD is a casual sneaker so there’s no loss of function here – the bootie upper feels secure enough during walking or standing.

Even though the NMD_R1’s upper is more spacious than many adidas models, you’re better off going true-to-size here. If you end up with extra room, it’ll come in handy after a long day after your feet swells in size. 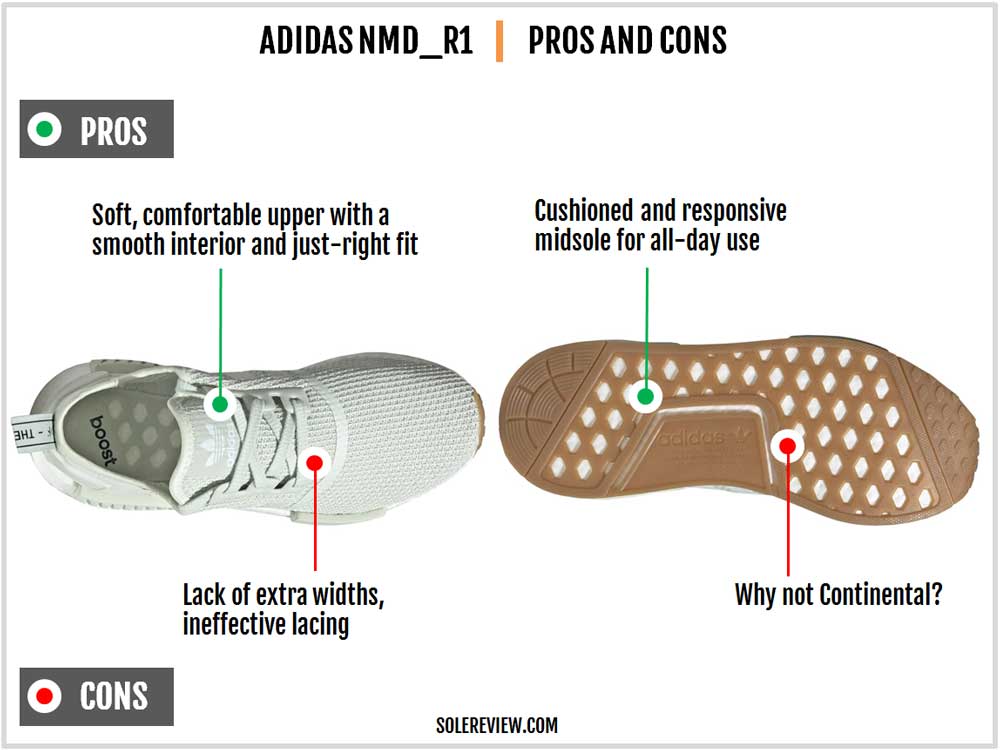 The lacing might not be very effective and the outsole isn’t made of grippy Continental rubber. But other than that, the NMD_R1 is a comfortable lifestyle sneaker for daily wear.

The full-length Boost midsole offers a substantial amount of underfoot cushioning comfort. The upper interior is soft, accommodating while being secure and breathable.

The firm EVA plugs add retro style and stability to the plush ride. 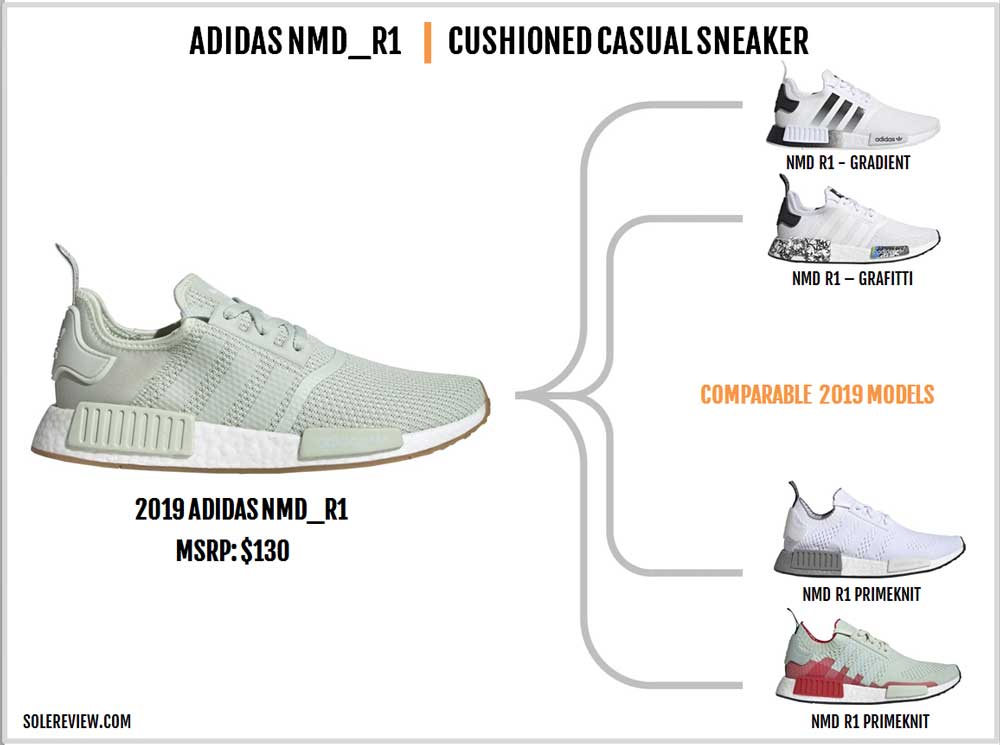 There’s an extended family of NMD’s which use the same midsole but with different upholstery.

The NMD R1 Primeknit, as its name suggests, has a stretchy knit upper. Also, if you want the ribbed collar of the original NMD Boost, you’ll find it on the Primeknit version.

There are a couple of Primeknit variations with minor differences. Among others, there’s one with a midsole color gradient and another with a graffiti-inspired design.