Brooks’s marketing pitch: Has the Guiderails support system plus soft yet responsive cushioning.

This shoes is called the Adrenaline but it is a radical evolution of long-continuing series. There's no medial post on the midsole - it's like a Brooks Ghost with raised Guide Rails. Still a good shoe, but know what you are buying.
Cushioned and supportive ride, secure and comfortable upper fit, multiple widths, outsole grip
Heavy, the new design might disappoint loyalists used to the feel of a medial post. 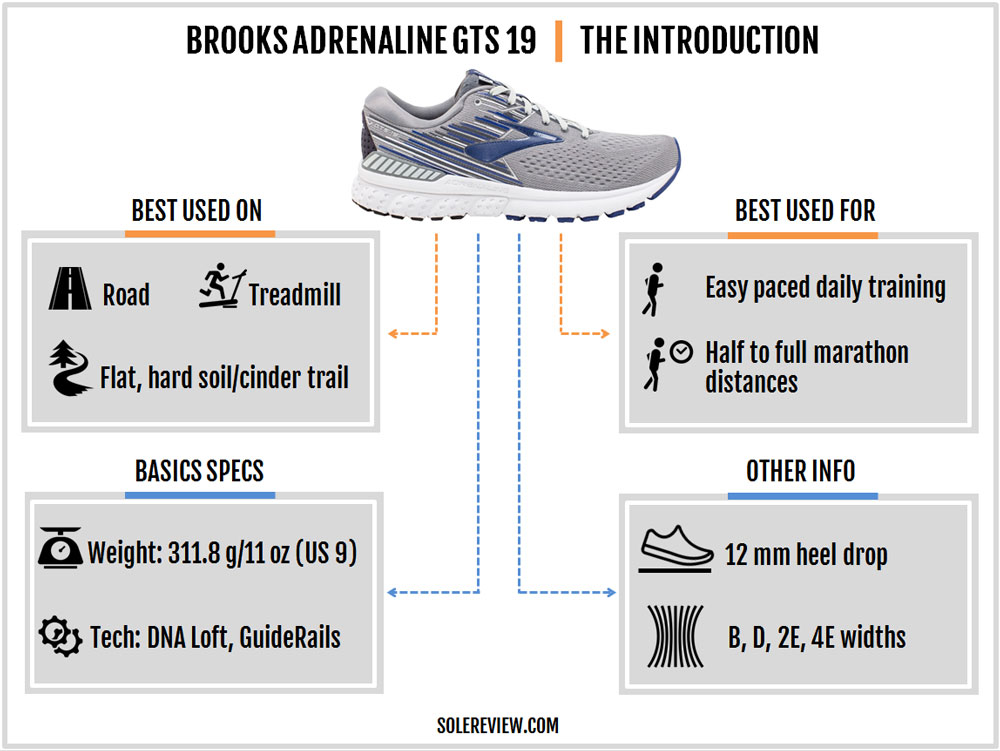 Our collection of so-called knowledge is a tangled mess of quantifiable facts, half-truths, and conventional wisdom of a make-believe kind.

Millions of pairs of ‘stability’ running shoes have sold based on the premise that ‘over-pronators’ need such products. A new industry was created around gait analysis, medial-posts, and what have you. Most people believed in this pseudo-science (a lot still do); even brands knew no better.

It’s not that the stability shoes were (initially) created to generate additional business. The origin of the medial post had a completely different intent, a story which is covered in detail here.

The 2014 Brooks Transcend was one of the first support shoes not to to have a medial-post, a formula which has since been copied by other brands.

Even back then, Brooks probably knew that medial-posts were functionally pointless in context of the modern running shoe design. Neutral running shoes with firm midsoles are supportive enough without having to make one side of the midsole firmer.

But like anything in life, it makes more sense to ease in a brand-new concept gradually instead of making an abrupt change. That is also the reason why Brooks chose to name the Transcend so instead of Trance – the shoe it was meant to replace.

This review is a case in point.

The Brooks Adrenaline GTS is the brand’s best-selling stability shoe, one which is often recommended by store associates for ‘over-pronators’. And as is the norm in running shoes from this category, the Adrenaline GTS had a hard inner midsole wedge. Until now.

The Adrenaline GTS 19 swaps the medial-post for a set of ‘guide rails’ borrowed from the Transcend.

This major update alters the Adrenaline’s character at a fundamental level. And just how? That’s what this review is about.

At the same time, if you like the feel of a medial post under the foot, look past the Adrenaline in favor of medially posted shoes like the Saucony Guide ISO 2 or New Balance 860V9.

In all fairness, Brooks should have named the shoe something else – because this isn’t the Adrenaline runners once knew. This is a completely different animal.

The GTS 19 is unlike any Brooks Adrenaline you’ve run in before. The 12 mm drop midsole is still dual-density, but of a completely different kind. Unlike the GTS 18 which had a firmer medial post attached to a single-density midsole, the GTS 19 has a DNA Loft crash pad on the outer side. 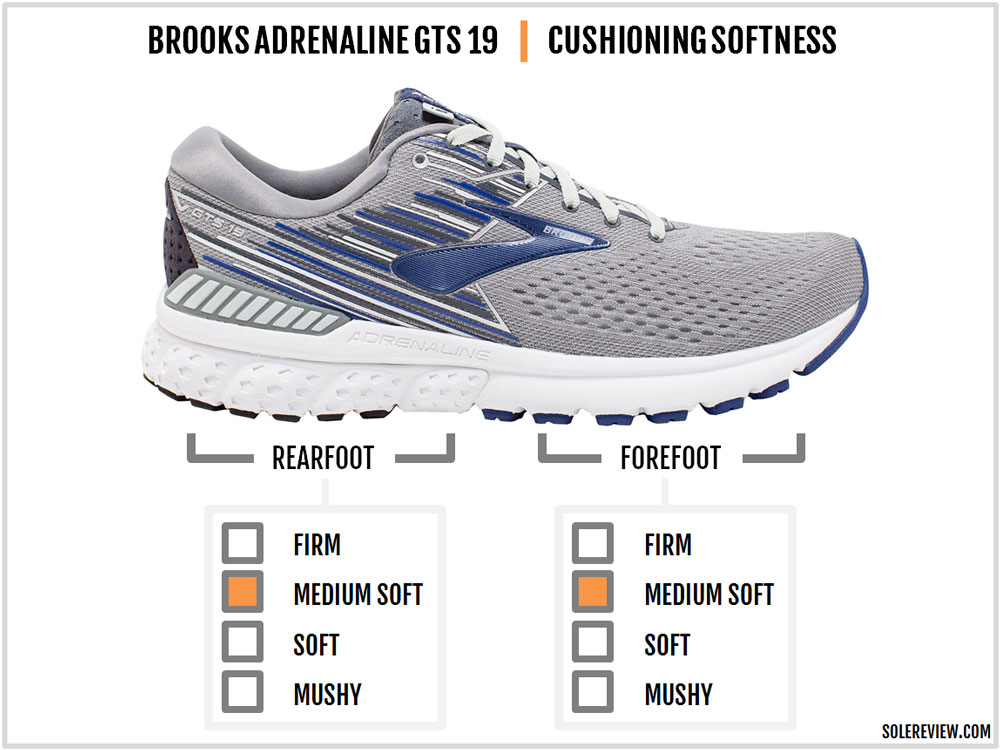 The inner midsole doesn’t have a medial-post and is softer than the outer side. So that makes the GTS 19 what – a reverse Adrenaline?

The Adrenaline has also become progressively softer over the years. The GTS 18 was softer than the 17; and when you compare the 17 to versions such as the GTS 14 then you’ll realize what we’re talking about. Incidentally, the Adrenaline 14 was the last time this model featured a separate heel crash pad.

With the DNA Loft wedge being the initial point of contact for rearfoot strikers, the GTS 19 feels firmer than the 18. Because no matter what Brooks says, the DNA Loft foam isn’t soft. It is, in fact, harder than the Biomogo foam used on the 18. The insole provides some cushioning, but once you’re past that, one sense the added firmness of the midsole.

If there’s no medial post, how is the Adrenaline a support shoe? Well, it’s one in the same way the Transcend is. The midsole is similar to the Ghost, except that there’re a couple of ‘Guide Rails’ on top.

These pieces of foam are glued (they will be co-molded on the GTS 20) to the midsole edge, thus raising the sidewalls for a cupping effect. While we’re highly skeptical of how these small pieces of foam can result in gait correction of any kind, they do provide an enhanced sense of under-arch support.

It’s interesting to note that the Guide Rails on the outer side are made of a softer foam than the arch side. This is true for the Transcend 6 as well. And this isn’t noticed unless you touch it. The foot rolls to the inside during the gait cycle so the outer Guide Rail isn’t part of the sensory experience.

Even without the Guide Rails, the Adrenaline is stable. The DNA Loft crash pad makes the lateral side firmer than the 18. The single-density forefoot is also cushioned and supportive.

The outsole hasn’t changed a lot. Only the midfoot has its half-shank replaced by a foam pod; the rest of the outsole feels the same. The blown rubber forefoot provides good traction and helps with the cushioning too.

The GTS 19’s removable insole is still made of the smooth, molded DNA foam instead of the blown foam Ortholite version we’ve been seeing on Brooks shoes lately.

We don’t know if the GTS 20 is going to switch to Ortholite, but we prefer the existing insole. The molded foam goes well with the midsole material to make the ride smooth. The Ortholite is soft to step on, but it feels like a separate layer of softness over the midsole.

The new Adrenaline sounds the death knell for the medial post. So if the sense of a firmer wedge under your arch was one of the reasons why you bought the Adrenaline, you should give the GTS 19 a pass. Instead, scroll down to the last section of this review for alternatives. At best, the GTS is a supportive neutral trainer with plenty of cushioning. 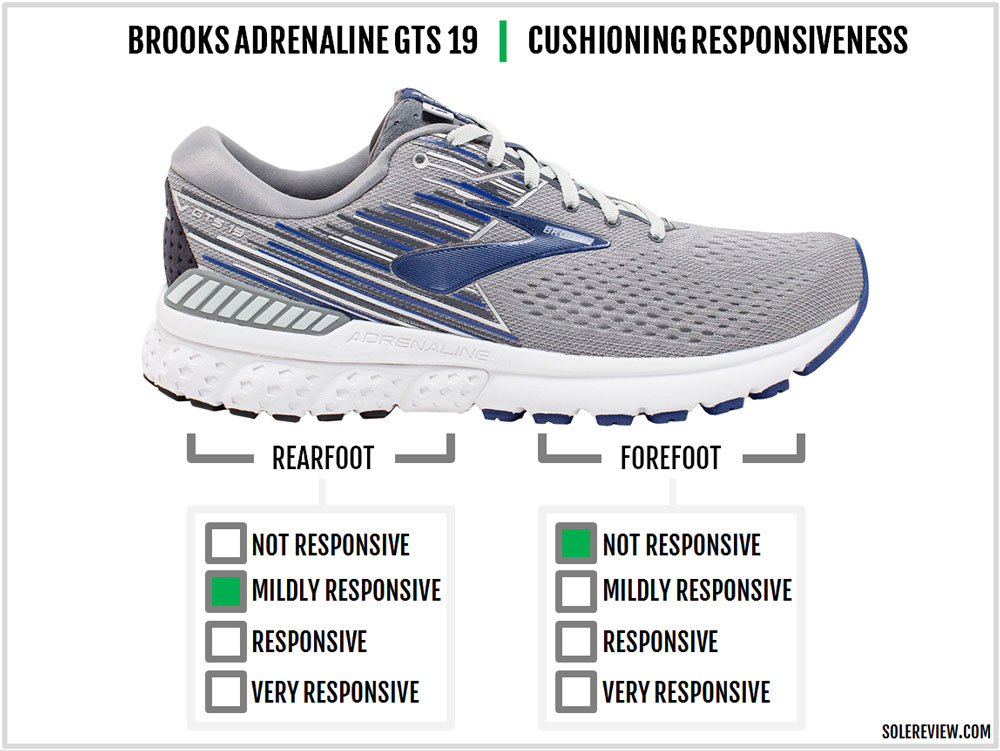 On the other hand, the Adrenaline GTS 19 is a competent daily trainer. The GTS weighs 11-ounces so it’s not the fastest shoe in town, but for everything else, it does just fine. 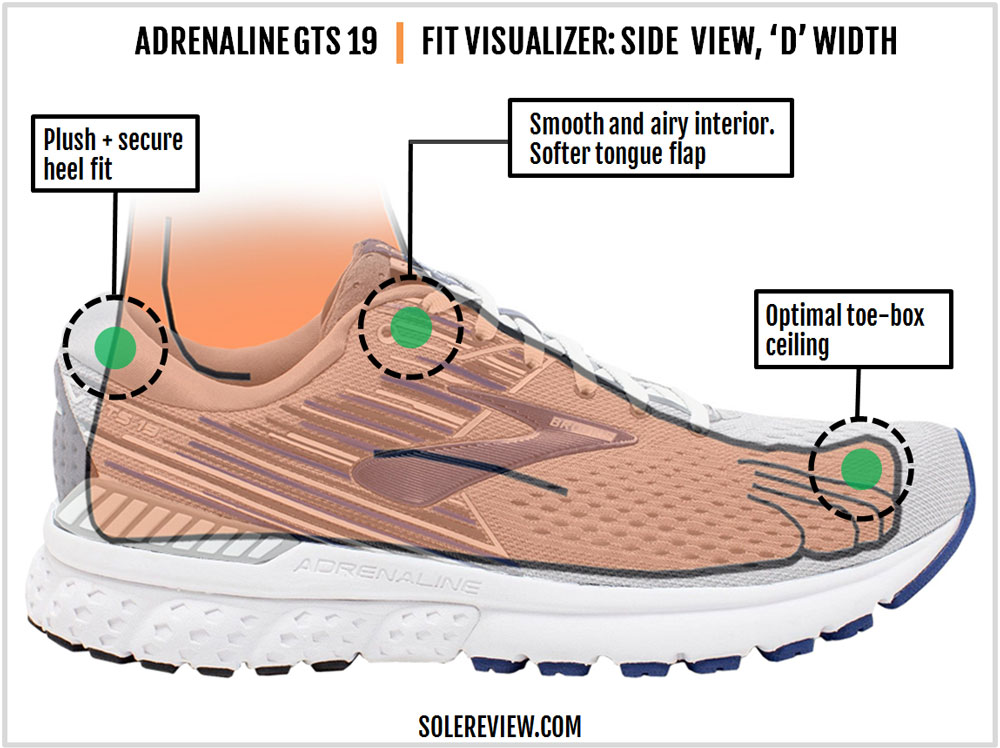 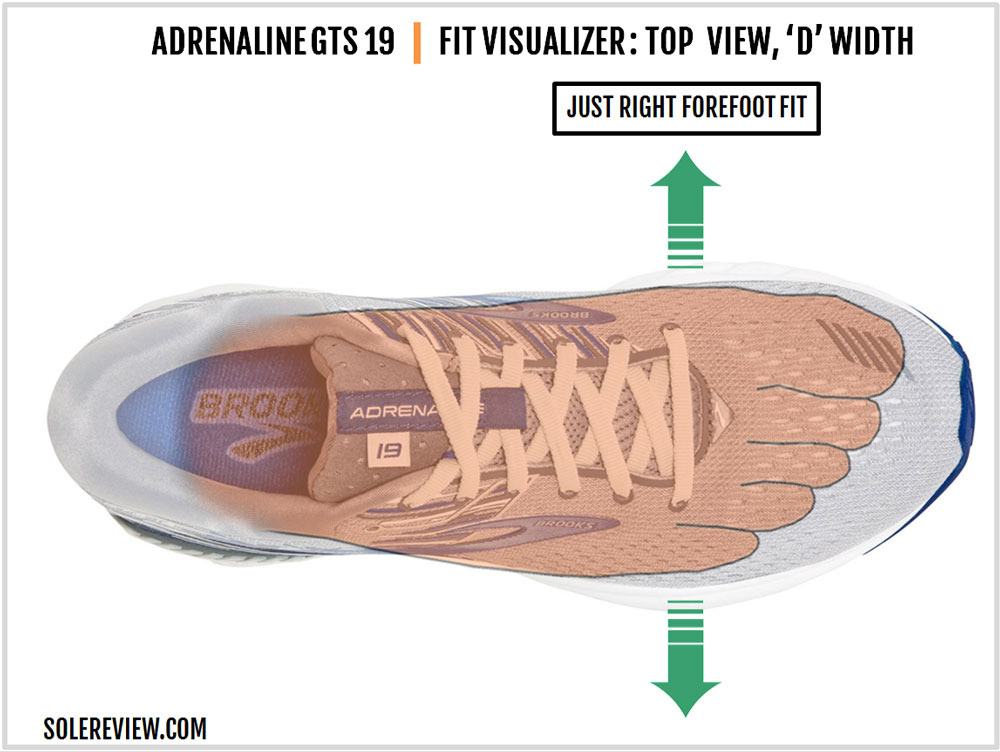 The Adrenaline GTS 19’s fit is very similar to the 18 with a true-to-size profile. The toe-box and forefoot have enough room, and the engineered mesh creates a smooth and breathable interior.

If anything, the GTS 19’s upper is softer and loses some bling over the 18. There’re no glossy trims over the toe-box and the lacing eyestay. The tongue uses a softer synthetic suede flap which feels softer on the foot.

The heel also changes its lining material, using a smooth mesh over plenty of functional foam padding. There are no hot spots, and the upper holds the foot securely during runs. 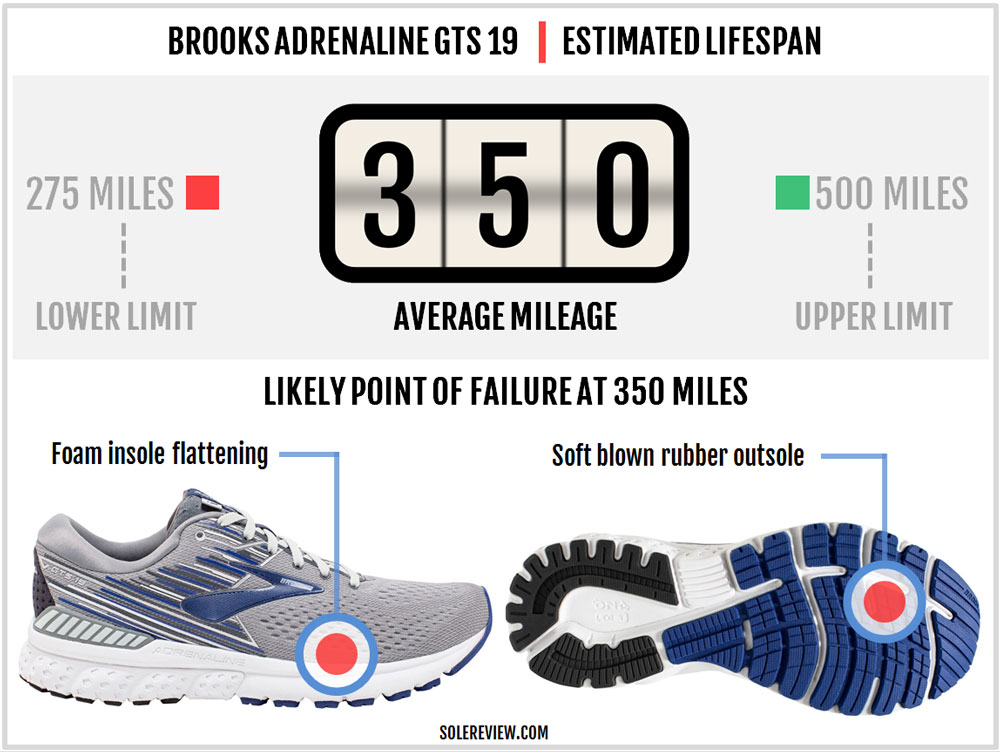 Expect around 350-400 miles out of the Adrenaline. There’s plenty of rubber on the outsole, and the midsole material doesn’t lose its cushioning for a long time. The insole will compact over time, nothing outside the wear and tear process.

Nothing is amiss on the upper design, so it should outlive the outsole. 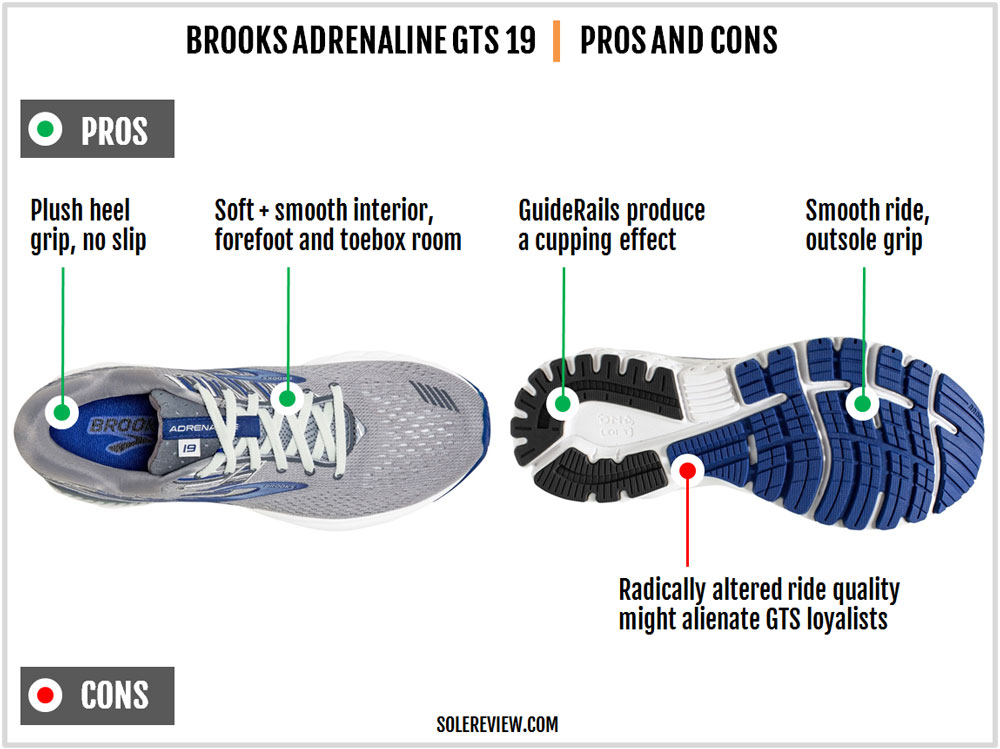 The Adrenaline GTS 19 has changed so much that it might alienate runners who liked the medially-posted Adrenaline. Otherwise, the ride is very comfortable – the cushioned midsole resembles that of the Ghost, just without the Guide Rails.

Whether the Guide Rails really work  – with respect to gait correction – is debatable, it does add a sense of under-arch support by cupping the foot.

The upper is also very comfortable, smooth-fitting and has the just-right amount of room. Brooks offers four widths on the Adrenaline, ranging from a B (narrow) to a 4E (extra wide). 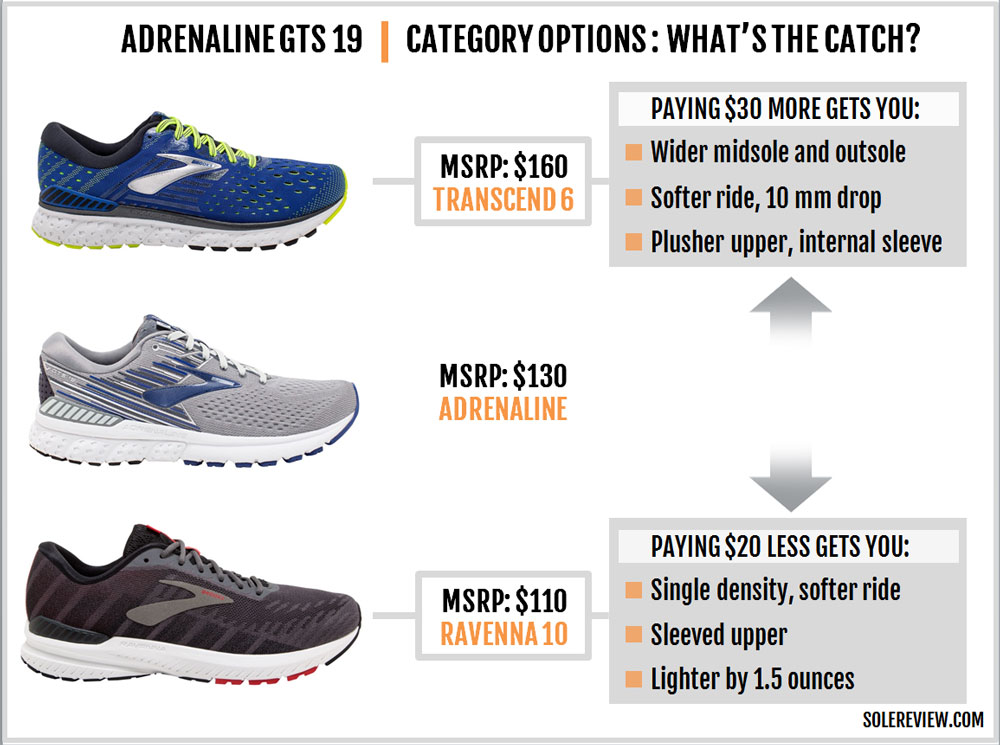 Going down $20 buys you the Ravenna 10, a lighter support shoe with small Guide Rails.

A price upcharge of $140 leads to the Transcend 6, a beefier version of the GTS 19 with a wide outsole, more cushioning, and bigger Guide Rails. 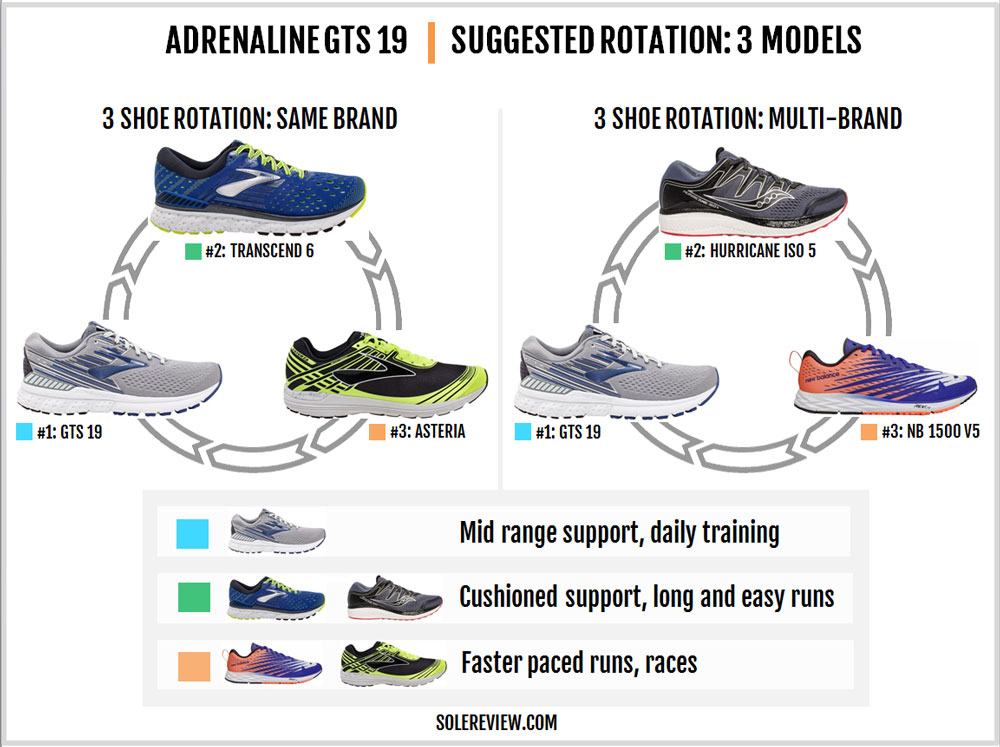 If you want to stay within the Brooks’s family of shoes, there are two options. You can go higher support (vs. the GTS 19) with the Transcend 6 or opt for a lighter shoe in the form of the Ravenna 10.

You can also substitute the Transcend with the Saucony Hurricane ISO 5. While the Brooks Asteria works for race-days, we recommend either the Saucony Fastwitch 9 or the New Balance 1500V5. 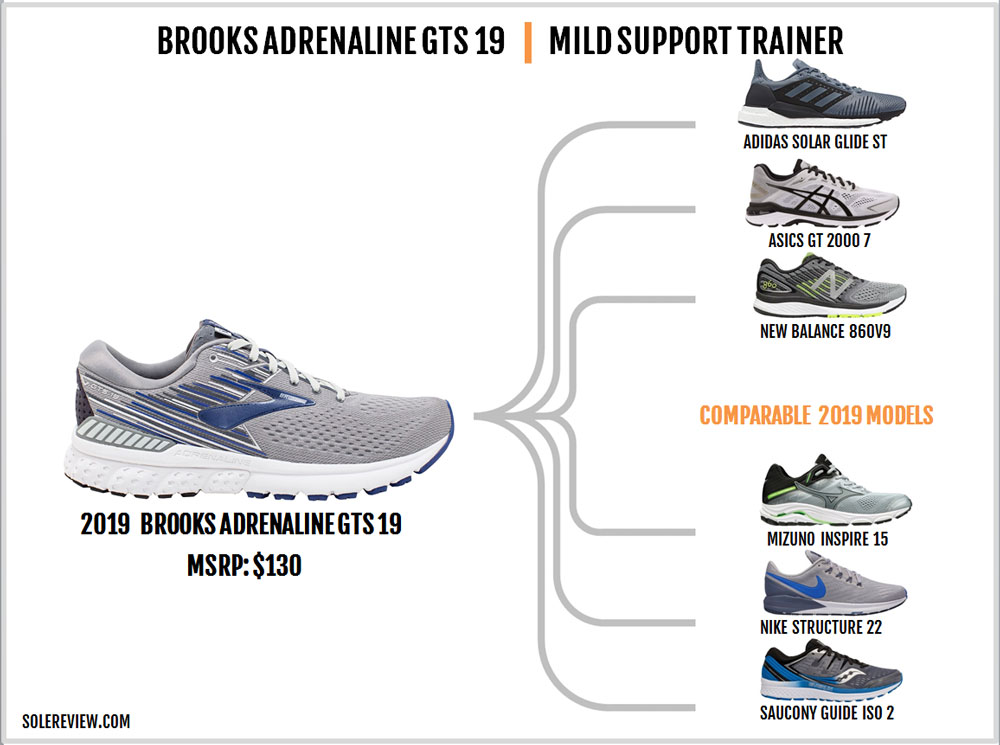 The Brooks Adrenaline GTS 19 has split with its medial-post but most of the shoes in this category are still married to one. So if you don’t like the idea of an Adrenaline GTS without a medial post, this section is for you.

Starting alphabetically, the adidas Solar Glide ST is a much softer shoe but has something in common with the GTS. Its midsole has raised edges which adidas calls ‘Solar propulsion rails’ – but they serve a similar function as the GuideRail.

The Asics GT-2000 7 is a recent update to the popular series. It doesn’t feature anything new, just a continuation of the old formula. Simply put, there’s a firm medial posted midsole along with a mesh and synthetic leather upper.

Treat the Brooks Ravenna 10 as an ‘Adrenaline Lite.’ The new Ravenna 10 has smaller Guide Rails over a single-density midsole. It’s got a lighter build which weighs 1.5 lower and has a snugger upper with an inner sleeve.

The Inspire 15 has its Wave plated midsole and a softer upper for a supportive and roomy fit. The New Balance 860V9 is a very traditional stability shoe with a medial post and a tri-density midsole.

The the Saucony Guide ISO 2 is like the Ride ISO but with a medial post. It’s got a comfortable and sleeved ISOFIT upper over a firm midsole. The Structure 22 is Nike’s take on the stability shoe – it has a firm ride with a conforming upper fit.