Asics’s marketing pitch: The GT 2000-7 has plenty of stability, designed for athletes who love to run. 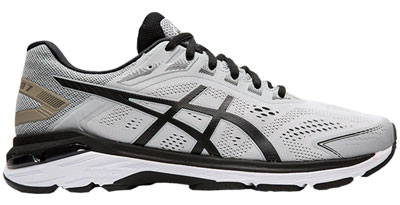 Buy from Roadrunnersports
Fear not, the GT-2000 7 has all that you expect of this shoe. There's a medial post co-molded into a cushioned midsole, and the smooth-fitting upper has enough room inside.
Cushioned and supportive ride, smooth and spacious fit, widths, relatively lightweight
Tongue slide, spacing between the forefoot lugs create pressure points 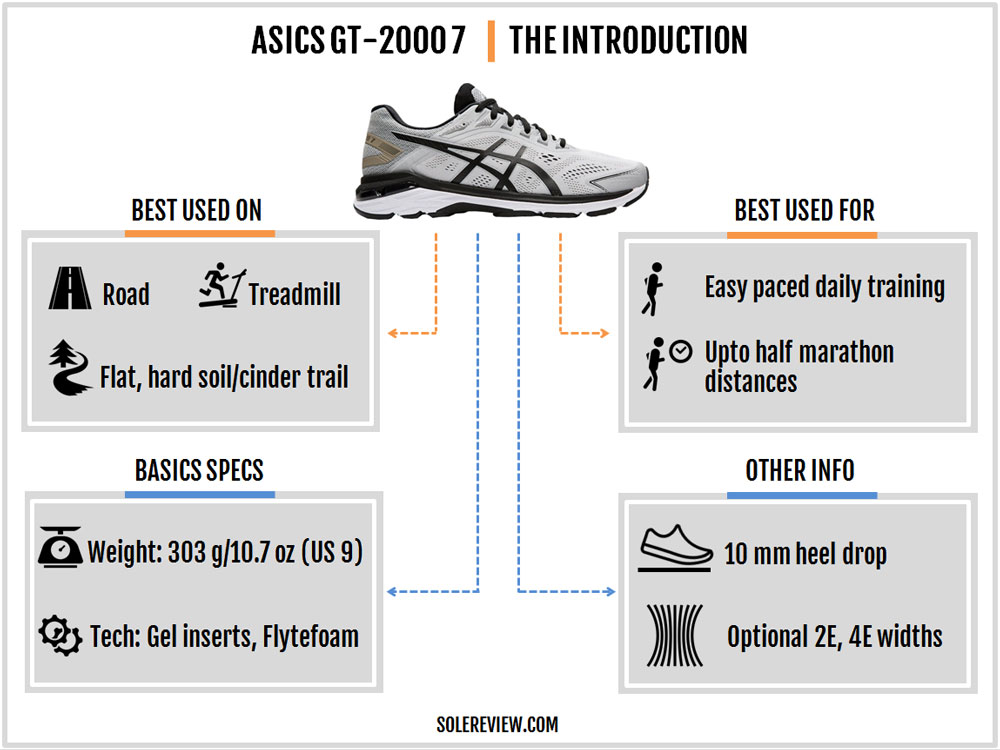 The Asics GT-2000 7 is one of the most popular models in the medially-posted running shoe market. Its design relies on a time-tested stability shoe formula, the kind which uses a firmer medial-post on the inner midsole.

This shoe occupies the spot between Asics’s signature Kayano 25 – which is a much heavier shoe – and the entry-level GT 1000 7. The Flytefoam equipped GT-2000 is lightweight for its class (sub 11 ounce) and is a versatile daily trainer of the medially-posted kind.

The GT 2000 doesn’t do a Brooks Adrenaline GTS 19 this year; it remains mostly untouched. So much so that Asics recycles the same midsole and outsole design from the GT-2000 6.

Asics isn’t known to reuse tooling (molds) whenever they release model updates, so this is a first. This also means that the GT 2000 7 is just a minor refresh with the same ride quality as the 6th version.

All the updates have to do with the upper fit and feel, and the result is a GT with more upper room. 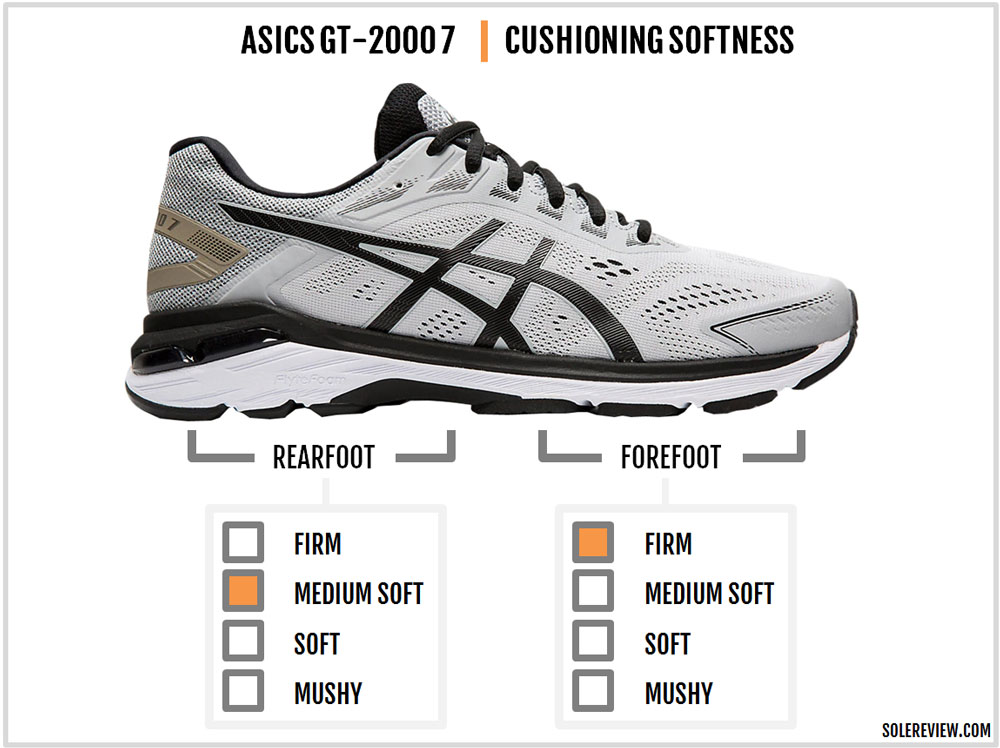 One of the nice things about the GT 2000 7 (and 6) is that its medial-post doesn’t feel invasive, nor is there a noticeable bias towards the outer side.

Even visually, it’s hard to tell the Duomax medial post apart from the midsole; it is co-molded into the Flytefoam midsole. 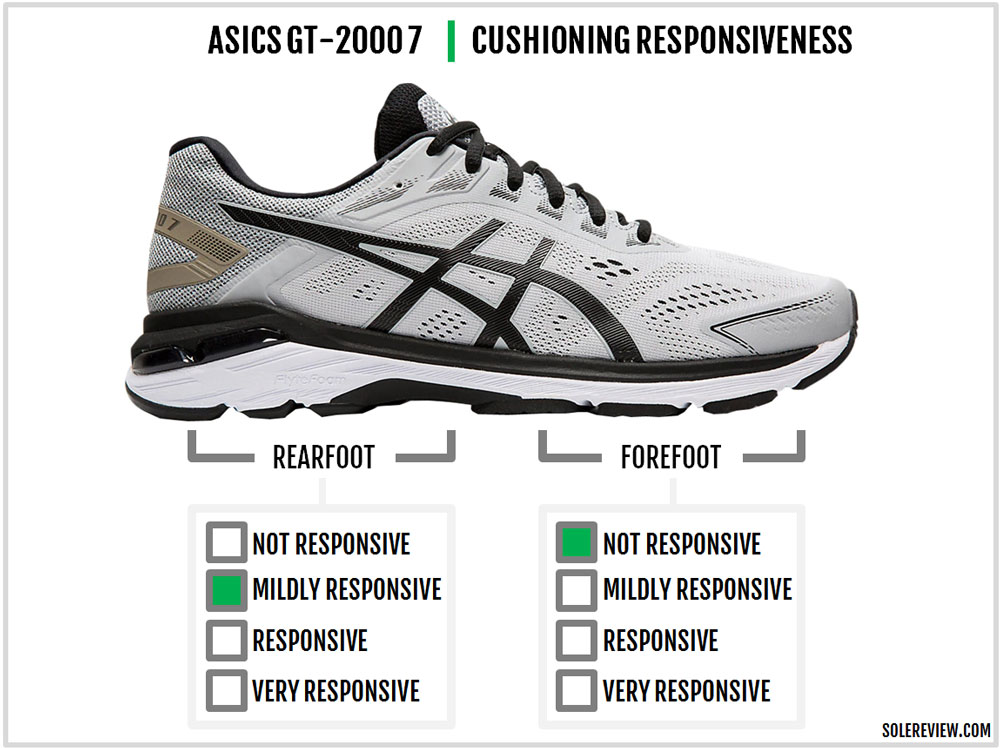 The firmness of the Flytefoam comes in handy here. A full-length layer placed below a layer of EVA foam adds support and keeps the weight lower than EVA foam based GT-2000’s. The uniform stacking of both the foams makes the ride smooth as well.

The midsole has plenty of cushioning, just not the soft kind. The Flytefoam and EVA foam layers are evenly matched in softness and together, they produce a medium-soft ride which doesn’t feel as clunky as the Kayano 25.

As always, the ‘Gel’ part of the midsole is merely decorative and plays a non-existent role in the overall cushioning. 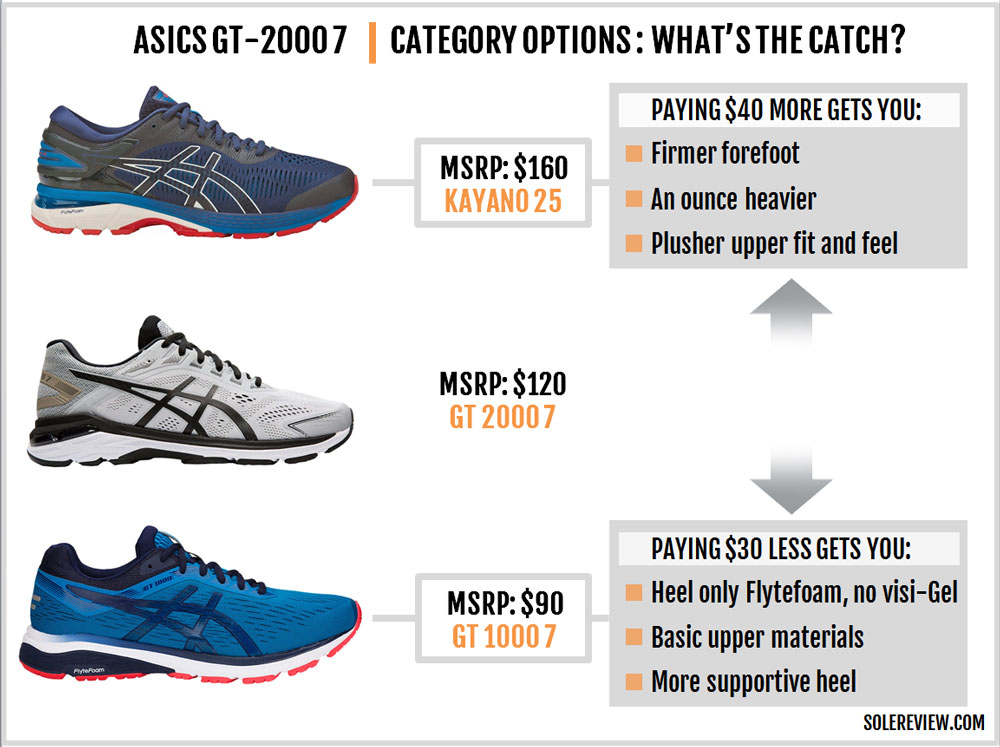 Its 10.69 ounce weight is one of the reasons why the GT is more versatile than the Kayano. The K-shoe weighs nearly 12-ounces and has a forefoot made of rigid Flytefoam. Unless a plush upper is an important purchase influencing factor, you should buy the GT 2000 instead of the Kayano.

Even the $90 GT 1000 7 is far better than it once used to be. The Flytefoam isn’t heel-to-toe like the GT but the absence of the visible Gel pad and the rubber footbridge makes the rearfoot supportive.

The GT 1000’s outsole is also nice; the forefoot has Vomero 12 like blown rubber pods which grip and cushion at the same time. The GT 1000 lacks a plastic shank so it’s a half-ounce lighter than the GT 2000. If you can do with a slightly lower level of upper plushness, the GT-1000 7 isn’t a bad buy.

Among the three, the GT 2000 has the smoothest ride. That’s because the other two – the Kayano and the GT 1000 – do not have a uniform stack of Flytefoam and EVA from the heel to toe.

The Guidance line hasn’t been corrected on the GT-2000 like on the Nimbus 21. With the existing design, this transition groove creates wide spacing between the outsole lugs.

The gap makes the edges of the lugs felt underfoot. This has been a recurrent issue with the Asics sole design, and it’s surprising how long it’s taken them to fix it on the Nimbus. Based on the latter, it appears likely that the GT-2000 8 will feature this revision. 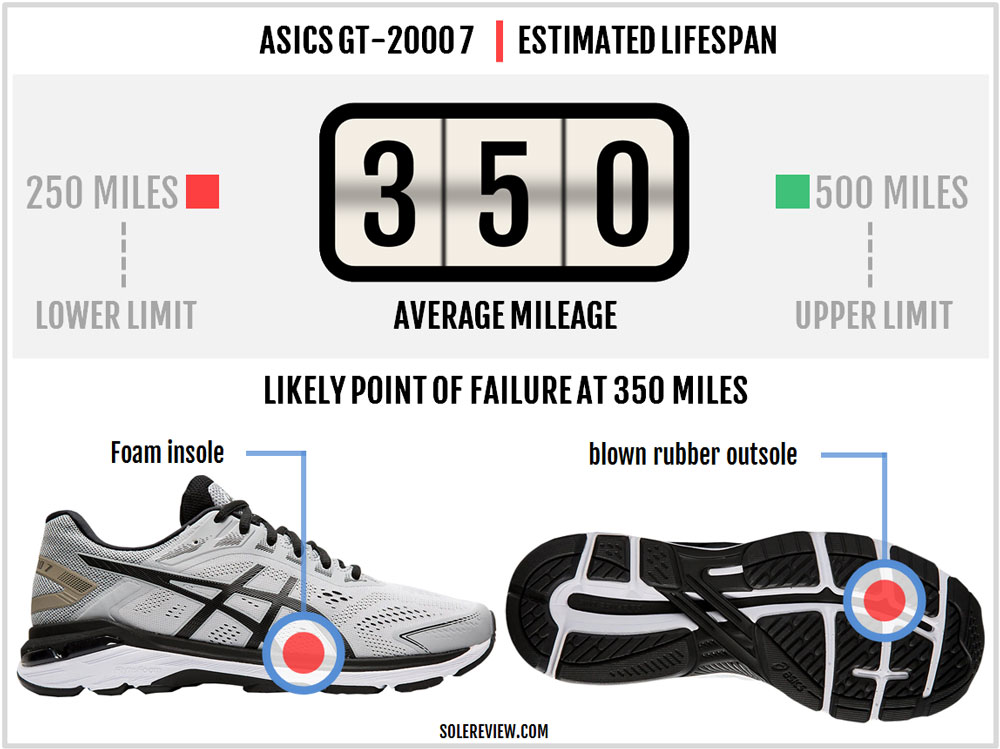 The rubber lugs provide enough traction – the blown rubber pieces are slightly short on life but grip well. The wide spacing between the rubber pieces is one of the reasons why wear and tear happens in a localized area. 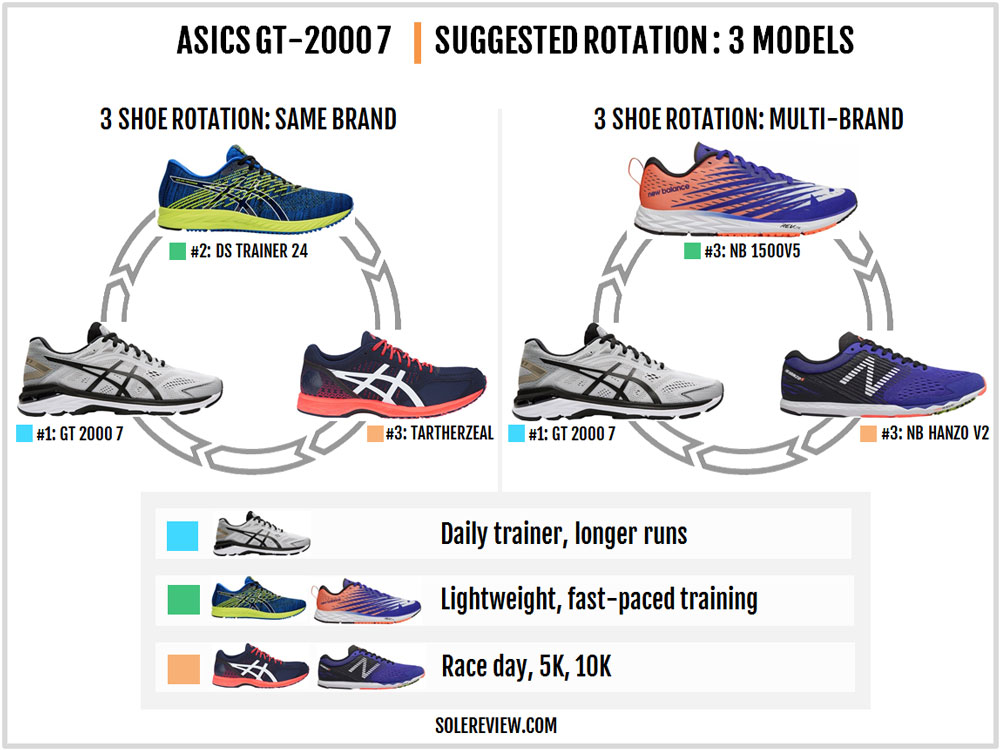 Given its balanced ride character, the Asics GT 2000 7 is a versatile daily trainer and the occasional long run shoe.

While it doesn’t feel like a brick when doing faster paces, it’s better that you consider firmer and lighter shoes such as the DS Trainer 24 or the New Balance 1500V5 instead.

The new DS Trainer has an improved and more comfortable upper over a firm midsole which is ideal for faster runs. For races, the Asics Tartherzeal 6 or the excellent New Balance Hanzo S V2 are great performers. 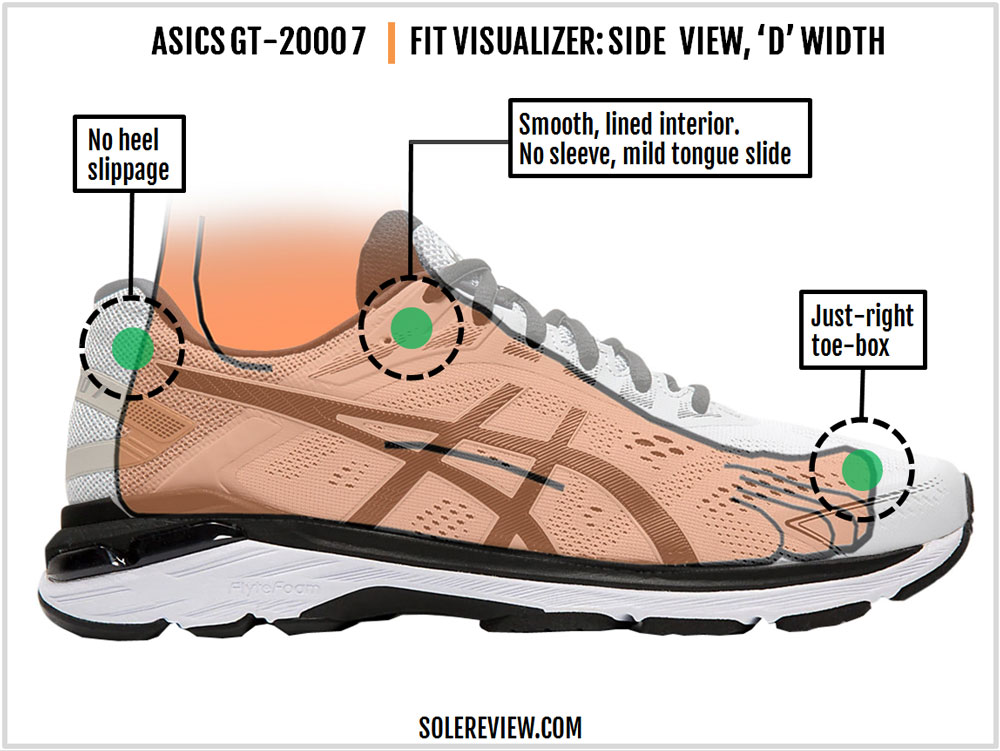 The upper doesn’t a sleeve anchoring the tongue so there’s a bit of movement during runs. Apart from that, the GT-2000 7 has a comfortable upper fit. The midfoot and forefoot are completely lined inside so the interior has a seamless feel. Taking out the lateral strapping system (which was there on the GT 2000 6) adds smoothness too.

Asics uses a new last for a better fitting forefoot and toe-box. The heel also doesn’t curve in as much as the GT-2000 6 did – it’s got a straighter profile which doesn’t push the foot forward. This creates increased toe room while maintaining a true-to-size silhouette. 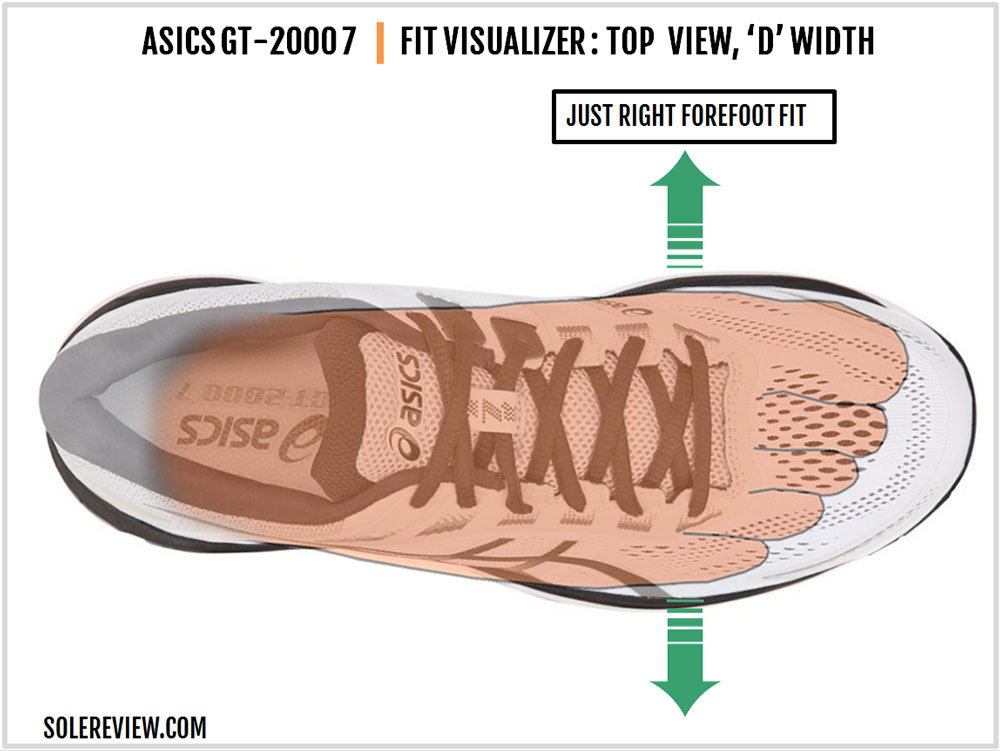 The GT-2000 7’s upper design is all about reducing complexity. The external heel no longer has the decorative molding, and even the synthetic over the tongue flap is gone, thus making it softer.

There’re fewer overlays on the GT-7’s toe-box and that also helps with the fit. At the same time, the GT 2000 7 gets rid of the strapped lacing on the outer side. Only the inner lacing is connected to a strap for medial-side support.

In short, the GT-2000’s upper is very much an Asics fit of old. There’s enough splay room and the interior fit is seamless. The fit character isn’t outstanding but is meant to please most runners; and that’s exactly what it does. 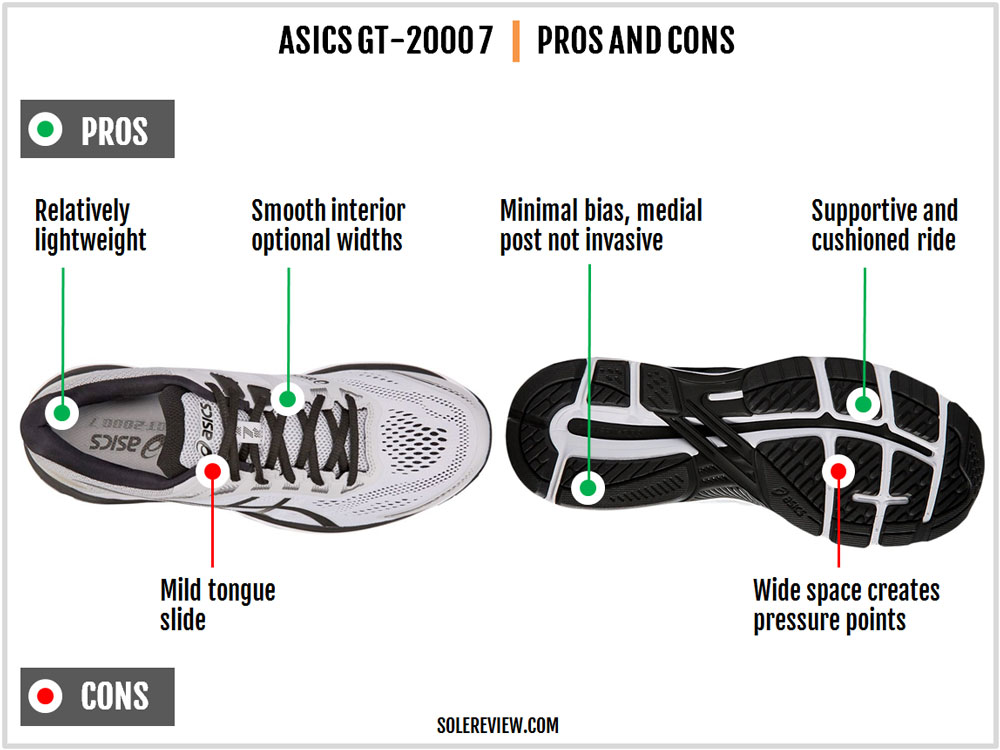 There are several things which the GT 2000 7 is good at. Its medial-post (DuoMax) is integrated nicely with the midsole and provides inner-side firmness without making itself conspicuous.

For a multi-density shoe with a full outsole, the sub-11 ounce isn’t a lot. That also makes the GT more versatile for a wider variety of workouts. The ride is cushioned while being smooth and supportive. The upper has a very smooth interior, and the mild tongue slide is the only negative we thought of pointing out.

The Guidance line creates too much spacing between the forefoot lugs, thus creating a pressure spot around the edges of the slab. We know that Asics has remedied this (somewhat) on the Nimbus 21, but the GT-2000 7 still has it. 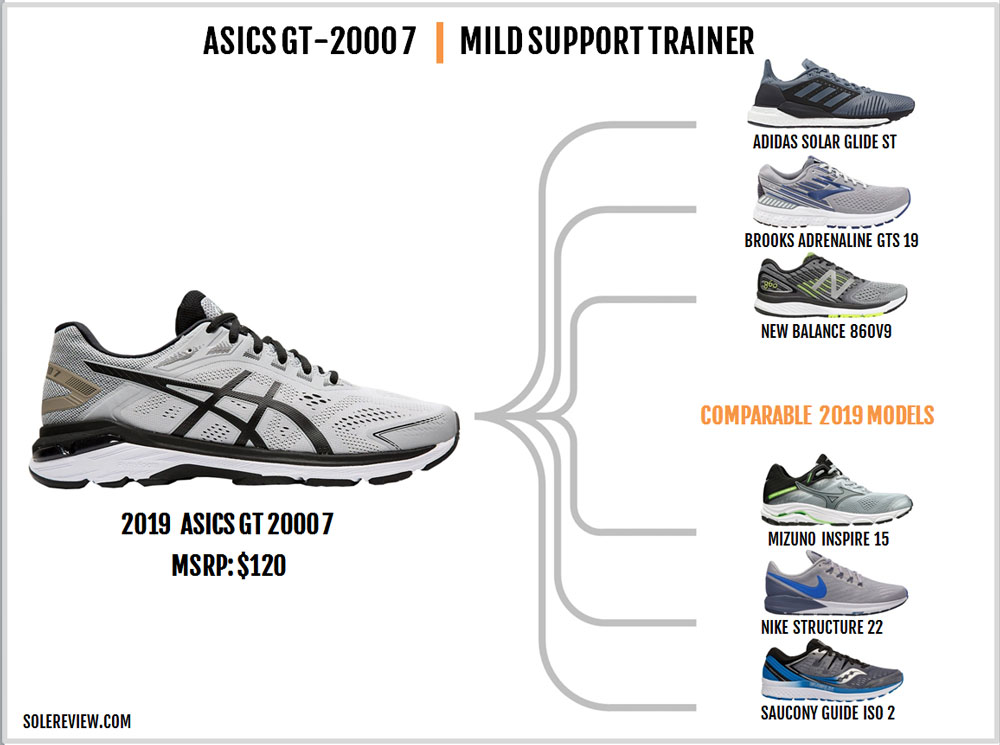 There are several stability shoes with medial posts keeping the GT-2000 company. The trail version of the GT 2000 7 is the closest match – because the latter’s design is nearly identical. Only the outsole has slightly modified lugs but it has very little effect on the functionality.

The ‘Trail’ version is mere window-dressing; it doesn’t even have a gusset or different mesh to keep the dust out. Thankfully, the price is the same, so treat the GT 2000-7 Trail as just another color of the standard model.

Other stability shoes in this class include the New Balance 860V9 – a firm, medially-posted shoe with a supportive ride – and the Saucony Guide ISO 2 with its cushioned yet stable ride. The Structure 22 is also an option in the firm-stability shoe class.

Some models have opted out of the whole medial-post business. A recent convert is the Brooks Adrenaline GTS 19 which ditches its medial-post for GuideRails.

The adidas Solar Glide ST is similar to the GTS 19 in that aspect – the midsole has firm rims attached to its edge. The Glide ST is the softest shoe on this list, just in case you were looking for one.

The Inspire 15 runs its stability operation with the neutral and supportive Wave plate, no change there.