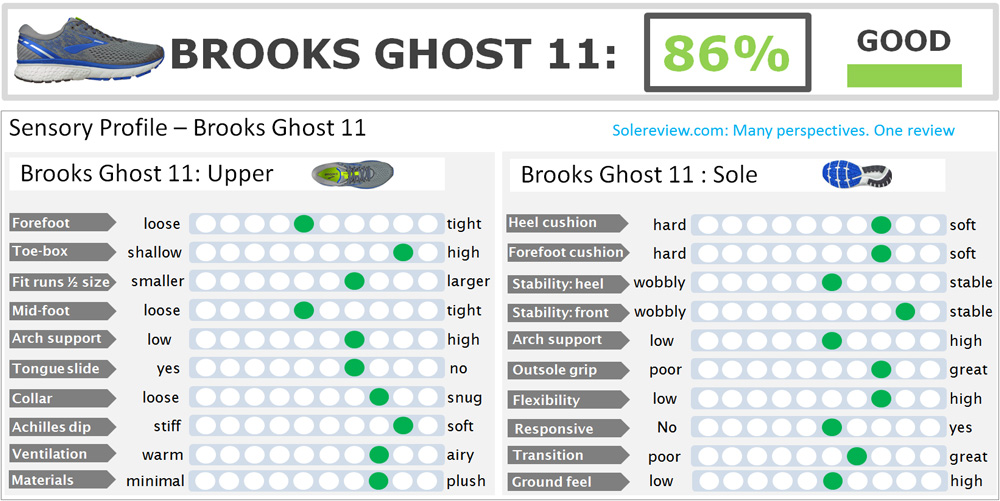 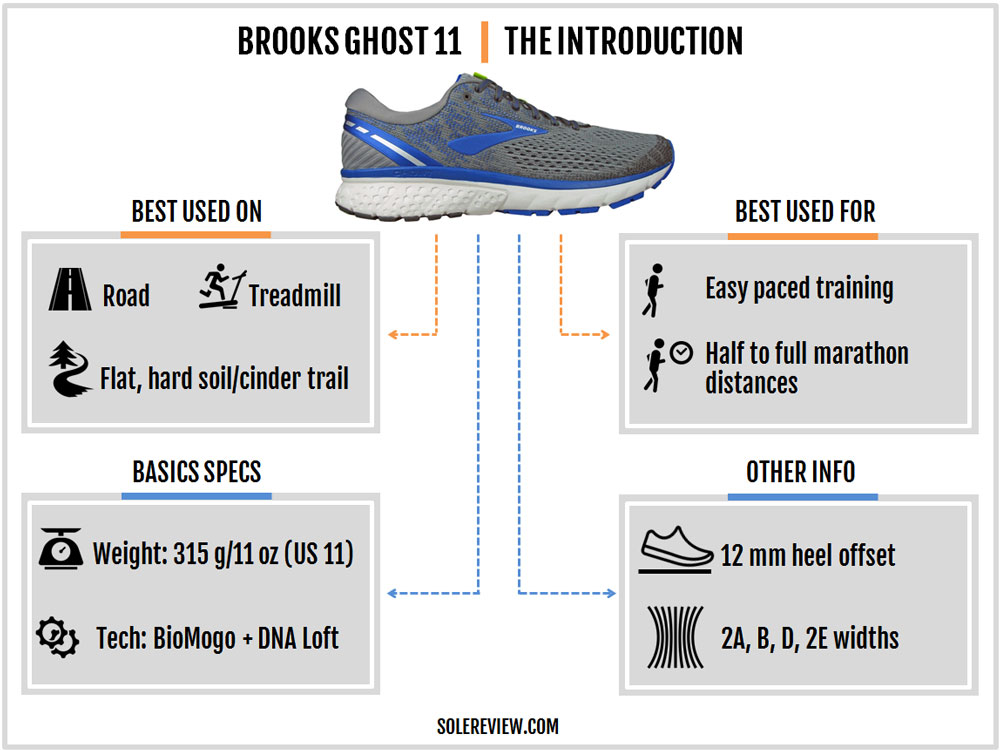 Both of Brooks’s neutral cushioning crown jewels – the Ghost and the Glycerin – have been very consistent in form and function.

Sure, they have evolved over the years. Cushioning technologies have been swapped a few times. The upper design has kept up with the times, eschewing the messy cut, stitch, and assemble approach for a cleaner form factor.

Despite all that change, the neutral cushioning duo has retained most of their fit and ride traits. Their ride quality has always occupied a sweet spot between the cushioning and support ends of the spectrum.

In Brooks’s line construct, the Glycerin has the upper hand in materials and cushioning technology. Take the Glycerin 16 (and now 17) for example. The Glycerin has a full-length DNA Loft midsole (the Ghost gets only a crash pad) and a fully-loaded upper to go with it. 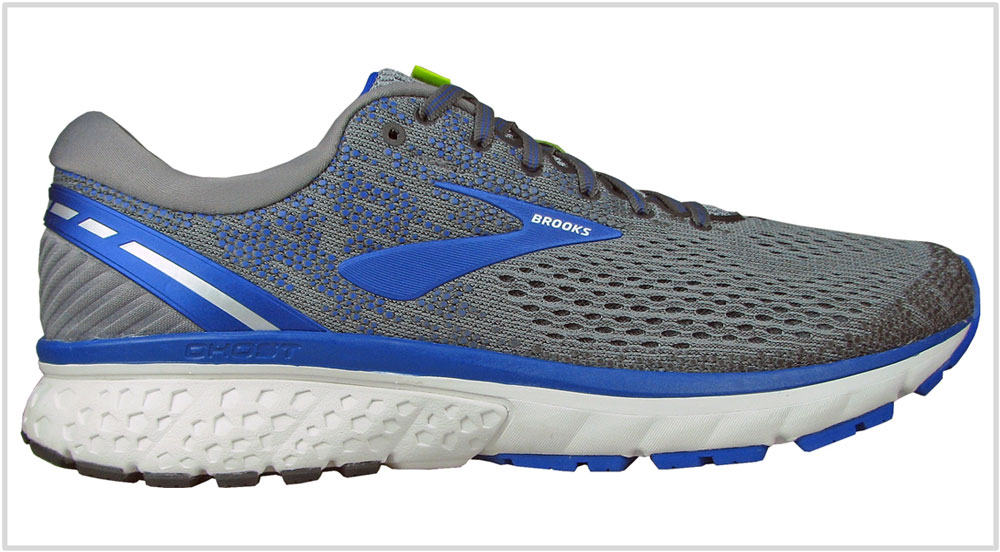 The Glycerin’s specs look better on paper, but we’ve always preferred the Ghost over the Glycerin. That opinion doesn’t change for 2019.

The Ghost 11 packs greater versatility at a lower cost. It’s lighter and better ventilated. And surprise, surprise, the ride is softer than the Glycerin.

We don’t have the numbers, but it’s likely that the Ghost outsells the Glycerin by 3:1. And the Ghost is deserving of that, for it is a neutral trainer which offers a lot to like.

Brooks says that ‘if Goldilocks ran, this would be her shoe’. Solereview agrees. 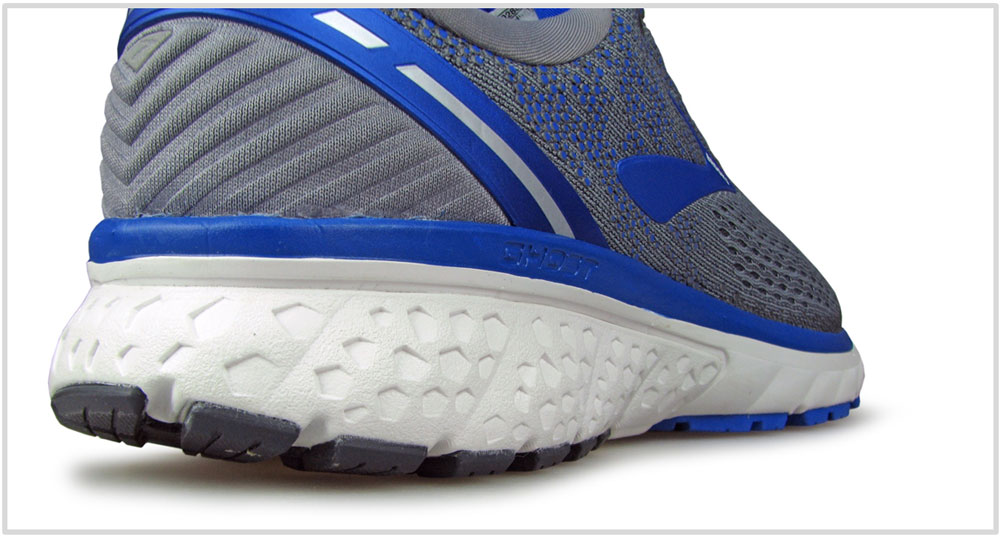 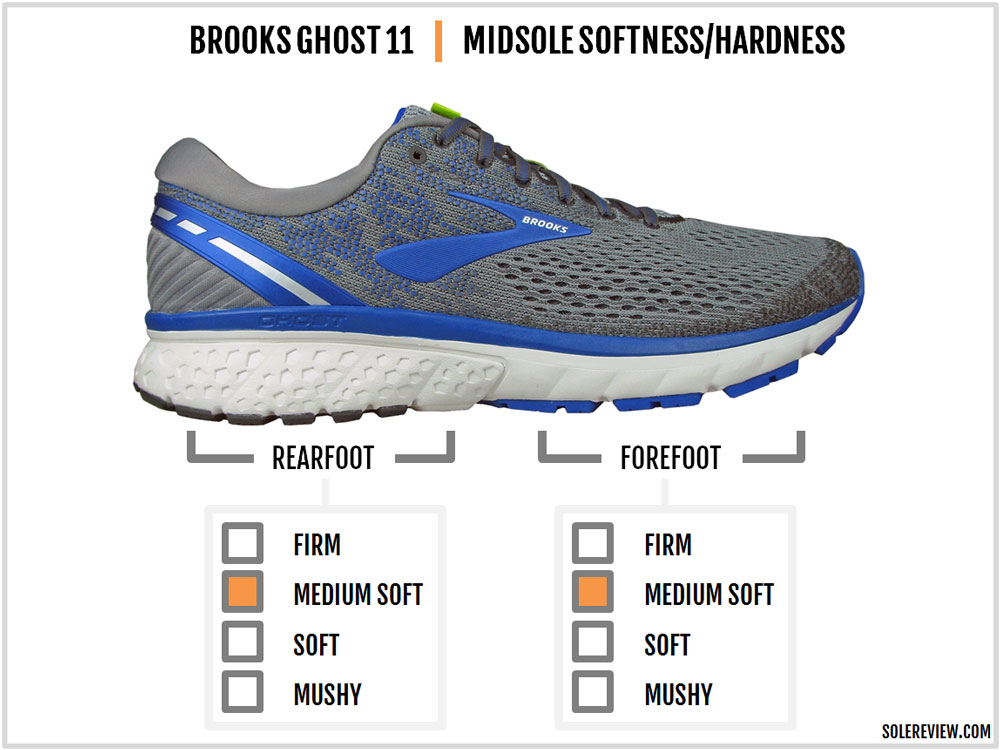 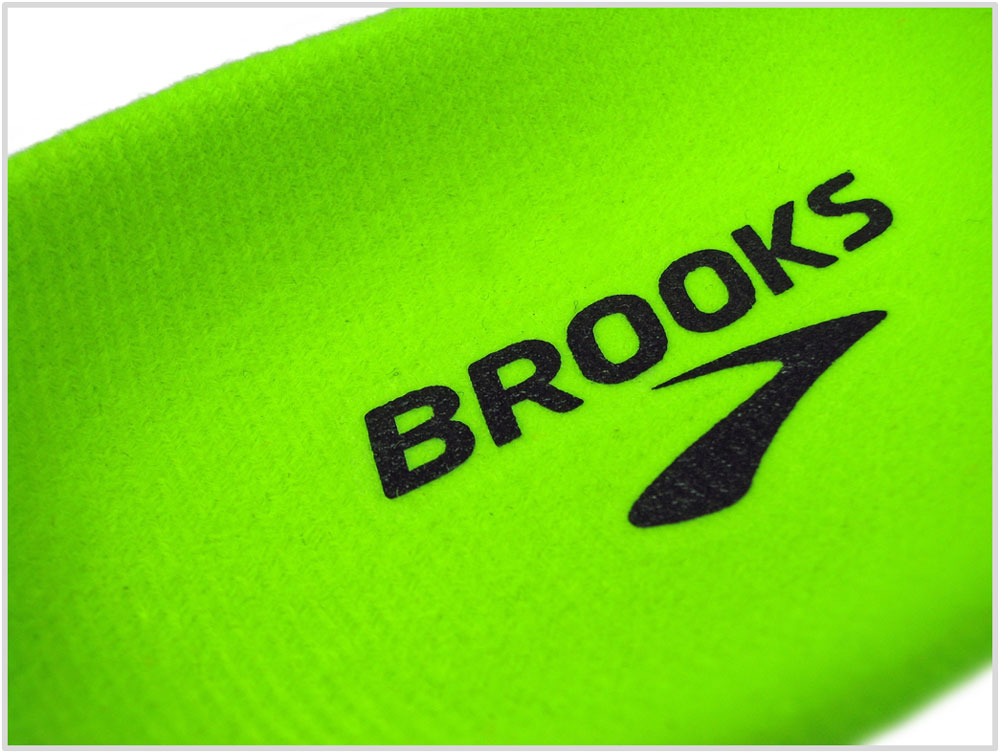 We have no idea why Brooks keeps (and very persistently so) advertising the DNA Loft as ‘super-soft.’ It is not. They probably have a completely different benchmark for softness. One which excludes the adidas Boost, Reebok Floatride, and Nike ZoomX foam.

Not that the presence of the Loft matters a lot on the Ghost 11. Brooks’s new flagship foam compound sees limited use here; unlike the Glycerin, there’s only a heel crash pad made of the DNA Loft.

In fact, the BioMoGo midsole is softer than DNA Loft wedge. This softer feel is particularly noticeable during forefoot striking. The forefoot gets the combined stack of the BioMoGo foam, the insole and lasting over a blown rubber outsole.

The Ghost has always had a multi-density midsole design, with the general set-up consisting of a separate crash pad connected to the rest of the outsole. Among all the versions reviewed, only the Ghost 9 was an exception to this rule.

The tried-and-tested form factor is also applied to the Ghost 11, and the results are predictable. What happens under the rear-foot is slightly more complex than the forefoot. 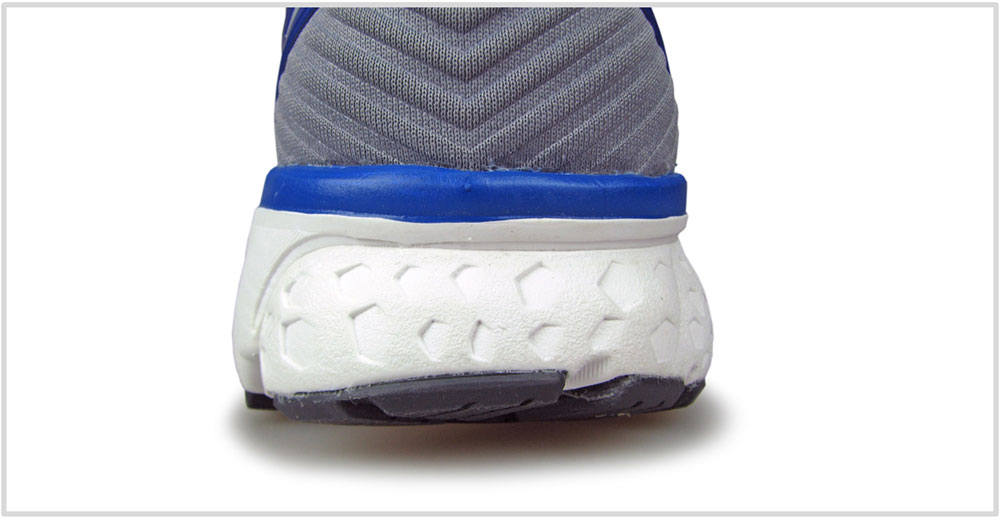 With a firmer DNA Loft crash pad plugged into the rear, there’s a slight compression bias towards the lateral side. This behavior is the result of an intentional design which makes the medial side more supportive.

While the DNA Loft wedge is firm, the outsole slab attached to it has multiple grooves. There’s another groove which carves out the DNA Loft crash pad. Both these factors aid compression on the outer side. 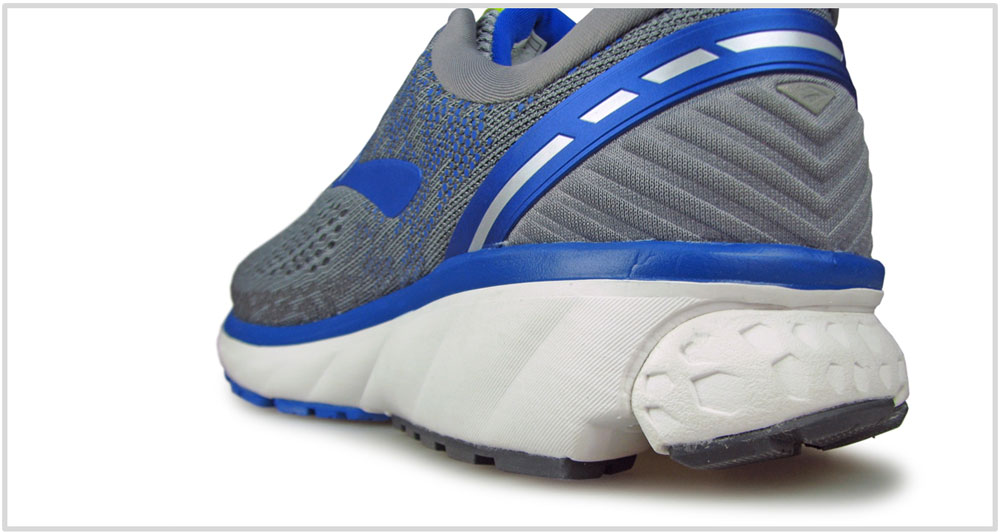 At the same time, the bias is within safe limits. Thankfully, the DNA Loft’s firm density works in the Ghost 11’s favor. If Loft was as soft as Brooks claimed, the ride would have ended up dangerously lopsided. With the current set-up, the rear-foot is supportive while being cushioned.

There are a couple of other things going on under the rear-foot. The wide transition groove allows the crash pad to operate with relative autonomy.

The groove spreads out into a wide cavity under the heel which splays on impact – thus helping cushioning and keeping the shoe centered. The split crash pad and the rounded heel design eases transitions during rear-foot striking.

Thus, heel landings are managed well by the rearfoot’s suite of functional parts. The rest of the midsole performs optimally during the loading cycle. The midfoot is bridged by rubber and foam lugs, and the blown rubber section takes it through the push-off phase. The outsole rubber grips well.

The Ghost 11 isn’t an agile shoe; this is a daily neutral trainer with a leisurely feel. That said, the Ghost 11 feels sportier than the Glycerin. And it all comes down to the weight.

Due to the limited use of DNA Loft and a sleeve-free upper, the Ghost is 10% lighter. The 300+ gram Ghost isn’t lightweight by the fast-evolving industry standards, but it isn’t soul-crushing heavy either. The weight isn’t out of line with the product profile – for the time being, that is. 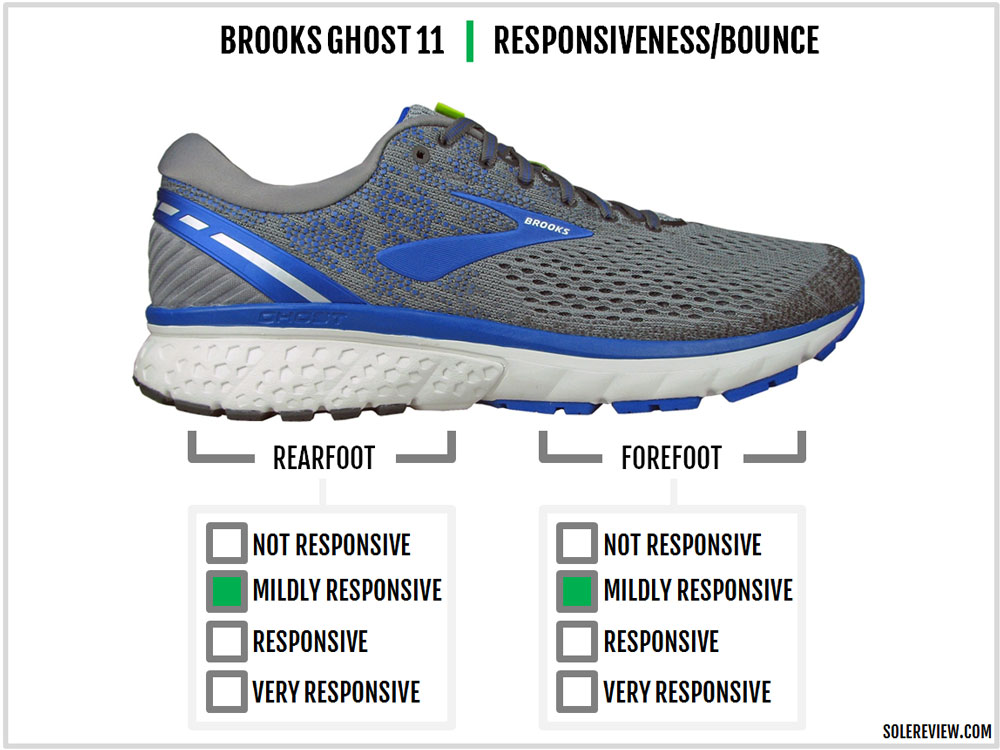 The Ghost’s forefoot is also bouncier than the Glycerin. The BioMoGo foam delivers better feedback and responsiveness along with softer forefoot cushioning. There are plenty of outsole grooves which keeps the shoe moderately flexible.

And that is why we prefaced this review with a recommendation. If a comfortable daily trainer with a neutral and padded ride is all that you need, the Ghost 11 is an excellent choice.

The Ghost 11 is ideal for daily training runs, marathon distances or even runs on flat woodland trails. The upper’s also a pretty comfortable place to be in, an area which we’ll cover next. 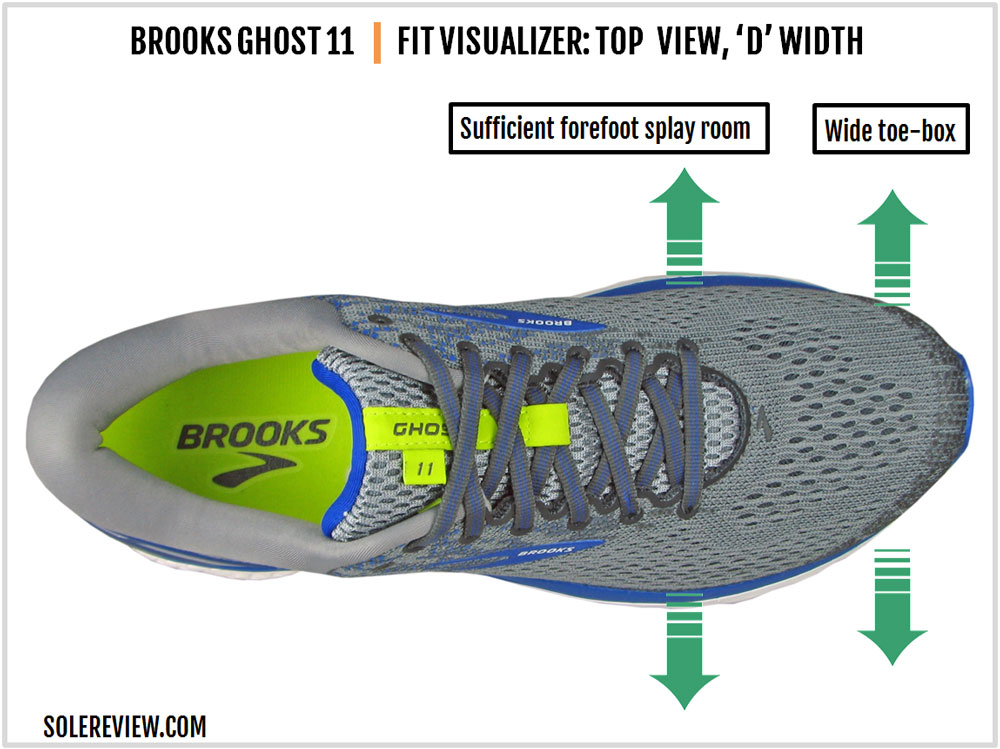 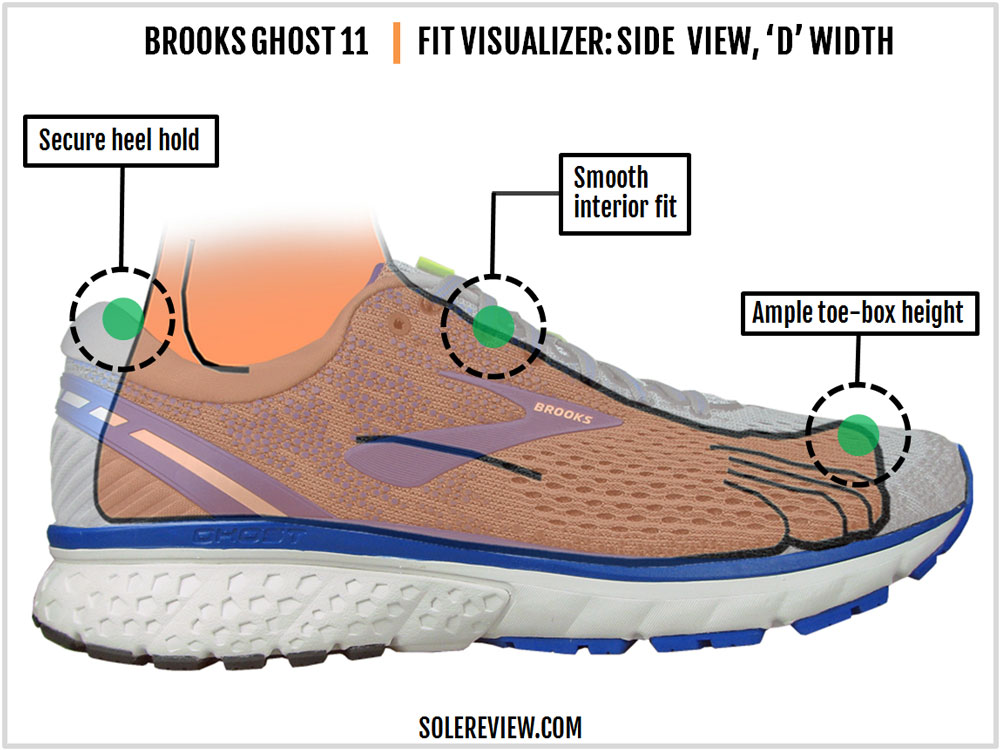 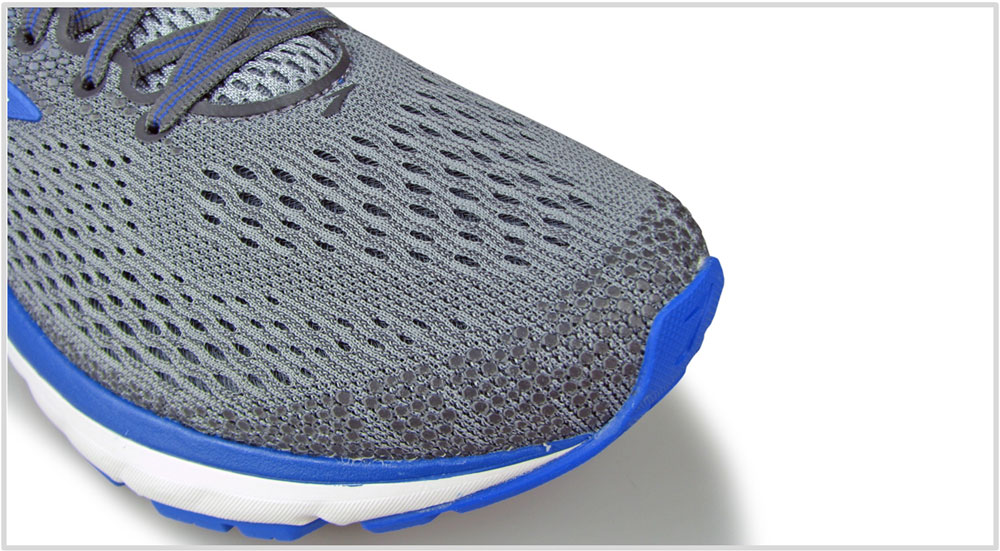 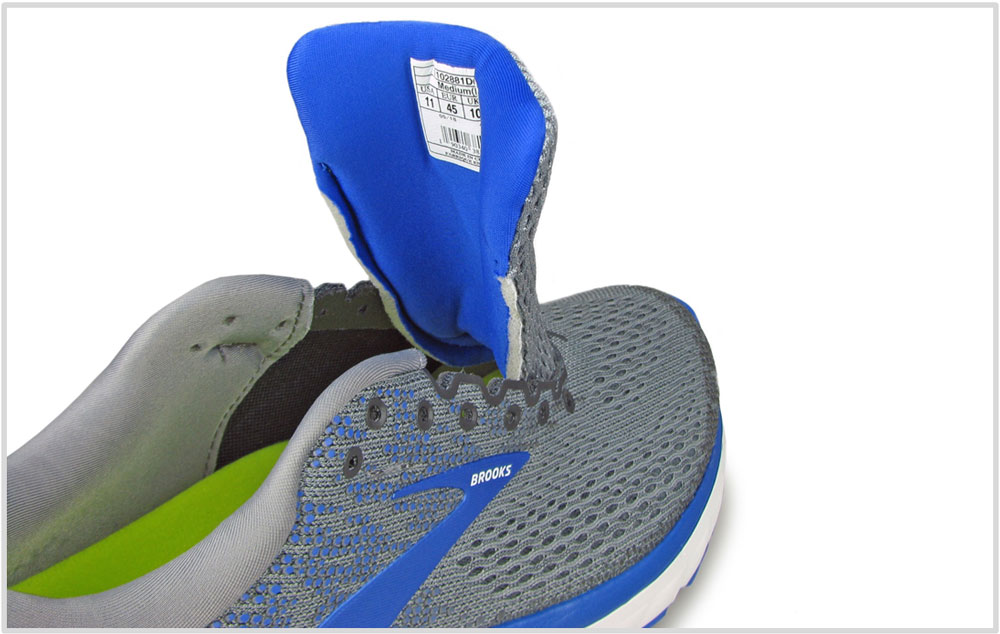 The Ghost 11 is spacious. That’s made possible by the absence of an inner sleeve and a last shape which allocates room where required. The toe-box has enough ceiling, the sizing fits true, and the foot splays comfortably.

The engineered mesh upper breathes very well. With nothing between the outer mesh and the foot, air circulation isn’t obstructed. 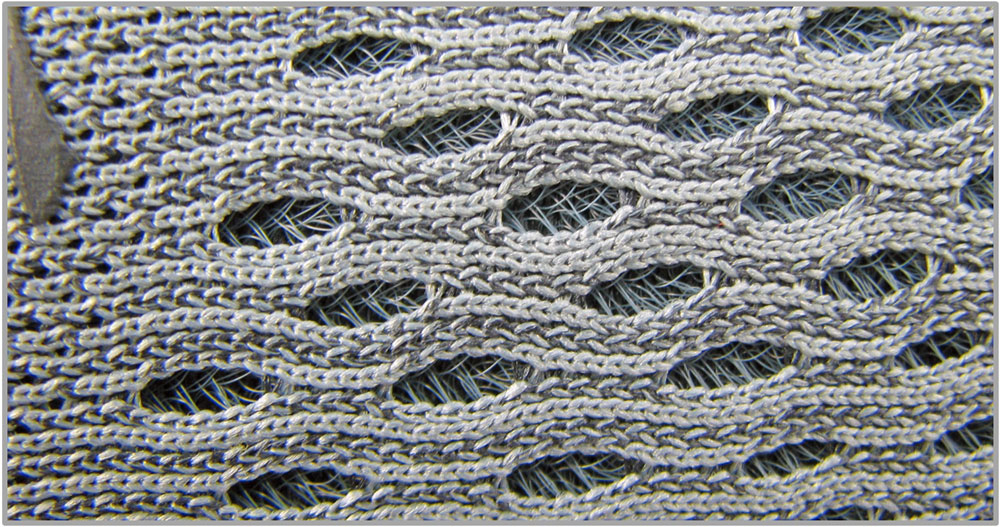 The mesh used on the Ghost has a spacer structure; this produces a slight cushioning effect over the foot. Not many brands use this dual-structure material, particularly when the mesh in question is an engineered kind.

Over the years, the Ghost has been introducing aesthetic minimalism into its upper design. The Ghost 11 is a far cry from the complex uppers of older gen models. As recently as last year, the Ghost 10 featured a stitched on toe-box and heel overlay. Well, that’s gone now.

And this change isn’t a bad thing, not at all. Historically, Brooks hasn’t done a great job at maintaining the fit and finish of overlay-rich models.

The chances of assembly going wrong in minimal upper designs are far lower. There are glue marks around the Ghost 11’s heel, but at least it doesn’t affect the fit.

This isn’t to say the Ghost 11 is short on the details. High-density printing provides visual depth to what would have been a boring canvas of mesh. The molded Brooks logo acts both as an upper prop and visual enhancement. 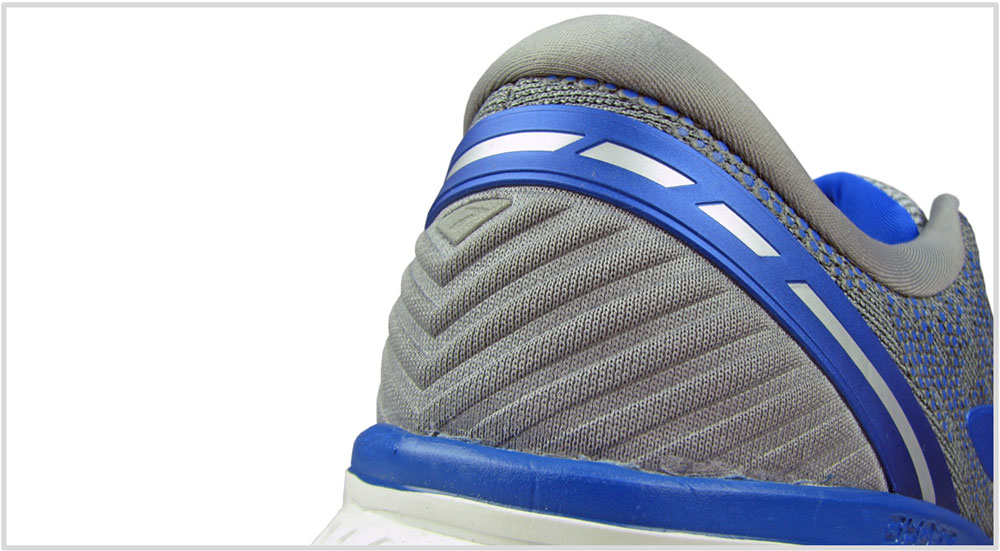 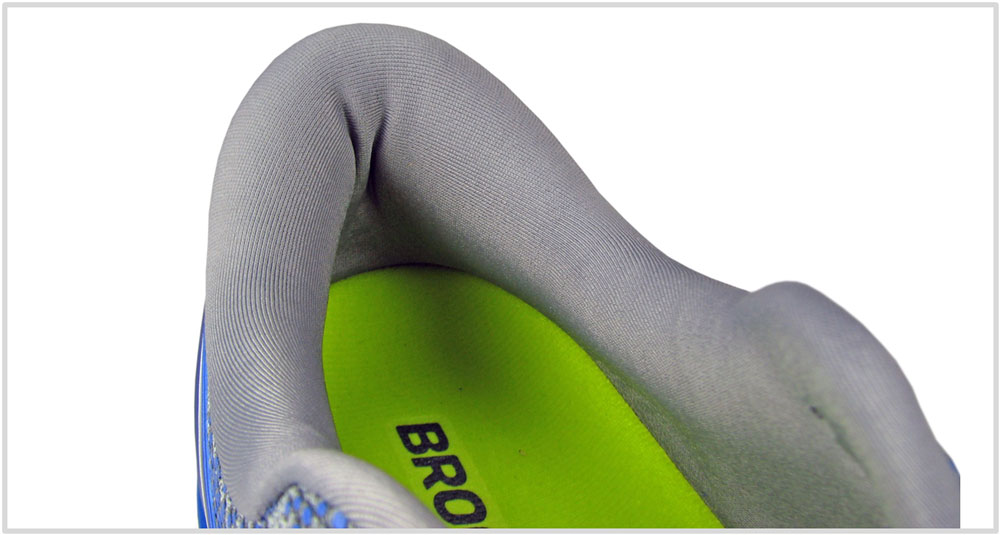 The outer heel is wrapped by a thick urethane band and molded mesh. There’s a tiny reflective bit in there too. Along with the internal heel counter, these seemingly cosmetic details help achieve a secure heel fit.

On the inside, the plush heel collar does a great job. There’s no heel slip and the padded lining is comfortable and gentle over the Achilles. 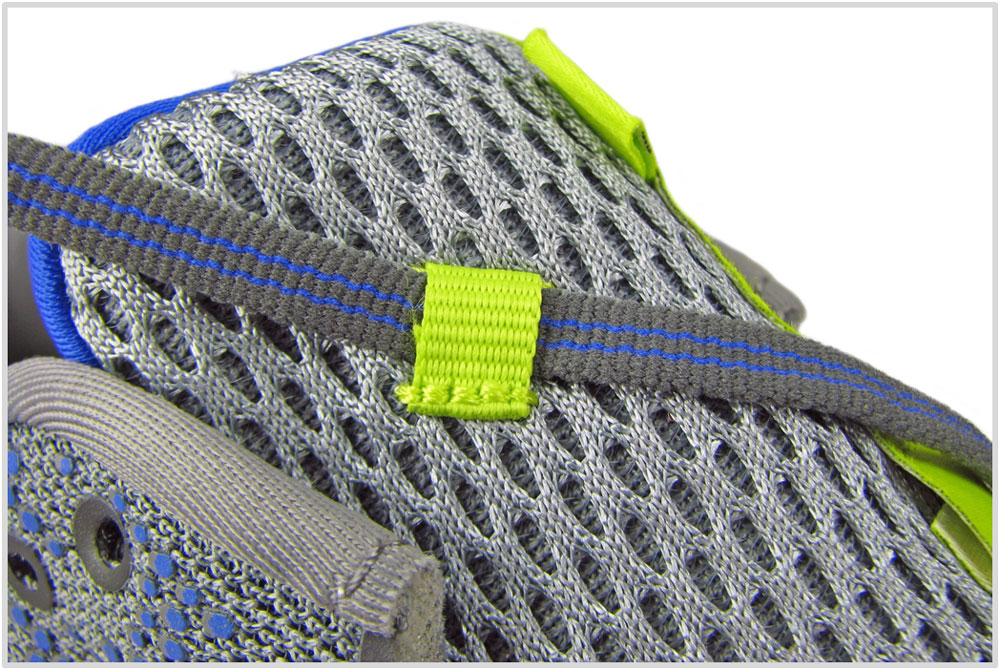 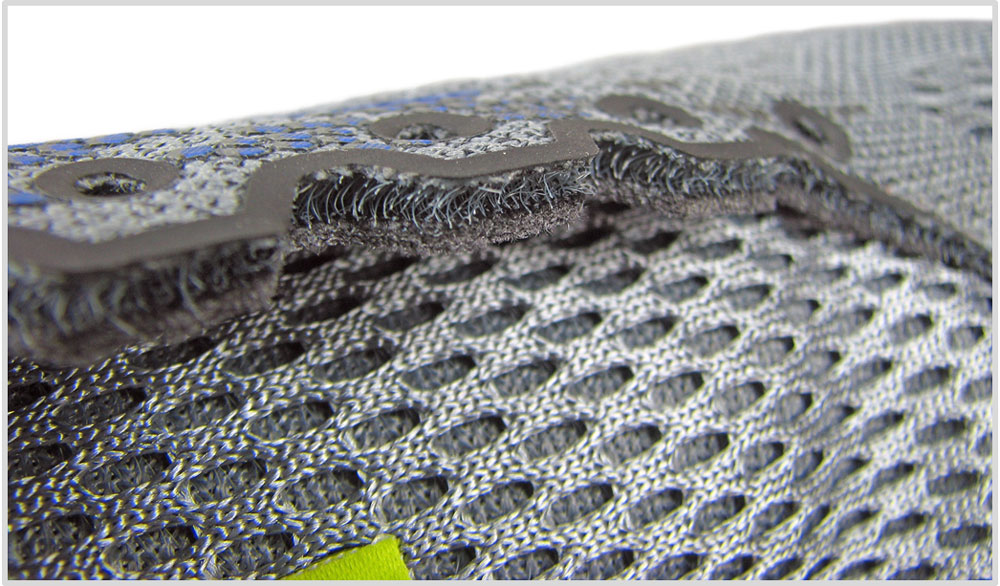 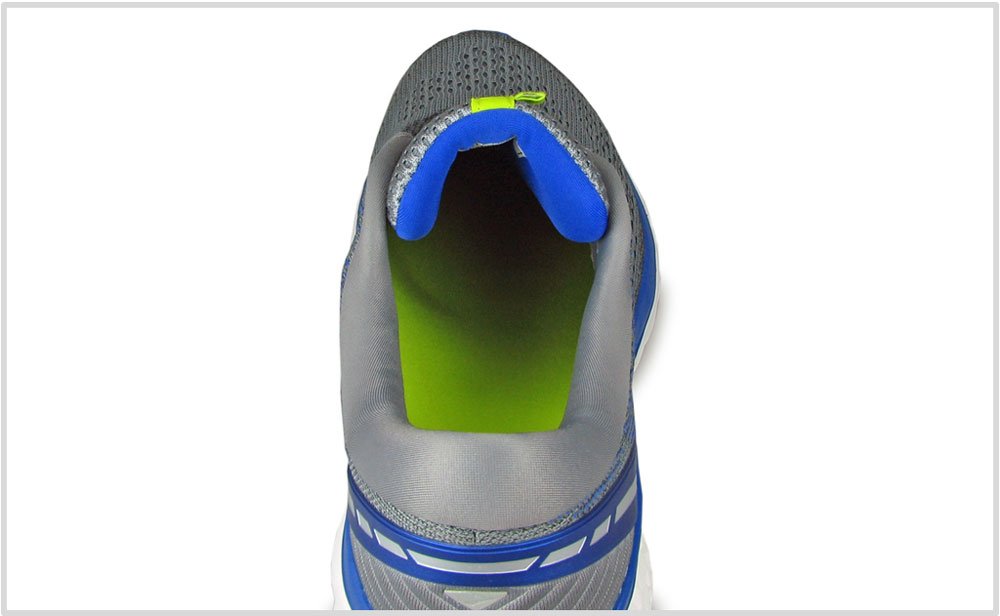 The sleeve-less tongue doesn’t slip. Brooks employs a nifty trick – a lace loop on the outer tongue – which keeps the tongue from sliding. The tongue has just the right amount of foam needed to filter the top-down lacing pressure.

The lacing eyestay design also helps. It is reinforced underneath; and on top, there’s the spacer mesh with its fibrous structure. This composite helps cushion the lacing cinch. It helps that the Ghost 11’s laces are flat, thin, and stretchy.

No hot spots manifest themselves during runs. The smooth, spacious, and ventilated upper makes the Ghost ideal for comfortable long-distance runs.

There are four widths in the Men’s Ghost, ranging from a B (narrow) and all the way to an extra wide (4E). For damp weather conditions, Brooks sells a waterproof Gore-Tex version available for $30 more. 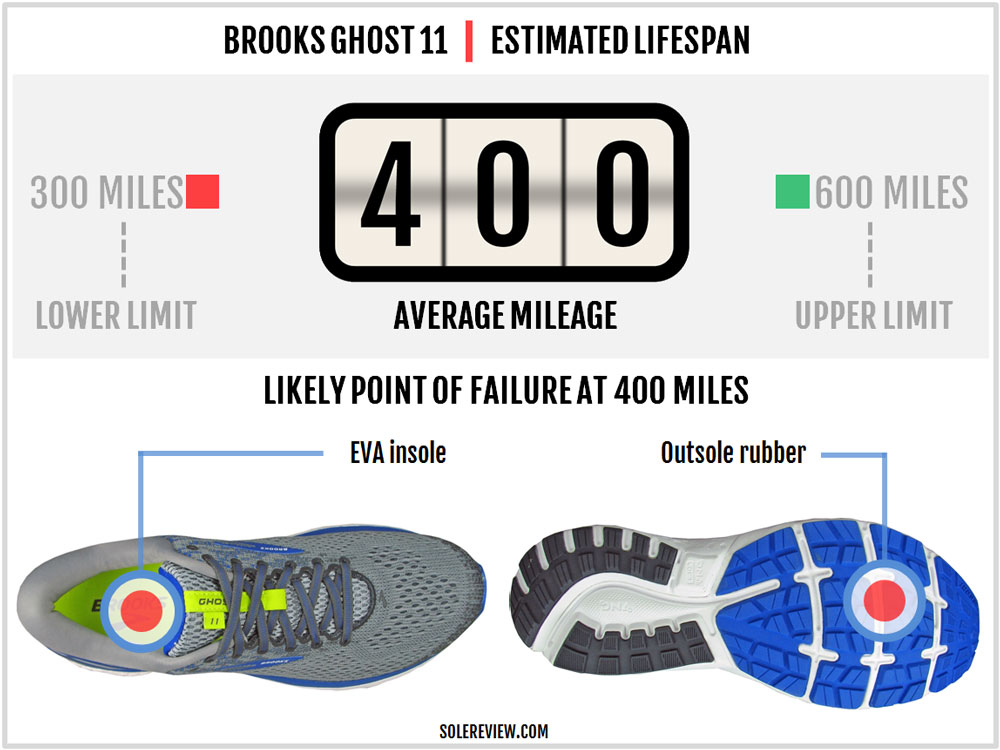 The Ghost 11 is well put together so extracting 400 miles out of the shoe is doable. The midsole foam retains its cushioning well; the rubber outsole blends superior grip with acceptable durability levels.

The pace of the outsole wear and tear will taper once past the initial ownership stage. Most insoles bed in after a couple of hundred miles, and it’s no different for the Ghost 11. 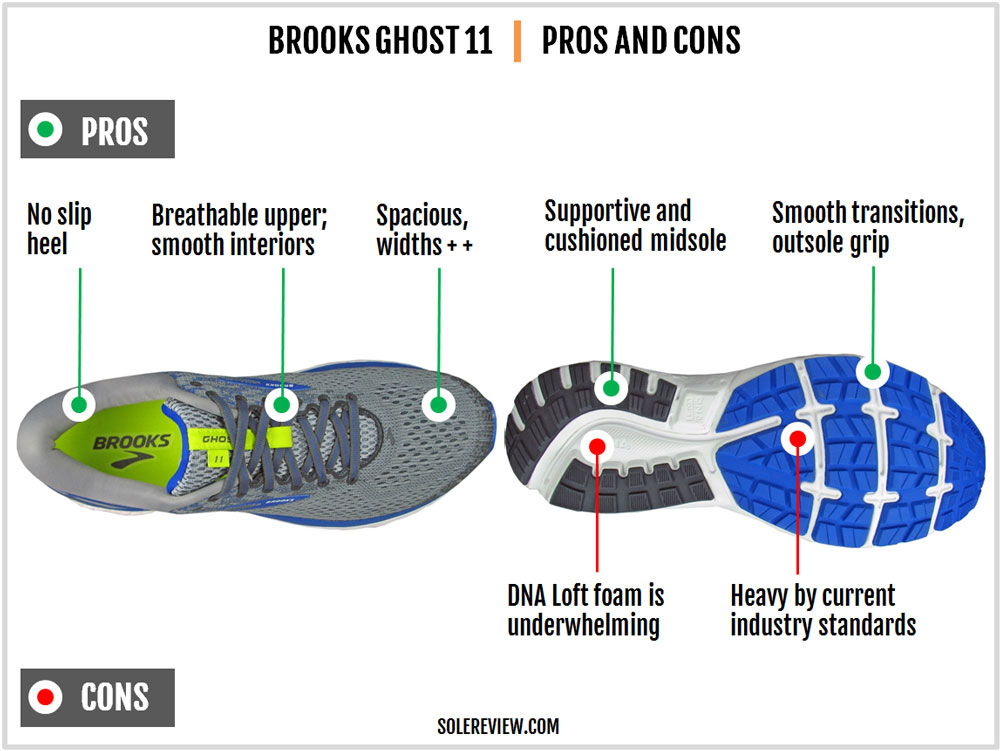 The Ghost 11 is a crowd pleaser. There’s nothing which spectacularly stands out, and the ride isn’t engaging either – and that’s the entire point.

Everything comes together to create a trainer which gets the job done for most runners – as long as the runs involved are of an easy-going nature. The midsole feels neutral and supportive enough and delivers enough cushioning to make long runs comfortable.

The space inside the upper feels just right, and Brooks hasn’t cut corners on the materials.

If we had to give Brooks tough love, then we’d point out that DNA Loft material is heavy and isn’t fun to run in. Also, it might not be a bad idea to put the 11-ounce Ghost through a weight reduction program. 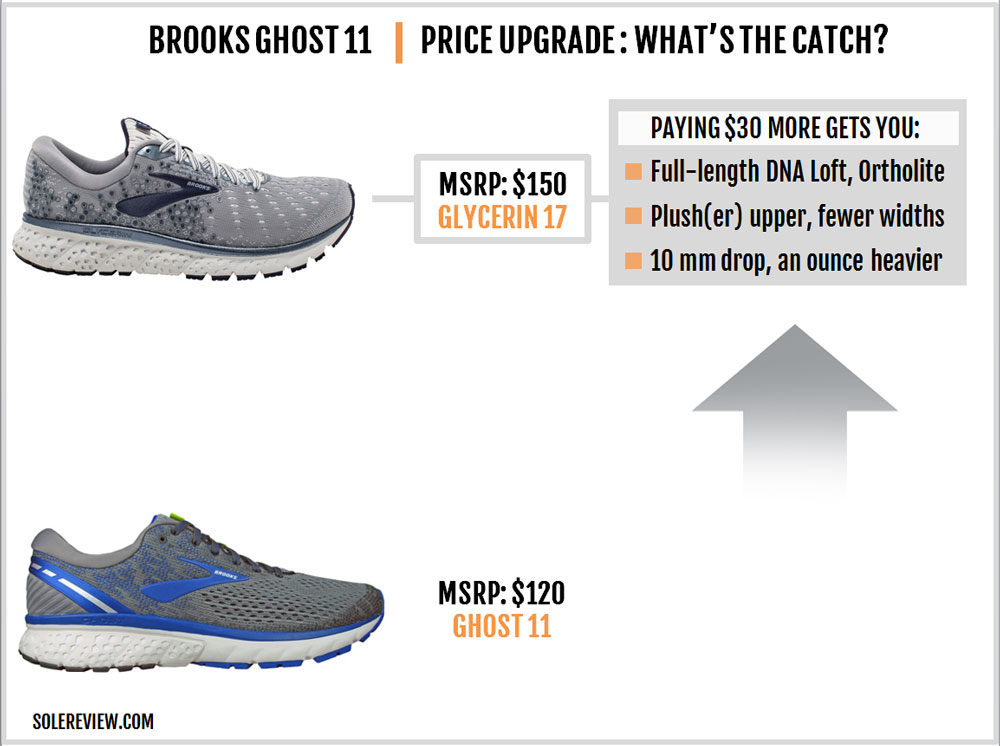 You have to weigh the benefits derived from the Glycerin 17’s plusher upper and more supportive ride against the drawbacks. The Ghost 11 doesn’t have the bells and whistles of the Glycerin and yet it feels relatively nimble. There’s more room inside the Ghost too. 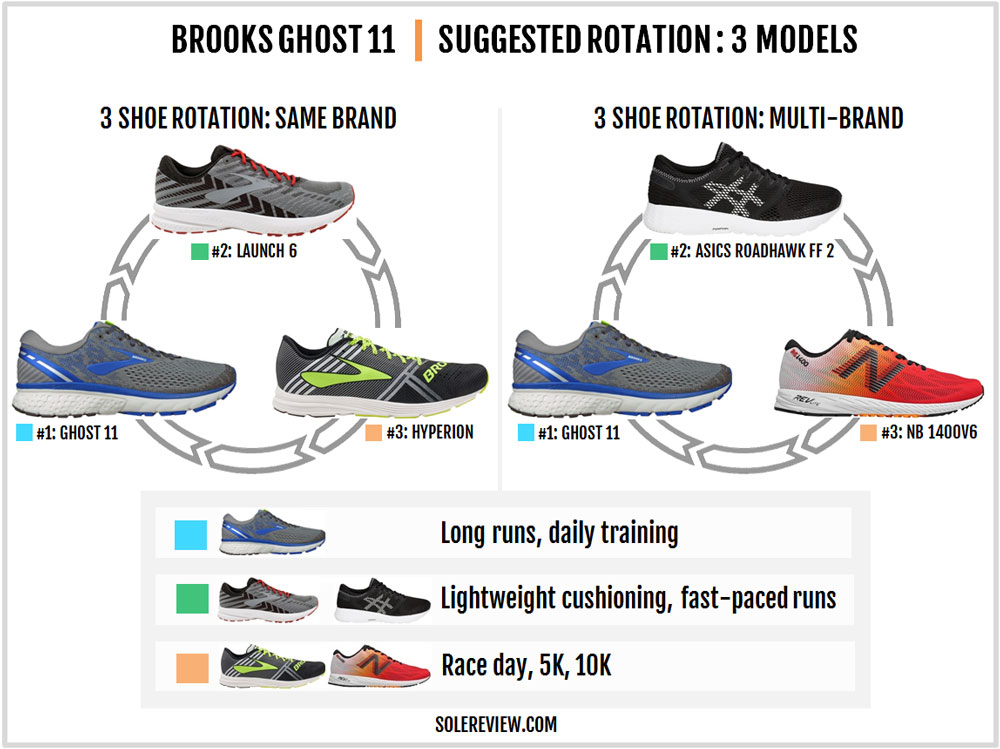 The Ghost is versatile enough for most runs – until you begin to push it, that is. When that time comes, the Launch 6 and the Hyperion come in handy. Use the 2-ounce lighter Launch 6 for faster training runs. When things get serious, slip on the Hyperion for those 5K and 10K bursts.

Also optional are the excellent New Balance 1400V6 for race days and the Asics Roadhawk FF 2 for faster-paced workouts. 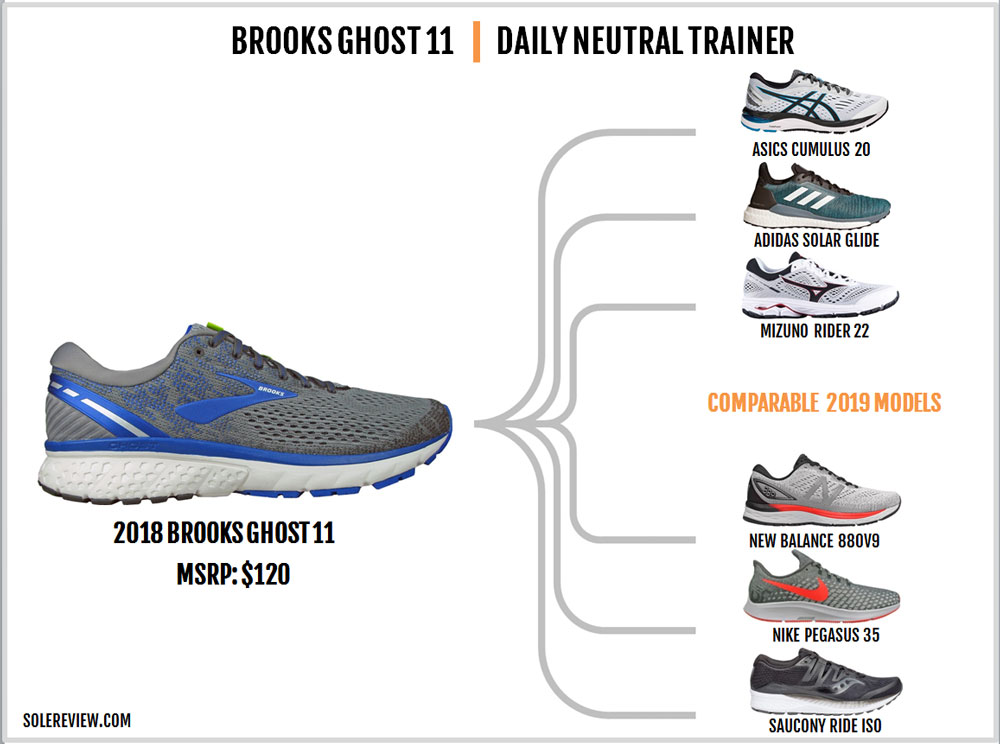 The term ‘neutral cushioning’ was coined to mark running shoes which weren’t medially-posted.

In 2019, using ‘neutral’ to describe a diverse assortment of running shoes seems downright silly. More so, when the shoes in question have little in common with one another.

Take this chart for example. Based on paper specs, the Brooks Ghost 11 is a neutral shoe. But only one other shoe here – the New Balance 880 V9 – which compares at a fundamental design level.

The 880 V9 is based on a template which is similar to the Ghost. Just like the latter, the 880’s dual-density midsole combines supportive cushioning with a hard + blown rubber outsole combo. The upper fits with room to spare. The weights are nearly identical. The end use-case is the same as the Brooks shoe – the 880 is a daily trainer for easier paced runs.

On the softest side of the spectrum is the Boost foam equipped adidas Solar Glide. The Cumulus 20 does its Asics Gel thing, while the Nike Pegasus 35 is a good all-rounder with a firmer ride than the Ghost.

The Saucony Ride ISO combines upper plushness with a full-length Everun midsole. Lastly, if you’re craving for a Mizuno, then the Wave Rider 22 is the gateway into the Japanese brand’s neutral cushioning category.