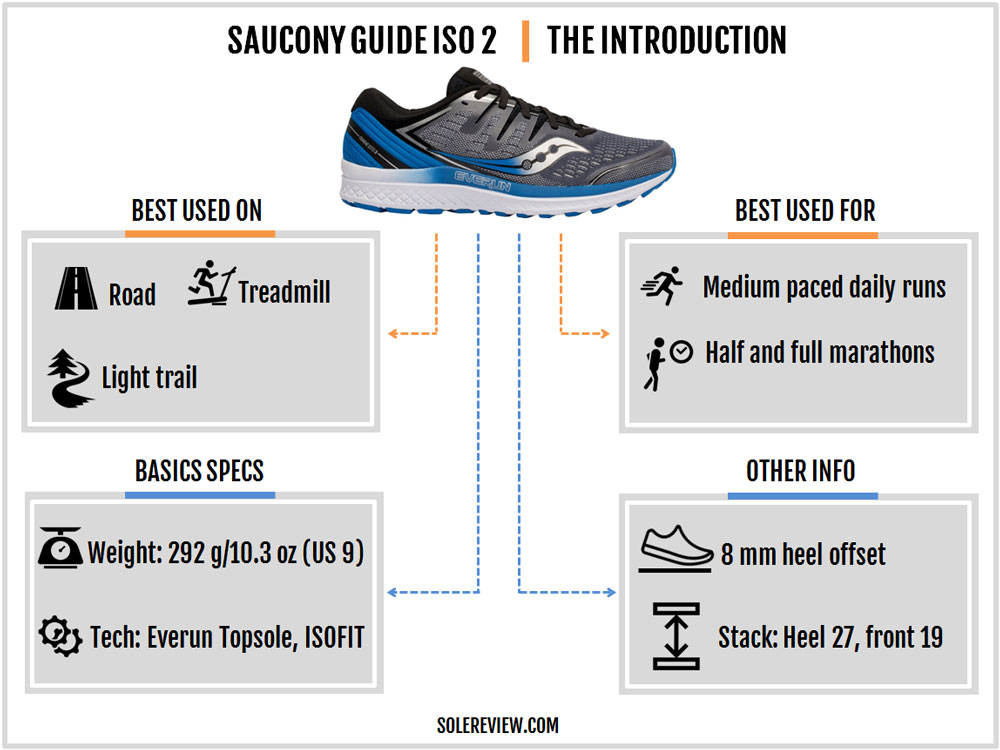 There’s a good reason why the Saucony Guide has been one of our favorite mild-support running shoes. Of all the versions we’ve reviewed, not even once has the Guide felt like a traditional, clunky stability shoe.

The Guide has always exercised the stability concept in moderation. The cushioning is firm and yet versatile enough for runs of various paces and distances. The snug upper is comfortable and happens to be one where even the otherwise flawed ISOFIT functions better.

Consistency plays a huge role in making the Guide what it is. Saucony hasn’t changed the basic formula over the years except for adding or removing minor design features. Even the weight is proof of that – historically, most Guide editions have weighed around 10 ounces.

The Saucony Guide ISO 2 follows a similar update pattern. There are small changes visible throughout the shoe, but none which upsets the Guide’s core design. 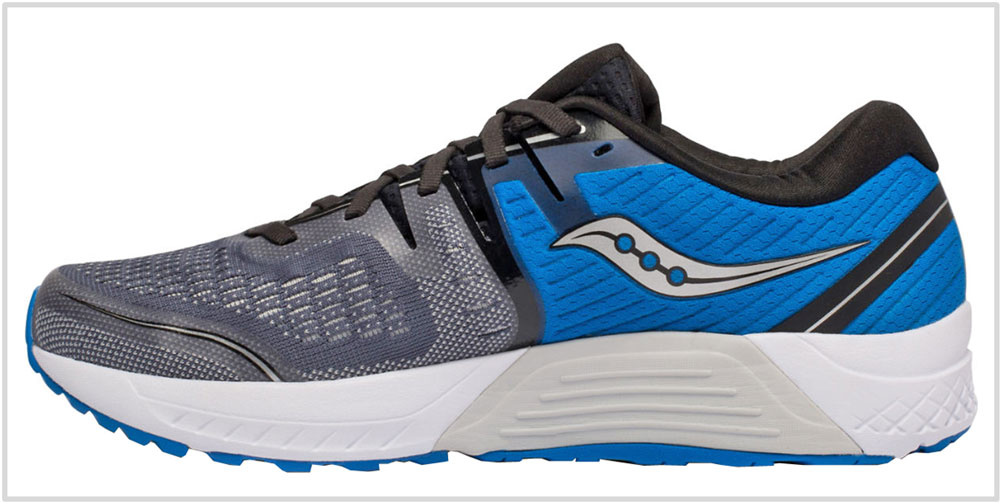 The Guide ISO 2 gets a new set of midsole and outsole. But like we said – the resulting changes in the ride quality are of a lower magnitude than one would expect of an updated model.

The configuration feels very familiar; the top layer has the removable insole with an Everun topsole underneath. These two components add softness to what is an otherwise firm PWRfoam midsole made of an EVA derivative.

Under the midsole is a dual-density rubber outsole. The Guide ISO 2 relies on the conventional layout which utilizes blown rubber under the forefoot and a harder compound in the rear. There’s no semi-transparent rubber like the Liberty or the Triumph. 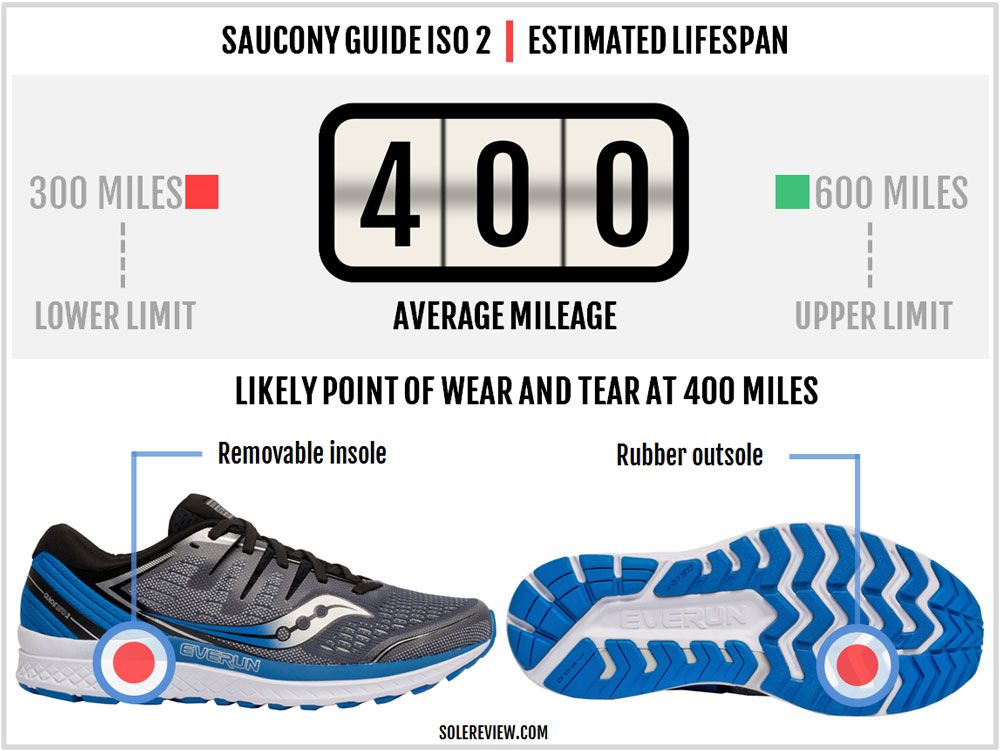 You won’t get the durability of the translucent rubber. But in exchange, there’s adequate grip on most surfaces, even in the wet. Fair trade, we say.

The outsole has been rearranged ever so slightly. The forefoot loses the lengthwise flex grooves of the Guide ISO 1. In its place are deeper side-to-side grooves which assist with forward transitions and flexibility.

There’s a generous amount of articulation – or the spacing between the lugs – on the Guide’s outsole. This construction helps transitions, as the rubber lugs work together with the midsole instead of against it.

The softer compound under the forefoot makes the landings and transitions padded while promoting smooth take-offs. The heel crash pad works with a high degree of autonomy due to the groove separating it from the rest of the outsole.

At the same time, the Guide’s heel doesn’t have a lot of bevel. If you’re a rearfoot striker, the chances are you won’t hit the inside edge of the heel as you would in shoes with a rounded heel (like the Nike Pegasus, for example). 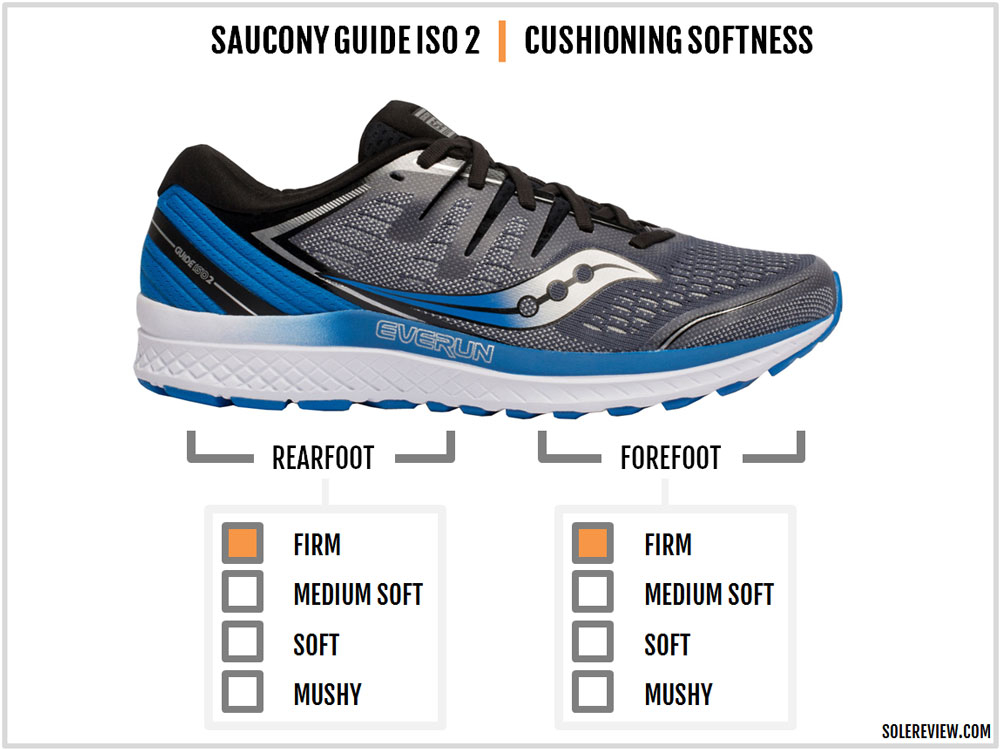 Even without considering the medial post, the Guide ISO 2 is a very supportive shoe. The firmness of PWRfoam adds inherent stability and the cupped design of the sidewall also helps. The deep transition channel under the rearfoot helps maintain the center of gravity.

Firmness usually equates to fastness, and this is one of those cases where that generalization applies. The Guide ISO 2 weighs 10.3 ounces but doesn’t feel like a slouch during faster runs and is equally at home at easier speeds.

The snug upper also plays a role in making the Guide versatile. Like we’ve said many times before, any running shoe is a sum of parts. 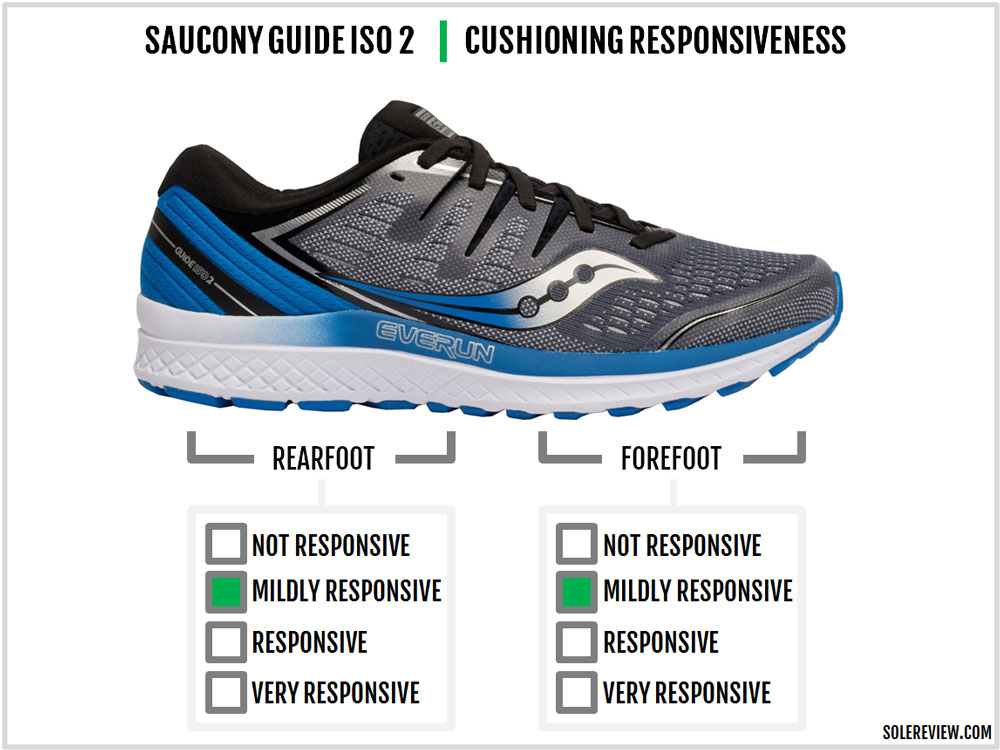 The Everun Topsole and the insole combine to keep the ride comfortable during long runs. The medial posting is small, non-interfering, and doesn’t curve up under the arch.

However, we like what Saucony has done with the Hurricane ISO’s medial post. There’s a sliver of Everun foam just above the firmer wedge. This prevents the foot from directly loading on the hard section; even the New Balance 860V9 has a similar design. Something like this on the Guide would be nice.

The firmness of the Guide’s midsole means that the Everun layer delivers a higher degree of responsiveness as compared to softer Saucony models such as the Hurricane ISO.

The Guide ISO 2 is a good do-it-all stability shoe. The midsole, while firm, provides sufficient impact protection when used as a daily trainer for most runs. 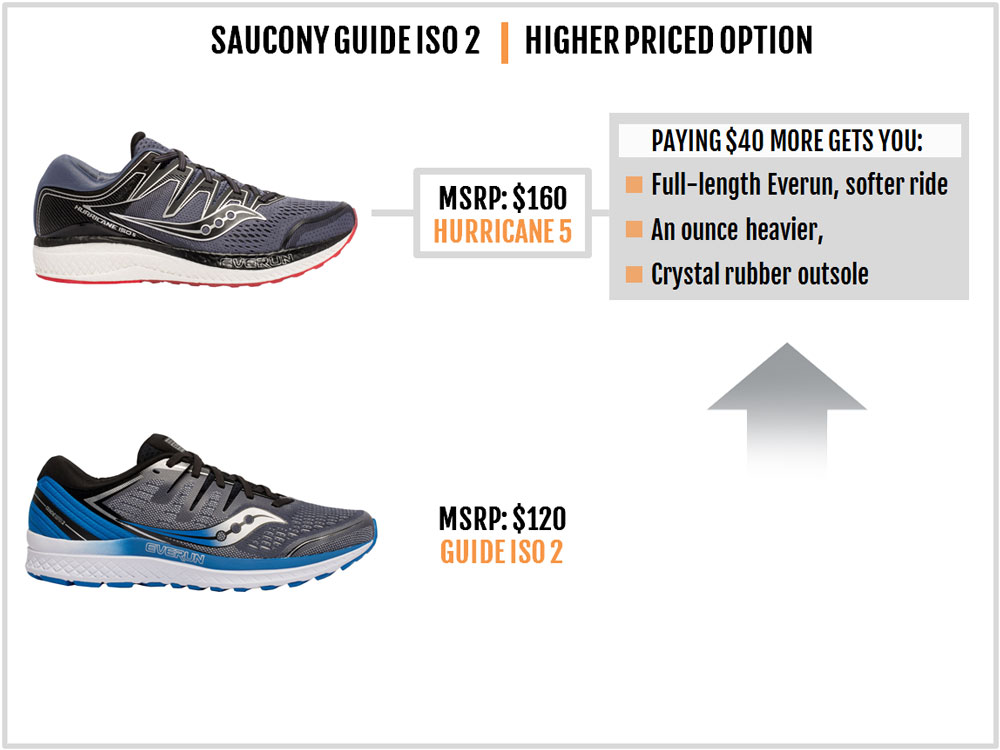 The Hurricane ISO 5 is a safer choice in case you seek a higher level of ride comfort. The full-length Everun midsole makes the ride softer than the Guide ISO. The high volume Everun comes at a weight trade-off; the Hurricane is an ounce heavier than the Guide.

Regardless of the Hurricane’s higher price, the Guide ISO’s firmer midsole ends up making it more stable than the Hurricane. The Guide also works better for faster paces, so just know that more expensive doesn’t necessarily mean universally better. 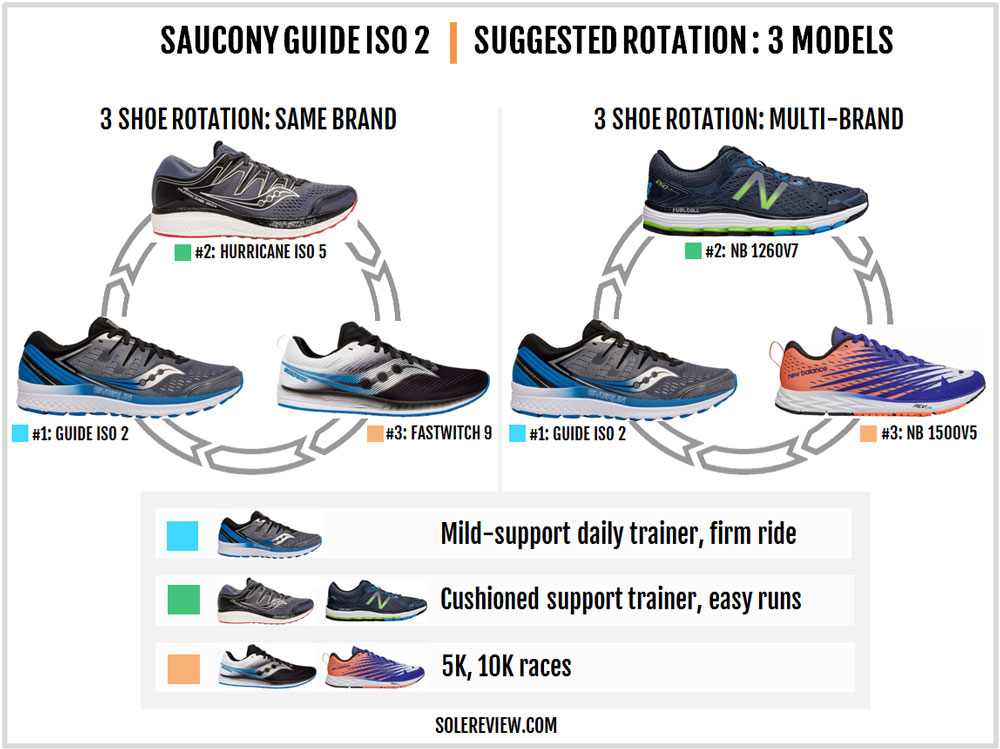 So which shoe does one get for more stability than the Guide ISO 2? The Saucony Omni ISO is the answer. That being said, the Omni and Guide do not have a wide functional separation so there isn’t a lot of rotational value.

A three shoe rotation is better served by the Hurricane ISO 5 and the Saucony Fastwitch 9. The New Balance 1500V5 rivals the Fastwitch as a road racer so any of the two options will work.

The New Balance 1260V7 serves the same purpose as the Saucony Hurricane but has a larger medial post which is felt underfoot. 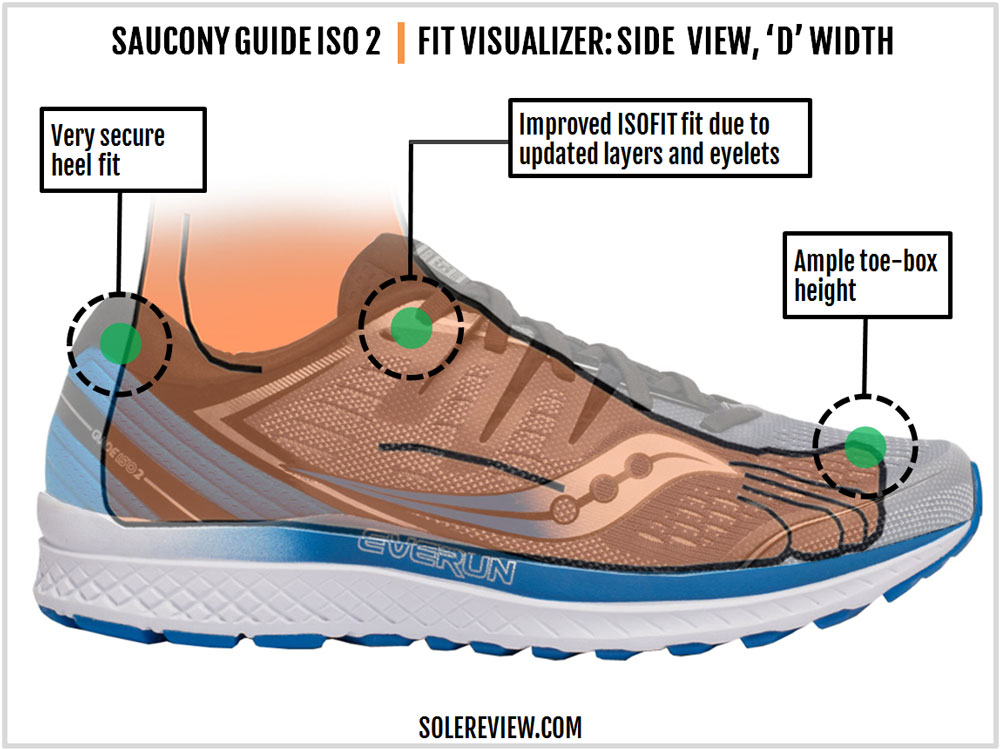 Saucony has historically made snug-fitting Guides, and the ISO 2 is no different. There isn’t a lot of room on the sides but at the same time, the ISO 2’s toe-box gains vertical space.

Unlike the Guide ISO 1 which used a lot of synthetic (Flexfilm) around the toe-box area, the ISO 2 opts for a cleaner front. The forefoot also gets a new engineered mesh without the synthetic overlay over the big toe. This clean-up makes the toe-box less constrained than the V1. 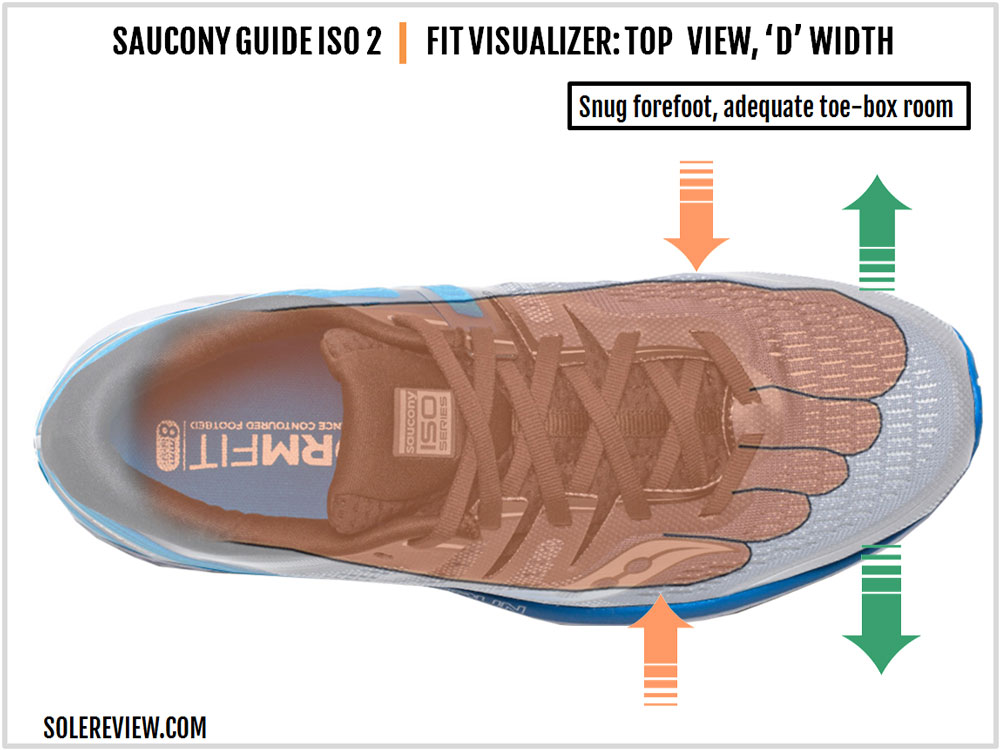 For whatever it’s worth, reducing the Flexfilm frees up a bit of forefoot room. The difference between the ISO 1 and 2 isn’t a lot, but you do sense the reduced tightness where the upper and midsole edges meet. The Guide ISO 2 also sells in a wide (2E) if you don’t fit into the standard D sizing. As far as the stick length goes, the sizing fits true.

The ISO 2 gets a new heel lining which is smoother than the previous model. The fit hasn’t changed though – the internal counter is (still) molded narrow and the collar is packed with foam. The heel has a very secure grip.

The outer heel has a reflective trim for low-light conditions.

Much like the Triumph ISO 5, the Guide’s ISOFIT is an improved version. Instead of the lacing loops used on the ISO 1, the redesigned straps have eyelets punched into them. This reduces the layered feel of the previous ISOFIT panel and helps it lie flush with the sleeved tongue.

The thin flat laces do not occupy a lot of real estate and work well with the tweaked ISOFIT. The transparent Flexfilm is bonded to the edges of the ISOFIT straps for structural strength; they also make the upper appear slimmer. The Saucony midfoot logo is larger than before and prevents the upper from drooping.

It’s interesting to note that the ISOFIT on the Guide (and the Ride) functions better than more expensive models like the Hurricane ISO.

The first two lacing rows are based on standard eyelets and do not have the straps. This keeps the upper materials from bunching when you tug on the ISOFIT straps. On the new Ride ISO 2, even the ISOFIT strap notches are shallower. We expect the upcoming Guide ISO 3 to adopt a similar revision.

If there’s a drawback of the ISOFIT, that would be the relative lack of ventilation.

The toe-box breathes well but the rest of the upper does not. The thick sleeve under the midfoot ISOFIT panels locks the heat in – this is relevant since we’re headed towards sweltering summers. 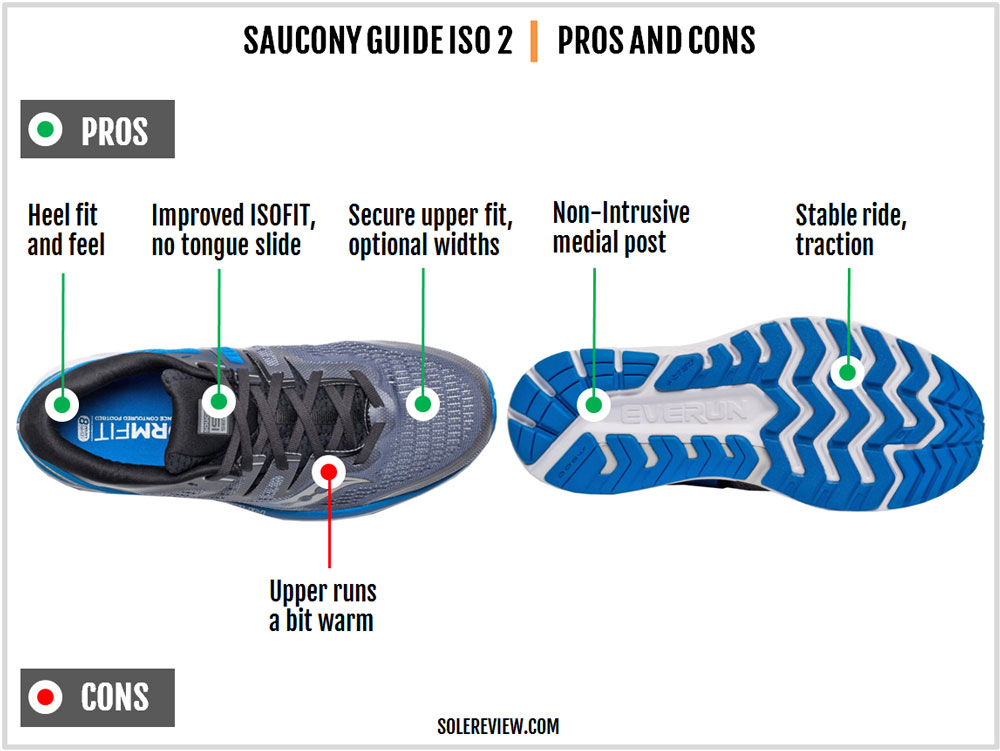 Except for the Guide’s tendency to run warm, there’s really nothing else to nitpick.

For a medially-posted running shoe, the 10-ounce Guide is very versatile. The layered midsole and outsole bring together cushioning, grip, and stability in a holistic manner. The firmer wedge isn’t a bother so the Guide will also suit runners who otherwise purchase neutral shoes.

The ISOFIT upper is an improvement. Replacing the lace loops with simple eyelets is a good design solution to make the upper look and feel streamlined. The foot stays locked down inside the snug fitting upper – which is a plus. 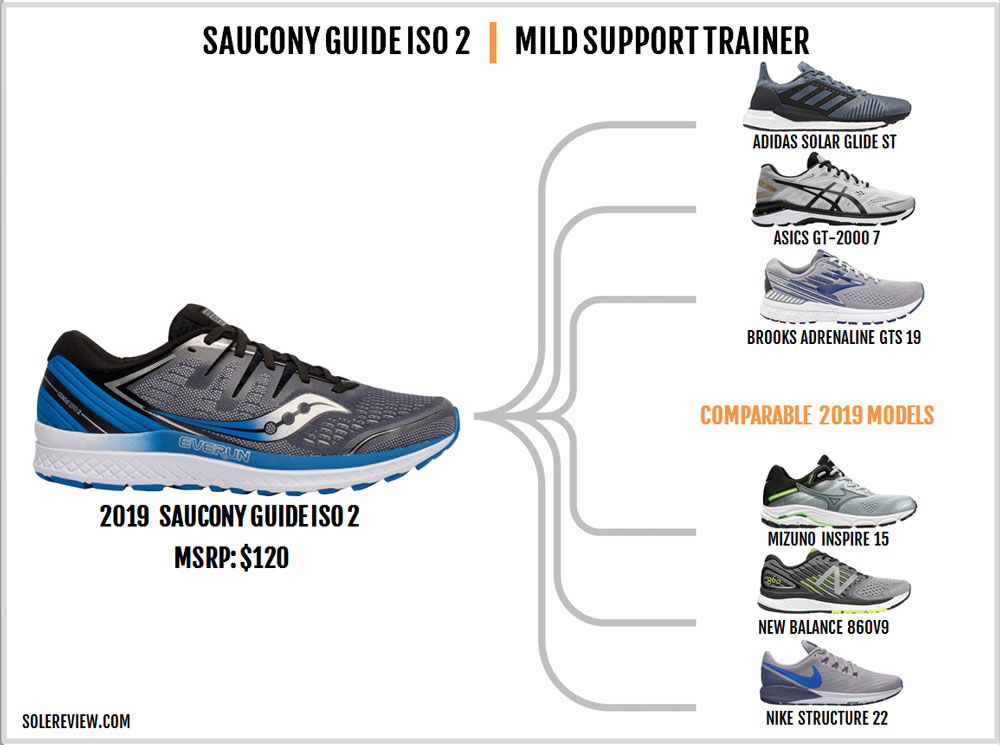 The Saucony Guide ISO 2 has several competitors in this mid-priced stability segment. The Asics GT-2000 7 is a familiar support-shoe staple, and so are the New Balance 860V9 and the Nike Structure 22. If ride firmness is what you’re after, the Structure 22 merits consideration.

The adidas Solar Glide ST is the softest shoe here. Its ‘stability’ classification is based on a set of elevated midsole rails cupping the upper. A full-length Boost midsole provides a softly cushioned ride experience.

Brooks leaves the medial-post behind in both of its stability models, namely the Adrenaline GTS 19 and the Ravenna 10. The GTS is now a supportive neutral with a softer ride than the Guide. The Ravenna’s cushioning comes with smaller GuideRails and a compartively modest upper design.

Very little has changed on the Mizuno Inspire 15, so you get the same Wave-plated support from its midsole. Lastly, there is a trail version of the Guide ISO which has a stickier forefoot outsole for greater grip.