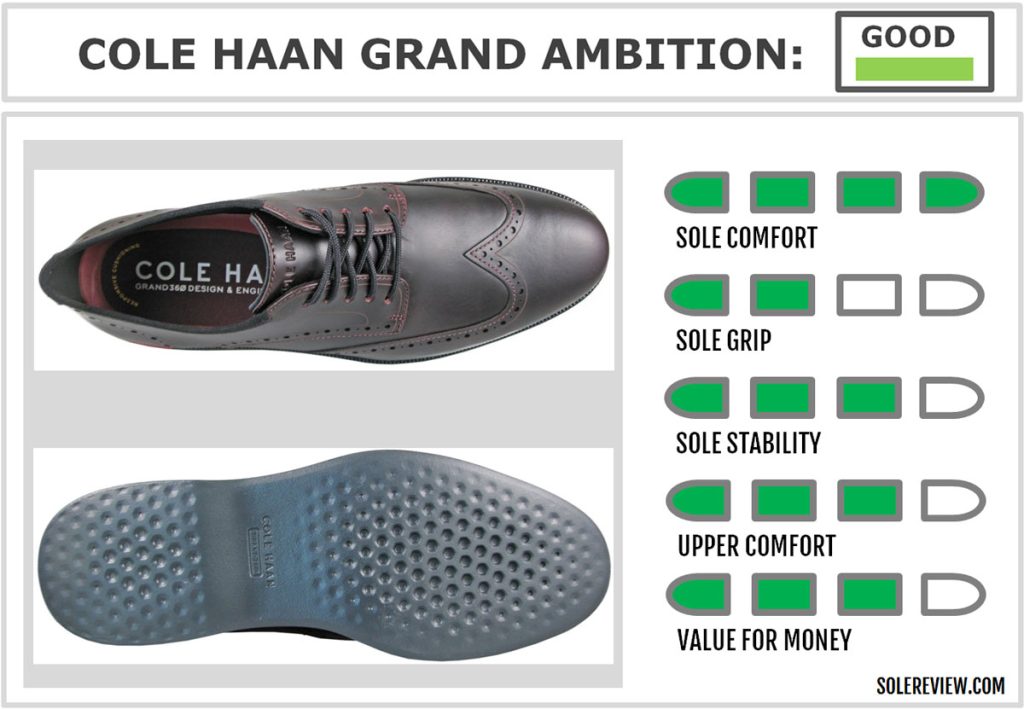 Airport-friendly: No, the upper has metal eyelets.

Waterproof: No. For use in dry weather only.

Cole Haan adds the Grand Ambition series to its catalog of dress sneakers. The GA Wingtip is a comfortable dress shoe hybrid with a cushy sole and spacious upper. We like it.
Ride comfort, lightweight, spacious upper with an optional wide, supportive insole, quality of finish
The outsole grip is average

The Cole Haan Grand Ambition Wingtip was purchased at full retail price for our review.

The Grand Ambition series is a fresh take on Cole Haan’s leather-casual form factor, and the Wingtip is one of the several variants.

Along with the Wingtip, Cole Haan also sells the plain toe (Postman), Chukka Boot, and Chelsea Boot versions on a shared midsole design.

The Originalgrand, Zerogrand, and Grandpro midsole platforms make up most of Cole Haan’s current assortment, and we think that the Grand Ambition midsole has the potential to become the fourth pillar of the brand’s catalog. 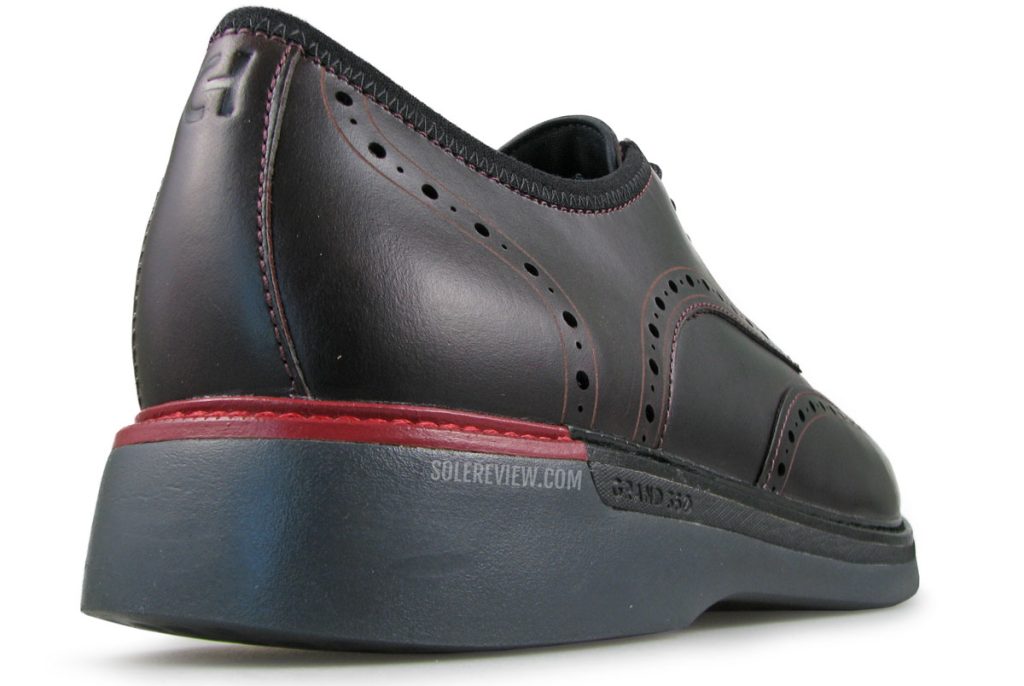 This new midsole is also one of Cole Haan’s softest. Unlike the Originalgrand or Zerogrand midsole that has a firm overtone, the Grand Ambition Wingtip’s ride has a distinct sense of underfoot cushioning, and that’s not just because of the insole. 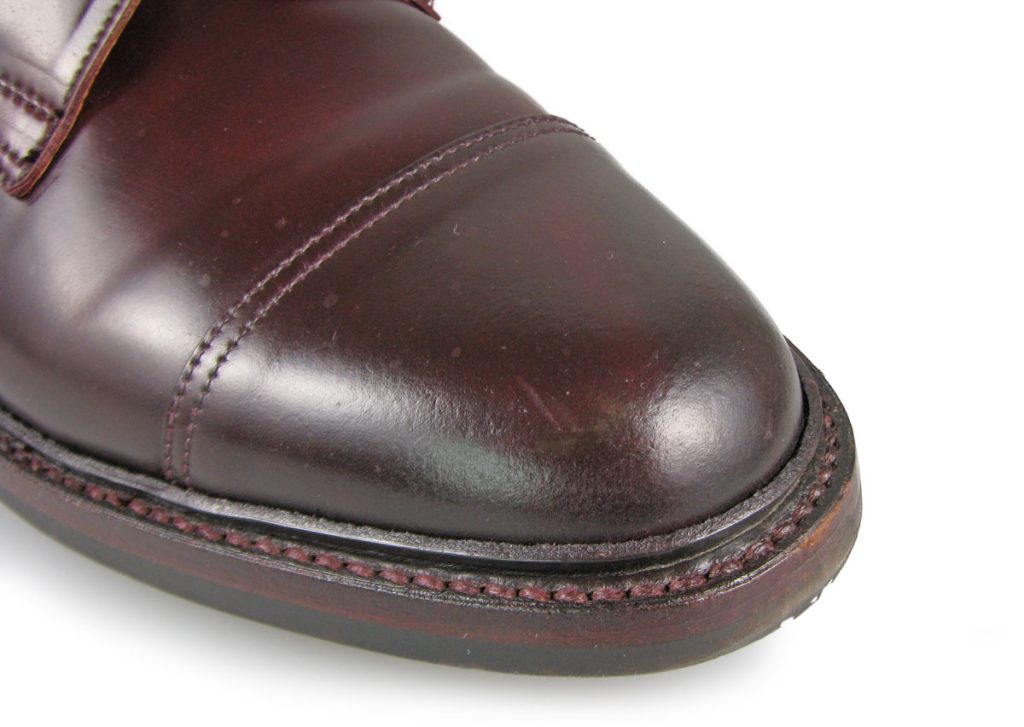 Picture here is a Cordovan leather boot made by Crocket and Jones. The Cole Haan’s ‘Pinot’ color seems to be inspired by the Horween’s 08 color.

It’s not every day that a Cole Haan shoe uses a burgundy leather upper, so we thought that this would be an interesting color to review. It’s also a nod to the Horween Shell Cordovan 08 color, so there’s that too.

THE SOLE DESIGN AND RIDE COMFORT

The outsole is all foam, no rubber.

The Grand Ambition’s midsole has a clean side profile with a smooth sidewall. Only the welt on top adds a dressy element.

And unlike many CH models, the welts used here appear somewhat functional. We say this because the welt cups the upper, and there’s a layer of soft foam underneath that seems to be attached to the welt. This is merely conjecture though. 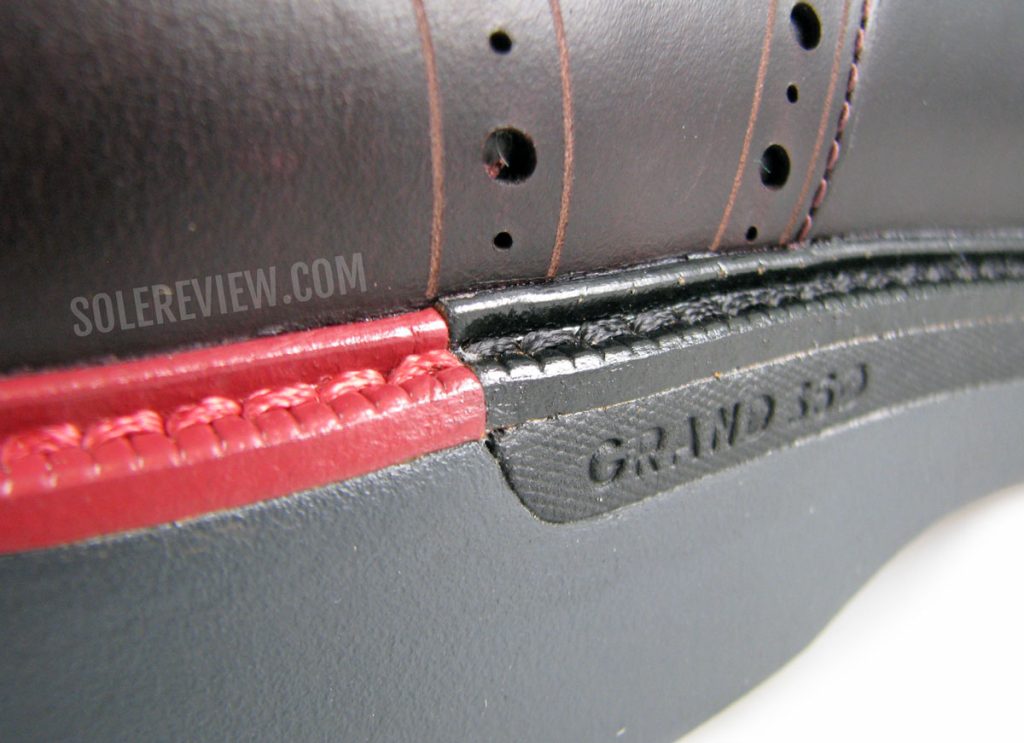 The welts look real enough from the outside. But are we sure? No.

Of course, these things cannot be ascertained without cutting the shoe open, but the welt doesn’t look decorative. However, if that’s the case, we don’t understand why the welts are glued tight to the upper.

Regardless of the welt’s functionality (or the lack thereof), they add a touch of elegance to the foam midsole. Other than the thin layer of soft foam under the welt, the midsole has a firm density.

The Grand Ambition Wingtip’s insole has a contoured profile for arch support. 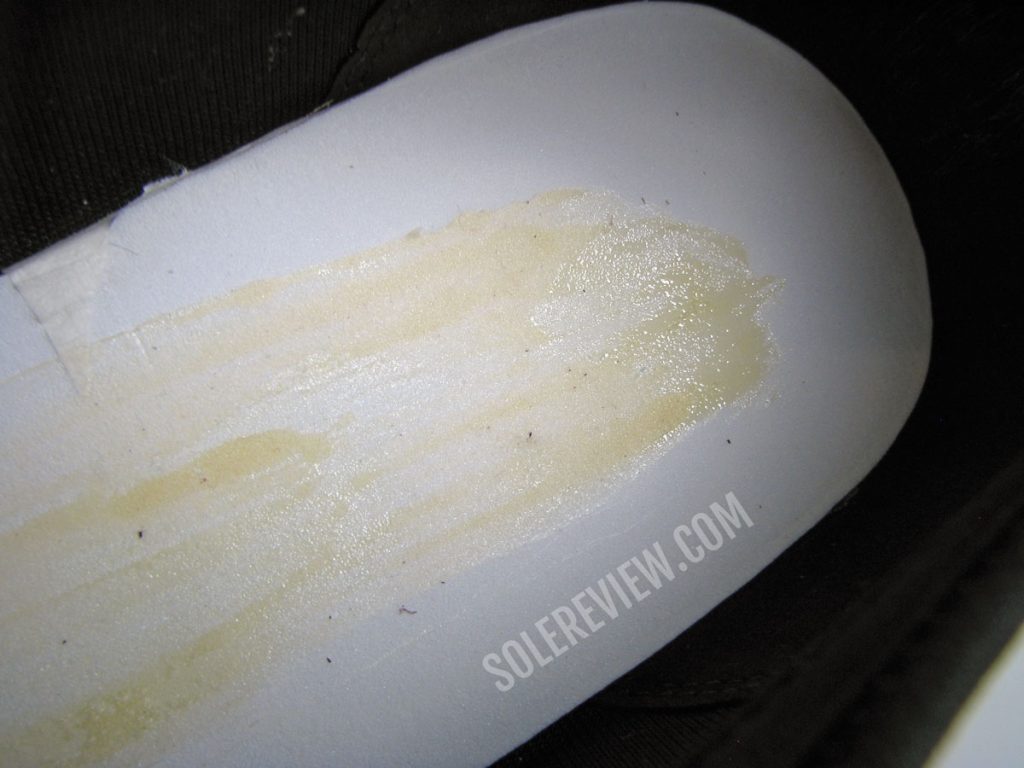 Going by the dab of glue, the insole of the Grand Ambition Wingtip is supposedly to be non-removable.

Inside the upper is a molded EVA foam insole that’s designed to be non-removable.

There’s some glue tacking the insole to the EVA foam lasting underneath, but it can be removed by carefully peeling it off. 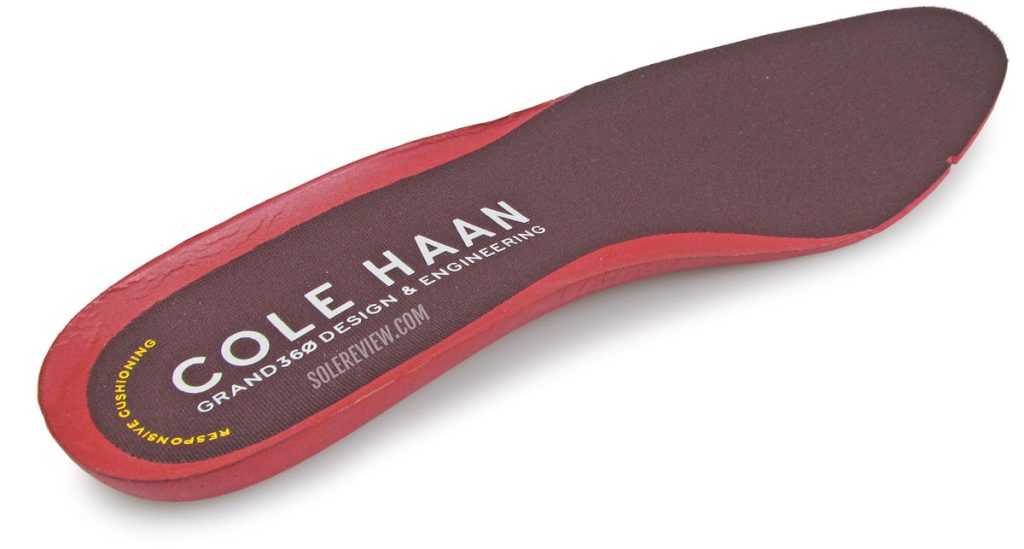 This two-layer insole comprises of a fabric footbed over an EVA foam base.

We removed the insole in our pair; it has a full-length EVA foam base with a textile cover. Like most performance insoles, the heel and midfoot sections are molded to create a contoured frame.

The arch area feels cushioned and supported as well. 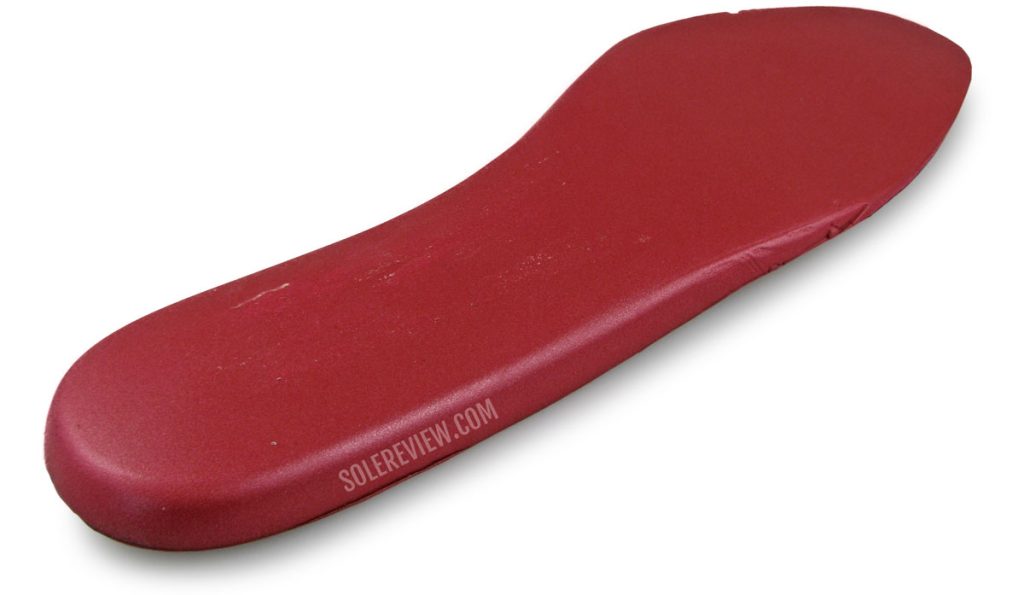 Unlike the Cole Haan Originalgrand and Zerogrand, the insole here is cushioned under the forefoot.

The EVA foam cushioning is also available under the forefoot. That’s usually the case for most insoles, but the last couple of Cole Haan shoes we reviewed only had partially padded insoles.

Based on the midsole foam density, we assumed that the Grand Ambition has a firm and flat ride. That’s not the case at all. There’s a distinct sense of softness that is absent in other Cole Haan models like the Originalgrand.

Sure. The foam insole and strobel provide step-in comfort, but the ride softness is experienced in the lower reaches of the midsole as well. 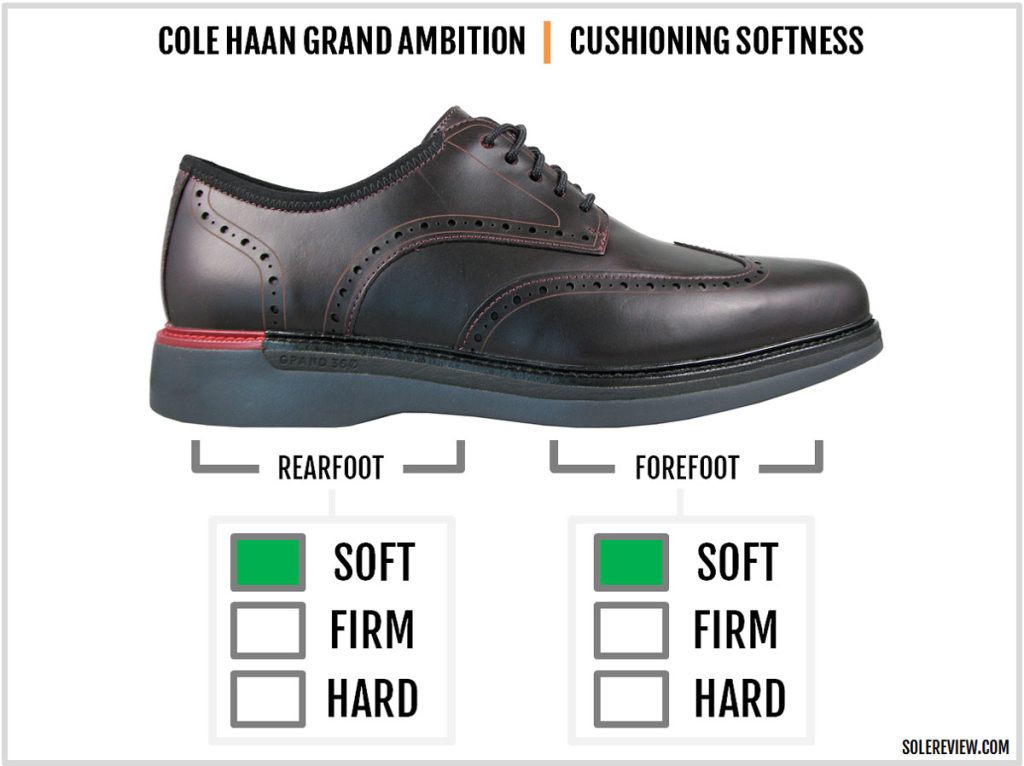 During walking, the heel cushioning is perceptible. It helps that the midsole has no outsole rubber at all. This allows the foam stack to compress without the firmer lugs getting in the way.

On the flip side, the traction isn’t as effective as a rubber outsole. There’s not much here in the way of lugs; the Grand Ambition relies on hexagonal-shaped foam cavities for grip. The foam outsole is ok for most everyday conditions, except for dusty, slushy, or freezing surfaces. 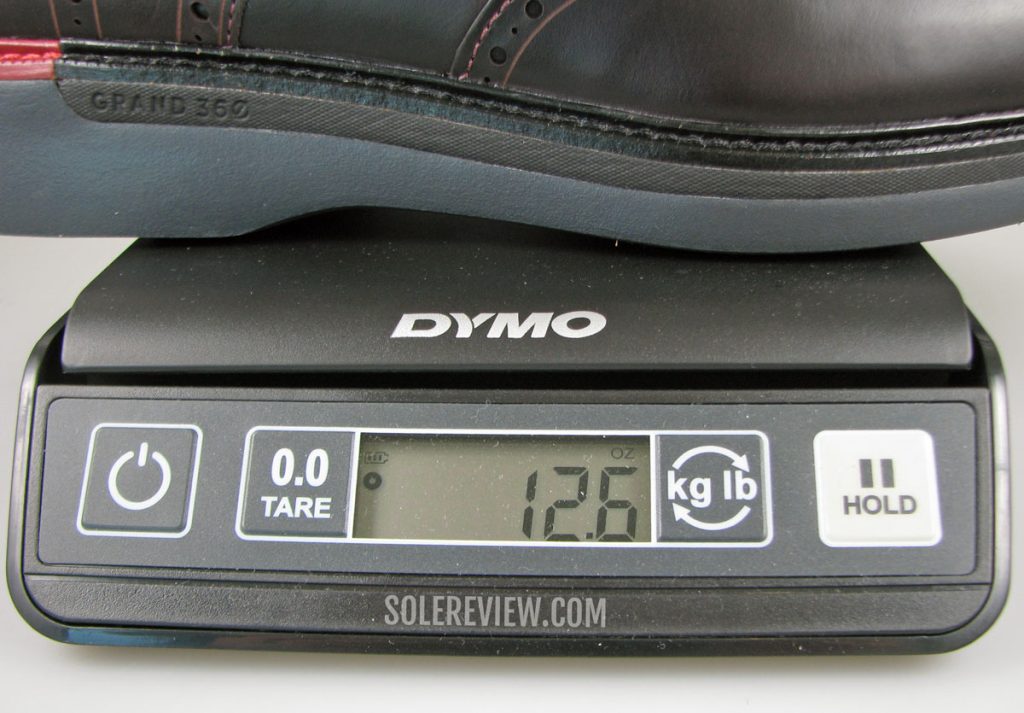 At just over 12-ounces for the median size, the Cole Haan Grand Ambition Wingtip is lightweight.

The cushioned midsole results in smooth and supportive transitions during the gait cycle. Within Cole Haan’s existing assortment, the Grand Ambition has one of the most comfortable midsoles for everyday use. The cushioning is great for walking, and the true-to-size upper also enhances the ownership experience.

The Cole Haan Grand Ambition Wingtip weights 12.5 ounces for a US 10, or just over 12-ounces for a median size 9. That’s light as it gets for a dress sneaker with a leather upper.

THE UPPER DESIGN, MATERIALS, AND FIT 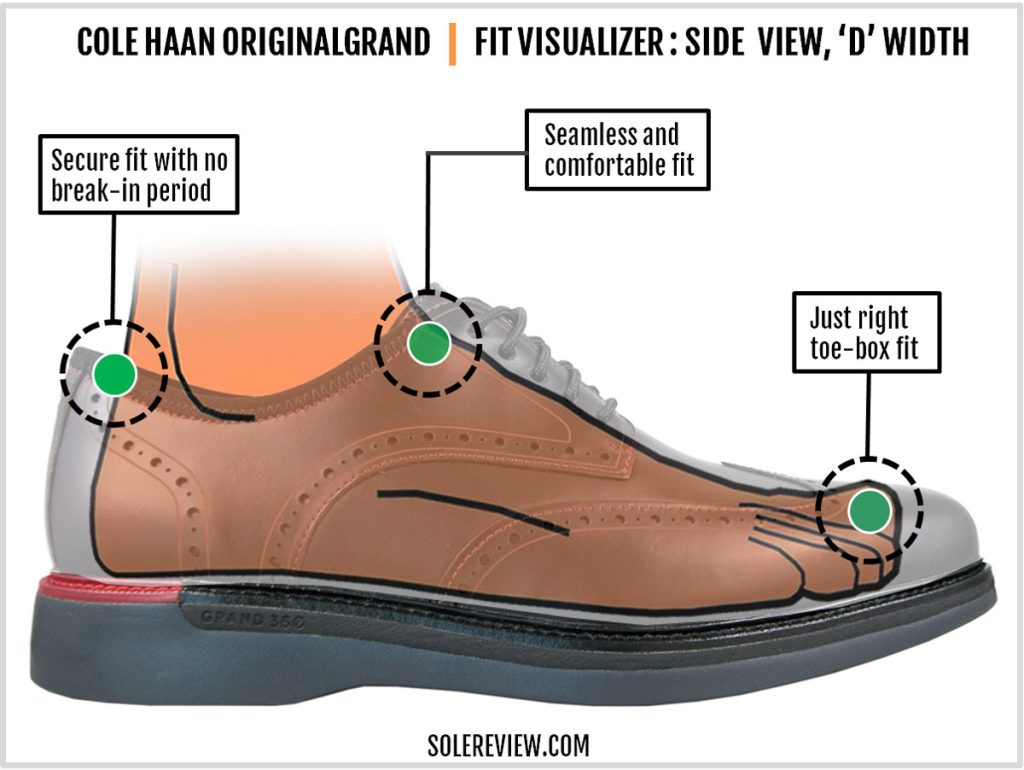 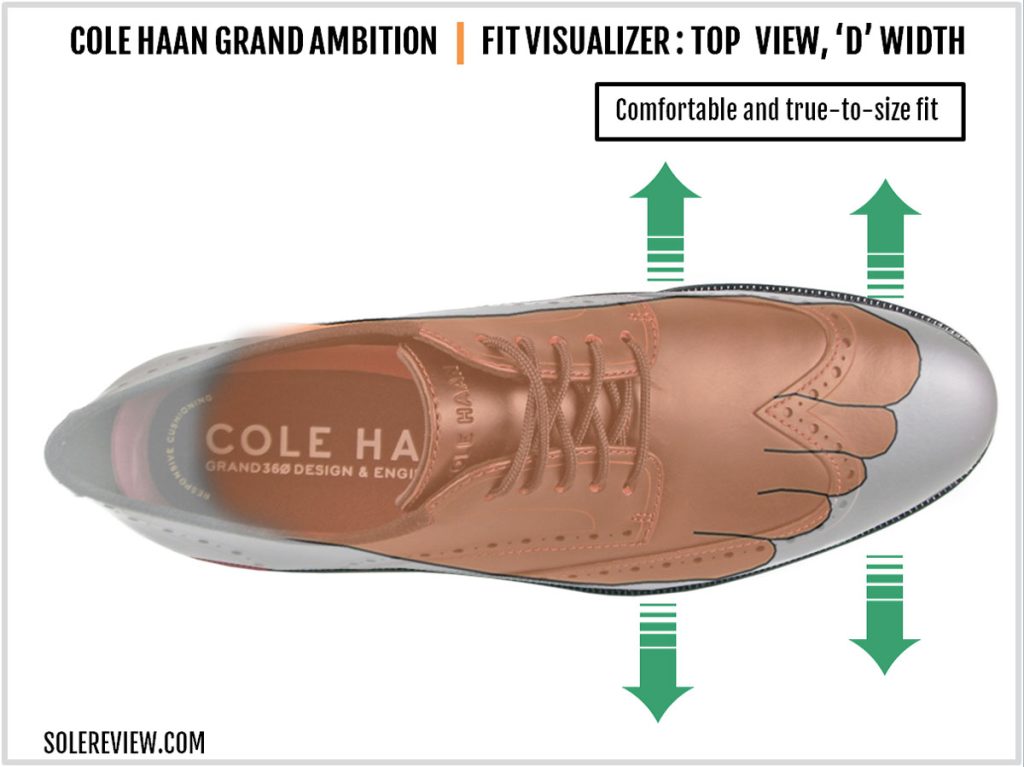 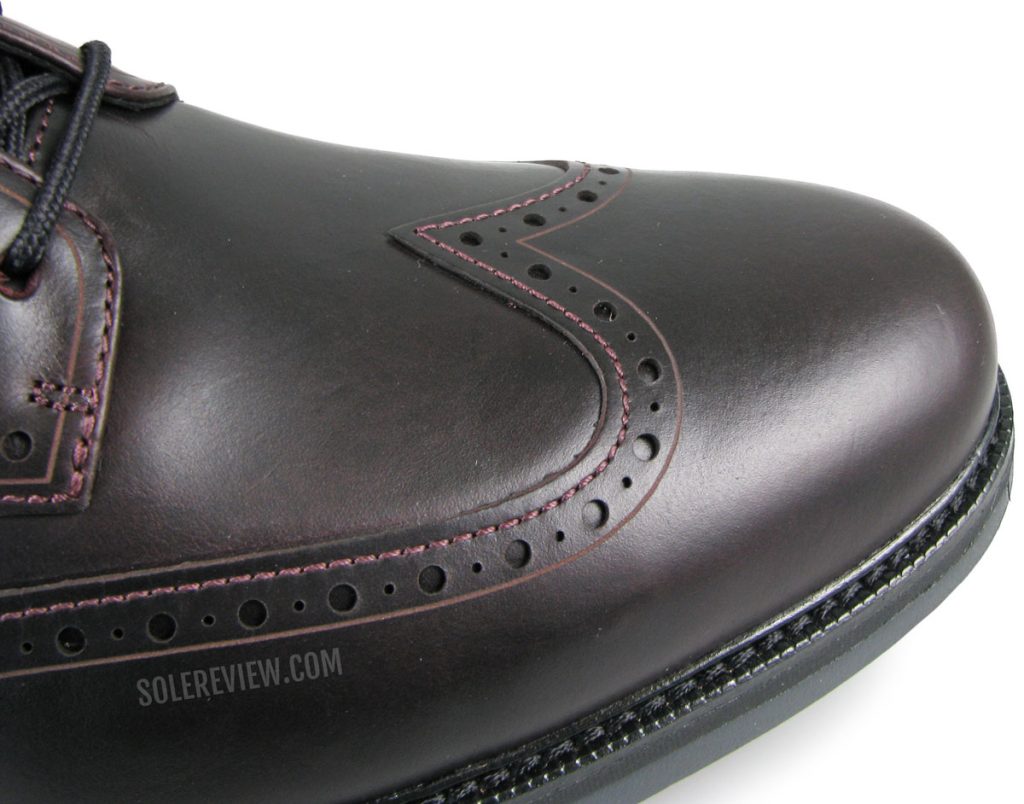 The Grand Ambition Wingtip has an accommodating fit profile.

The Grand Ambition Wingtip has a pleasing fit character. It fits true-to-size with an accommodating forefoot and toe-box.

Even with a thick pair of cotton socks, the foot doesn’t feel boxed in. The easygoing fit is similar to the Originalgrand, but slightly more relaxed.

While most folks with regular-width feet will fit into the standard Grand Ambition, there’s an optional wide size as well. 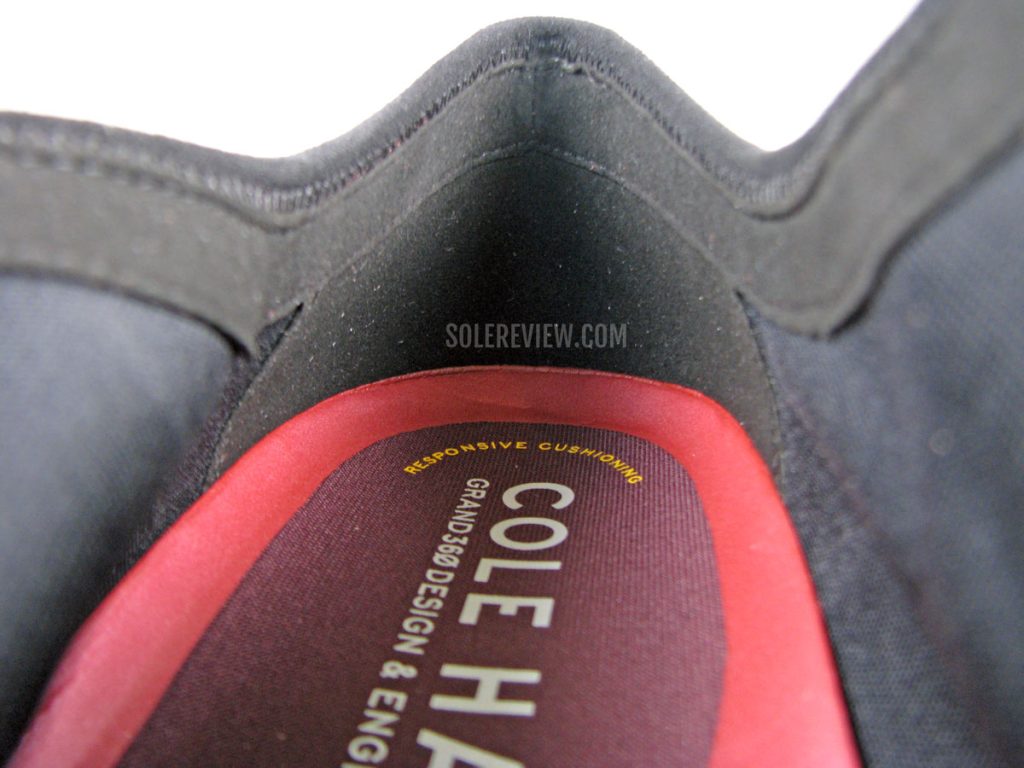 The heel has an internal counter and is lined with synthetic suede. 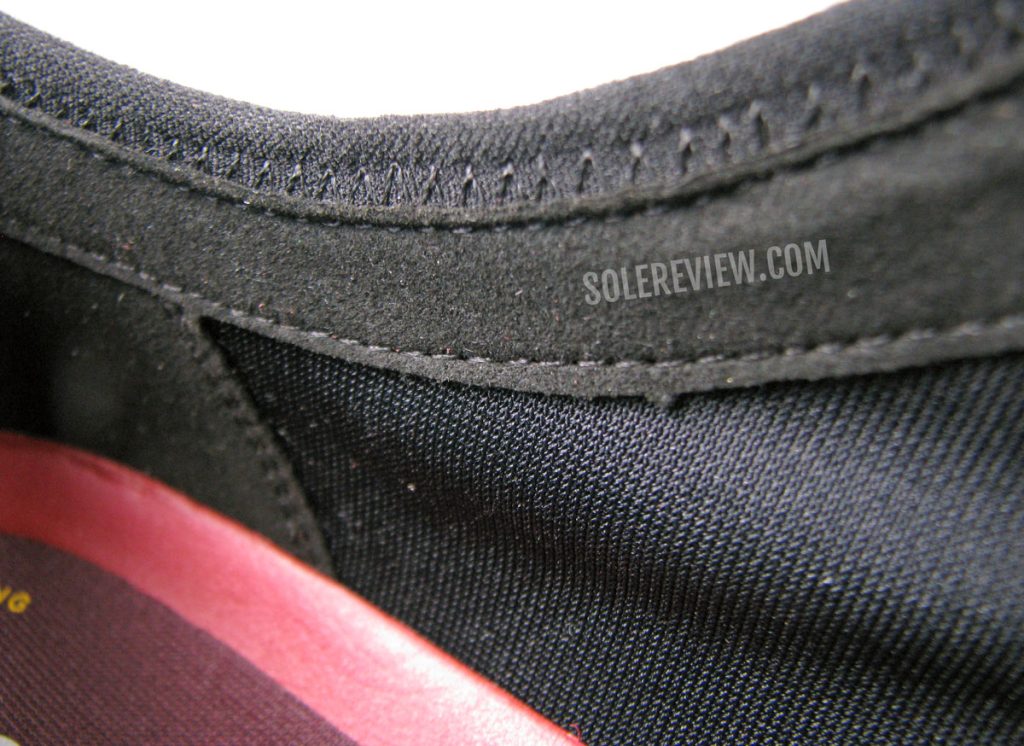 The mesh binding over the collar top-line is comfortable right out of the box.

There’s no padding inside the upper, not even on the tongue. Most of the lining is a smooth textile, and the collar band is backed with synthetic suede. The synthetic band works together with the stiff internal heel counter for a secure fit.

Usually, a non-padded heel area needs a break-in period. However, the Grand Ambition’s heel topline uses a Neoprene-like binding material that’s comfortable to wear right out of the box. 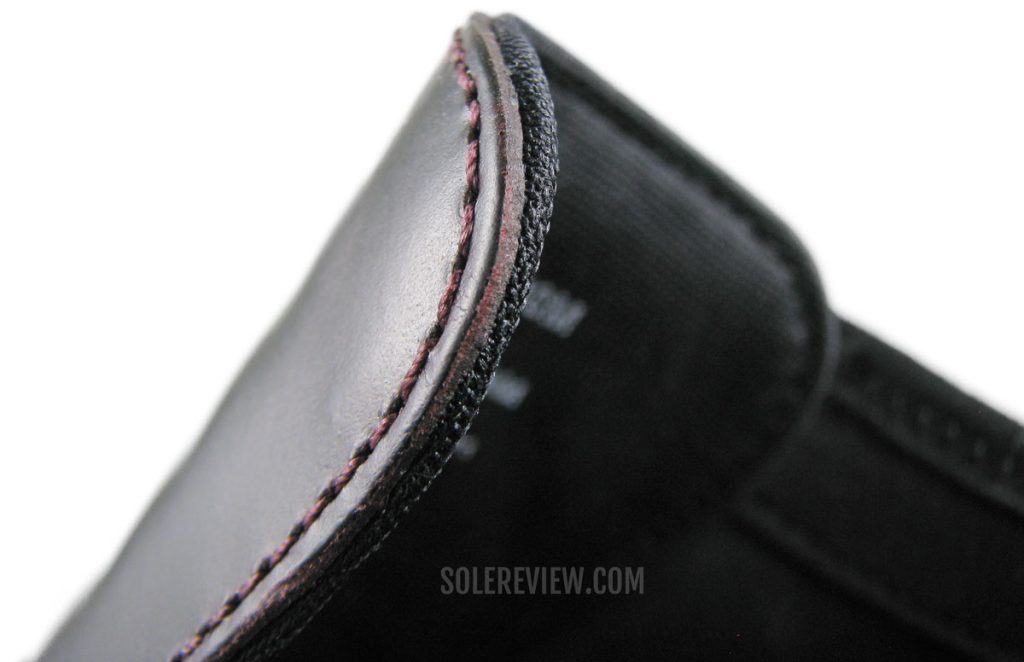 The tongue flap is not folded, but it does not bite.

The tongue flap isn’t soft or folded, but we did not experience any stiffness during our walks.

The tongue length plays a role here; being shorter prevents it from biting the instep. 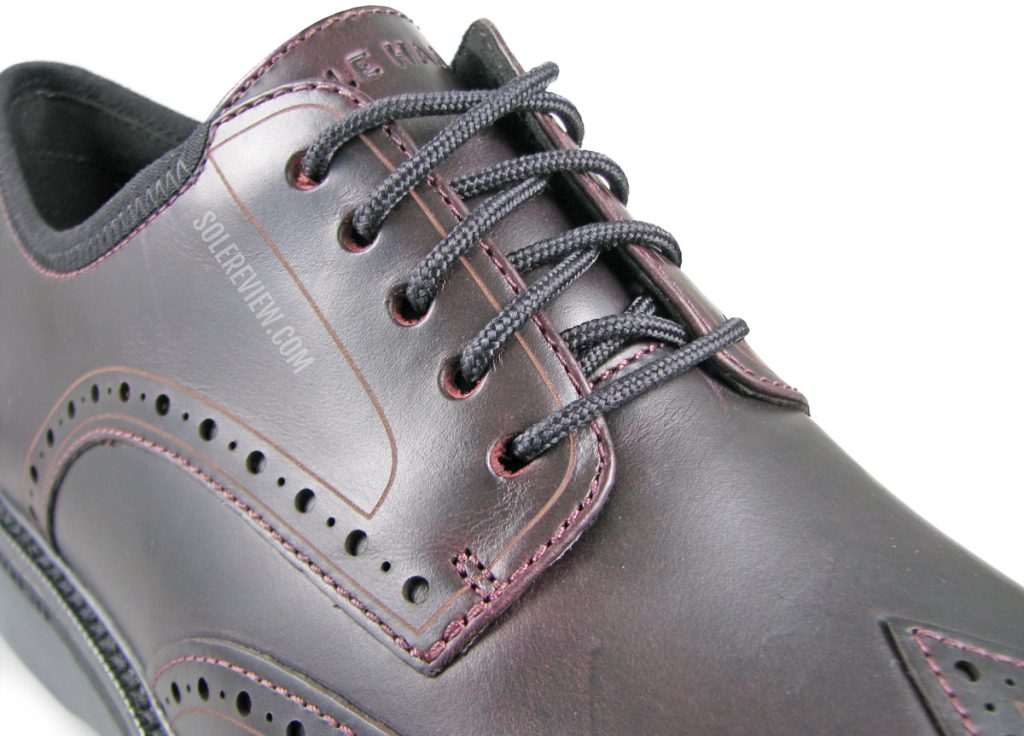 The sports laces look nice, but we prefer a waxed pair of dressy laces, please.

Despite the lack of padding, the top-down lacing pressure isn’t experienced. The external derby-style panels take some of the pressure off, and the athletic laces are soft too.

For a dressier aesthetic, these can be swapped with waxed laces. It’s worth highlighting that the laces seem thin for the large eyelet holes. While the larger holes make the laces easier to cinch, they seem oversized for the lace girth.

It’s a personal opinion, but we haven’t taken to the red aglets on the laces. It’s a nice color tie-in with the red pop of the heel welt, but the red aglets are a visual distraction over the classy Pinot/Bordeaux upper.

The lace tips also flap around during walking, and they don’t stay tied as well as waxed laces do.

Unlike the high-end Cordovan leather that ripples instead of creasing, the Grand Ambition creases like most entry-level leather footwear.

The ‘pinot’ leather color gives the upper a rich aesthetic. 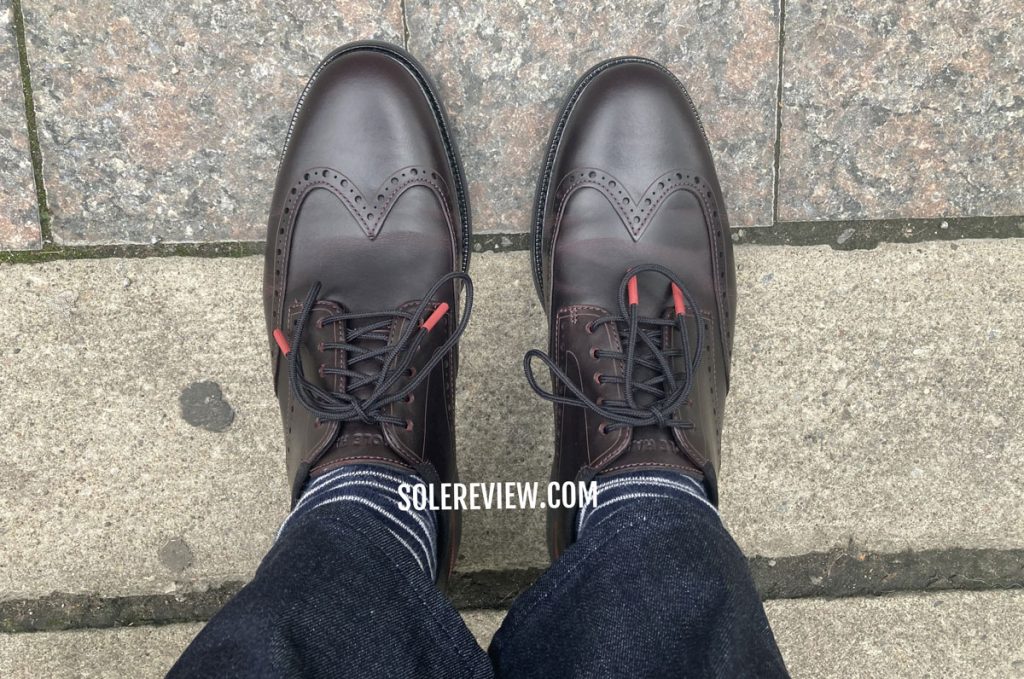 The creases take on a lighter hue after a few days of wear.

Out of the three color options in this model, the creases show the most on the ‘Pinot’ color that’s reviewed here. The creases take on a lighter hue, akin to an oiled leather.

So if you don’t like creases, then get the all-black or British Tan color. 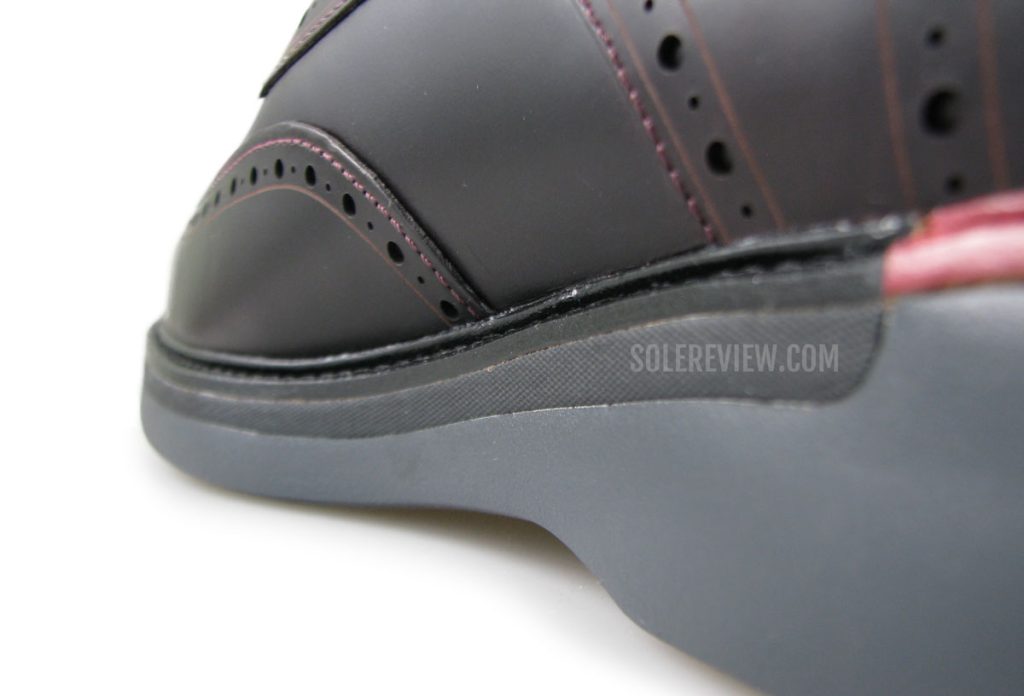 The Grand Ambition Wingtip is a cleanly-finished shoe.

The level of finish and detail of the Grand Ambition Wingtip is superior to some of the legacy Cole Haan models like the Originalgrand.

The exterior uses large leather panels for a streamlined appearance; there are no ugly seams splitting the panels into halves. 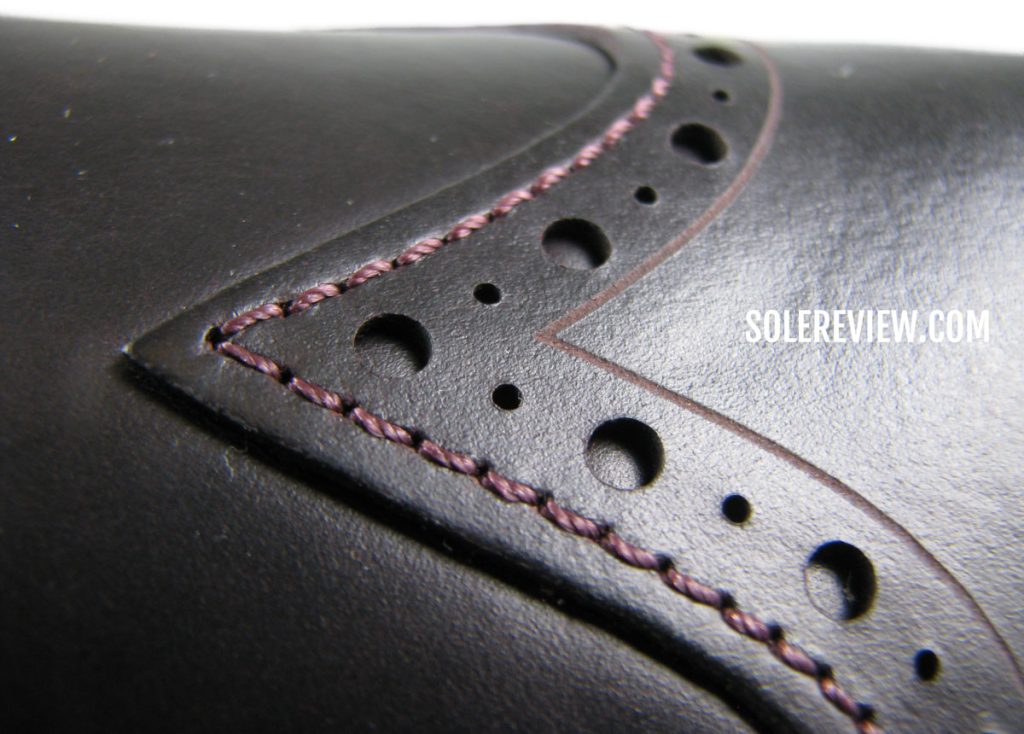 The upper is replete with cosmetic detail. One of Cole Haan’s favorite detailing method(s) is laser-etching, and the Grand Ambition has lots of it. The laser-etched lines add a design depth to the silhouette by complementing the natural lines of the leather pattern.

For example, the wing-shaped cut in the front is emphasized with a laser-etched ‘wing’ outline. The quarter and heel panels get similar outlines as well.

The brogue perforations do the rest by adding a touch of traditionalism to this dress sneaker. 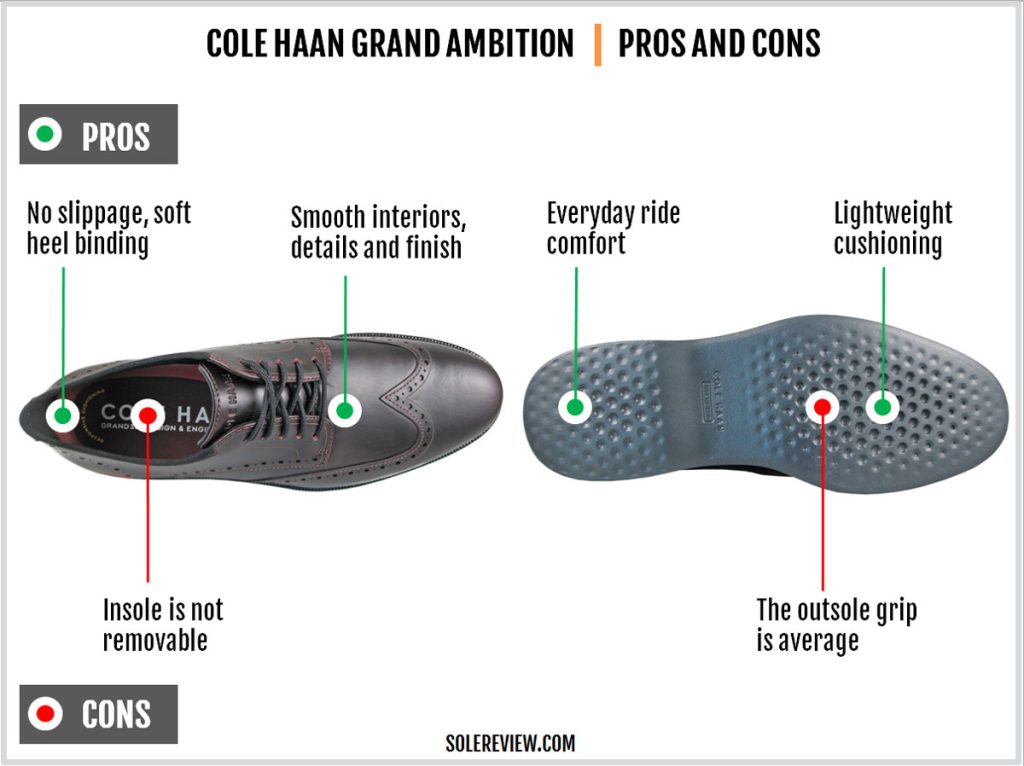 Of all the Cole Haan shoes we’ve reviewed so far, we like the Grand Ambition the most. The ride is soft and comfortable for daily use, and the well-proportioned upper creates an easygoing interior environment.

This is also a nicely-finished product that’s in line with its $190 retail price. The quality of leather and trims pass muster for this price segment, and the brogue + laser-etched details add contemporary yet classic styling. 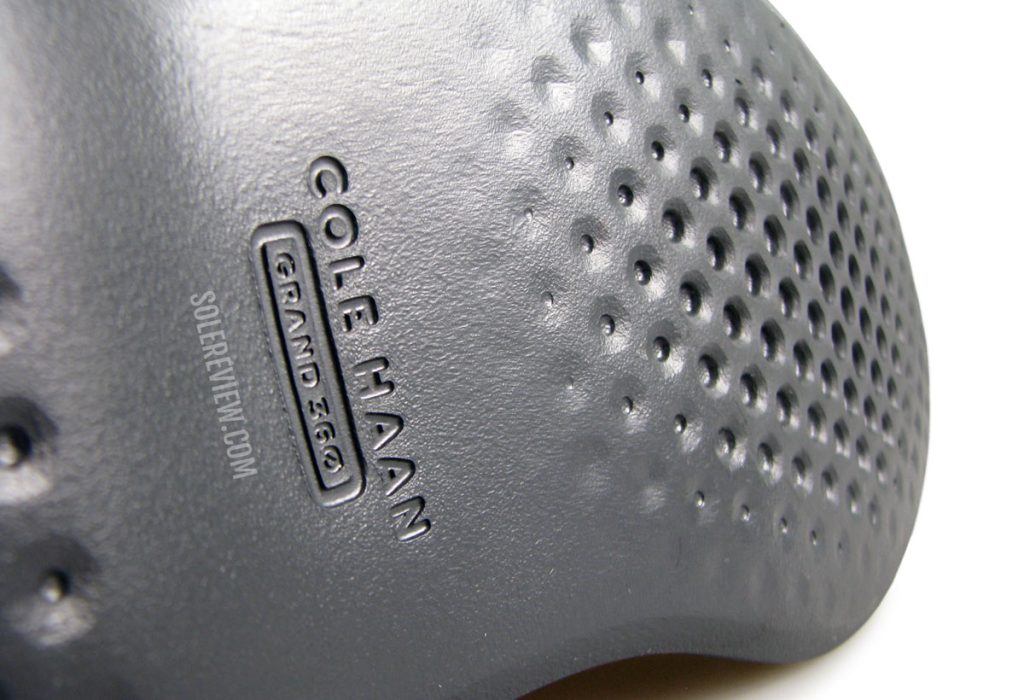 An EVA foam outsole will not grip as well as rubber soles.

Not much can be done about the level of outsole grip. Most EVA foam outsole under-performs in this department when compared to rubber or Polyurethane outsoles.

We also wish that the insole was removable so that the Grand Ambition could be orthotic-friendly.

SHOES THAT ARE SIMILAR TO THE COLE HAAN GRAND AMBITION WINGTIP 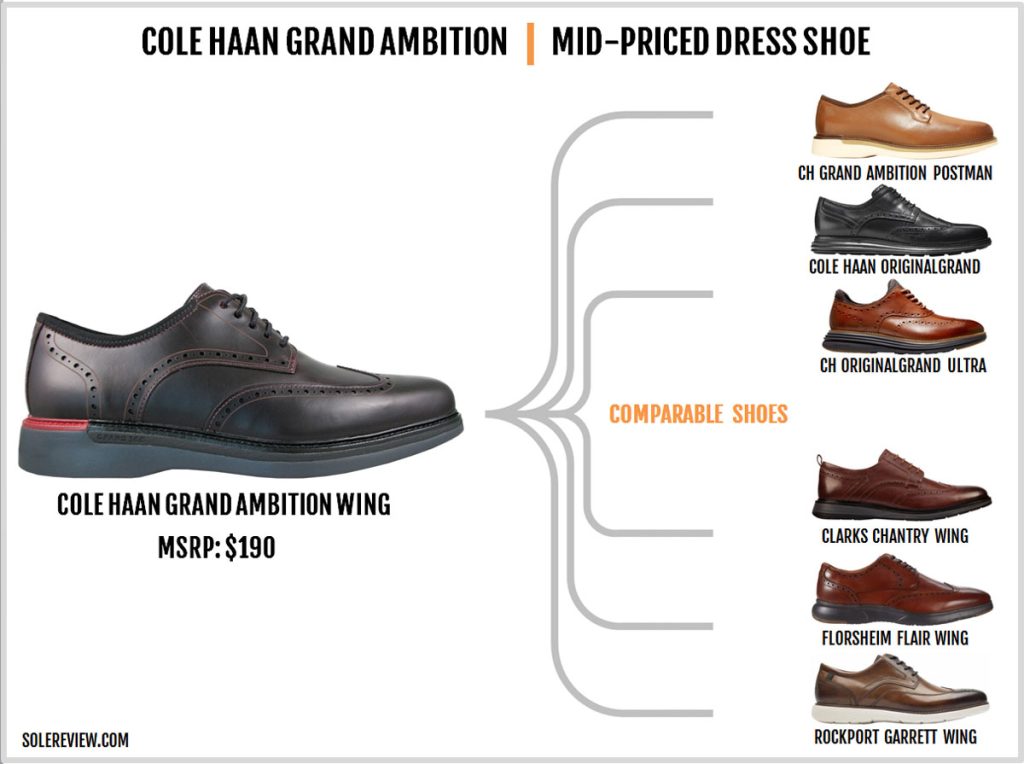 The GA Postman’s upper is styled differently, as it’s based on a plain-toe silhouette sans cosmetic details. The large leather panels give it a classic faux ‘whole cut’ look.

Our recommendations from Clarks and Florsheim would be the Chantry Wingtip and Flair Wing respectively. Rockport also offers several dress sneakers in its catalog – like the Garett and Total Motion Sports Wingtip, to name a few.