That’s because the outsole design moves from a pod-like articulated layout to a kind where there are a few number of rubber pieces. Add to that the increased thickness and reduction of one flex groove, and the entire forefoot becomes harder to bend – and firmer.

As a result of this update, transition quality is also affected. While the Inspire 12 is no slouch, the added mass makes it feel a bit sluggish – in contrast to the relatively faster, heightened ground feel of the Inspire 11.

A better way to put this is that the 2015 Sayonara 3’s forefoot feels like the 2014 Inspire 11, with its split outsole and higher count of flex grooves. This also implies that the Sayonara 3 has also bulked up over the Sayonara 2, but that’s a story for another day.

Switch to the Inspire 12’s rear-foot, and the main difference between the latter and Inspire 11 is a softer medial side heel and a lower degree of responsiveness. The red colored foam insert below the Wave plate is softer than last year, and there’s more of it under the medial heel. That delivers a softer ride experience on that side of the midsole.

Which is ironic, because this is at cross-purposes with the Inspire 12’s design goal. While it is not expected of Mizuno Wave to match the ride impact of a dual density post, the shoe still attempts to create a firmer medial side.

The ‘waves’ are higher on the medial side, meant to limit the midsole compression in that area. So inserting a softer foam somewhat counters that purpose, and you sense that the Inspire 12 has a softer medial side than the Inspire 11. 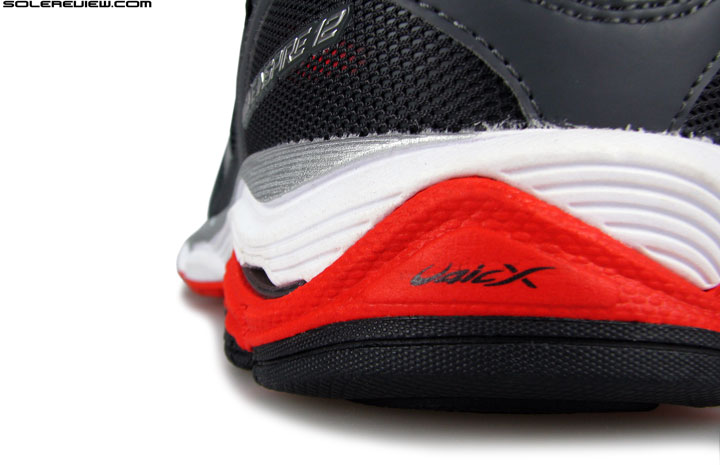 Regardless of the changes, the Mizuno Inspire 12 is still very supportive. The Wave plate acts as a gatekeeper, keeping excessive compression under control. 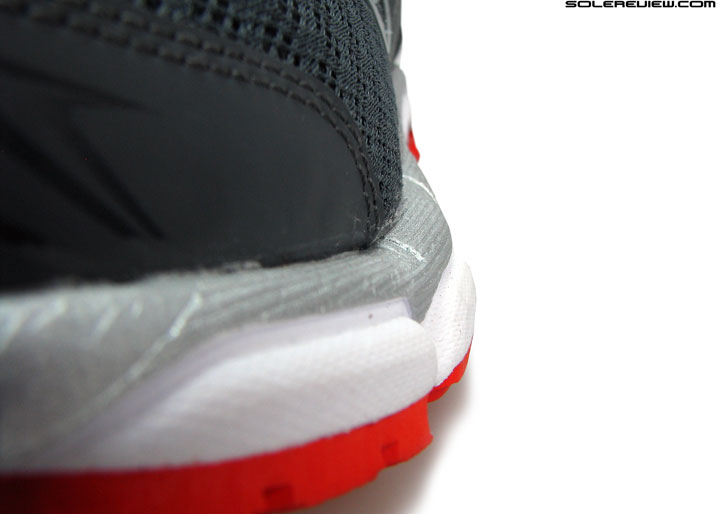 Much like other Mizuno models, the forefoot has a broad outwards flare. Makes the ride planted and stable.

Some of the Inspire 11’s desirable characteristics make their way to the Inspire 12. The forefoot has an outward facing flare which can be best described as industry leading, producing a wide and stable base.

The rear-foot might feel softer, but is in no way unstable or biased. As far as a supportive feel is concerned, the hard Mizuno Wave plate acts as a midsole gatekeeper. An equalizer of sorts to counter the change(s) in foam densities around it, if you will.

And yet the Wave plate isn’t immune to changes in cushioning behavior. The Inspire 12 feels less responsive and snappy than the Inspire 11, and we’ll tell you why.

Any midsole cushioning feel is based on the path of least resistance. Let us illustrate this principle with an example. Assume a shoe midsole with two stacked foam layers, one very soft and another firm, yet responsive.

During walking or low speed running, the softer foam gets activated as a cushioning agent first, deforming every time you load your weight on it. The firmer layer might not get activated because the minimum threshold for its compression is not reached at lower speeds. But once you increase your pace and cadence, you begin to tap into the responsive nature of the firmer midsole material. You start reaping the performance benefits of such materials (adidas Boost, Nike Zoom, Mizuno Wave) with higher speed.

The same rule applies to the Wave design. Most Mizuno shoes use very firm midsole foams because it helps isolate the snappy behavior of the Wave plate. This way, the Wave plate serves as the path of least resistance – consequently delivering a heightened sense of responsiveness when you footstrike. 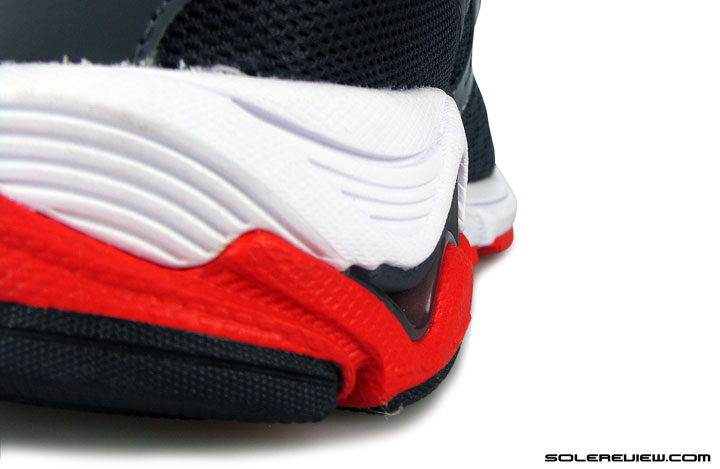 With the lower foam softer than before, cushioning follows the path of least resistance. The red foam compresses first, in the process, it dilutes the responsive snap of the Wave plate.

So what happens on the Inspire 12 is this: the softer (red) foam tends to compress first, which dilutes the Wave experience. The Wave plate does compress, but only after the softer foam goes all the way.

Like the Inspire 11, it doesn’t take a whole lot of effort to run in the 12. Transitions are consistent, potential sink zones are prevented by the firm Wave plate, and the top midsole layer has a uniform feel throughout. Yet you can’t escape the feeling that you’re lugging slightly more weight around, and the scenery doesn’t go by as fast as it did on the Inspire 11.

All in all, the Inspire 12 is a curious update full of surprises. It is still supportive in Mizuno’s own unique way, but no more than the ‘neutral’ Wave Rider 19, which oddly turns out to be a firmer shoe. The increased weight and changed ride manners also brings the Inspire 12 closer to the Paradox 2, blurring the distinction between these two stability models.

(Disclaimer: For this review, Solereview bought the shoe at full US retail price.)

Looking to upgrade your older Mizuno Wave Inspire 11 to the latest version, but not sure how the 2015 model compares? We can help here. The following infographic is a ready-reckoner for what changes you might expect in the new model vs. old. To make this more fun, we’ve put in a system of percentage match, which calculates a weighted average for a set of attributes.

A higher or lower match percentage is neither good or bad. The % number just tells you how similar or distanced the new shoe is from the previous version. Total match % is a result of weighted averages. 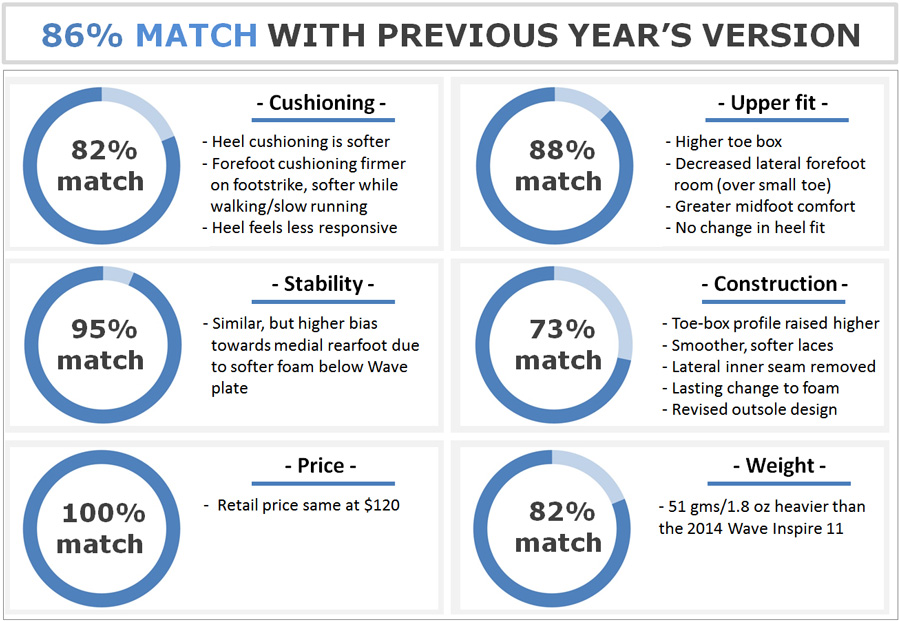