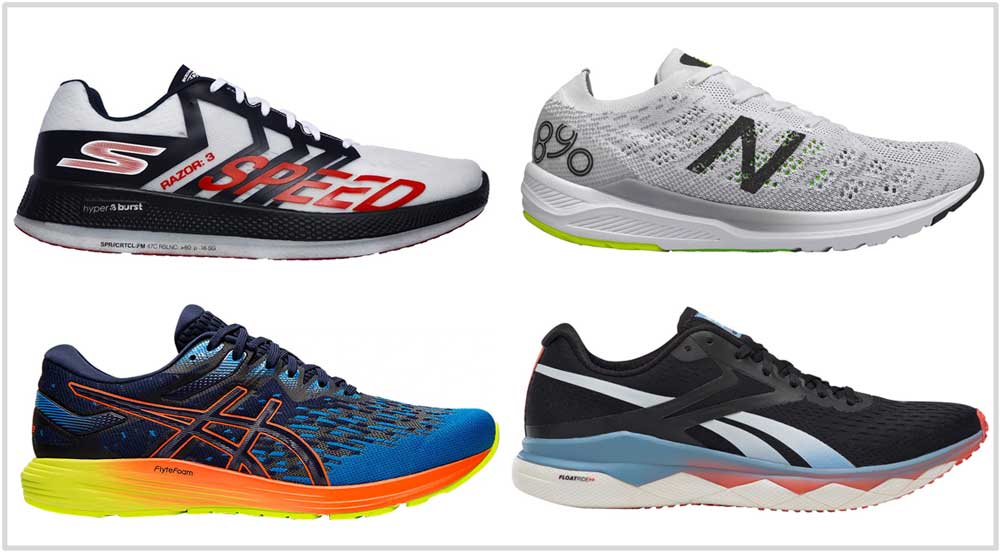 This article has been updated with current models for April 2020. We’ve replaced the adidas adios 4 and the Reebok Floatride Run Fast with their updated versions. The New Balance Fresh Foam Tempo and Asics Lyteracer 2 are new adds. The New Balance Zante Pursuit has been removed.

A 10k run is a popular distance choice for many reasons. It’s a gateway for runners who eventually aspire to run half and full marathons; it gives you an idea of what longer races feel like. Even when you’re not racing, a 10K training run is an excellent workout distance to build stamina without testing the limits of your body.

Depending on your pace, running a 10K involves being on your feet anywhere between 30 minutes to a little over an hour. If you’re running sub-40, that means you’d want (not need, though) a shoe that feels fast.

On the other hand, if finishing a 10K takes an hour or more, then you need a shoe with enough cushioning on tap. In other words, a running shoe needs to meet the speed+endurance requirements of a 10K run.

If you’re wrapping up 10K runs in under 40 minutes, then perhaps you’d like to read our buyer’s guide for 5K races. Those models will do just fine for fast 10K paces.

Given the context, we’ve put together a list of recommended shoes that work for both categories of runners. So regardless of whether you’re running a 35 minute or an hour+ 10K, these shoes will do a splendid job.

There’s another reason to consider this list. You can also use these shoes for half-marathons, a distance where thinner racing flats (otherwise suited for 5K races) may be found lacking in cushioning.

Our selection criterion is rather straightforward. The shoes below have a good blend of cushioning and fast; in other words, they’re lightweight trainers with enough midsole to go the distance.

Here’s our pick of eleven best shoes for running a 10K, sorted alphabetically. If we had to pick two, it would be the Reebok Floatride Run Fast 2 and the New Balance 1400V6.

Compared to the adios 4, the adizero adios 5 looks like a changed shoe from the outside. However, the basics stay the same.

The low-profile midsole still has full-length Boost foam – the only difference is that the Lightstrike EVA foam covers the forefoot and part of the midfoot.

With this arrangement comes a happy blend of cushioning and speed-friendly support. The softer Boost core keeps the ride cushioned while the firmer sidewalls help quick transitions and overall stability.

The space mesh upper is now sleeved, and the uber-snug fit keeps the foot locked down during fast 10k runs. The outsole uses a grippy Continental rubber along with a Torsion shank for midfoot rigidity.

The Boost version of the Boston debuted a few years ago, and since then, it’s built a solid reputation as a cushioned lightweight trainer.

The simple mesh and synthetic upper is modeled on classic racers, and the low-profile Boost midsole provides plenty of fast cushioning for runs of up to a half-marathon. The Boston 8 features a completely new upper and sole design, but gets to keep its core character.

The adizero Boston 9 is also due for general release soon.

The Asics Lyteracer 2 is, ahem, a racer. However, this isn’t your typical all-out racing flat. There’s a fair bit of foam padding contained with the Flytefoam midsole, and you also get a proper rubber outsole complete with a midfoot shank.

The firm cushioning of the Lyteracer is speed-friendly as it assists quicker turnovers. At the same time, the foam layers keep the foot protected during high-cadence runs.

The synthetic suede and spacer mesh recreates a classic racer upper that fits narrow for a secure lockdown. Fused logos and high-density printing add a modern touch to the retro design.

Since its launch four years ago, the Dynaflyte has proved to be a silent performer. It isn’t as popular as some of other Asics staples such as the GT-2000, but it is a versatile and relatively lightweight shoe for most kinds of runs, 10K included.

The Dynaflyte 4 has a softer and improved fit for higher interior comfort – a change that the DS Trainer 24 also went through. The midsole and outsole look the same but has a tweaked foam – thus shaving off an ounce from the Dynaflyte 3. The Flytefoam midsole is cushioned enough for 10K runs and beyond, yet has a firm character which helps transitions.

For those who are missing the Sayonara – version 2 to be specific – the Wave Shadow 3 is its spiritual replacement. The low-profile cushioning feels fast and snappy because of the Wave plate and the firm midsole. 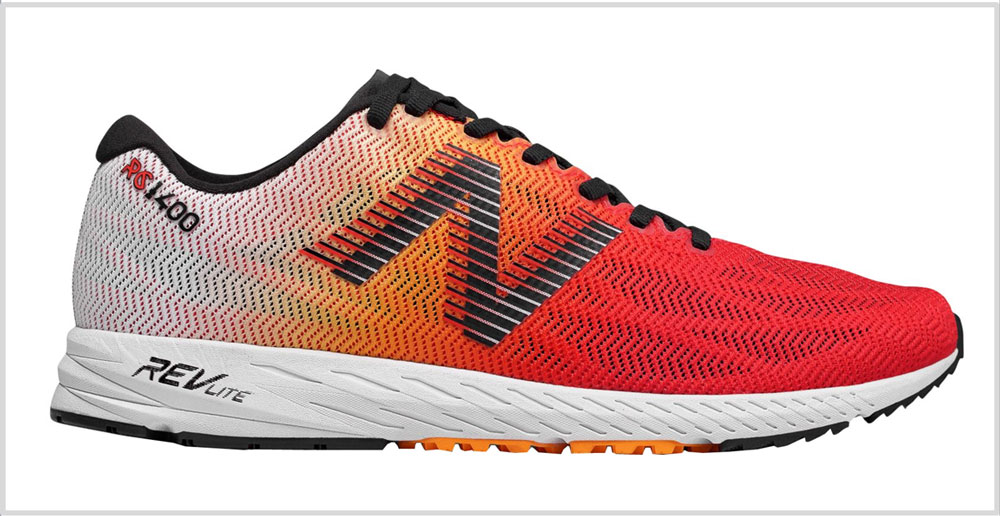 The 1400V6 also features on another buyer’s guide for shorter races, and that’s because the 1400 is an excellent do-it-all shoe.

The Revlite foam midsole is adequately cushioned for 10k distances without sacrificing the ‘fast’ feel. The mesh upper has a snug yet smooth interior that blends comfort with a secure fit.

This shoe is easily the softest on this list. So if ride comfort is a priority, then getting the Fresh Foam Tempo is a good idea.

That being said, the term ’softness’ is purely relative.

The ride softness doesn’t come at the cost of speed-friendly manners. Sure, it doesn’t feel as ‘fast’ when compared to shoes such as the NB 1400 or the Asics Lyteracer.

The Fresh Foam Tempo is as close as one gets to the original Zante formula, so this is a trainer that balances tempo-friendly manners with ride and fit comfort. Even the upper has an easygoing nature; it doesn’t fit as narrow as how traditional racers do.

If you bought the 890 V7 for your 10K runs, you’ve made an excellent decision. The 890 was thoroughly refreshed last year, and the result is a very light (7.2-ounces) shoe with a firm ride and an airy, spacious upper.

The low weight disappears over your foot during the 10K while the firm ride underneath helps maintain the tempo. The insole tends to slide out so pasting it down is recommended.

We featured the Streak LT4 – a lightweight road racer – on our list of shoes for 5K races. The Zoom Streak 7 is a more ‘cushioned’ version of the LT4, though that’s purely in a relative sense.

The Streak 7 has more midsole volume than the LT, so that makes it more comfortable while delivering a speedy ride experience. The airy upper has a smooth and secure fit.

This 2020 release is the second edition of this model. The ride is identical to the V1. The upper gets a new mesh and additional layering – courtesy of the classic Reebok Vector logo.

Reebok’s Floatride foam is akin to an improved and lighter version of the adidas Boost. And it makes sense, because Reebok is owned by the adidas group. Since its first use in a sports-casual model, the Floatride foam has found its way into the performance section of Reebok’s running line.

We see the Reebok Floatride Run Fast as a lighter and faster version of the adidas Boston Boost. The shoe features an EVA rim over the Floatride midsole for stability.

The Floatride foam works as advertised, and on the Run Fast there’s just enough of it for speed-friendly cushioning. The outsole is completely covered with granular lugs for a best-in-class grip.

The Run Fast’s narrow upper fit is standard fare for running shoes of this category, so no surprises here. Reebok (and adidas) should offer widths though.

To the outside world, Skechers is known as a family footwear brand. When you visit its website, you will see a vast assortment of affordable athleisure shoes for everyday use.

But now and then, Skechers shows everyone what it’s truly capable of. Many gems have come out of the Californian brand over the last several years, and the GoRun Razor 3 Hyperburst is one of them.

Skechers calls its new midsole material HyperBurst – a lightweight and responsive foam material not found elsewhere. It has excellent rebound properties while helping the Razor 3 achieve an incredible 6.5-ounce weight. The Razor 3 is a shoe which feels at home during faster paces than it does at lower speeds.

The Razor 3 Hyperburst has a fit snug and is true-to-size for a racer – that said, some might need to go a half-size up for comfort. Admittedly, Skechers isn’t exactly a brand on everyone’s radar when looking for a cushioned road racer, but this shoe packs serious street cred.

All in all, it’s a great pick for running a 10K road race.