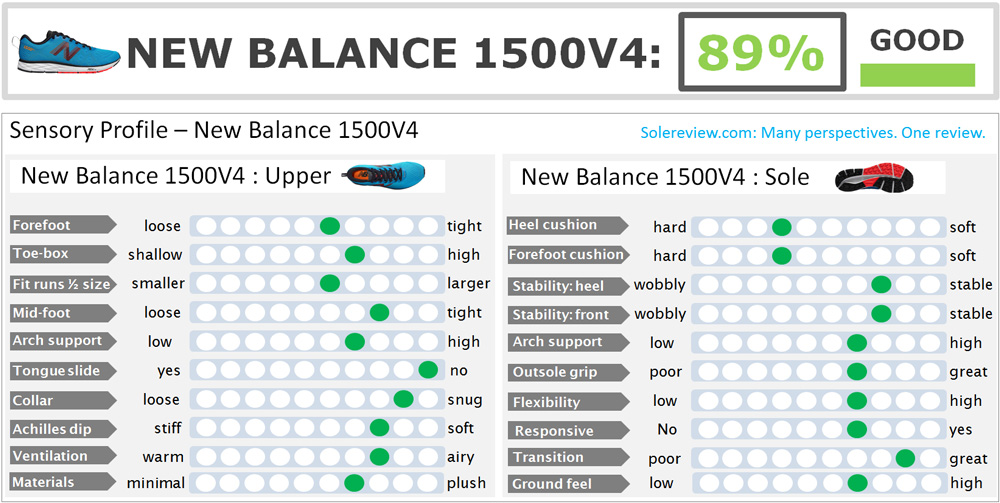 New Balance’s marketing pitch: Tackle any distance, from a 5K to a marathon. 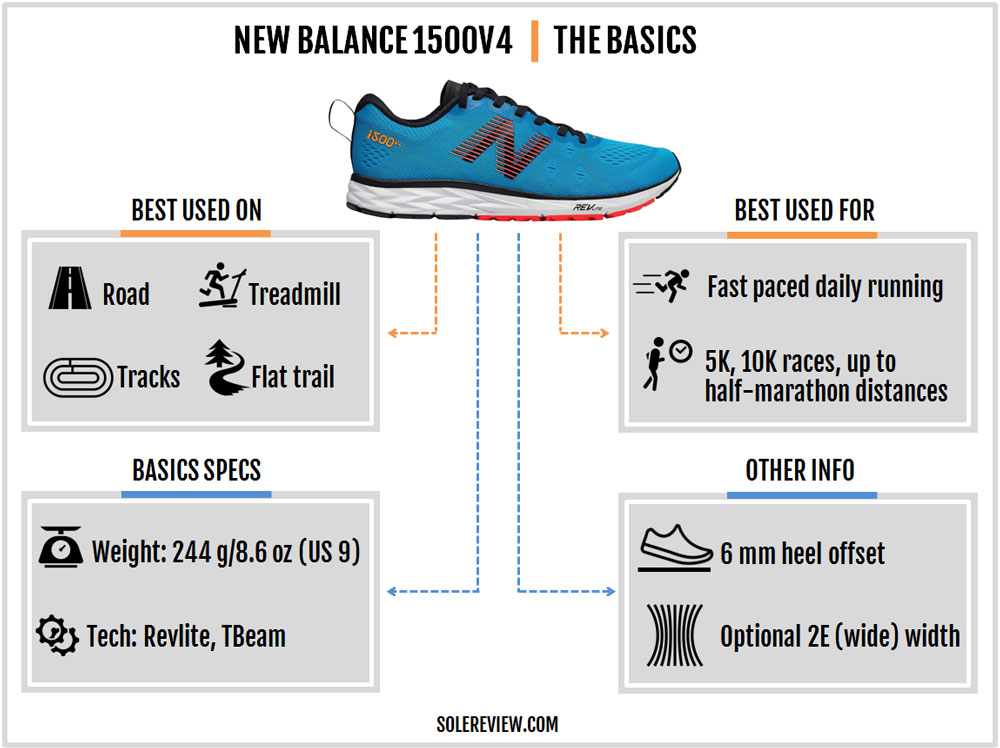 The New Balance 1500 has been fairly consistent since its debut four years ago. Admittedly, while the versions V2 and later failed to recreate the magic of the V1, the successive updates haven’t upset the shoe’s core character.

That, by itself, is a rare distinction in an industry where yearly shoe updates can be upsetting. And before we get to the review – what is the New Balance 1500?

The 1500 is a fast trainer/racer with a firmer medial post. There aren’t many of those around. Though shoes like the Asics DS Trainer and adidas Tempo exist, they are more cushioned. Also, the 1500’s medial post is a baby-sized version of what you normally find in support trainers.

Thus, while the 1500 markets itself as a ‘support’ shoe, it also works for runners seeking a neutral ride experience. The small medial post is barely noticeable.

A few readers have mentioned that the medial post becomes slightly noticeable after a few hundred miles. This happens when the rest of the (softer) midsole undergoes compression while the medial post does not. Even so, the sensation is not uncomfortable so there’s little to be concerned about.

The V4 has the same midsole, outsole, and the insole as the V3 so the ride manners are identical to the latter. What’s changed is the upper design which marginally increases the toe-box height and width. Visually, the V4 is a much cleaner shoe as it no longer relies on synthetic upper overlays.

The introduction of the New Balance 1500T2 could be a reason behind the V4’s simplified upper. The T2 has the same midsole as the V4 but with a more secure upper fit. This new shoe was originally called the 1500V4 Boa; the suffix is a reference to the popular cable-based lacing system.

Using Boa allows the shoe to be cinched by turning the dial. The T2 version is targeted at triathletes. During switch-overs, time is at a premium so features like a slip-on fit and quick lacing help greatly.

The superior upper grip also makes the T2 better than the standard 1500 for packed trails. The 1500T2 deserves a review of its own, so we’ll leave it be – for now. 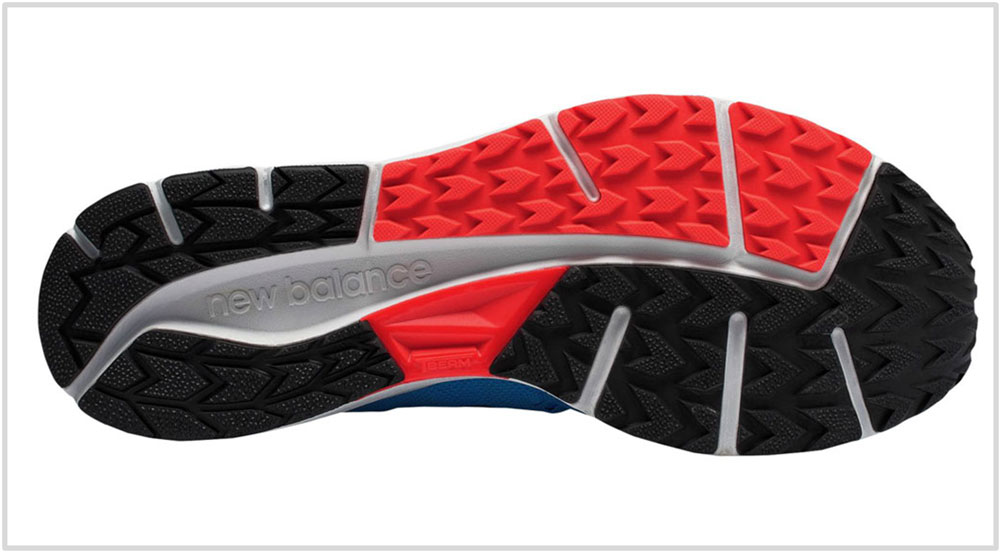 The 1500 blends three things extremely well: the quality of support, transitions and cushioning. The combination of the firm, low-profile midsole and the midfoot half-shank make the ride supportive. The hard medial post integrates well with the rest of the firm midsole, so there’s little in way of cushioning bias.

The 1500 doesn’t skimp on outsole rubber, as most of the surface is covered with grippy slabs. Splitting the outsole is a transition groove running down the center – this deep channel of exposed foam makes the transitions smoother and helps center the weight during the gait cycle. 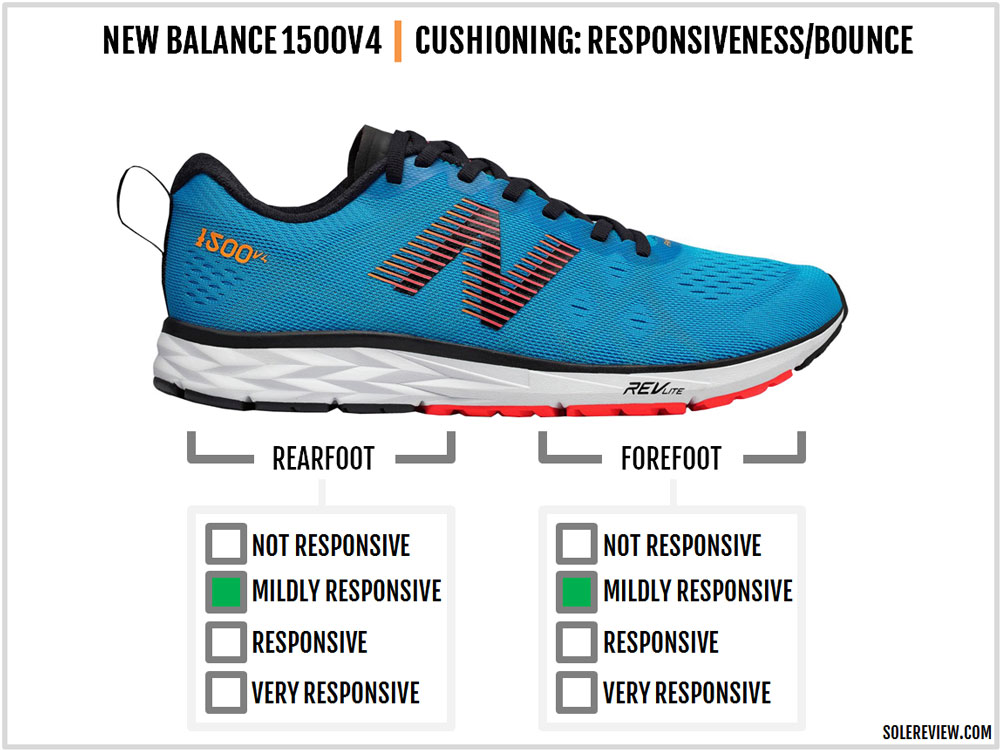 ‘Responsive’ isn’t a term we’d associate with the 1500. The transition groove splays a bit when loaded, and the result is a slightly responsive ride. The compression molded insole also delivers a limited amount of spring-back.

Rather than responsiveness, the 1500 excels at ground feedback. The low-profile and firm midsole works together with the outsole to produce a strong sense of connection with the running surface.

This feedback is a part of the 1500’s ‘fast’ feel which is consistent regardless of your running pace. No matter if you’re a 20 or 30 minute 5K runner, the 1500 feels efficient. The forefoot has flex grooves but isn’t overly flexible. This quality makes the forefoot transitions efficient.

The original 1500V1 was an excellent track trainer, and the V4 comes a close second. We say this because the forefoot outsole lugs aren’t as aggressive (as the V1) and the toe-box fit is more relaxed.

The V4’s outsole grip is excellent by most standards, but we loved the V1’s nib-like forefoot. Relaxing the upper fit (we’ll discuss this in detail in the next section) makes the 1500 feel less ‘sharp’ on tighter bends of 200m tracks. The difference in toe-box lock-down will be felt to a greater extent by forefoot strikers.

The Boa-equipped 1500T2 has a more secure fit, but then that’s a story for another day. 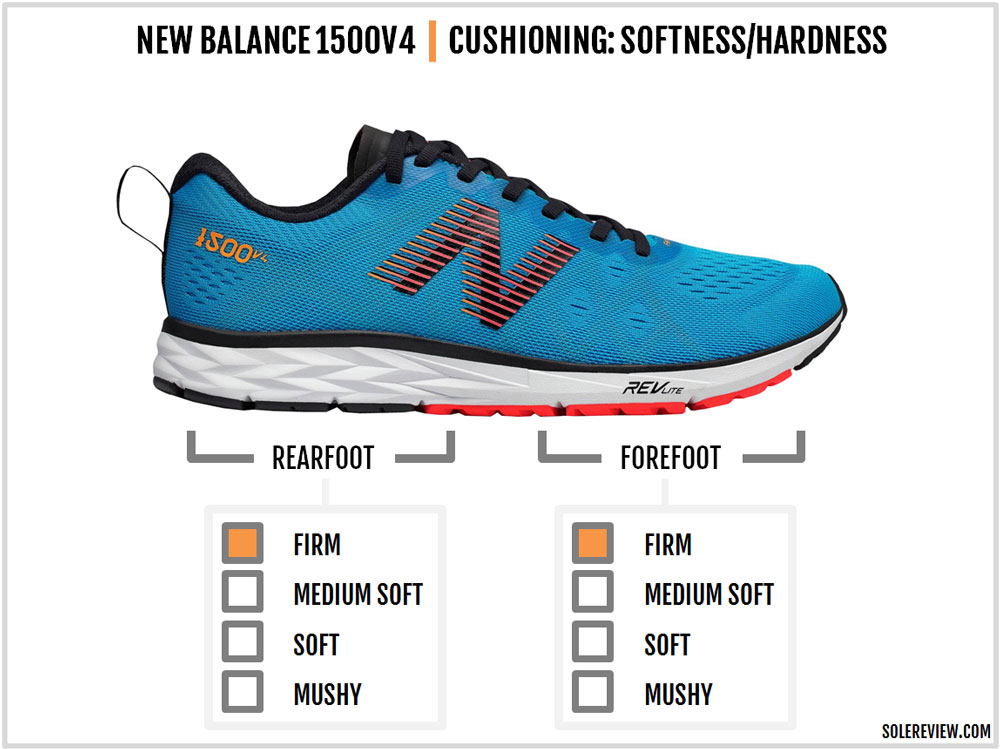 New Balance categorizes the 1500 as a ‘competition’ shoe along with some of its other racing flats. But the 1500 isn’t a pure flat; its midsole is relatively well endowed for its class.

Its 6 mm drop midsole has enough padding to go a half marathon distance. The removable insole is pretty cushy at first, and the Revlite midsole offers adequate insulation from the hard running surface.

Though New Balance advertises the 1500 as a shoe suitable for runs of up to a marathon, we suggest that you limit the 1500 to a half. Most runners will find the 1500 to be harsh when used for 26.2 miles. A shoe like the Boracay or even the Zante will be better marathon shoe choices. 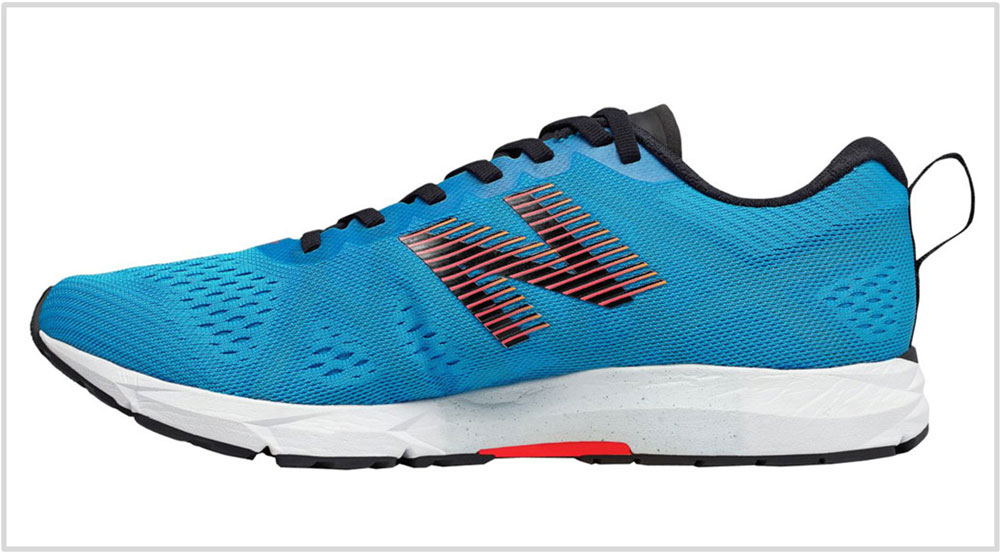 The 1500 has always had a snug upper fit, and that doesn’t change with the V4. From the outside, however, the 1500V4 appears transformed. 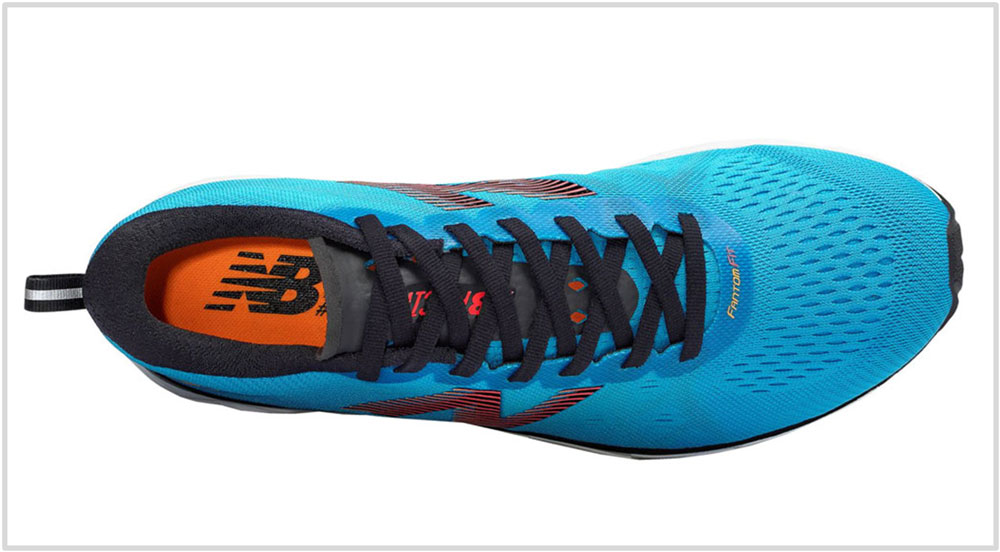 The synthetic overlays seen on the V3 are now replaced with a single piece of engineered mesh and transparent, fused eye-stay.

That said, the toe-box has an internal bumper, and a latticed network (not seen in the pictures) of internal layers provide structural support. 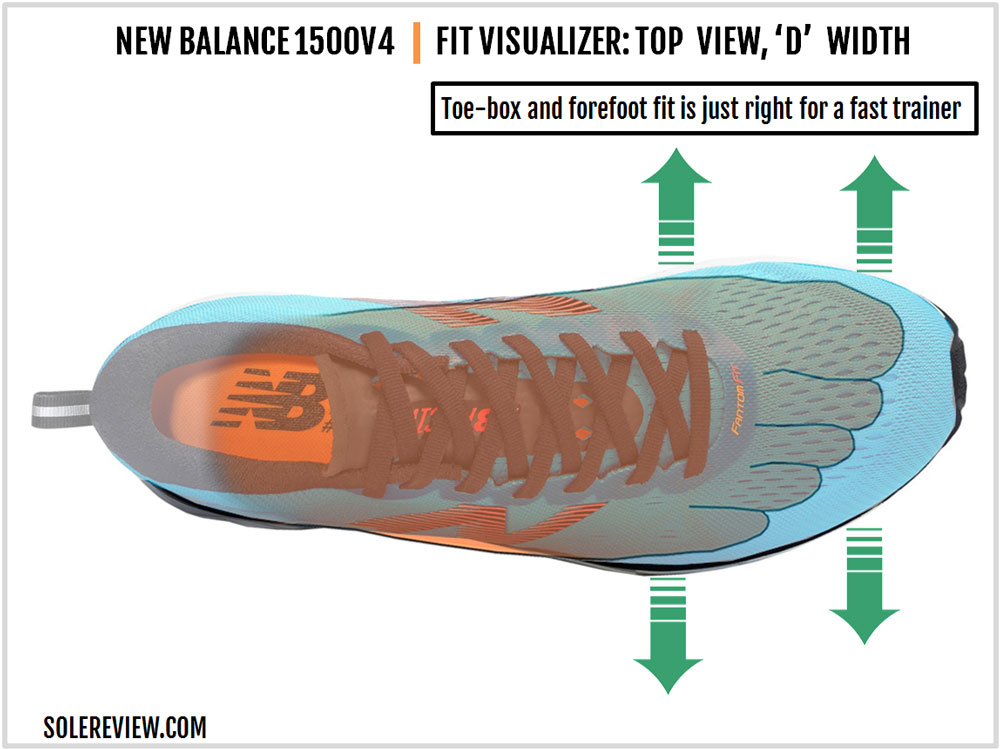 Removing the side overlays and the external toe-bumper changes the V4’s toe-box fit. The toe-box gains some vertical and sideways room. The upside isn’t huge, but runners who’re switching from the V3 and earlier will notice.

Overall, the upper has a supportive fit. The external overlays have been substituted with internal ones, so the upper continues to provide satisfactory lock-down levels.

The tongue is held down by a gusset to prevent sliding. The heel grip is provided by an internal counter covered with foam and fabric padding. 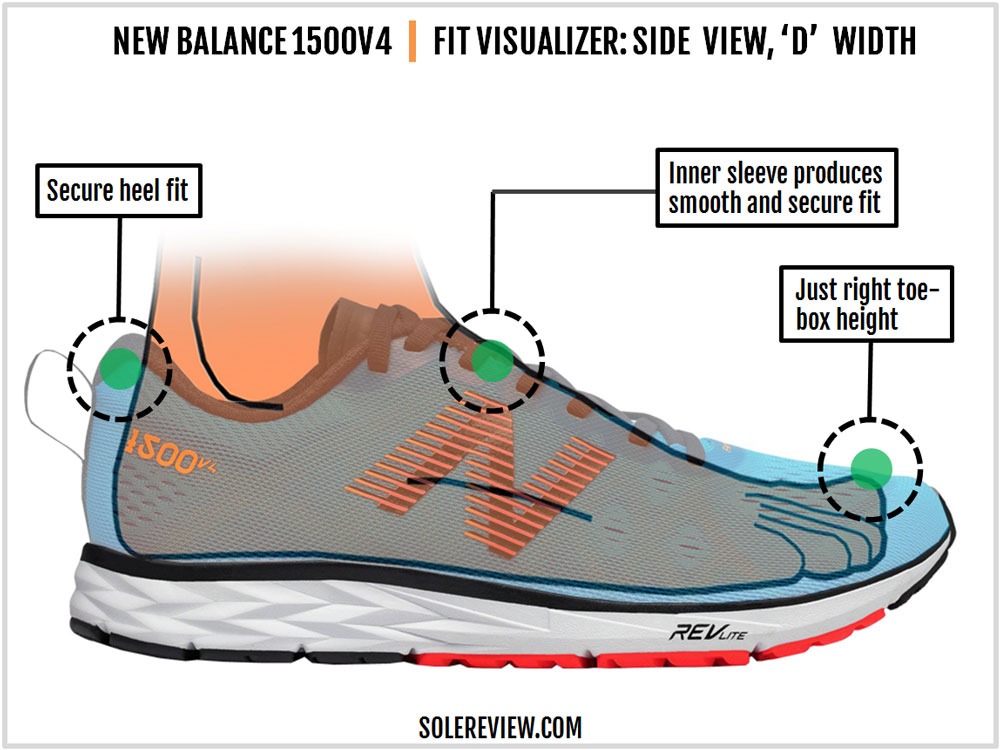 We like what New Balance has done with the 1500 V4’s tongue. The flap is now raw edged with soft synthetic suede instead of using binding like the V3. The V3’s flap had the tendency to curl inwards and take some time to break-in; the new design takes care of those minor issues. Breathability is more or less unchanged over last year.

That sums up the V4’s upper fit. If there’s one thing we miss in the v4, that would be the amount of reflectivity. The V3 had copious amounts of shiny bits; that is conspicuous by its absence on the V4. 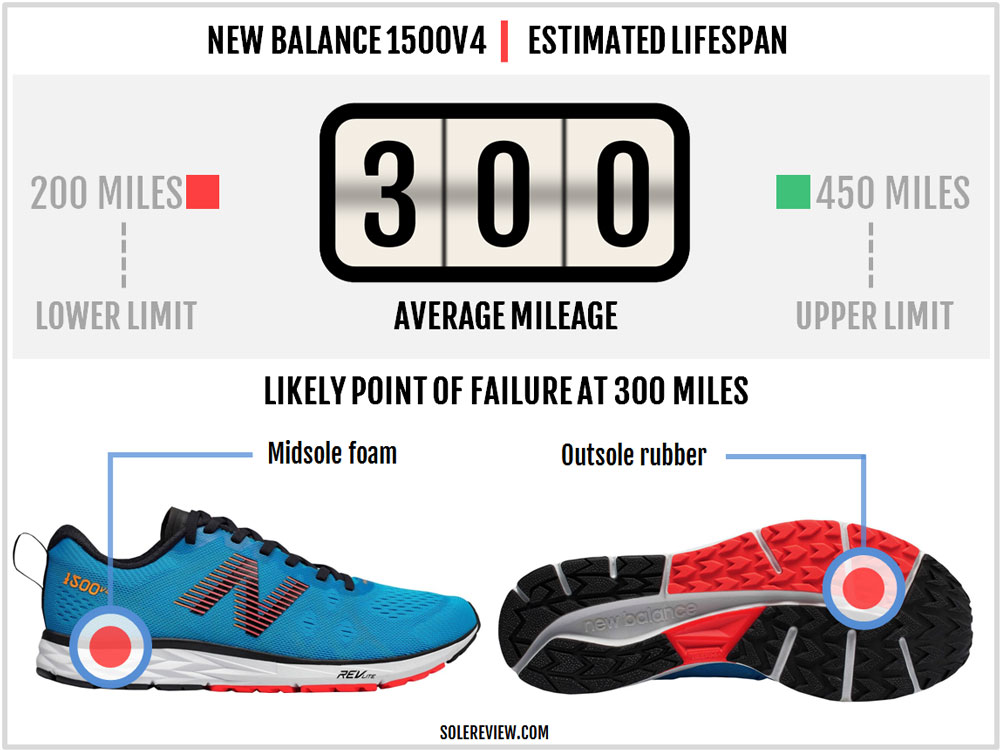 You have to keep in mind that the 1500V4 is a lightweight trainer/racer, so its durability levels will be lower than regular trainers. The 1500 should last around 300 miles, with most of the wear and tear happening to its outsole and midsole foam.

As pointed out earlier in this review, the eventual compression of the midsole foam will make the medial post more noticeable. But that’s not something you need to worry about in the early stages of ownership. 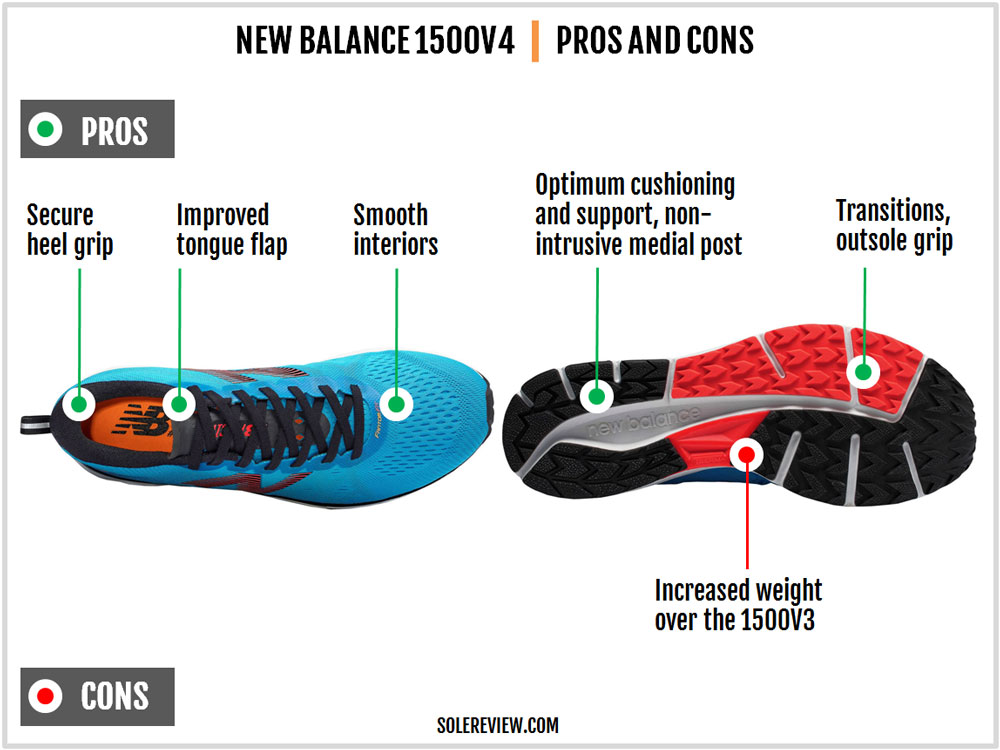 All the good things which were true for the previous versions of the 1500 applies to the V4 too.

The firm, supportive, and low-profile midsole makes fast training runs a breeze. Its sub 9-ounce weight helps it disappear during runs, and the hard medial post is barely noticeable.

The upper fits smooth and secure; the gusset keeps the tongue from sliding. We like the improved tongue design which befits its race-day orientation. 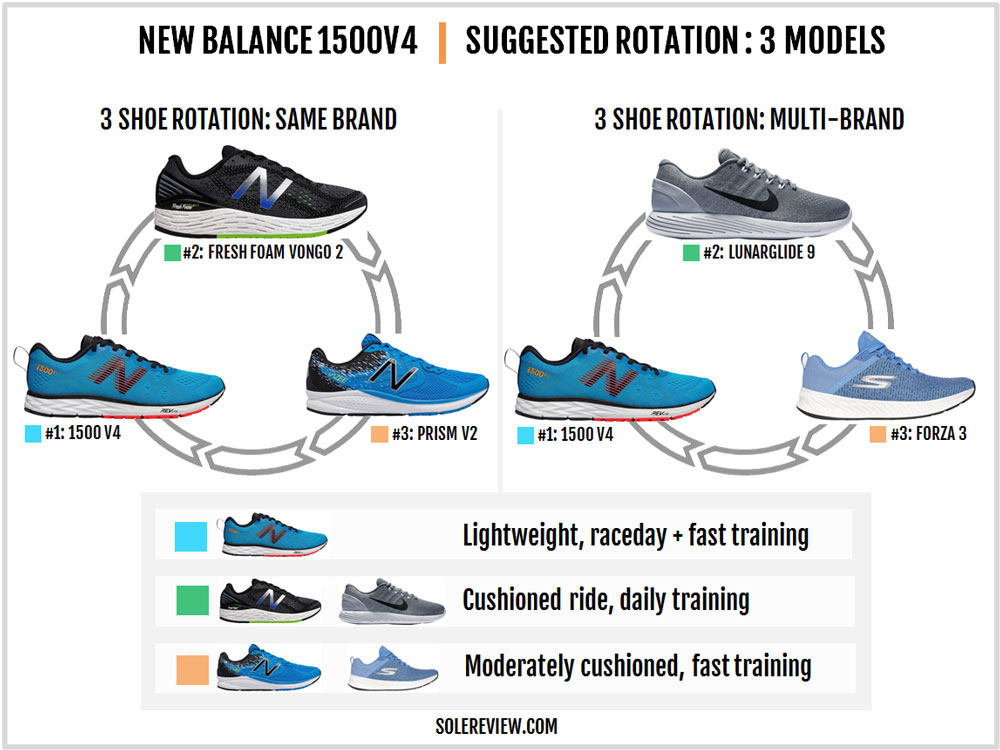 In the 1500V4’s case, a two-shoe rotation should suffice. Get the New Balance Fresh Foam Vongo 2 or the Nike Lunarglide 9 for regular trainer levels of cushioning.

And if you need a ‘bridge’ shoe between the 1500 and cushioned trainers, the New Balance Vazee Prism and the Skechers GoRun Forza 3 are excellent candidates. 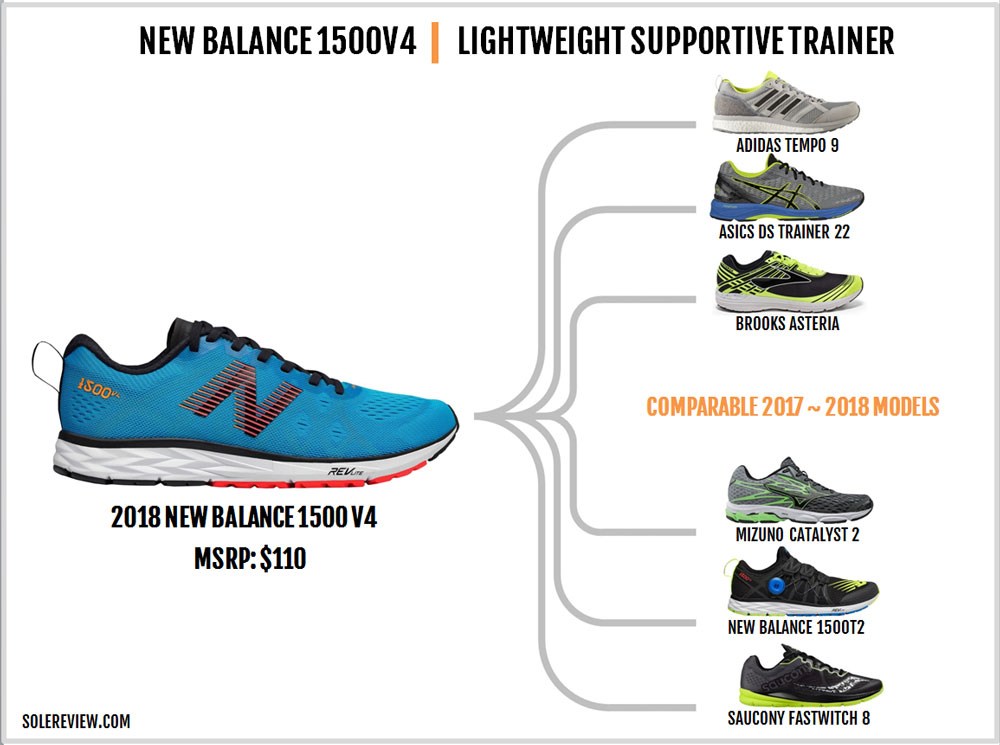 The Boa version of the 1500 is the closest thing to the stock 1500V4. The 1500T2 has an identical sole unit which translates into the same ride experience. The T2 has an enhanced upper lock-down because of the Boa lacing.

The Saucony Fastwitch 8 comes a close second. Its race silhouette coupled with a mild-support midsole compares with the 1500. The Brooks Asteria is also in the same running shoe category.

The adidas Adizero Tempo 9, the Asics DS Trainer 22, and the Mizuno Wave Catalyst 2 are also light-support trainers with a slightly higher level of cushioning. So while these shoes do not directly compete with the 1500, they’re in the same neighborhood.