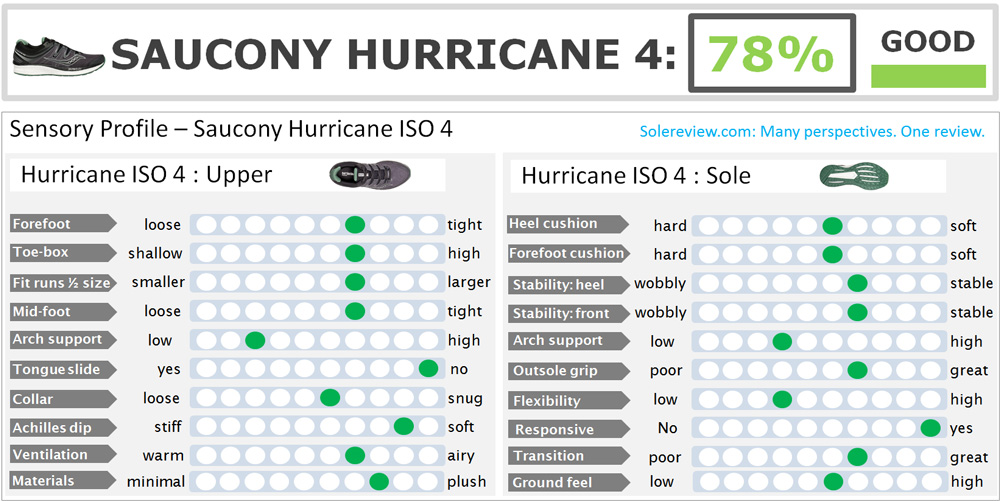 Saucony’s marketing pitch: Stiffness is no longer the price to pay for support in a stability running shoe.

The Hurricane ISO 4 gets a full-length Everun midsole. This translates into a more responsive ride along with an increased bias towards the lateral side. As for the redesigned upper, it's a case of win some, lose some.
Cushioned and responsive ride, forefoot transitions, plush upper materials
Reduced reflectivity, the upper feels stuffy, price 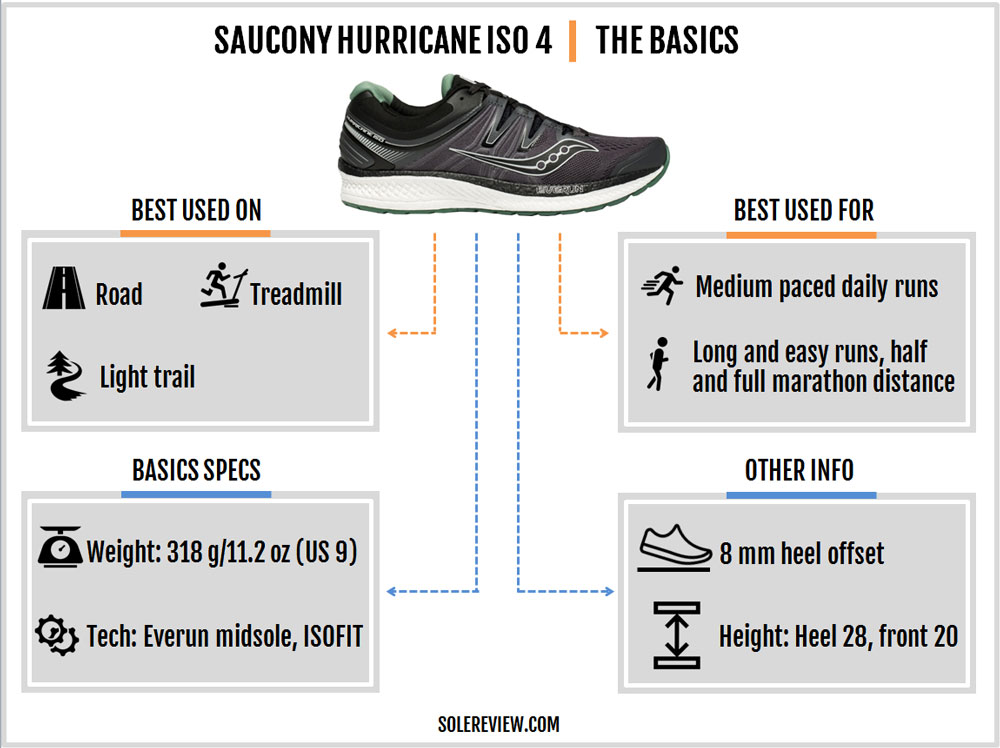 Running shoes are complex products which are often difficult to get right. What works for one shoe might not necessarily suit another. The difference between the Saucony Triumph ISO and the Hurricane ISO is a good example.

Recently, Saucony put a full-length Everun midsole on the Triumph ISO 4 along with an updated ISOFIT upper. As the latter’s stability version, the Hurricane ISO 4 followed suit with identical changes.

Saucony’s premium support shoe now has a full-length Everun midsole. And since it’s a stability shoe, there’s a harder foam wedge on the inside.

The upper changes closely resemble that of the Triumph ISO, meaning that there’s an integrated ISOFIT design replacing the external strap. As a result, the Hurricane inherits a similar fit character. Though the midfoot provides a secure grip, the forefoot area feels a bit stuffy due to the tongue flap.

However, the notable change in the ISO 4 (vs. the ISO 3) is the ride quality. The new midsole construction pushes the Hurricane ISO 4 to a motion-control territory rather than true stability.

Now this update can be a good thing or bad, depending on how you like your support shoe. But if you loved the centered ride quality of the Hurricane ISO 3, just know that the ISO 4 is a shoe with a markedly different ride character. 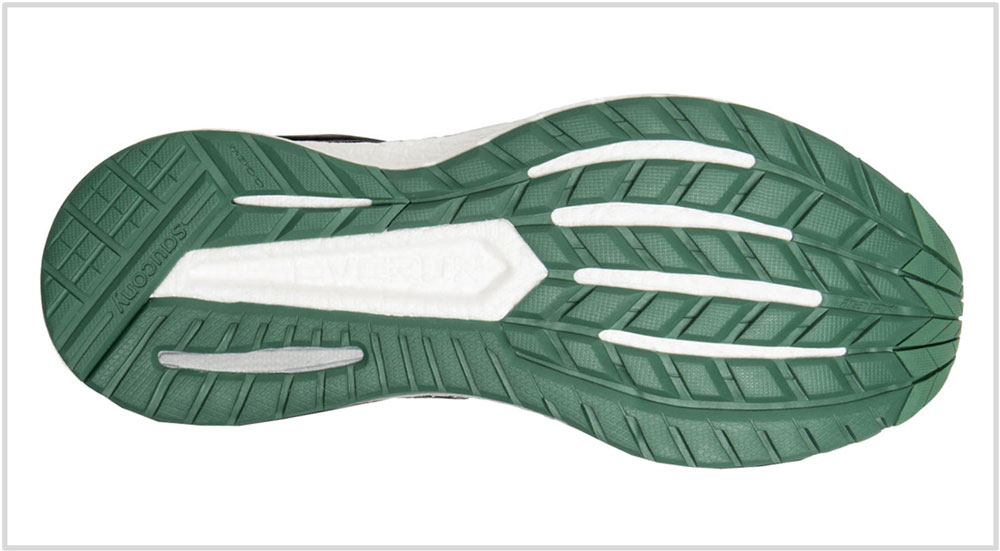 The Hurricane ISO 3 was a stability shoe with a balanced ride. Using an Everun core inside a firmer EVA midsole helped center the weight. There were a couple of other important design features.

The harder medial post curved gradually upwards from the heel towards the midfoot. The EVA midsole also had raised edges which helped increase the sensation of arch support.

Also, the medial post had a margin of EVA foam above it. This kept the harder foam from poking into the arch.

The Hurricane ISO 4’s midsole design has little in common with the ISO 3. Except for the medial post and the removable insole, there’s no EVA foam used. The ISO 4’s midsole also has lower stack heights, trimming 2 mm off the heel and the forefoot.

The new design translates into significant changes in the ride behavior. For starters, the rearfoot doesn’t feel as centered as before. The ISO 3’s softer core helped balance the ride.

In contrast, the full Everun spreads the cushioning more evenly. This comes at the cost of overall stability. The ISO 4 no longer feels as centered as the ISO 3 and this leads to an increased midsole bias. In other words, the difference between the harder medial post and the softer Everun midsole is more noticeable.

And this is what we meant when we said that the ISO 4 acquires a motion-control character. The Everun part of the midsole keeps the weight biased towards the outer side.

That said, the Saucony Hurricane ISO 4 has decent levels of support. It is only when you compare to the previous gen Hurricane that you feel the increased ride bias. 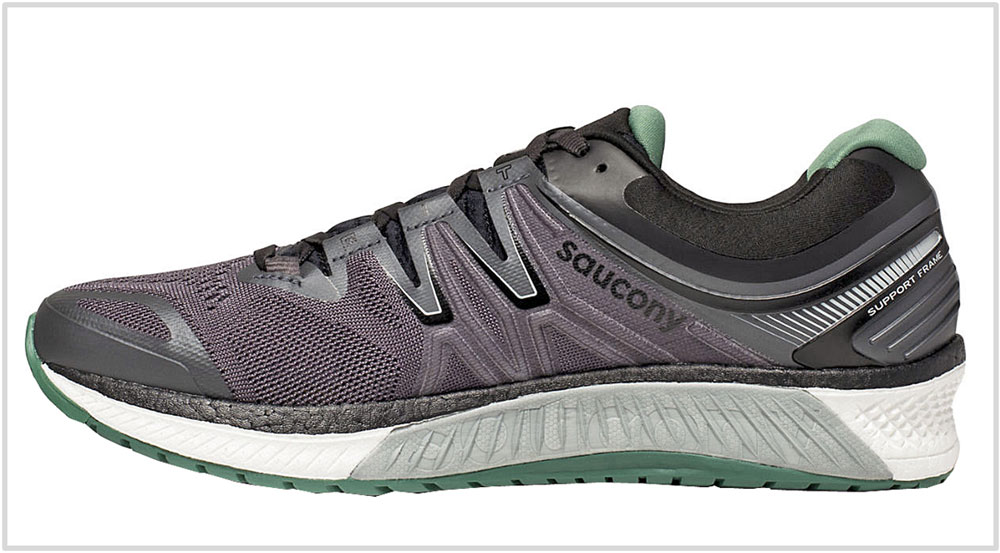 The redesigned medial post affects the ride quality as well. It doesn’t slope gently from the rearfoot. Rather, it’s a large and angled block of hard foam. It also extends closer to the midsole edge. This makes the ISO 4’s medial post more noticeable (under the foot) than the ISO 3.

Some runners like the sensation of under-arch support. The ISO 4 has less of this when compared to the ISO 3, and this happens due to two reasons. The first is due to the lowered midsole sidewall which doesn’t cup the upper as well as the ISO 3.

Now let’s be clear – the ‘arch support’ thing is more of a sensory preference than being functionally relevant. The lack of this sensation isn’t a bad thing – it’s just how some runners prefer it. This update does not negatively affect the Hurricane ISO 4’s score from a functional standpoint.

The second reason behind the feeling of decreased arch support is the new upper. 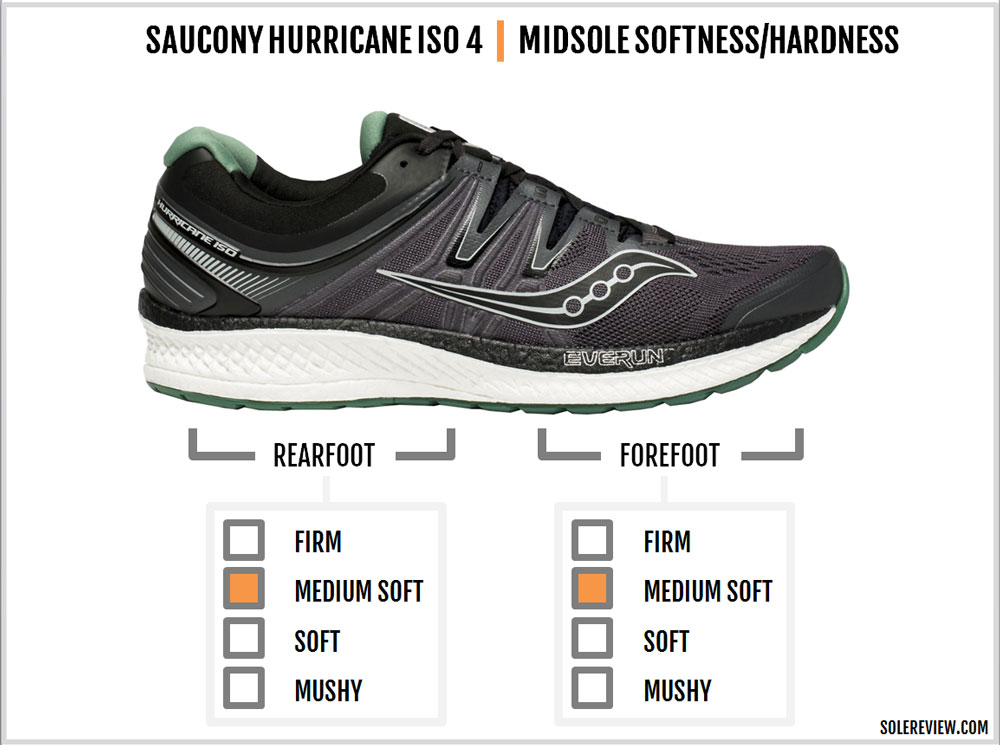 Surprisingly, despite the full-length Everun, the ISO 4 is only marginally softer than the ISO 3. And this has a lot to do with the redesigned outsole. The Hurricane ISO 3’s outsole had a generously articulated geometry. The heel crash pad was a separate piece, and the mid-to-forefoot had a series of flex grooves.

The ISO 4 uses a closed outsole design with no sideways flex grooves. While the outsole is mostly blown rubber with harder pieces near the toe and the heel, the lack of flex grooves leads to decreased splaying during runs. The forefoot is also less flexible than the ISO 3. 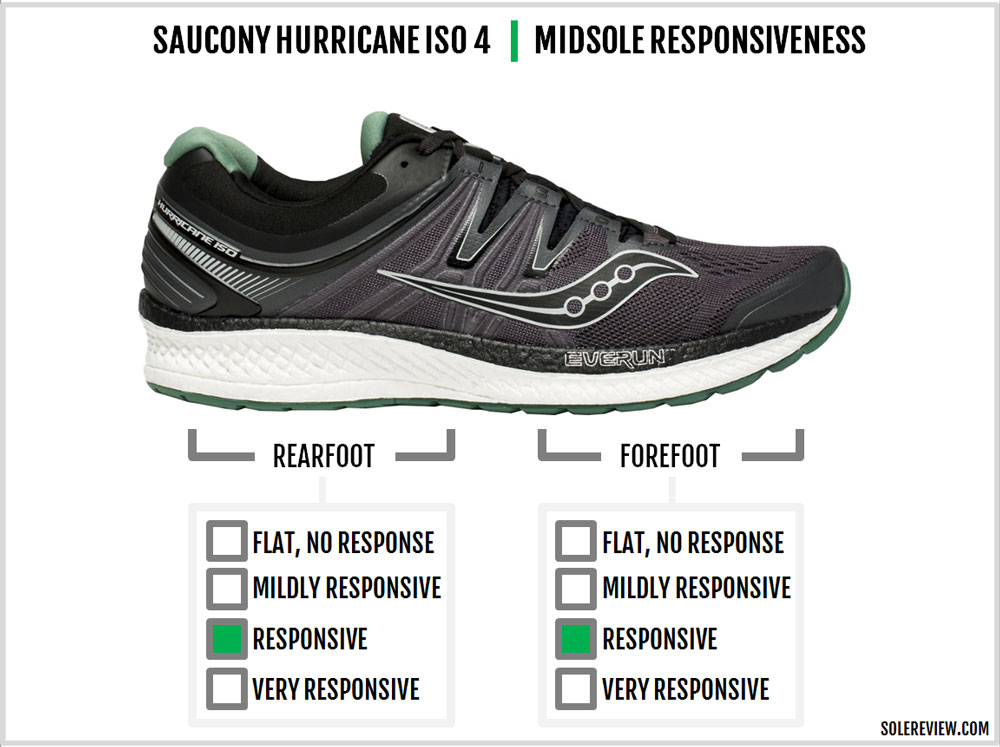 The splaying of the outsole is an important contributor to the cushioning experience, something which the ISO 4 does less of. So while the new midsole certainly possesses a greater level of responsiveness or rebound, the increase in softness isn’t as apparent.

As a result, the Hurricane ISO feels faster than the previous model. Forefoot transitions are quicker due to the firmness and the lower stack heights. Rolls-offs are more efficient due to the stiffer forefoot.

Opinions will be divided on the updated ride quality. Some runners like ‘stability’ shoes with a medially-biased ride, and this has more to do with historical preferences.

Until a few years ago, most stability shoes were synonymous with a ‘motion-control’ character, the kind which demarcated the rearfoot into firm and soft zones.

Contemporary stability shoes may or may not have an in-your-face medial-post, with more focus on a balanced ride character. The Hurricane ISO 3 fit into the latter category. The Hurricane ISO 4 does not, as it leans towards the motion-control territory.

And what is solereview’s stand on this? We prefer the centered ride of the ISO 3 vs. the laterally biased ride of the ISO 4. That said, both shoes target a similar consumer group who seek cushioned trainers with a medial-post. Regardless of which shoe you buy, both have ample cushioning for daily training and longer distance runs.

Due to the Everun midsole, the ISO 4 gains 0.3 ounces or 9 grams over the previous model. 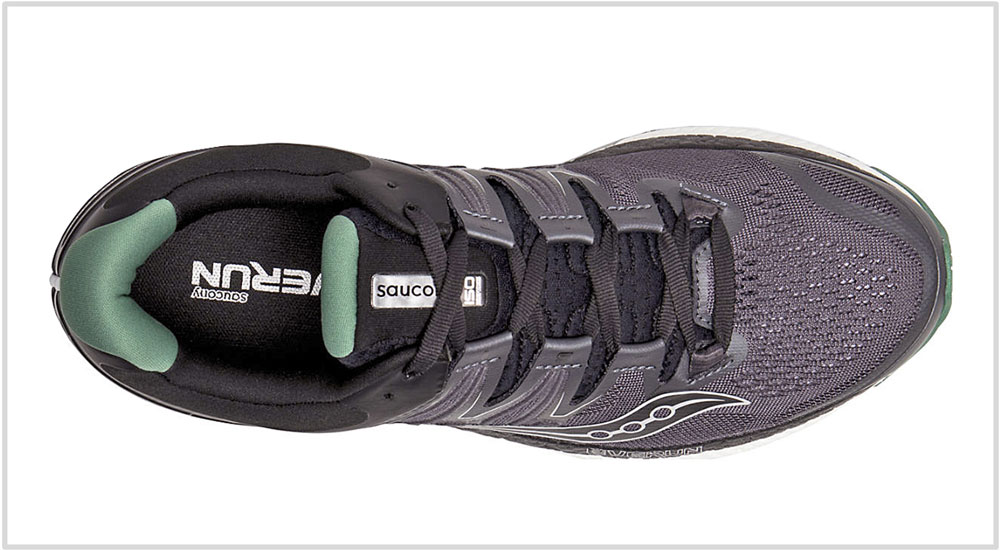 The Hurricane ISO 3 had a synthetic midfoot panel floating over the upper. The ISO 4 integrates the ISOFIT straps into the upper – which is very similar to the Triumph ISO 4 redesign.

And much like the Triumph, the position of the tongue attachment inches closer to the front. This update results into a unnecessary stack of materials under the forefoot, so the insides feel stuffy and narrower than the ISO 3. The previous Hurricane had a cleaner tongue attachment which kept the insides smooth. 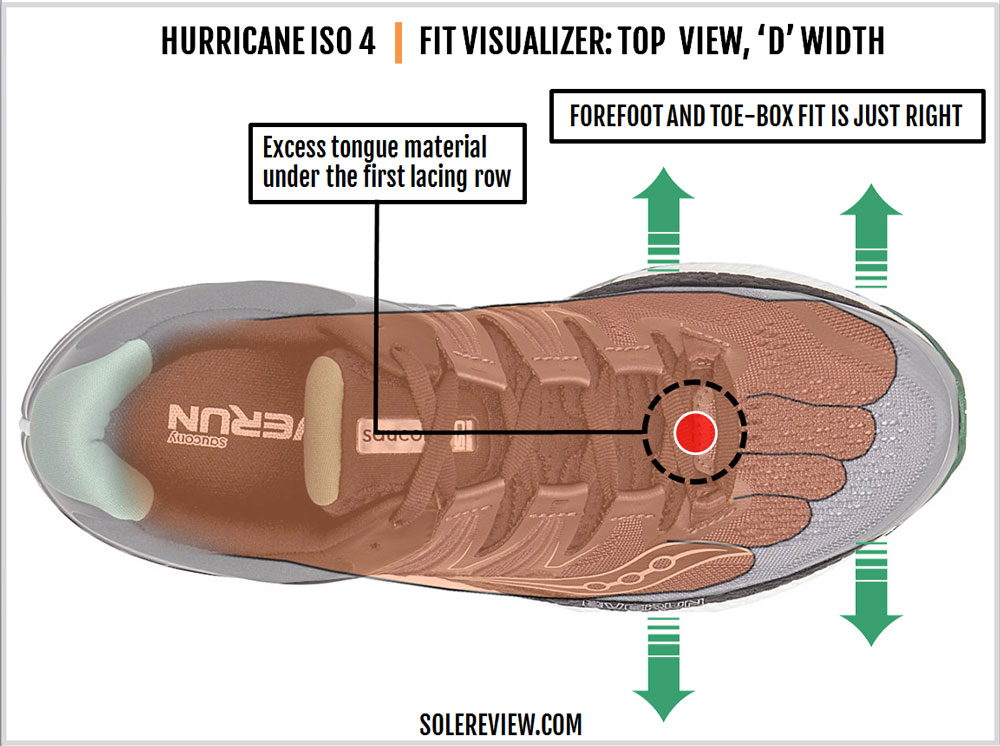 The updated tongue construction could have been better. Otherwise, the tongue is plush due to the generous foam quilting. There’s an internal gusset, so the tongue stays in place during runs.

Due to the new ISOFIT structure, the midfoot doesn’t wrap around the arch as well as it did on the ISO 3. Having an independent, two-strap ISOFIT panel helped hug the arch part better. That is something you don’t have on the ISO 4.

So if the sense of a pronounced ‘arch support’ is one of your deciding factors, then you’re better off with the Hurricane 3.

There’s ample toe-box room. The bumper is shorter than before so there’s enough sideways space. There’s a new ‘canopy’ on top which is an extension of the bumper, but it doesn’t get in the way of toe-box height. Length-wise, the Hurricane ISO 4 fits true to size and is available in two widths.

It’s amazing how many (common) quirks the Hurricane shares with the neutral Triumph. The Hurricane’s heel is molded wider, and this loosens the fit a little. The external plastic counter doesn’t extend long on the sides as the ISO 3. Instead, there’s a smaller clip over the heel.

As a result, the heel splays wider and the ISO 4 lacks the secure hold of the ISO 3. The heel doesn’t slip during runs, but the difference is felt. 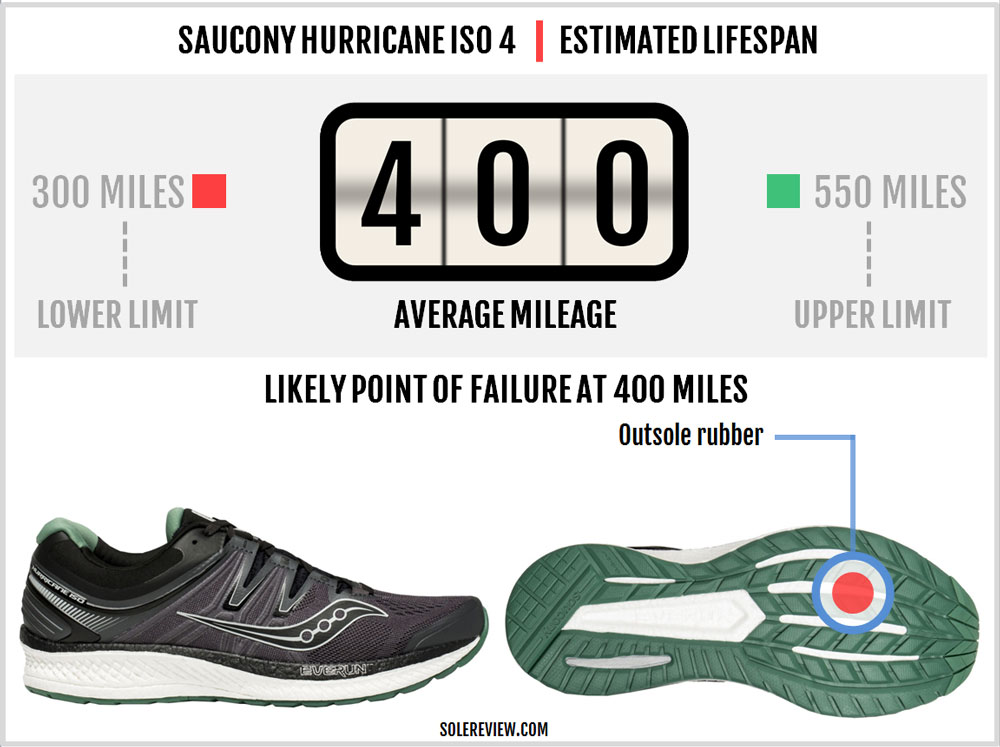 The Hurricane ISO 4 should deliver an average mileage of 400 miles. This is slightly higher than the ISO 3 on the account of the more durable Everun midsole.

The new outsole design with fewer flex grooves also appears to be less susceptible to localized wear and tear. We haven’t come across complaints on the upper lifespan of past Hurricane models. Considering that the ISO 4 uses similar material specs, we foresee no concerns. 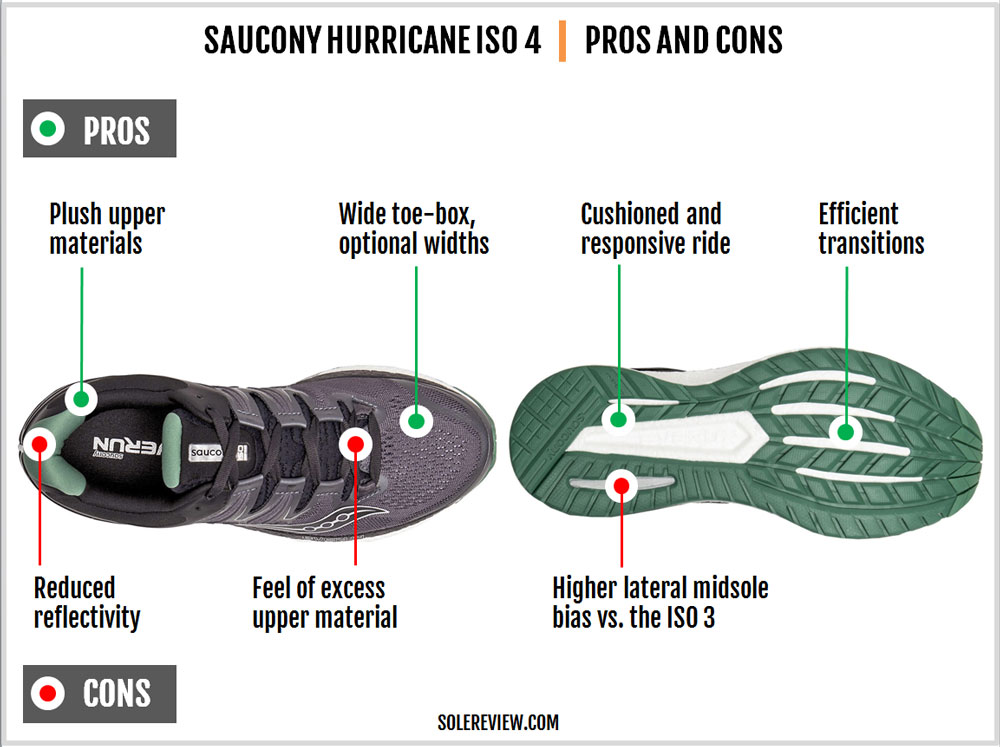 There are certain benefits which are a part of a full-length Everun midsole. Increased responsiveness and a denser quality of cushioning are two of them. The Hurricane ISO 4 has a responsive and cushioned ride along with smooth transitions.

The ISO 4 isn’t as supportive as the 3; we called out the higher level of outwards ride bias in the review. The upper fit also needs some reworking; the front end of the tongue ends up feeling bunchy inside. The heel grip could do with an improvement or two.

Other minor negatives would be the reduction in reflectivity, the $5.00 price increase over the ISO 3, and the crude midsole paint over the Everun midsole. 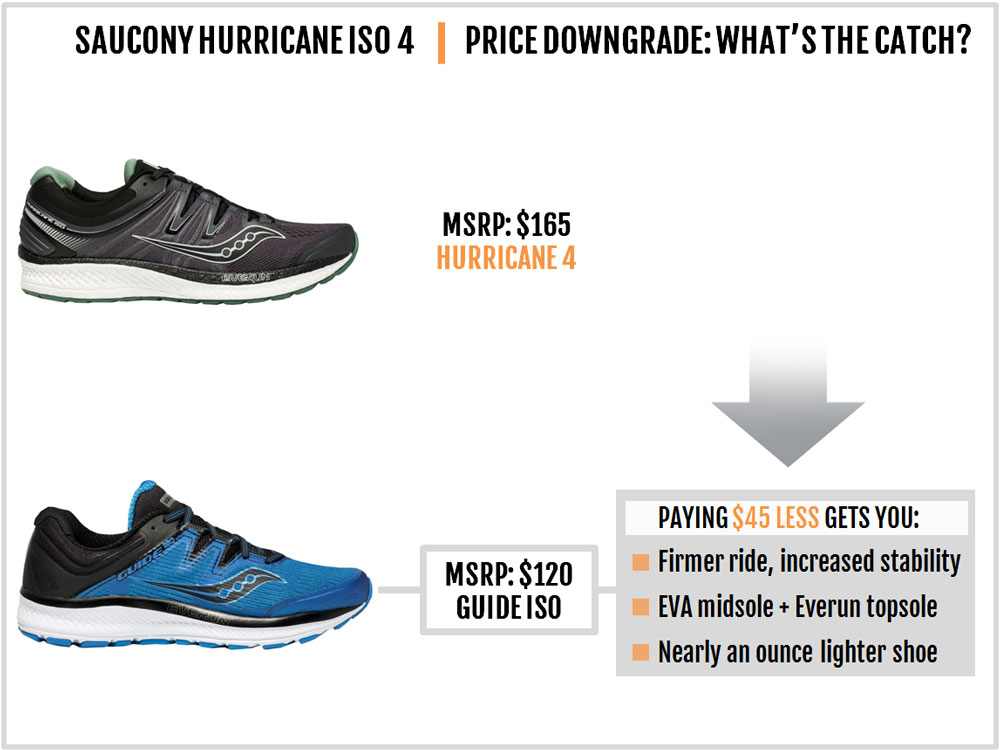 If you need a Saucony which is faster, cheaper, lighter, and more supportive, then the Guide ISO will help save you some money. 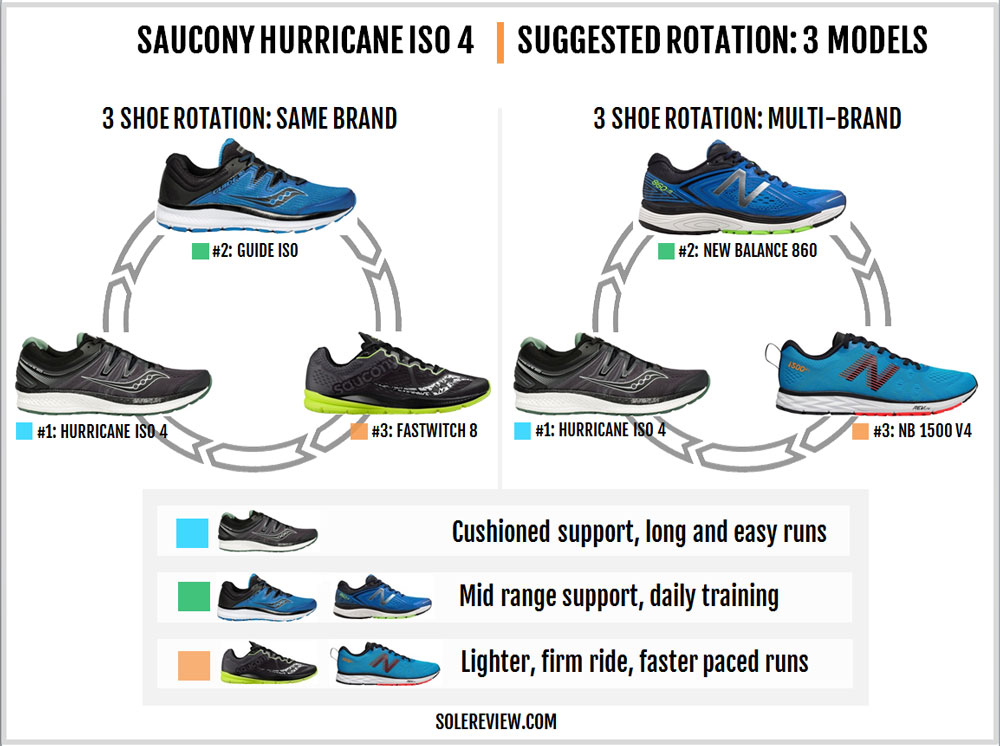 If you want a diverse assortment of three Saucony shoes, then the Hurricane, Guide, and the Fastwitch complement each other well.

The Guide is the perfect in-between the cushioned Hurricane and the sleek Fastwitch. For short races and fast track workouts, the Fastwitch 8 is the go-to Saucony shoe.

Outside Saucony, the Nike Structure 21 and the New Balance 1500V4 can substitute the Guide ISO and the Fastwitch, respectively. 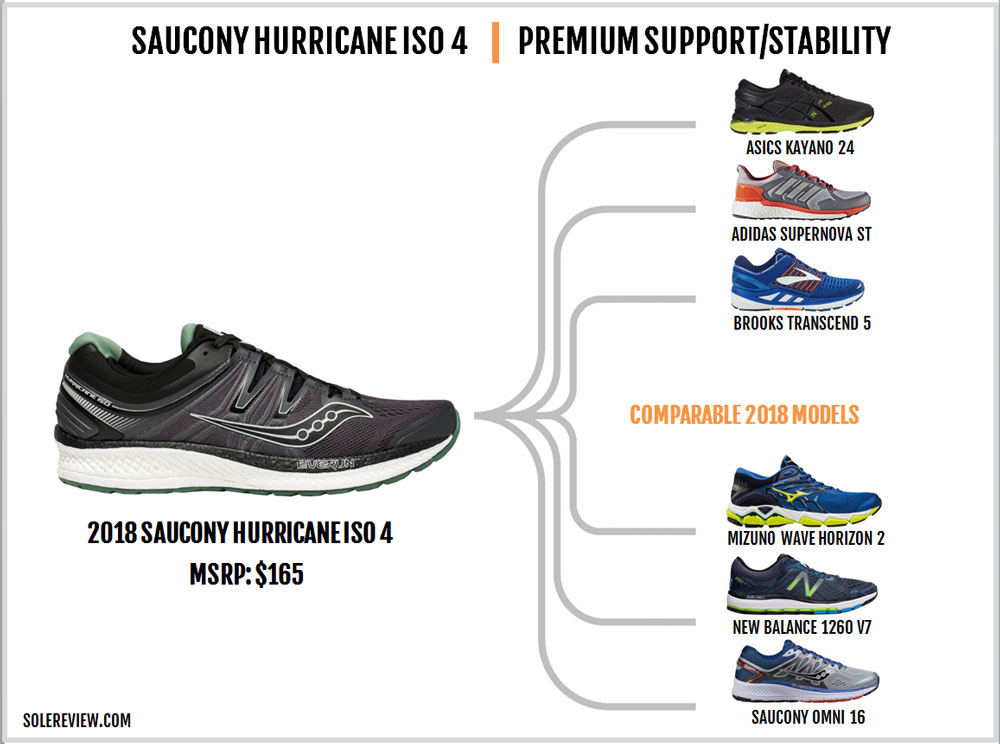 If your mind isn’t set on the Hurricane ISO 4, then it’s worth exploring available options. The last year’s Hurricane ISO 3 is a shoe you should consider. Though it lacks a full-length Everun midsole, the ride is more supportive with a less intrusive medial post and a better upper fit to go with it.

The Saucony Omni 16 is a good stability shoe with a wide outsole footprint. The Asics Kayano 24 and the New Balance 1260V7 are also your options if you’re looking for cushioned trainers with a medial post.

If you’re craving for an arch hugging shoe, then look no further than the Brooks Transcend 5. Its high midsole edges help cup the foot and the wide outsole is cushioned yet planted. The Mizuno Wave Horizon 2 is another stability shoe which does not use a conventional medial post.

The adidas Supernova ST is the least supportive on the list but has the softest ride.