Outsole: Strategically placed rubber lugs under the heel and forefoot. 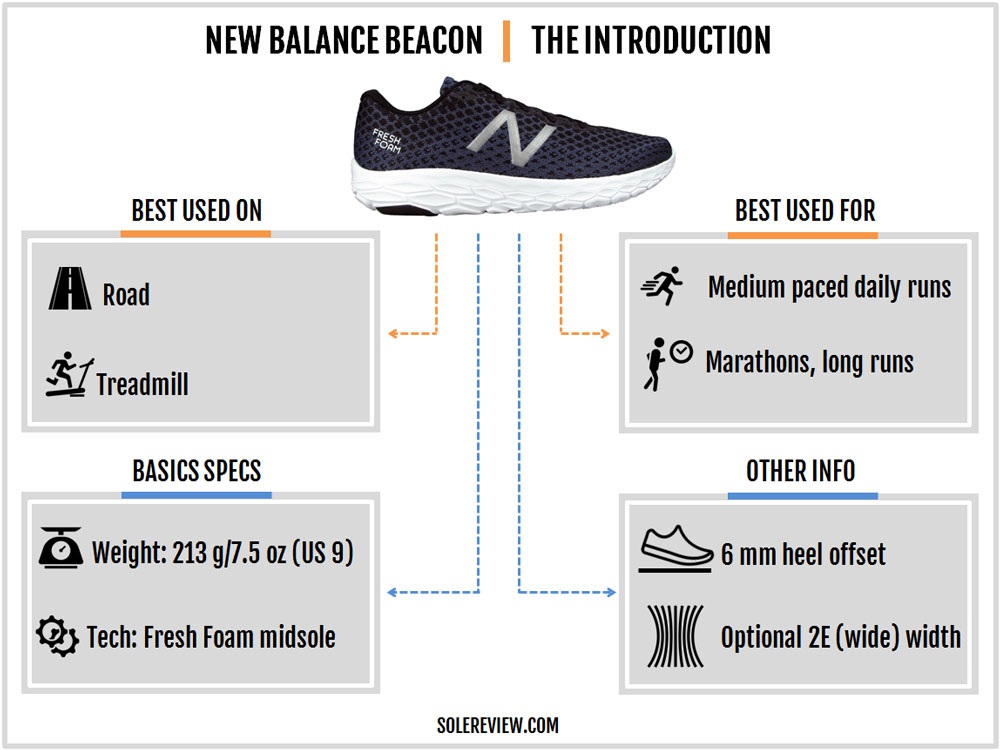 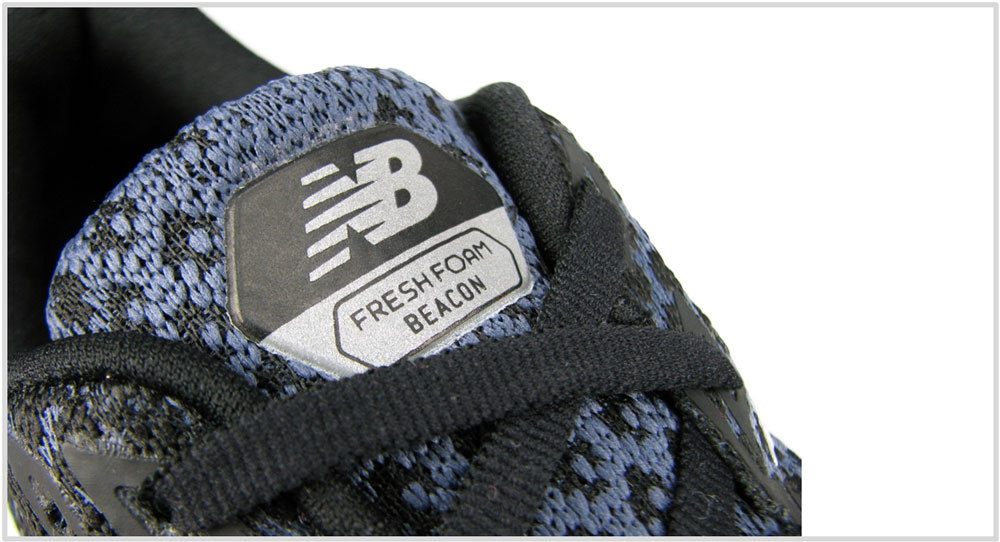 Running shoe midsoles are produced in two different ways. Well, at least most of them.

There’s the compression-molded version and then there’re injection-molded EVA midsole variants. The compressed kind has higher resiliency and denser cushioning. This solereview article covers the subject in detail.

As a general rule, injected midsoles – such as the one used on the Fresh Foam Beacon – are lighter and cheaper to produce. These foams are cushioned but in a flattish kind of a way; they lack the dense feel of compression molded soles.

Our first run in the Beacon felt very familiar; it was almost as if we’d run in the shoe a couple of years ago. And no, it wasn’t even a New Balance shoe.

To be specific, it was the Skechers GoRun Ride 6. It had a lightweight build coupled with a cushioned yet efficient ride. Like the Beacon, it had an injected midsole with similar ride dynamics.

There are two notable differences between the Beacon and the Ride 6. The Beacon’s midsole has a greater stack height so the sense of cushioning is more pronounced than the Ride 6. The density is also firmer so it feels more agile than the Skechers shoe. 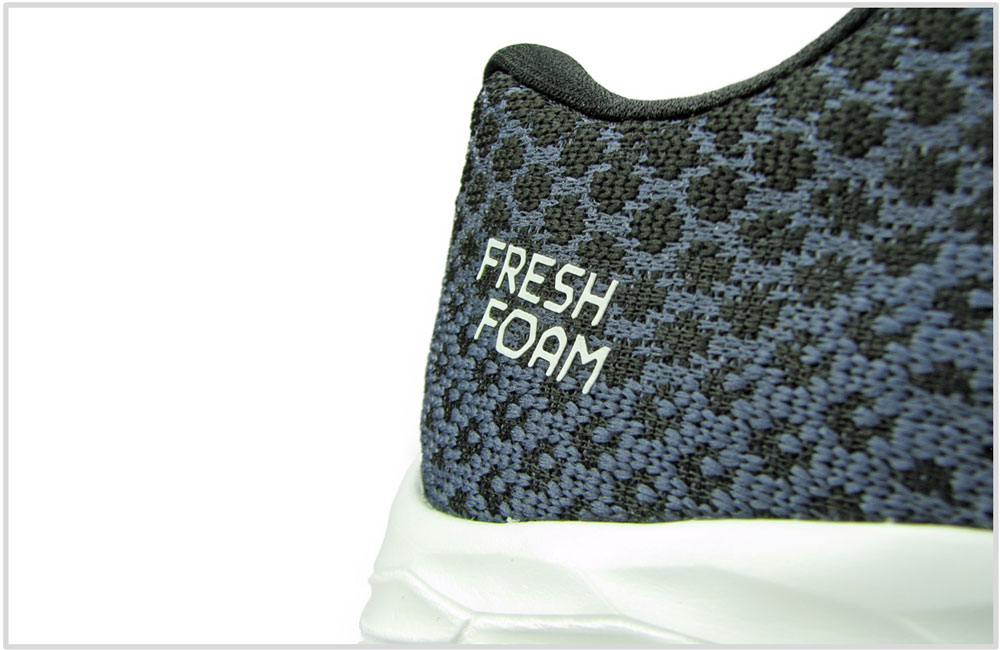 The New Balance Fresh Foam Beacon is also a reincarnated Boracay of sorts. But in this life, it’s got 2 mm higher offset, a softer ride, and carries nearly 30% less weight. The Beacon also fits smaller than the average New Balance shoe.

The Boracay was versatile, and so is the Beacon. The latter’s thick foam stack offers ample damping over hard surfaces and makes it ideal for long-distance runs. At the same time, the midsole doesn’t overly compress so the Beacon works for faster paces too.

The Beacon is over-priced by $20 – there’s very little, material-wise, which justifies the existing price-tag. The Beacon features a nearly all-foam sole composite and there’s not a lot going on its upper.

A $100 MSRP would have been just the right price for the Beacon. 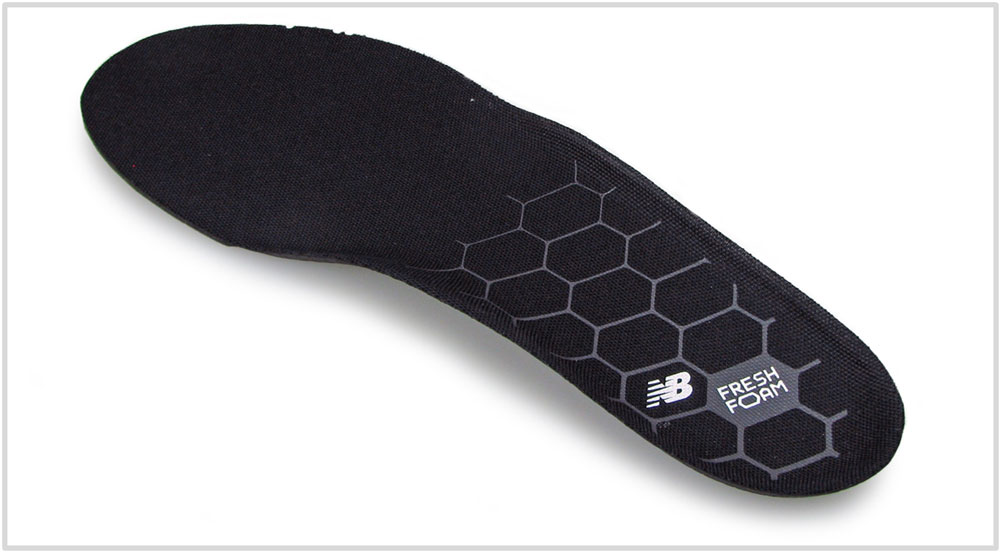 Some say that the Beacon is similar to the Hoka Clifton and the New Balance Zante. We beg to differ; the Beacon has a ride character which is a closer match with the Hoka Hupana and the Boracay.

A lightweight build completely transforms the character and the use-case of any trainer. Once the shoe drops below 9 ounces for a half-pair, its versatility increases three-fold.

And we’re not talking about 6-ounce racing flats here, but running shoes with a high-volume midsole. The Fresh Foam Beacon happens to be one of them. A thick EVA (Fresh Foam) midsole is the primary cushioning agent here, and a removable insole and foam lasting are tossed over it for good measure. 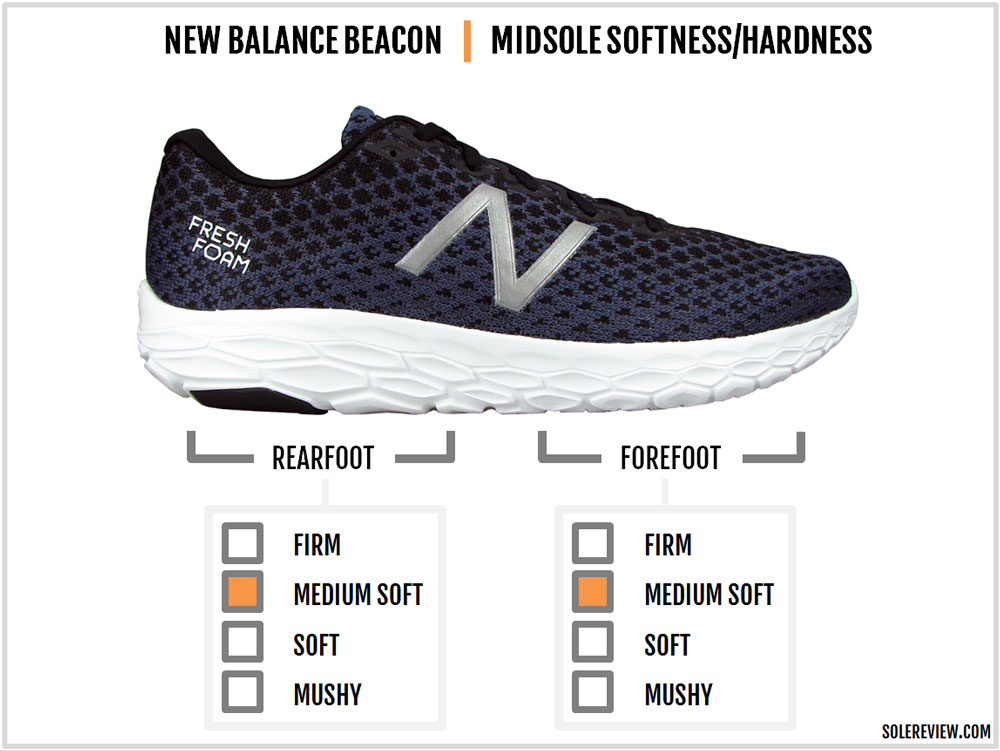 The result is a generously cushioned ride experience. However, the midsole set-up isn’t plush, nor is it very responsive or springy – and that’s typical of injection-molded midsoles. And since the insole isn’t made of open-celled foam, you don’t get the superficial topping of softness either.

There’s a certain flatness in the Beacon’s cushioning character, and that’s what makes it versatile for a wide range of runs. The midsole doesn’t go into a compression overdrive with every foot-strike and transition cycle.

Instead, the Beacon delivers a padded and efficient ride experience which complements runs at faster paces. Its single-density construction makes the loading and push-offs smooth.

Slow runs are also enjoyable. As a matter of fact, the sensation of softness is more noticeable at relaxed speeds. A slower loading translates into longer transition cycles, thus providing the midsole with more time to compress and return to form. At higher paces, the entire process is accelerated – thus delivering the flat cushioning feel. 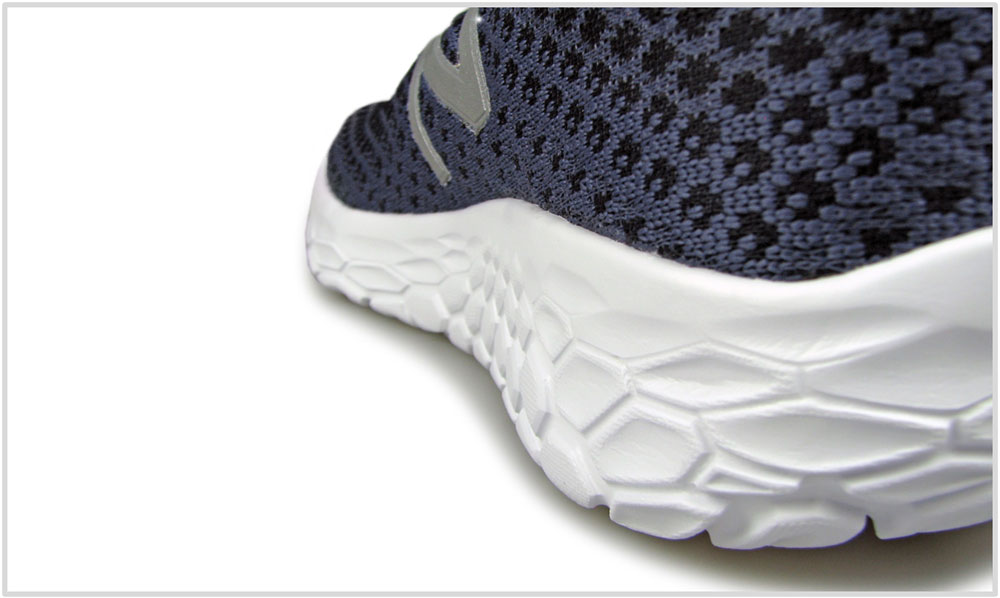 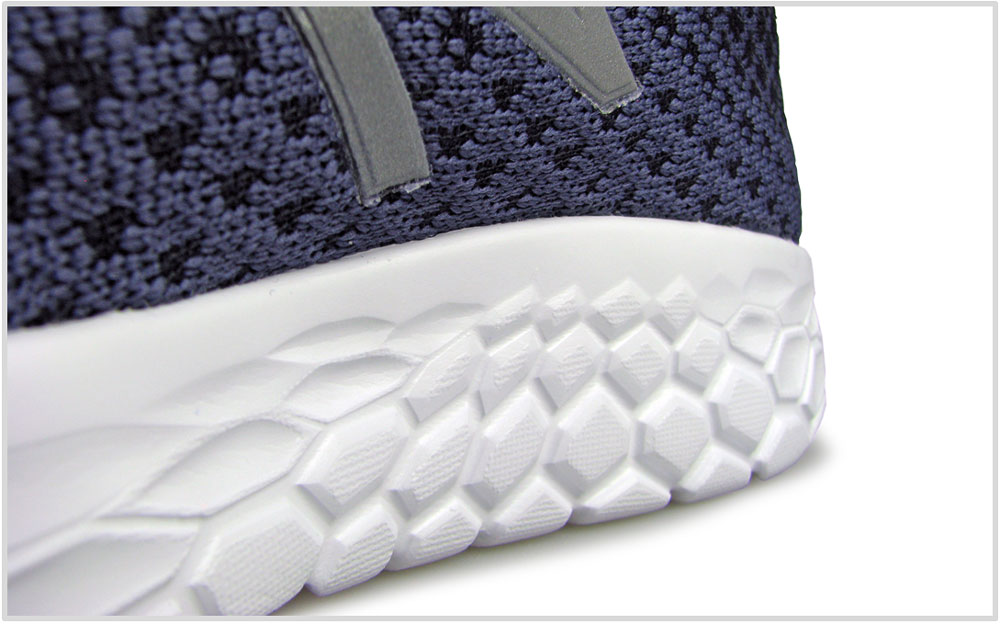 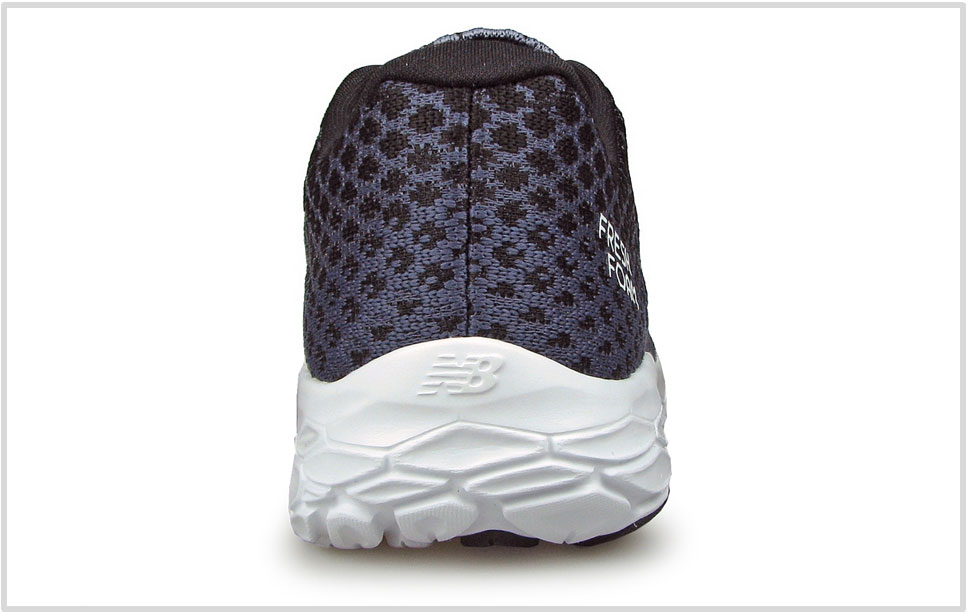 The overall feel is very neutral. The midsole uses different inner and outer sidewall designs but maintains a persona which is supportive and non-biased.

The outer midsole has depressed hexagonal grooves while the inner side has filled-up cavities. Nonetheless, there’s no lateral midsole bias like we’ve seen in softer and lower profile New Balance running shoes.

The upper also sits inside the midsole rearfoot instead of atop it – this design greatly improves the heel stability.

The insole tends to slip over the foam lasting. The sockliner is firm with a smooth underside so there’s very little in the way of grip. Don’t be surprised if the insole moves around during longer runs of 10 + miles.

New Balance should have looked to the Zante V1’s design for inspiration and used a softer and perforated insole for a better internal grip. 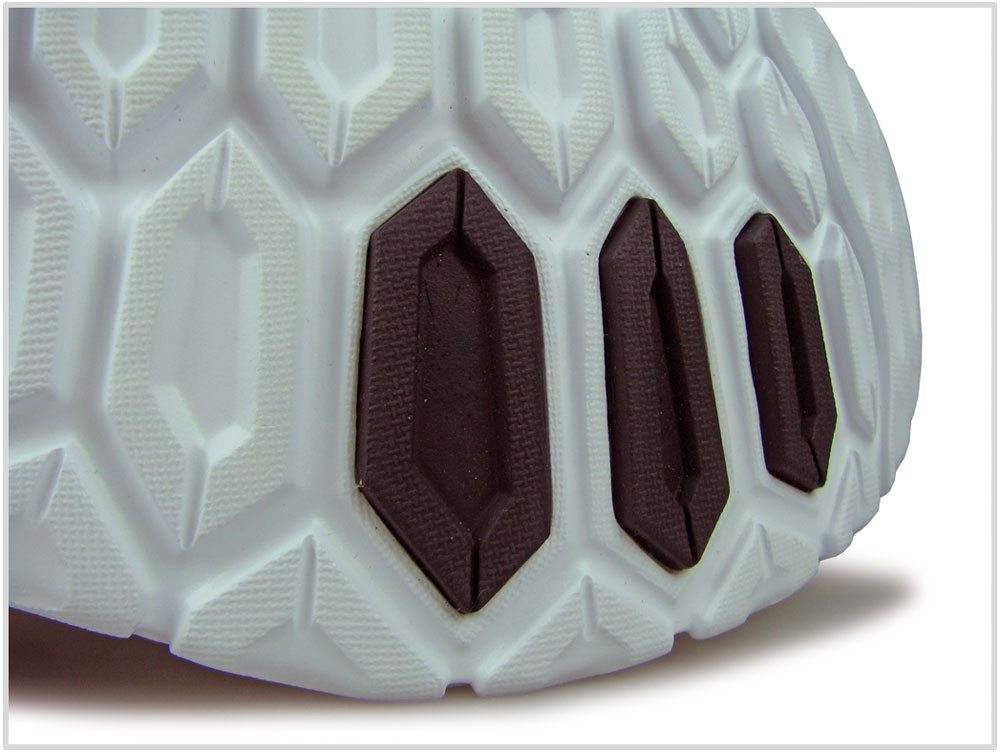 Outsole rubber coverage is scarce. There’s a couple of rearfoot lugs and three more under the forefoot.

Despite the budget implementation of rubber, the pieces are correctly placed over high-wear areas. We emphasize this because sometimes even the biggest shoe brands botch up this seemingly simple task.

If the quality of outsole grip is what you’re concerned about, the Beacon does ok. A nearly all-foam outsole means that running in cold and wet conditions is not advisable.

Even running with a bit of slush on the road isn’t recommended regardless of the weather. Elsewhere, the Beacon’s sole grip does just fine. 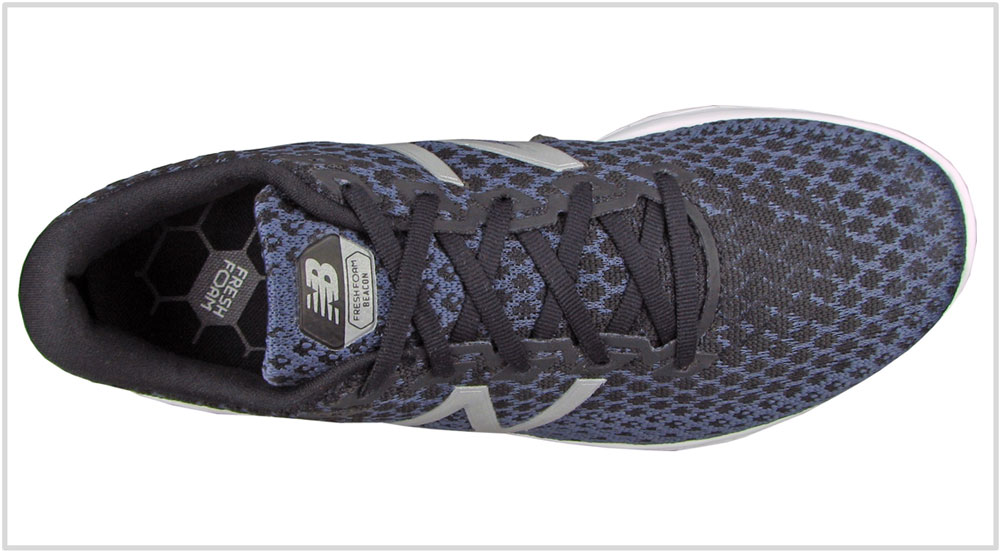 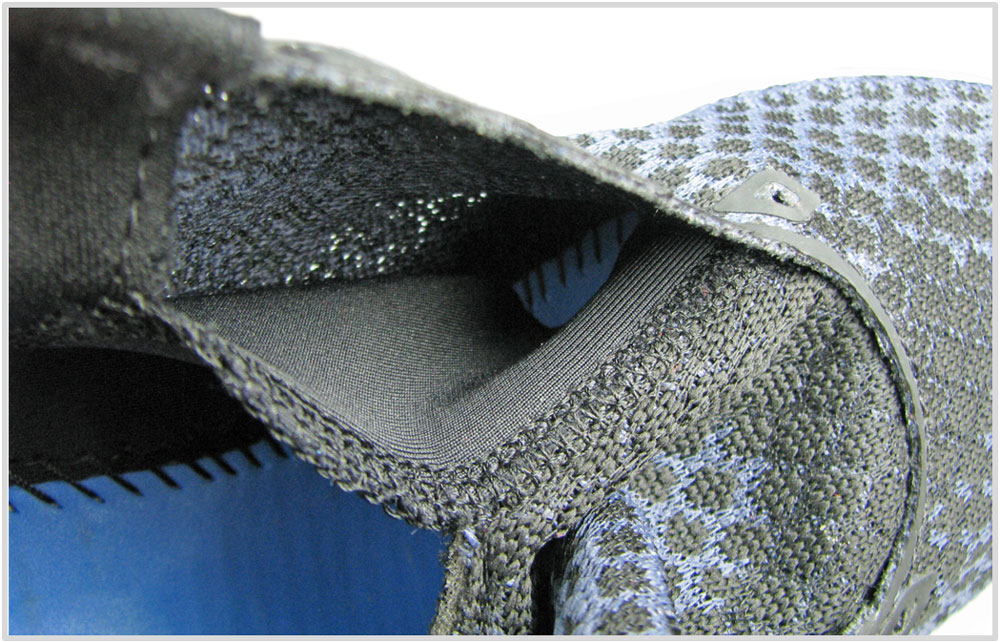 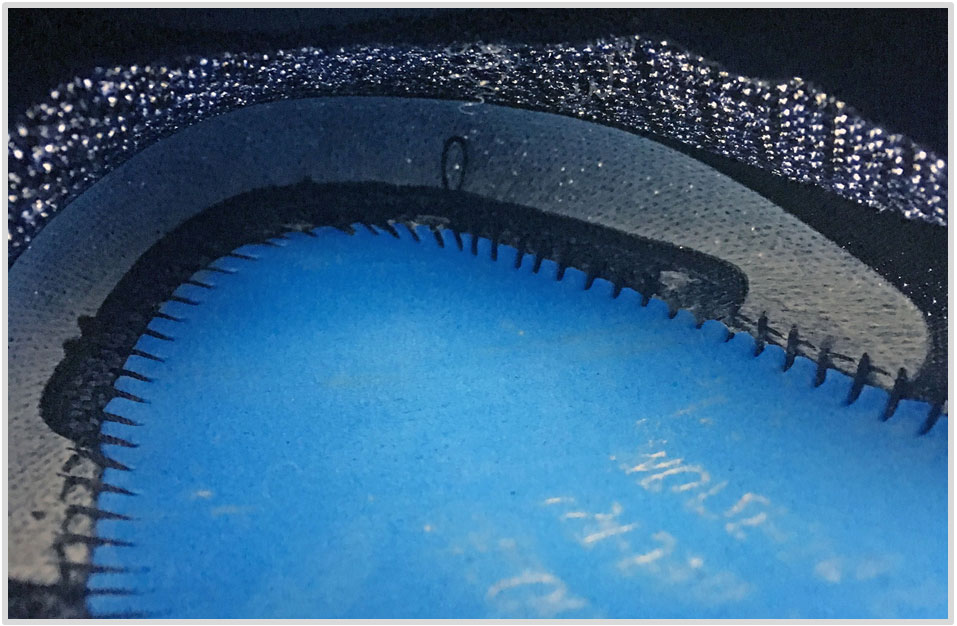 The Beacon’s upper is basic as it gets. A single-piece fabric upper is joined only at the heel. A moderately padded tongue is kept in position by an attached gusset. The forefoot is unlined and un-sleeved except for an underlay (refer to the image above) which gives the toe-box its rounded shape.

Rubberized overlays strengthen the lacing area and also help the laces lie flush with the tongue. Despite the minimally quilted tongue, the top-down lacing pressure is managed very well.

There’re no other overlays except for the reflective logos and the tongue label. The amount of night-time visibility on the Beacon has to be seen to be believed – this is one of the most reflective running shoes you can buy at this price. 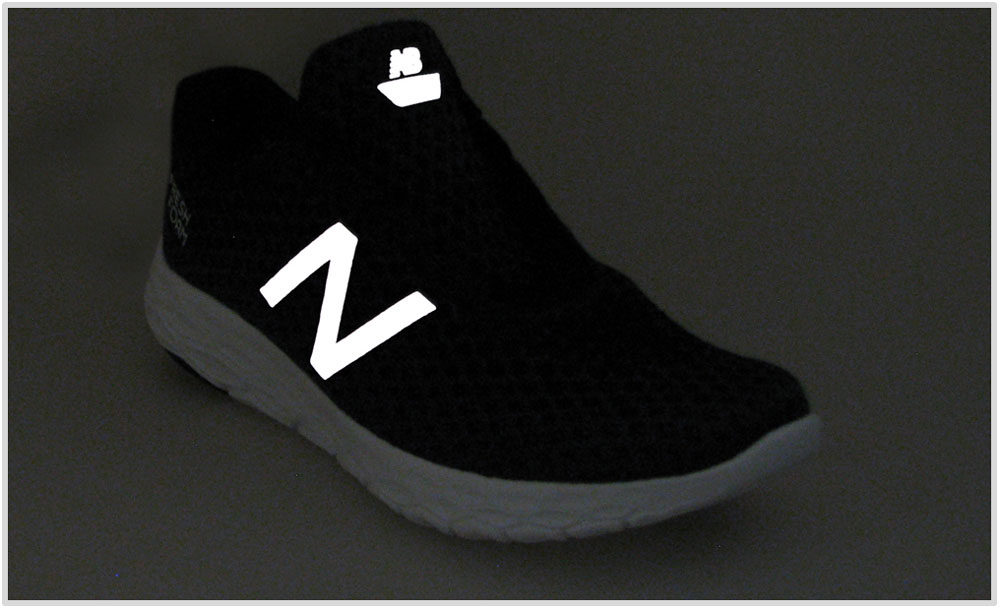 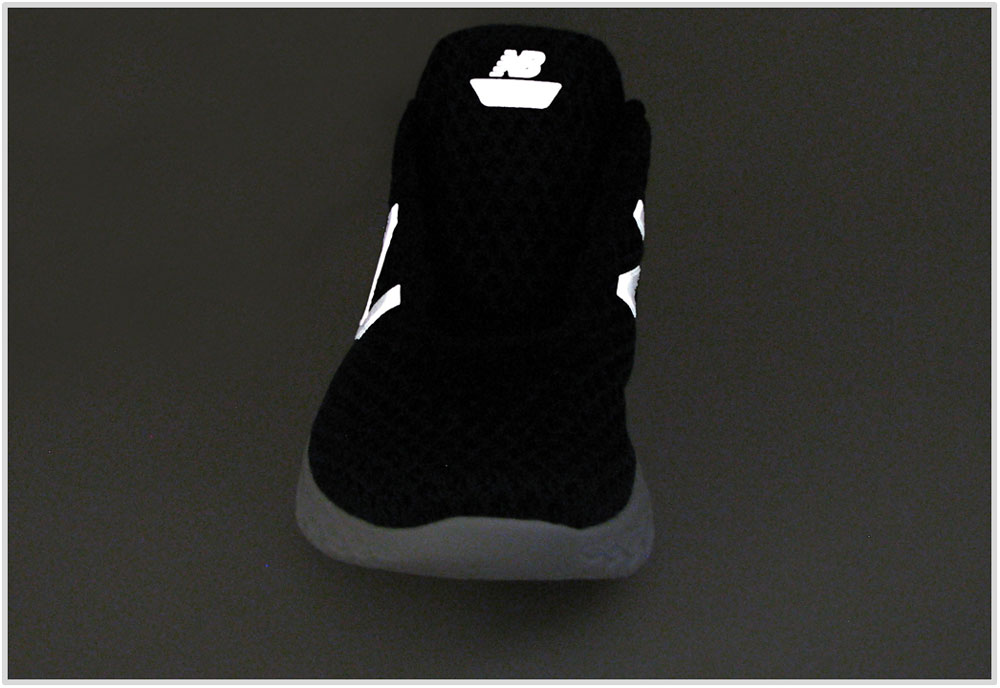 Have a look for yourself – our simulated night-time images demonstrate the Beacon’s high-visibility elements. 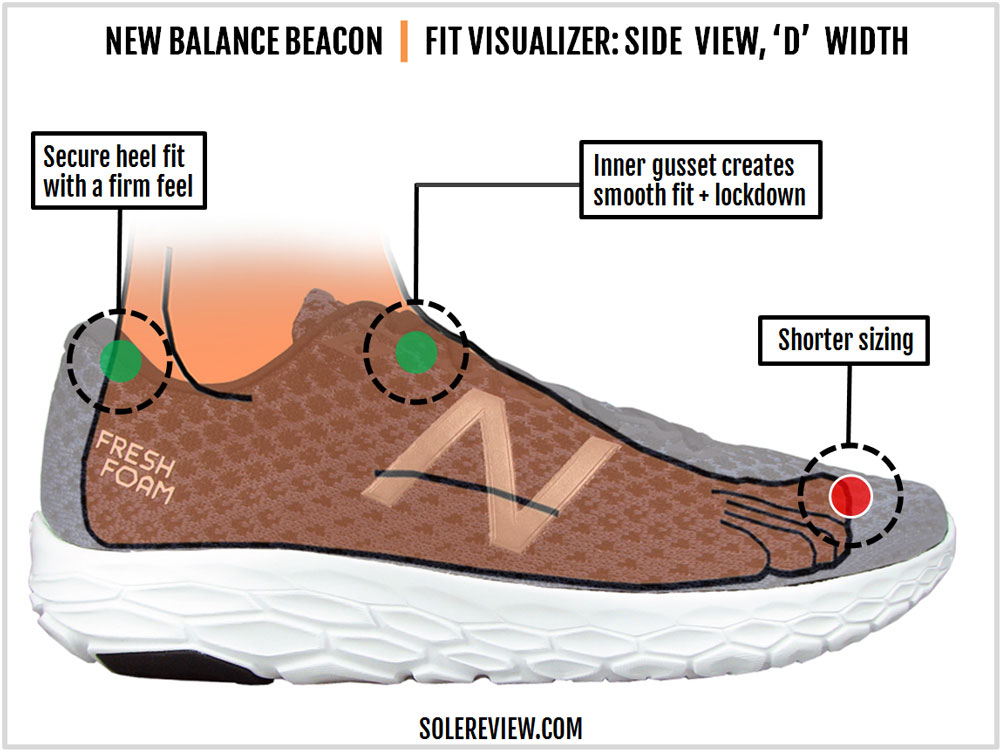 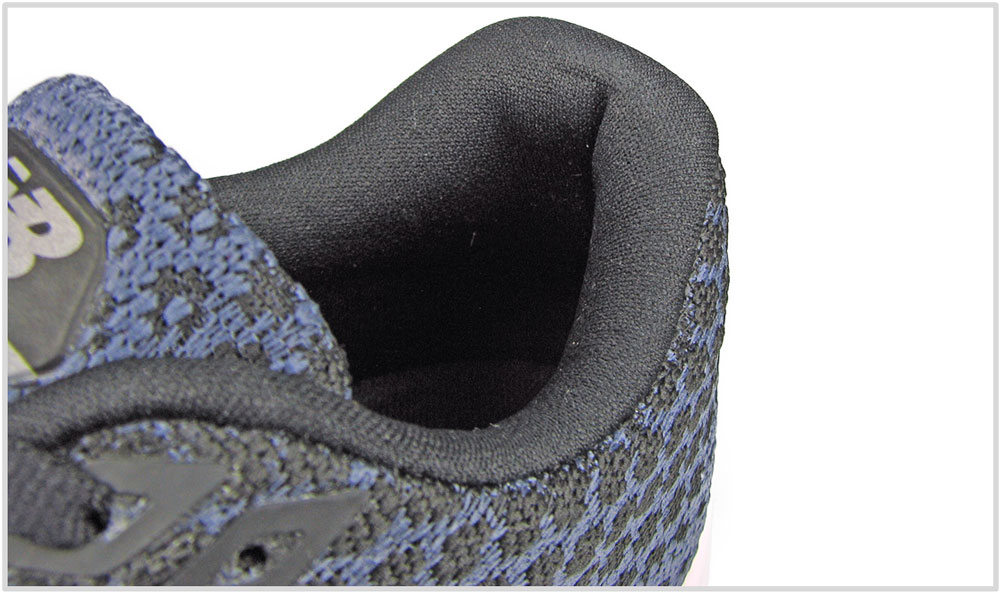 It would have been nice if the Beacon featured a softer and lower internal heel counter. Or a much smaller and pliable kind like the one found on the Zante. With the existing heel counter, the hardness becomes noticeable after 10+ miles.

With the rest of the shoe being so minimal, it would have made sense to tone down the back-part as well. The heel rigidity is the likely reason why the Beacon fits slightly short.

In some cases, buying a half size larger will prove more comfortable. 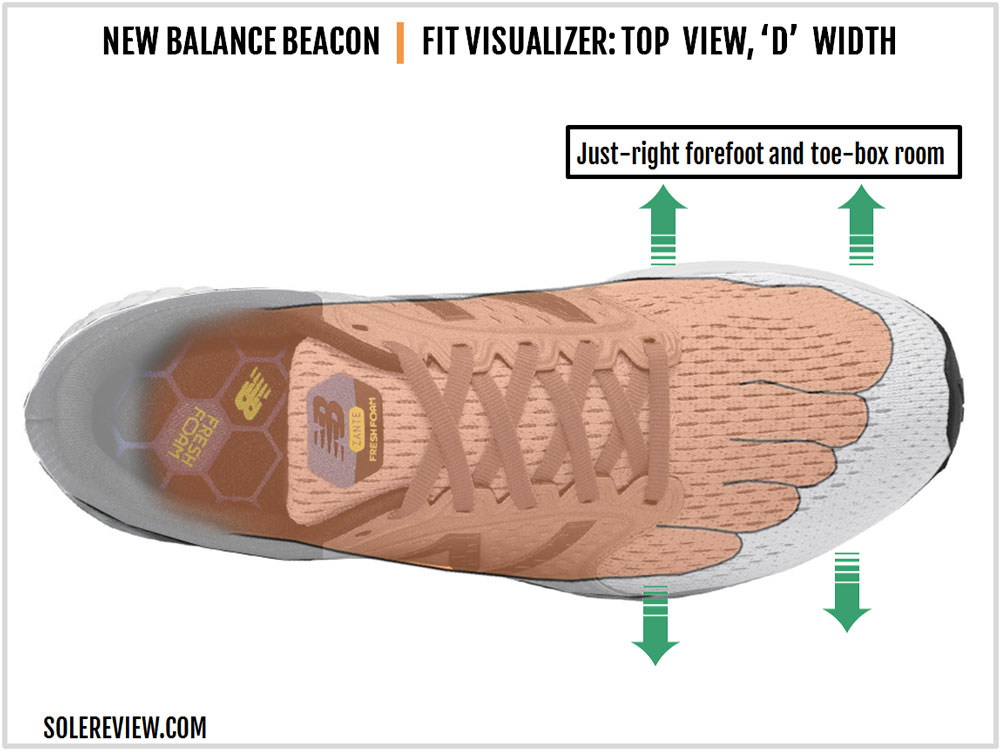 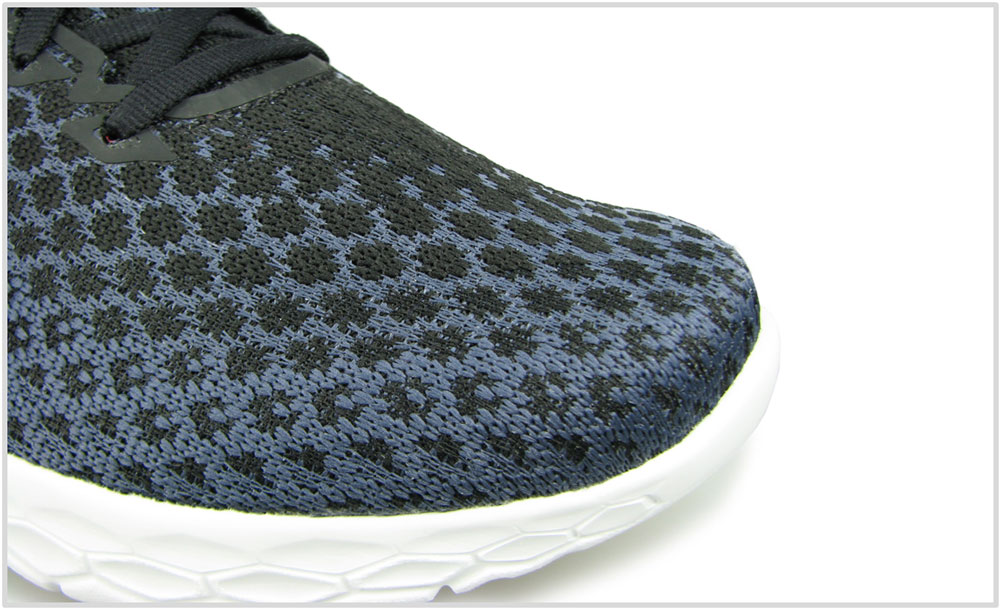 The toe-box is human-shaped with sufficient room to splay. The toe-box height is just right too. The Beacon uses a thin gusset which does a great job at securing the midfoot. The external mesh doubles up as the internal lining so the interiors are seamlessly smooth.

The standard D width fits snug – which is a good thing if you plan on running fast in the Beacons.

The mesh looks warm from the outside but the ventilation is nothing to complain about. As you can see in this picture, the mesh has a generously pored structure. 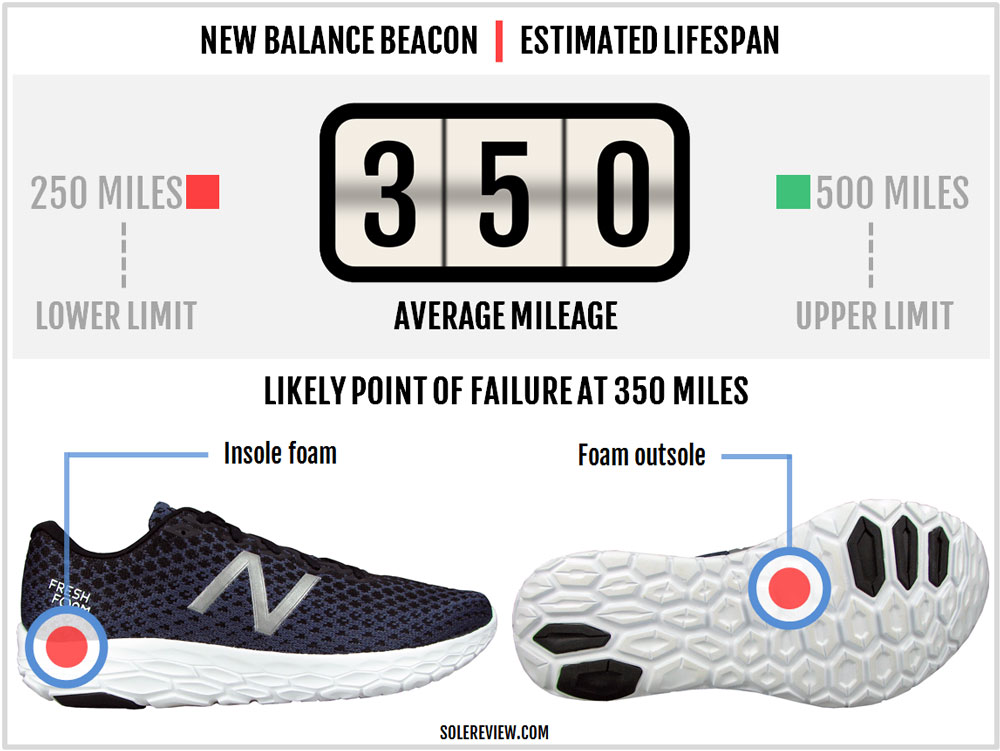 Foam outsoles have come of age. They’re no longer the flimsy material(s) which wore down within the first 50 miles. Most foam midsoles from established running shoe brands perform at par with rubber lugs. Well, almost.

In the Beacon’s case, the foam lugs will show signs of wear after the 150 miles mark. The rubber lugs do some of the heavy-hitting but they’re restricted to a small section.

The midsole foam holds its compression and overall cushioning very well. The optimal range for the Beacon is 350 miles; along the way, the insole will bed in. 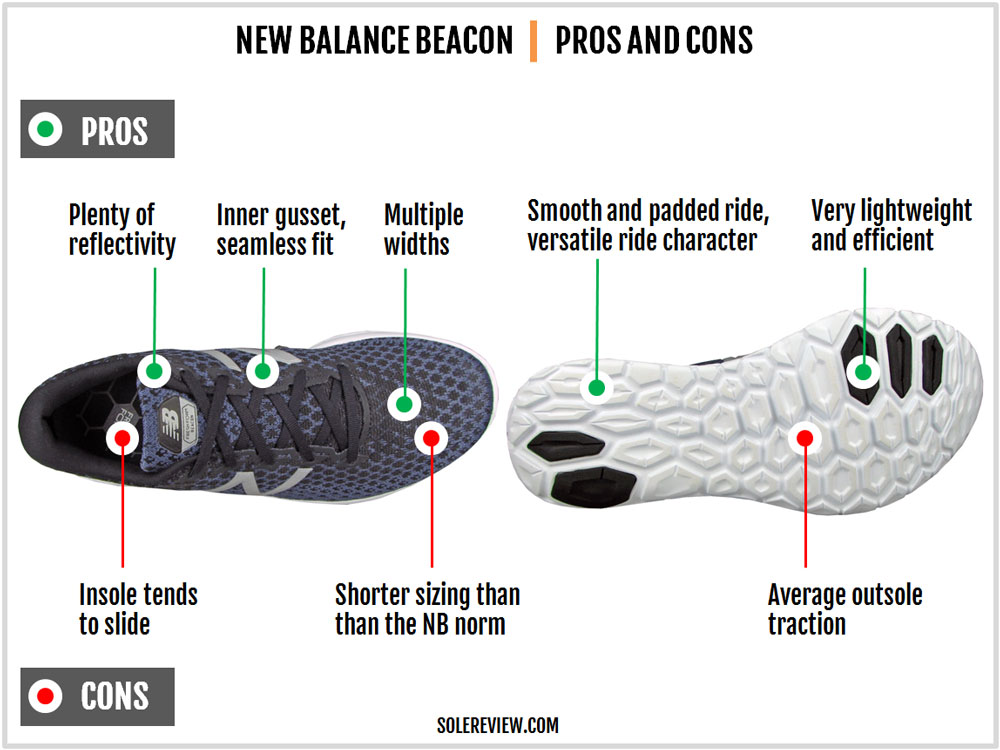 The Beacon has many strengths, making it an under-rated piece of equipment. That implied, it isn’t perfect.

To begin with, it’s too expensive for a running shoe which slaps on a single-piece upper over a basic EVA midsole with no outsole. As you’ll later see in our ‘similar shoes’ break-out, most shoes in this category cost less than the Beacon.

The outsole traction is average under two conditions. Under colder temperatures, you don’t get a lot of grip from the nearly all-foam outsole. There will also be an eventual decrease in outsole traction with wear and tear.

The Beacon has a smooth, molded insole over a foam lasting. This makes the insole move around a bit. Lastly, the sizing fits shorter than New Balance standards. 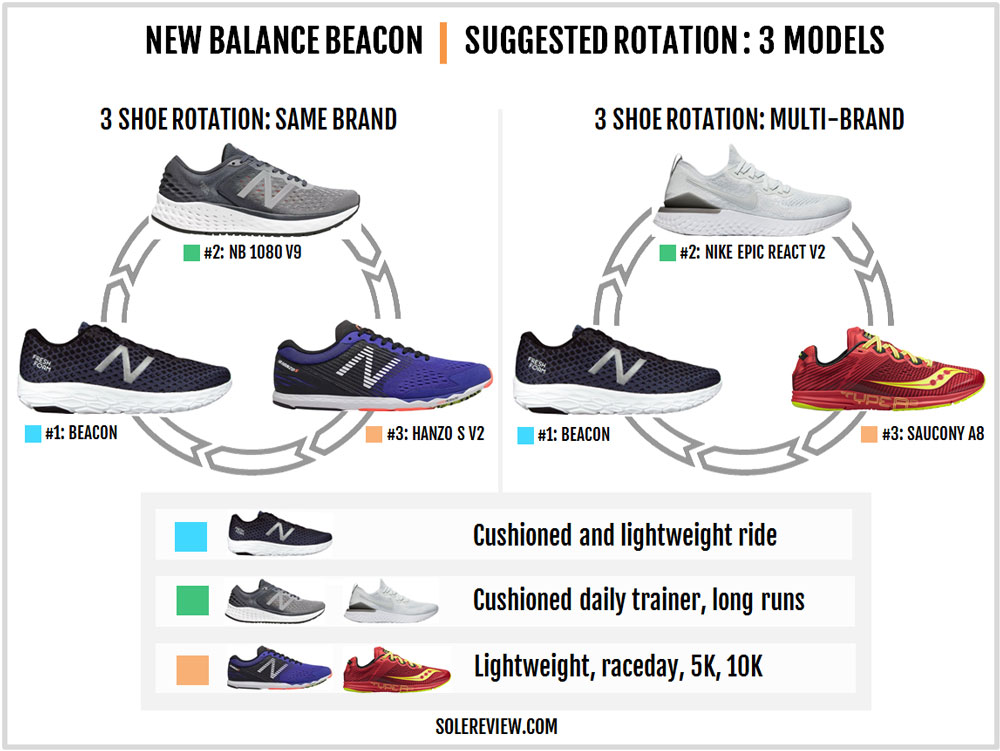 The New Balance 1080V9 has plenty of deep cushioning for the longer miles. The Beacon can do it as well, it’s just that the 1080V9 happens to be more comfortable. You can’t rush the 1080 though – unlike the Beacon, this isn’t a shoe for quicker paces. It’s a long distance cruiser, that’s what it is.

If the 1080V9 doesn’t cut it for you, Nike’s Epic React V2 is an excellent option for the longer miles. The React midsole is generously endowed with deep cushioning for long-distance comfort.

The Hanzo V2 racing flat is a near-perfect tool of choice for making short work of those 5 and 10K races. This 6-ounce work of art features a DSP (Dual Stencil Process) forefoot section in a Revlite midsole with a 4 mm offset. For a high-tech race shoe, it is reasonably priced.

And for some unexplained reason, if the Hanzo V2 doesn’t suit you, then Saucony Type A8 can be your race-day shoe. We’d pick the Hanzo over the A8 any day though. 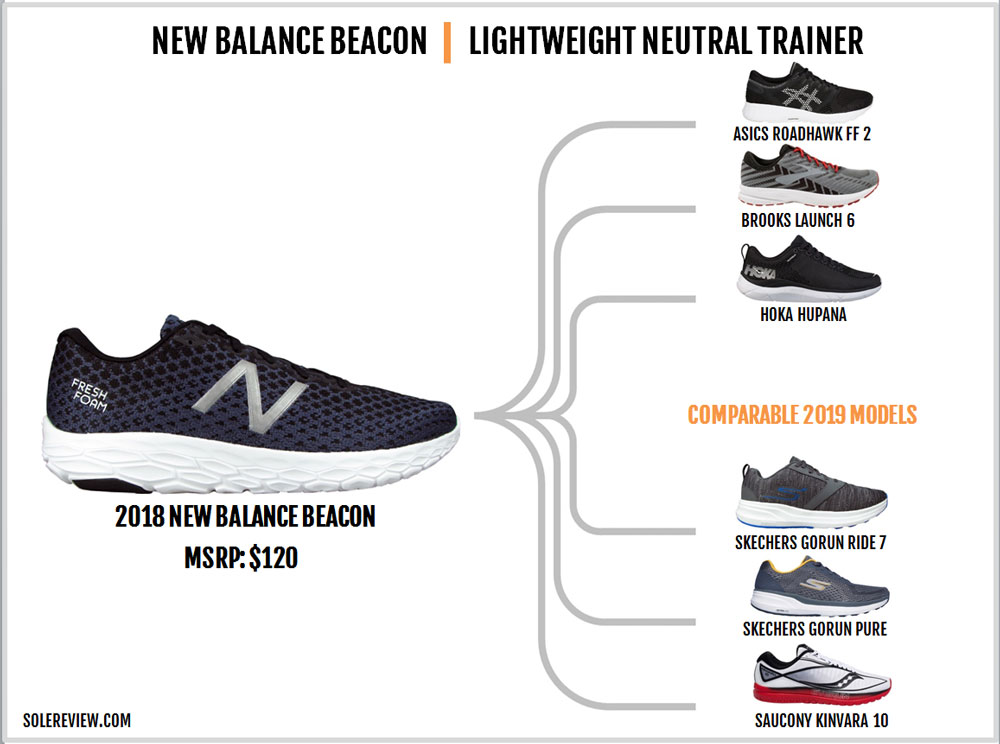 The lightweight neutral trainer class bridges the gap between fully-loaded neutral trainers and low-profile trainers. This is where the New Balance Beacon and the rest of the shoes on this chart fit in.

It’s hard to find shoes with a 6 mm heel offset, so the recommendations here have a wide range (4 mm to 12 mm) of heel drops.

Asics retails the Roadhawk FF 2 with a softer variant of Flytefoam, making it more comfortable than the firmer Dynaflyte 3. The upper is minimal and directionally new by Asics standards. The generous spread of outsole rubber makes it 2 ounces heavier than the Beacon.

The Brooks Launch 6 has been a crowd favorite for several reasons. It’s not super expensive, the 9-ounce weight is respectable, and the interior environment has the plushness you can expect of Brooks. The firm midsole has ample cushioning for daily training or long miles without any laziness.

There is a shoe in Hoka One One’s assortment which compares with the Beacon, and it’s the Hoka Hupana – an 8-ounce trainer with a 5 mm offset and just-right cushioning.

Like the Beacon, the Hupana’s got a foam midsole and outsole along with a knit upper to match. The Hupana rides firmer than the Beacon.

We mentioned Skechers early in this review so it’s only fair that we list a couple of models here. The GoRun Ride 7’s got plenty of resilient foam cushioning in the tank for long-distance runs. The GoRun Pure is another less expensive Skechers option.

Lastly, you have the shoe which has founded this category – the Saucony Kinvara. This 4 mm offset shoe weighs less than 8-ounces and is now in its 10th year. And while it’s gained some flab over the years, it still is a great choice as a versatile lightweight trainer.