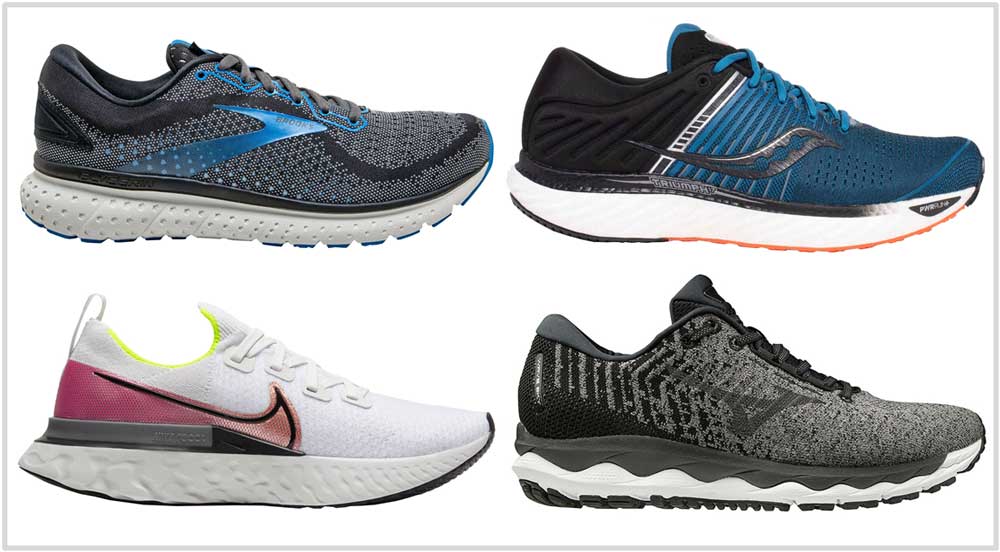 This article has been updated with current models for March 2020. We’ve replaced the Brooks Glycerin 17, GTS 19, Beast 18, and the Triumph ISO 5 with their updated versions. The Asics Nimbus 22 and Nike React Infinity Run are news additions. The Asics Gel Fortitude and Brooks Transcend 6 have been removed. A similar article for women’s footwear can be found here.

You’re probably reading this guide because you weigh more than 200 lbs/90 kilos. The word ‘heavy’ has several contexts; maybe you just happen to be large-framed with large feet. Or one might not necessarily have low or flat arches – there are many heavy runners with a regular arch.

“Buy a running shoe with the softest cushioning. They’re the best for heavy runners.” That, or “You can’t go wrong with a stability shoe for over-pronators.”

Wrong. That’s not good advice at all.

We understand why most people recommend max-soft or motion-control shoes, though. The underlying (and misinformed) logic is that a softer ride equates to better shock absorption, but that simply isn’t true.

In fact, an overly mushy shoe can do more harm than good when you’re north of 200 lbs. Here’s why:

An uber-soft running shoe is unstable for high bodyweight.

A shoe that feels supportive for a 150 lb runner might end up throwing a heavier runner around. If the midsole isn’t supportive, then that translates into more work for the body.

During each phase of the gait cycle, the body will have to work hard to compensate for the shortcomings of the unstable shoe. This increases the chances of injuries.

Excessive midsole softness can cause the shoe to bottom out.

The Asics Nimbus 17 was a perfect example of this in action. Its midsole was so mushy that it bottomed out even if you were a 150 pounder, and parts of the outsole were felt during runs. That defeats the entire purpose of the midsole, does it not?

An extremely soft shoe will lead to a significant variance between the static and dynamic heel gradient.

But you should take the static heel drop with a huge grain of salt. The heel offset of a shoe when fully loaded can differ a lot from the static drop. Select a shoe with a firm midsole to minimize this variance.

Running in a very soft shoe will result in a lower heel gradient than expected; more so when the footstrike load is in multiples of 200 lbs.

For all you know, a ’10 mm’ drop might turn into a 4 mm offset or less during running. This might strain your Achilles or Calf muscle if you’re not used to running in footwear with a lower offset.

Except for newer materials such as the adidas Boost, Nike React, Reebok Floatride, and Saucony Pwrrun+, foam-based midsoles tend to lose their cushioning over a few hundred miles. A heavy runner using a shoe made of a soft EVA foam compound is likely to fatigue it sooner than a lighter runner.

So far, we’ve painted super-soft running shoes in a poor light, but there are exceptions to each generalization. Certain shoes made from new-gen foams can be very soft yet durable.

Traditional ‘stability’ shoes can end up achieving the opposite effect

Conventional stability shoes have a firmer inner midsole and a softer outer side. While this design prevents rolling of the foot towards the inner side, it comes at the cost of midsole bias. The body weight will follow the path of least resistance and lean towards the outer side.

Not all ‘stability’ shoes are stable. This is the reason why you won’t see an Asics Gel-Kayano or a New Balance 860 on our guide. The Saucony Redeemer is a medially-posted exception because of its high level of inherent support.

If very soft shoes and lateral leaning stability models are off the menu for heavier runners, then what’s left to buy? Good question.

Softness and cushioning are often used interchangeably, but cushioning – the ability to protect the foot from impact forces – exist in firmer shoes too. So it is important to buy a shoe that is cushioned yet supportive; one that is capable of handling 200+ lb body-weight over hundreds of miles.

There many such cushioned (and supportive) running shoes but it can be a challenge to trawl through the confusing assortment of products.

To help narrow your search, we’ve curated a list of a dozen running shoes suited for heavy runners. This list is far from exhaustive but a good place to start.

The Nimbus did not get a spot on this guide the last time. Because, you know, the Nimbus 21.

The year 2019-20 has been kinder to the Nimbus. With a redesigned upper and midsole, the 22nd edition is a vast improvement over the 21. The midsole is comfortable and yet stable enough for heavier runners.

The upper is plush with a just-right fit. And if you have broad feet, the Nimbus 22 sells in a variety of widths.

Contrary to how Brooks markets the Glycerin 18, this shoe isn’t the epitome of cushioning plushness. At best, the cushioning strikes an excellent balance between comfort and stability.

In the context of this guide, that’s an ideal trait. The full-length DNA midsole isn’t super cushy, so the firm undertone ends up making the ride supportive. The midsole is single-density, so you get the smoothness along with ample traction from the grippy outsole rubber.

In true Brooks style, the sleeved upper is plush as always; no complaints there.

Brooks led the way with its supportive ‘Guiderails’ system on the original Transcend as a means to replace the antiquated medial post. Since then, the GuideRail has made its way to many Brooks models, the Adrenaline GTS 20 included.

Without its medial post, the Adrenaline is no longer the traditional ‘stability’ shoe the GTS 18 was. It’s more of a supportive neutral; think of it as a Ghost 12 with raised sidewalls.

The result is a shoe that is cushioned yet has sufficient support for runners with a higher body-weight.

Hold on a moment – why is the Beast part of the ‘supportive neutral’ list? Isn’t the Beast the fairy godmother of all traditional, medial-posted shoes?

Dear child, that was last year. For 2020, the Beast trades the Octo-density midsole for a design with GuideRails. The newest Beast has a wide BioMogo DNA (EVA-based foam) midsole with raised sidewalls. The inner Guiderail has a firmer density for a higher level of support. With these changes, the ride character takes a decidedly neutral and supportive turn.

In a way, the Beast is now a bulked-up Transcend – and that’s the reason for the latter’s omission from this guide.

The comfortable upper is spacious and is offered in a range of widths for runners with wide feet.

There are a couple of things which make the Wave Rider 23 suitable for heavy runners. The forefoot midsole has a wide flare and the rearfoot is reinforced with the Mizuno Wave plate. The Pebax insert prevents excessive compression and the flared forefoot keeps landings and transitions planted.

And if you’re a heavy runner with wide feet, the standard ‘D’ width has sufficient room for splay. A 2E width is optional as well. 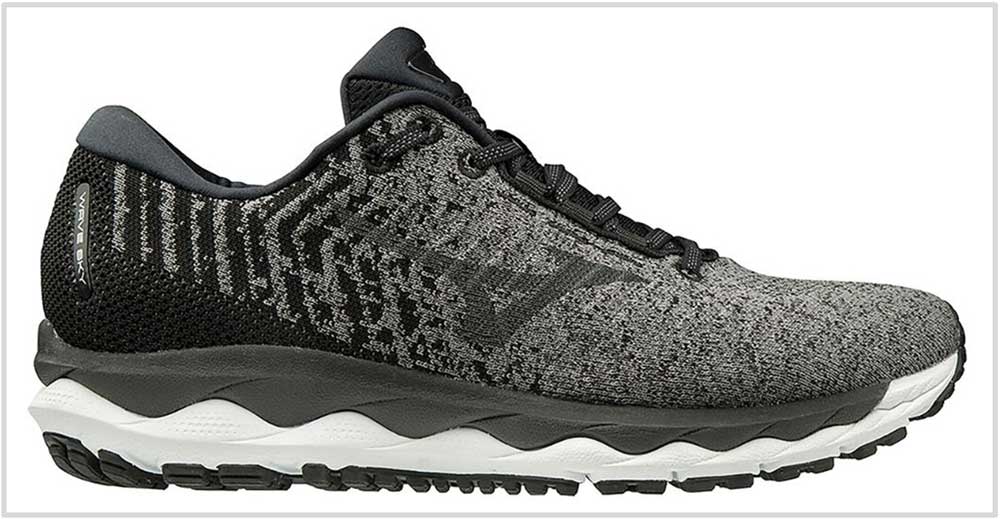 The Wave Sky 3 Waveknit is a Mizuno with a difference. It belongs to a new breed of Mizuno running shoes that do NOT feature a Wave plate.

Thankfully, that doesn’t affect the overall stability of the shoe. The Sky 3 uses a Polyurethane foam insert over a dual-density midsole, so the ride combines a bit of responsiveness with a plush ride that is effective for heavy runners.

The plush stability is somewhere between the Saucony Triumph 17 and the Brooks Glycerin 17 – and we meant that as a compliment. 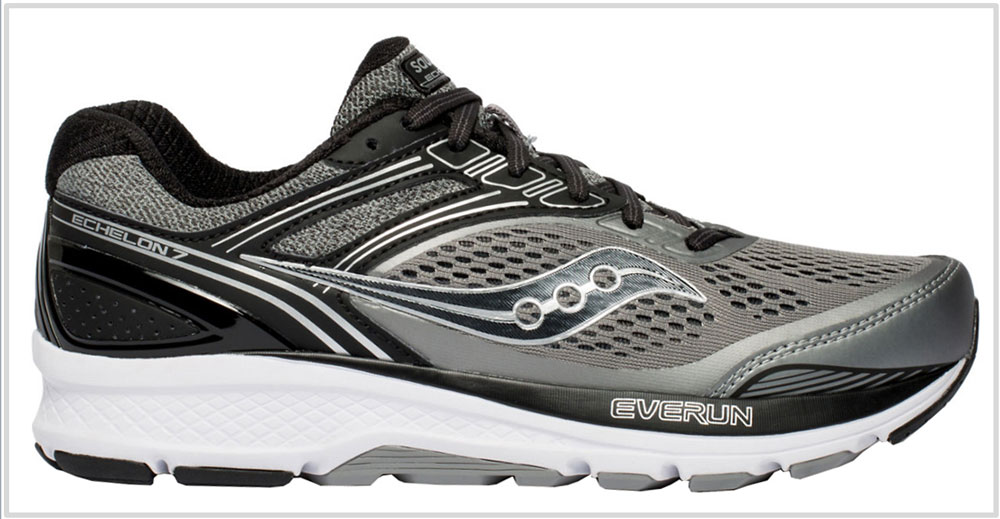 The reasons why the Echelon 7 weighs over 12 ounces is exactly why it’s on this list.

Consider, for example, the ultra-wide outsole footprint and a girthy midsole above it. Or extras such as the contoured insole and the Everun topsole over the cushioned and flexible midsole. You can even swap the stock insole with aftermarket orthoses. These factors make the Echelon a very stable shoe for all-day comfort.

It’s refreshing to see an old-school Saucony upper. The ‘Sauc-fit’ design has bits and pieces you’ll recognize from the older Saucony models – there are plenty of overlays for support mated with a plush heel and tongue lining.

Available till size 15 with an optional wide. 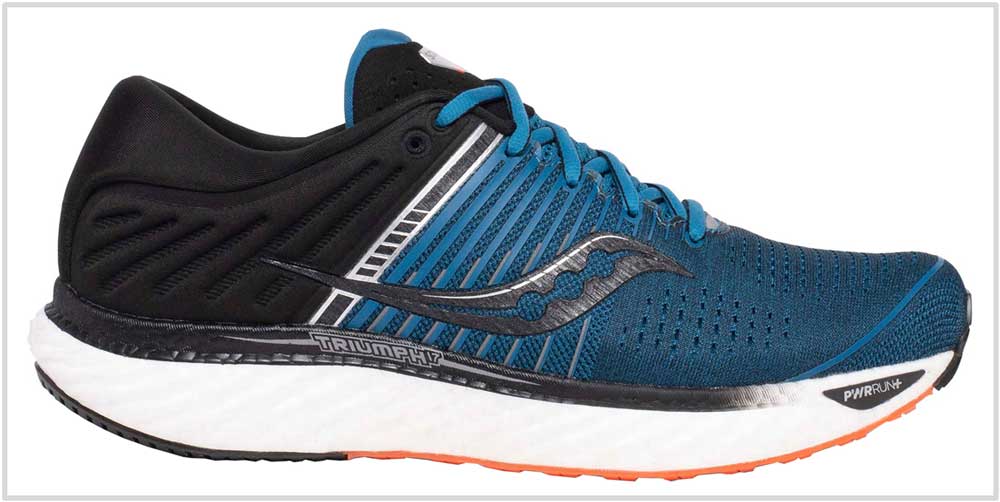 Though the Triumph ISO 5 and Triumph 17 share the same name, the two are nothing alike. Though the midsoles of both the shoes are made of e-TPU, Saucony has completely overhauled the midsole for the Triumph 17. It’s a much softer and comfortable than the firmer Everun-based ISO 5.

Even then, the Triumph 17 proves to be an excellent long-distance shoe for heavy runners. The midsole isn’t as stable as the Everun-based Triumph ISO 5, but the increased ride comfort is compensation enough.

And just like the Everun, the Pwrrun+ foam is resistant to fatigue and temperature swings – it will not flatten like regular EVA foam-base midsoles. The crystal rubber outsole is extremely durable as well.

The upper is noticeably narrower than the ISO 5, so pick the 2E (wide) version if the regular fit is overly tight.

The Nike Epic React V2 has a cushioned ride thanks to its full-length React foam midsole. Admittedly, the Epic isn’t as supportive as the other shoes on this list. And yet, the synthetic rubber-based midsole has a very dense cushioning that is ideal for heavier runners. The heel sits atop a plastic stabilizer that reduces the chance of sideways bias.

The upper grips well, the midsole has a wide forefoot base and the React foam doesn’t bottom out.

So if you’re willing to trade a bit of stability for non-mushy cushioning and lower weight, the Epic React is an option. Available in a single width till size 15.

If one finds the Epic React lacking in support, then the Infinity Run is an excellent alternative. The urethane clip and the upper overlays add more structure from the midfoot to the heel.

That doesn’t result in a lack of cushioning. The high-volume React foam midsole has deep cushioning that makes high-mileage runs comfortable while being resistant to material fatigue – thanks to the rubber blended foam. The outsole is generously grooved and channeled for a smoother ride. As a result, the Infinity is softer than the Epic React.

Though there are no optional widths for the Infinity Run, the knit upper has an accommodating character. Because of the relaxed fit and heel grip, it is best to limit the cushioned Infinity Run to low-speed workouts. 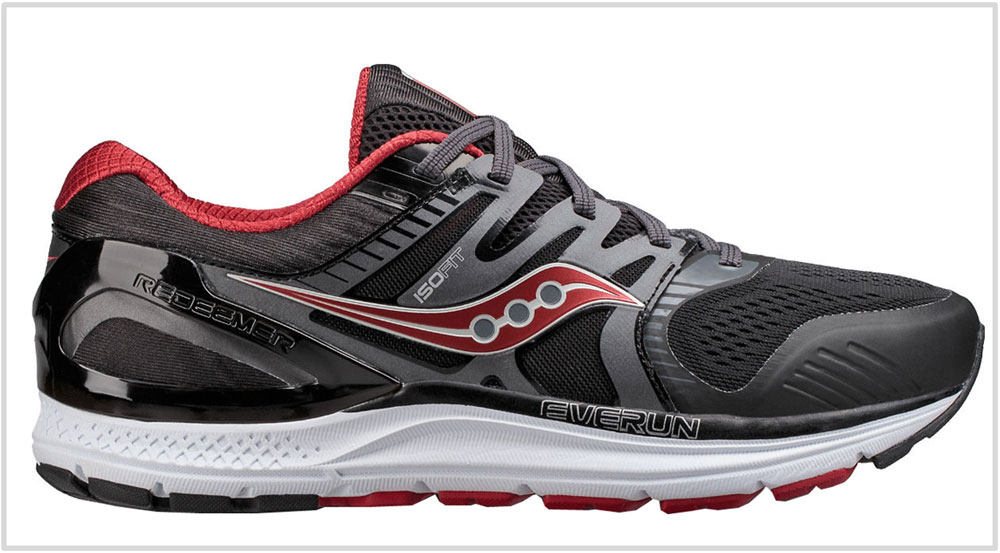 The Redeemer ISO 2 has a couple of unique features that differentiate it from other stability shoes. It’s got an 8 mm thick insole which not only adds top-layer cushioning but also makes it possible to replace it with an aftermarket insole.

The second feature is its ultra-wide midsole and outsole geometry which makes it great for heavier runners. The Redeemer weighs 12 ounces but we don’t consider it a negative in the context of this guide.

The midsole has the customary harder foam wedge but that does not produce an acute motion-control effect.

An ultra-wide midsole joins forces with a reassuringly large medial-post to create a cushioned ride that delivers stability without a noticeable bias.

The upper has plenty of room in its stock form, so you can substitute the insole with an aftermarket kind. And of course, the Brooks upper plushness comes standard.

This is a shoe that weighs nearly 13-ounces, so it’s best to restrict it to easy-paced runs.