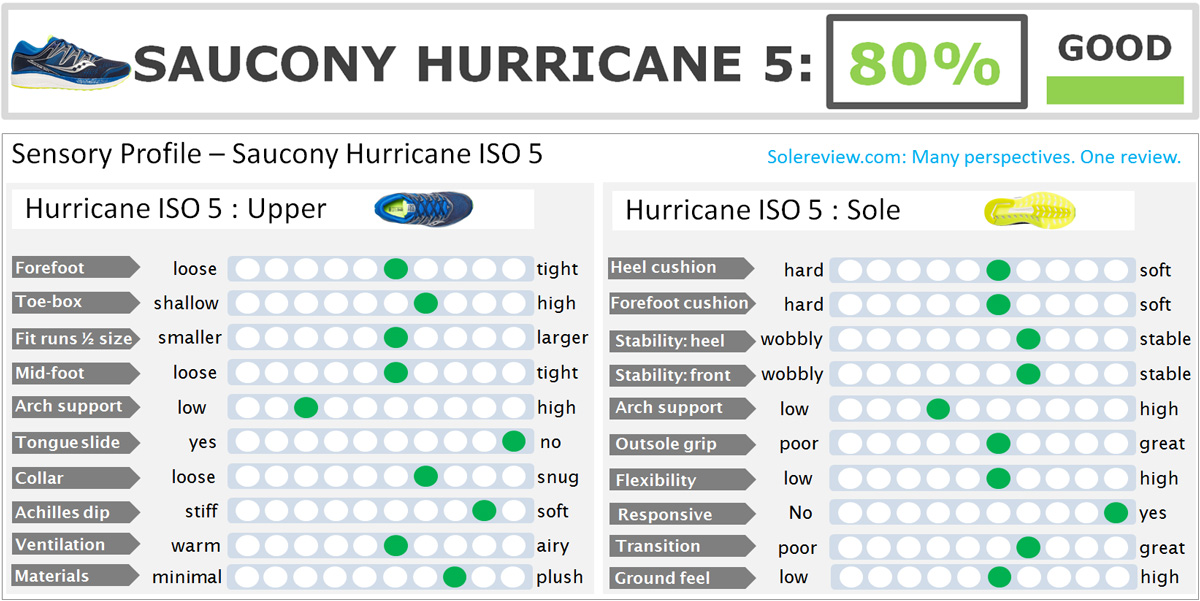 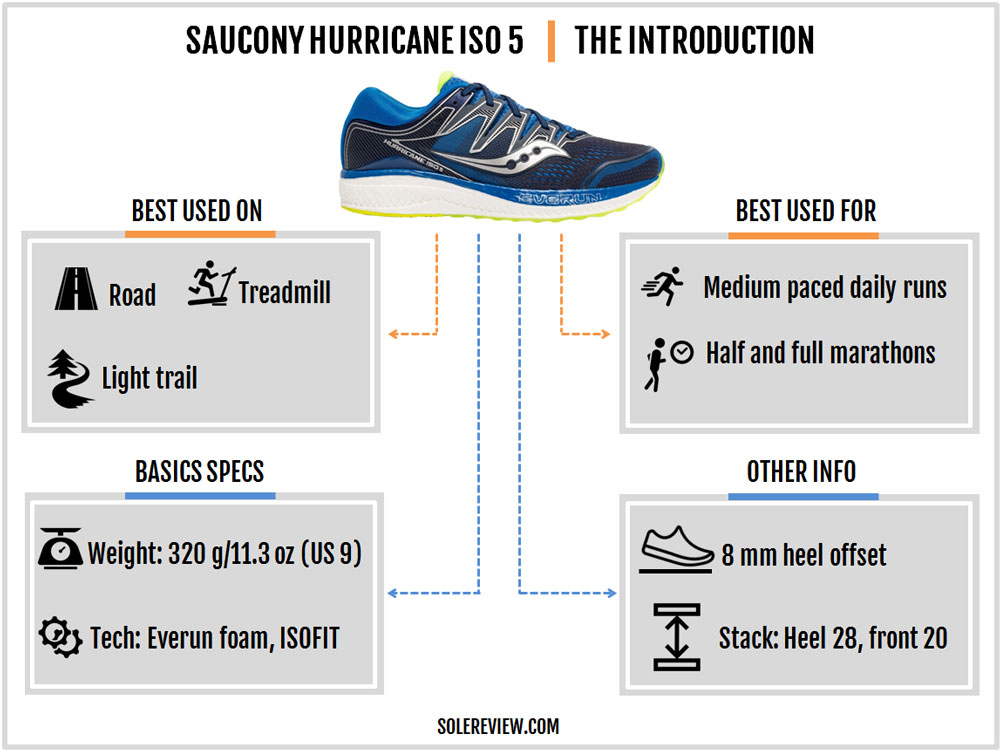 For many years, most brands had their own version of a fully-loaded stability shoe. The kind of products where the designers enjoy a carte blanche to cram in all the features and materials they want.

But today, with the term ‘pronation control’ becoming increasingly irrelevant in the modern marketplace, some brands are checking out of this category entirely. Not all is lost, however. Three brands still have a healthy arsenal of traditional stability running shoes; Asics and New Balance happen to be two of them.

For the third brand, Saucony, the Hurricane ISO 5 is that unapologetic stability shoe. It has a hard-to-miss medial post whose grayness is a stark contrast against the creamy whiteness of the full-length Everun midsole.

The upper combines heel and tongue plushness with an ISOFIT strapping system. The exterior is generously decorated with visual and functional trims, and insides have a smooth, secure, and comfortable fit.

If you follow solereview regularly, reading this review will evoke a sense of déjà vu. And your hunch is right; the Hurricane ISO 5’s update journey mirrors that of the Triumph ISO 5 – its neutral twin.

Omit the fact that the Hurricane ISO has a medial post, and nearly all the changes you’ve read in the Triumph ISO 5 review apply to the Hurricane as well.

Though the Hurricane ISO 5 has a similar full-length Everun midsole like the ISO 4, the annual updates make the 2019 edition better.

The suite of tweaks on the midsole and outsole improve the Hurricane’s ride quality. The outsole no longer sticks to the time-tested combination of blown rubber under the forefoot and a harder compound in the back.

For the ISO 5, Saucony has substituted the ISO 4’s geometry with a thinner outsole made mostly of semi-transparent rubber; these slabs are aptly named ‘crystal rubber’ by the brand. This compound was first used on the Freedom ISO, and we see it on the Liberty and Triumph ISO as well.

The outsole retains the traditional Carbon rubber but only under the heel and forefoot center.

The flex groove orientation follows the same update path as the Triumph ISO 5. The longitudinal flex grooves are replaced by a colony of outsole cut-outs exposing the Everun foam. These windows are placed in a sideways direction so there is a slight upside in the forefoot flexibility. 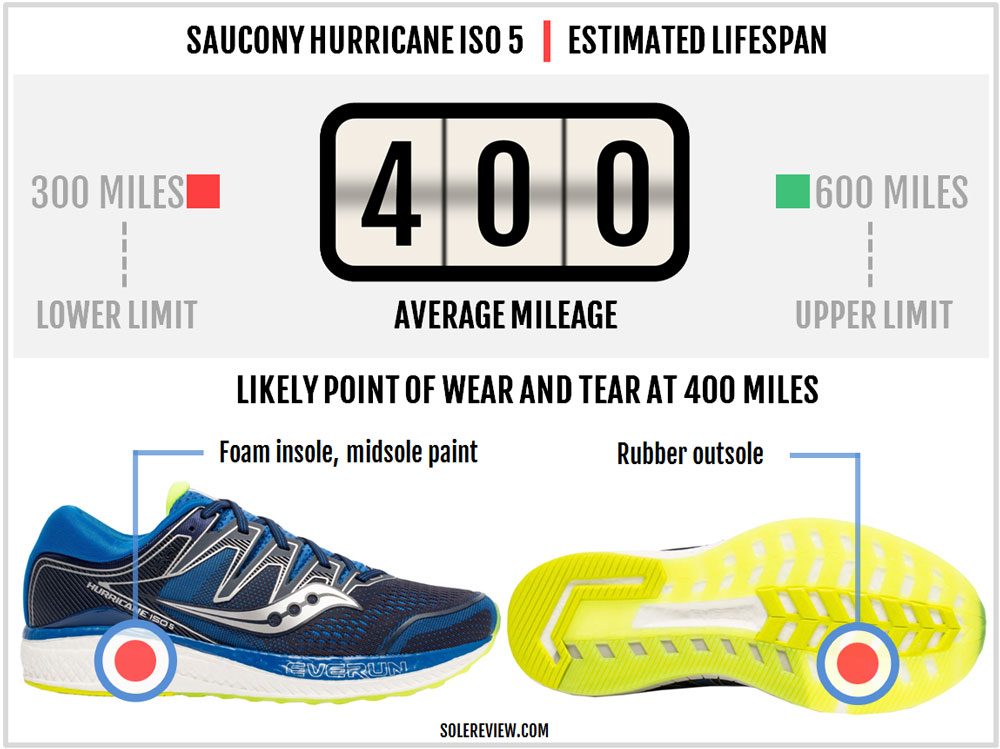 Crystal rubber has proven to be very durable so far, and its use on the Hurricane should yield similar results. Above it, the Everun midsole and the solidly built upper aren’t going to fail anytime soon.

Mind you, the color on the Everun midsole is painted on, so some cosmetic flaking is expected. There will be no impact on the performance, however. 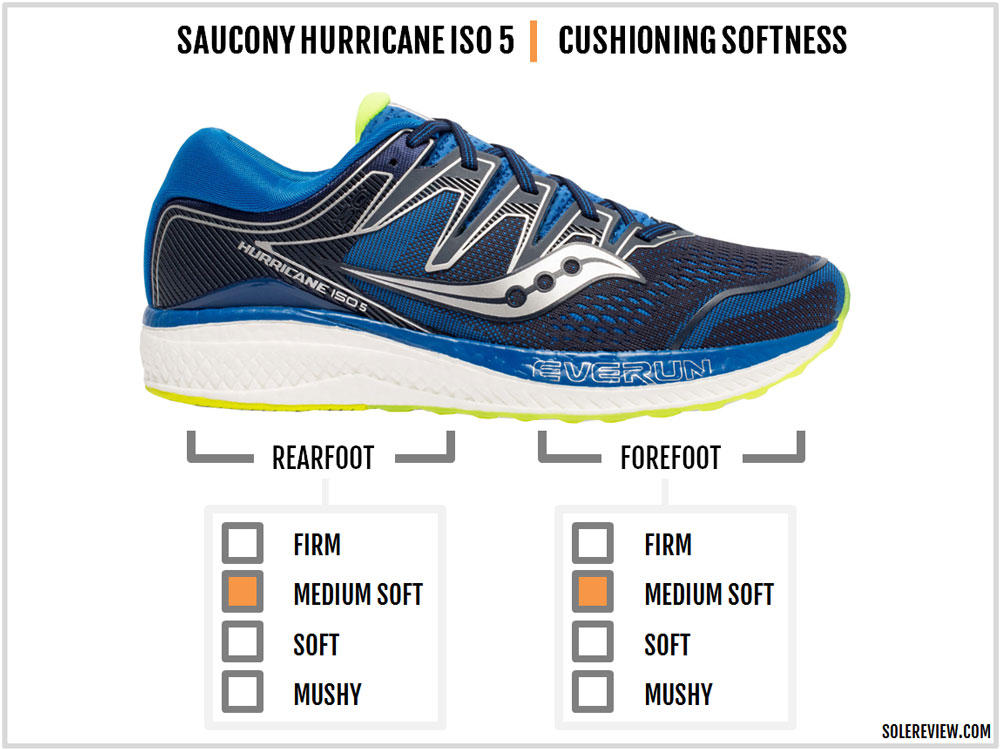 The outsole is thinner by 2 mm, and that difference is transferred upstairs – exactly like what’s happened to the Triumph ISO 5.

Not only is the midsole thicker by 2 mm, but it is higher volume too. The ISO 4’s midsole had a concave scoop below the heel; not so much on the ISO 5. The sidewalls are filled up with more foam. That being said, the midsole maintains its 8 mm heel-to-toe offset.

The Everun doesn’t stop at the midsole. The latter is topped with a dual stack of an Everun ‘Topsole’ and a removable EVA insole. Together, they make a nice layer of step-in cushioning.

The softness has increased under the rearfoot and feels nearly the same under the forefoot. Under the heel, the crash pad gets a transition groove – something which was missing on the ISO 4. This results in improved crash pad flexibility, and when combined with a thicker midsole, produces a softer ride.

The Hurricane ISO 5’s forefoot loses the blown rubber outsole so despite the thicker midsole, the softness stays the same. 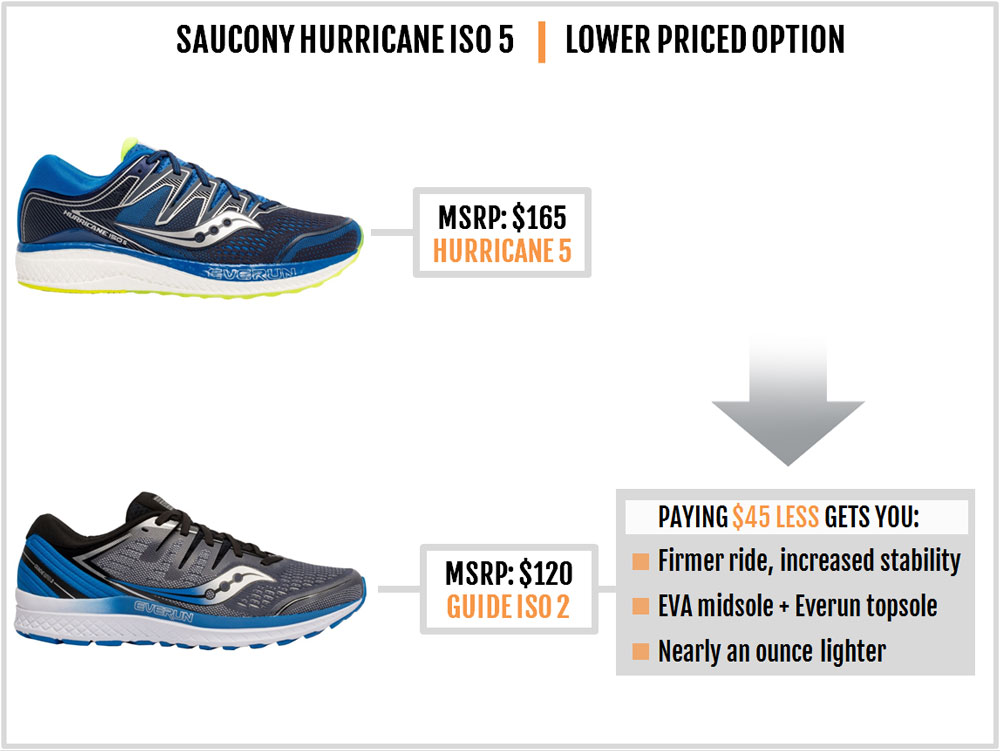 Since most of the cushioning is derived from Polyurethane, the Hurricane ISO 5 is a heavy shoe. Its 11.3-ounce build outweighs the Saucony Guide ISO 2 by more than an ounce.

The Guide ISO is another stability shoe with a firm ride. We rated the Guide highly in our recent review due to its well-rounded manners. So if you’re not a fan of the Hurricane’s price or weight, then the Guide is a reliable alternative. 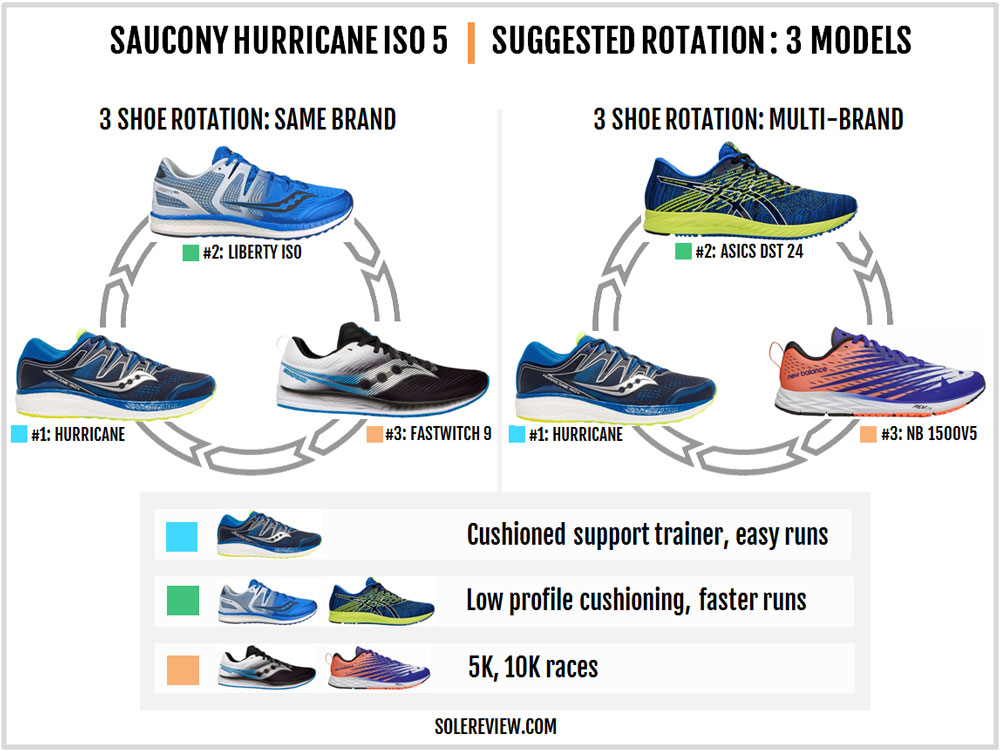 Better still, the Hurricane ISO 5 can be rotated along with the Liberty ISO – a 10-ounce trainer with a lower profile cushioning. Though the Liberty is labeled a support shoe, it as good as a neutral shoe. A plastic stabilizer wedged between the midsole and outsole gives the Liberty its stability undertone.

The Liberty is a relatively soft shoe for its category so the Asics DS Trainer 24 is a superior choice as a firm and efficient lightweight trainer. Asics has done an excellent job with updating the DS Trainer this year; the upper fit has improved a lot and so has the sole composite. Both these models work better for faster runs than the Hurricane.

For races, the Saucony Fastwitch 9 or the New Balance 1500V5 add value when rotated along with the Hurricane. 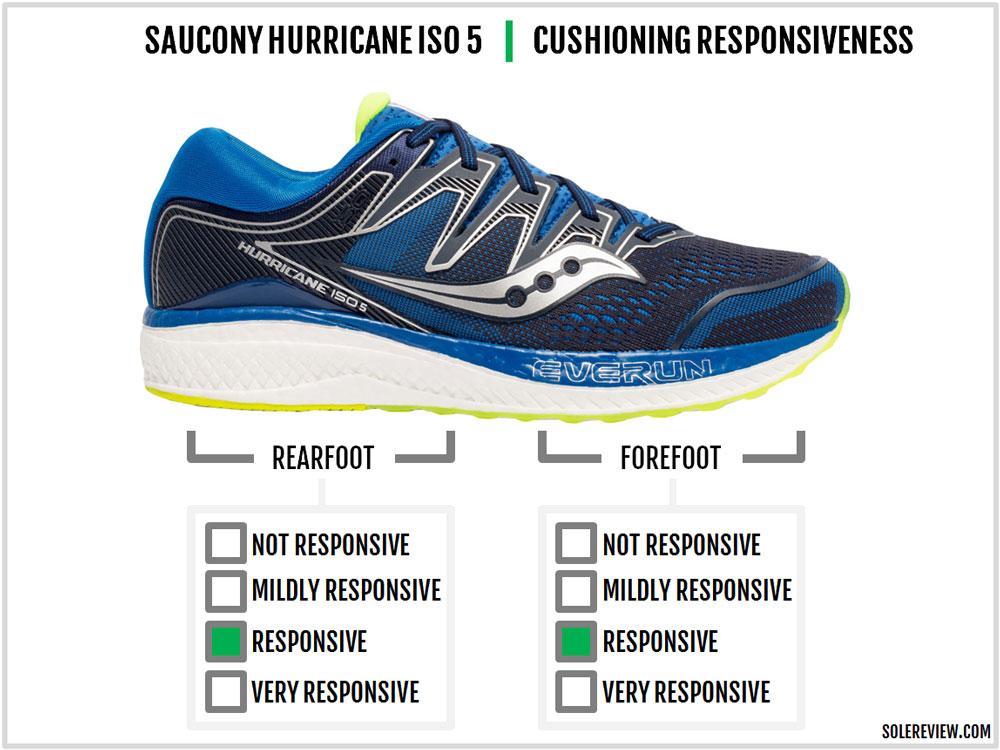 As a stability shoe, the Hurricane ISO 5 behaves rather uniquely. To begin with, there’s a lot of dense cushioning available within the Everun midsole – not many shoes in this category have that.

There was a parallel with the adidas adistar Boost, but that shoe is now a historical footnote. Hypothetically speaking, if Reebok comes up with an e-TPU Floatride based stability shoe, that would compare with the Hurricane.

The said cushioning is also responsive – the fused Polyurethane globules have a nice rebound quality to them. It’s not like the adidas Boost which is far softer in comparison, but slightly firmer than what Reebok uses for its Floatride Forever Energy. 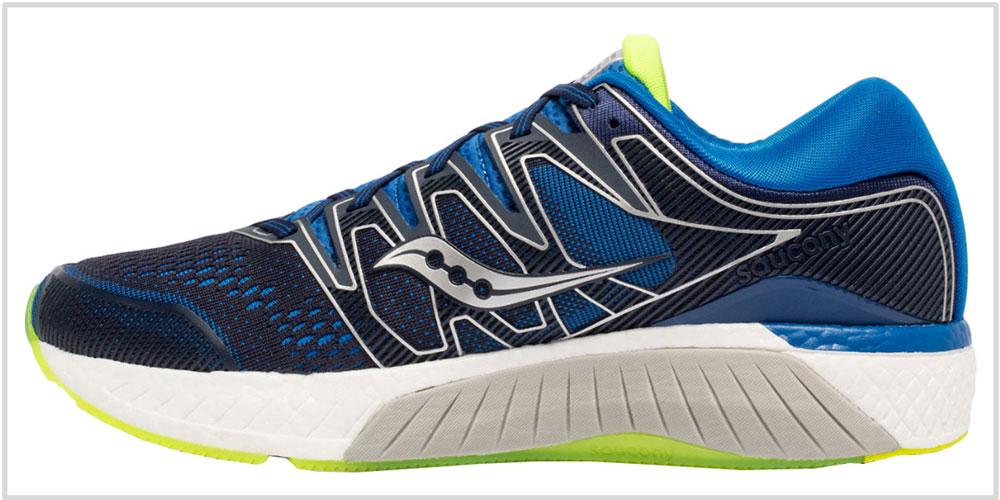 The firmness makes the midsole fairly supportive. At the same time, there’s a bit of a bias favoring the outer side. This is a given considering how large the medial-post is.

While the foot doesn’t load directly over the hard foam due to the thin layer of Everun, you do sense that there’s a harder section on the inner side. So runners who prefer the ride characteristics of neutral running shoes should strike the Hurricane off their shopping list.

The Hurricane ISO 5 is a good buy for the long and slow workouts – but only if one prefers cushioned running shoes with medial posts.

Otherwise, for $5.00 less, the very neutral Saucony Triumph ISO 5 serves the same purpose. Both these models are good for heavier runners too – the Everun midsole delivers cushioning without bottoming out.

The new upper on the Hurricane – as well that of the Triumph – bring about changes by reducing complex layers and trims. The lacing loops of the ISO 4 led to an excess of upper material over the foot. Even the tongue felt bulky. 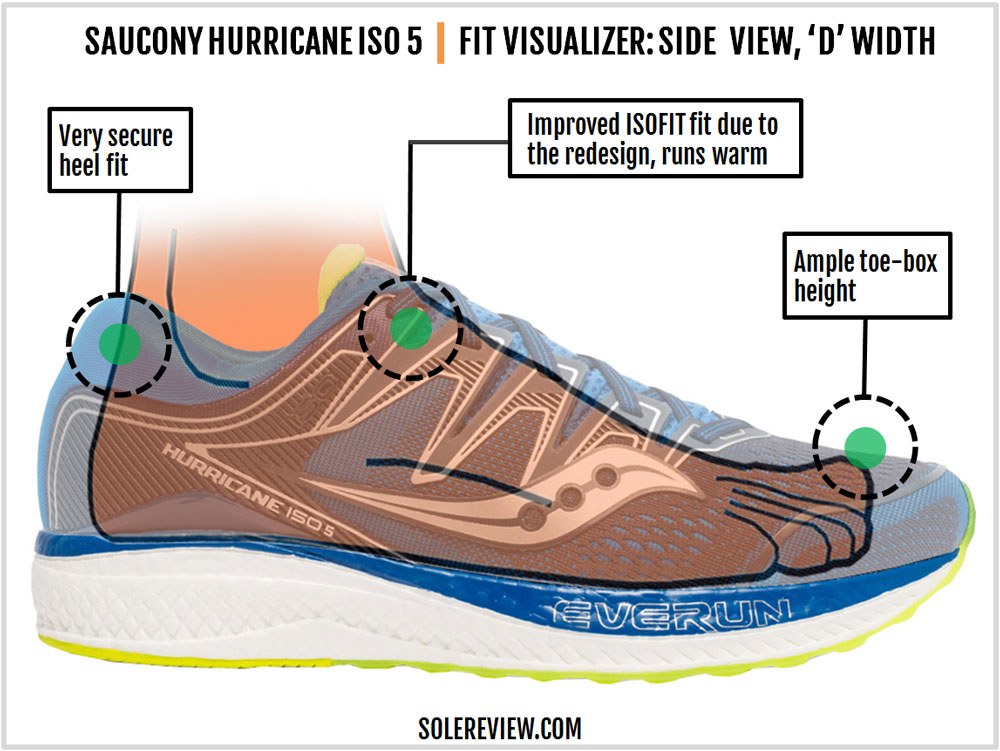 Switching to plain eyelets on the new ISOFIT straps alleviates the top-down pressure; the simpler tongue flap also helps. Even the first lacing row has been converted to regular eyelets to prevent the gathering of materials.

The only drawback of the new strap is an aesthetic kind. The tips of the straps are rather broad so when the laces are cinched tight, the tip of the ISOFIT tends to pucker. Nike prevents this from happening by reinforcing the tips with a transparent overlay; Saucony should take heed.

The midfoot has high-density printing instead of the ISO 4’s molded mesh, and there’s a Saucony logo on the inner side. These tune-ups give the Hurricane ISO better aesthetic balance besides the improved midfoot fit.

While fitting true to size, the Hurricane ISO 5’s toe-box has a couple of updates. The synthetic bumper of the ISO 4 is swapped with an internal kind and the overlay over the big toe has been removed. In lieu of the synthetic toe-box is a rubberized section on the inner side. Functionally speaking, the changes do not amount to a lot – but there’s some relief over the big toe.

The ventilation is average. The engineered mesh forefoot does its job but the midfoot is sleeved – a factor which inhibits circulation. A thin gusset (like what New Balance uses) aids ventilation better than thick sleeves.

The heel fit is more conforming than the last model. The collar is made of a single lining which wraps snugly and smoothly; the generous amount of foam padding and an internal counter helps lock down the heel.

Also worth noting is the redesigned heel clip which cups the foot. The rear has two small ‘wings’ flanking either side, as opposed to the single piece of molded clip on the ISO 4. 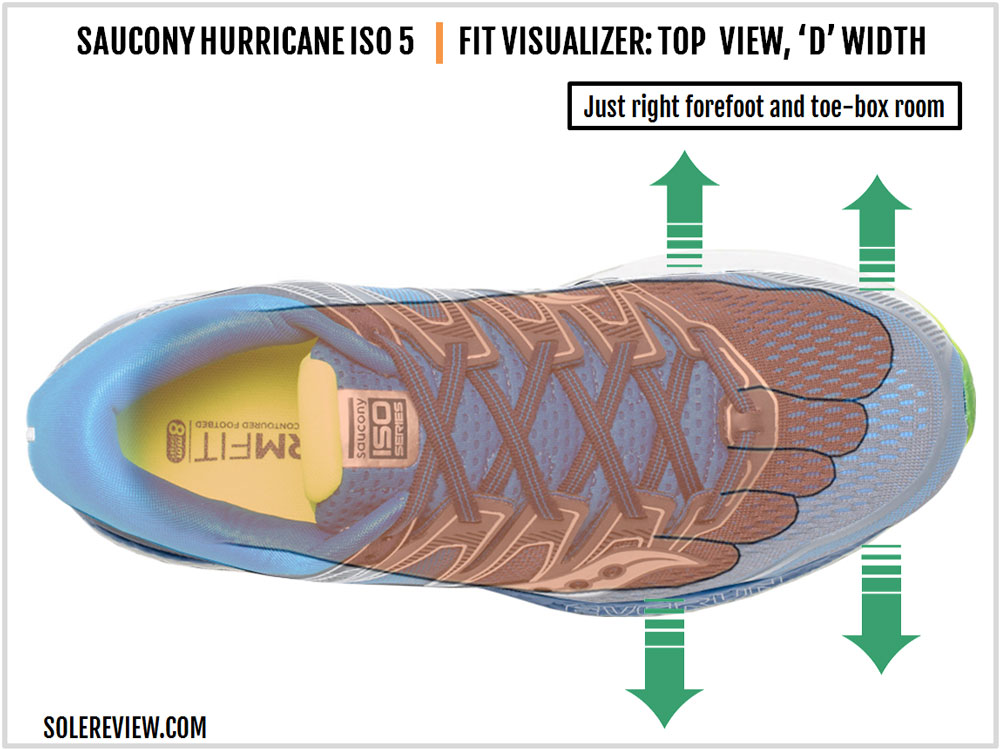 As a whole, the Hurricane ISO 5’s upper gives you many reasons to like it. The ISOFIT section doesn’t feel gratuitous, the sizing fits true, and the forefoot has a just-right amount of space. The Hurricane’s heel also has a reflective strip for low-light conditions.

The Hurricane ISO 5 is optionally available in a 2E (wide) width. 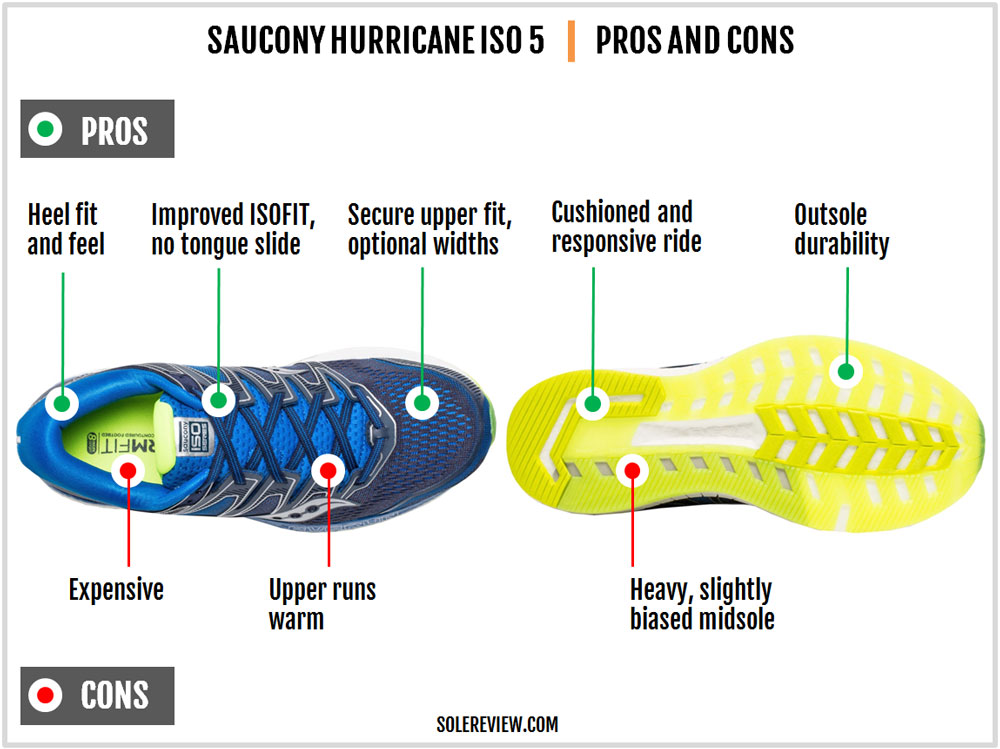 If one discounts the fact that the Hurricane ISO 5 is an 11+ ounce and a $165 shoe, then there are plenty of good things to say about the shoe.

The Everun midsole is full of deep cushioning for high mileage comfort. The outsole is durable and grips well  – except on slick roads. The upper has evolved into a refined version of itself and fits better than the last one. The upper fit has excellent proportions, albeit a bit warm.

The midsole has some compression bias as one would expect of motion control shoes. Nonetheless, the midsole is redesigned such that the foot doesn’t directly load over the firmer wedge. 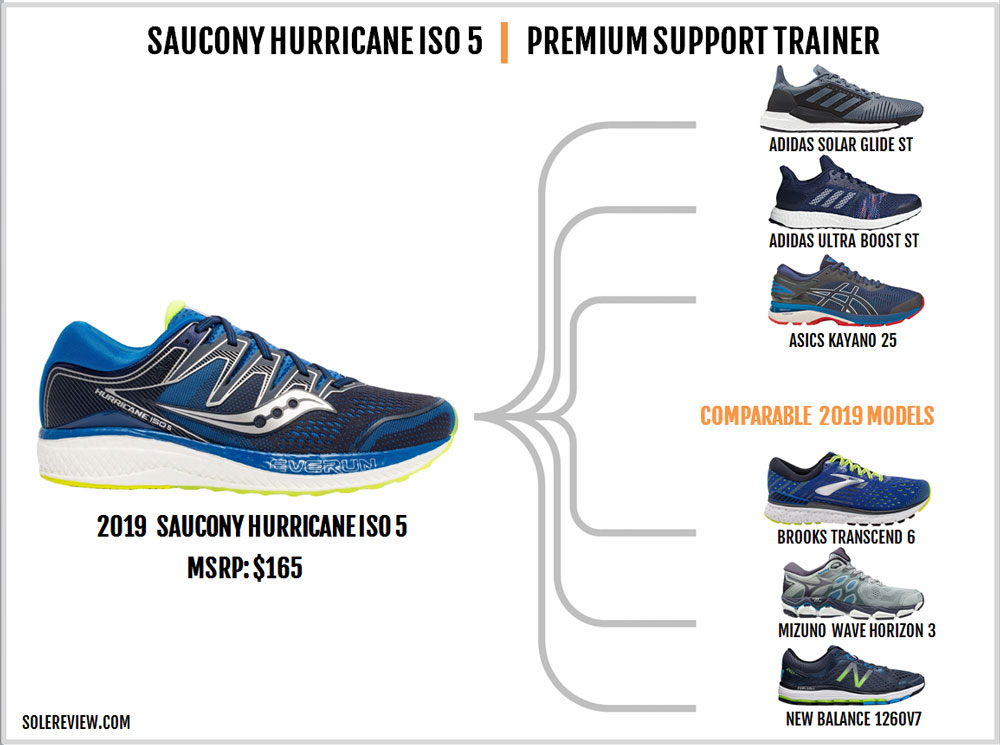 Often overlooked, Mizuno sells a support shoe with a plush upper and cushioning softness – all without a conventional medial post.The Wave Horizon 3 has a structured Wave plate on the inside for a higher level of supportive firmness. The rest of the shoe is all foam and soft-touch materials – a throwback to vintage premium trainers if you will.

There are two other support shoes with a soft ride. The adidas Solar Glide ST has a full-length Boost midsole – a foam similar to Everun but softer. Its medial side support comes from elevated sidewalls rather than a medial post. The Ultra Boost ST is an even cushier version of the Glide, but calling it a stability shoe is a travesty.

Five years ago, the Brooks Transcend brought the medial post-less concept into the mainstream with its ‘GuideRails.’ The Transcend 6’s wide midsole is a cushioned and supportive platform due to its full-length DNA-Loft midsole and elevated sidewalls.

The New Balance 1260V7 is very traditional stability running shoe. The cushioned, multi-density midsole has a large medial post which gives the shoe a distinct motion-control feel. The upper breaths extremely well, and the shoe is assembled in the USA.