Brooks’s marketing pitch: It doesn’t get softer than this.

The Glycerin has never been a super soft shoe, and nor is this version. That said, the DNA Loft midsole has a smooth and supportive cushioning under a plush upper which fits slightly short.
Very smooth and cushioned ride, stable, premium materials
Heavy, misleading advertising, upper fits warm and slightly short 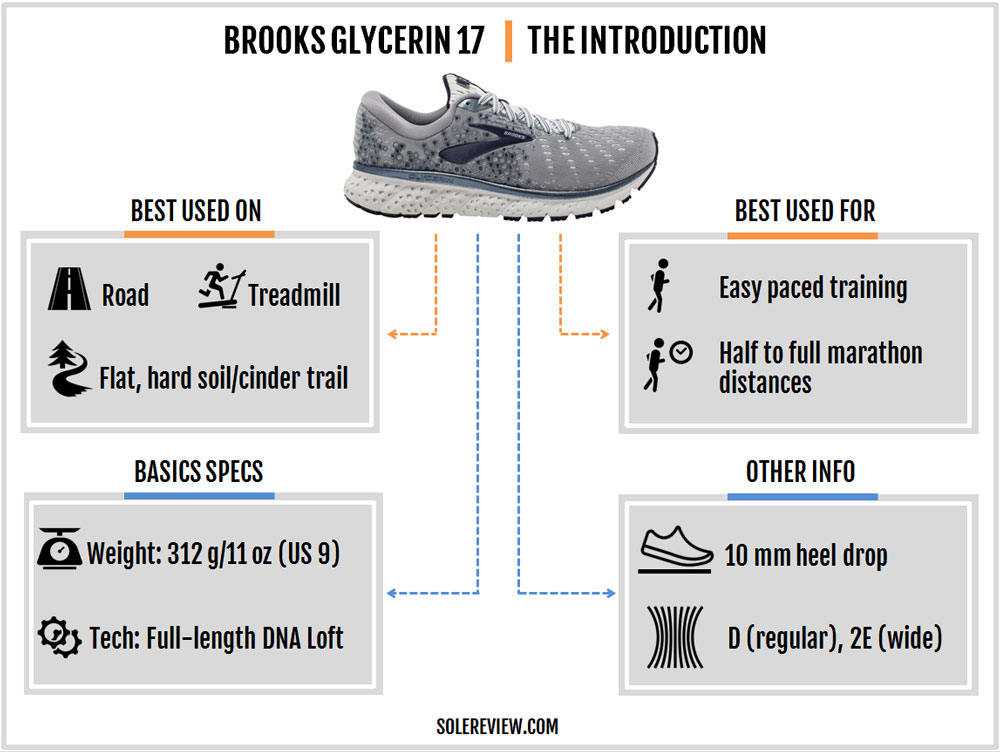 When people say that the Brooks Glycerin has a ‘soft, pillowy ride’, we don’t get it. Are we even talking about the same shoe?

Even with a full-length DNA Loft midsole and the newly added Ortholite insole, running in the Glycerin doesn’t conjure the mental image of a sink-in pillow.

Perhaps adjectives such as ‘super-soft’ and ‘pillowy’ are thrown around far too often to be taken seriously. Either that, or the description of the Glycerin takes place in a very narrow context. For example, when compared to the bricky Asics Nimbus, even a piece of wood would feel pillowy soft.

Only three midsole foams are accurately described by those labels. That’ll be the adidas Boost, Nike ZoomX, and the Reebok Floatride. The deep cushioning of Hoka’s and other exceptions apply. Everything else, be it the Asics Flytefoam, Brooks DNA Loft, or the Saucony Everun are medium-soft at best, at times even firm.

The Glycerin has its strengths. As Brooks’s top-tier neutral trainer, it has all the creature comforts expected of a shoe which is expensive enough to dent your credit score. The upper is very plush and secure; the DNA-LOFT midsole blends smooth cushioning with support.

At the same time, the ride isn’t super soft, never mind the misleading advertising. Is it plush? Yes. But ‘super soft’ and plush are two very different things.

But what of the Glycerin 17? A new Ortholite insole replaces the molded kind, so that must make a difference, no? The blown foam insole creates a softer topping over the midsole. But once you get past that, the ride is exactly the same as the Glycerin 16.

So the $150 question is – should anyone who owns the Glycerin 16 spend full retail on the 17? In our opinion, that money is better utilized on another shoe which adds rotational value. 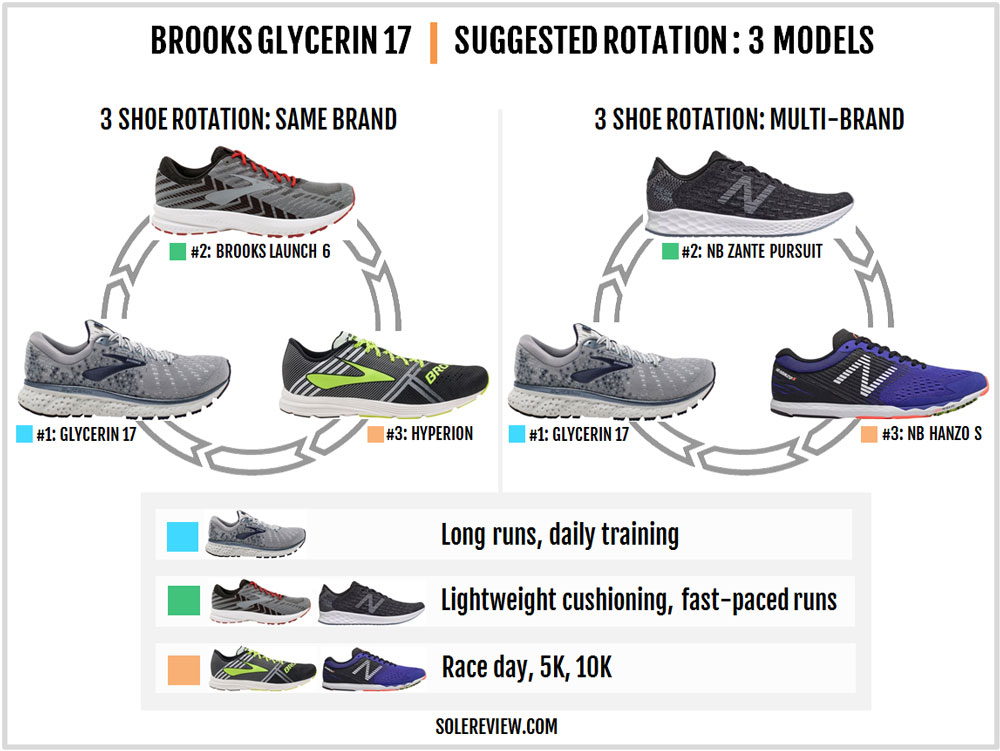 For instance, the Brooks Launch 6 is a firm trainer which suits faster paces. Even the Pureflow 7 works. If you require a speed-shoe with low profile cushioning, then the New Balance Zante Pursuit is great.

You can pool in the spare change and invest that in road racers like the Brooks Hyperion or the New Balance Hanzo. All while keeping your existing Glycerin 16 or acquire another pair at a marked-down price.

The Glycerin 17’s upper is new but isn’t necessarily an improvement; rather, they are just subtle changes. The G-17 takes away some bits and adds a few, and the net result is similar to the 16. The new Glycerin is marginally lighter than the previous model but still isn’t a reason enough to upgrade.

Before we get into the minutiae of the Glycerin’s ride quality, let’s discuss the new insole first. For a long time, the Glycerin used a smooth sockliner made of DNA foam – Brooks’s term for an EVA foam variant. The last year’s Glycerin 16 had it too.

The compression molded insole worked in tandem with the Super DNA midsole for several years. Since both foams were made of the same ingredient, the set-up made the ride smooth and consistent.

Even after the Glycerin switched to a DNA-Loft midsole last year, the insole continued to be a good fit. Neither foam was ultra soft, so the similar densities ended up working well together.

This year is different. Brooks opted for a softer, blown-foam Ortholite insole – the kind commonly found in New Balance shoes. As a result, the ride has softened slightly than the Glycerin 16, but only near the top.

Running shoe softness can be skin deep, after all. We’ve seen that play out on the New Balance 980 Fresh Foam all too well.

Nothing else has changed on the Glycerin, be it the full-length DNA Loft midsole or the outsole underneath it. The outsole is extremely well segmented by multiple rows of flex grooves under the forefoot. 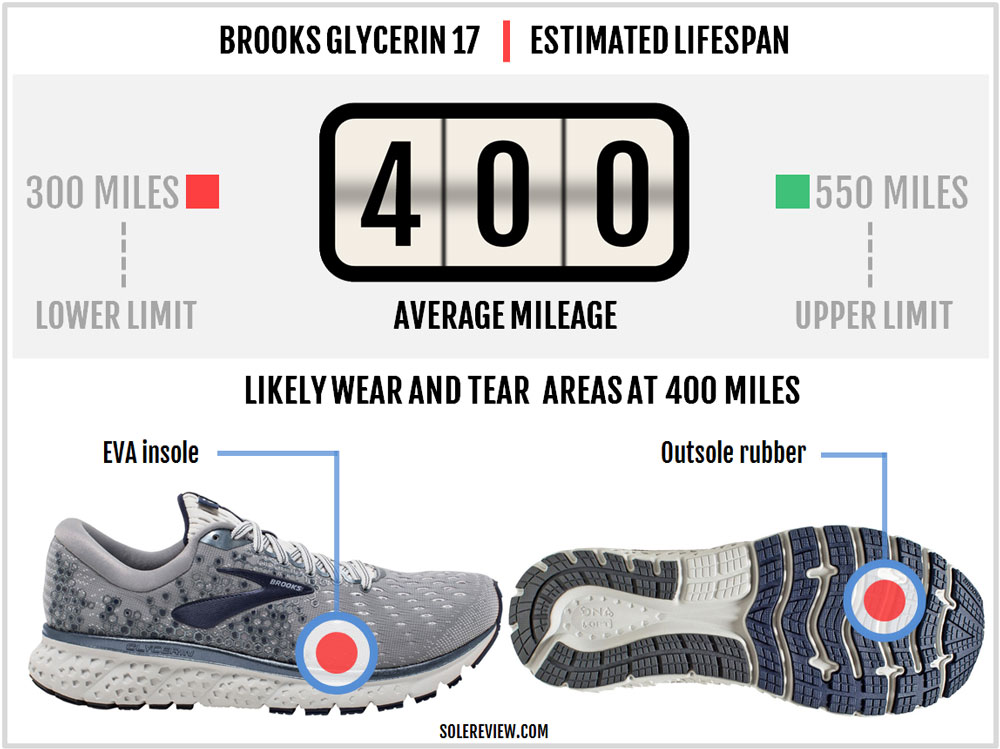 The sticky blown rubber has great traction too. The shoe feels solid throughout, the kind of build quality which should last 400 miles or more.

And if you have no experience with the Glycerin 16, what does the 17’s sameness feel like? 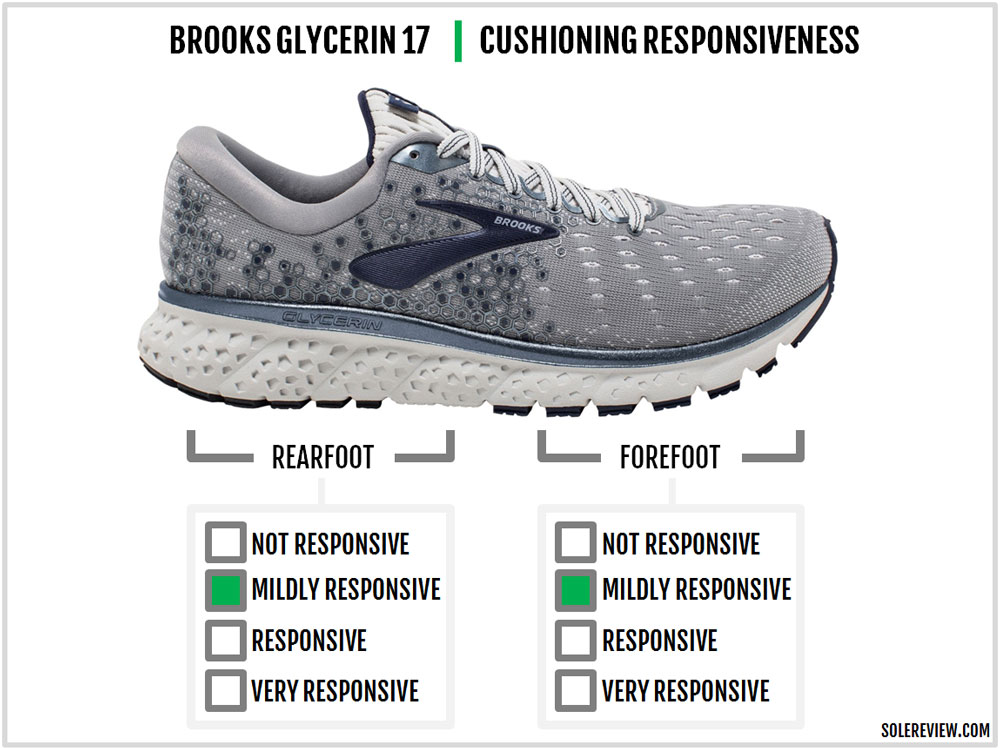 The Glycerin is not a super soft shoe, nor is there a sense energy return, responsiveness, or bounce – call it what you will.

Instead, the Glycerin 17 excels at what it does best – delivering a cushioned, smooth, and supportive ride without the flair of new age midsole materials. 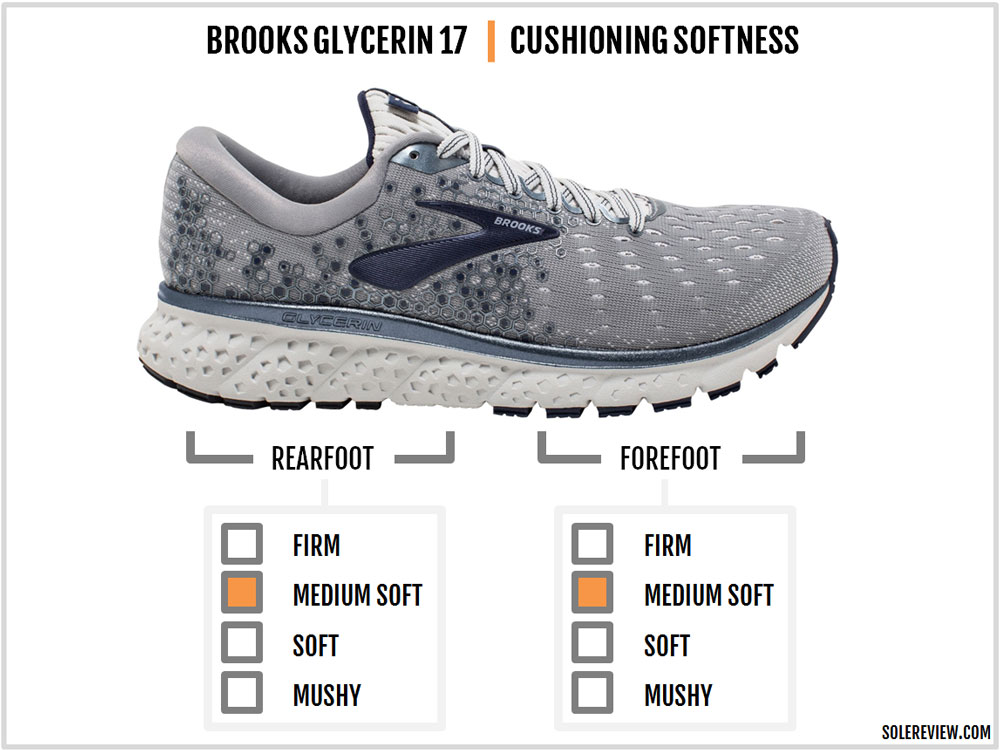 That assessment has been true for the series even if you turned back the clock to 2014 and ran in the version 10 which was unquestionably the ‘peak’ Glycerin.

Even with non-Newtonian DNA Gel inserts and whatnot, the Glycerin 10’s ride was firmer than then-existing versions of the Asics Nimbus and the Nike Vomero. 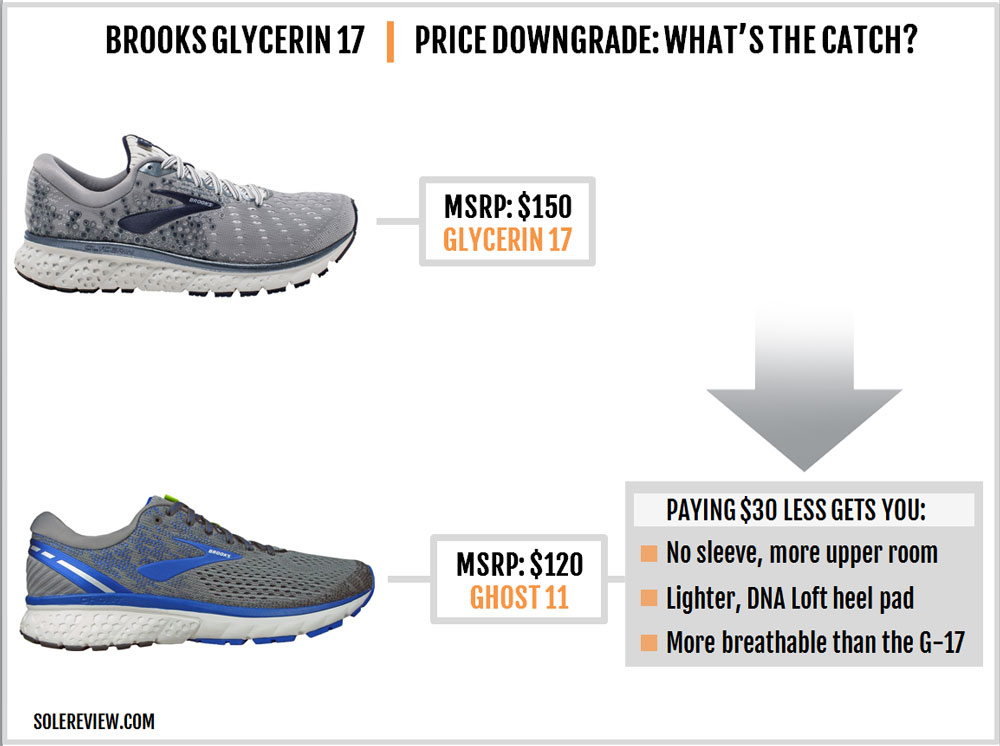 In that context, the Glycerin 17 is the archetypal Glycerin. The single slab of medium-soft DNA Loft keeps the ride smooth without any consistency breaks. Let us explain what we mean. Take the Ghost 11,  a lower-priced neutral trainer with a DNA Loft crash pad attached to a BioMogo DNA foam midsole.

While the Ghost 11 is an excellent neutral trainer, it lacks the smoothness of the Glycerin due to the dual-density midsole. It does, however, compensate with its lower weight. An ounce makes a lot of difference, so the Ghost ends up being more nimble than the G-17.

And that’s the only area where the Glycerin’s ride could be better at. The low level of energy return or ride softness isn’t a flaw, but being heavy certainly is. The Glycerin weighs 11 ounces, which is roughly an ounce over the category threshold.

The upper redesign cuts down on materials so the 17 is slightly lighter (less than a half ounce) than the 16. The forefoot is a bit more flexible – it’s likely the Ortholite insole at work because the midsole and outsole are identical to the previous model.

If you liked the Brooks Glycerin 16, it’s certain that you’ll like the 17. It’s a neutral trainer with friendly road manners. The DNA Loft might not be pillowy or anything of that sort, but it is very comfortable for daily training and long runs.

The 11-ounce weight doesn’t make the Glycerin the best choice for faster workouts but the silver lining is the weight distribution. The shoe doesn’t feel bottom heavy; the layered upper ensures that.

All these years, the plush fit and feel of the Glycerin was a given. Even less expensive Brooks shoes use premium materials when compared to competing brands, so the Glycerin always received the VIP treatment.

The upper goodness hasn’t changed on the Glycerin 17 – but let’s park that aside for a moment and examine the insides.

An important update which occurred on the Glycerin 16 was the introduction of a full inner sleeve. Editions preceding the G-16 had only a gusset holding the tongue which meant that the forefoot and toe-box were relatively spacious and airy. 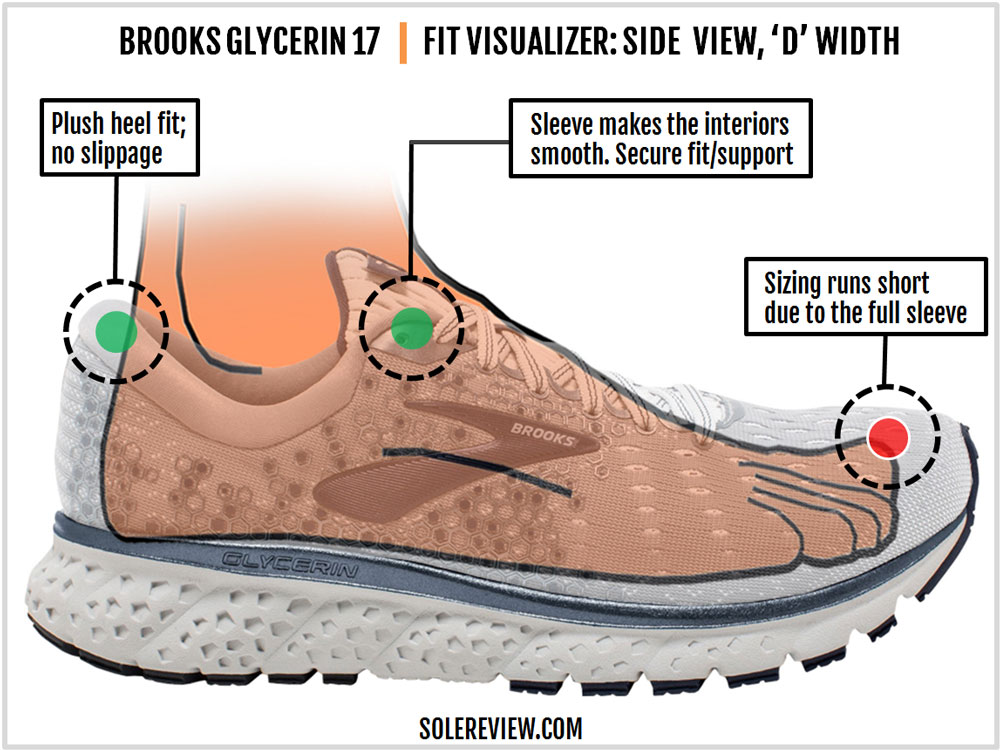 Plugging in a full sleeve led to reduced interior room and breathability on the 16. The same holds true for the 17. The upper looks spacious from the outside, but the interior fit doesn’t match the exterior appearance.

The toe-box lacks vertical wriggle room and the sizing feels crunched. If you need foot space which is the equivalent of the Glycerin 15, then it is better to buy a half-size larger. 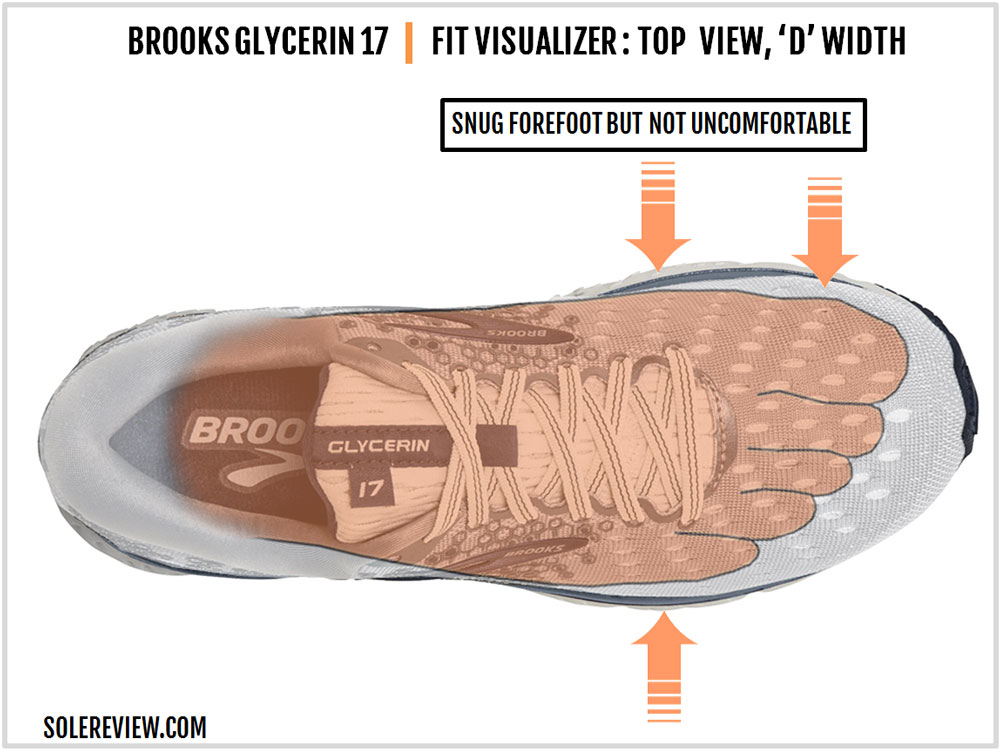 The amount of interior room hasn’t changed since the last year, so it is absolutely safe to stick to whatever size you got the Glycerin 16 in.

For the reasons mentioned, the Glycerin runs warm too – regardless of the outer engineered mesh with large vents.

The rest of the upper uses soft-touch materials. The plump heel collar filled with resilient foam functions together with the internal counter for a secure fit. The tongue is padded but doesn’t overdo the foam quilting. The latter is a part of the inner sleeve, so it stays put over the foot.

There are two noticeable updates made to the Glycerin 17. Brooks replaces another long-continuing component (the first being the insole) with another. The upper no longer have the round soft laces. Taking their place are flat, semi-stretch laces which look like they’re lifted from Saucony.

Nice job, Brooks. As it turns out, the Glycerin 17’s redesign strategy was very simple; borrow one component from New Balance (the Ortholite insole) and another from Saucony (flat laces).

Not that there’s anything wrong with flat laces. They cinch easily and remained tied; it is just that they look out of place on the Glycerin’s plump upper. Saucony shoes have always had that lean look, so the flat laces are a good aesthetic match. Brooks, not so much. You know what we mean?

The Glycerin 17 has a softer outer midfoot. The 16 had a thick, fused layering running vertically on the sides. The 17 gets the high-density printing treatment but the hexagonal detailing is spread in a wider area instead of being focused over the midfoot.

Even the outer heel is adorned with this cosmetic detail, and means that reflectivity is now packed into a single strip.

Redecorating the midfoot makes the sides softer. While the G-17’s midfoot has a secure fit, it feels slightly less so than the G-16.

A positive side effect of the midfoot redesign is weight. Even with an identical sole set up, the 17 loses nearly a half ounce over the 16. 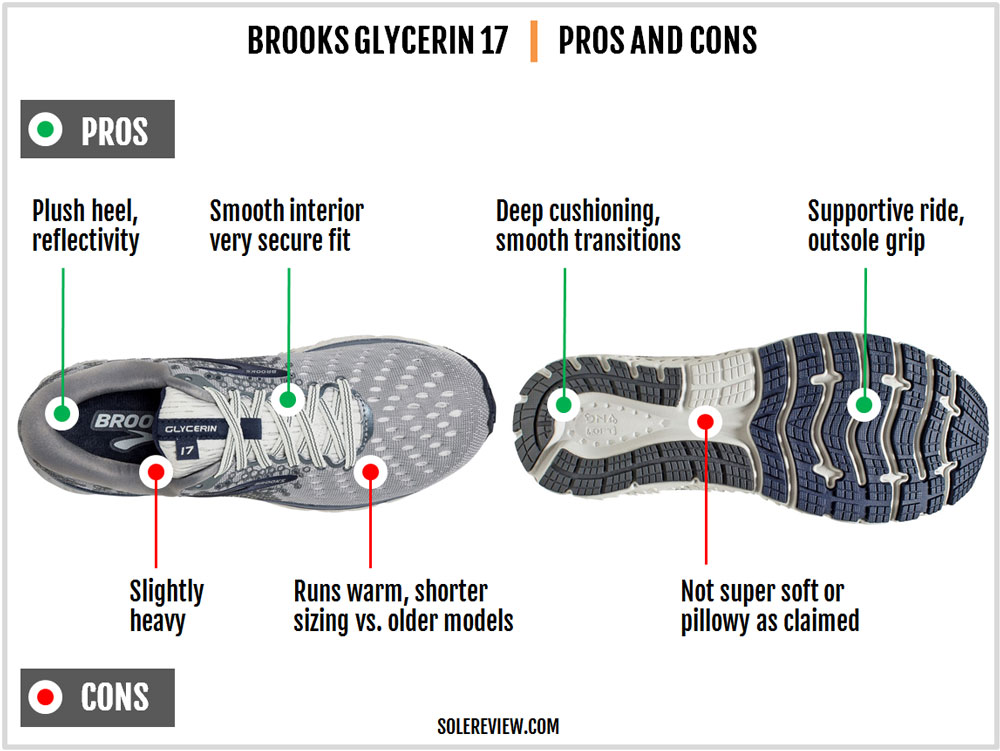 The DNA Loft foam is a letdown if you buy the Glycerin based on its ‘super-soft’ claims. On the other hand, the midsole offers a smooth and consistent ride with a sense of deep cushioning. The firmness also makes the shoe stable, and there’s plenty of traction on that segmented outsole.

The upper has a plush environment. The lock-down is very good too, except that the full inner sleeve makes the shoe warm. 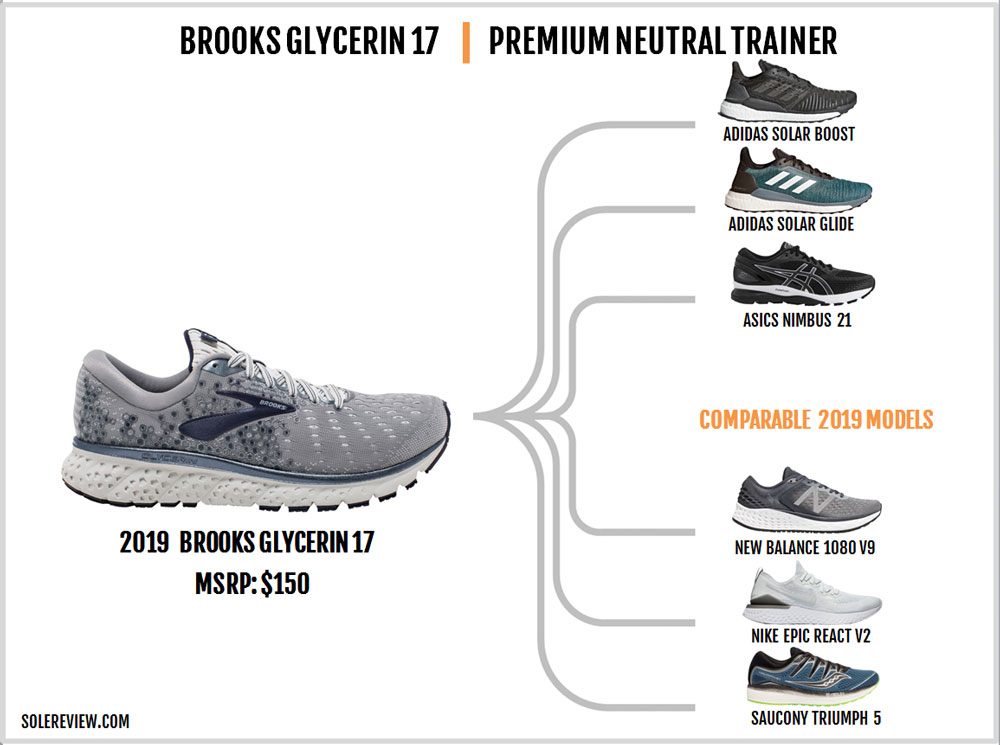 Running shoe categorization is anything but predictable. Labeling a shoe ‘premium neutral trainer’ means very little without context. The Glycerin 17 is in this category but so are all the shoes on this guide. And guess what, all of them possess distinct personas.

The adidas duo of the SolarBoost and Solar Glide have a very solid soft ride with markedly different upper fits; the Solarboost fits narrow while the Glide has more room than the Glycerin.

The Asics Nimbus hasn’t been the same since Flytefoam showed up. The Nimbus 21 feels wooden and dead, so there is little which the comfortable upper can do to help. New Balance has stepped up its Fresh Foam game with the 1080; the ride is soft and the cushioning deep. The 1080’s heel fit isn’t great so try before buying.

Saucony’s Triumph ISO 5 relies on a full-length Everun e-TPU midsole to deliver a dense and responsive cushioning. The lightest option here is the Nike Epic React 2. The React yields resilient, high-volume cushioning without sacrificing on weight or durability.