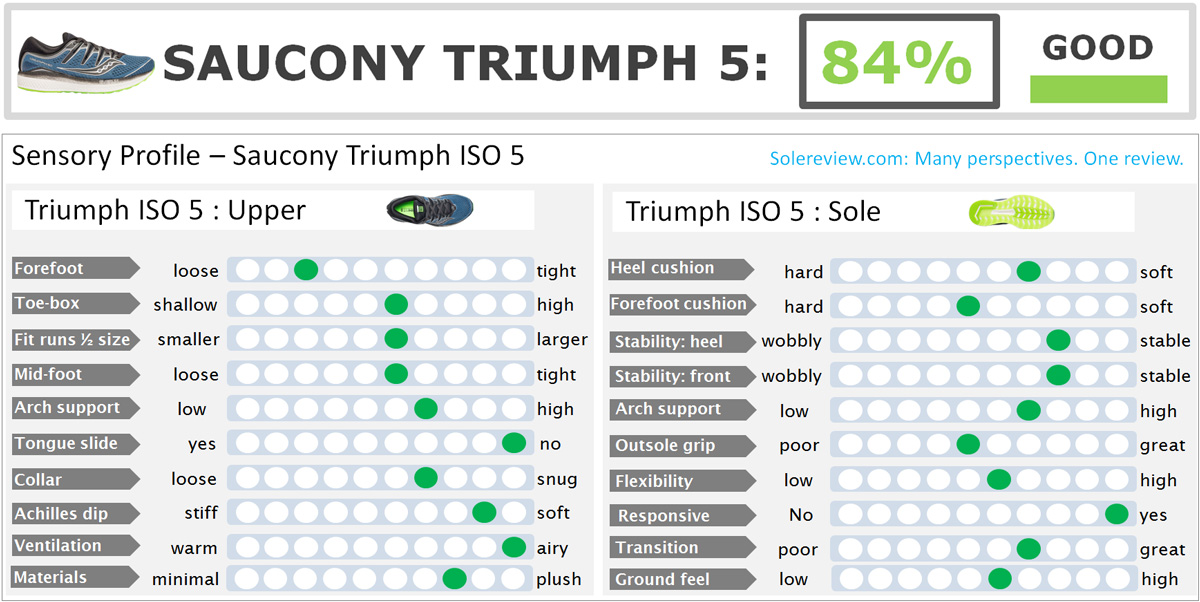 Saucony’s marketing pitch: Has more Everun underfoot than ever before to make your longest run fly by.

Saucony’s neutral trainer with a full-length Everun midsole gets a better fitting upper and a new outsole. It’s a heavy shoe with a very roomy fit, so know what you're buying.
Responsive and dense cushioning, supportive ride, improved upper, premium materials, durable outsole
Heavy, the outsole grip is found wanting on wet surfaces, expensive, D width is too roomy for narrow runners 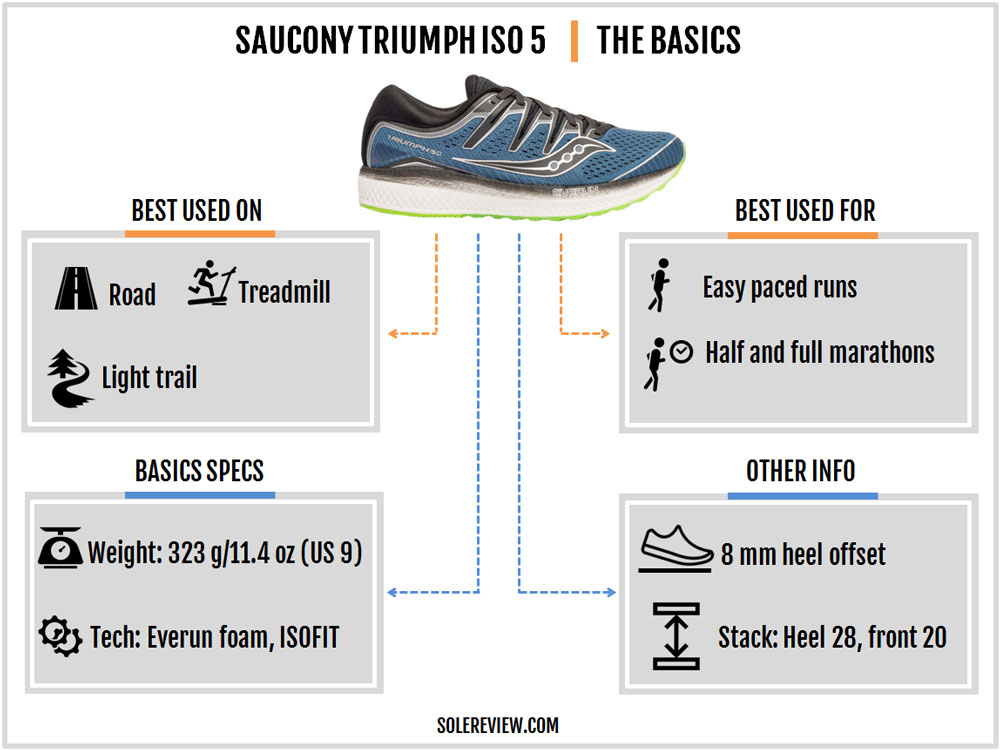 For those of you who are new to Saucony, the Triumph ISO happens to be the brand’s premium neutral trainer.

Price-wise, it is positioned above the popular and less expensive Ride, so the Triumph gets access to the brand’s top-of-the-line materials and cushioning tech. After all, it has to justify its $160 retail sticker.

The Saucony Triumph made its switch to an ISOFIT upper less than five years ago, and it has stayed anything but consistent. As far as the Triumph is concerned, Saucony has taken the adage ‘change is the only constant’ to heart.

The first Triumph ISOFIT didn’t have Everun. It was based on a plusher version of the Powerfoam midsole with holes punched (Powergrid+) on top. The ISO 2 followed the year after with an Everun crash pad.

The ISO 3 took another route and used Everun as a core material inside a firmer EVA midsole. The ISO 4 got its first full-length Everun midsole under an imperfect ISOFIT upper.

With so many changes across versions, a group of runners talking about the Saucony Triumph will have a completely different interpretation – depending on which edition they ran in.

The ISO 5 has plenty of updates over the ISO4. But at least, it retains the full-length Everun midsole – that too with favorable design tweaks. So there’s a strong sense of familiarity with the outgoing model, unlike the drastic changes between the ISO 1 to ISO 4. 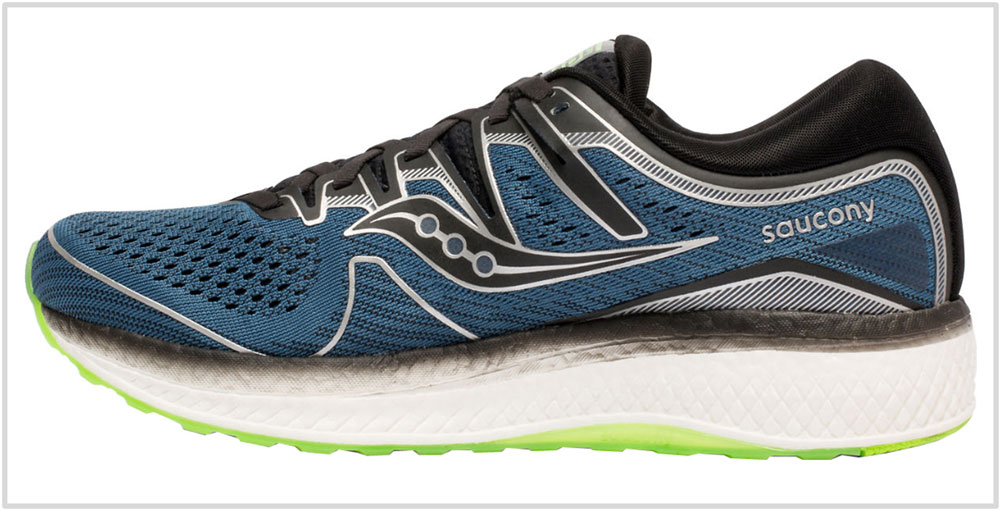 Let’s get the basics out of the way first. The Everun foam is made by molding expanded Polyurethane beads, thus making it the same base material as the adidas Boost – but without the sink-in softness.

Everun differentiates itself from adidas Boost by being slightly firmer. If you want a ride experience which is super soft throughout the midsole, then adidas Boost based shoes are a better choice. The Triumph has a molded insole and Everun Topsole over the midsole, but that’s just for step-in comfort.

The Everun midsole comes into its element when you begin running. Simply put, Everun needs to undergo through a certain level of stress to really shine through as a midsole material. 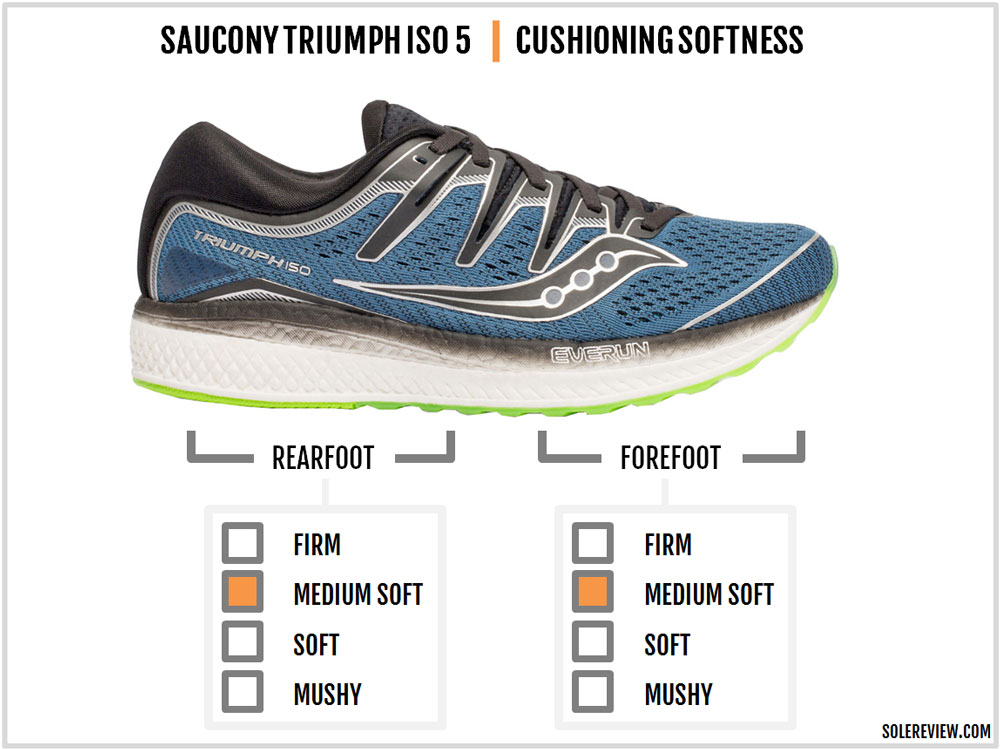 The Everun midsole has a dense and resilient cushioning quality. Because of the said properties, the Triumph ISO 5 is also supportive.

Unlike softer adidas Boost shoes which require stabilizing features such as side rims, the Everun midsole is stable enough on its own. There’s no compression bias, so this makes the ISO 5 suitable for heavier runners as well.

So what’s changed over the ISO 4? The midsole is still made entirely of Everun but with two important updates. Saucony trims a couple of millimeters off the rubber outsole and adds that to the Everun stack. Also, the sidewalls have a higher profile than the V4.

The outsole change is intriguing. The ISO 4 used plenty of blown rubber in the front with a hard-wearing landing zone under the heel. The ISO 5’s outsole still uses standard rubber – but only for the crash pad and forefoot center.

The rest of the surface is layered with a translucent ‘crystal’ rubber – the same kind which the Saucony Freedom ISO and Liberty use. This update affects three functional areas – the grip, lifespan, and the ride. 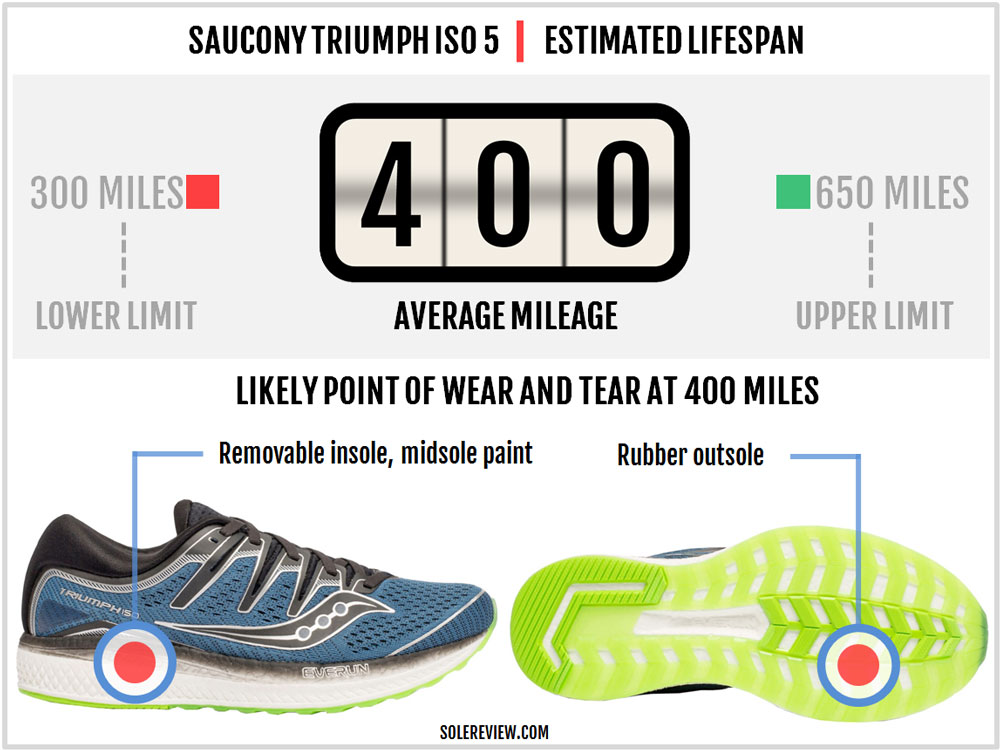 Crystal rubber lasts very long, nearly at par with the adidas Continental rubber outsole. From a durability viewpoint, this new outsole is a perfect fit for the long-lasting Everun midsole and the ISOFIT upper.

Traction is good – till the time you hit wet pavements. The crystal rubber isn’t as traction-friendly as blown rubber, so it is best that you limit your outings with the Triumph ISO 5 when it’s raining outside.

The thin outsole also improves the ride quality. While we’re not saying that the 11.4-ounce Triumph is a fast shoe, the Crystal rubber outsole makes the transitions smoother.

Not only does the thinner and firmer outsole bring the Everun midsole closer to the ground and increase responsiveness, but the flatter and balanced geometry also quicken the loading process.

Everun foam is exposed through small windows but in a way which differs from the ISO 4. Instead of the ISO 4’s longitudinal flex grooves, the ISO 5 makes use of small, micro-grooves placed in a sideways orientation. This lends the midsole decent flexibility while retaining structure.

The ISO 4’s crash pad had a deep flex groove which allowed break-away movement. The new outsole still has the groove but it doesn’t cut straight through. The area of exposed Everun foam under the rearfoot is narrower, and this makes the outsole more rigid. 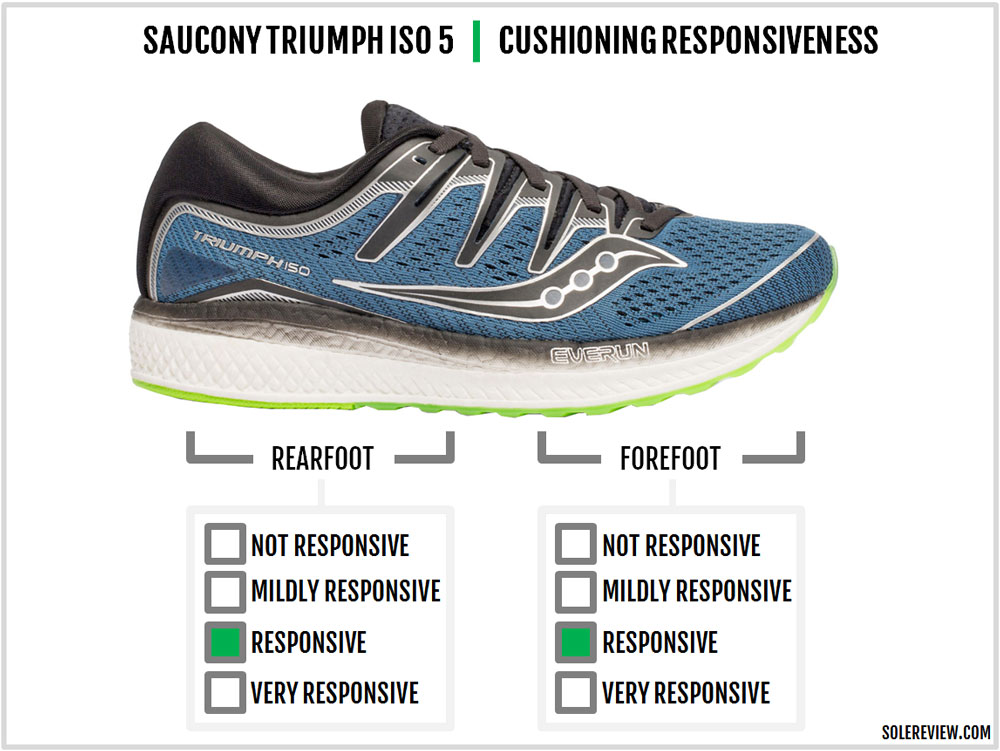 Responsiveness on the Everun isn’t the same kind as adidas Boost or Nike Zoom X. The foam isn’t bouncy due to Everun’s compact molding – but it is responsive.

The Triumph ISO 5 weighs 11.5 ounces for a size 9, which makes it pretty heavy. It is also bottom-weighted due to the Everun midsole; the ISO 5’s lighter upper makes the difference even more noticeable. 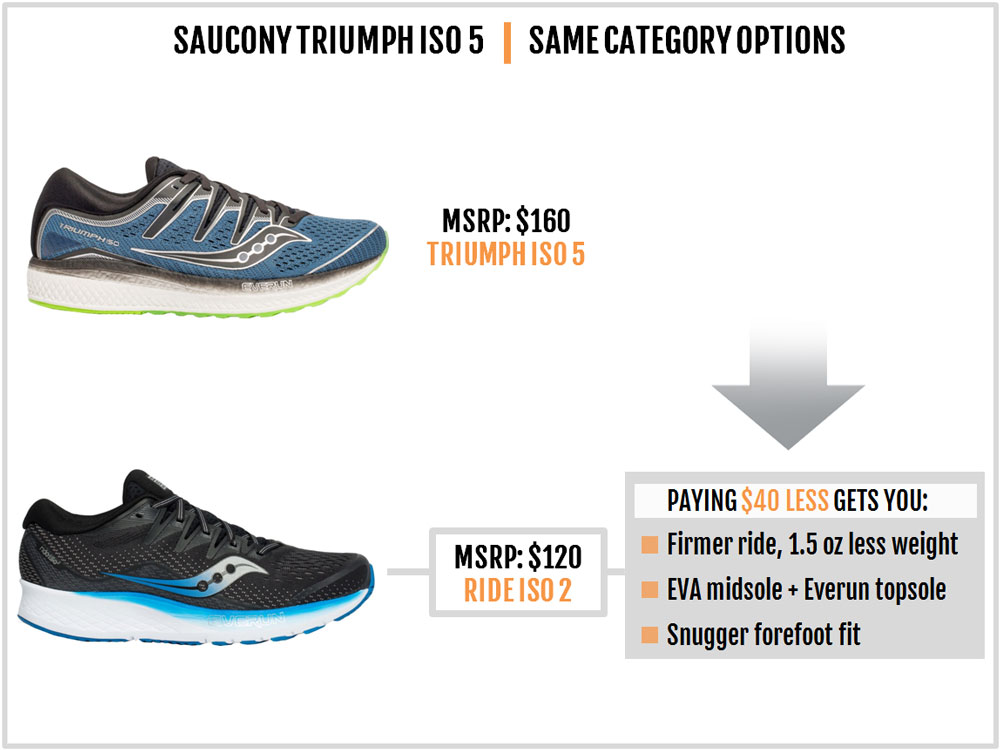 Given its cushioning and build profile, the V5 is best suited for long distance runs at easier paces.

If you’re looking for a lighter daily neutral trainer, then the Ride ISO 2 is a better choice for less. 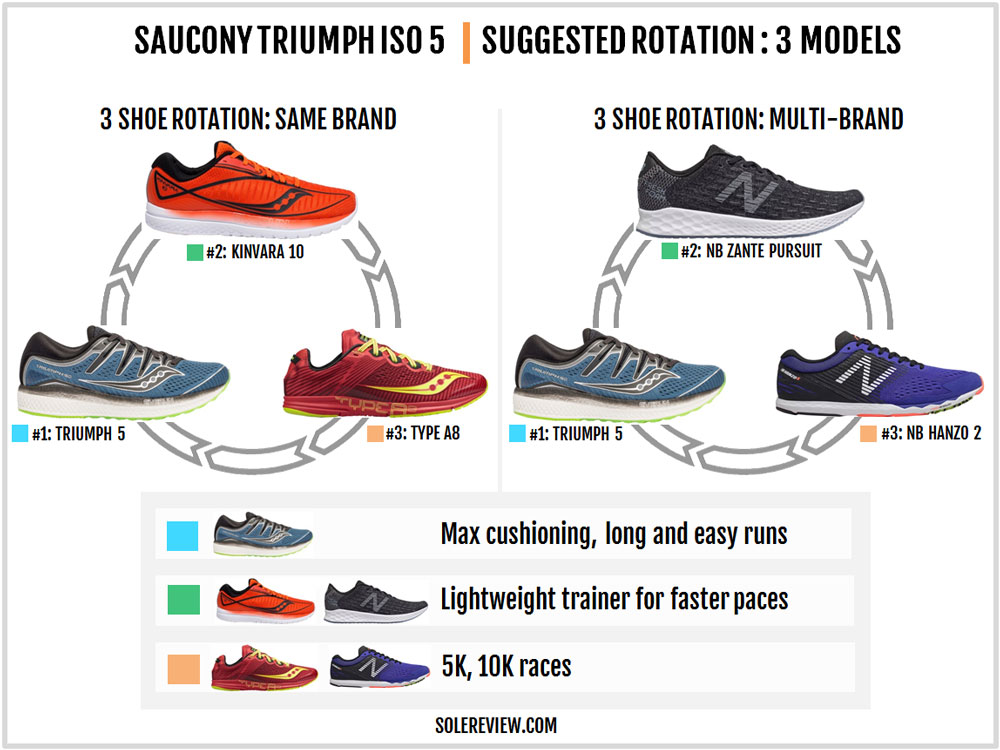 Besides the Triumph ISO 5, there are other shoe choices for different kind of runs. If you don’t mind a 4 mm offset, then the Saucony Kinvara 10 is a capable and versatile lightweight trainer.

We’re not sure what’s going to happen to the Breakthru after the fourth version, but the latter is currently an option. Else, the New Balance Zante Pursuit is an excellent lightweight running shoe for fast training. The Saucony Type A8, New Balance Hanzo S V2, and New Balance 1400V6 happen to be great race-day shoes.

We didn’t like the ISO 4’s upper at all. The fit was long in the front while the midfoot felt narrow. There was this feeling of excess material all over the foot; the entire fit was baggy and didn’t feel right. To make matters worse, the shoe looked very busy.

The Triumph ISO 5 cuts down on the visual heaviness. Making the compact look happen is a combination of new materials and design. The forefoot and toe-box now use a breathable and lightweight engineered mesh. The external toe-bumper is replaced by an internal one.

The midfoot and the heel loses the mesh molding and the synthetic layering. The ISOFIT strapping system and the tongue also receive important updates, one which makes the upper fit better.

The ISOFIT straps no longer form a lacing loop. The eyelets are punched into the synthetic, just like the first generation Triumph ISO. The tongue design gets simplified and feels thinner, all while being a part of the inner sleeve. The tongue flap substitutes the padded, puffy section of the ISO 4 with a small label.

While the toe-box and the forefoot get a generously ventilated section of engineered mesh, the midfoot has a more supportive knit design. Even the Saucony logo is used on the inner side for added structure. 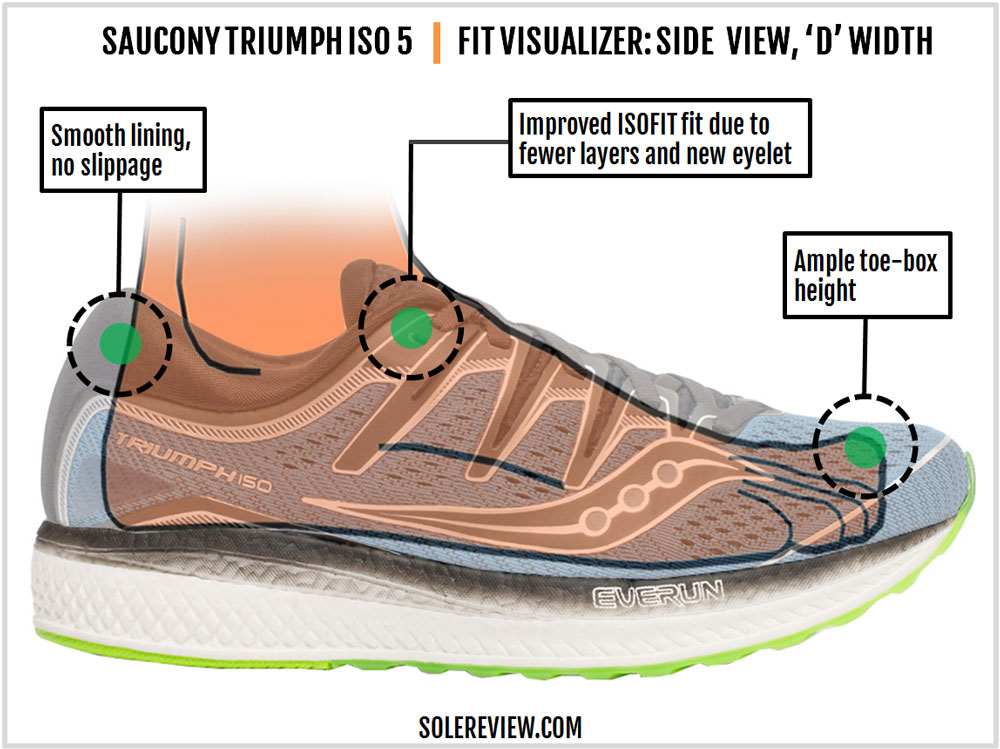 Not only do these updates make the upper look more streamlined, but they also improve the fit. One doesn’t get the sense of the excess materials and the bagginess of the ISO 4. The inwardly leaning heel also helps correct the long-ish interior (of the previous Triumph) and makes the ISO 5 fit true-to-size.

The redesigned heel collar is constructed using a single kind of mesh as compared to the last year’s dual-fabric lining. The lack of a seam and the inward heel curve reduces the play and moves the foot slightly towards the front. This tweak makes the fit just right. 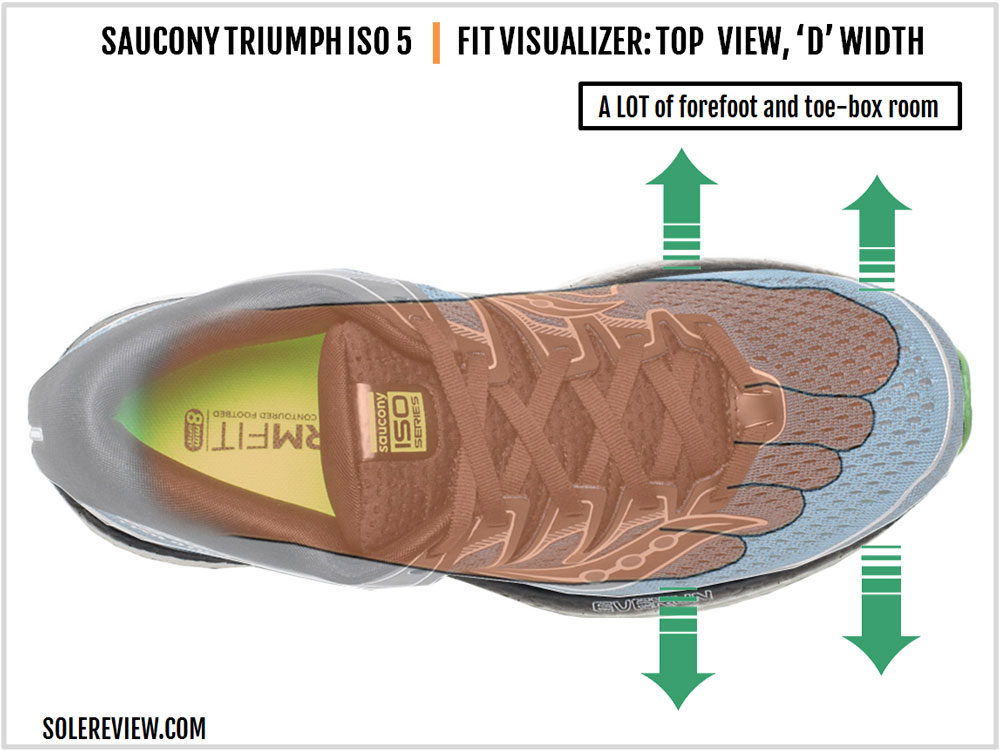 There’s a caveat. The ISO 5’s new forefoot mesh is soft and better at accommodating the foot. This makes the forefoot and toe-box very wide, almost as if the standard ‘D’ was a 2E instead.

So if you wanted a cavernous interior, you’re in luck. But if you have narrow feet, then the Triumph ISO 5 might not be the right running shoe. 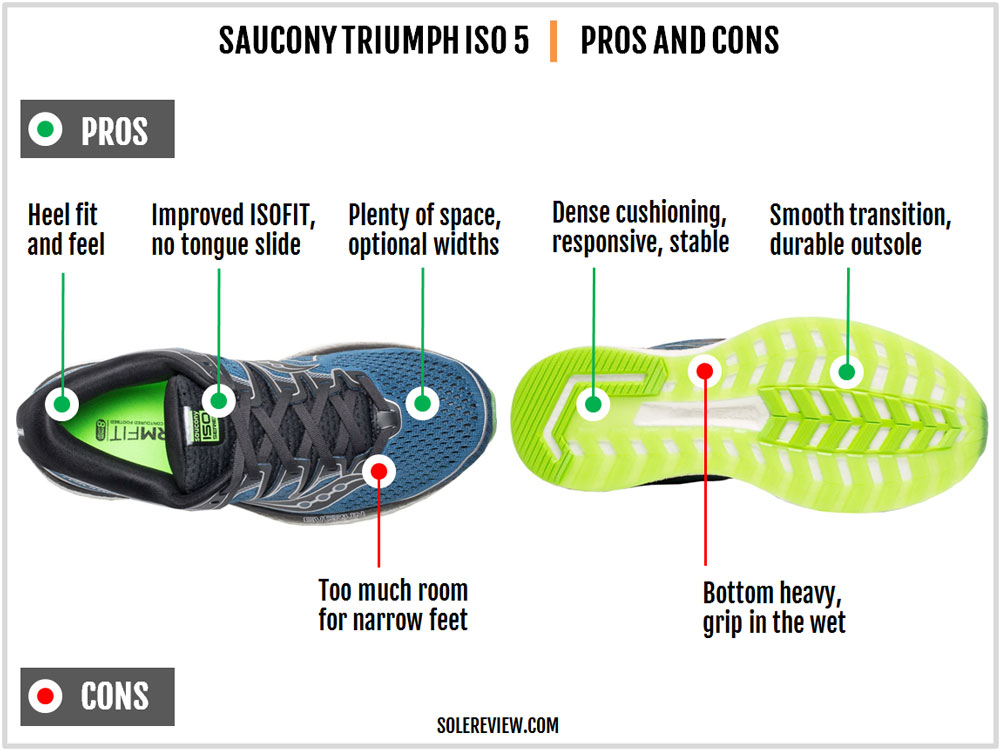 The Triumph ISO 5 is an all-around improvement. The better designed ISOFIT midfoot sits flush over the foot and the smooth interior feels premium. The new mesh makes the upper very breathable too.

There is a lot of room inside the forefoot – but could this be too much of a good thing?

The 11.5 ounces of foam and rubber give you a lot of dense cushioning, responsiveness, and support for the longer miles. The transitions have improved due to the new (and more durable) crystal rubber outsole, though the level of grip on wet surfaces isn’t great.

The bottom-heaviness of the midsole is still a thing, unfortunately. 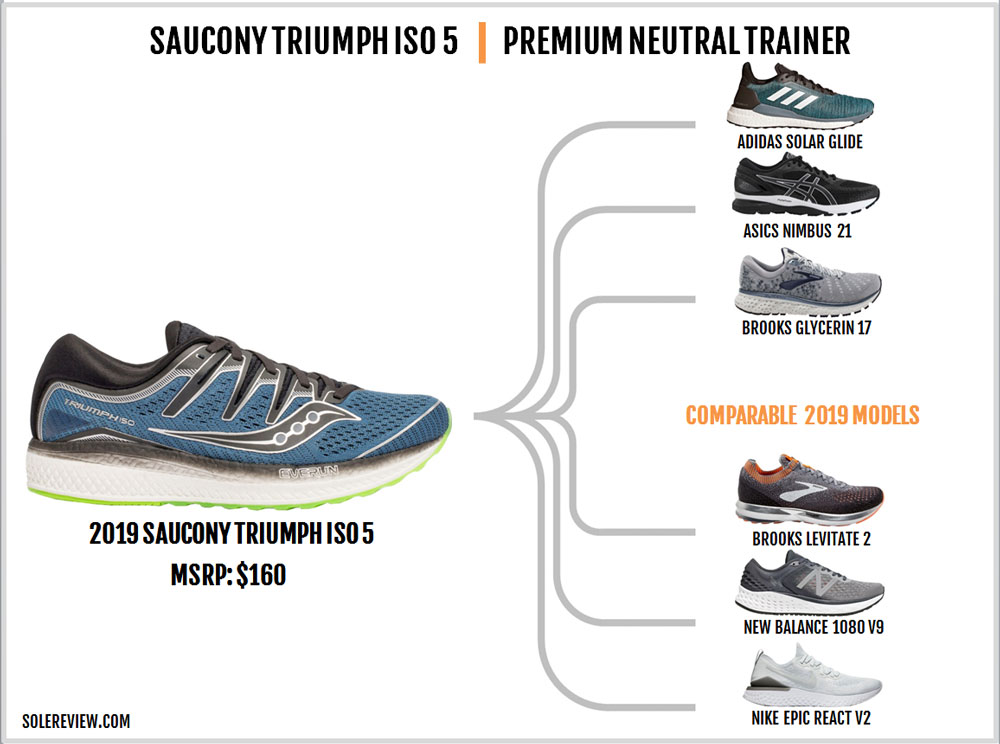 The Brooks Glycerin 17 is made of an entirely different midsole material. But it shares the cushioned and supportive ride character which the Triumph has. It’s got a plush upper and weighs nearly the same as the Saucony shoe.

Another Brooks product which compares with the ISO 5’s dense and responsive cushioning is the Levitate 2. The ride has a different flavor, one that has a high degree of vertical responsiveness.

There’s no reason you should buy the Asics Nimbus 21 over the shoes highlighted in this section. The ride isn’t special at all, and nor is the upper. Avoid it unless you have to buy a pair of Asics.

The adidas Solar Glide uses an expanded Polyurethane foam similar to the Everun except for a softer composition. The lower density also gives adidas Boost more bounce. The upper is spacious but its stiffness requires some time to break-in.

The Nike Epic React 2 compares with the Triumph only for its denseness of cushioning. In other areas like weight and upper fit, the Epic is an entirely different product. The Nike shoe is several ounces lighter and has a snugger upper.

Lastly, if you want simple but a soft and deeply cushioning experience, then the New Balance 1080V9 is an excellent choice. The Fresh Foam midsole now behaves the way it should – which is being a soft and lively platform suitable for long-distance runs.