When you make a purchase using the retailer links in our reviews, we may earn a small commission. As an Amazon Associate, we earn from qualifying purchases. Solereview does not publish sponsored content nor receive free samples. We usually buy products at full retail price.

Intended use: All runs except in bad weather.

Buy from Ebay.com
Comes with a dual density midsole and aggressive outole lug design, making the ride much more responsive and cushioned than other GoRun models. Upper fit is good - only if you use the optional insole provided.
Skechers GoRun Ride 3
Lightweight, responsiveness, price
Heel (in)stability 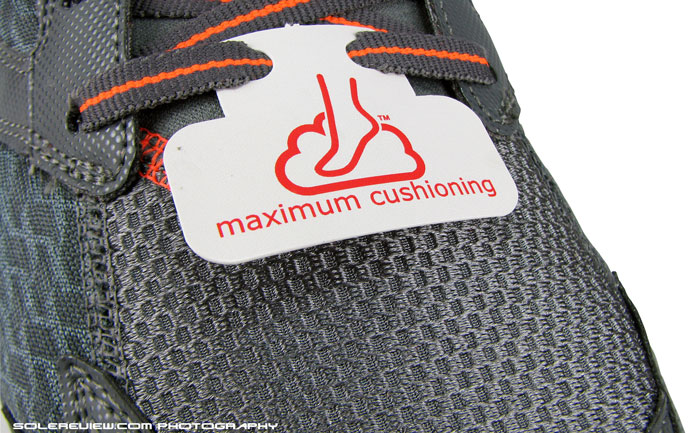 The GoRun Ultra is intended to be cushiest of all Skechers, with its dual density midsole set-up.

Within the Skechers universe, the GoRun Ultra happens to be one of four performance running staples, the other three being the GoRun Ride 3, GoRun 3 and GoMeb Speed 2. The Ultra is positioned as a GoRun with maximum cushioning, also offering a level of terrain versatility missing in rest of the GoRun models. If you’re coming off fresh reading our GoRun Ride 3 review, then some parts of this review will be a Deja Vu of sorts, as we run through similar design elements on the Ultra. At the same time, there are features which separate Ultra from the pack, which in turn influences how it behaves under usage.

The grey foam is softer than the firmer base it lays stacked on.

Key area of difference lies in how the Ultra’s sole unit is constructed. Instead of having a single density EVA midsole, the GRU has two layers of foam stacked over one another. On top lies softer foam (Resalyte), and lower midsole is another layer of foam – much firmer and also forming the outsole. There is no rubber at all on the Ultra, leaving all traction duties to the foam which Skechers calls Resagrip. The lug design is also very aggressive, making it suitable for both urban and non-technical trail running. We’ve noticed that Ultra’s foam outsole fares much better on durability than the softer foam based GoRuns; the harder compound is more capable of taking abuse. Also have to consider the fact that the lugs are much smaller and well spread across in a full-contact configuration, as opposed to having partially recessed pillars (GRR 3) – this distributes wear and tear more evenly. 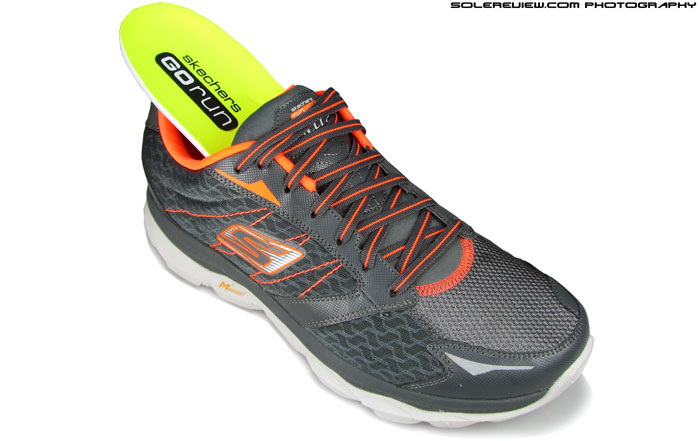 The GoRun Ultra has a responsive ride when placed next to other models in the line. Better served with the optional insole – they come packaged with the shoe.

As a consequence, cushioning is far more responsive than softer foam based Skechers. Even without using the removable insole, the combination of soft and firm midsole foam add levels of springback. There’s some help from the longer lug length of firm Resagrip outsole, with each of the Golf Spike-shaped pillars acting as independent foam pistons. Pop the insole in, and it further enhances levels of responsiveness. The flip side is that the Ultra lacks the easygoing nature of Skechers’ next-in-line cushioned model, the GR Ride 3. This means walking around or doing slow runs in the Ultra will not feel as padded as the Ride 3. The Skechers GoRun Ultra feels best for longer run durations, and at medium to fast running speeds. Impacts are absorbed effectively, and the midsole construction’s responsive nature makes it a better candidate for tempo workouts. 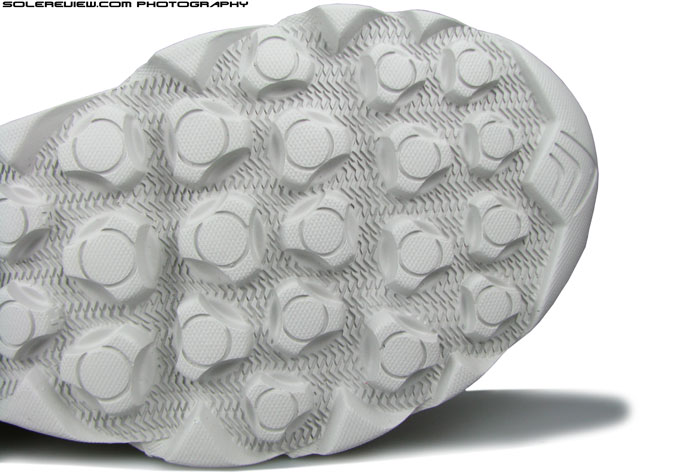 Full contact angular forefoot lugs. There’s a deep flex groove under the metatarsals, which makes flexing a bit of a workout. 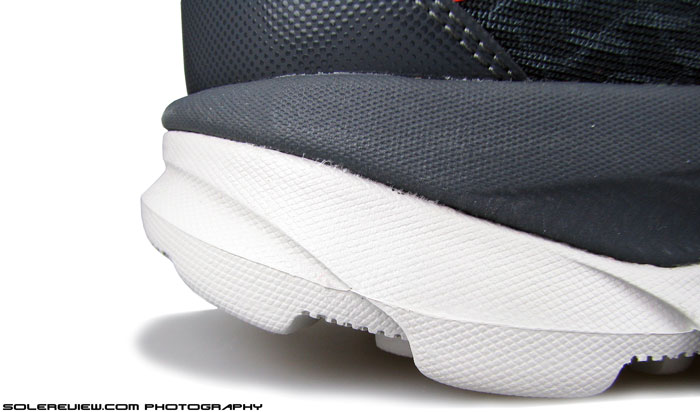 Forefoot is stable, as a number of full ground contact lugs spread weight and grip over a wider area underneath. That said, forefoot transition turns out to be bit of a foot workout. The Ultra has these very deep flex grooves just under the metatarsals, so while flexibility is good, it feels that the foot has to work hard to stretch the midsole material, instead of just rolling over towards toe-off.

Heel section has Skechers’ trademark ‘Mstrike’ design, visually characterized by the heel section curving upwards, made with the purpose of shifting foot strike position forward. As pointed out in our GoRun Ride 3 review, this feature is capable of inducing a rear-foot strike instead of an acute heel strike, but nowhere near late-stage rear foot strike or forefoot strike  – something which Skechers refers to mid-foot strike.

We’re firm believers of the thinking that a major change in footstrike behavior is possible only with active involvement of the runner, and not by change of footwear alone. Unless you’re sprinting in a pair of track-spikes  – which is a different set of conditions altogether. 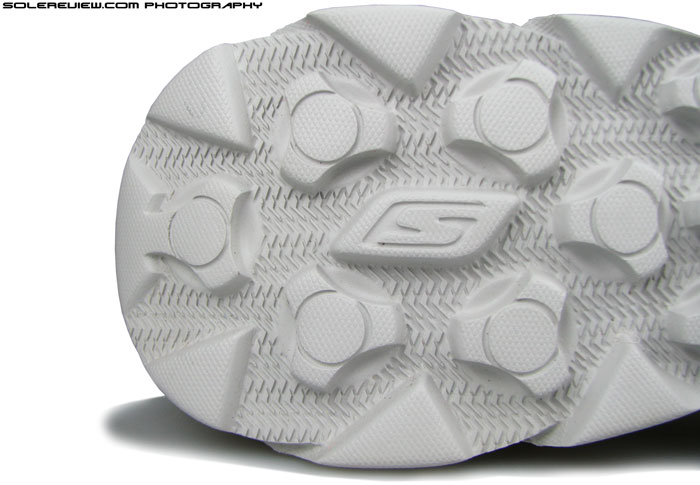 There’s a lack of stability at walking and lower running speeds due to the midsole bevel. The heel rests on the last pair of lugs, which causes a rocker motion.

Heel stability isn’t the best on the GoRun Ultra, especially at standstill and easygoing speeds. The sharp upwards heel flare results in a rocker sensation, where you feel the lack of support around the rear extremities. The GRR 3 also has a similar design, except that the lug design underneath is much more rounded and spread out – resulting in greater surface area. In contrast, heel loading on the Ultra tends to hinge on smaller, firmer lugs separated by deeper grooving. This creates a feel of sharper ‘hang’ and rear biased tilting. This isn’t so much of an issue once you pick up pace, and obviously will be of no consequence if you’re a forefoot striker. Backwards tilt and forefoot flexion aside, heel to toe transition is good, as multiple lugs help carry weight forward. Arch support is good if not great, as the midsole is filled up nicely underneath – no poking or pressure on the PF. 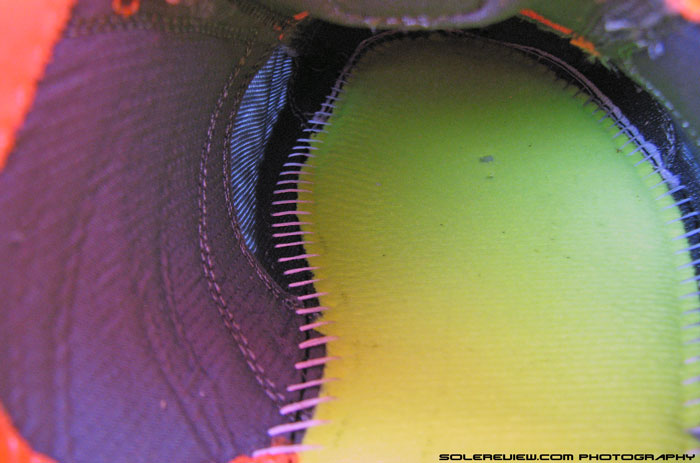 Upper lining is un-foamed and the padded Strobel is stitched to upper traditionally. Lacks the aesthetic finesse of the GoRun Ride 3 in that department. 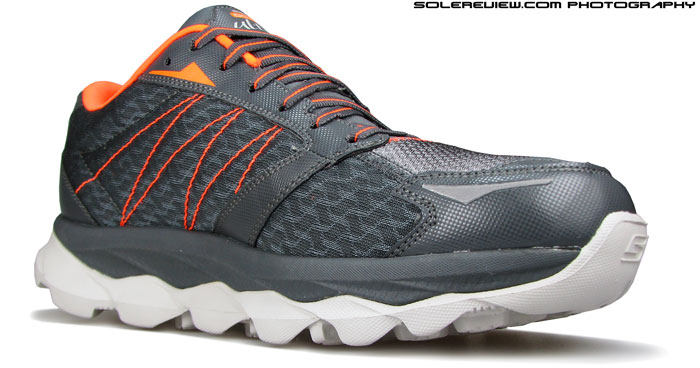 Compared to GoRun Ride 3, the other cushioned alternative, the upper fit feels more business like and focussed with the optional insole laid inside. The upper lining isn’t foam lined like the Ride 3, instead using a flat structured mesh. The midfoot panels are quilt stitched, making the shoe feel more ‘packed’ feel in which the materials feel closer to the foot. The front section of tongue is without padding, and the stretchy Spandex like fabric snaps snugly over the foot. Forefoot fit on either sides is more or less like the GRR 3, but the toe box is shallow – not because the last has changed, but of the way how the synthetic leather bumper is placed. The piece of synthetic at the tip is shorter in height, joining the mesh at a shallower point over the big toe. So it’s likely you’ll notice a greater degree of toe poke relative to the Ride 3. 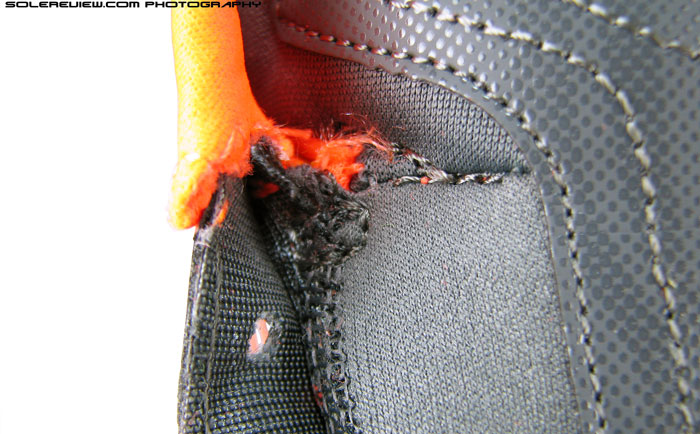 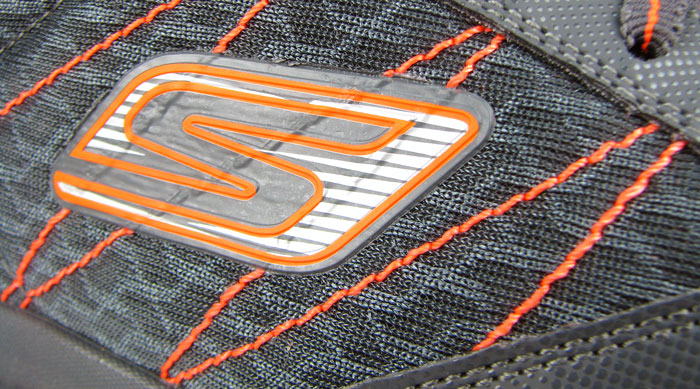 Midfoot fit is snug, as the Ultra makes use of a sleeved upper to wrap around the foot. This has the tongue stay put in its place, no slide here like the un-sleeved variants. The tongue fit stays optimum regardless of the fact you use the insoles or not. There was some feedback on the internet that the tongue tends to bunch up in absence of the insole, but we experienced no such thing. 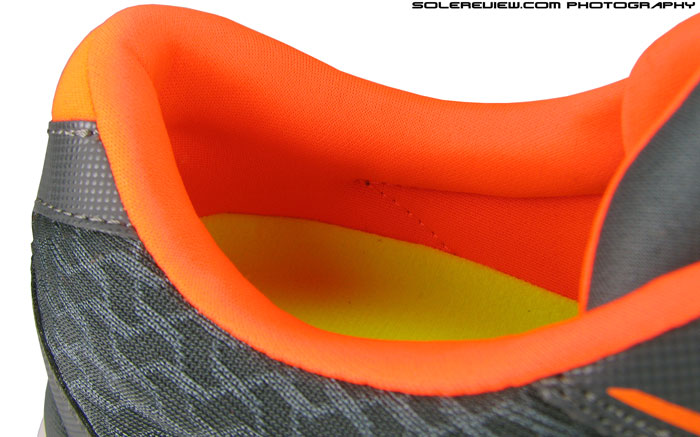 Collar is built up, with the Ultra preferring to use an internal heel counter like a traditional running shoe. Not that it affects the heel grip much; that is left to the collar, which offers good grip around the foot with the insole inserted. Take out the insole, and there a sense of slack around the ankles. As was our experience with the GoRun Ride 3, the shoe upper feels best with the insoles, with the overall fit and feel coming through as far more optimized. 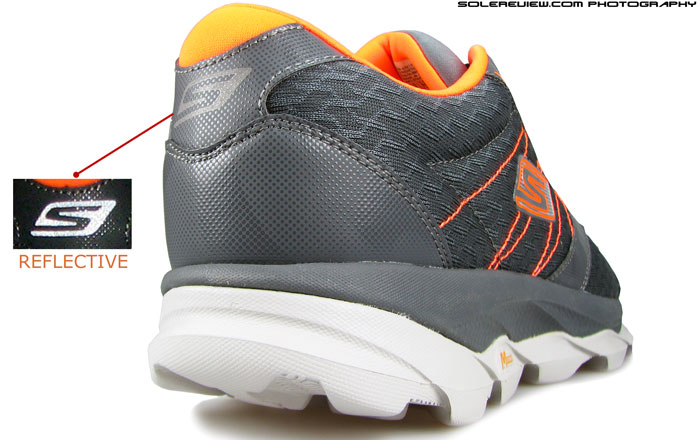 Reflectivity is used sparingly but is placed in important areas. There’re a couple of bits upfront, and the heel screen print is shine in dark type.

Overall, the Skechers GoRun Ultra is great value. At $80, it combines a sub 10 Oz weight with a satisfactory upper fit and responsive cushioning. We’d love to compare the Ultra with the Hoka’s but guess we’ll have to wait till mid October for that.

Note on ratings: Our numeric scoring of 8.1/10 is based on a total of weighted averages. The attributes namely transition, stability and fit contribute to 69% of total scoring weight, which we see as more important than material (7%), cushioning (7%), traction (12%) and weight (5%). Hence the scores will not add up when a method of simple average calculation is used. Also note that the ratings is based on using the Skechers GoRun Ultra with the removable insole. We felt that provided a better experience than without it, and hence formed the basis for our score.

Search
Our reviews and guides contain affiliate links which might earn solereview a commission if you make a purchase after clicking on those links.
As an Amazon Associate, we earn from qualifying purchases.