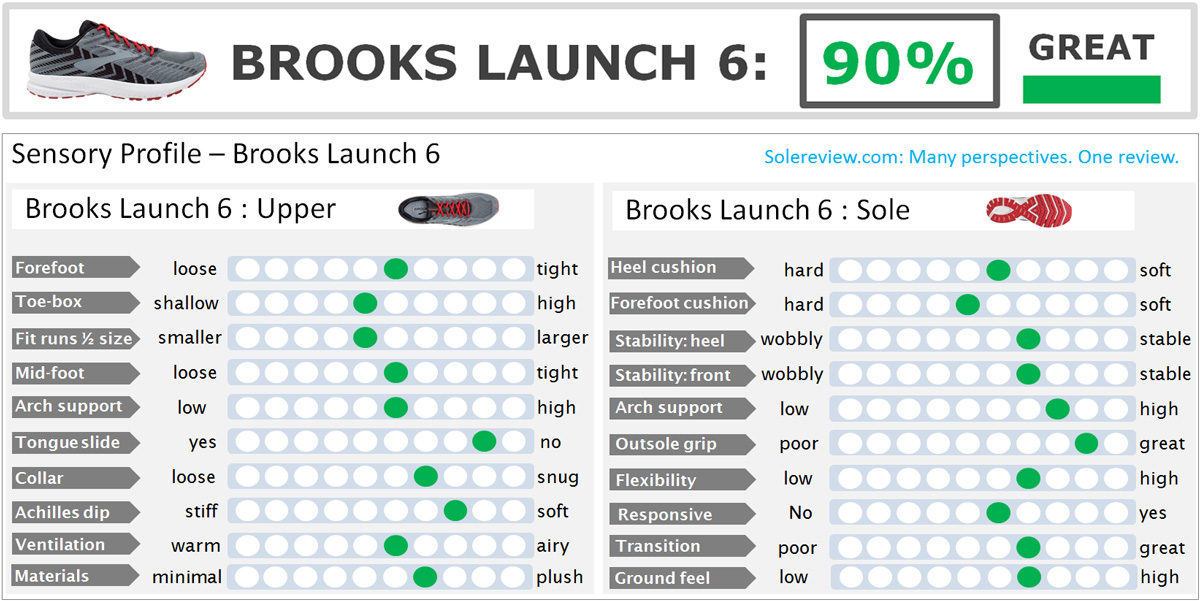 Brooks’s marketing pitch: Speed of a racing flat with the cushion and durability of a trainer 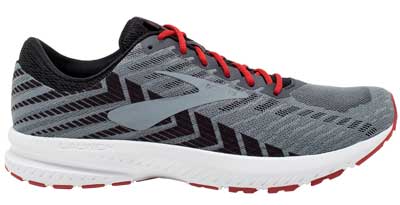 Buy from Jackrabbit.com
.Check price on Amazon
The Brooks Launch 6 isn’t your average neutral trainer. Its firm and thick midsole is good for fast paced runs without punishing your feet. Do note - this is NOT a softly cushioned running shoe.
Speed-friendly midsole, outsole grip, smooth interiors, true-to-size fit, reasonable pricing and weight
The firm ride isn’t for everyone. 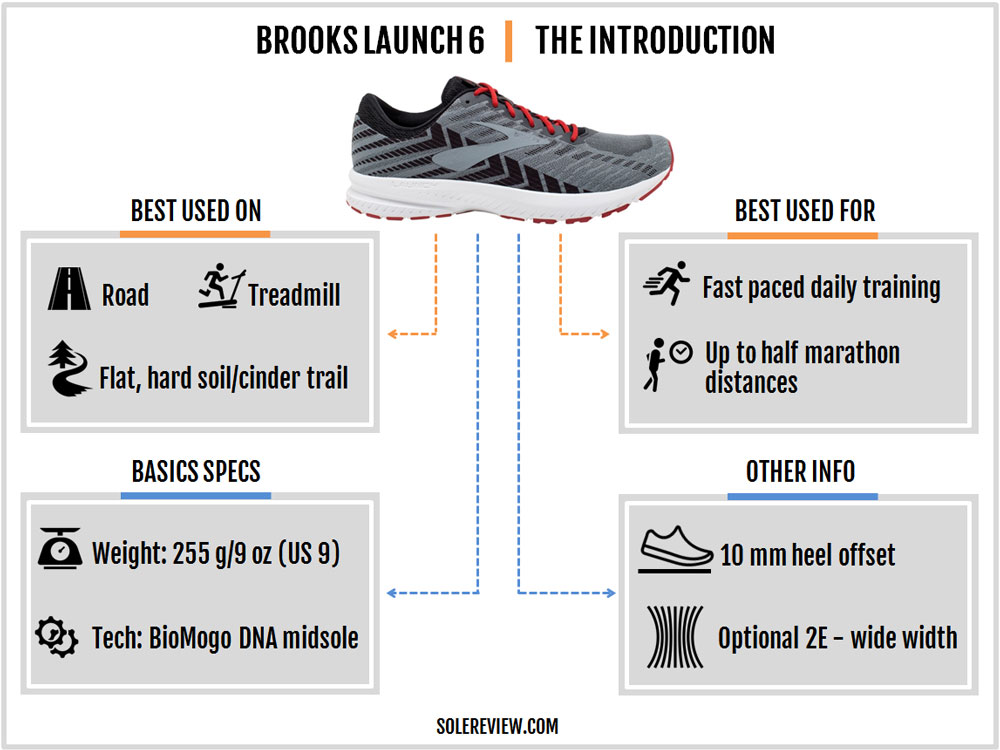 Soon after our Launch 4 write-up – a shoe which we rated highly – we got an angry email from one of our readers. He said that despite our high score of the Launch, the midsole felt ‘hard as wood’ and the shoe had to be returned.

The reason why we shared this anecdote is to tell you this – the Brooks Launch isn’t your average neutral trainer. We still think highly of the Brooks Launch 6 and have rated it thusly – but it is very important to know who and what this shoe is meant for.

To some, the Launch may appear as a less expensive version of the softer Brooks Ghost.

This is a neutral trainer with a firm ride, and it excels at being a shoe for speedier tempo runs – but without being hard on the foot as many in this category do.

At the same time, a speed-friendly ride doesn’t always come with firm midsole. In the following break-out, we walk you through other shoes in the same category which the Launch 6 belongs to.

It’s a good idea to browse some of the other potential options before buying the Launch 6. You’ll discover that there’s a lot of variety in the speedy-yet-cushioned segment.

SHOES SIMILAR TO THE BROOKS LAUNCH 6 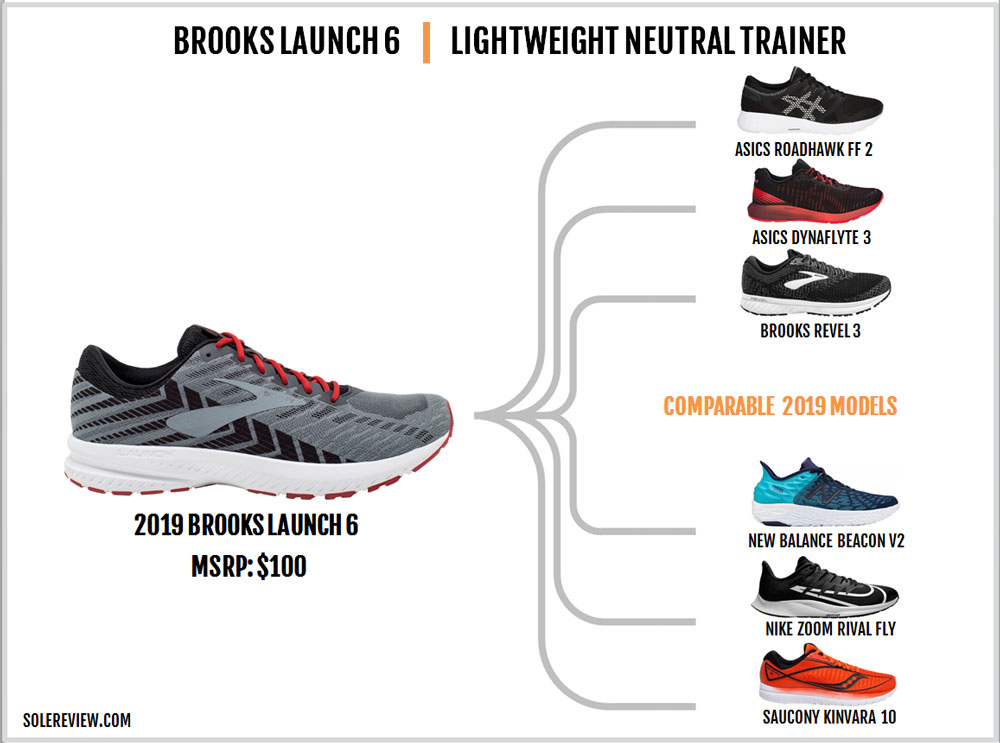 This part is important. Because if you don’t prefer the Launch’s high heel drop and firm ride, then know that there are plenty of alternatives. Take, for example, the New Balance Fresh Foam Beacon V2.

Not only is this shoe lightweight, but it also packs enough cushioning of a softer kind for long-distance runs. The Saucony Kinvara 10 also happens to have a cushioned ride with a comfortable upper fit. Both the Beacon and the Kinvara have a lower heel offset than the Launch 6.

Based on appearances, the Brooks Revel 3 looks similar to the Launch. It is, however, of a different shoe class. Its 8 mm offset midsole is noticeably softer and the upper has a plusher heel collar.

The Asics Roadhawk FF 2 is a relatively new shoe, yet offers a differentiated ride experience within Asics’s line. Except for the softer ride, the Roadhawk’s spec looks similar to the Launch. It weighs nearly the same and has an identical 10 mm heel-to-toe drop. For a firmer ride, consider the Asics Dynaflyte 3.

The Hupana isn’t your typical max-cushion Hoka but a firmer, 5 mm offset shoe which works for faster-paced training.

Nike’s under-rated Zoom Rival Fly competes with the Brooks Launch – both in price and overall character. This $90 lightweight trainer replaces the Zoom Elite, a shoe which was meant for fast training runs. 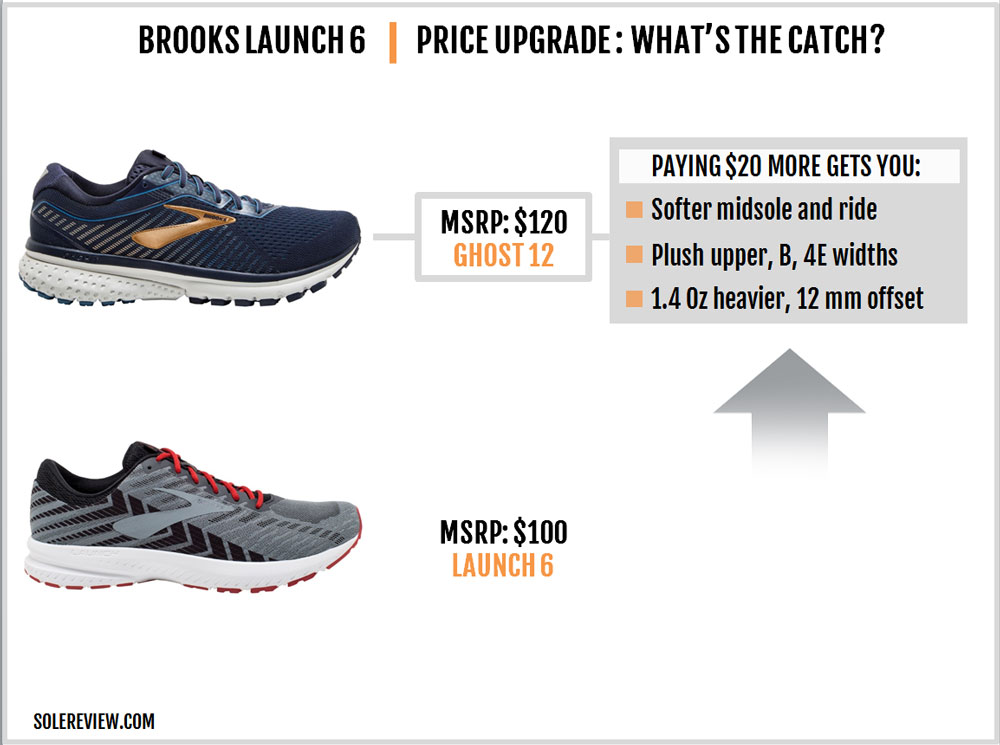 If you don’t like what you’ve read so far about the Brooks Launch 6 and would rather prefer a more comfortable shoe, then the Brooks Ghost 12 is the shoe you buy.

With the Ghost, you get a softer, more forgiving ride during high-mileage runs.

The 2019 model has been redesigned from the ground up. However, the magnitude of functional changes isn’t what you expect. There are small tweaks like the toned-down heel collar and tongue padding along with a new upper mesh. But by and large, the upper fit isn’t all that different. We’ll discuss this later during our upper fit break-out.

Carried forward into the new midsole and outsole are familiar traits from the Launch 5. Though the ride happens to be marginally softer, the overall underfoot experience is remarkably similar to the previous Launch.

The Launch 6 now sells in a 2E (wide) width – a helpful option which the V5 overlooked.

There’s a reason why this particular shoe is called the Launch. This is the trainer for fast-paced folks who prefer their running shoe to be firm but cushioned enough for the miles.

The term ‘cushioning’ has many parallels. In this context, it co-relates to a firm yet thick midsole which pads the foot from the landing forces. The Launch 6 does so without offering the midsole softness of models like the Ghost or Glycerin. 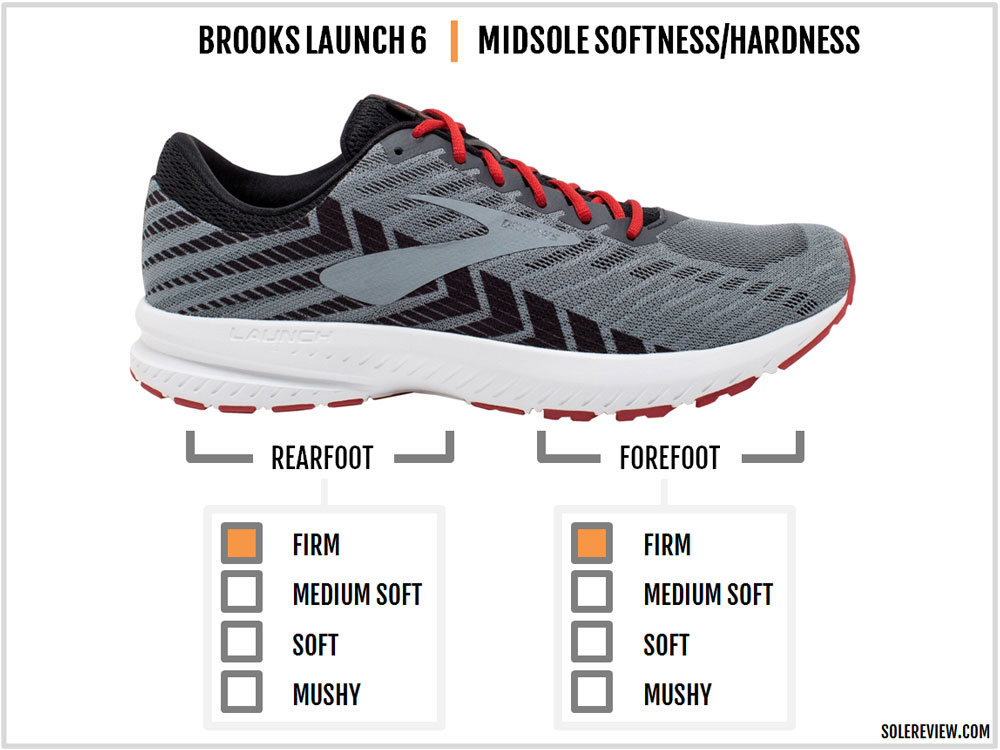 Discounting exceptions in the running shoe world, a firm ride usually works well when the pace heats up. And that’s what the Launch is good for. It doesn’t feel like a slouch at speeds higher than 7-min mile (5 min/km), a quality acquired through a midsole which doesn’t compress a lot.

Stability, as a result, is excellent too. Landings and transitions feel planted without any softness bias.

The compression groove under the heel has been on the Launch for some time now, the V6 has it too. Unlike many other neutral shoes which have the groove only on the outer side, the Launch’s grooving is equally deep on either side. This set-up gives the rearfoot a very neutral character.

The Launch is one of the few – or maybe the only – shoe(s) in Brooks’s line-up to require a break-in period.

Unlike the Ghost which is good to go right out of the box, it takes around 30 miles or so for the Launch’s midsole to ‘bed’ in. This firm midsole and the array of flex grooves need time to work together optimally. Yes, in a Mizuno kind of way.

Speaking of grooves, the outsole has plenty of them – and more so than the Launch 5. The heel crash pad is now segmented right up to the edge, and the forefoot has longer grooves in a Chevron orientation. Even the lugs have openings in them – likely to compensate for the thicker forefoot midsole.

That’s one of the two differences between the Launch 5 and 6. Besides the slightly thicker forefoot, the Launch 6 adds a foam lasting layer under the removable insole. The Launch 5 had an identical sockliner but the lasting/strobel was made of thin fabric.

So the Launch 6 is softer – just marginally so. Though the insole feels a mite cushier than before, it’s hard to tell the difference in the forefoot cushioning.

What you sense, though, is an outsole which seems to have a better working relationship with the midsole than the Launch 5. It’s the added grooving which does the trick. Even the ‘X’ shaped rubber section under the midfoot is more pliable and helps smooth the transitions.

The outsole traction is excellent due to the smaller, spread out lugs. Besides, the Brooks outsole compound has always been a grippy kind. 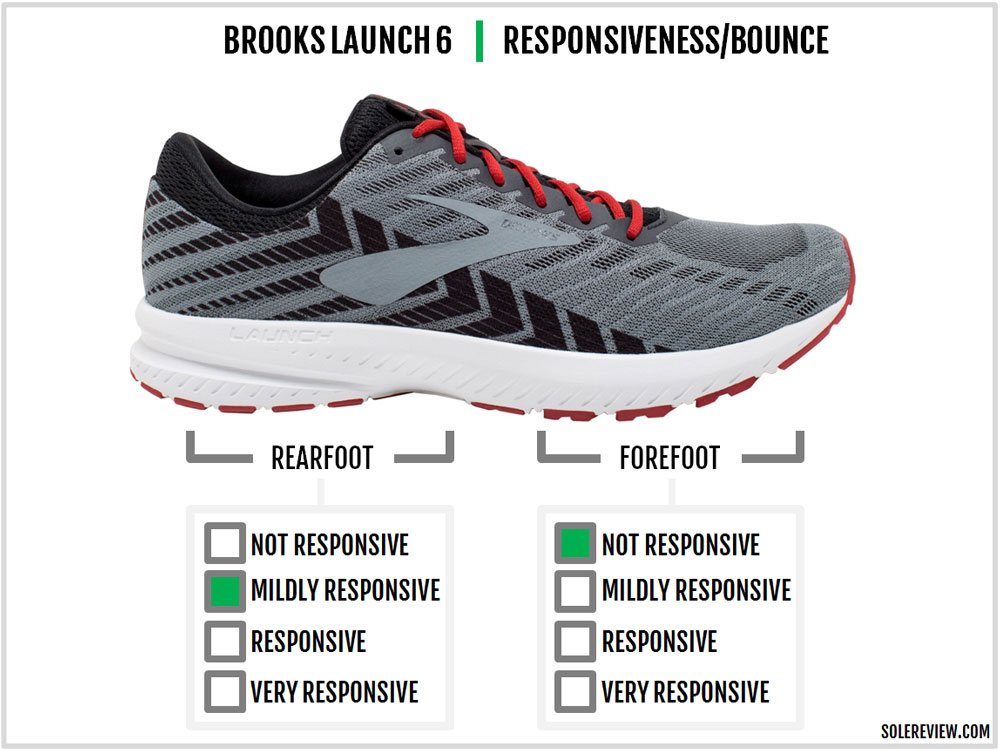 Despite the use of lofty advertising lexicon like ‘springy’, the Launch 6 isn’t responsive – at least not in the sense we know it. The BioMogo DNA midsole made of an EVA foam variant feels utterly flat.

The midsole feels a bit like the Nike Zoom Elite or the Structure without Zoom Air bags. You know that there’s a thick stack of foam absorbing the landing stress but there’s a conspicuous absence of ride plushness.

There is some rebound from the rearfoot groove and the area of exposed foam under the heel, but that’s all there is to it.

One should appreciate the Brooks Launch 6 for what it is. It is a relatively lightweight (9 oz/255 gms) trainer which makes fast runs possible without beating your feet down – the thick midsole sees to that.

Use the Launch 6 for daily training, 5K, 10K races, and half-marathons. You might want a plusher shoe for marathons though – the next section suggests alternatives. 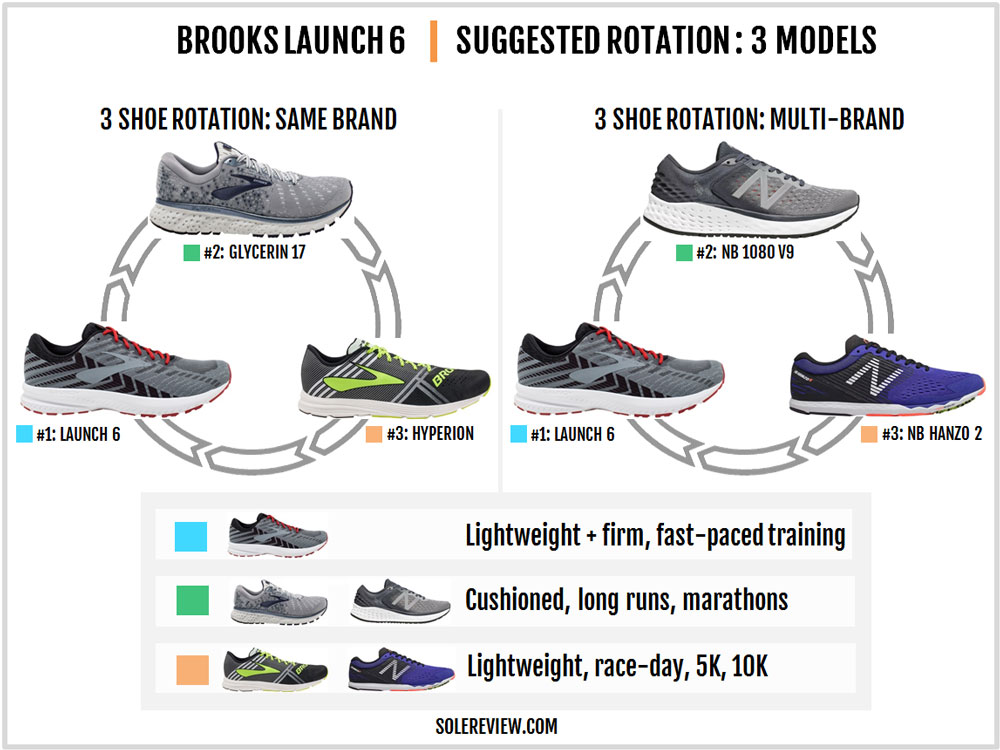 The Brooks Glycerin 17 is a sensible choice for long runs in plush comfort. For an even softer ride, the New Balance 1080V9 is highly recommended. If none of the two work due to their thick midsoles, the Reebok Forever Floatride Energy offers a high cushioning-to-weight ratio.

For runs and races at blazing paces, we recommend road racers such as the Brooks Hyperion and the New Balance Hanzo.

IS THE NIKE BROOKS LAUNCH 6 DURABLE? 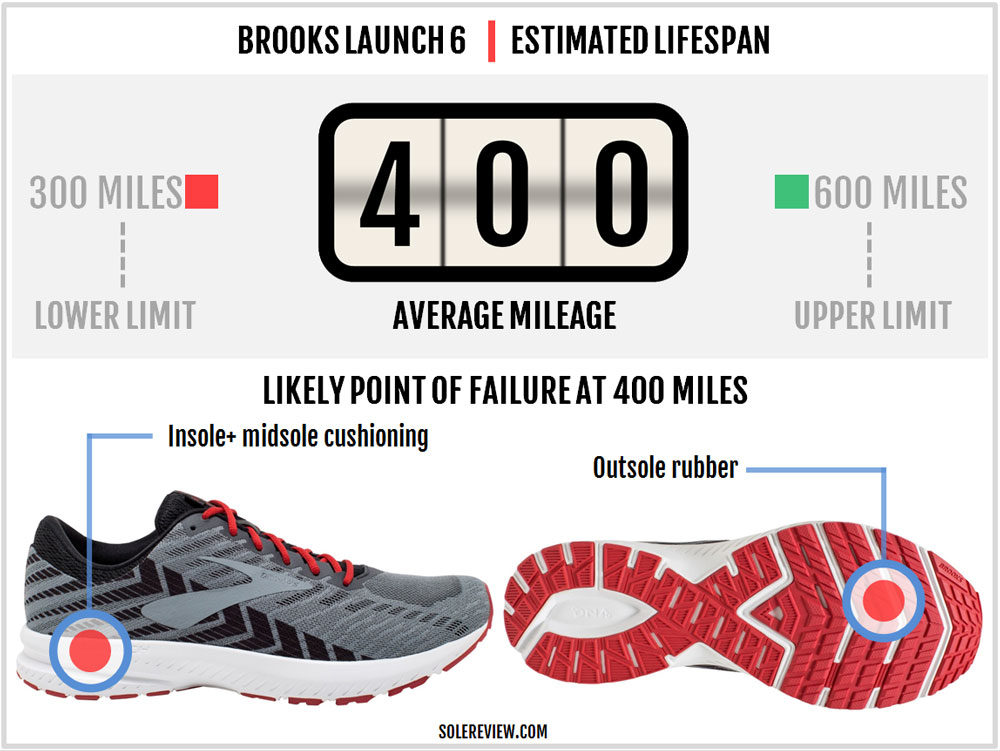 Believe it or not, the thickness of the outsole doesn’t always translate into longevity. The geometry plays an important role in how long the sole lasts. The Launch 6’s generously segmented outsole bends and flexes during the gait cycle and avoids taking the brunt directly.

Expect the Launch 6 to deliver 400 miles of trouble-free running. The firm midsole and the sleeved upper will likely outlast the rubber outsole. 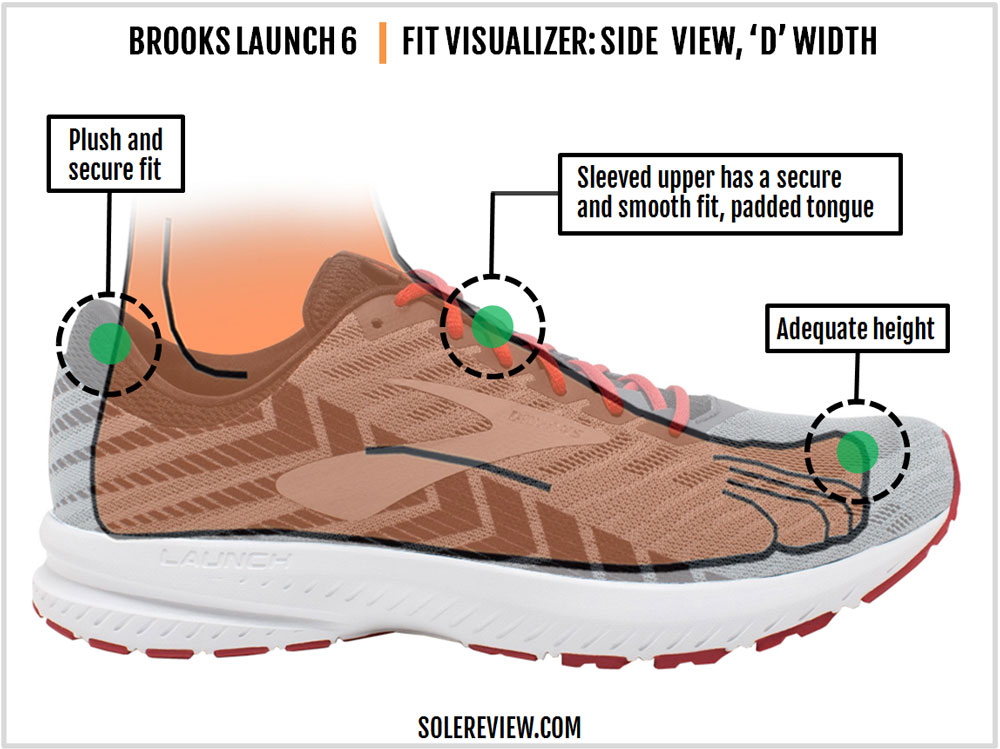 There’s not much to write about the Launch’s new upper; it is as straightforward as the single-piece midsole.

Sure, there are a few tweaks like the decreased foam padding in the heel collar and tongue. Or the new mesh and the fused side logos (the Launch 5 had printed ones) which make the upper appear streamlined. New trims like the reflective heel strip are a welcome addition to the Launch 6. 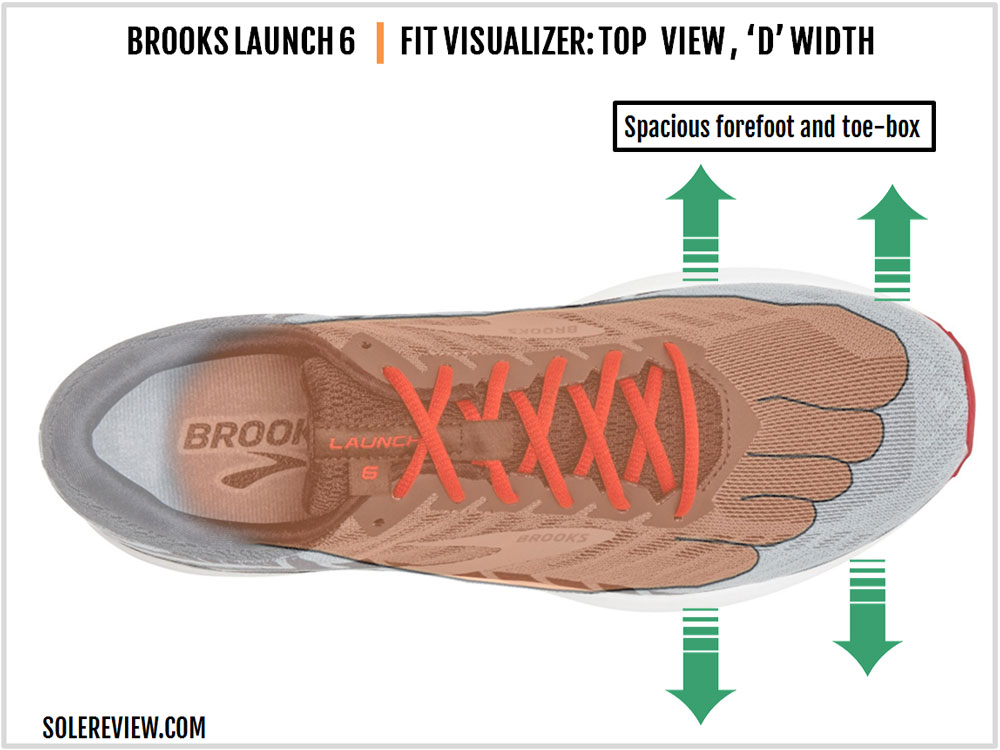 Apart from that, the Launch 6’s interiors have a familiar fit and feel. The insides fit true-to-size with no hot spots – thanks to the one-piece engineered mesh construction which is augmented with an inner sleeve. The padded tongue filters most of the lacing cinch.

It’s worth noting that the updated mesh has a tighter knit structure vs. the more porous surface of the Launch 5, so the Launch 6 feels slimmer than the 5. 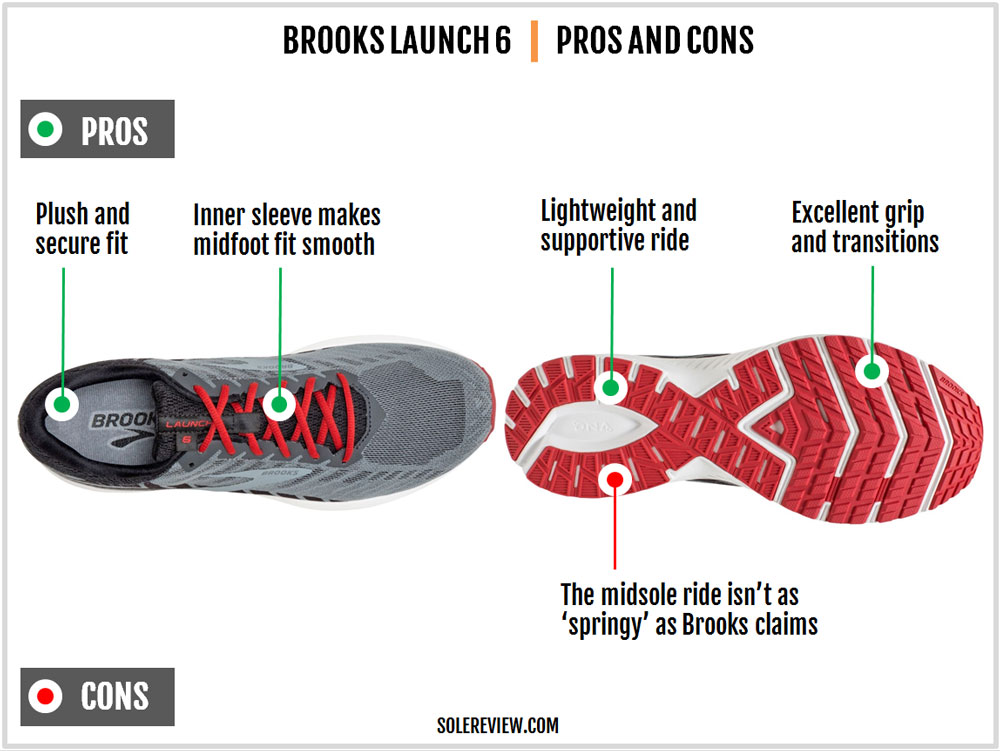 Some runners may not prefer the firm ride quality but that’s not a flaw by itself.

Some may also point out that the midsole feels flat compared to some of the other shoes with newer foams at the same retail price.

Again, this isn’t a functional lacuna in the shoe’s capabilities. The Launch 6 can do a few things which products like the Solar Drive or Reebok Energy can’t, and that alone is enough to redeem the Launch 6.

You’ll be hard-pressed to find faults elsewhere. The shoe weight is respectable, the pricing isn’t obscene, and the upper fits spaciously with a smooth inner feel.