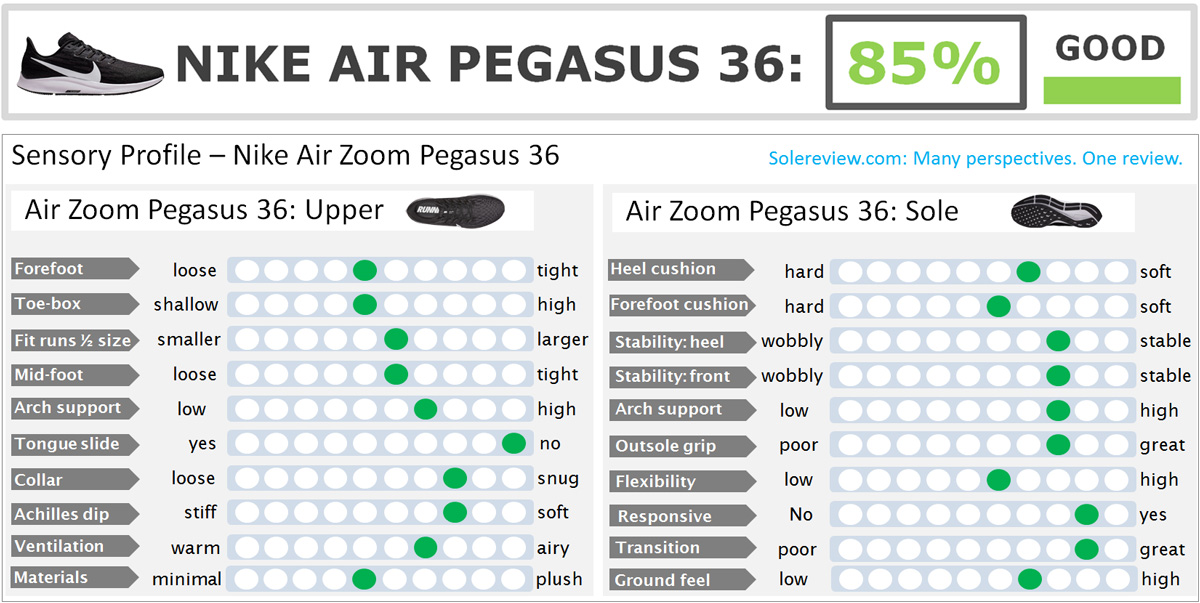 Nike’s marketing pitch: An Icon gets slimmer and cooler.

The Nike Pegasus returns for the 36th time with a new breathable upper and a shorter tongue. The ride character is identical to the Peg 35, which means it remains a versatile and dependable neutral trainer.
Cushioned and supportive heel, smooth transitions, breathable, lightweight
The thin and short tongue increases the top-down lacing pressure, the collar needs time to break in, the full-length Zoom isn’t as responsive as the 2-piece set-up. 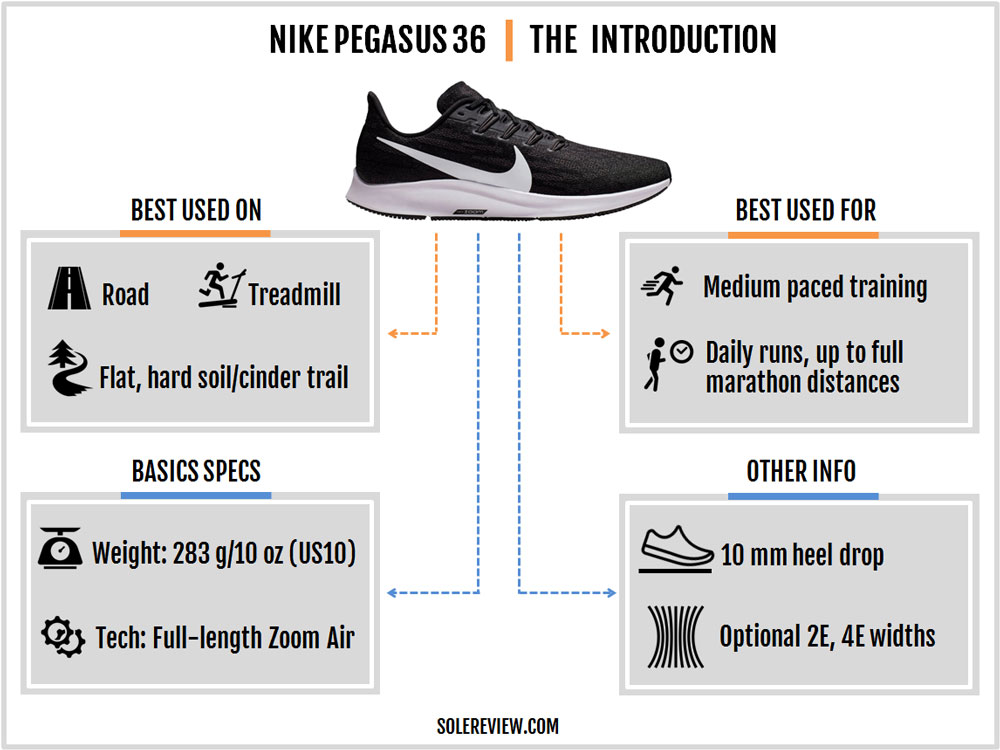 Most popular sportswear brands sell a running shoe which works for everyone, be it a novice or the experienced runner.

For Nike, the Pegasus has long been that shoe. So long, that nearly four decades have passed since the Pegasus took its first steps. Only the Mizuno Wave Rider and the Asics Kayano come a distant second from a longevity perspective. Even so, the Pegasus arrived a decade before the Kayano.

The Pegasus has always been a safe running shoe choice if you didn’t want to take chances. It lacks the newest cushioning tech, nor is the Pegasus the lightest. However, if all that you want is a reliable all-rounder for most kind of runs, then you’ll discover much to like about the Nike Pegasus 36.

The following section will give you a fair idea of the Pegasus’s place in the running shoe ecosystem.

SHOES SIMILAR TO THE NIKE PEGASUS 36 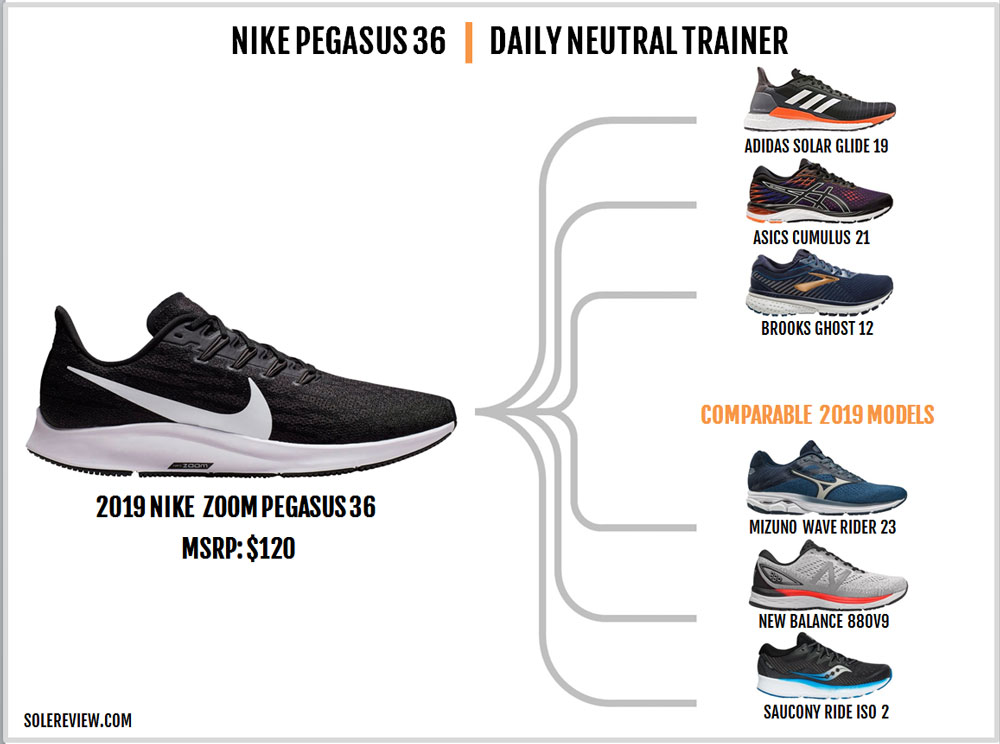 As we said, most brands sell a versatile neutral or support shoe. For Asics, that product is the Gel-Cumulus 21, a shoe with a softer ride than the Pegasus. Brooks sells the Ghost 12, a supportive-neutral shoe with a plush upper.

If you have taken a liking to the springy Boost foam, the adidas Solar Glide 19 is a cushioned trainer for daily use. The Pegasus 36 has a firm ride, so if that’s what you prefer, then the Mizuno Wave Rider 23 or the Saucony Ride ISO 2 are options.

Or you can choose from Reebok’s vastly improved running shoe line. The excellent Floatride Forever Energy is our top pick for 2019, and it happens to be cheaper than the Pegasus 36.

The Nike Pegasus also competes against traditional running shoe designs such as the New Balance 880V9.

There are a couple of other Pegasus variants. The FlyEase edition uses a combination of a zip closure and toggle lacing to make slipping on and off a breeze. The Pegasus 36 Trail is a hybrid shoe which feels at home no matter if it’s the road or packed trails. 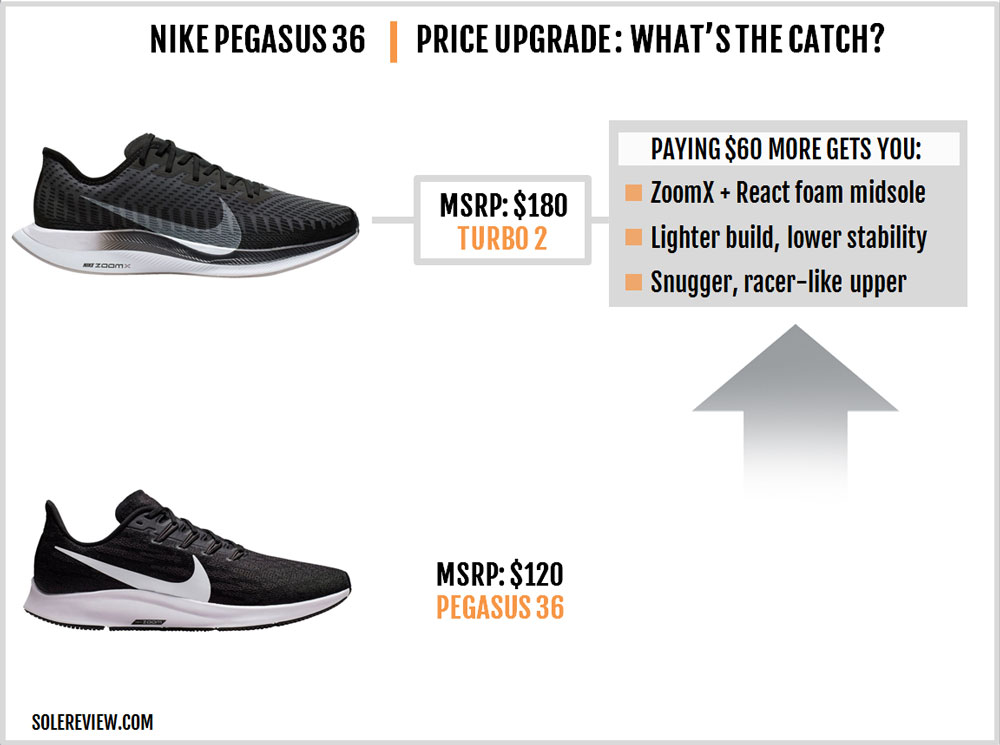 The nomenclature of the Turbo 2 can confuse people. Despite the Pegasus label, that is a completely different shoe with very few shared traits.

The midsole made of ZoomX + React foam is noticeably lighter and more responsive than the standard Pegasus. Even the upper is more racer-like, with fewer creature comforts than the Pegasus 36.

The Pegasus 36 is built on the same midsole as the 35, so there’s no difference in the ride character. If you sense that there’s a difference, that’s probably because you are comparing a worn-in Pegasus 35 with a fresh-out-of-the-box 36.

The upper is where you’ll find some changes. The tongue loses the padding and is shorter. This leads to a slight loosening up of the midfoot along with a higher level of top-down lacing pressure. In most cases, the front part of the heel collar will require time to break in.

There no change in the overall weight, and the retail price stays the same too.

One of the first things to strike you during the initial run is how ordinary the Pegasus 36 feels. The ride doesn’t have the springy responsiveness of the adidas Boost, Reebok Floatride, or even Nike’s ZoomX foam.

The full-length Zoom Air unit inside a relatively firm EVA midsole casing makes the ride stiff by contemporary running shoe standards. But then, that’s the reason why shoes like the Pegasus and Saucony Ride ISO end up being so versatile.

In this case, a firm ride doesn’t equate to a lack of cushioning. There’s plenty of that under the foot, starting with the removable blown-foam insole. The combined stack of Zoom Air over an EVA layer offers a sufficient level of cushioning – be it a short 5K run, 10K, or longer. 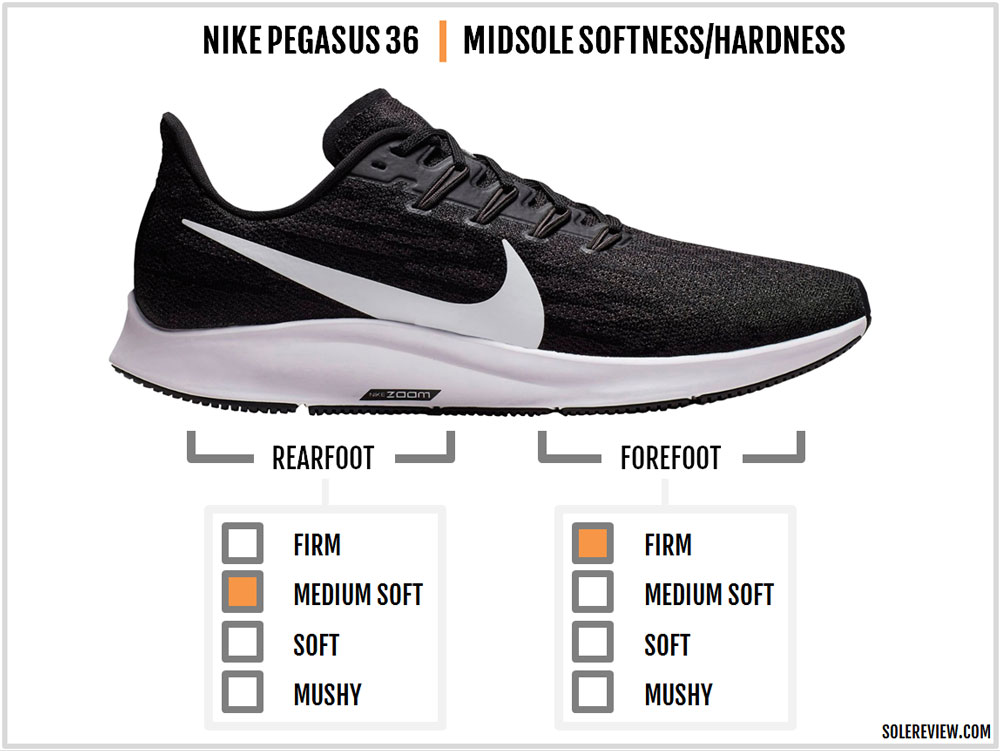 With a firm chassis, you can also dial up your running speed without worrying about distracting sink spots. Naturally, you can’t expect the same level of speed-friendliness from the Pegasus as you would from a proper road-racer. Rather, this is a shoe which can do it all without being exceptionally good in one area.

Sometimes it’s funny how running shoes are judged in reviews. In shoes like the Saucony Ride and the Nike Pegasus, their mediocrity happens to be the most praiseworthy trait.

The best use-case for the Pegasus 36 would be that of a running shoe for daily runs.

Even if that ‘daily’ run happens to be 10k long, you’ll be very comfortable in the Pegasus. The upper has a comfortable fit (except for a couple of minor flaws), and the ride is padded enough even for the occasional long run of 20+ km. 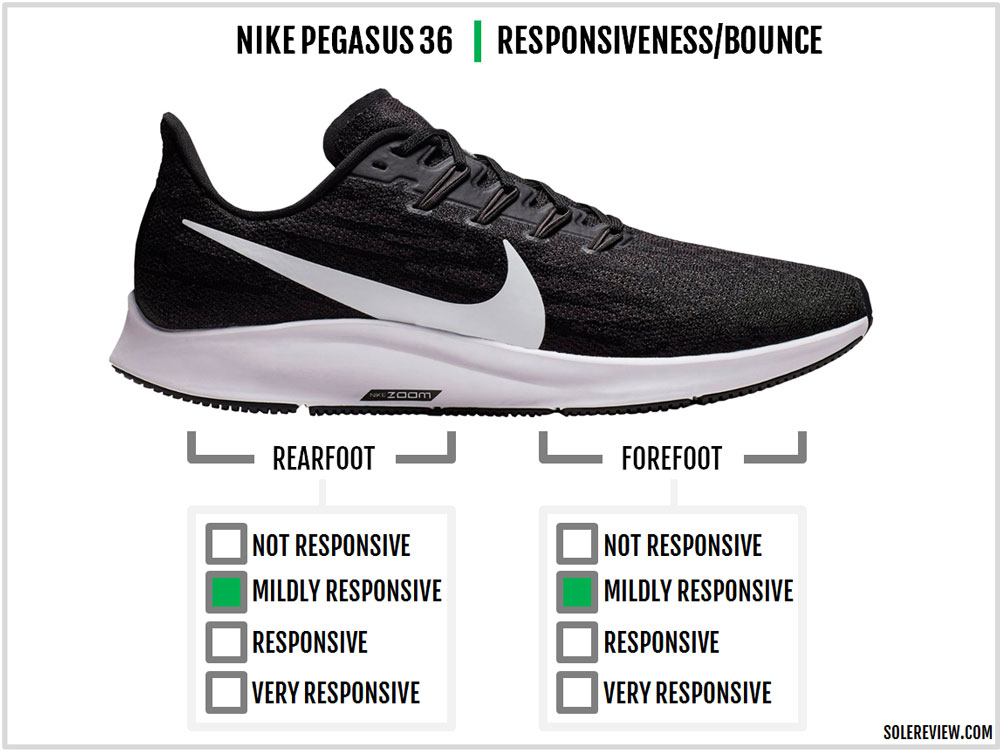 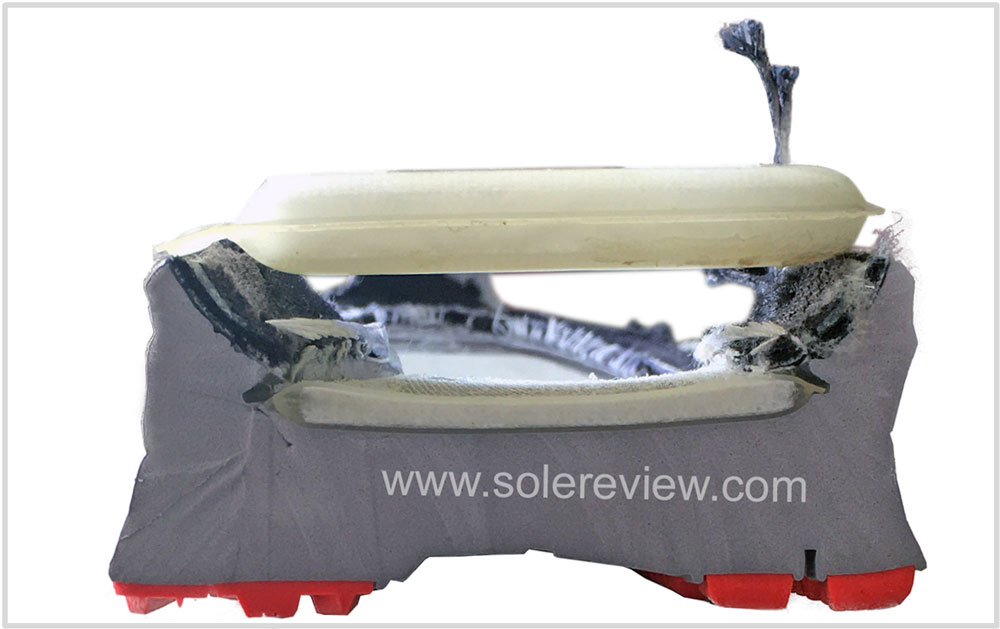 We’d like to point out that the full-length Zoom used inside the Pegasus doesn’t have the snap of the 33 and 34.

In our review of the previous Pegasus, we showed you why – the new cushioning unit is only half as thick as the older Zoom Air bag. So if you’ve been a Peg loyalist and feel something is off with the Zoom cushioning – your hunch is well-founded.

This is more likely to be observed by forefoot strikers because of the tapered midsole. After all, the Pegasus 36 is a running shoe with a 10 mm heel-to-toe drop.

It is also futile to compare the Pegasus’s responsiveness with new-age foams. Here, even less-expensive Reebok shoes give the Pegasus a run for its money.

The ‘crash rail’ design divides the rubber sections with grooves, and the forefoot outsole has plenty of exposed windows. The articulated geometry helps the outsole work together with the midsole in a seamless manner – as opposed to working against it. Traction-wise, the rubber outsole grip very well on most surfaces – unless we’re talking about slimy surfaces. 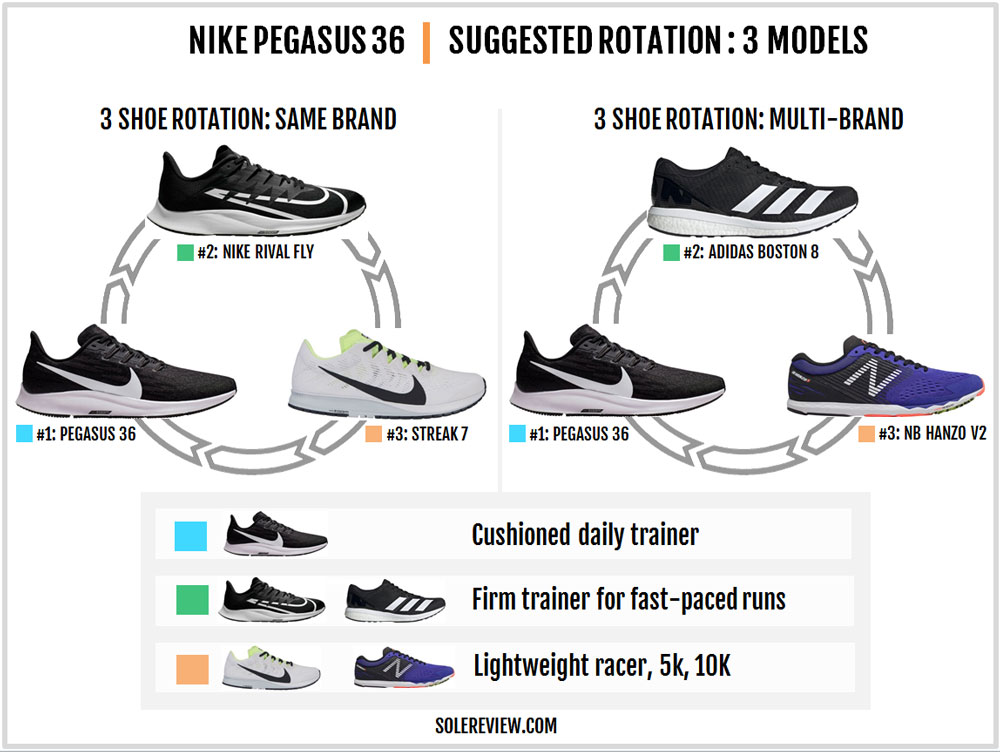 Though the Pegasus 36 plays the role of a daily neutral trainer well, your speed training and racing needs will be better served by the Zoom Rival Fly and the Streak 7.

The Rival Fly is our suggested replacement for the now extinct Zoom Elite. Use the forefoot Zoom equipped Rival for your faster speed runs. For the sake of brand and ride diversity, you can choose the adidas adizero Boston 8 or the Skechers GoRun Razor 3 instead of the Rival.

Short races of 5K or 10K distances are better done in the Nike Streak 7 or the Nike Balance Hanzo SV2. For marathon races, the Nike Vaporfly 4% or the Next% are excellent options.

IS THE NIKE PEGASUS 36 DURABLE? 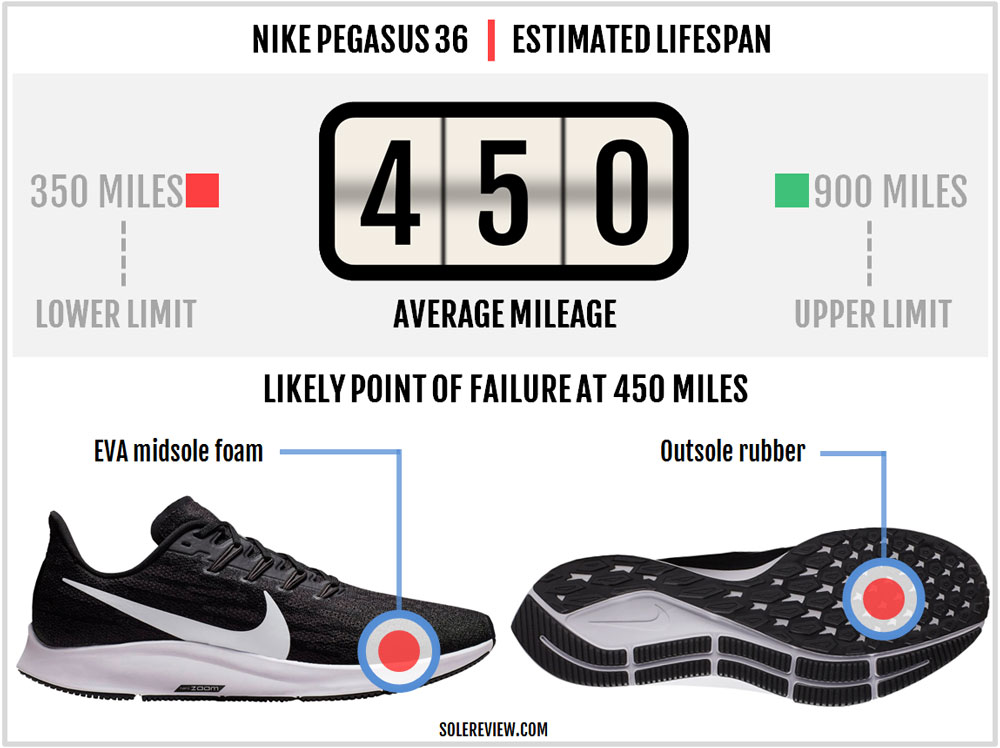 You’ll extract the same mileage from the Pegasus 36 as the 35 – which is around 450 miles. The Zoom Air and the midsole do not fatigue easily, and there’s plenty of strength in the sleeved upper.

There were initially some concerns about the thinner rubber used on the last year’s Pegasus (vs the 33 and 34). That turned out to be a non-issue. Just like on the Pegasus Turbo, the flexible outsole design sees very little wear and tear. 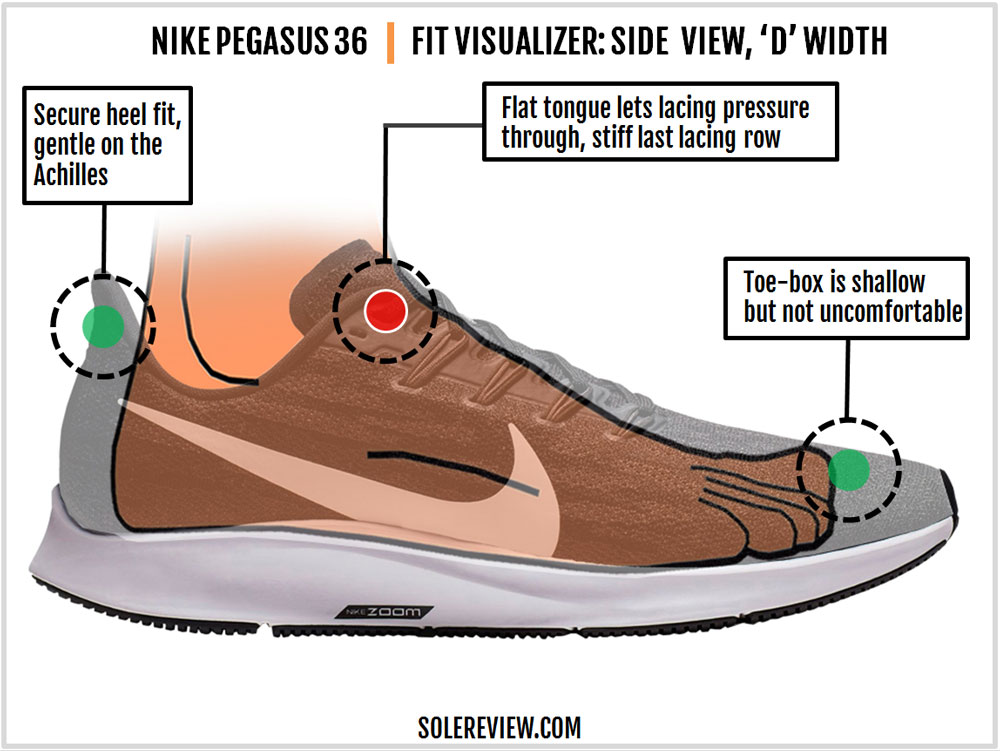 There’s not a lot of change to see here compared to the Pegasus 35. And if you don’t have prior experience with the Pegasus, that’s ok – we’ll lay it out for you. The upper fits true-to-size and has sufficient foot splay room.

It breathes well too, an area which was lacking on 35 – we did call it out last year. The newly added ventilated sections integrated into the forefoot and midfoot mesh allows better air movement. This is an improvement, and so is the larger piece of reflectivity over the heel.

The Flywire cord lacing and the raised Achilles lip fit and feel very similar. Even the flat laces are identical. However, there is a significant change in the tongue design. 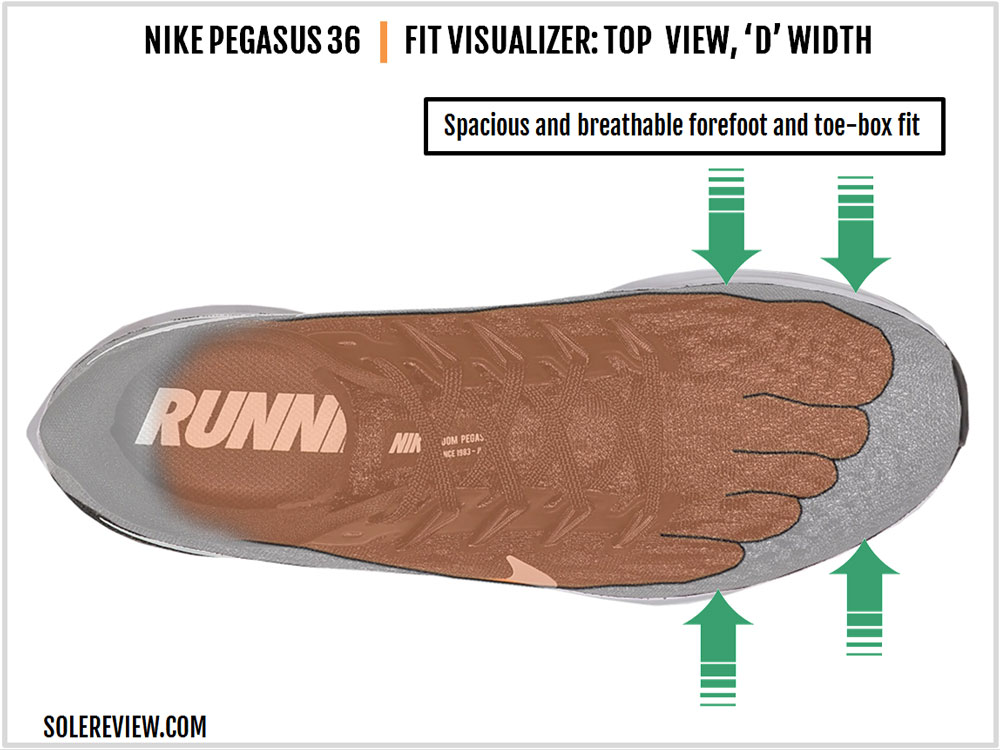 While we were no fan of the 35’s needlessly long tongue, the redesigned upper heads towards the opposite direction. Now you have a road-racer kind of tongue without any padding and has an asymmetric flap. It is similar to what the Vomero 14 has – which means that the tongue is marginally short in length.

Does the concept of ‘middle ground’ even exist for a brand like Nike? They really like to do things the extreme way, often resulting in less than perfect results.

A race-tongue isn’t a bad thing by itself. However, here you can feel the last row of laces applying more pressure than they should. This is the first Pegasus upper to have a flat and short tongue with no padding, so this will be an unfamiliar fit experience for most.

Nike has this habit of latching on to an internal design language for a while. Sometimes, it’s a pressure-mapped outsole. In other years, it’s a special kind of insole. The last couple of years have embraced the pointy, boat-like shape of the Vaporfly. And now a foam-less flat tongue is the new flavor of the season.

There’s a break-in time involved for the last row of lacing. Nike has reinforced the lacing panel with thicker welding for the 36. This change, when combined with the unpadded tongue, results in the stiffness being felt over the instep. 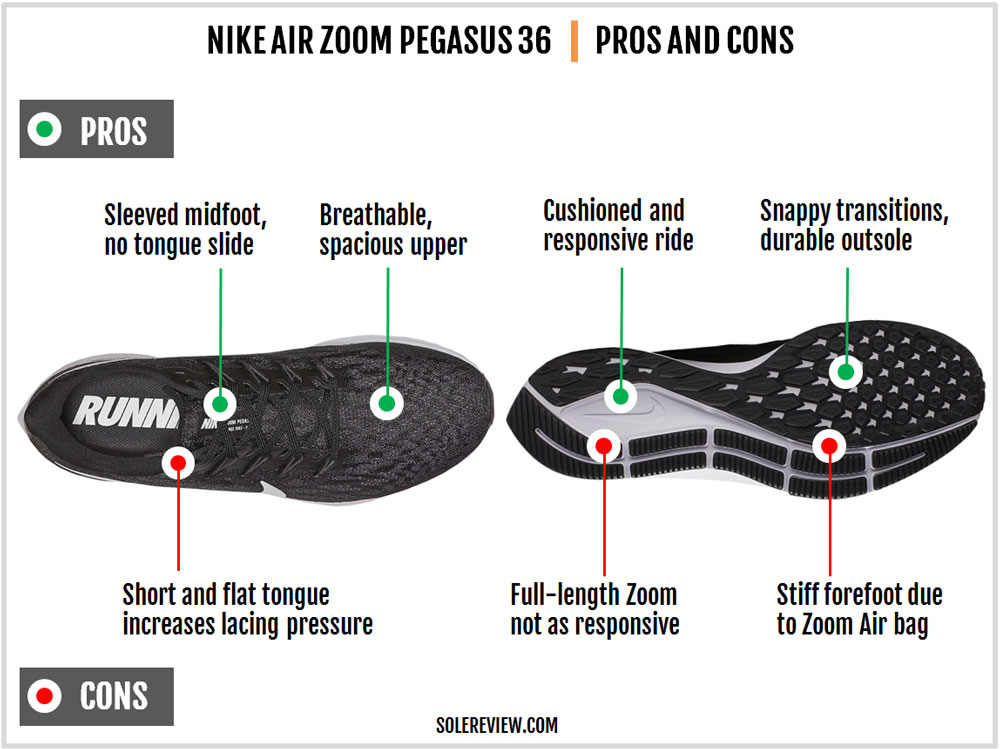 Here’s rounding up the Pegasus’s nice and not-so-nice bits. Very few shoes possess the do-it-all capabilities of the Nike Pegasus, and that’s where the shoe shines. The just-right cushioning and the spacious upper fit makes runs of all kinds efficient without punishing your feet. The new Pegasus outperforms the previous generation model in breathability – that’s a plus too.

That said, the Pegasus 36 doesn’t have the impressive cushioning behavior of new e-TPU or Pebax foams.

And the new tongue is a love-it or hate it kind.