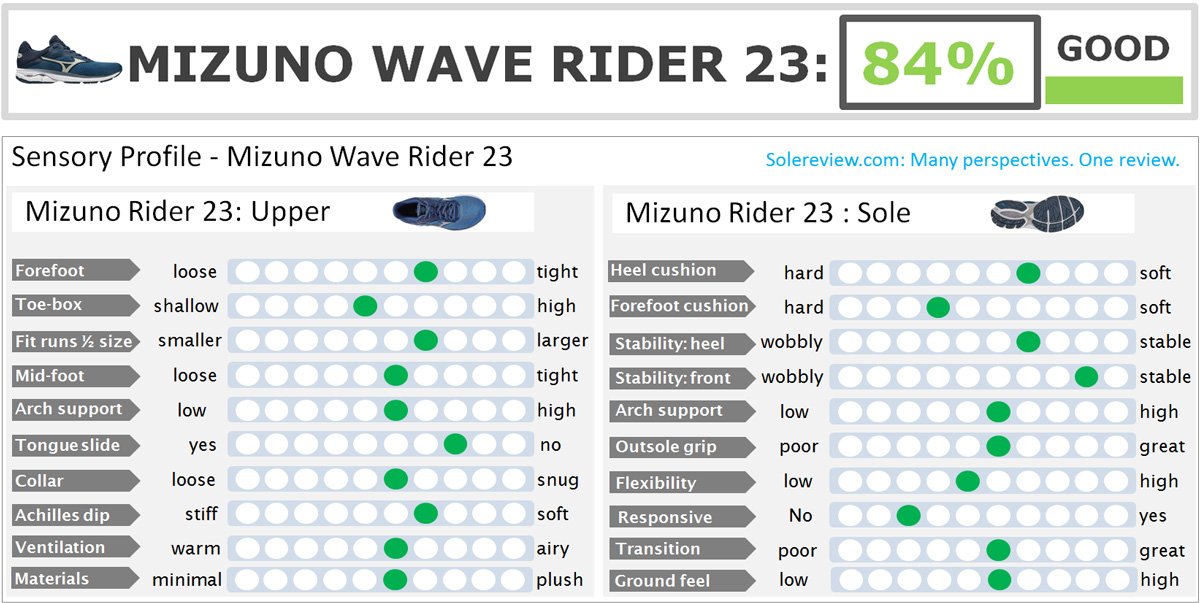 Outsole: Harder carbon rubber in the rear, softer blown rubber under the forefoot. 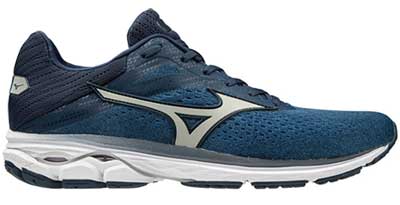 Buy from Zappos.com
.Check price on Amazon
Don’t worry - the Wave Rider 23 still has the ‘Mizuno-ness’ it’s loved for. A Wave plated midsole delivers the familiar snap and firm ride. The new upper gets a cleaner aesthetic and a sleeker fit, courtesy the new mesh and more fused and hidden layers.
Supportive and cushioned heel, flared and planted forefoot, plush insole
The midsole foam durability, the stitched-logos could be done away with, clunky outsole 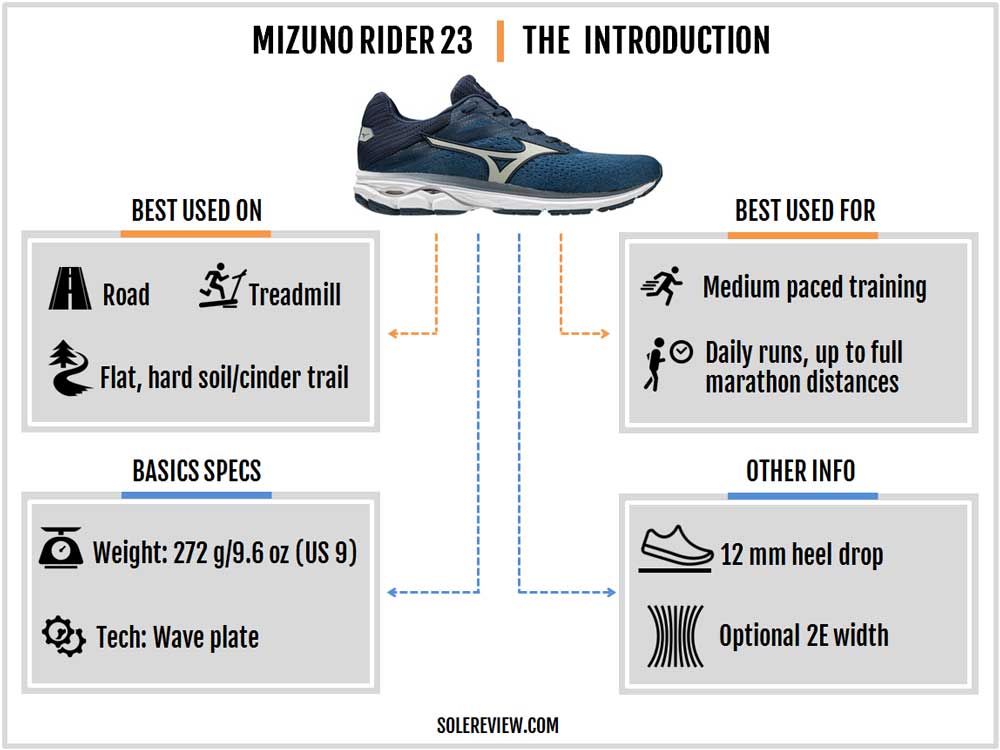 Mizuno is the slowest in the pack to embrace new designs or materials, but there are signs of changes. The Wave Sky Waveknit 3 has a new midsole minus the Pebax Wave plate AND a knit upper – that’s as radical as Mizuno gets. The Wave Sonic sells without the namesake Wave plate.

At the same time, many Mizuno running shoes stay untouched by the sweeping changes, the Wave Rider included.

So if you love the unique ride signature of the Wave midsole technology, you’ll be happy with the Wave Rider 23. For 2019, you get the same bottom set-up as the Rider 22 but with a brand new upper.

The Rider 23 is a great neutral daily trainer if you like a firm and planted ride with the characteristic snap of the Mizuno Wave.

The Wave-plated rearfoot and the flared forefoot makes this Mizuno versatile enough for most kind of runs. There’s ample cushioning for long leisurely runs as well as marathons.

If there’s no change in the midsole and outsole design, what has changed?

The upper styling, mostly. And a little of the upper fit. The Rider 23 gets rid of the various stitched overlays which crowded the 22’s upper.

For 2019, the toe-bumper moves inside and the lacing panel is now welded-on instead of stitched. The fit is typical Mizuno – roomy and all – but relocating the bumper internally makes the fit a pointier in the front.

That pretty much sums up the updates. The bottom line is, you can stick to the Wave Rider 22 without any urgency to upgrade.

Though the 12 mm heel-to-toe drop might suggest a ride quality which favors rearfoot strikers, the Rider 23 offers something for everyone.

Naturally, with that kind of drop, most of the materials – foam and otherwise – is packed in the rear. Two densities of foam layers sandwich the thermoplastic Wave plate, so you get most of the cushioning softness – if you can even call it that – is situated under the heel. 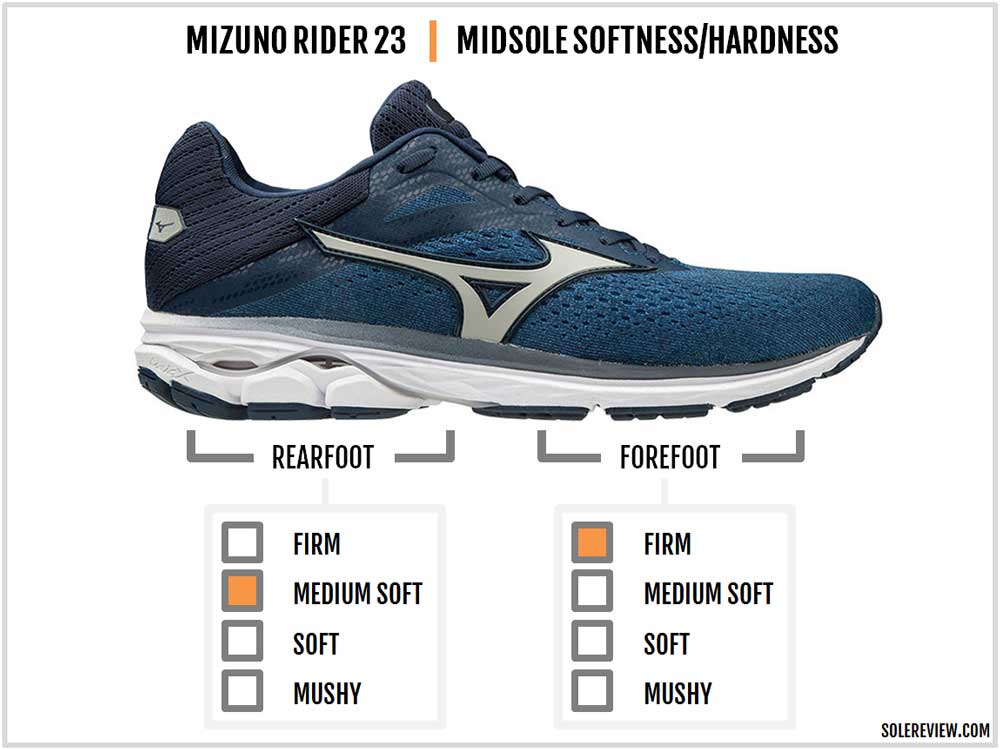 Though the foam wedge under the Wave Plate has a lower density than the upper layer, it isn’t ‘soft’ in the sense we know it.

While the foam layers compress under loading along with the Wave insert, the midsole is firm by most running shoe standards. The only soft part of the Rider 23 happens to be its blown-foam insole which looks and feels like an Ortholite footbed. (but isn’t)

Besides, the outsole uses a thick, hard rubber (X-10) which doesn’t flex along with the foam it is mounted on. On the road, heel-striking can get a bit noisy due to the outsole material and design.

Also, you need to give the Rider 23 some break-in time for the foam and plastic parts to function together optimally.

This process involves a slight compacting or flattening of the foam layer just above the heel outsole. So the Wave Rider 23 after 100 miles is a firmer, more efficient running shoe than the fresh-out-of-the-box one.

The forefoot midsole also turns more flexible over time. The outsole has multiple flex grooves, but it takes a while for the midsole to utilize them effectively.

The finer workings aside, the Wave Rider 23 offers a cushioned and snappy ride for rearfoot strikers along with a surefooted transition and grip in the front. The forefoot blown rubber is softer than the heel, so not only do forefoot strikers get a muffled landing, but the wide and flared base also makes for a stable launchpad.

The firmness and unique cushioning system of the Wave Rider make the ride very neutral and supportive. There’s no ride bias or sink-in soft spots throughout the length of the midsole. This behavior also works well for gym and treadmill use. The protective midsole also allows you to take it out on light trails.

With the Wave-plated package comes excellent versatility. The firm ride makes the Rider 23 a better choice for faster runs than other neutral trainers in this class. It lacks the softer cushioning of models like the Asics Cumulus or Brooks Ghost, yet we even see the Rider as a marathon shoe once you build up a level of tolerance. 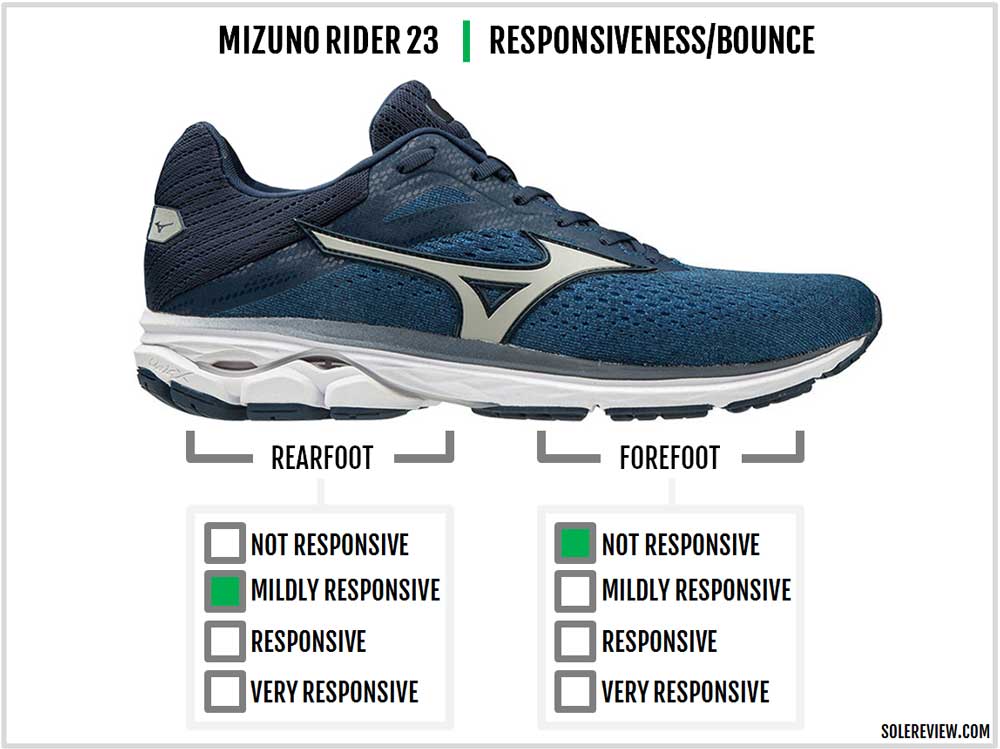 Though the Wave plate produces a momentary snap-back sensation during heel landings and forward transitions, the experience isn’t springy. It’s more on the lines of, ‘hey, that’s the Wave plate stretching and returning to shape’. We also have to keep in mind that the Wave plate doesn’t have a lot of play either.

Initially, there’s some ‘pistoning’ effect happening under the rearfoot. The heel wedge is U-shaped with a hollow cavity in the center. Thus these foam columns compress upon landing and feel responsive. However, this sensation will subside over time as the midsole begins to bed in.

Though Mizuno Wave Rider 23 doesn’t have a full ground-contact outsole, the transition quality isn’t far off from competing shoes which feature a filled-up midfoot. The Pebax Wave Plate also acts as a footbridge which transfers weight, so the midfoot gap doesn’t have a significant penalty on the loading process.

You won’t find a soft ride in the Rider 23. Optional are the new Wave Sky 3 Waveknit or the Saucony Triumph ISO 5; both these shoes have plenty of foam cushioning to make long rides comfortable.

The superlative Mizuno Ekiden is now dead, so consider alternatives such as the Wave Sonic, the Wave Shadow 3, or the New Balance 1400V6 for fast runs and races. 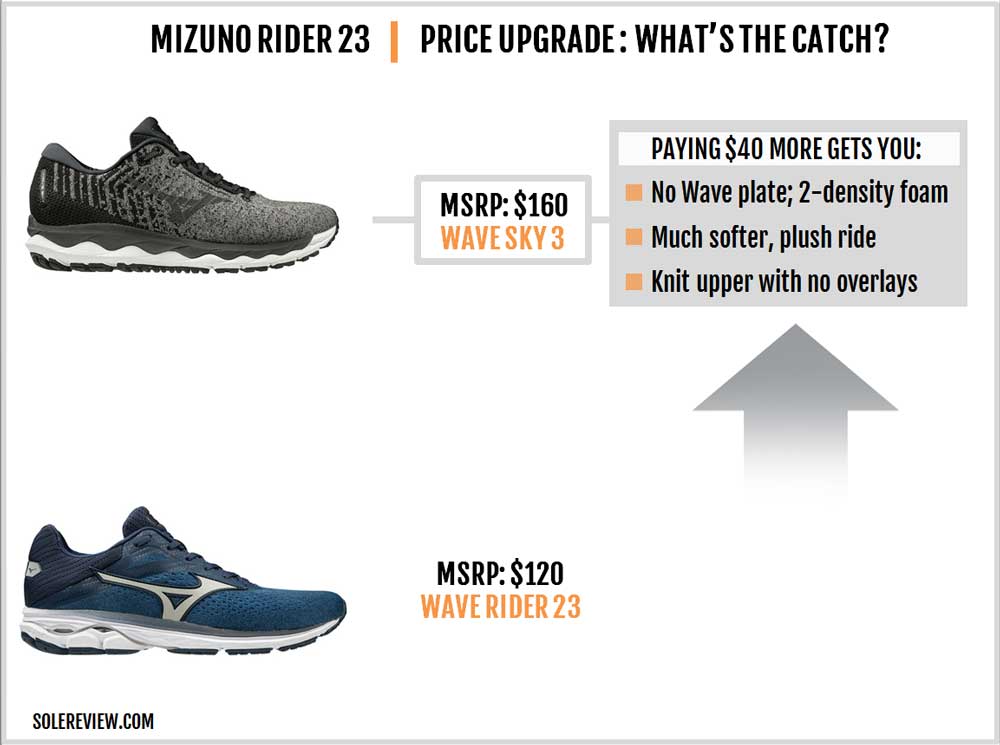 The Wave Sky Waveknit 3 has the word ‘Wave’ in it, but it’s not what you think. Two densities of soft foams are interlocked together in a wavy pattern and create a ride which is a lot softer than you’re used to – for a Mizuno, at least. The upper has a knitted exterior so you get a much smoother interior.

IS THE MIZUNO WAVE RIDER 23 DURABLE? 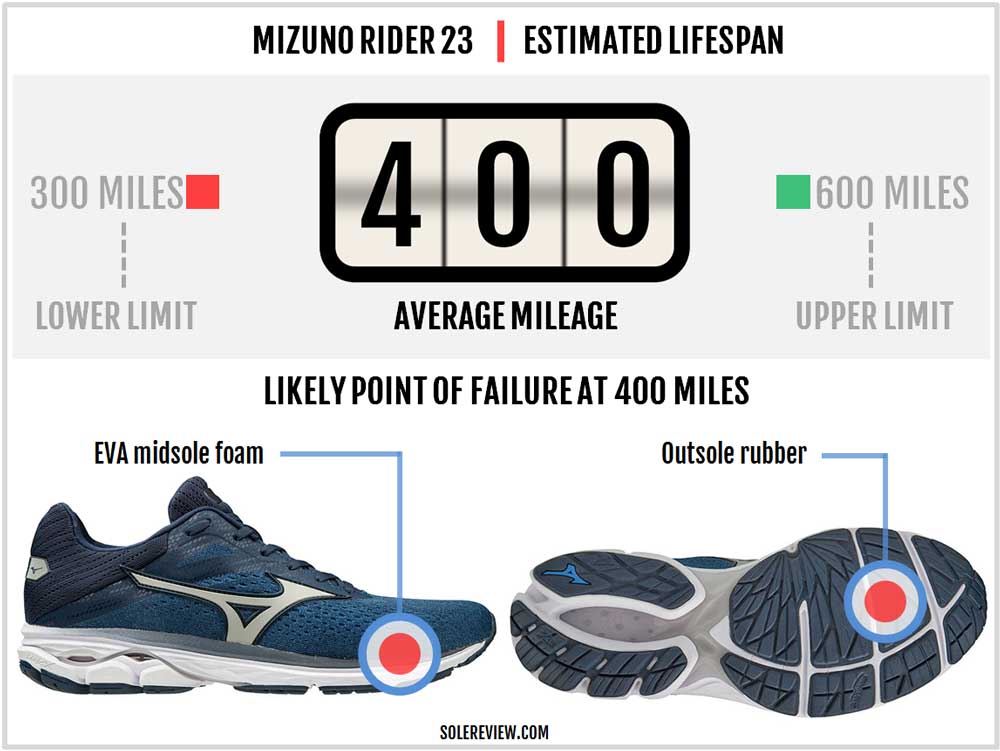 The Mizuno Wave Rider 23 is moderately durable. It doesn’t last as long as other shoes with non-EVA midsoles and fancy outsole rubber compounds.

All being said, the shoe will deliver approximately 350 – 400 miles of dependable performance. 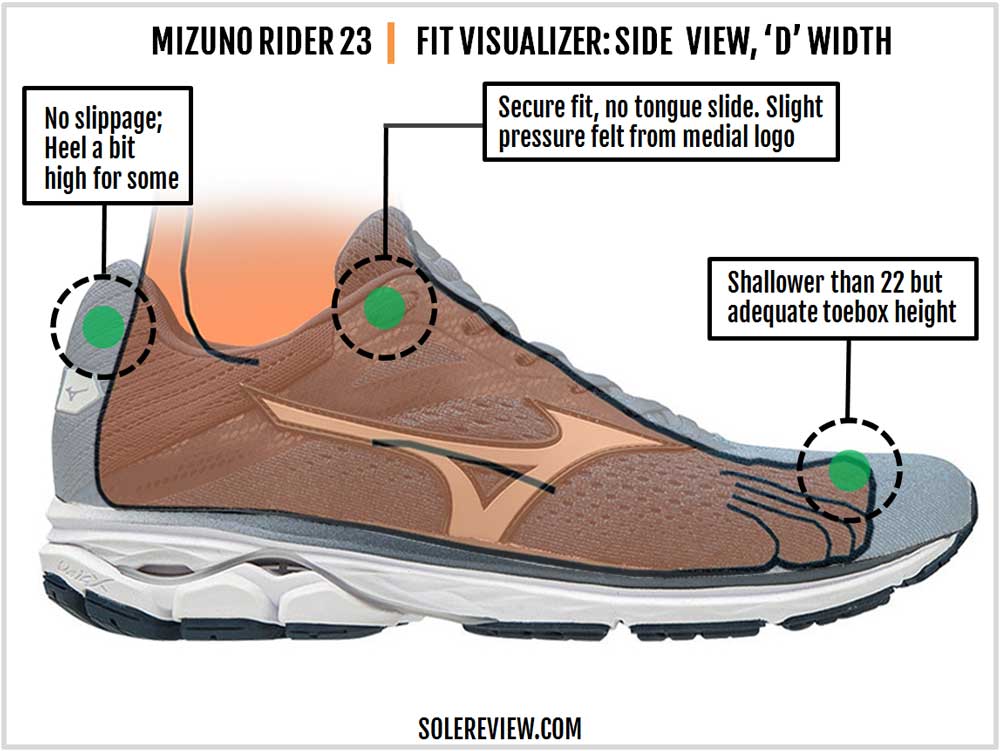 The upper follows a fairly recognizable template, the kind which creates a familiar interior fit. The pair of stitched Mizuno logos prop up the midfoot upper; inside, the sleeve-free tongue has a wide flap.

For 2019, Mizuno applies a few updates to bring the Rider 23’s upper design up to code. Notable tweaks include replacing the stitched-on toe bumper with an internal one, and also using fused layering on the lacing panel.

There are other small changes such as using flat laces instead of the 22’s round ones and the de-cluttering of the outer heel design. While the latter makes the Rider 23 look ‘modern’ and streamlined, the toe-bumper is the only part which affects the fit.

The Wave Rider series is synonymous with a spacious forefoot, and that continues to be the case for the V23.

However, you’ll find the toe-box to have acquired a pointier profile. 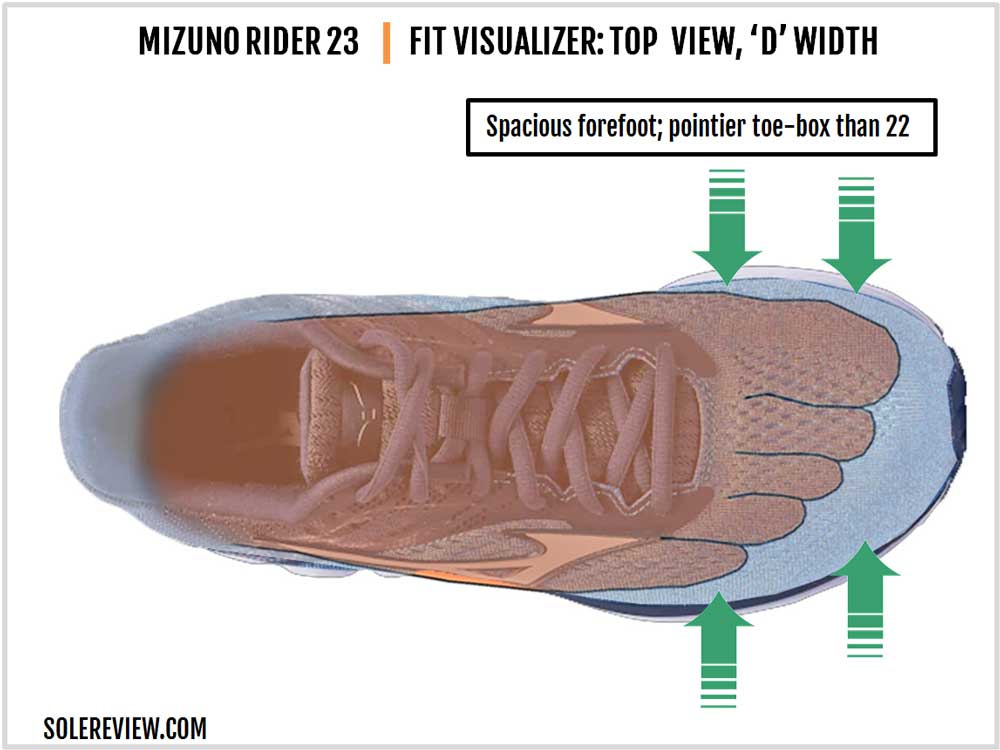 Since the last (upper shape) of the Rider 23 hasn’t changed over the 22, swapping an external toe-bumper with an internal kind comes at the cost of space. The engineered mesh also has a relatively packed structure over the 22, and that too contributes to the slimmer fit.

The rest of the upper feels like a Mizuno. The stitched-on logos apply a bit of side pressure under the arch, and the padded broad tongue does its job without sliding.

Though the outside of the heel has been cleaned up, the inside feels like the same – the foam-backed collar pads the foot without slipping. And like always, there’s an internal heel counter for support and a reflective strip for low-light running. 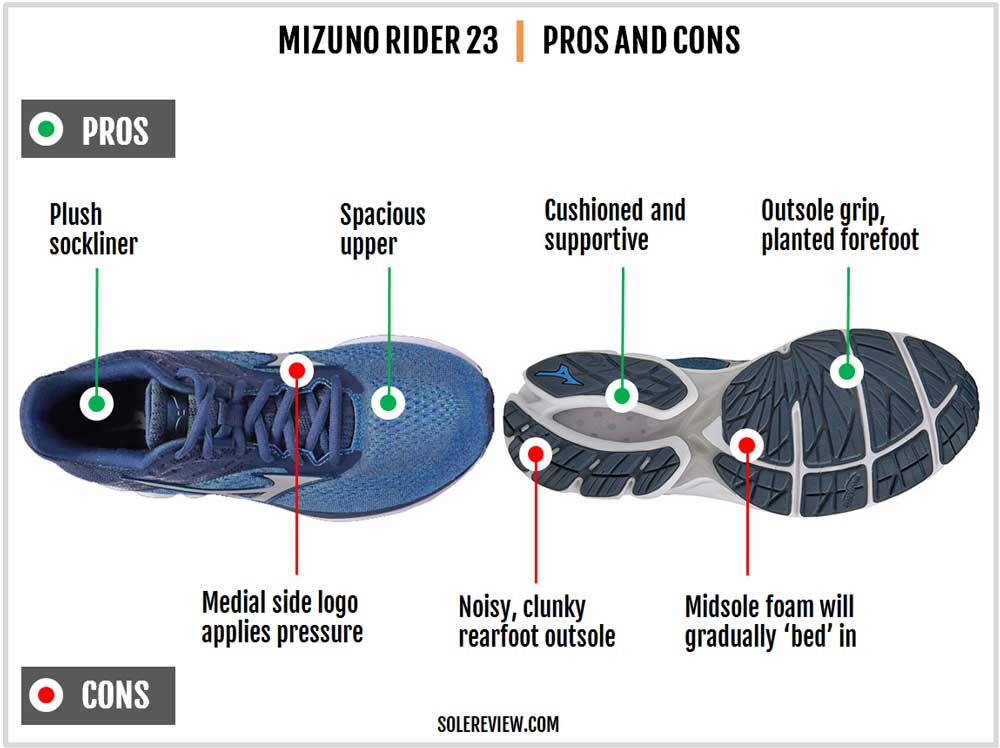 If you like your running shoe to have a firm and snappy ride, you’re in for a treat. The Wave Rider 23 isn’t your average over-foamed running shoe. The Pebax plate infuses the ride with a firm undertone, a trait which makes the Mizuno stable and compatible with faster-paced runs.

At the same time, there’s enough cushioning for your daily runs. In short, versatility is what the Rider 23 has in spades. Even with the slimmer toe-box, the Wave Rider 23 has sufficient room for the foot to splay.

There are a few quirks. The ride feels clunky because of the stiff plate and the heel outsole. The foam cushioning compacts after a while too. 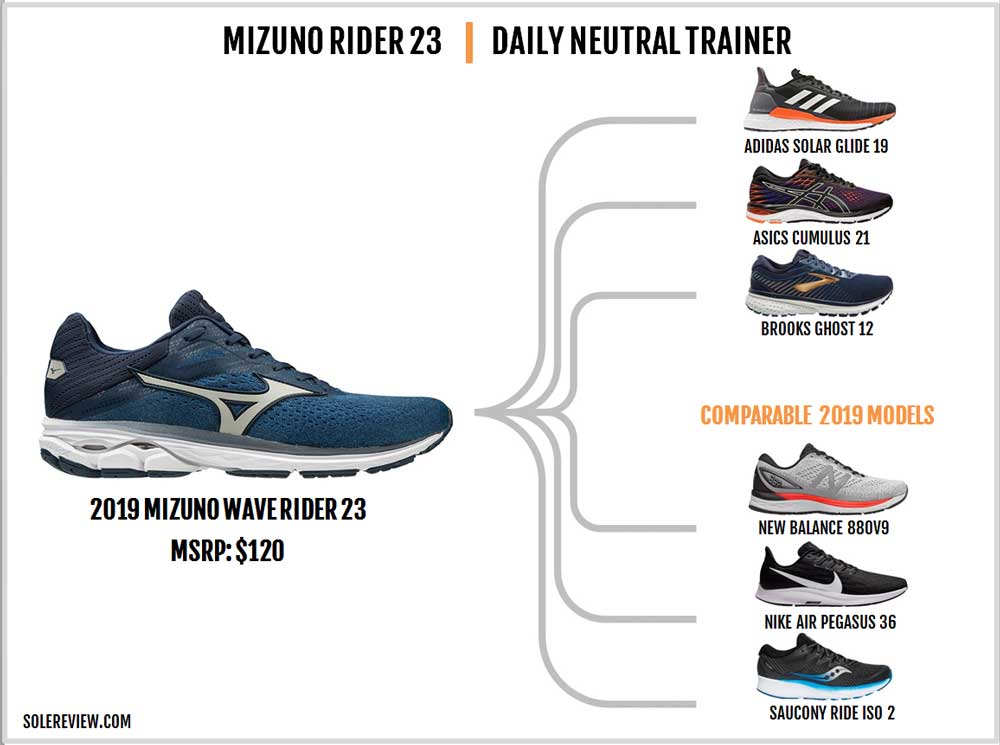 Mizuno running shoes with the Wave plate are usually an acquired taste. Hence, some runners prefer shoes with an all-foam design or ones which use ‘traditional’ cushioning technologies. That’s what this section is about; we’ll suggest alternatives from the same segment.

With the Rider 23 being in the mid-priced neutral cushioning class, there’re so many choices here. Models like the Asics Cumulus 21 or the adidas Solar Glide ’19 offer a softly-cushioned ride.

The Brooks Ghost 12 and the New Balance 880V9 have lots of cushioning but without being overly soft. Popular neutral trainers like the Nike Pegasus 36 and the Saucony Ride ISO 2 deliver cushioning served with a tinge of firmness. So these two share something in common with the Rider 23 – even though they happen to be completely different shoes.

Unlike other brands, Mizuno differentiates its neutral and stability shoes not by a firmer posting or raised sidewalls, but by adjusting the Wave plate design to make it harder on the inner side.

Except for the slightly higher level of firmness (on the medial midsole), the Inspire 15 is interchangeable with the Rider 23; both the shoes feel similar in fit and feel. The Inspire 15 still has an external bumper in the front so the toe-box is wider than the Rider. 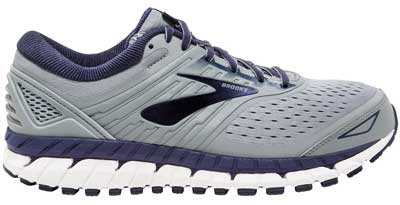