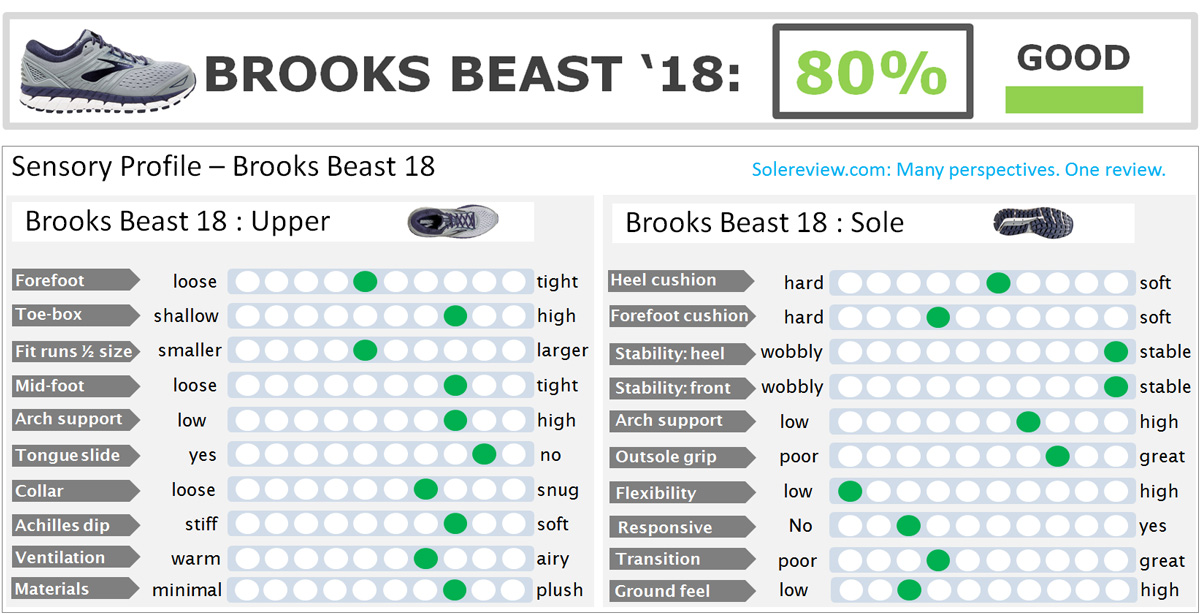 The Brooks Beast has always been known for its ultra stable ride, and the ’18 doesn’t disappoint - as long as you don’t compare it to the 14. The new upper has more room than the 16.
Stable yet cushioned ride, roomy fit, outsole grip
Heavy, only good for easy-paced runs, not as stable or well-built as the older Beasts

Most running shoe categories are represented by a slew of popular models. The flag bearers for the neutral trainer class are shoes such as the Nike Pegasus, Brooks Ghost, and the Saucony Ride. Think of traditional stability trainers, and names like the New Balance 860, Asics Kayano and GT-2000 come easily to mind.

When it comes to max-stability, it’s hard to think of any other shoe save for the Brooks Beast. Sure, you have others like the New Balance 1340 or the Saucony Redeemer, but there’s something about the Beast which has made it the go-to shoe it is.

The Beast’s reputation as a god-tier stability shoe was built by versions 14 and earlier; those were examples of solid footwear engineering.

For example, not only did the Beast 14 have an ultra-stable quad-density midsole, but it also had a layered upper which locked the foot in plush comfort. On the downside, you had to live with the extremely narrow fit and shorter sizing.

The Beast went through a radical redesign process in 2019 and emerged as a less stiff shoe. Key to this change in character was a two-stacked midsole which increased the cushioning softness. We believe the intent was to target a wider consumer demographic, as opposed to the hard-core stability shoe loyalist.

With the Beast 16, the franchise lost a few customers and gained new ones. Besides, the sun is setting on the firmer medial-post design, so the new Beast is just a response to the changing times.

The Beast 18 is updated with a much roomier upper fit, something was lacking in the previous versions. The ride quality is the same as the Beast 16 – not change there.

We’re a little surprised ourselves why this review took so long – but now is a good a time as any.

SHOES SIMILAR TO THE BROOKS BEAST 18

The Beast 18’s bland looks might be off-putting for a few runners. If that’s you, the Brooks Addiction 13 is a better looking option with a smooth and stable ride.

A lighter, cushioned, and a more youthful-looking alternative is the Saucony Redeemer ISO 2. The Everun Topsole and the thick footbed adds plenty of comfort over a supportive midsole.

The New Balance 1540 V3 is a bland yet very stable running shoe. It’s also made in the USA if that’s important to you.

There are other models like the Asics Foundation 12, the Saucony Omni ISO, or the Mizuno Wave Horizon 3. They’re not of the same stability level as the Beast but possess varying levels of stability and cushioning. They’re worth trying if the heft of the Beast isn’t for you.

We also see the Brooks Transcend 6 as an excellent choice if you want your shoe to very cushioned yet supportive at the same time. Unlike the rest of the shoes on this guide,

As we said, the only change in the Beast 18 is its upper. There’s more room available inside the forefoot and toe-box.

Running shoe styling is subjective, but the way we see it, the Brooks Beast 18 looks dull as compared to the 16. The increased space is also a result of using more open mesh and fewer overlays, so the upper appears sloppy. 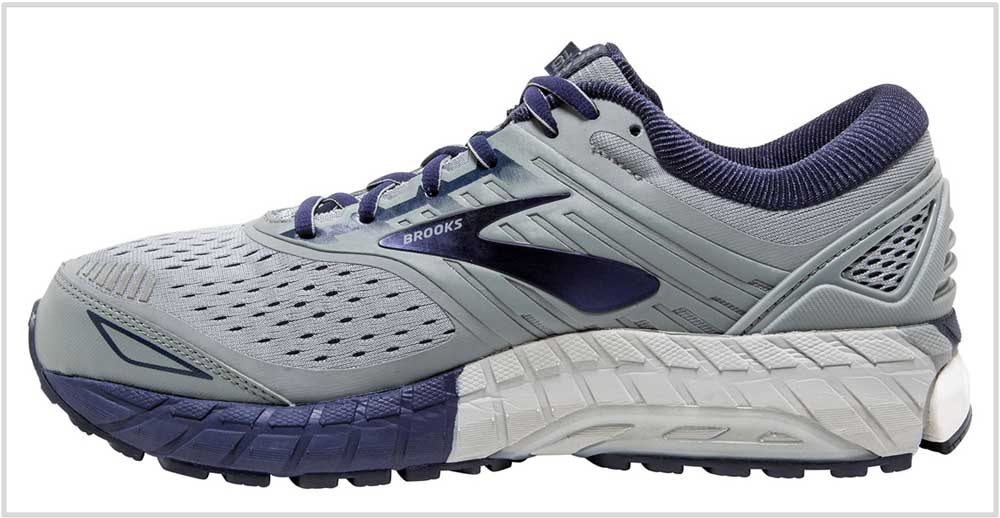 There’s one thing which the Brooks Beast doesn’t do very well, and that happens to be runs of a quicker kind. If a fast 5K or 10K run is on your mind, you should this and this buyer’s guide.

You can try going fast in the Beast, but it constantly reminds you that it is a 13.3 ounce/ 377 gram shoe. By the way, that kind of weight used to be the norm over a decade ago. But today, with most shoes tipping the scales at 9 ounces or lighter, 13+ ounce is a travesty.

And if you think that’s heavy, you should have seen the 15-ounce Beast 14. Regardless, 13 ounces is a lot, so where does that all the weight go?

Into the Beast 18’s wide sole unit, that’s where. There are four different densities of firm foam along with a large medial post and a plastic footbridge. Inside, a chunky Polyurethane footbed creates the cushioned top layer.

Outsole rubber is used liberally over the bottom. A tacky blown rubber compound provides great traction under the forefoot, and that’s complemented with a hard-wearing rubber under the rearfoot.

A major difference between the older Beast and the current generation midsole – which is fitted on the 16 and 18 – is the full-length stack of two foams on the lateral side. The medial (arch) side has a single-density forefoot along with the harder wedge – no change there.

So while the midsole feels substantial and stable under the foot, there’s a slight compression bias on the outer side. Here, the softer upper layer of the midsole is easier to compress.

Don’t get us wrong – while there’s plenty of supportive cushioning under the foot, you won’t get the surefooted stability of the Beast 14 or 13. 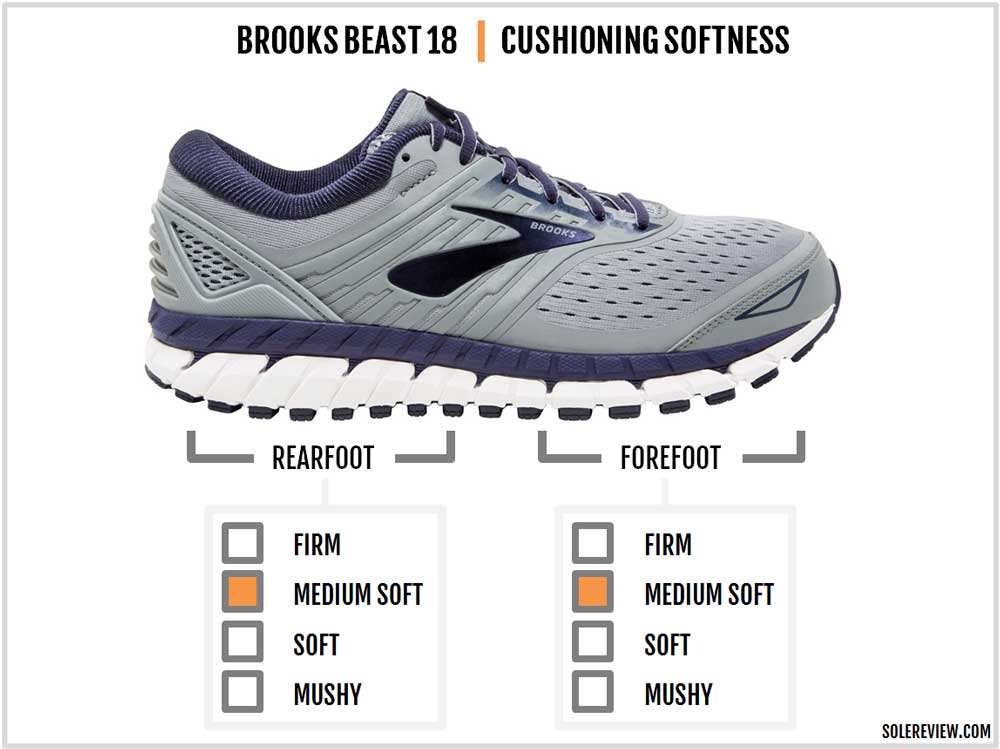 One of the things we’ve always loved about the Beast is its thick Polyurethane foam insole. A layer of step-in comfort feels welcome on a firm shoe like the Beast. It’s also thick enough to be replaced with an orthotic of your choice.

Other than the insole, there’s very little softness in the Beast’s ride. The thick midsole is great at absorbing impact but that’s not the same thing as cushioning softness. You get a comfortable ride but of a firm, stable nature. 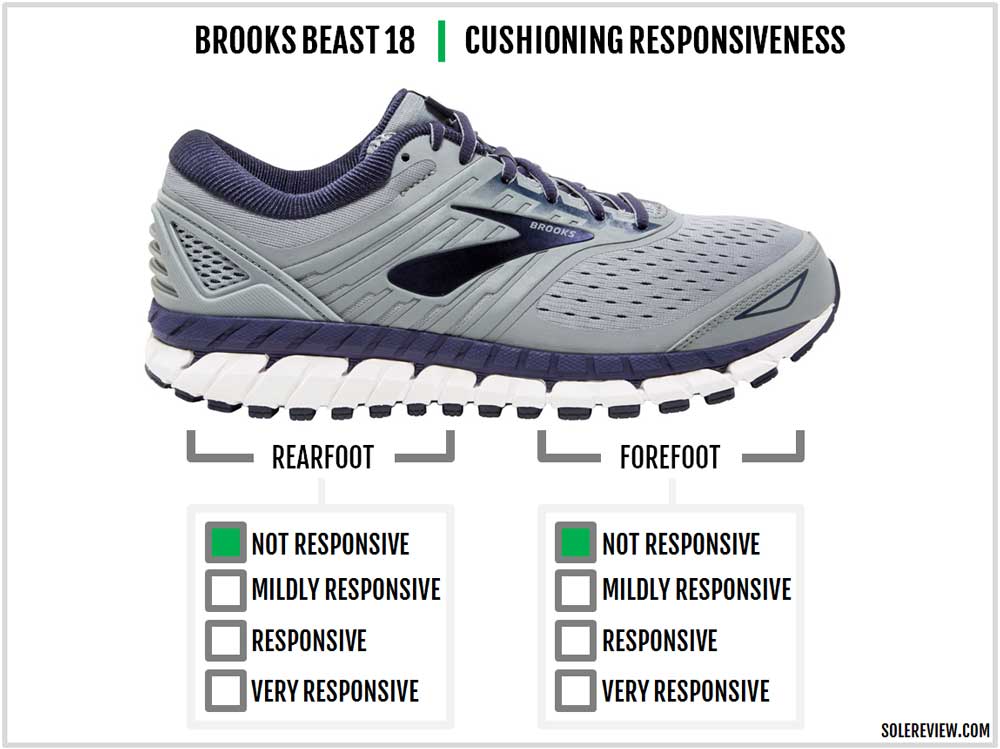 There’s very little responsiveness. The firm midsole layer and the large medial post results in a vanilla ride character which is mostly flat. If you want a bit of a responsive pop, we recommend the Saucony Redeemer ISO instead.

So what is the Brooks Beast 18 good for, exactly?

This is a shoe for the easy runs of varying mileages. Or walks. Or standing all day. While you’ll miss the Beast of the old, the new midsole packs lots of support within a cushioned package. If you are a large-framed runner, the Beast will also work for you. 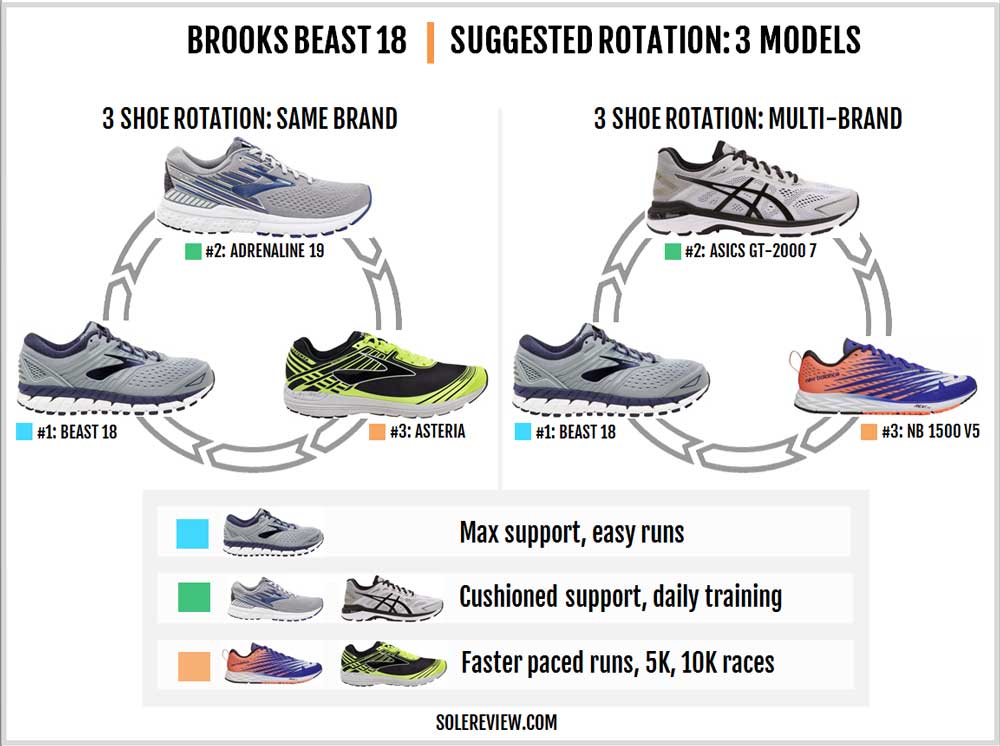 Switching up with a lighter shoe like the Adrenaline GTS 19 or the Saucony Guide ISO 2 will give you a softer and relatively faster ride.

For races and fast 5K runs, lacing up the Brooks Asteria, the New Balance 1500V5, or the Saucony Fastwitch 9 is a good idea.

IS THE BEAST 18 DURABLE? 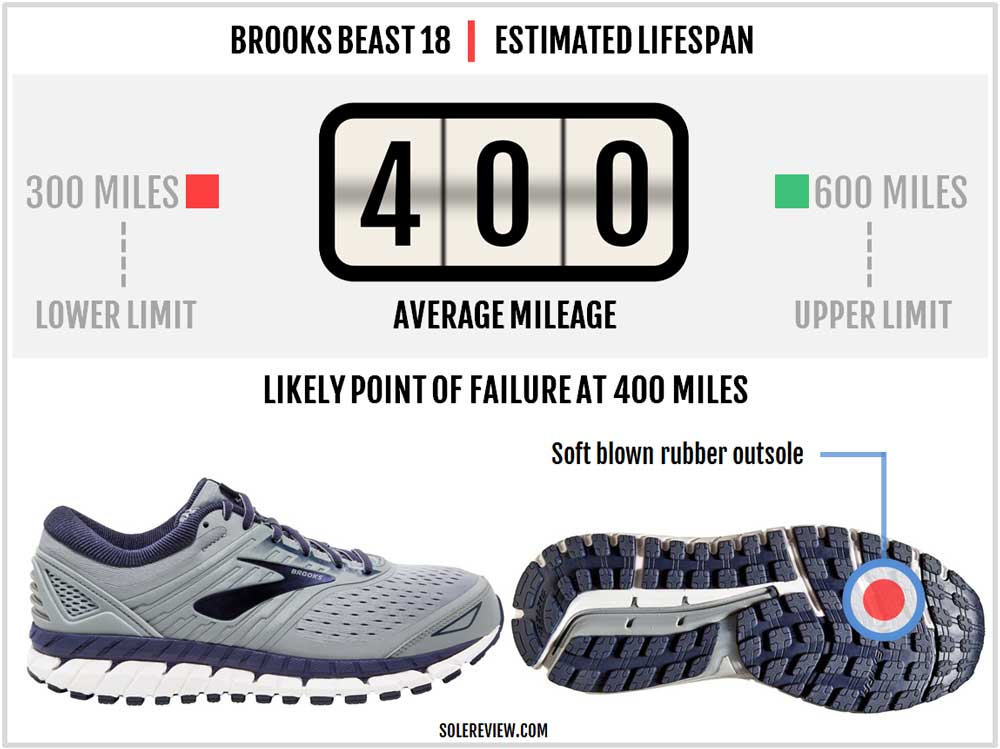 Based on the feedback from the Beast 16, 350 miles from the ’18 is a fair estimate. Though the outsole rubber isn’t as durable as the one used in newer Brooks models like the Levitate, it lasts as long as the average running shoe.

The thick upper isn’t going anywhere; you’ll chew through the blown rubber outsole before anything else. 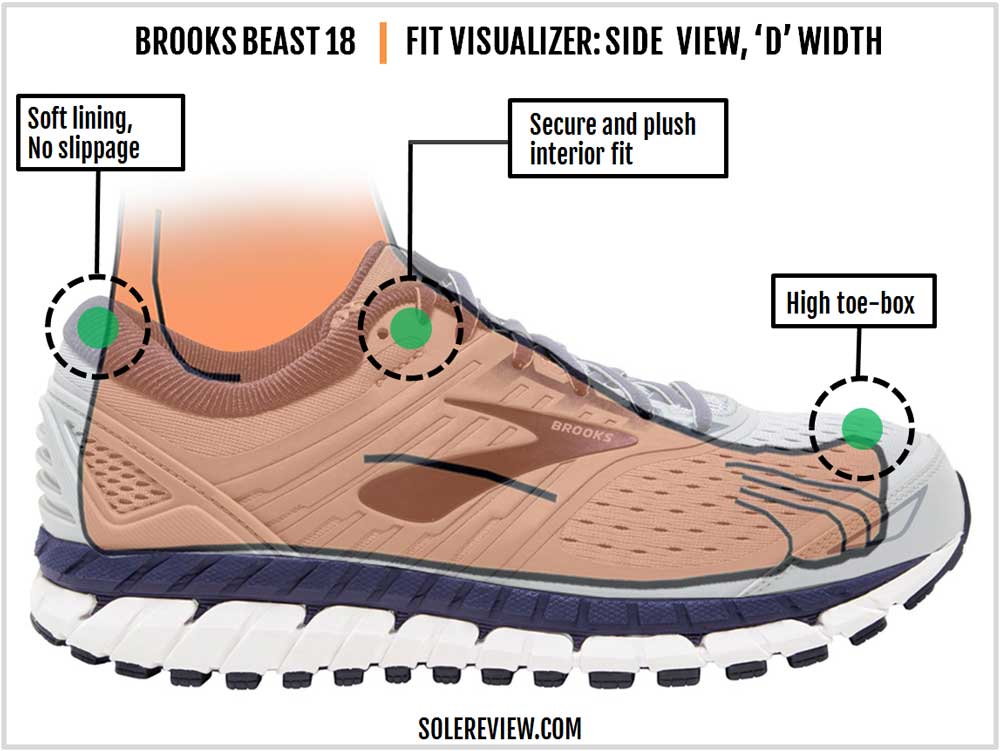 The newly acquired fit is the biggest update on the Brooks Beast 18 over the 16. This is the roomiest Beast version by far, with acres of room inside the forefoot and toe-box.

You no longer have to buy a 2E width to get a standard fit. The 18 still sells wide and extra-wide fits, so that’s always an option. 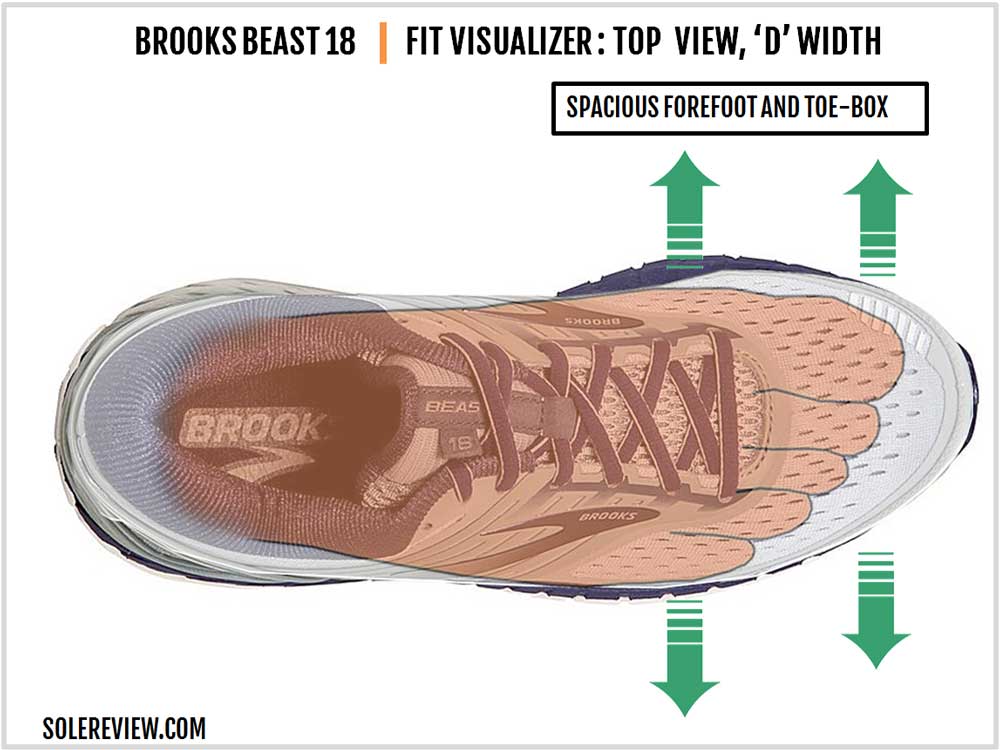 As a result of the updated fit, the upper doesn’t go crazy with the use of overlays. The forefoot is kept mostly free of synthetic layering so the insides breathe a little better than before. However, the new Beast upper doesn’t look as premium or streamlined – that’s the trade-off here.

The insides continue to use soft-touch materials. Even the round laces have a soft-hand feel. The foam-backed heel collar and tongue lining feel premium while fitting securely over the heel and midfoot. The external clip around the heel creates a supportive cup and also happens to be reflective (along with the toe-bumper) for low-light visibility. 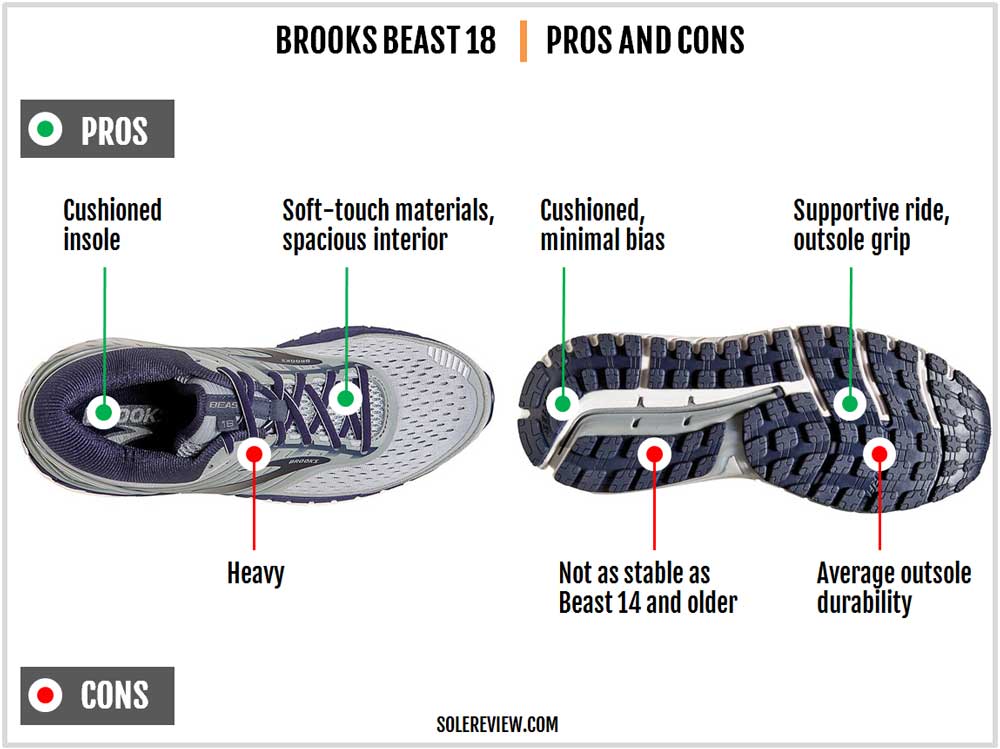 The Beast 18 is a heavy shoe, but in return, you get a cushioned ride with high levels of stability. The medial post isn’t intrusive, and though there’s a sense of softness biased towards the outer side, the ride feels balanced as a whole. The outsole traction is excellent as well.

However, the ride is fairly flat in cushioning character – there’s nothing special about the DNA foam midsole except for its supportive build. It’s also a heavy shoe, so there’s a limit to the kind of runs you can do in the Beast.