Nike’s marketing pitch: Revolutionary cushioning that conforms with every step

There are few shoes softer than the Joyride Run, so this could be your go-to lifestyle sneaker. But as a performance running shoe, this is as bad as it gets.
Extremely soft cushioning for casual use
Too mushy for running, unstable, poor transitions, unresponsive, expensive, no widths, runs warm 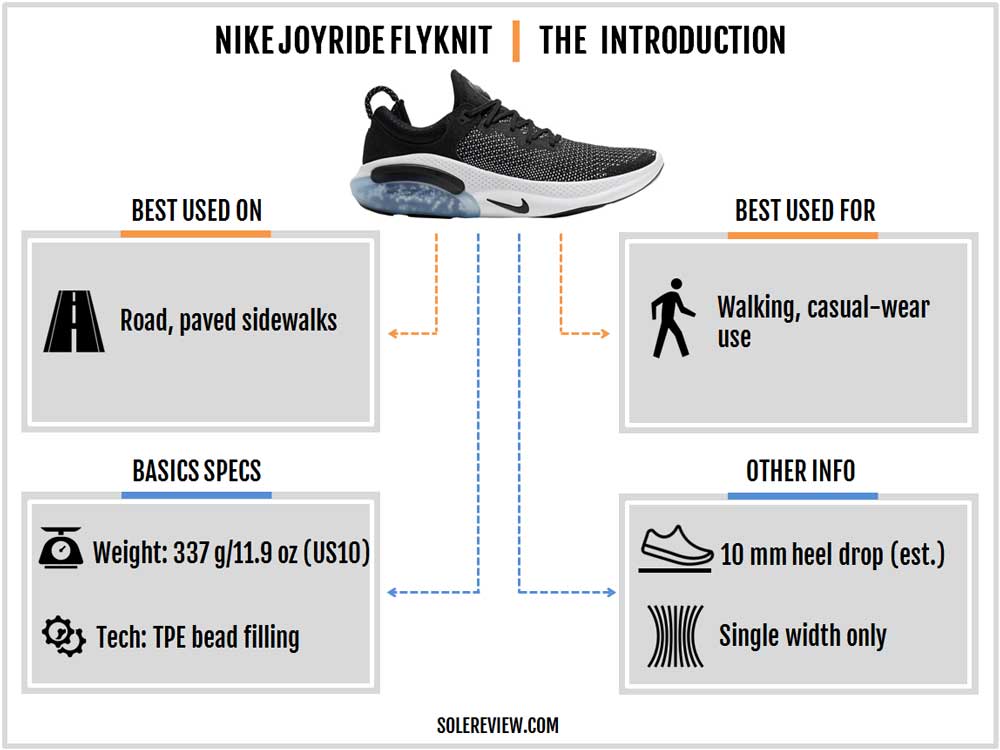 Bad running shoes have a way of searing into your memory.

Last week, if you had asked solereview which was the worst running shoe we have run in, we’d have promptly redirected you to the review of the 2014 adidas PureBoost Reveal.

With the Nike Joyride in the picture now, we’re not very sure.

To be clear, the Joyride is a very cushy shoe which is great for lounging around town. It’s like having four bean bags taped to your foot – and that’s a fairly accurate description of the shoe.

The problem is, Nike markets the Joyride Run Flyknit as a running shoe. That it is most certainly not. And if it is supposed to be one, it is a very bad kind. That was the same problem with the PureBoost Reveal. A reviewer’s viewpoint depends on how a brand markets or positions its product.

According to this press release, the Joyride is meant for the ‘seasoned marathoner or a novice’.

In our opinion, the Joyride is the worst $180 mistake one can make as a seasoned runner. On the road, a $100 Reebok Floatride Energy or even a $90 Nike Winflo 6 will run rings around the Joyride. If running shoe softness is what you’re after, the Nike Pegasus Turbo or the Epic React Flyknit are superior alternatives.

If you’re a beginner runner, there’s absolutely no need to drop so much on a shoe. Instead, read our guide for the best beginner running shoes.

In short, the Nike Joyride is a pure gimmick meant to lure sneaker-heads by pretending to be a running shoe. If there was ever a ‘toy’ version of a running shoe, you’re looking at one.

We’ll cover the minutiae of the Joyride Flyknit’s ride quality in this review, but here’s the lowdown if you don’t want to scroll down.

The extreme softness of the Joyride robs the midsole of its ‘running shoe-ness’ in several ways. The transitions feel soggy and bumpy, the stability is poor, and the mushy outsole means that landings and push-offs feel like a lot of work.

We hate to say this, but as a running shoe, the Joyride makes the VaporMax Flyknit look good.

The Flyknit upper is like any other –  elastic and snug-fitting. There’s a bit of the Nike Flex 2019 RN in the layered heel design.

Though both the models have translucent midsole chambers, the two couldn’t be more different.

The VaporMax has a firmer, grippier ride than the Joyride and also has a more comfortable upper fit. Yes, we just called the VaporMax’s ride ‘firm’ in comparison – that’s how soft the Joyride is. 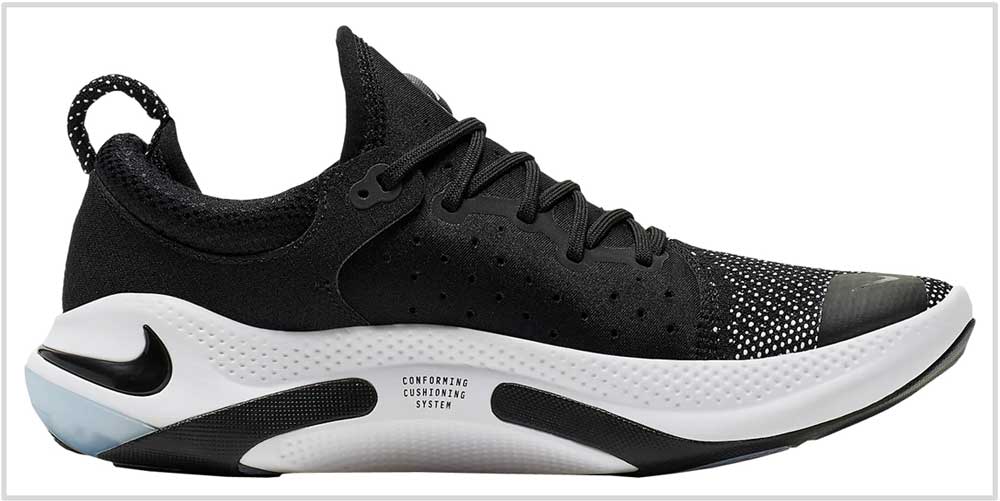 For Nike, the idea of putting small beads in a midsole is a new one. The Joyride has no precedence in the Swoosh’s footwear history, but outside it, the bead business isn’t a novel idea.

We can think of a couple of examples. The Reebok Harmony Road 2 had ‘Kooshride’ cushioning, a molded bunch of tiny, macaroni-like polymer pieces. The 2017 Puma Jamming was closer to the ‘tic-tac’ aesthetic of the Joyride, enclosing thousands of foam pellets inside a transparent midsole.

So the Nike Joyride is the third of its kind, but a completely different one at that.

The ride is very soft – more so than any shoe that exists in the market today. The entire midsole is filled with thousands of TPE (Thermoplastic Elastomer) beads which compress and spread out when stepped on.

Nike uses SR02 for the foam section of the midsole, a compound which feels like an ultra-soft version of its Cushlon foam. From a density perspective, the SR02 is a good fit for the squishy feel of the TPE beads. In the sense that the densities of the beads and midsole casing are evenly matched.

Plushness isn’t the same thing as softness. The TPE beads feel squishy, but you won’t get the plushness of say, memory foam or similar materials.

Unlike other Nike models with transparent midsole chambers, the ones on the Joyride are not pressurized. The transparent heel and forefoot sidewalls yield easily when loaded.

The top of the midsole lacks a firm layer. The TPE beads are contained in a textile pouch, and there’s a non-removable insole and lasting atop it. This also means that washing the Joyride is not advisable – unless you plan to spend hours trying to coax the water out of the midsole using a hairdryer.

The absence of an insulating layer above the chambers makes the underfoot experience lumpy even at walking speeds. You sense the separate compartments under the foot pushing upwards, though this sensation eventually subsides. 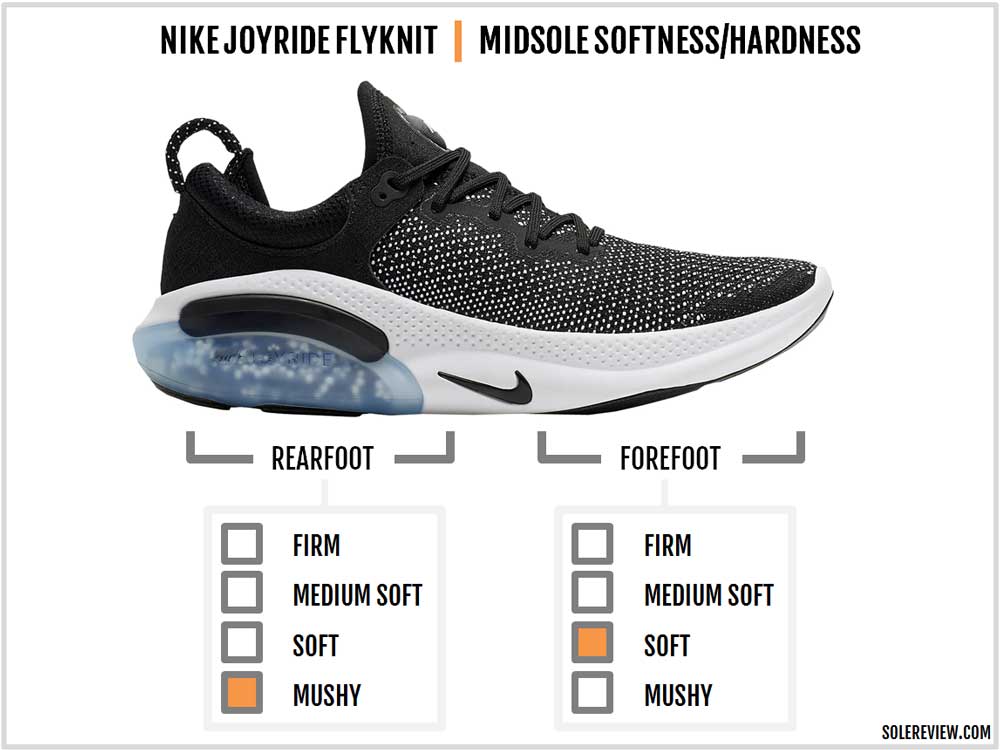 The lack of rearfoot stability is concerning – if you intend to use the Joyride as a running shoe, that is. As we said, the chambers aren’t pressurized, and the SR02 pillars are too soft to be supportive. It’s like running on deflated Nike Air bags filled with foam beads.

Transitions happen sluggishly as the foot moves from one soft part of the midsole to another. A long time ago, one of our readers described an overly mushy shoe as if ‘running in molasses’. That also applies to the Nike Joyride.

It’s not only the lack of a firm top layer which makes running in the Joyride a lot of work; the outsole is equally to blame. The forefoot outsole is soft and so is the heel. Since the Joyride’s outsole is all show and very little function, there is no rubber where it matters.

For example, the forefoot center has a squishy, bead-filled chamber so you don’t get a planted base to push off from. This design also results in an average grip, though there’s no slippage over dry running surfaces. 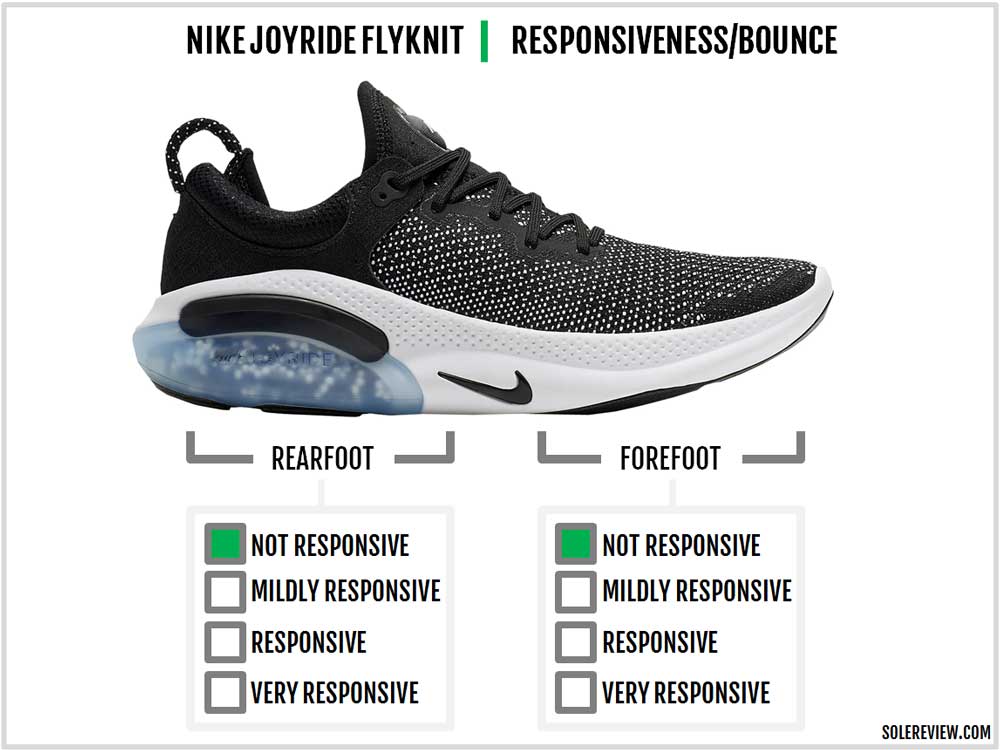 Responsiveness or energy return is also missing. One of the physical properties of a responsive material is to have a resilient structure which compresses and rebounds quickly.

In contrast, the TPE beads are loosely scattered in a non-pressurized chamber. So the midsole feels softly cushioned, but in a flattish way. If the TPE beads were fused (cue the Boost), then this story would have had a different ending.

As a lifestyle sneaker, the Joyride is fantastic. The muffled softness of the midsole reminds one of those cushy foam slippers sold at airport stores. We love the softness of the SR02 foam during standing or walking.

It would be interesting to see Nike use that in their slides and sandals if not doing so already – the Nike SolarSoft sandals feel similar to the SR02 though. 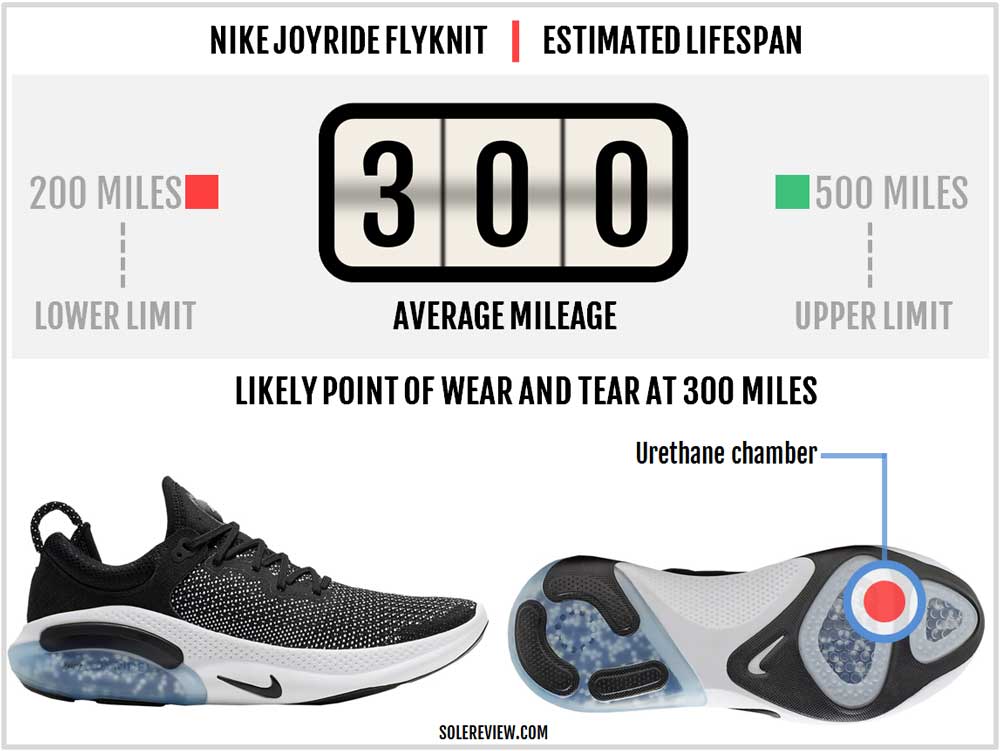 It’s too early to say. The transparent Urethane section of the outsole looks fragile but we’d reserve our judgment till we have more data. For now, we’d say that around 300 miles is a fair ask. 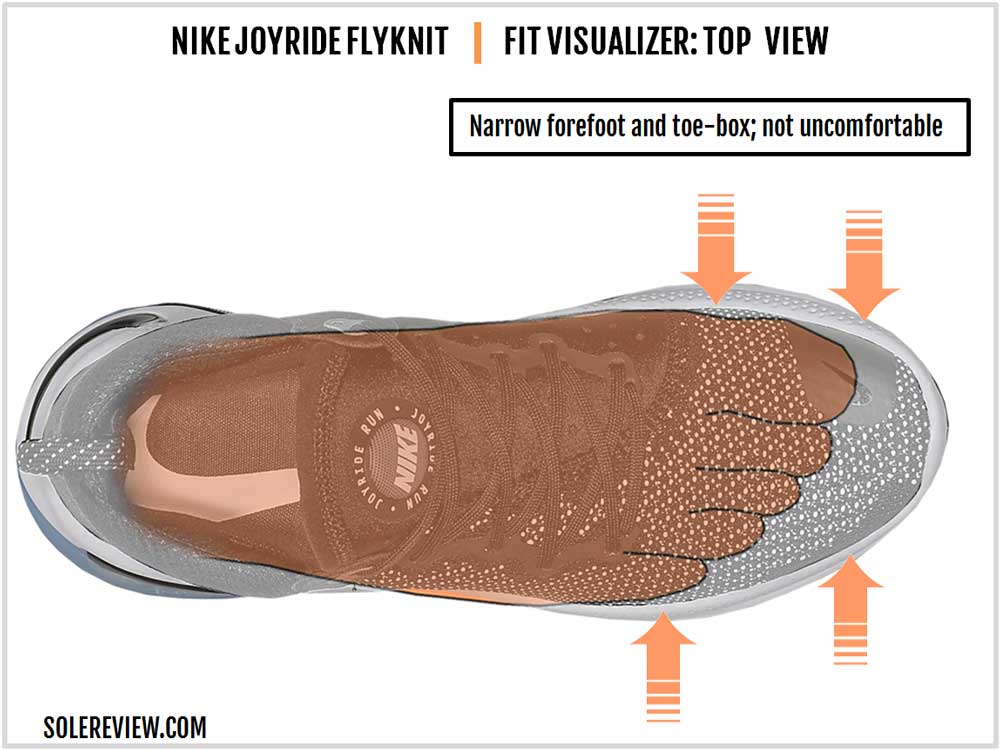 The Joyride’s Flyknit upper has a shallow toe-box and a narrow forefoot – which is reminiscent of the first generation Flyknit uppers.

The elastic mesh wraps around the foot tightly but without being uncomfortable. The shallow toe-box is reinforced with a welded overlay which means that there’s not a lot of upwards wiggle room. 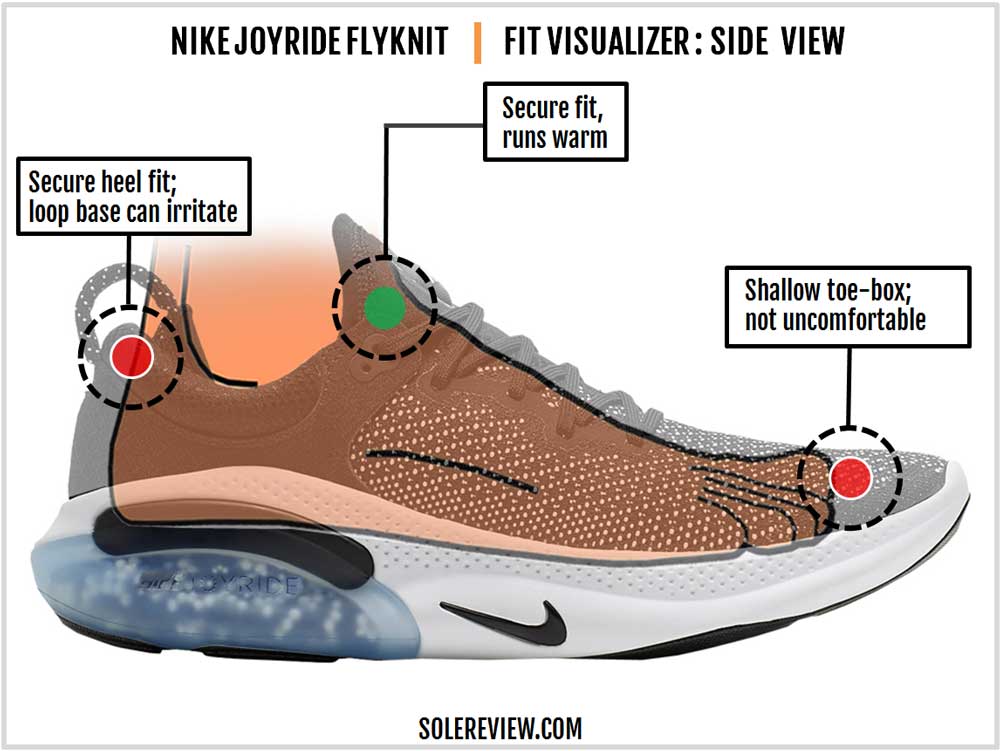 The midfoot and heel lock down the foot with confidence. The inner midfoot has a fused panel for support, and the lacing doesn’t get just lip service here. The Joyride gets a fully functional lacing, complete with a lacing row which is connected directly to the heel clasping system.

The soft, thin, and stretchy tongue is part of an internal bootie system. The upper has two layers clasping the heel; the first is the one directly in contact with the foot – this sock-like layer joins the heel and tongue together. The second layer has the padded collar on top and connects to the lacing.

We don’t recommend wearing the Joyride barefoot, though. While the upper includes a useful heel loop for easy entry, the strap it is mounted on turns inside the heel. This can potentially irritate the bare skin, so you should always wear the Joyride with a pair of socks. This situation is a bit like the LunarEpic Flyknit which we reviewed a few years ago, if you know what we mean.

It’s interesting to note that the ultra-secure upper tries to compensate for the shortcomings of the midsole and outsole. The snug and secure-fitting upper attempts to induce ride stability by pinning the foot down against the midsole.

For this very reason, we do not recommend buying a half size larger unless you find the fit to be excruciatingly uncomfortable. With a more relaxed upper, you’ll also lose the cushioning feel of the TPE beads.

With all the layering going on, the Joyride’s breathability is average. The heel and the midfoot do not allow a lot of air to pass through, and the Flyknit mesh is thick to begin with. 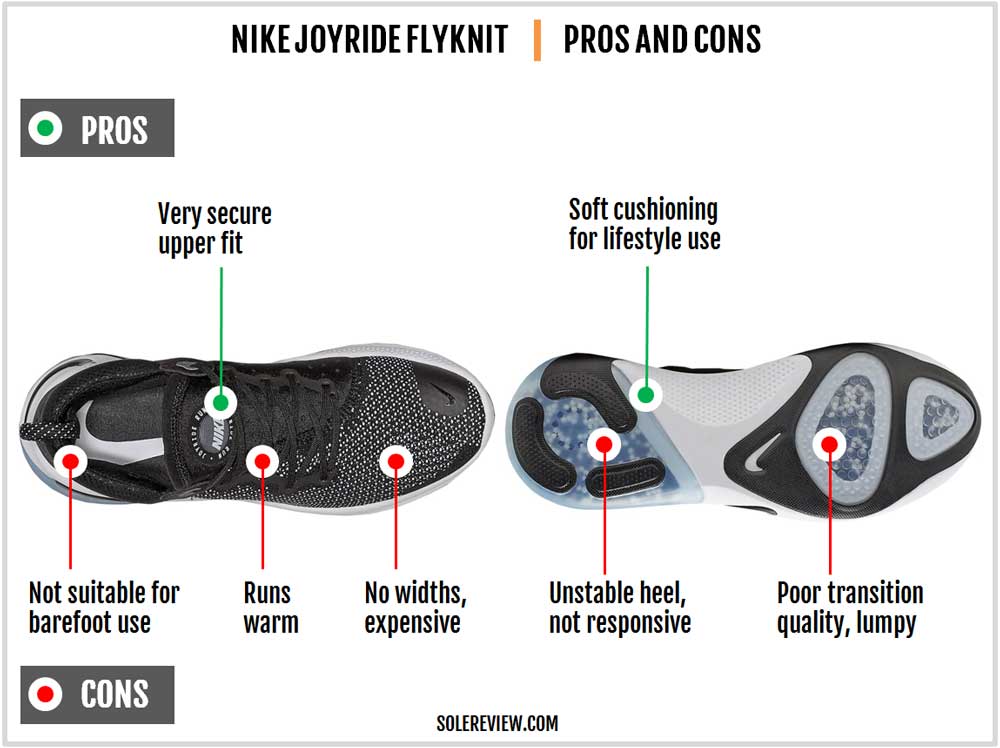 When worn as a lifestyle sneaker, you’ll like the soft and comfortable ride of the Nike Joyride. The upper, while narrow, has a secure fit with reflective bits.

When placed in the context of performance running territory, the Nike Joyride is riddled with unwanted traits. The transitions are energy-sapping, and the ride feels slow and lumpy without a lot of springy responsiveness. And less said of the stability, the better it is.

The upper doesn’t breathe very well and lacks optional widths if you wanted a less constrictive fit. You gotta watch out for the stitched-inwards heel loop as well.