The New Balance 1500 returns for the sixth time, bringing with it a brand new fit experience and a redesigned midsole that tones down the medial post. At its core, the V6 is (still) a great speed running shoe.
Non intrusive medial post, efficient ride and transition quality, breathable, widths
Bring back the thicker insole, please 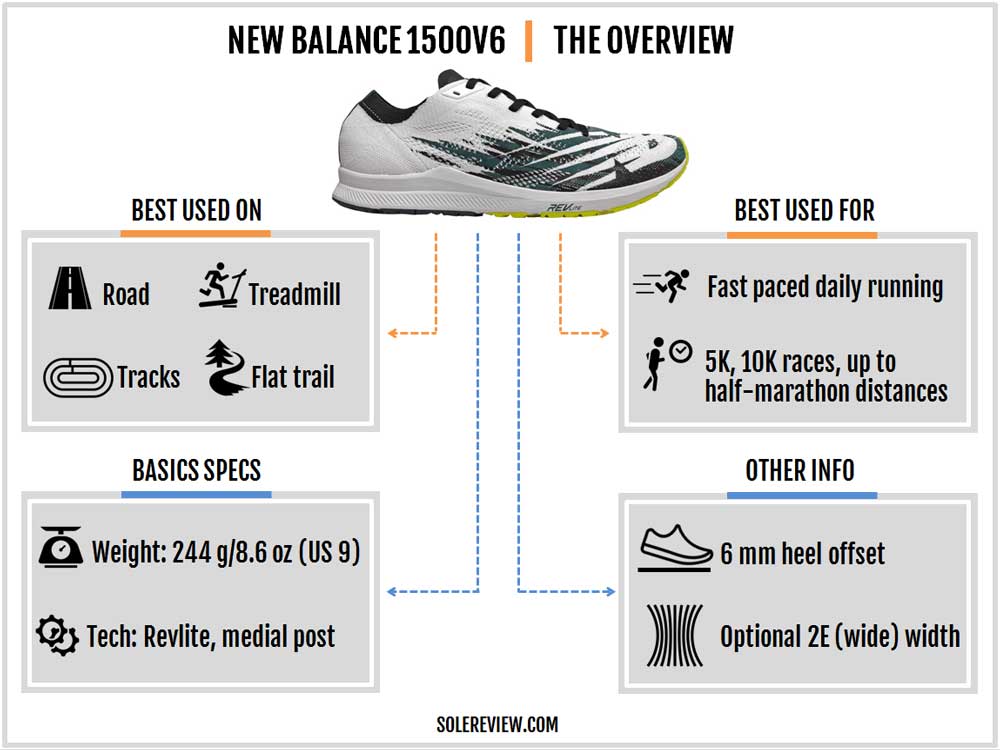 The original 1500 made its debut in an era when stability running shoes with medial posts were still the force to be reckoned with.

So when the first generation of the New Balance 1500 hit the shelves, it entered a niche that was occupied by only a few. The Saucony Fastwitch was one, and the Asics DS Trainer was another.

And what is this niche we speak of?

This category is home to road racers with a medial post or its equivalent. A ‘mild support racer’ describes this segment – because speed shoes with a stability feature are uncommon.

And yet, these are changed times.

It’s not just about the slow decline of the stability shoe category. The industry trend and the consumer expectation(s) on how a shoe should look and feel like have also evolved.

With a new knit upper and a midsole that tones down the medial post, the completely redesigned 1500V6 is a sign of the times.

From the outside, it’s virtually unrecognizable from the past versions. At its core, you get the same speed-friendly ride experience and a non-intrusive medial post.

The 1500 versions 1 to 5 had a midsole with distinctly recognizable design. The outer sidewall had a sculpted style with sharp, angular grooves. On the inside, a small and blocky piece of hard foam gave the 1500 its ride signature.

You’ll get efficient firmness from the V6 too, except that it is served in a different flavor. The medial post adopts a less aggressive design. Instead of being a rectangular wedge, it is sloped and confined to the lower part of the midsole.

The outer midsole has raised sidewalls – if this evokes a sense of Déjà vu, that’s because the 890V7 has something similar. The outsole geometry has been reworked as well.

There are fewer flex grooves in the front and rear. In its place is a larger outsole with tiny perforations that expose the foam under the forefoot.  The weight is up by 0.3-ounces or 8 grams due to the greater coverage of outsole rubber.

The upper follows the 890 template and uses knit mesh with nearly no overlays. Though the forefoot fit has just the right proportions, some runners might not prefer the new heel design. The rear upper substitutes the padded heel of the V5 with a knit band and suede lining.

If you were dreading a drastic change in the 1500V6’s ride quality, you’ll be relieved to hear that there is no cause to worry.

Even with the sweeping updates, the 6 mm drop midsole has a ride that you’ve come to expect from this series. The firm Revlite foam has a consistent underfoot feel that helps when you’re running faster than 7 min/mile or 5 min/km. One doesn’t have to expend energy trying to work through the softness – for the 1500 has very little of it.

Versions 1 to 4 had a thick removable insole that added some amount of pop and step-in cushioning. It was replaced with a thinner footbed on the last year’s V5, and the V6’s insert is similar. The insole is also perforated, so that further dials down the softness. 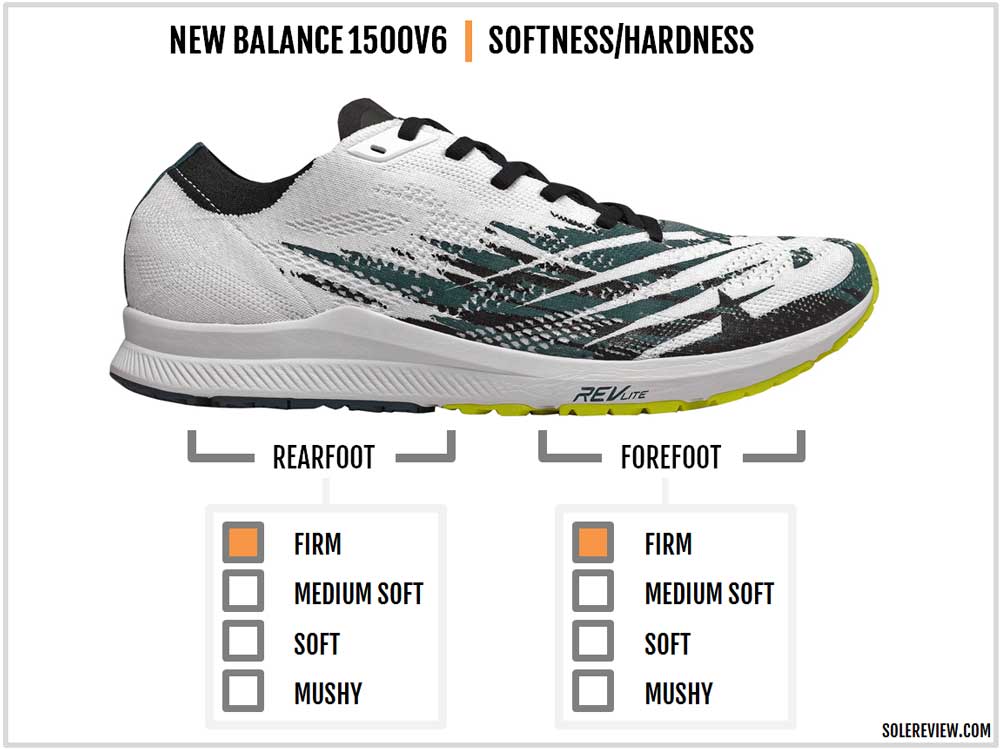 The insole isn’t the only reason why the V6 is slightly firmer than the 2019 model. The new outsole leaves out most of the flex grooves – this includes the ones on the outer heel and forefoot.

The transition groove under the heel is narrower and lower to the ground than the V5. With the heel flex grooves mostly gone, the rearfoot landings feel stiffer. The narrower groove decreases the softness to a certain extent, because it doesn’t splay as well as the V5 when weight-loaded. 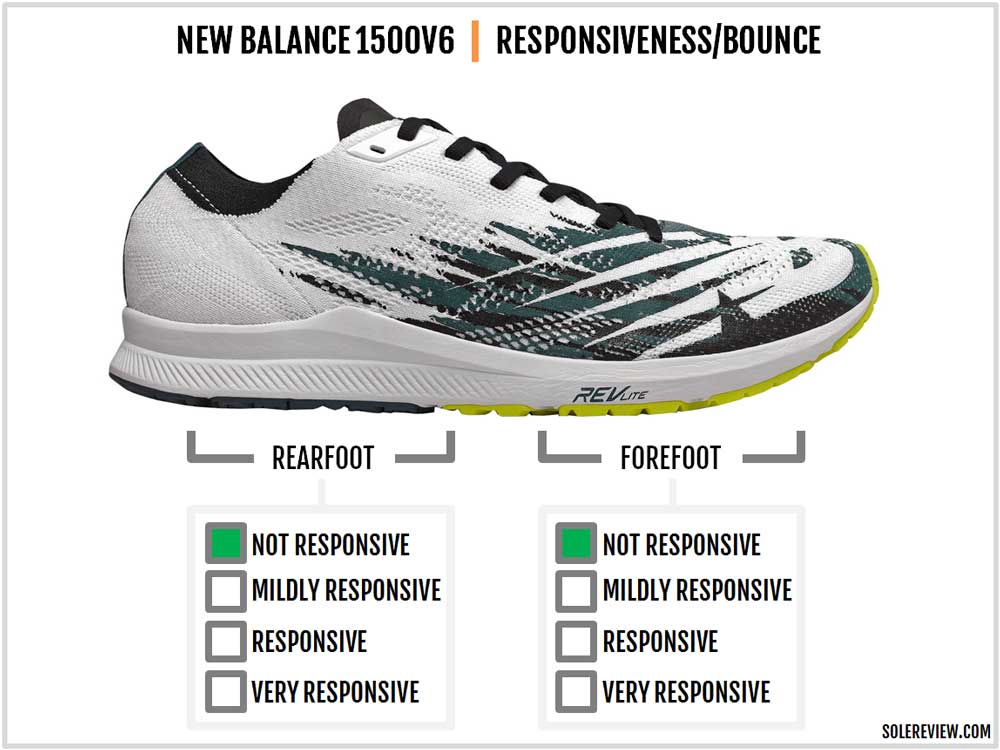 Responsive isn’t a trait that the Revlite midsole has. The foam feels mostly flat, and whatever little responsiveness one got from the thicker insole (used in V1 – V4) is no longer a part of the package.

The lack of rebound (contrary to New Balance’s claims) isn’t a negative. The low-profile firmness enhances the ground feel – and thus, the efficiency of transitions.

At the same time, this is nothing like the adidas adios or Reebok Floatride Run Fast, so rein your expectations. Besides, if you have run in the 1500 before, then the V6 is more of the same. No surprises here.

The biggest change on the 1500’s bottom is the medial post redesign. If the earlier versions were barely noticeable, the V6’s medial post does a straight-up disappearing act.

It isn’t the blocky wedge you saw on the V1 – V5; the new medial-post is a curved slope that is surrounded by the lower-density Revlite midsole. This tones down the 1500’s ‘motion control’ feel  – something that was minuscule to begin with.

The outer midsole has a raised sidewall like the 890 for support. Everyone’s doing the ‘Guiderail’ thing, so might as well do it on the 1500.

Forefoot flexibility is smoother. The previous generations of the 1500 had a forefoot outsole with deep flex grooves. As a result, flexibility was excellent yet confined to the grooves.

The 1500V6 has no forefoot grooves and instead uses a perforated outsole layout. Tiny windows are spaced between the lugs, so the bending process takes place evenly. However, it takes a week or so to fully break-in the V6’s outsole and midsole.

On the flip side, the larger and smoother outsole lugs lack the bite of the older design. Traction is still excellent but doesn’t possess the ‘extra’ grip of the ribbed outsole.

The plastic midfoot shank is also gone. Outsole rubber fills the spot where the shank used to be. As a sum of parts, the 1500V6 is more business-like and feels faster than the V5 due to the increased coverage. The weight goes up by 0.3-ounces due to these tweaks.

From a use-case point of view, the 1500’s place in the running shoe ecosystem is well-defined.

5K to 10K runs and races at quick paces (7 min/mile or 5 min/km and faster) are the 1500’s wheelhouse. You can run up to a half marathon or even longer but that depends entirely on your tolerance, body weight, and overall mechanics. 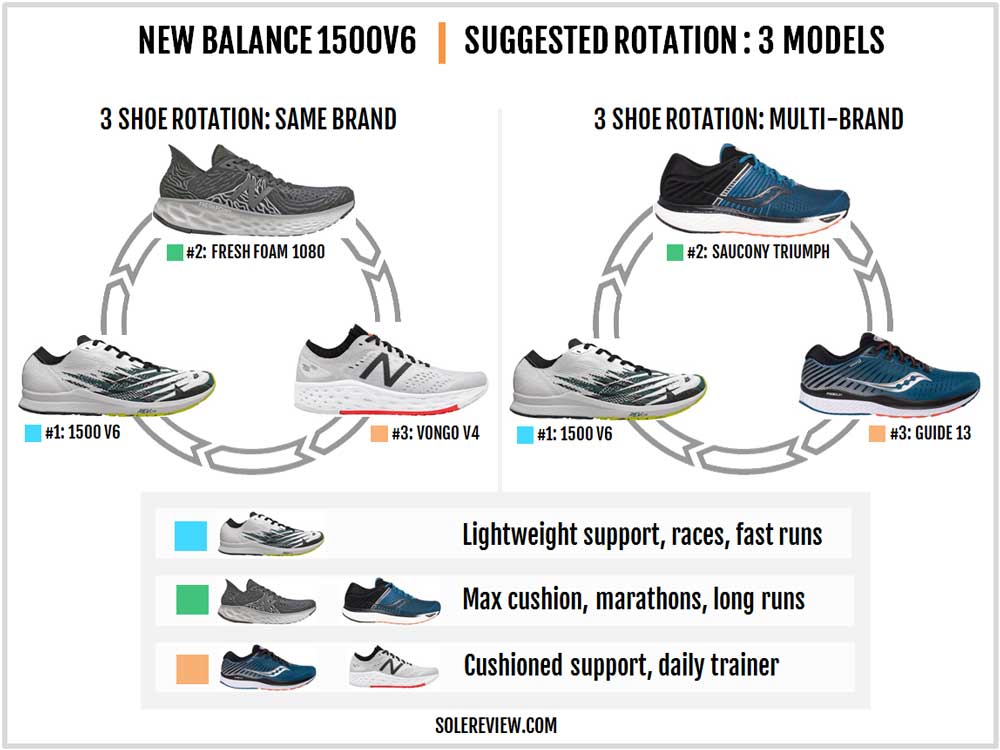 Most runners will want something cushier for long-distance runs, and the 1500 isn’t the shoe to give you that. Even for daily training, a more durable and cushioned shoe is easier on your feet.

For example, you could look at the New Balance Fresh Foam Vongo V4 or Saucony Guide 13 as your daily trainer. For long-distance runs and marathons, ultra-cushy models such as the New Balance 1080V10 and the Saucony Triumph 17 add value with their cushioned and responsive midsoles. 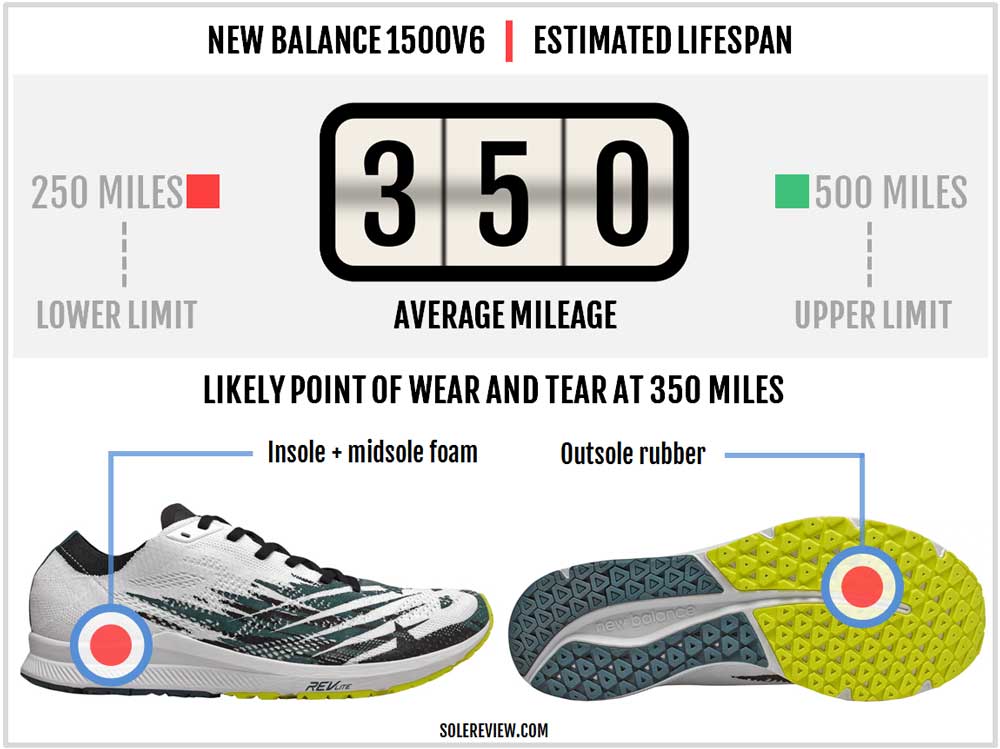 After a few hundred miles on older 1500 design (V1 to V5), the foam around the hard medial-post would compress and make the latter more noticeable than it was on day 1. This shouldn’t be a problem with the V6 due to the low-slung medial wedge.

The outsole lugs have a flatter profile and are spread over a larger surface area. This helps spread the wear and tear more evenly to slow the outsole wear.

We don’t foresee any concerns with the knit upper. 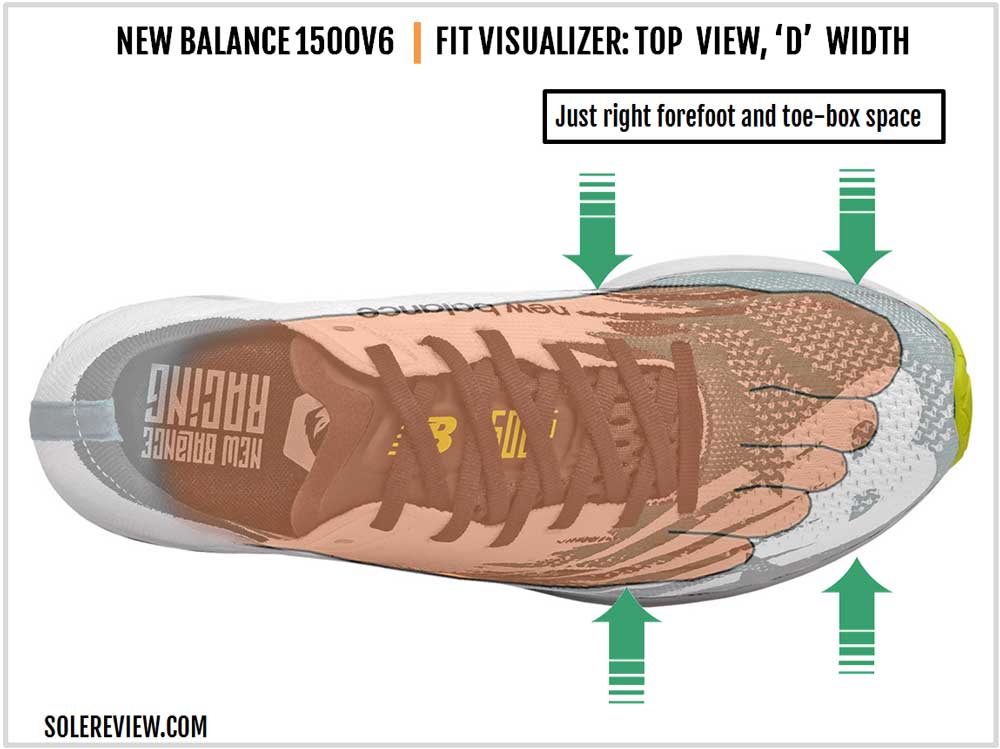 Conversely, a half size larger is appreciated during longer runs; (half-marathon types) the extra space will result in a more comfortable fit experience when running for an hour or longer.

Regardless of the sizing, the forefoot fit is just right. While snug, it isn’t too tight like how some racers are. A 2E (wide) is optional if you have broad feet. The non-elastic knit mesh has pores on the top for functional ventilation.

New Balance changed the 1500’s tongue to a flat racer design beginning with the V4. The sixth iteration has a racer tongue too – except that the flap design is now asymmetric for a better placement against the instep. The edges are made of a soft synthetic suede so you don’t have to worry about the flap biting into the foot.

Note: The 1500V6 NYC edition has a loop going over the tongue flap. The standard 1500 does not get this treatment.

The tongue top now has a foam padded section to prevent lace bite. This is helpful because the lacing near the top is wider than the front. This is new for the 1500V6; the V5 had evenly spaced eyelets. Here, the distance between the center eyelets is around 20% greater than the front three rows.

This new variable lacing set-up could have potentially created unwanted top-down pressure, so adding the padded filter is a nice design move.

The midfoot lockdown is excellent. The tongue is held down by a sleeve, and the high density of lacing (6+1 rows, same as the V5) helps secure the foot. Along with the gusset, a smooth synthetic suede material is bonded to the knit mesh for support. 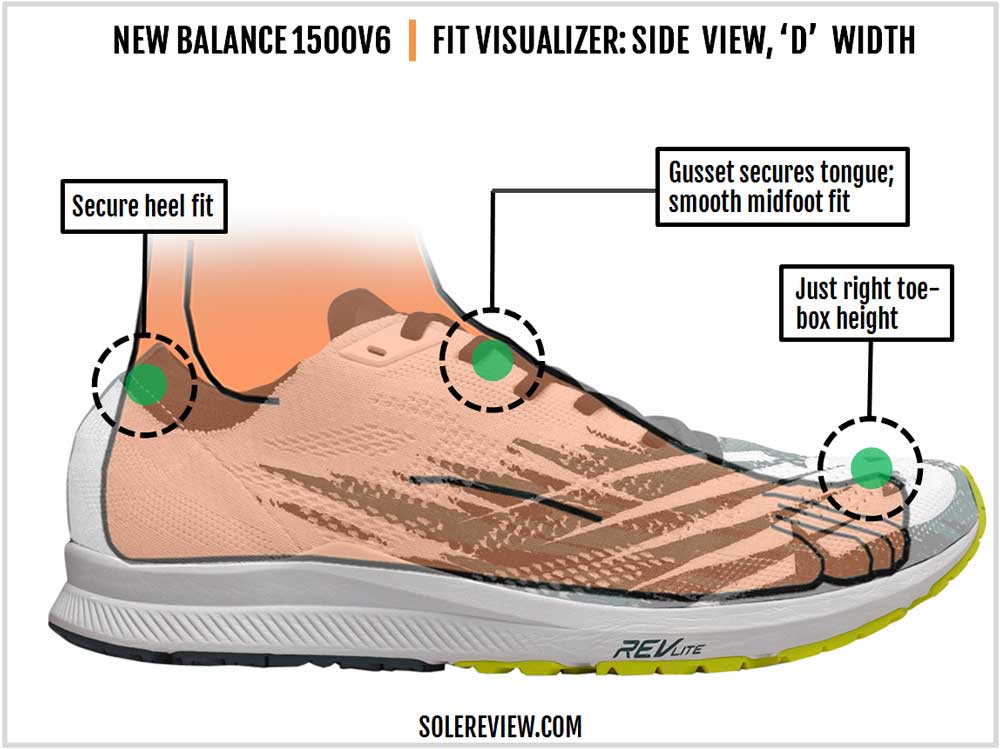 The 1500 gets the 890V7 heel treatment. The padded collar is replaced by an elastic knit band and a synthetic lining with minimal padding. There’s no slippage; the inwards facing band locks on the heel very well and prevents sliding.

And just in case you find the heel grip lacking, there’s always the seventh row of heel lock lacing to fall back on. 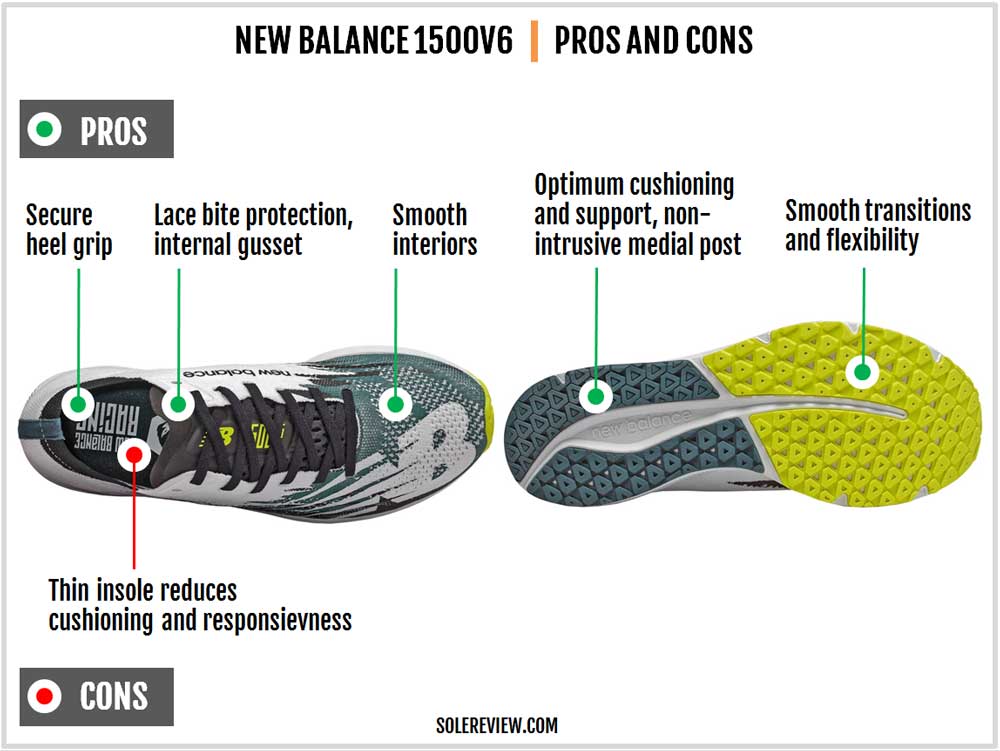 Even with the suite of updates, the 1500V6 continues to be a competent road racer. The reworked medial post blends in effortlessly into the midsole and is not distracting at all. The upper interiors are smooth and breath well; the padded tongue top is a nice touch.

The ride is forgiving for a road racer. The 1500 isn’t a pure flat so 5K and 10K runs are less harsh on the feet. The firm Revlite and the updated outsole make the gait cycle quick and effortless. 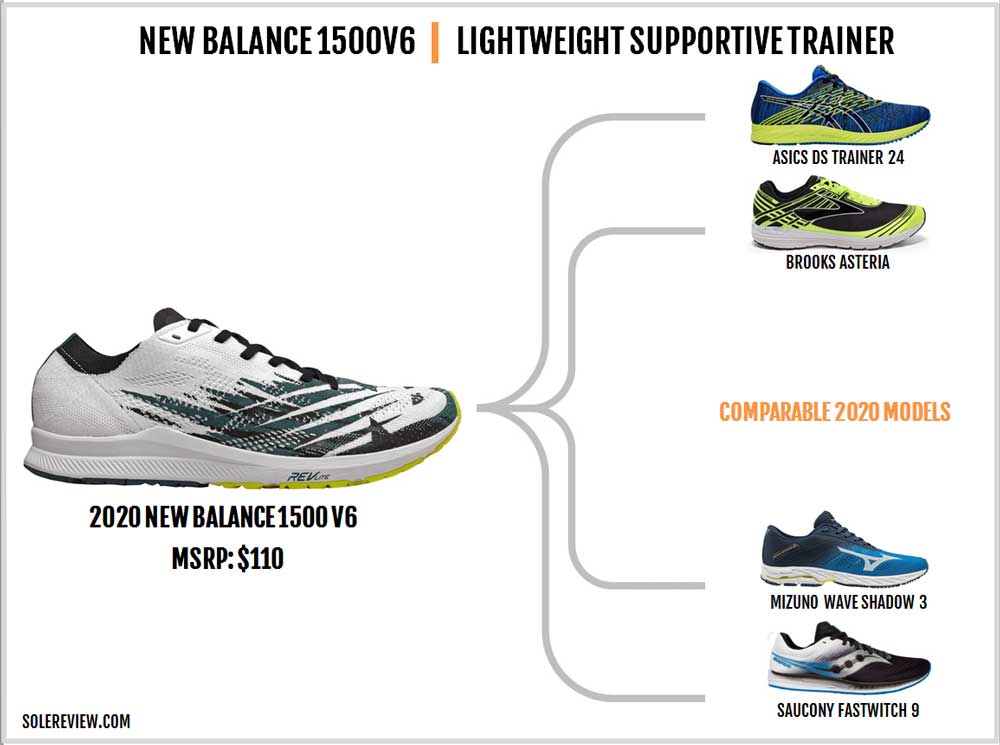 As we said at the start of this review, there aren’t many competitors in the stability racer class.

The Saucony Fastwitch 9 is very similar to the older versions of the 1500. The Fastwitch has a 4 mm drop, a larger medial post plus a padded collar – if that’s what you’re missing on the 1500V6. The $10 cheaper Fastwitch doesn’t sell in a wide though.

The Brooks Asteria is another mild-support racer with a higher offset of 8 mm. On this Brooks racer, the medial post is two-sided; it wraps around the heel instead of being just on the inside.

You’ll find greater ride comfort in the medially-posted Asics DS Trainer 24. It’s got more midsole foam for a higher level of cushioning, and a soft, spacious upper with an ultra-smooth fit.

There are neutral racers that are just as supportive. The Mizuno Wave Shadow 3 comes to mind; the plastic Wave plate keeps the rearfoot stable during speed runs.