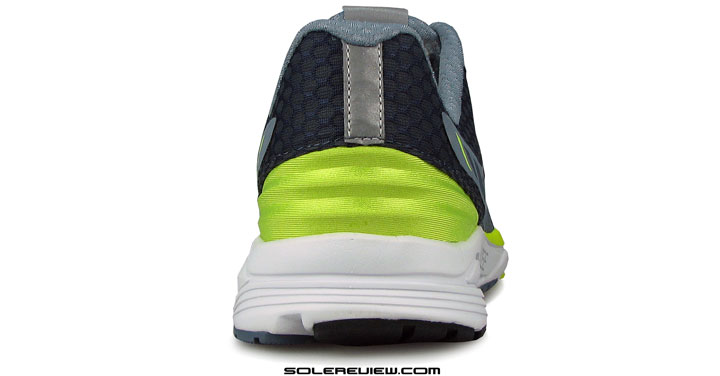 If online sources are to be believed, then the Vazee Pace has a similar midsole thickness to that of the 1500 and the Zante. Only firmer.

There’s actually plenty of midsole available on the Vazee Pace, notwithstanding the lack of a soft feel. Compared to the NB 1500 V1 and Zante, the Vazee has similar stack heights, so there’s ample foam volume to pad your landings and transitions.

Additionally, the central groove tends to splay out under weight, doubling up as a cushioning agent. The discussion won’t be complete without mention of the Vazee Pace’s outsole.

The Vazee Pace’s outsole layout. Plenty of exposed channels, and a combination of softer blown rubber and harder wearing compound on lateral midfoot and heel. 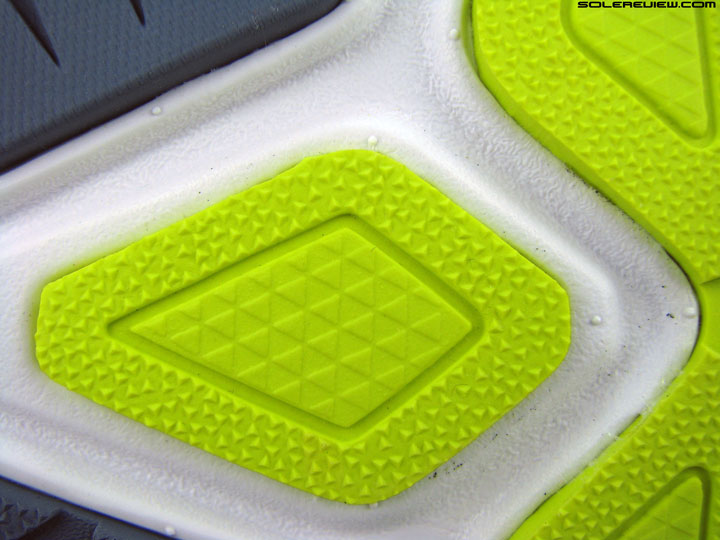 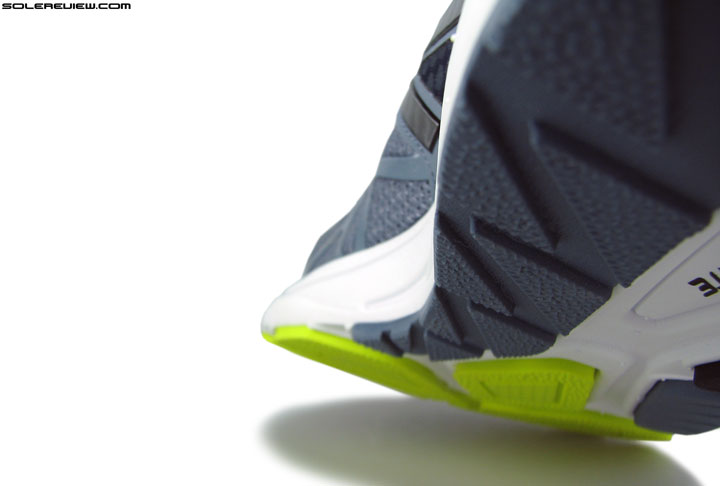 The medial outsole is made entirely of blown rubber. Softer transitions from heel to toe, or the other way around.

Except for the lateral heel and midfoot, which is overlaid with harder carbon rubber, the rest of the outsole is made with soft blown rubber. This is very similar to how the 1500 V1 is designed. That said, the variation in design like larger exposed grooves and flat textured pod-like lugs reduces the efficacy of outsole grip. The Vazee Pace’s forefoot has wide, exposed flex grooves compared to the 1500 or Zante, so the padding isn’t as seamless as the other two.

The soft rubber spread includes the entirety of medial heel and 100% of the forefoot. If you’re a rearfoot striker, you will likely land on the harder outside edge, then quickly transition to the softer side, all the way to toe-off. 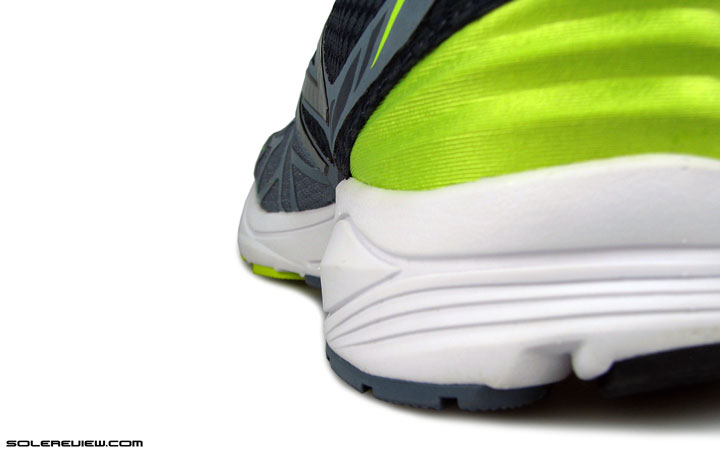 The medial midsole has a protrusion – a ‘medial post’ of sorts? 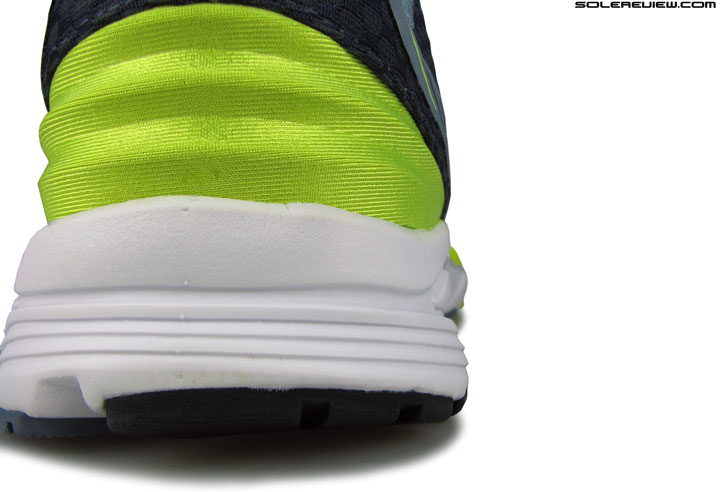 The midsole base has a flare, helping create a supportive ride.

The Vazee Pace lives up to its name, delivering a fast, snappy ride. It is also very supportive, with a broad midsole base flare and sidewall design. The medial sidewall even has the equivalent of a ‘neutral medial post’.

The heel vantage point will reveal the medial midsole molding which extends outwards, in contrast to the recessed design of the lateral side. 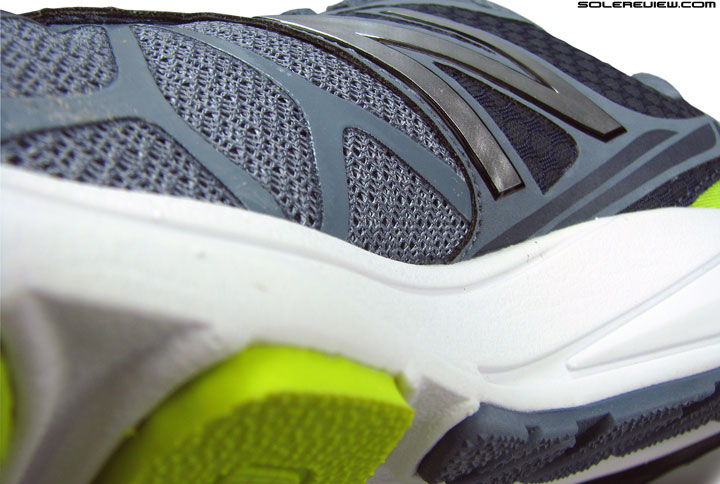 The midsole waist is slim, leading to an acute under-arch curve.

The shoe’s obvious areas of competence aside, can it go long, say more than 10 miles? It depends on how sensitive you are to the midsole edge pressing into your under-arch side. The Vazee has a slim mid-foot waist, which means that the midsole curves sharply inwards.

Most of us will tend to weight-load over the curve. Over longer runs one experiences a sensation which can be best described as a dull under-arch soreness. Since this is temporary, many of us will confuse this with plantar (sole) fatigue. But know that this is the Vazee Pace’s midsole edge working its way into the foot.

And why wasn’t this felt on the Zante or 1500? The Zante had a softer midsole, and its rims did not rise high on the sides. That took care of any pressure spots, and the Zante had a thicker insole. The 1500 V1 had firmer raised midsole rims, and yet the foot was relatively insulated by the thicker Zante insole. 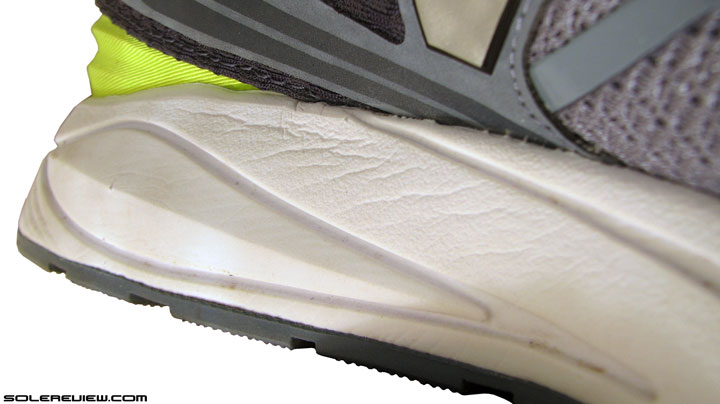 See those crease marks near the midsole edge? That’s the place where the foot loads on the midsole. You feel it over longer runs.

The Vazee Pace has a much thinner insole, and that causes the midsole edge to be felt under-foot. Here’s a picture of compression creases developing under the arch area after a few runs – proof that the foot does weigh heavily on that spot. 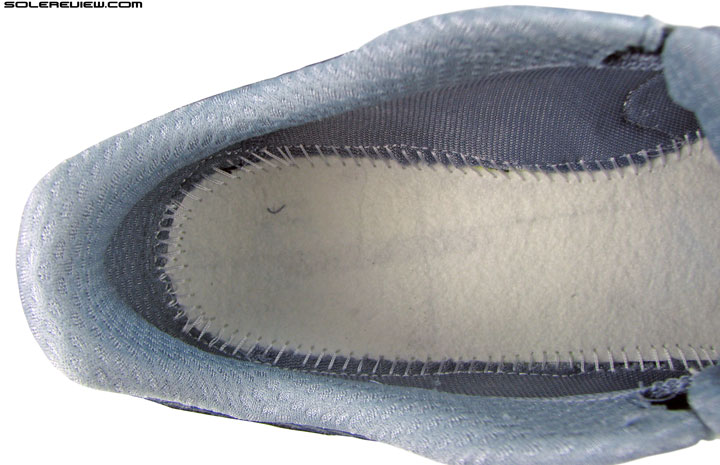 There’s no foam in the lasting like how it is on the Zante and 1500. The Vazee Pace uses a woven fabric instead with a smooth texture.

The reverse insole is devoid of any texture, and tends to slide over the smooth strobel fabric underneath it.

Another thing which could be improved on the Vazee Pace is its strobel material. Unlike the Zante and 1500 which use a foam strobel, the Vazee uses a woven fabric with a smooth surface. Considering the fact that the Vazee’s insole has a smooth back – unlike the honeycomb ribbing  on the other two models. On a related note, the insole and strobel combination is one of the factors gives the Vazee Pace a very firm ride quality.

The bottom-line is that we’ll not recommend running in the Vazee Pace longer than 10 miles in its stock form if you find the under-arch area noticeable. To make it mileage friendly, swap the default insole with Zante’s or 1500’s. It would also help to apply some Gorilla glue between the Vazee Pace insole and the strobel to prevent slippage.

It looks similar to Elite 8, right?

So generally it’s a better shoe for You? I’m curious about durability. What I really dislike in Elite is soft blown rubber in the front of the outsole. For me carbon rubber in Pegasus is much better/durable and after about 600 km in both Nike shoes I can’t see any advantage of softer rubber. I wish Elite 9 will be lighter, softer under the heel and more durable in front.

Durability should be on par. Both shoes use softer blown rubber under the forefoot, the Vazee Pace more so.

Thanks for quick reply.

hello solereview!! Just to let you know that I would love it if you guys could review the new NB 1080s and the Saucony Triumph ISO 2s somewhere in the future!! They seem to be quite cool and packed with some serious awesomeness, but a professional opinion like yours would seriously help me in my purchase decision process. Cheers!

As for the Triumph ISO 2 review, it is already online! Use your login creds to access it here:

Thanks for the excellent review !
I have the Vazee Pace and would like something with a bit more cushion and better heel support. I have high arches and a very narrow mid foot – difficult to find a shoe that fits. Any suggestions would be appreciated.
Happy New Year !

The Nike Lunaracer 3 might be just right. Its midfoot is Flywire cord based, and grips very well while providing lightweight cushioning, more than the Vazee Pace.

And have a great new year too!

Thanks for the suggestion- I’ll try on the Lunaracer. How does it compare to the Lunartempo ? I tried it but the arch support was minimal.

Our LunarTempo review has a section on comparison versus the LR3 :)

Thanks again ! I’m thinking of trying the Vomero 10 based on your review. Do you think it has more arch support than the Lunaracer ?

The Vomero 10 is great, but the midfoot wrap isn’t as snug as the LR3. You have a narrow midfoot, so the V-10 might not be the shoe for you. No harm in trying, though.

I like the Pace, but i was also curious in trying out the Vazee Rush. I think the Rush is worth of more attention, since it is a very capable shoe too. Both, the Rush and the Pace, are very close siblings, nethertheless they are a bit different. If someone wants a lightweight shoe with a fast feel, but better suited with allround qualities for daily running, the Rush is in my view a sound option. The Rush is overall slightly more cushioned (forefoot and heel feel more padded, still on the firm side but by no means harsh) and supportive, maybe a bit softer than the Pace, but the midsole has still a fast and responsive feel (firm bouncy, if that makes sense?). I would describe the ride as a mixture of the Pace and a firmer Kinvara. The grade of cushion is also somewhat comparable to the Nike Lunaracer/Lunartempo, maybe a bit firmer.

Thank you for the feedback! We’ll see whether we fit the review of the Rush in.

Too much arch support, didn’t work out for me on longer runs. Though I like the relatively high toe box.

Hi there – thanks for the great reviews. Can’t believe I’ve only found this site now. Hoping you could offer some advice. I’m a slow, neutral runner (130 pounds; half marathon best of 1hr53min; 10km 50min), been running for over 10 years in traditional shoes with no injuries. Got hold of the NB Fresh Foam Zante last year and fell in love; they “disappeared” on my feet, my running cadence and style changed and my times all improved vastly… have run through 2 pairs now. But I find that I can only really run them up to about 30km. I’m looking for a higher mileage shoe for marathon and ultra-marathon distance now. I’ve tried the Brooks Ghost (hated them) and am now in the Pegasus 32. They’re OK, but just feel heavy and as though it is more effort to move my feet and legs. Trying to increase cadence and run lightly is a real effort. Any ideas? Was hoping the Vazee Pace might do it but doesn’t sound promising.

50 min 10k isn’t exactly slow, so you should give yourself more credit!

You’re right, the Vazee Pace won’t cut it. That said, you might want to consider the New Balance 1080 V6. We haven’t reviewed the shoe yet, but fellow shoe reviewer Sam Winebaum has good things to say about it. You can ask him a question if you like, too:

Thanks for this. I hadn’t actually considered the 1080 because I always thought of them as the same as the Ghost/Pegasus (slow, heavy, heel-striking, cushioned). But perhaps I should give them a look, maybe I have been wrong about them.

Should add that 50min is my fastest 10 km (run in the past year, in the Zantes) and my average would be 56/57mins, and would run a LOT slower pace over marathon and ultra distance. What do you think about something like the Zoom Elite?

We haven’t tested the 1080, but would love to hear your feedback.

The Zoom Elite is super firm, do not recommend considering your requirements. Instead, get an adidas Boston Boost for a blend of cushioning and durability.

Thanks for all these great reviews, very thorough and a real mine of information – it really helps to understand what is being offered (or claimed) by the different companies. I enjoy just reading them even if I have no particular interest in the shoe.
Anyway, I am currently shuttling between the glide boost 7 and the adios boost 2 and really enjoy running in both. But these vazee pace seem interesting and a friend suggested they might be up my street (and I’ve just spotted a very good online offer!) – I run at about 4min/km over 10k, 4.15min/km over 20k.
I was wondering what your thoughts were on how these sit in relation to the adios or boston boost?

The Vazee Pace has a nice, consistent spread of fit – the adios 2 is comparatively narrow in the front. In terms of cushioning, the Vazee is somewhere between the adios and Boston.

Thanks. This does sound good. Think I’ll add them to the mix.