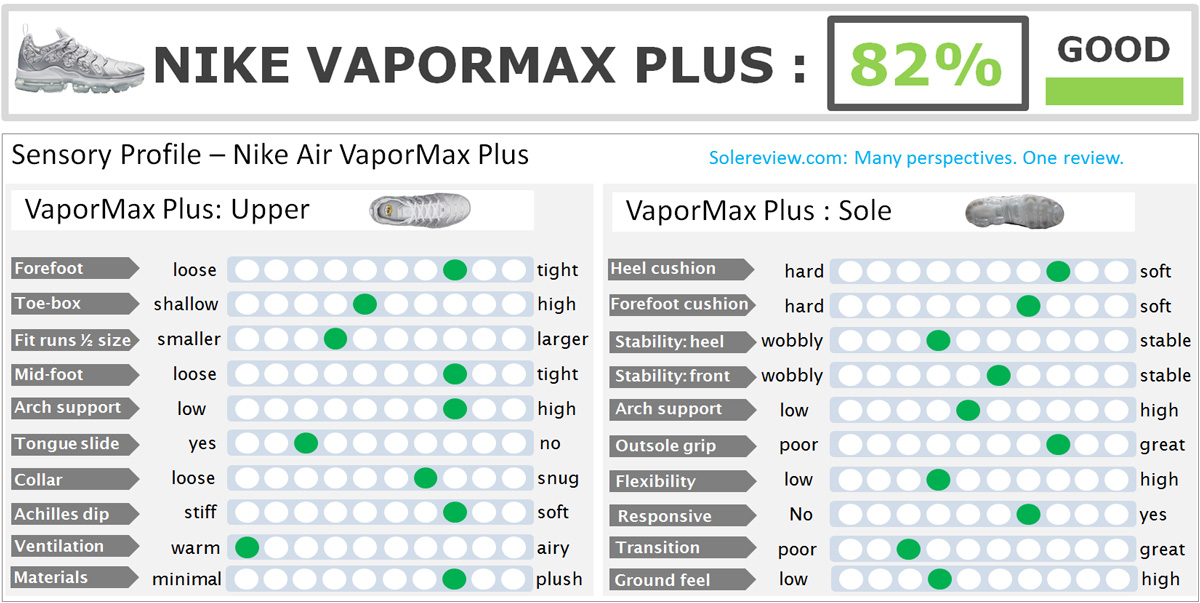 This modern interpretation of a retro shoe is the result of marrying the 1998 Air Max Plus upper to a Vapormax midsole. We see the point, though.
Lightweight for a full-length Max Air shoe, reflectivity, warm yet comfortable upper fit, outsole grip on road and dry concrete sidewalks
Expensive, no widths, noisy outsole 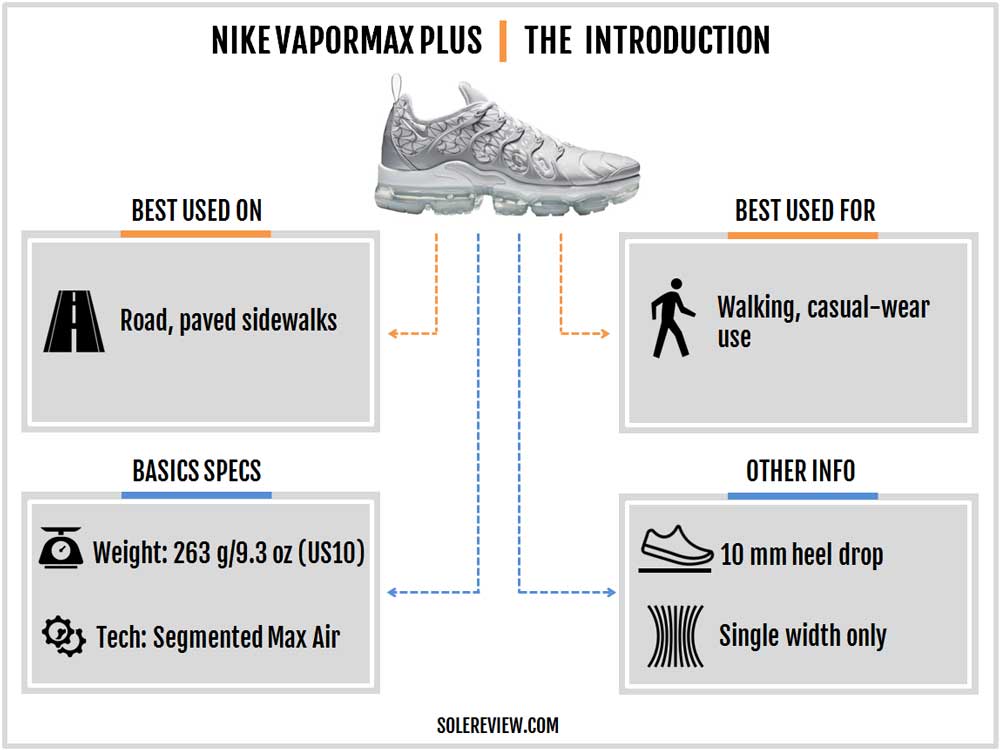 A retro-fusion approach to footwear design is working well for adidas and Nike.

We discussed this in our adidas NMD review. The gist of it was that combining vintage style and contemporary materials made a lot of commercial sense.

Retro has always been a well-selling staple category (admittedly, with its ebbs and flows), so it becomes far easier for a brand to recreate something new based on what’s familiar. We’ve had a few of these over the past years; another recent Nike which comes to mind is the React Presto.

And it’s not merely about style; a modern cushioning system eliminates the performance drawbacks of retro sneakers and makes them more comfortable.

The Air VaporMax Plus is a great example. The upper is an homage to the 1998 Air Max Plus while the midsole unit is a modified version of the one used on the Flyknit VaporMax version.

While the retro original was based on a stiff and heavy Polyurethane midsole, the modern retelling of the shoe is softer and 3 ounces lighter.

With this lifestyle sneaker, Nike has done a great job recreating the Air Max Plus. You get the unmistakable AM Plus detail, and the sole unit even features the ‘Whale tail’ shank from the original model. Even though both the models are placed twenty years apart on the sneaker timeline, the resemblance is uncanny.

The upper is comfortable albeit warm and narrow. The VaporMax sole unit is similar to the one used on the Flyknit version but with minor differences.

As a whole, the Air VaporMax Flyknit is a comfortable sneaker for casual use. There are a few shortcomings but no deal-breakers.

THE NIKE AIR VAPORMAX PLUS VS. VAPORMAX FLYKNIT

Styling aside, sizing is the where the VaporMax Plus differs the most from the Flyknit model. The Plus has a thick, non-stretchy mesh which makes the upper narrower and warmer than the Flyknit.

The ride is softer because the Plus uses a foam midsole over the stiff midsole. The insole is softer too, for the VaporMax Plus’s footbed doesn’t have the stiff base of the VM Flyknit’s insole.

Otherwise, the pod midsole of both the shoes produce a similar cushioning experience. The stability is higher on the Flyknit model due to its lower-to-the-ground construction; the foot sits relatively higher on the Plus. 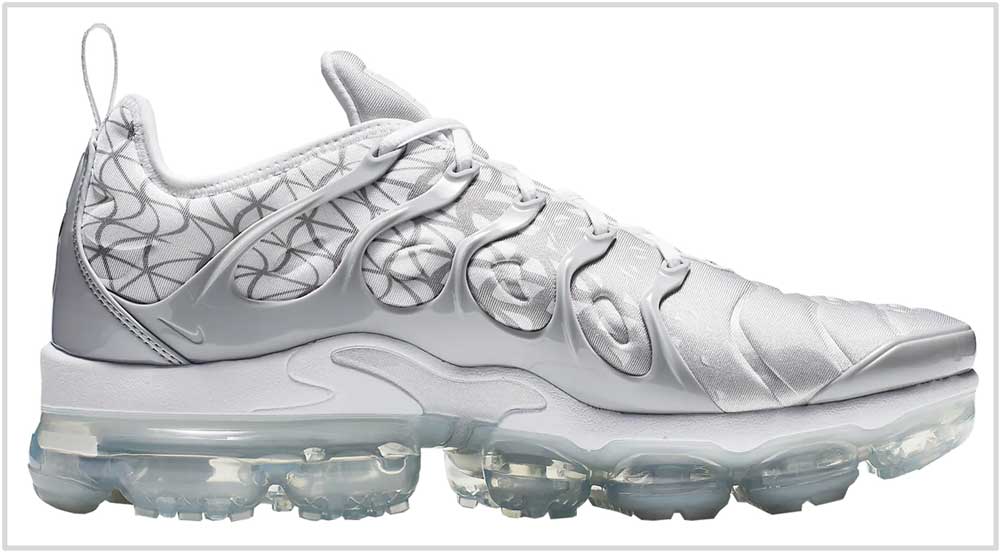 If you’ve already read our write-up on the Flyknit V-Max, then this section will sound familiar.

Except for the midsole foam topping and a more pliable insole, the ride experience is similar to the VM Flyknit and VM 2019. This Max Air midsole relies on pressurized segmented pods to deliver cushioning. 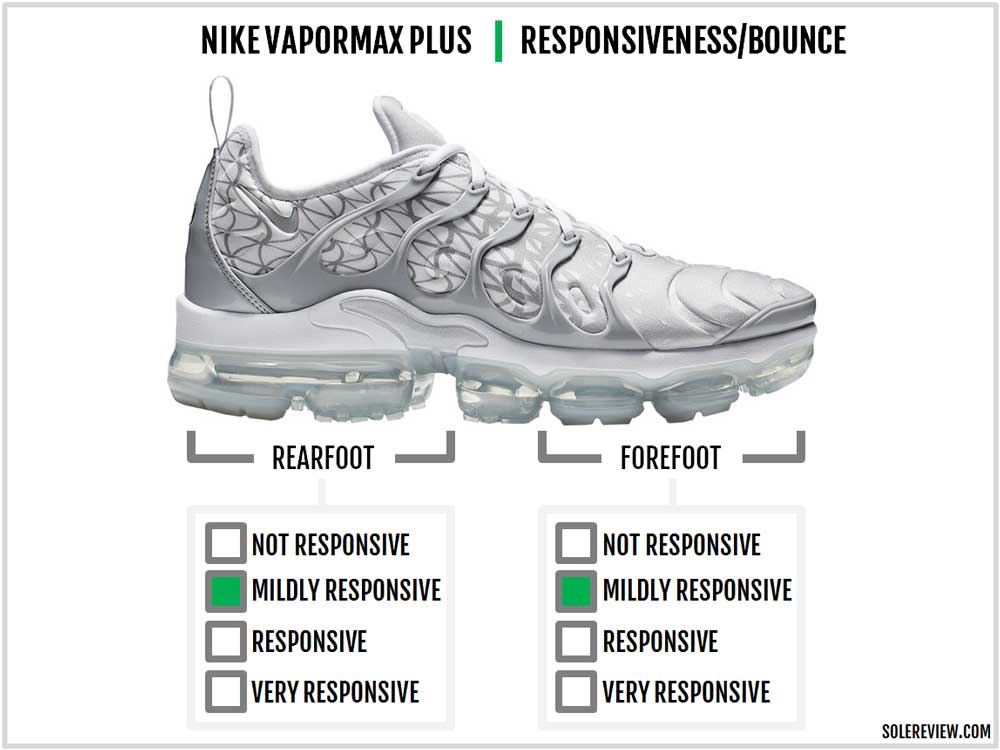 The front and rear have independent chambers of gas, so the compression quality is zonal. You can feel the individual chambers compressing when you load on them. This sensation is more pronounced in the rear due to the higher volume. As expected, most of the softness is packed into the rear.

What the forefoot lacks in softness, it makes up in responsiveness. The sealed, five chambers work independently of one another so they’re tighter sprung and firmer under the foot. 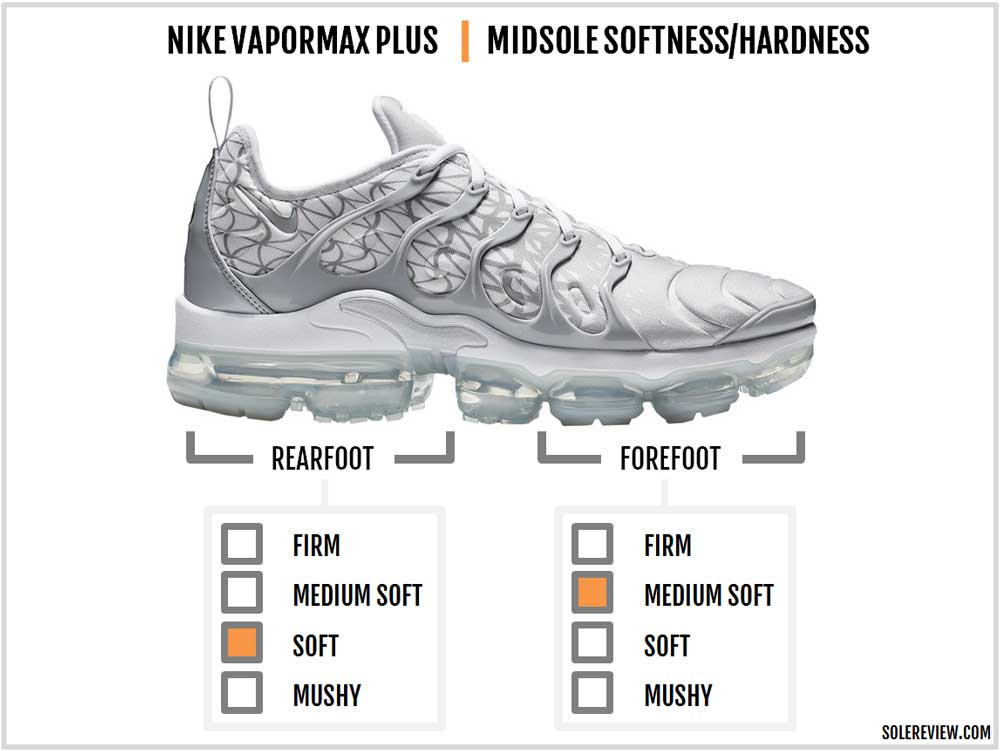 The Plus variant of the Nike VM comes with an extra tier of softness. The translucent midsole is topped with foam cushioning. The insole is soft, pliable, and isn’t a dual-density kind used on the Flyknit version. Here, the insole doesn’t have the firm base because there’s a layer of midsole separating it from the V-Max unit.

As referenced in our review of the VM Flyknit, the pressurized pod design isn’t new in the industry. It’s been done before – both within Nike and outside it. We covered this subject in detail during the said review so have a read when you have the time.

Stability isn’t a trait one associates with the VM. With the gas-filled pods, the level of support is iffy at best. That said, the VM Plus offers better under-arch support feel because of two things – the floating cage and the midsole flare. The AM Plus inspired plastic shank also acts as a support structure.

While we docked points off the VM Flyknit’s score during to its ‘running’ positioning, we’ll go easy on the Plus. Given its lifestyle plug, stability and the quality of transition isn’t as critical.

It is supportive enough for walking, and the outsole grip isn’t found wanting too. The small forefoot lugs grip the road and sidewalks with confidence.

You’ll have to live with the noisy and occasionally squeaky ride, though.

IS THE NIKE AIR VAPORMAX PLUS DURABLE? 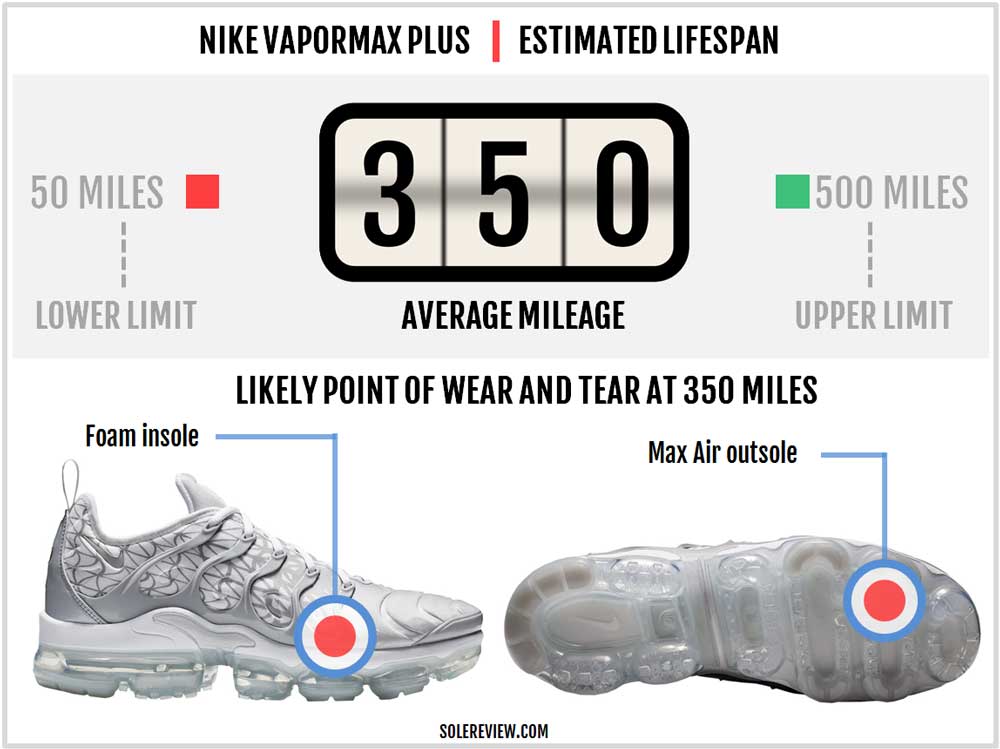 The upper is thick and layered so it isn’t going to tear in a hurry. The VaporMax midsole and outsole should hold for a few hundred miles unless you subject it to high-intensity activities.

A midsole blowout can happen on a small sample, but the rubber-tipped V-Max chambers should hold out for a reasonable time-frame. Say, around 350 miles or more. 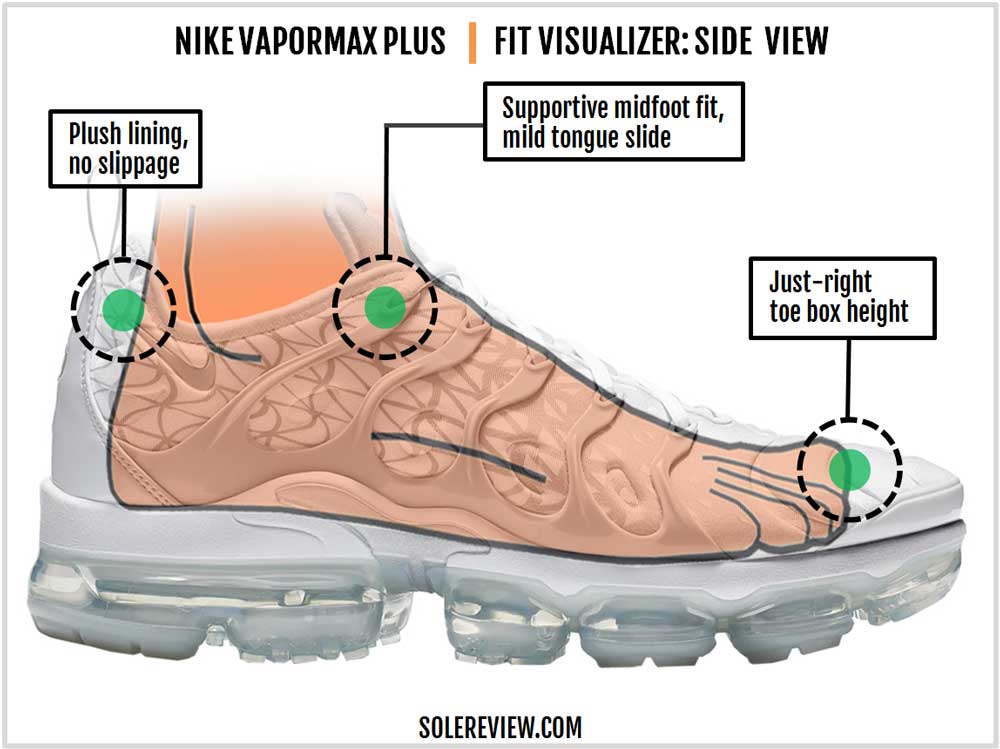 The V-Max plus isn’t short in size but has a narrow fit. Since there are no optional widths, buying a half-size larger becomes necessary for people with broader feet.

The upper narrowness is the result of two factors. The first is the mesh itself, which is a thick and cushioned spacer kind.

Unlike the original Air Max Plus, this modern version doesn’t weld the ‘flames’ over the mesh. Instead, Nike uses a lot of embossing to produce a similar aesthetic by mimicking the path where the welding should have been.

And the embossing is best done on a thick, non-elastic mesh – which the VaporMax Plus uses. So a thick mesh with no stretch makes the upper non-adjustable. It also doesn’t conform to the foot shape over time.

The second reason is the floating TPU overlay. The thick urethane base cups the entire midfoot base and even extends into the forefoot. And then in the front, you have the synthetic toe-bumper. 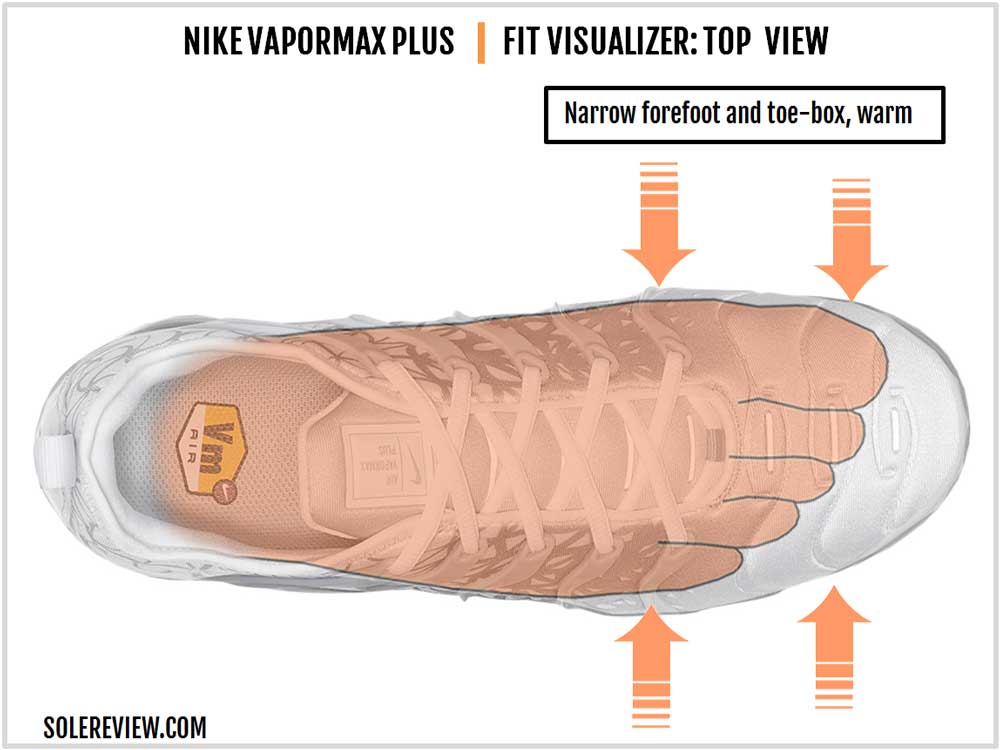 On one hand, the thick mesh and urethane layer makes the fit very supportive. Conversely, this creates an interior that is short on foot splay room and its ability to adjust. The VM Plus is also a warm shoe, but this isn’t a negative thing since we’re headed towards winter.

The TPU extensions are a part of a floating cage, so there’s no side pressure or hot spots, just a sense of overall narrowness.

On the bright side, the cushioned mesh with a satin-like surface (there’s another mesh variant that resembles Neoprene) feels plush over the foot. The insides are incredibly soft so if you can make the fit work in your favor, then the soft upper ends up being very comfortable. That includes the heel too; the insides use a soft-touch fabric over foam padding.

There are a couple of other details picked up from the original Air Max Plus. A column of reflective strips is welded on the front of the shoe, starting with the toe-bumper and leading up to the tongue flap.

And this was one of the distinctive features of the retro shoe. Whereas most running shoes in the ’90’s had reflectivity on the rear, the AM Plus made the front reflective. The V-Max isn’t a performance running shoe, but the reflective strips are useful in an urban environment.

The ‘Vm’ logo callout on the heel and insole is a nice touch. It’s inspired by the similar ‘Tn’ (Tuned Air) branding of the AM Plus.

The tongue slides to the side because there’s no sleeve. But this isn’t a running shoe so it’s not much of a distraction.

As a side note, the Sunset colorway (based on the OG) was a limited release, so the Bright crimson/Hyper Violet is as close you’ll get to the OG AM Plus color without paying the outrageous prices in the resale market. 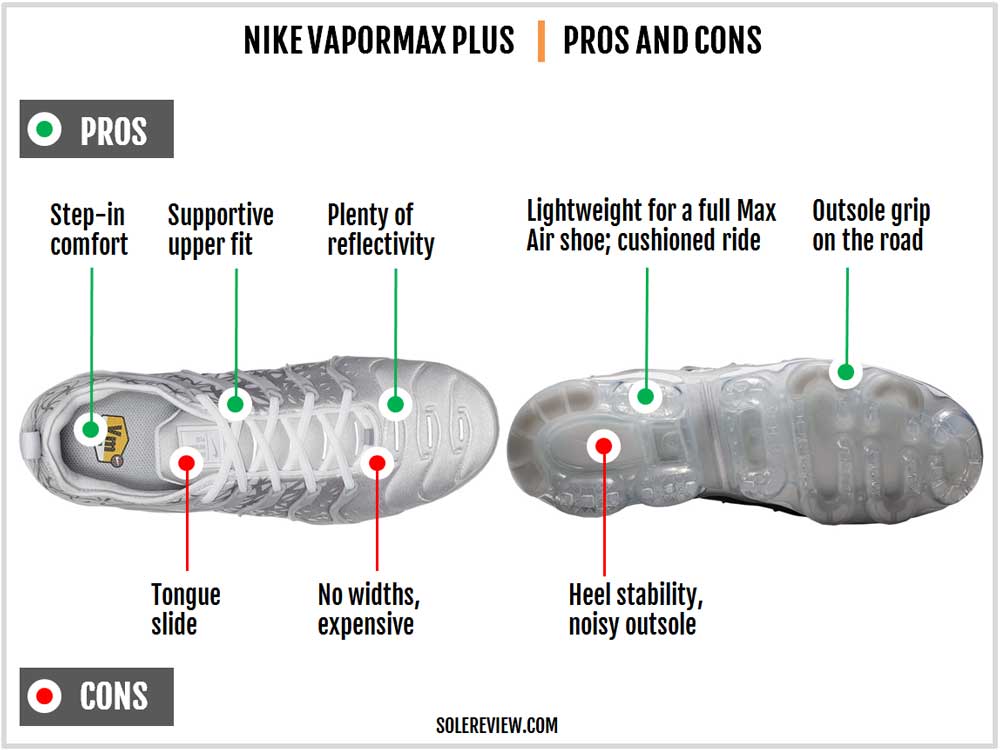 As a lifestyle sneaker, the expensive VaporMax Plus fares pretty well. Marrying retro coolness with its newest cushioning tech results in a stylish shoe which is comfortable enough for daily wear.

The foam and Max Air midsole offer ample cushioning, and the thick mesh upper wraps the foot in a plush – yet narrow fitting – manner. One needs to be mindful of a few minor drawbacks like the tongue slide and noisy outsole.

This is also a good shoe to wear under low-light urban conditions, given how much reflectivity the upper has.

SHOES SIMILAR TO THE VAPORMAX PLUS 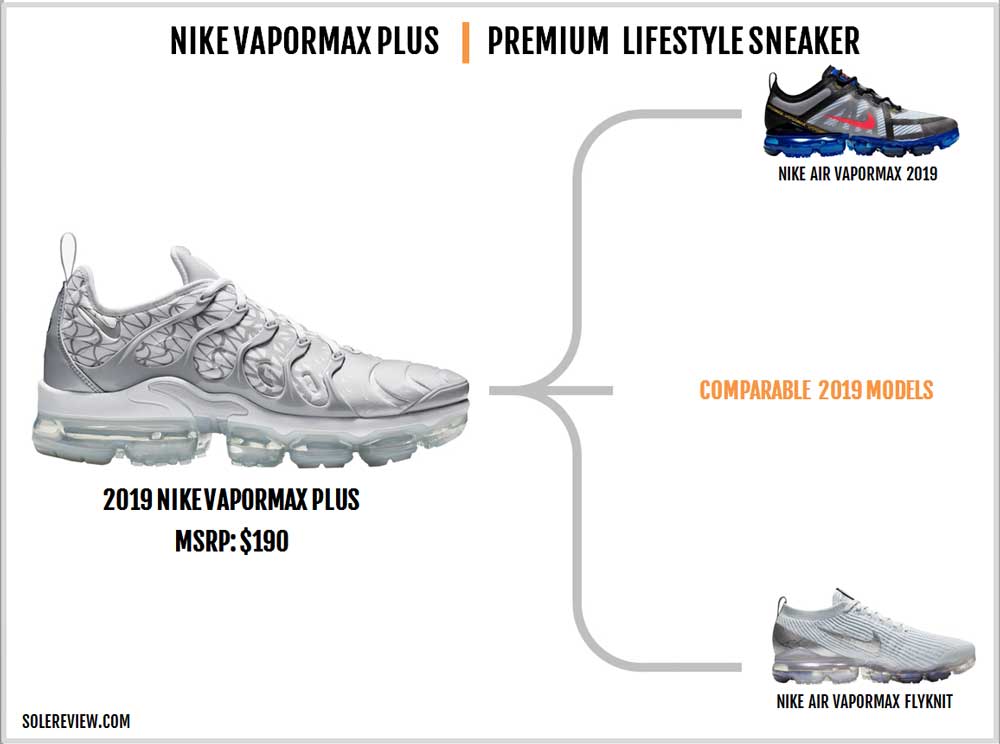 Though there are several variants of the Vapormax, the VM 2019 and VM Flyknit 3 are the most popular – and easily available versions. Both share a nearly identical sole unit, except that the 2019’s forefoot has a bit more structure than the Flyknit.