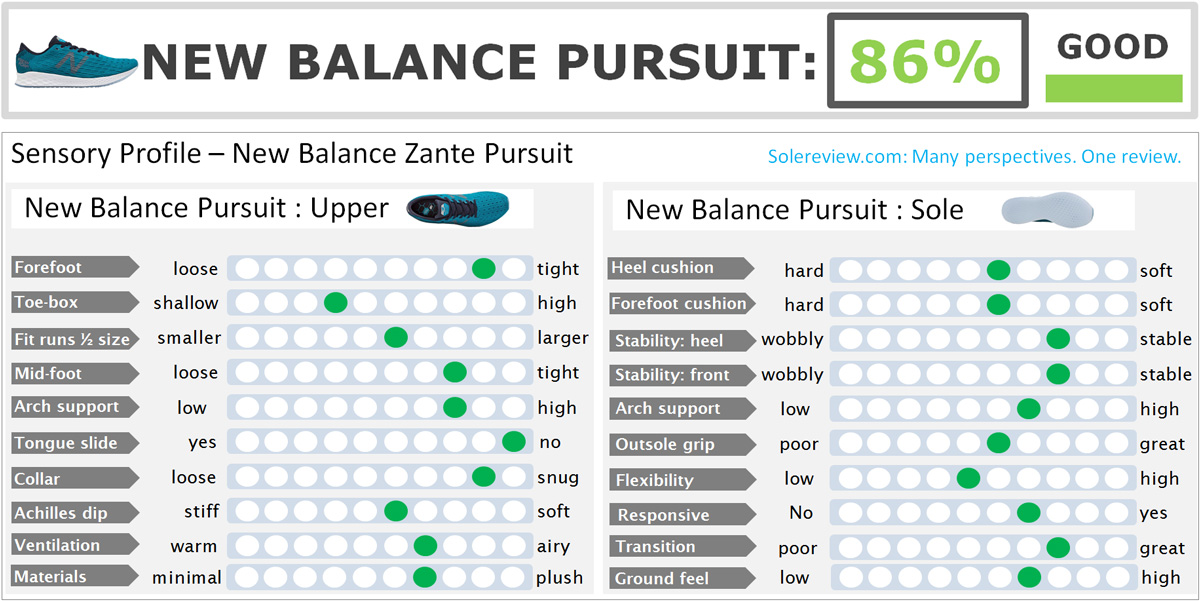 The Pursuit carries the Zante label but it's best to treat it as a different shoe to better manage expectations. The Pursuit is an excellent lightweight trainer for fast runs but with limited versatility when compared to the standard Zante.
Very lightweight, thin yet soft Fresh Foam midsole, outsole durability and transitions, secure upper fit, widths
Limited use-range, the heel fit needs improvement. 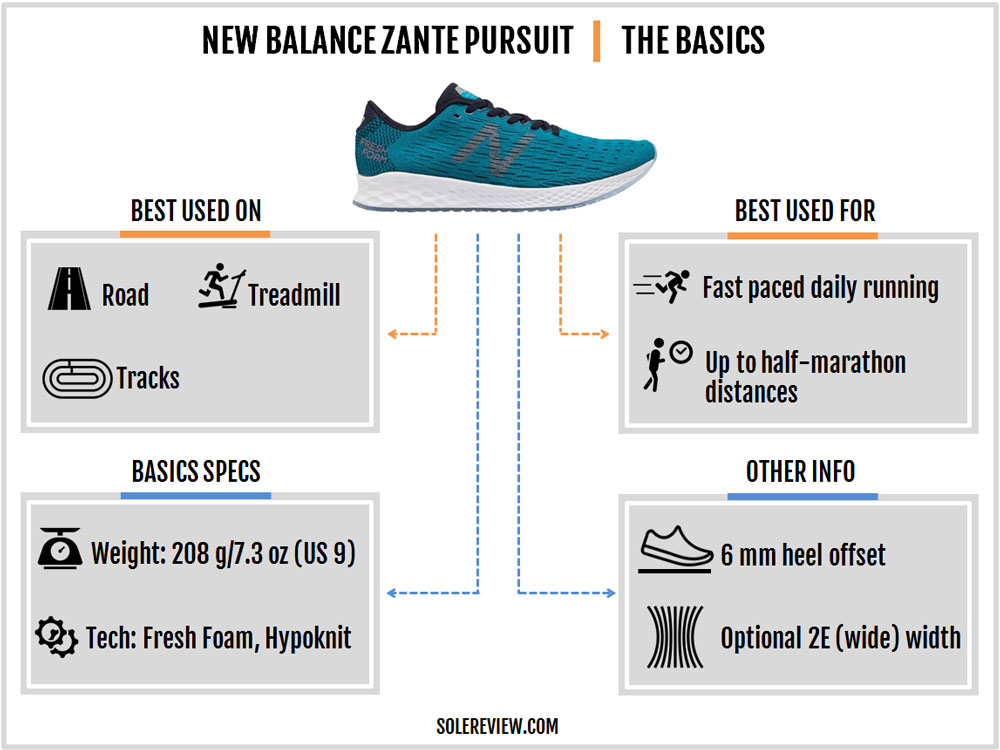 There’s a thing with names and the weight of the reputation they carry.

If two products are labeled similarly, comparisons are inevitable – even if the two differ from one another in style, function, or both.

The Zante Pursuit carries the now well-known ‘Z’ label but it isn’t a direct successor. At least, that’s what solereview thinks.

The Pursuit comes with a thin yet cushioned midsole and a minimal upper, and its sense of purpose is more focused, more direct. Although some of the specs sound identical on paper – such as the $110 retail price and 6 mm offset – the rest of the shoe is an exercise in reduction.

It’s almost as if New Balance threw the Zante V4 into an isolation chamber for a month and fed it nothing but fortified water.

Just look at the upper on the Pursuit. The single-piece knit upper stretches taut over the foot without any of the layering seen on the Zante V4.

Even the midsole and the outsole are thinner. If the stack looks generous in the back, one must also take into account the raised sidewalls which make the midsole appear taller.

All that fat trimming exercise reflects in the shoe’s weight. At just over 7-ounces (208 grams), the Pursuit is more than an ounce lighter than the Zante V4.

So what is the trade-off?

The reduced cushioning depth limits the Pursuit’s range. While one could use the regular Zante as a daily trainer, the Pursuit is best reserved for occasions like fast training runs and 10k races.

That being said, the Pursuit is a Zante for the ages. Just like how the first Zante burst into a jaded running shoe scene with its lightweight and responsive ride, the Pursuit does the same – but in a different time and space. The way we see it, the Pursuit is a 2019 interpretation of the Zante ethos – in more ways than one.

We remarked in our 1080V9 review that New Balance has tweaked their Fresh Foam formula. That also applies to the Zante Pursuit.

The thin midsole is soft, as if the Fresh Foam had more air injected into it. The softness is similar to the Zante OG’s midsole but it feels more fluffy? New Balance has got the midsole formulation down pat with this one. 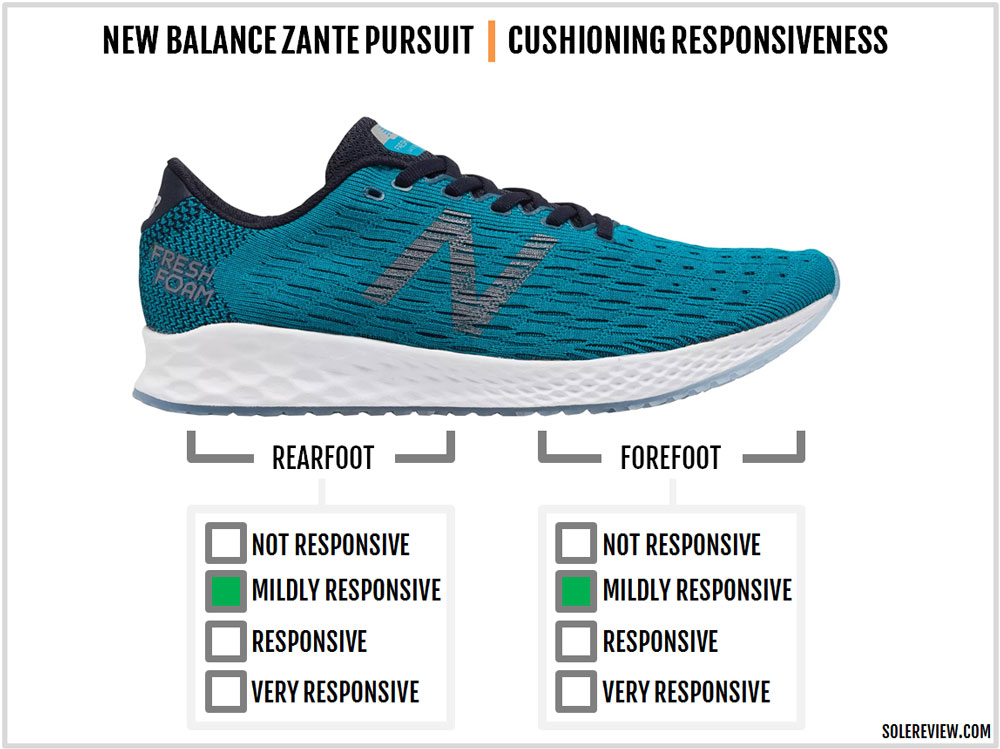 There’s another reason for the midsole give, and this applies to the forefoot. It is visible when seen from the outsole; the forefoot midsole has laser-cut holes through its stack. This scooped out section makes the foam easier to compress, all while making the shoe lighter and more responsive. 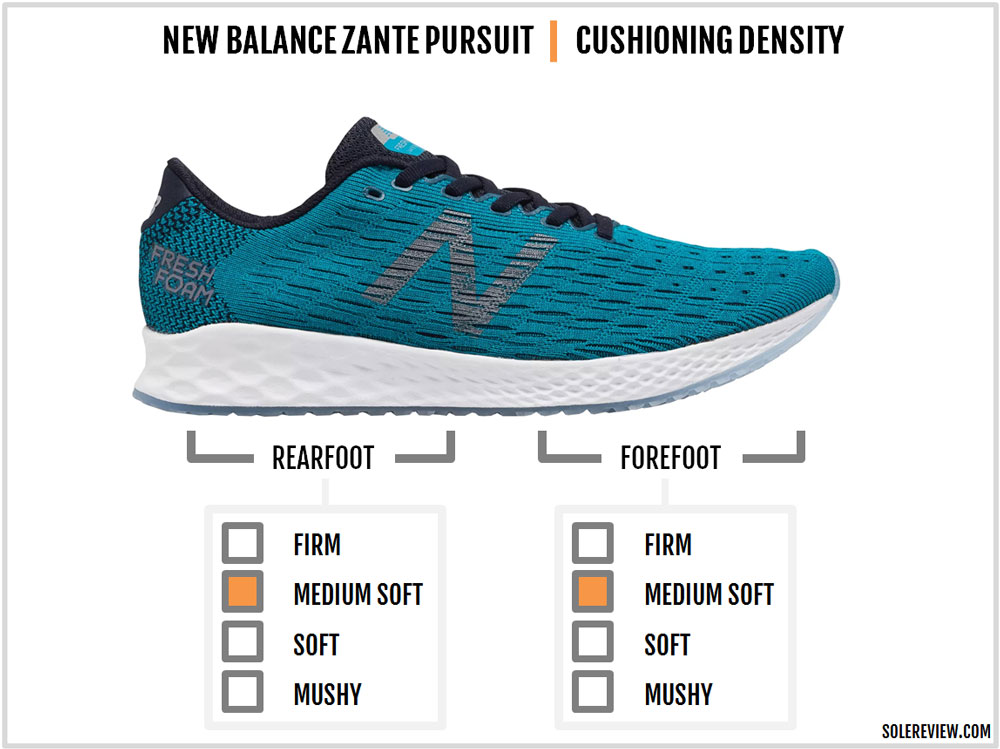 The rearfoot lacks the concealed foam coring but has raised sidewalls. The lasted upper sits inside the midsole rather than atop it. So functionally speaking, the 6 mm drop midsole is actually thinner than what it seems.

It is this tapered, barely-there foam stack which defines the Zante Pursuit. The cushioning is protective enough for up to 10 miles. For anything longer, one wishes that there was more foam underfoot. Of course, when saying this, we exclude runners who are accustomed to running marathons in the racing flats. 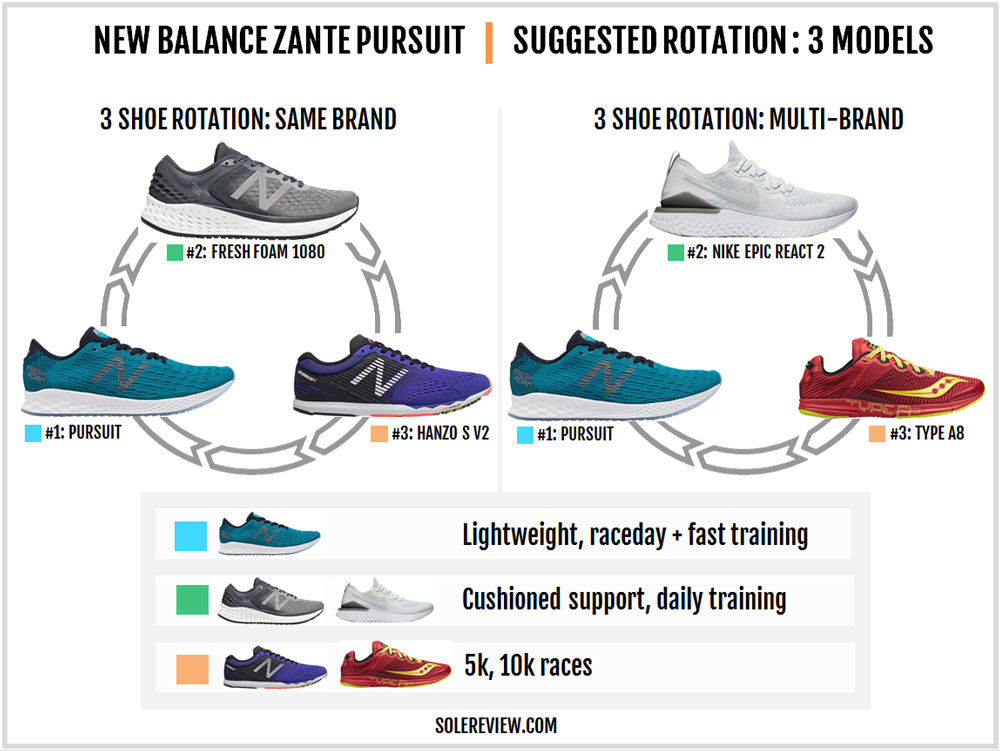 The Zante Pursuit is ideal for fast training runs and 10k races. The midsole has enough cushioning to make runs up to a certain distance comfortable. The low midsole stack made of just Fresh Foam makes the ride smooth and fast.

In the Pursuit’s case, having a couple of other rotational shoes is a necessity and not a choice. For example, the 1080V9 or Nike Epic React 2 can be your long-distance running shoe.

And while you don’t actually need a road racer when you have the Pursuit, but models like the Hanzo or Saucony Type A8 work great for 5K – 10K races.

The reasons why you don’t really need a racer is because the Pursuit (aptly named, by the way) is fast enough. Apart from the thin midsole doing its part, the new outsole is a factor too.

The bottom is covered with a single piece of translucent rubber – which is the new industry trend, by the way. There are no grooves splitting the outsole into different sections; the entire surface is just a dense group of raised lugs.

The single piece design of the outsole also means that the flexibility isn’t what you expect of this low-profile shoe. The difference between the rubber and foam densities also gives the cushioning a firm tinge.

On the other hand, the rocker shaped front combines with the relative rigidness of the outsole to make transitions swift before toe-offs. The uniform geometry is also a good fit for ground contact foot-strike.

And if you’re planning to run on treadmills, then the Pursuit is a great pick. The low-profile cushioning, the rubber outsole, and a snug upper are exactly what you need.

The translucent rubber has less bite than standard issue materials on wet roads and pavements, but other than that, there are no complaints. 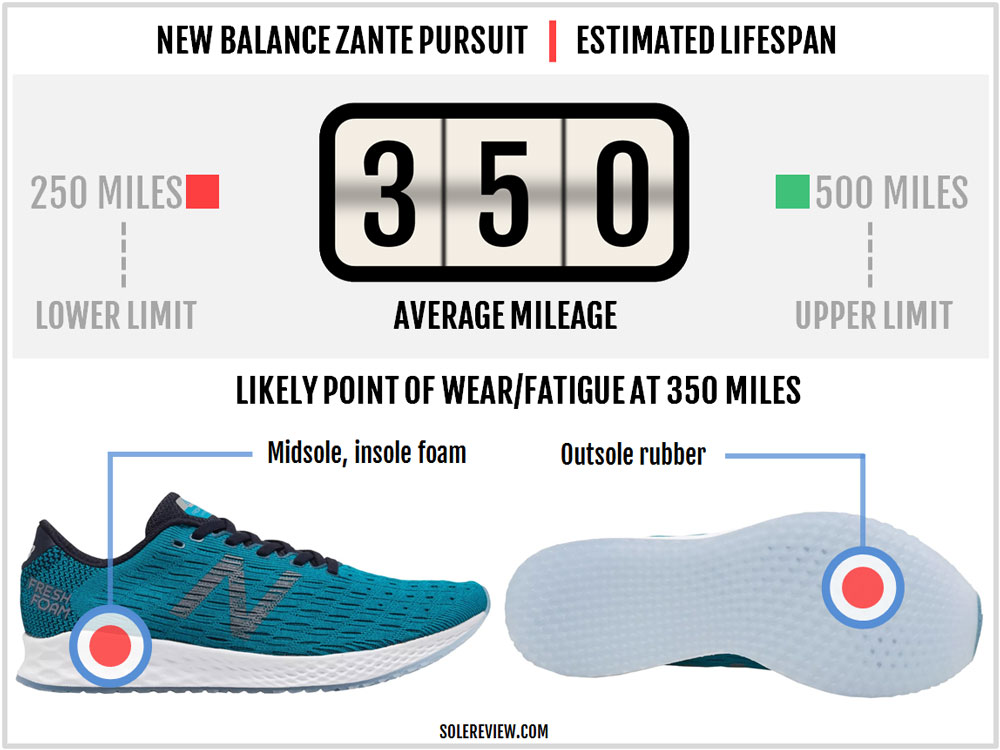 One characteristic of the semi-transparent rubber is its durability. Of late, variations of this compound are being used in many Saucony and Brooks shoes with favorable outcomes on lifespan.

Our feedback on the Zante Pursuit is similar – the outsole is durable while parts such as the soft midsole and insole will undergo regular wear and tear.

The Zante Pursuit’s upper fits like a corset – snugger in the center than the rest of the upper. The toe-box is actually spacious for this shoe class, but as you come closer to the midfoot, the level of narrowness is dialed up.

The gusset holding the padded tongue also contributes to the conforming fit as it wraps around the midfoot. It’s an interesting combination (also on the 890V7) though – a standard quilted tongue and reinforced eye-stay on an otherwise minimal knit upper. The flat laces do their job well and fit flush over the upper. 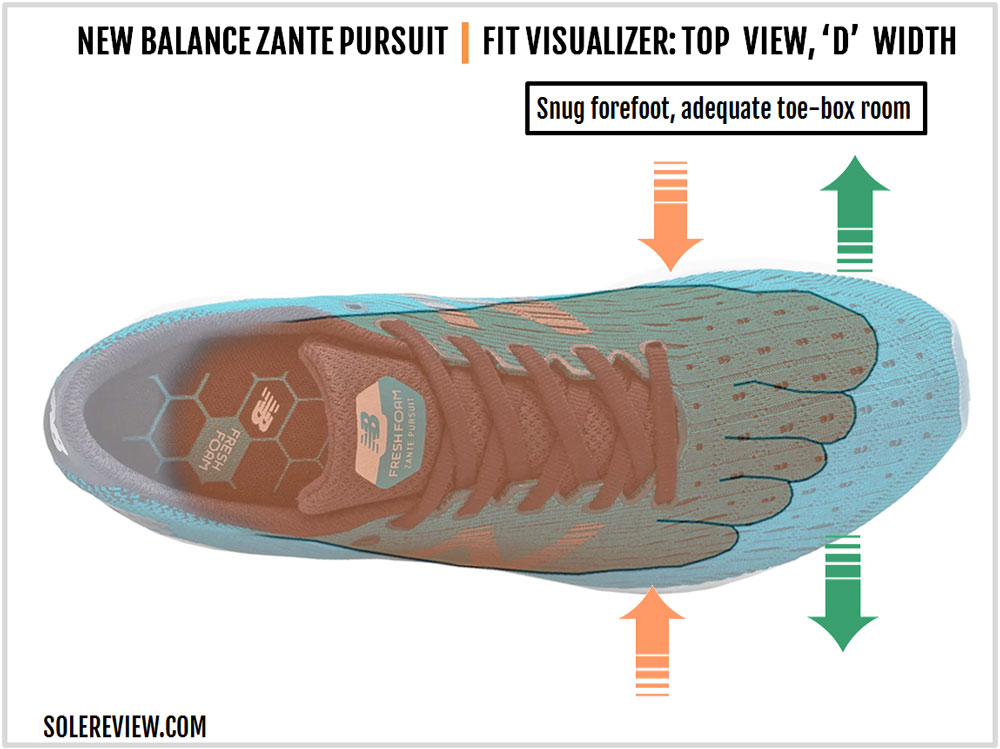 The snug upper befits the Zante Pursuit’s stated positioning. The stretchy upper locks the foot down during faster runs; at the same time, you’re spared the struggle of wrestling for toe space. Although, one can get more room inside the optional 2E (wide) variant.

The toe-box has a shallow ceiling but it doesn’t feel like it – thanks to the accommodating mesh. Because of its hourglass fit, the Zante Pursuit feels longer but actually fits true to size. 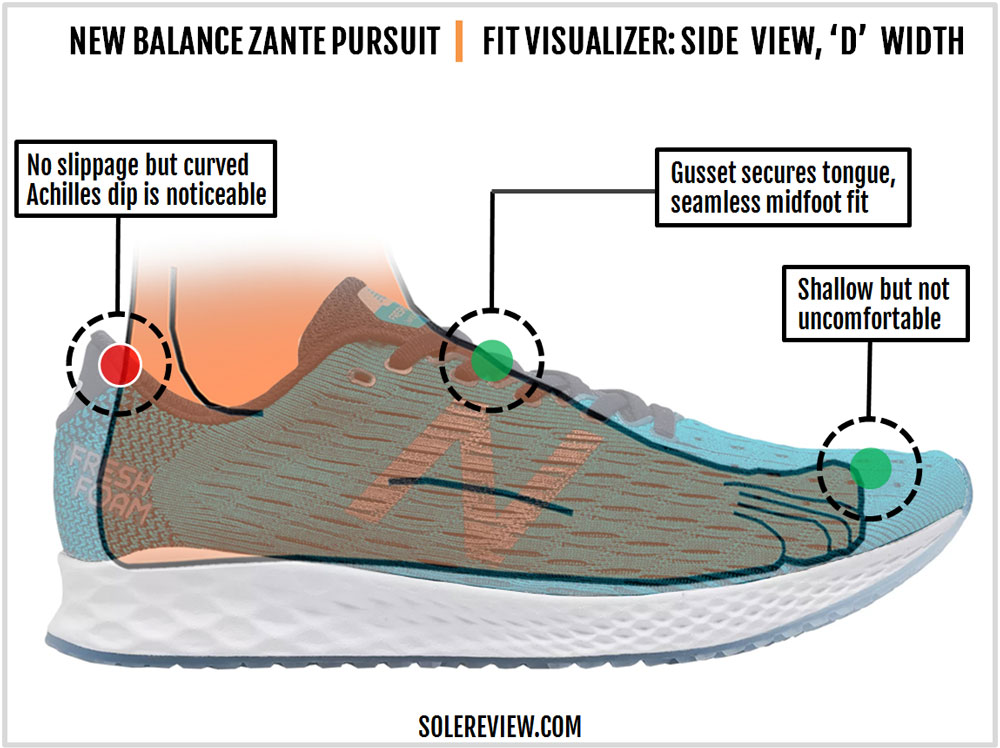 The heel fit, while secure, isn’t exactly the epitome of excellence. There’s not a lot of collar foam padding but that isn’t the issue – the inwards curve is. New Balance is beginning to tinker with its heel design and the results are less than perfect on both the 1080 and the Pursuit.

The Pursuit should have borrowed the Zante V4’s standard Achilles dip – that would have been a safer choice. For most runners, the Pursuit’s heel fit should be ok, but some will find the curvy collar not to their liking. 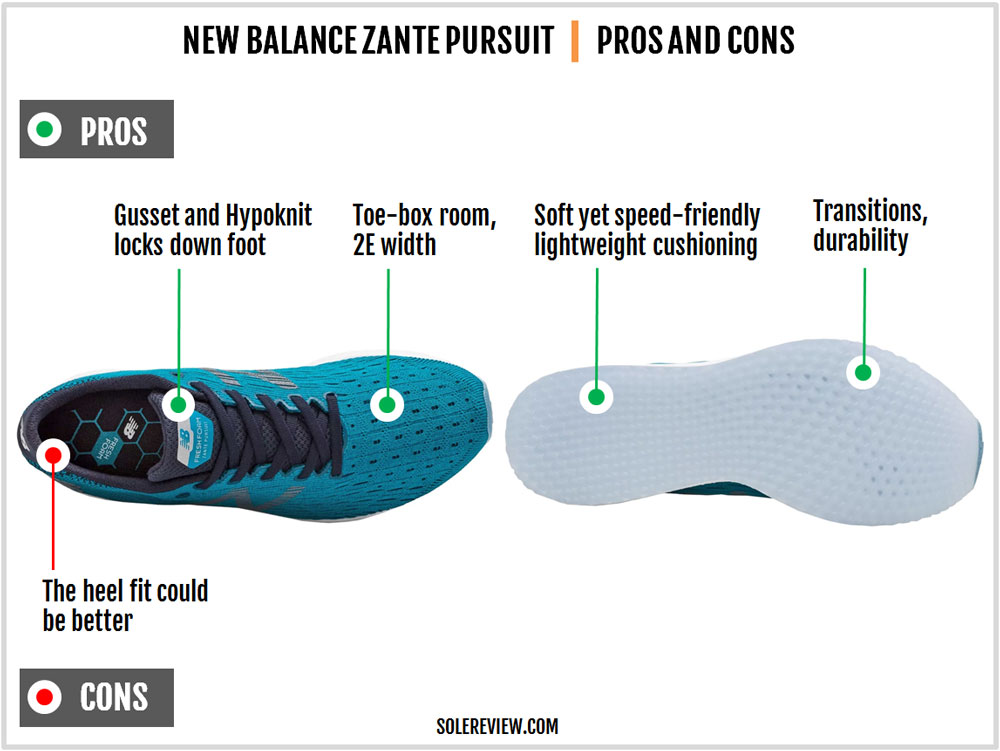 The Zante Pursuit is the quintessential fast shoe. The new Fresh Foam midsole is soft yet low-profile for a perfect blend of speed and comfort. The thin outsole adds longevity and support for efficient transitions. And its low weight just makes its case stronger as a speed shoe.

Above, the knit upper stretches nicely to hug the foot without hot spots or needless garnish on the outside. The insides are smooth, and the engineered mesh structure vents nicely. 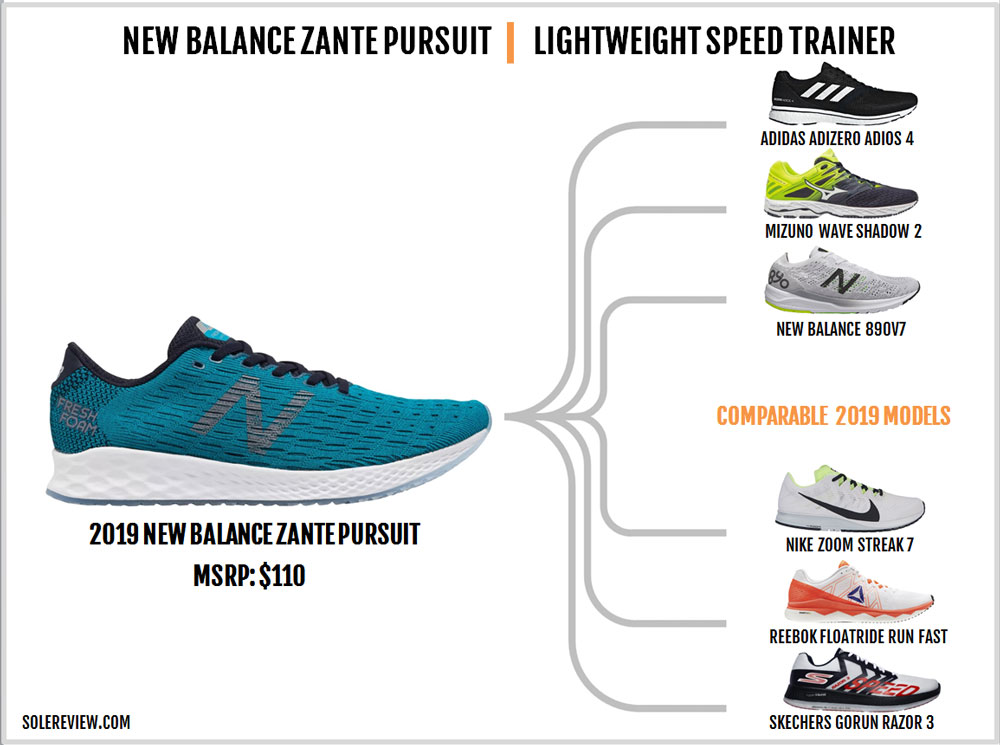 Not a lot of shoes compete directly with the Zante Pursuit – at least not with a similar form factor. Hence, this section is an eclectic mix of shoe choices, ranging from lightweight trainers to road racers.

Let’s look inwards first. The New Balance 890V7 isn’t in the same class as the Pursuit due to its much firmer ride. But it is a great fast shoe with greater versatility. The midsole is noticeably firmer than the Pursuit but has more foam underfoot which is better for longer distances. It has near-identical specs as far as the drop (6 mm) and the weight are concerned.

The Skechers GoRun Razor 3 Hyper is a speed running shoe with enough cushioning to push longer than most road racers. The Nike Zoom Streak 7 is a lightweight racer without the jarring flatness of a purist racer. If you like low-profile cushioning in a Mizuno, the Wave Shadow 2 is a sensible buy.

As you can see, none of these shoes is a close match with the Zante Pursuit. But if you need something similar in function but in a different form, this guide is a good place to start.