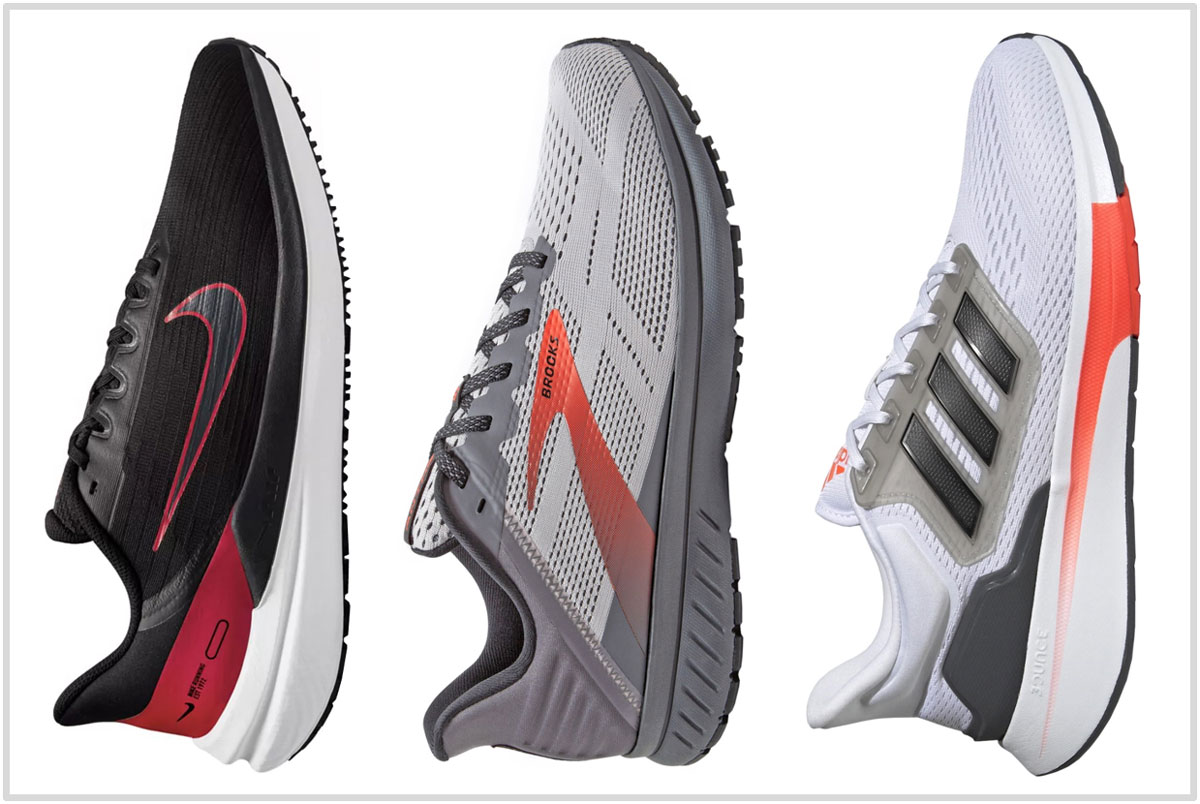 This article has been updated with current models for December 2022. The Nike Winflo 8 has been replaced with its updated version. The Brooks Anthem 5 is a new addition. The Asics Hyper Speed and New Balance 680V7 have been removed.

There’s never been a better time to buy a running shoe.

Shoe brands are releasing new products at a never-seen-before pace. And this doesn’t just apply to the top-tier running shoes with their Carbon plates and lightweight midsoles; even the sub-$100 segment is getting the attention it deserves.

For a very long time, entry-level models were a reluctant afterthought for running shoe brands. Except for shoes like the adidas Duramo, Saucony Cohesion, and Nike Downshifter, there weren’t many popular go-to products at double-digit prices.

In the past, entry-level prices also meant an entry-level material and technology package. The midsole was always a standard EVA foam block, and the upper designs were basic. 10 years ago, the situation was so dire that even a $100 shoe stank badly.

That has changed for the better.

At the time of writing this guide, many brands offer a slew of budget products. adidas had a credible under-$100 assortment to begin with, and there’re now many new models to choose from.

The Gel Contend used to be the only Asics running shoe (under $100) worth mentioning. It’s still in the line-up, but let’s be honest – the ultra-basic Contend 7 is visually disconnected from the new breed of Asics running shoes like the Novablast and Metaspeed Sky.

The technology ‘trickle-down’ is a strategy that Nike has honed into an art form.

Nike products like the Winflo 9 lean heavily on the more expensive Pegasus for inspiration. Similarly, the Flex Experience 11’s design is based on the Nike Free.

So while running shoe prices can be downright ridiculous, there are plenty of competent models under $100.

And yet, most of the running shoes we hear about are expensive models. Brands spend their hype dollars on premium products, so the value assortment rarely receives marketing attention.

It’s important to talk about lower-priced running footwear because not all countries sell shoes at the same (US) retail prices.

A shoe priced at $100 stateside could cost $130-160 in international locations depending on the import duties and taxes – and that’s before taking the potential difference in purchasing power parity into account.

In other words, the same money that gets US-based consumers a brand-new Asics Gel-Nimbus or the Saucony Triumph will only fetch a ‘budget’ running shoe in many countries.

The search for a sub-$100 shoe can get confusing, so we’ve curated a selection of 10 running shoes that retail for under $100. However, the final selling price will depend on the retailer and your location.

We also recommend searching for deals on the older versions of popular trainers like the Asics Cumulus, Brooks Ghost, or Nike Pegasus.

In most cases, the previous model is available for less than $100. It’s worth keeping track of when new models are introduced, because the previous versions usually go on markdown sales around that time. Our release date tracking calendar is a helpful resource.

The Nike Winflo 9 no longer has the word ‘Zoom’ in it, and that’s because it has a new ‘Dot Weld Air’ midsole.

This lightly pressurized Air bag is a rebadged version of the Nike ‘Airliner’ insoles we used to see in the late 90s. As a result, we get a soft and comfortable ride that feels more consistent than the single Zoom Air bag set-up of the Winflo 8.

This Air bag is inside a soft EVA foam midsole, so that makes the Winflo 9 a comfortable and lightweight trainer for everyday runs. This time, the raised midsole sidewalls add support by cupping the foot – a feature that was missing on the earlier models.

The snug upper has a strap-based lacing system for a secure lock-in. However, optional widths aren’t available. Though the Winflo retails for $100, there are usually deals to be had – which effectively lowers its price into double-digit territory.

Nike also sells a water-resistant ‘Shield’ variant of the Winflo 9 for the colder months.

If the $80 EQ21 looks oddly familiar, that’s because its design borrows elements from the Ultraboost. The plastic midfoot cage is inspired by the high-end Boost shoe (our review here), whereas the rest of the upper takes inspiration from the Solarglide and Solarboost.

These trims are not just cosmetic, but functional as well. The flared Achilles heel grips the heel softly without slippage, and the mesh upper breathes well and creates a smooth interior.

The floating-style cage isn’t as stiff as the full version (that comes attached to the midsole), so it delivers functional midfoot support. The sizing runs a mite short and narrow.

Unlike the higher-priced adidas models, the midsole isn’t made of Boost, but of ‘Bounce’ EVA foam. It’s comfortable and stable enough for daily use, and that’s the reason why this shoe features here.

There’s a full rubber outsole for durable traction. However, it’s not a Continental rubber kind. 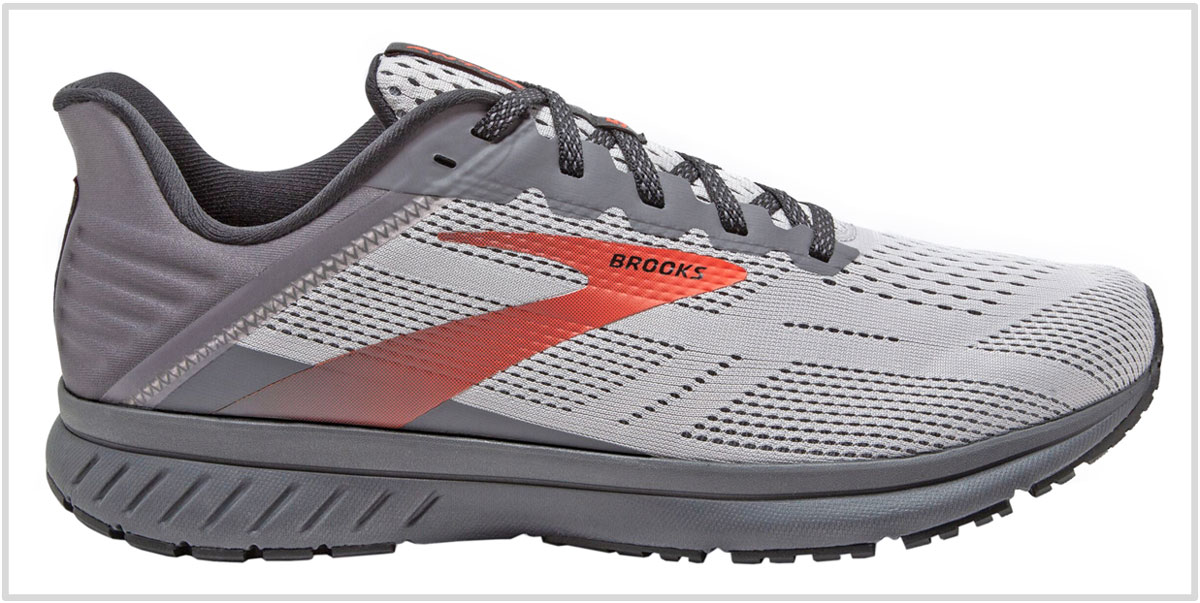 The Brooks Anthem 5 is a basic running shoe that works for mild-intensity runs. Under the breathable and true-to-size mesh upper is an EVA midsole made of Brooks BioMogo foam – a material that was originally used on older versions of the Brooks Ghost and Glycerin.

When combined with the foam insole, the midsole makes the ride comfortable enough for short-distance runs (up to 10K).

The midsole isn’t very thick, so the cushioning has a firm quality to it. Not surprisingly, the Anthem 5 also works for tempo runs at 4:00 min/km (6:30 min/mile) paces.

Overall, the Anthem feels similar to some of the older (and firmer) Brooks Launch models.

The Duramo 10 is still a $70 running shoe, and that’s a rare feat in this period of price inflation.

And this shoe isn’t mere lip service to the idea of a running shoe. While basic, several bonafide features make it a fully functional running shoe for low-intensity activities.

Even though the midsole isn’t made of high-tech materials, the EVA foam stack is sufficiently cushioned for short-distance runs and treadmill workouts. The firm ride and full rubber outsole also make it stable and durable.

The mesh upper is surprisingly well-equipped for its price. The tongue and heel are padded, and the snug mesh shell has a smooth interior with a secure lacing set-up.

adidas has managed to fit in molded decorations over the heel and a variable lacing system too. 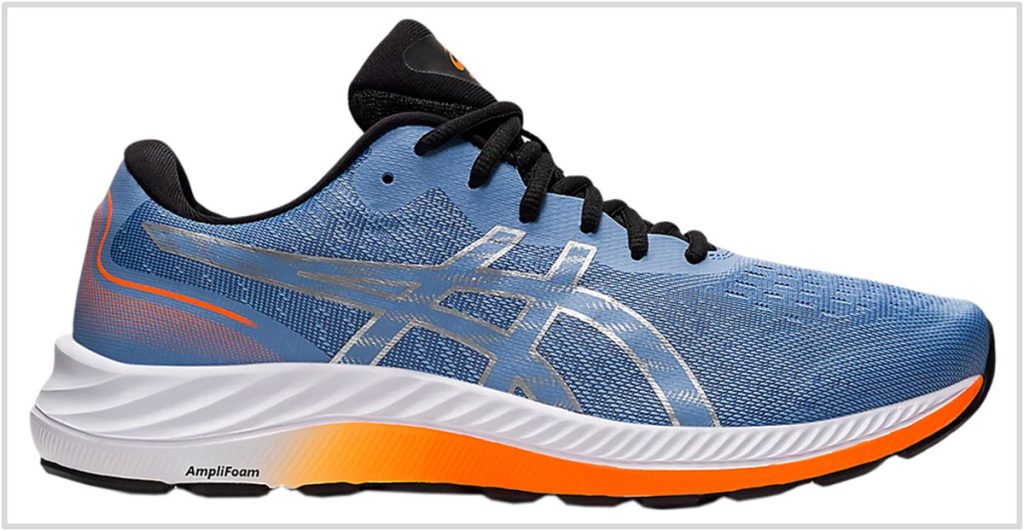 From a ride perspective, there isn’t a lot of difference between the Gel-Contend 7 and the Gel-Excite 9. Both models feature a foam (Amplifoam) midsole with a rearfoot Gel pad insert. Both shoes are fitted with an Ortholite insole.

Though there is a $10 price difference between the two, the Excite and Contend work equally well as neutral daily trainers.

Most of the difference lies in the Gel-Excite 9’s upper design. Using no-sew overlays over an engineered mesh shell results in a (more) contemporary styling while making the interiors smoother than the Contend.

At a suggested retail price of $75, the Asics Gel Excite 9 is excellent value. Last year, the Excite 8 was redesigned from the outsole up, so the Excite 9 is an upper-only update. So it doesn’t matter whether you get the 8 or 9.

Until last year, the Downshifter had a $60 retail price. This year, it’s a $70 shoe – thanks to inflation.

The Downshifter is one of the many sub-$100 in Nike’s catalog, and has been around for nearly a decade. It is one of Nike’s best value-for-money performance running shoes. The Nike Dart used to be the ultimate no-frills shoe but it was discontinued (in 2017?) after 12 long years.

It feels like a long time, but the Dart was originally a $45 running shoe, and a pretty good one at that. Anyway, we digress.

There’re no fancy foam components or Zoom Air bags on the Downshifter; just a comfortable foam midsole that is paired with a near-seamless upper. The resulting product is a functional, everyday running shoe.

The no-sew upper has a sleek exterior that uses a thin mesh and fused overlays for support. The midfoot panels are vented to keep the interiors cool during runs. The fit runs a bit narrow, but the Downshifter sells in a wide as well.

The Cohesion has been a regular fixture on our affordable shoe lists. The Cohesion 15 reserves a spot in this guide as well – it is an excellent budget shoe with very little to dislike. This isn’t just about the price; the Cohesion 15 is a no-frills running shoe that covers most bases.

The Cohesion won’t win prizes at a beauty contest, but it has a solid and well-fitting (albeit snug) upper, a cushioned and supportive ride, and is durable. And what’s more, the 9-ounce weight makes it pretty lightweight too.

Its $60 retail price gives you more shoe per dollar and is proof that you don’t need to spend a fortune to get a functional pair of running shoes.

And by the way, if you’re looking for a 2E (wide) sizing in the Cohesion, Saucony sells that too.

The Flex Experience Run 11 is heavily inspired by the Nike Free’s outsole and upper design. Most of the original Nike Free line no longer exists, so the Flex Experience is what you should buy if you want the flexible midsole experience.

This geometry delivers a unique quality of cushioning and transitions, as it’s very flexible in the front and supportive under the heel. The ride is also sufficiently cushioned, so these traits make the Flex Experience Run 11 an excellent trainer for everyday runs.

The soft and pliable upper is a perfect match for the flexible midsole. There are no superfluous layers that restrict the range of motion, and the interiors fit smoothly while locking the foot over the midsole.

Think of the Nike Renew Run 2 as a budget version of the React Infinity, except that the midsole is made of EVA foam rather than React.

Regardless of the composition, the foam midsole gets the job done. It’s a cushioned neutral trainer that works for daily runs and casual wear. Inside, the soft insole adds a layer of step-in comfort.

The mesh upper has a snug, yet smooth fit with a plush heel collar and tongue. The molded foam on the outside isn’t functional, but adds a design depth to this budget sneaker. A molded heel cup makes the ride stable by cupping around the foot.

The cushioned midsole is protected by a two-piece rubber outsole for traction and durability.

Do you love the road-going version of the Cohesion but want it in a rugged form factor for trail use? The Cohesion TR15 is just that, and there’s no upcharge – both the road and trail Cohesions are priced the same.

The TR 15 has an identical upper and midsole design as the road Cohesion but with an outdoor-oriented outsole and a denser mesh.

Due to the road-biased design, the TR15 isn’t meant for technical trails but should be limited to unpaved flats and gentle slopes. We also view the Cohesion TR15 as a budget-friendly road-trail hybrid.

Otherwise, the Cohesion TR15 has a ride and upper fit character that’s nearly identical to the road model. The layered upper is protective with a snug fit, whereas the EVA foam midsole has adequate cushioning for mild off-road use.