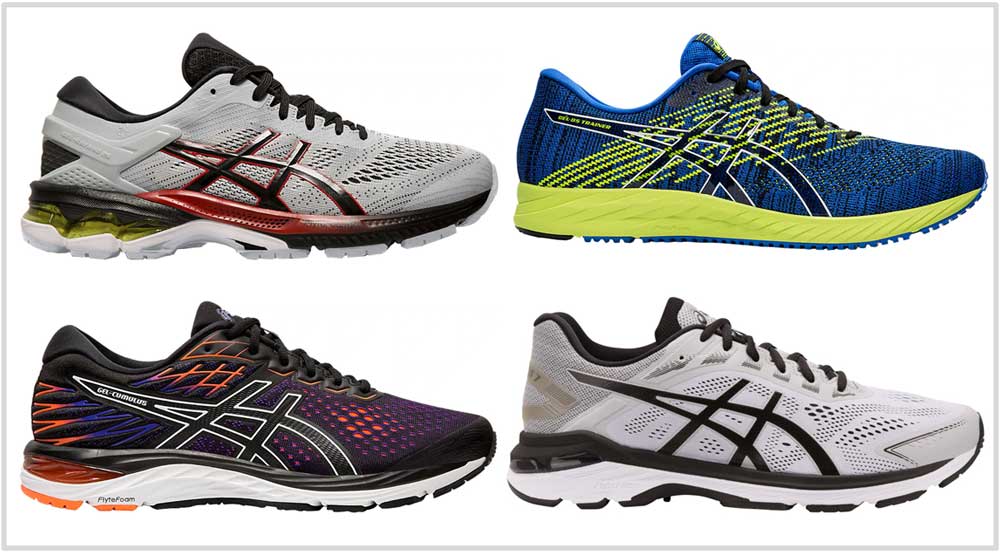 When you look at Asics’s and Mizuno’s running shoe line, one almost feels their pain. The pain of having to leave behind their 12-ounce Gel-Trusstic-Guidance Line legacy behind to compete with the new world. A world where cushioned running shoes weigh less than 8 ounces and last forever.

Even this guide has at least three shoe names with the suffix ’20+’ in them. In other words, these models have been around for at least two decades.

Asics is a baby-boomer and not a millennial. Its safe path has led it to $3.5 billion in global revenues, but its sales are waning worldwide. In mature markets like North America, sales dropped by 15% – which is huge. Other territories saw lower sales as well.

In our opinion, sticking to a safe product line isn’t a problem. Lots of consumer durable brands follow this strategy with great success. As long as Asics gradually improves its core line, it remains a safe refuge for runners who do not appreciate the fickle nature of shoe updates.

They generate half a billion dollars of revenue just by selling 11-ounce Glycerins, Ghosts, and Adrenalines. Brooks running shoes aren’t the finest examples of the latest and greatest, but they stay very consistent in what they do best.

If Asics had done the same, they would be in a very good place. But Asics is confusing change with improvements. Not all changes are necessarily for the better.

Asics tried once to force-fit ‘newness’ into their line many years ago. The resulting 33-series was very unremarkable and forgettable. This time is no different. Even venerable old-timers such as the Nimbus and Kayano are not safe from Asics’s misguided attempts to ‘improve’ their core models.

For example, plugging Flytefoam into everything isn’t the answer. Nor does making the upper narrow do any favors for Asics loyalists. The Nimbus does not need a firm Flytefoam midsole; it needs to return to the soft, pillowy experience. The Nimbus 21, as you must have noticed, got a low review score on this site. That’s the reason why it is not included in this guide.

Even the Metaride is a Metarun redux. A similar upper built on a recognizable Asics design template; a layered midsole with a modified Gel and toe-spring. Rather than stepping into uncharted territory, ‘new’ Asics shoes merely redecorate what already exists.

And you thought that today was all about best Asics running shoes? Good luck with that. We’ll try our best not to sound too cynical though.

There is hope in the future, though. The recently released Asics GlideRide has received praise elsewhere (we’ll have our review soon), and some of the uppers on the recent releases – be it the DS-Trainer 24 or the Dynaflyte 4 – are functional and visual improvements.

We’ve prefixed the shoe models with the various categories they represent. If you’re an Asics loyalist, you’ll recognize most of these names. Except for the Roadhawk FF, these models have been around for many years.

On paper, the Gel-Cumulus 21 is a watered-down Nimbus with fewer bells and whistles. In the real world, it is a better neutral trainer for a lower price. Not only it is lighter and cheaper than the Nimbus, but its more comfortable ride makes it a better choice for most runners.

The Dynaflyte 4 is like a neutral version of the DS-Trainer, and that makes it a tempo-friendly trainer without a medial-post. The ride is (still) pretty firm though – an aspect that makes transitions efficient. And while the exterior of the sole is identical to the Dynaflyte 3, the D-4 is lighter by an ounce.

The new upper is much better than the last version. The true-to-size mesh upper fits smooth while locking the foot in place during speedier workouts. The upper isn’t bereft of plushness; the heel and tongue provide plenty of that.

The Roadhawk FF is a recent addition to Asics’s running shoe line – it’s been around for less than two years. The Roadhawk FF 2 is as non-Asics as gets; a single-density Flytefoam midsole is attached to a no-frills mesh upper with a nice fit.

The midsole offers distraction-free cushioning for a wide range of runs. It’s not too firm nor soft – in a way, the Roadhawk is a Brooks Launch equivalent but a mite softer.

With a retail sticker of $100, the Roadhawk FF 2 is reasonably priced too. 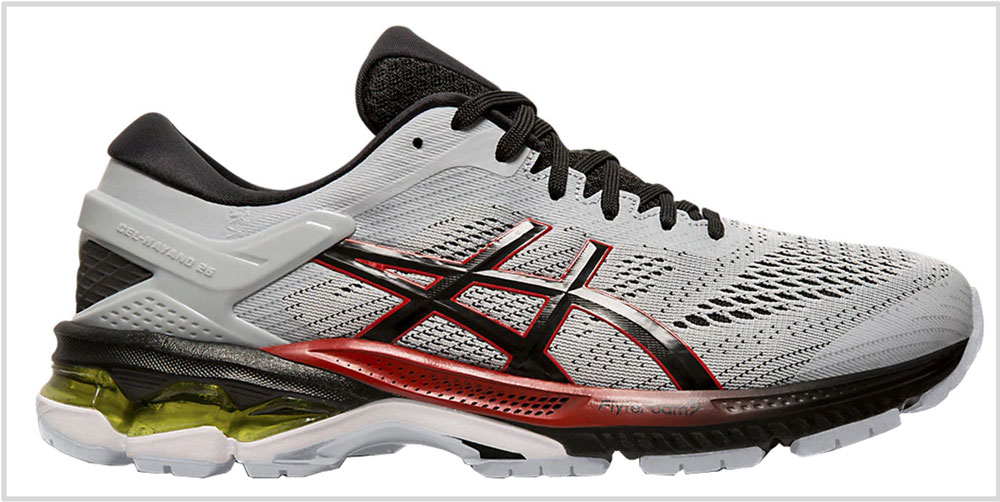 You have to be living under a rock if you haven’t heard of the Kayano before.

This is the longest continuing shoe series with a firmer medial post. The midsole wedge design isn’t in-your-face kind like it once used to be.

The Kayano 26 has a slight motion-control quality associated with shoes of this class. The rearfoot Gel units are larger on the 26 than on the 25 so there’s a small increase in the midsole bias. The K-26’s forefoot doesn’t have the guidance line splitting it down the center so the take-offs and transitions are better.

The ride is firm and the redesigned upper is plush and fits shorter in sizing than the 25. The Kayano 26 is also sold in a wide and extra-wide version.

What the Cumulus is to the Nimbus, the GT-2000 7 is to the Kayano. The GT 2000 7 is a part of Asics’s motion-control line-up, except that there’s slightly less of everything versus the Kayano. That’s not a bad thing; being an ounce lighter makes the GT-2000 more agile and versatile.

Unless you crave the plush interior and softer rearfoot of the Kayano, the GT-2000 makes a good case for itself. It handles daily training and long-distance runs without over-correcting the gait.

In the past, the GT 1000 used to be a cheaply built running shoe with an industrial smell. Not anymore; Asics has made significant improvements to the fit and feel of this sub-$100 stability trainer. Therefore, not only is the GT-1000 8 an affordable support shoe, but it is also good value for that price.

If you want a stability shoe with a near-neutral ride, then the GT-1000 8 should help. The small medial post does not induce a noticeable motion-control feel to the ride character. The cushioning isn’t overly firm so you get all the comfort you require for mid-distance workouts.

It’s easy to see why the DS Trainer has been a popular choice for over two decades. The sub-9-ounce shoe is an excellent shoe for fast training.

With the latest update, the DS-Trainer 24 turns into a case of win some, lose some. The forefoot outsole loses the Dual-Stenciled lugs and has less bite than the 23.

On the other hand, the outsole provides an improved connection between the forefoot and the rear so the transitions are improved. The forefoot also loses the guidance line for improved push-offs. A tiny wedge of firmer foam is co-molded with the Flytefoam midsole for inner side support.

Asics doesn’t sell many road racers outside the Japanese market, so the Tartherzeal 6 is the one you get if you want an Asics.

The $140 retail sticker is pricey for a shoe this category, but the Tartherzeal gets several things right. The forefoot outsole has an aggressive DSP (Dual-Stencil Process) geometry for superior traction, and the Flytefoam midsole allows the shoe to weight just 5-ounces.

Within the Asics assortment, the Kahana 8 represents good value. This trail-running shoe has an outsole design geared for light trails, and the layered upper helps keep the debris out while providing support.

But here’s a disclaimer. Buy the Kahana only if you want to stick to Asics. Else, similarly priced trail shoes from adidas, Nike, and New Balance do a superior job.

The Kahana’s upper materials feel very basic when compared to adidas and Nike. Asics has always made decent, but never great trails shoes. Even the more expensive Fujitrabuco 6 or the BOA lacing equipped Fujirado are lacking in features when compared to the competition.

At best, the Kahana is meant for light trails because of its split outsole design. For a little more over the Kahana, the GT-2000 7 trail is also a decent option for mild trails. It has the comfort of the road-going GT-2000 7, but with a slightly grippier outsole.