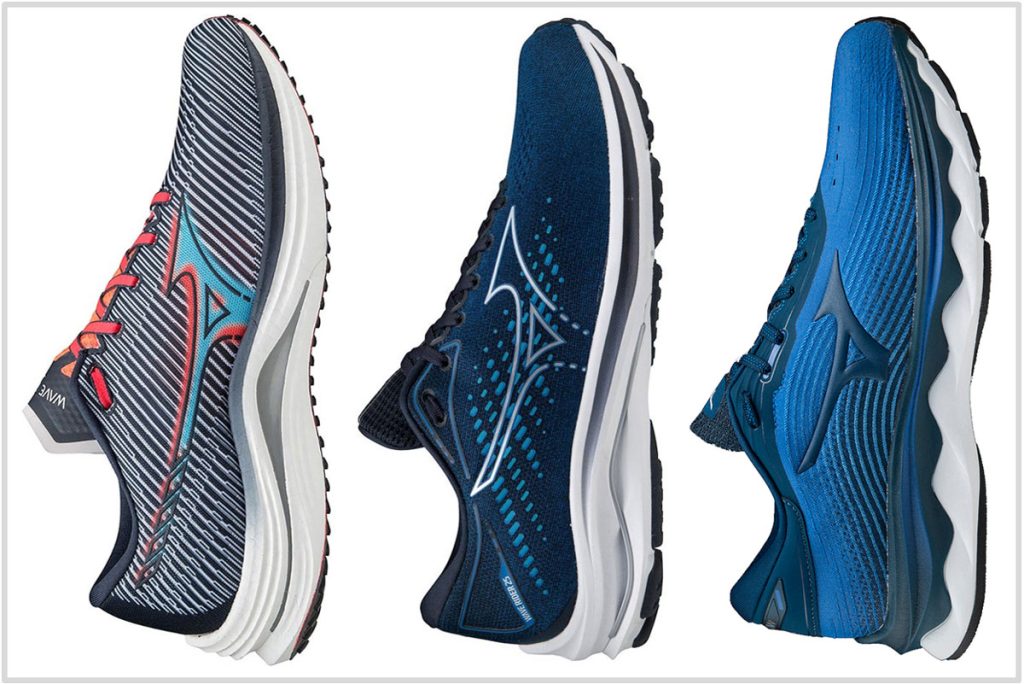 This article has been updated with current models for May 2022. The Inspire 17 has been replaced with its updated version.

Mizuno sells a vast assortment of shoe models, running included. But not in Canada. Or the United States. For that matter, not in Australia, Europe, New Zealand, or the UK.

It’s only in Japan where Mizuno is in its best form.

In Japan, Mizuno sells the Wave Sky Rise, Wave Aero, Wave Bolt (aka the Revolt), Duel Sonic – shoes that are alien to the rest of the world.

Even the new Wave Shadow 5 is there, along with updated versions of the trail Hayate and Daichi with their Michelin rubber outsoles.

And we’re not even talking about non-running categories (baseball, casual footwear) that Mizuno so diligently services in the Japanese market.

We’re not sure why Mizuno offers a fraction of its shoe line outside its home base. Could it be insufficient market demand, since Mizuno shoes are an acquired taste? Are retail channels harder to get into?

But that doesn’t make sense. If most retailers stock the Rider 25 and Inspire 17, then what’s stopping them from stocking Japan specials? Other brands have done it in the past. New Balance sold the Hanzo S, and adidas has retailed the Takumi-sen from time to time.

If you ask Solereview, Mizuno’s Japan exclusives are a perfect fit for a couple of important gaps in the international running shoe market – including North America.

The first would be traditional racing flats. Most brands have moved on from flats to cushioned racers with plates in them, so Mizuno is perfectly positioned to fill that market void.

Many runners will gladly pay a premium for their made-in-Japan models like the Wave Emperor 4 and Wave Cruise.

Even if they are priced at $180-200, these fully-loaded racing flats will have takers. It would be worth importing a few hundred pairs into the US, CA, EU markets to gauge their performance.

The second category would be speed-oriented trail running shoes like the Mizuno Hayate and Daichi 4.

There aren’t many of those around either. The now-discontinued New Balance Leadville was such a popular trail shoe for a good reason; it balanced a speed-friendly ride with cushioned proprioception.

At the time of publishing this guide, only the adidas Terrex Speed Ultra fits that description.

We also see a couple of other Japanese Mizuno shoes we like. The Wave Bolt (Revolt) would be an excellent New Balance Beacon 3 competitor, and the Wave Sonic would do well as a lightweight pacer. Those types of running shoes are also in short supply.

Whatever the reason, the entire Mizuno running shoe line outside Japan can be distilled into less than half a dozen models. Those would be the evergreen pairing of the Wave Rider 25 and Inspire 18, along with flankers like the Horizon 5 and Wave Sky 5.

The Prophecy and Creation are dinosaurs anyway, so their absence is no great loss.

So if all that’s new is the same old, is there anything we can look forward to in 2022?

We did not feature the strange-looking $300 Mizuno Enerzy on the last edition of this guide, and it doesn’t show up this time either.

Having said that, the Wave Rebellion is featured here. It has a new midsole made of the Mizuno ENERZY LITE – a material that resembles Saucony’s Pwrrun PB. 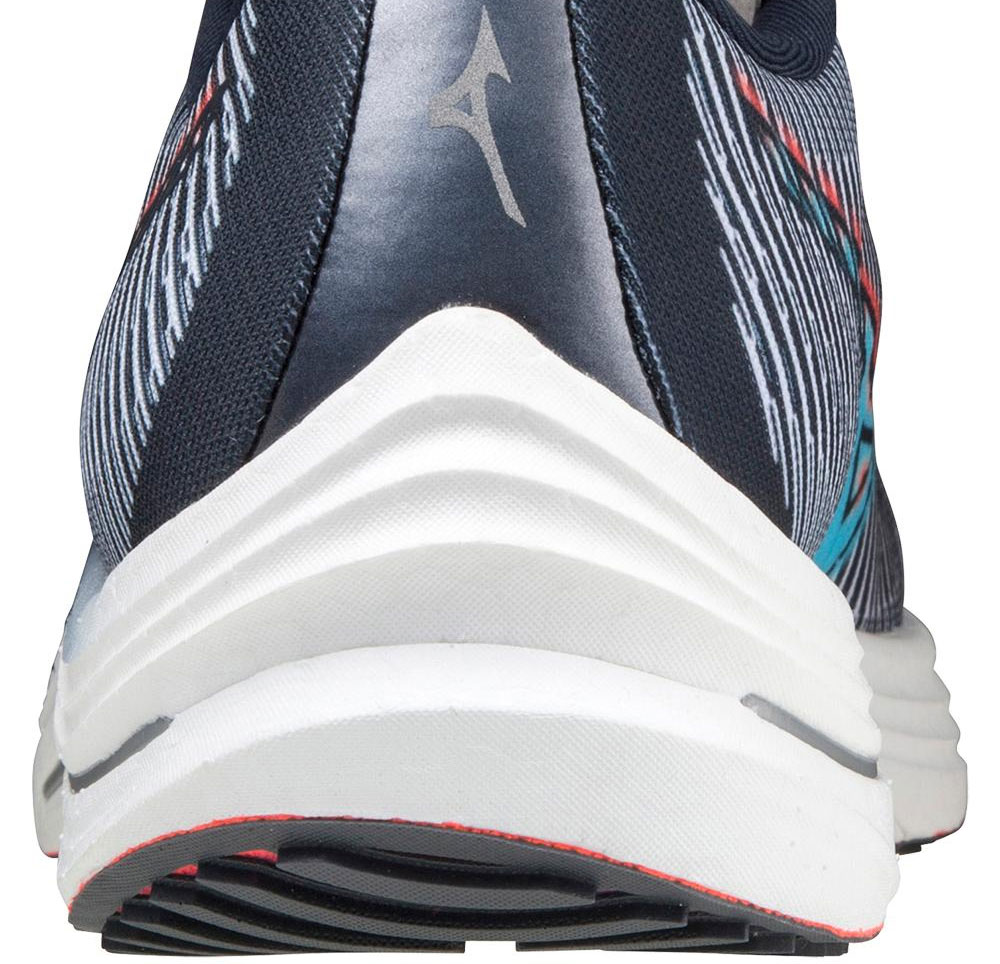 Not your regular plated shoe, this Rebellion.

However, the ride has a slightly different flavor than other plated PEBAX foam shoes because of the stiff ‘Wave’ plate.

For Mizuno, it’s worth pointing out that the ‘support’ and ‘neutral’ tags aren’t the same as other brands. Mizuno hasn’t used a medial post in over a decade, so any categorization is determined by the design variation of the Wave plate. Even this area of distinction is a moot point now, given how Mizuno is swapping the Wave plate for foam.

The Inspire is supposedly a ‘support’ shoe because of the Wave plate’s (more) rigid build on the medial side. While that is true for the Inspire 18, even the Rider 25 is equipped with a medially-biased Wave plate.

In short, when it comes to Mizuno, ’support’ and ‘neutral’ aren’t binary choices. You can trade one for another and be none the worse for it.

This curated guide distills Mizuno’s catalog into just five models. Note that there’s no trail or racing shoe here – unless you live in Japan, that is.

The 25th version of the Rider still has most of what makes a Mizuno a Mizuno. The side profile has the plastic Wave plate sandwiched under the rearfoot.

Turn the shoe over on its outsole, and that’s where things get interesting. The midfoot no longer has the shank that previously used to be a part of the Wave plate. The 25 has a much smaller Wave plate and a softer midsole.

As a result, the Wave Rider 25 (along with the 24) is a much softer version of the earlier versions.

Sure, the Wave plate under the heel delivers a familiar sensation. At the same time, something’s different. The new Rider feels good to go right out of the box; there is no break-in required. Even the forefoot is softer and easier to transition through.

Not much has changed on the upper. The fit quality is characteristically Mizuno, meaning that it has a spacious and smooth lock-down with plushness packed into the heel and tongue. The Rider now has an inner sleeve – a feature that had long been missing.

Its changed character increases the softer Rider 25’s appeal to a larger demographic. The pleasing blend of cushioning and support makes the Rider a versatile everyday trainer. 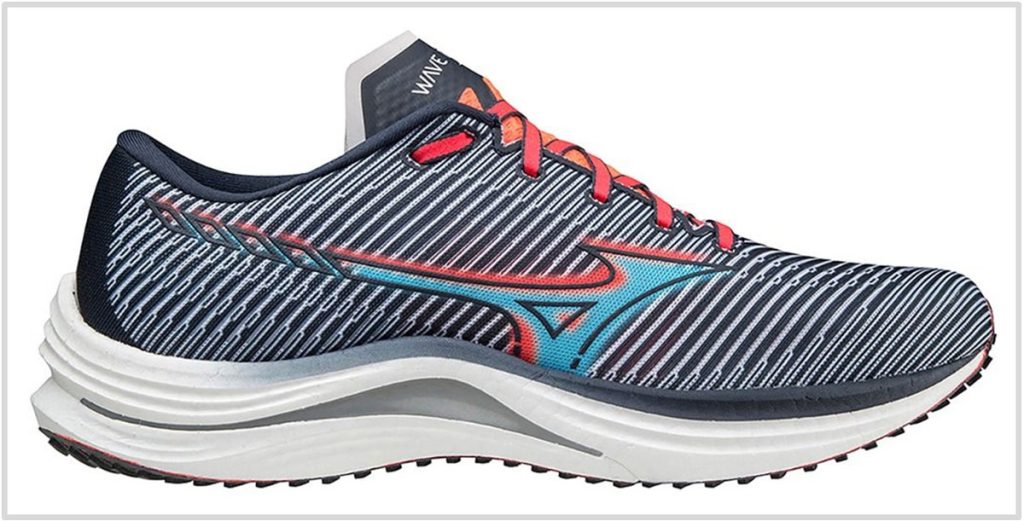 The Wave Rebellion appears to use a PEBAX foam midsole that’s a close match with the Saucony Pwrrun PB in fit and feel, but there’s something very Mizuno about it.

That’s made possible by a rigid Wave plate under the heel and midfoot. This component achieves a couple of things. The first is that it adds rearfoot stability – something that nearly all shoes with PEBAX foam midsoles lack.

The ‘G3’ outsole is a modernized version of a DSP (Dual Stencil Process) sole.

While Mizuno equips the Rebellion with a grippy ‘G3’ outsole, this shoe doesn’t behave like a racer. Given its high stack heights of 38 mm rear and 30 mm forefoot, there’s plenty of mileage-friendly comfort to tap into.

At the same time, the Wave plate adds a firm feel under the heel and midfoot without the ‘snap’ of S-shaped plates that shoes like the Saucony Endorphin Speed and Pro deliver.

The Rebellion’s best use case is that of a cushioned shoe for tempo runs – thanks to its Wave plate that promotes quick turnover. The outsole traction is the best we’ve seen on a plated racer.

The upper is smooth-fitting as well as accommodating – a fit profile that’s perfect for long runs.

In what was an unexpected twist in 2019, the Wave Sky 3 broke away from the tried and tested Mizuno template. Instead of the layered upper and Wave plate (of the Wave Sky 2), the upper had a knit design minus the Wave plate.

Regardless of the sweeping changes, the Wave Sky 3 was a very cushioned neutral trainer with generous levels of ride comfort and upper plushness. The Wave Sky 4 was nearly identical to the 3 due to the shared parts.

The Wave Sky 5 is based on a similar template, so its ride quality feels familiar. The thick foam stack provides plenty of cushioning for the road, and the thick insole adds step-in plushness.

The Wave Sky 5 doesn’t have the characteristic snap of the Wave plate though. Although the Sky 5 is still supportive due to its wide outsole footprint, its all-foam construction isn’t as rock-stable as the Wave-plated version.

There’s not much to say about the upper, except that it is smooth, fits true-to-size, and securely locks the foot down in place.

Even though the inner side of the Inspire 18’s Wave plate has more aggressive ‘crests’ than the Rider 25, both models are suitable for neutral runners. We say this because Mizuno is marketed as a stability shoe – don’t let that scare you away.

Both the models have the familiar underfoot feel that melds everyday comfort with a supportive feel.

The medial side of the Wave plate has a more structured construction than the outer side, and this is what distinguishes the Inspire from the Rider. The upper also has more layering for a higher level of support.

The upper fit is still a Mizuno – you get plenty of room inside along with comfort features such as the padded tongue and feel. The engineered mesh forefoot, fused logos, and overlays produce a smooth interior.

Inside the upper is an inner gusset that holds the tongue in place – something that was missing on versions prior to the Inspire 17.

The Inspire 18 follows the evolutionary path of the Wave Rider to become a softer shoe. The shorter Wave plate no longer forms the midfoot shank; the midsole gap has been bridged with foam and outsole rubber instead.

If the Wave Sky 5 is Mizuno’s top-end neutral shoe, then the Horizon 5 is its stability counterpart.

Till recently, the Wave Horizon had an extra-large Wave plate which gave it exceptional stability shoe manners.

It’s a different story this time. Just like the Wave Sky 5, the redesigned Horizon 5 uses an all-foam midsole. A firmer layer is interlocked with a softer foam, and somewhere within all this is a Polyurethane insert that Mizuno calls ‘Xpop.’

This is a softer Horizon with no trace of the rigid Wave plate.

However, it is a very neutral and supportive shoe that offers plenty of stability. But if you’re looking for the traditional ‘motion-control’ ride experience, you won’t find it in the Horizon. The knit upper fits plushly without any slippage, so nothing’s changed there – at least at a fundamental level.

This shoe is best used as a long-distance plodder or an everyday trainer at slow speeds. After all, this is an 11-ounce, ‘all-frills’ running shoe.

If you’re looking for something more agile, consider the Wave Inspire 17. Even the Wave Rebellion will do.